We met over identical backpacks: This past Christmas our flight from New York to Denver had just landed when the thirty-something guy sitting between my daughter and me pulled out a bag that was the bright yellow version of my black canvas tote. I couldn’t help pointing out our shared taste. Gregory Merkel told me that our Baggu was designed by a RISD classmate of his, which led to the discovery that he’s an architect (and also explained the cool Japanese construction boots).

Within minutes Merkel had disappeared into the crowd, but before that I learned that he’s on staff at ICRAVE, a New York firm specializing in hotel and restaurant design, is married to a fellow RISD-trained architect, and that the two are just finishing up work on a long-haul remodel, their own place in Brooklyn. How could I not ask to take a look? 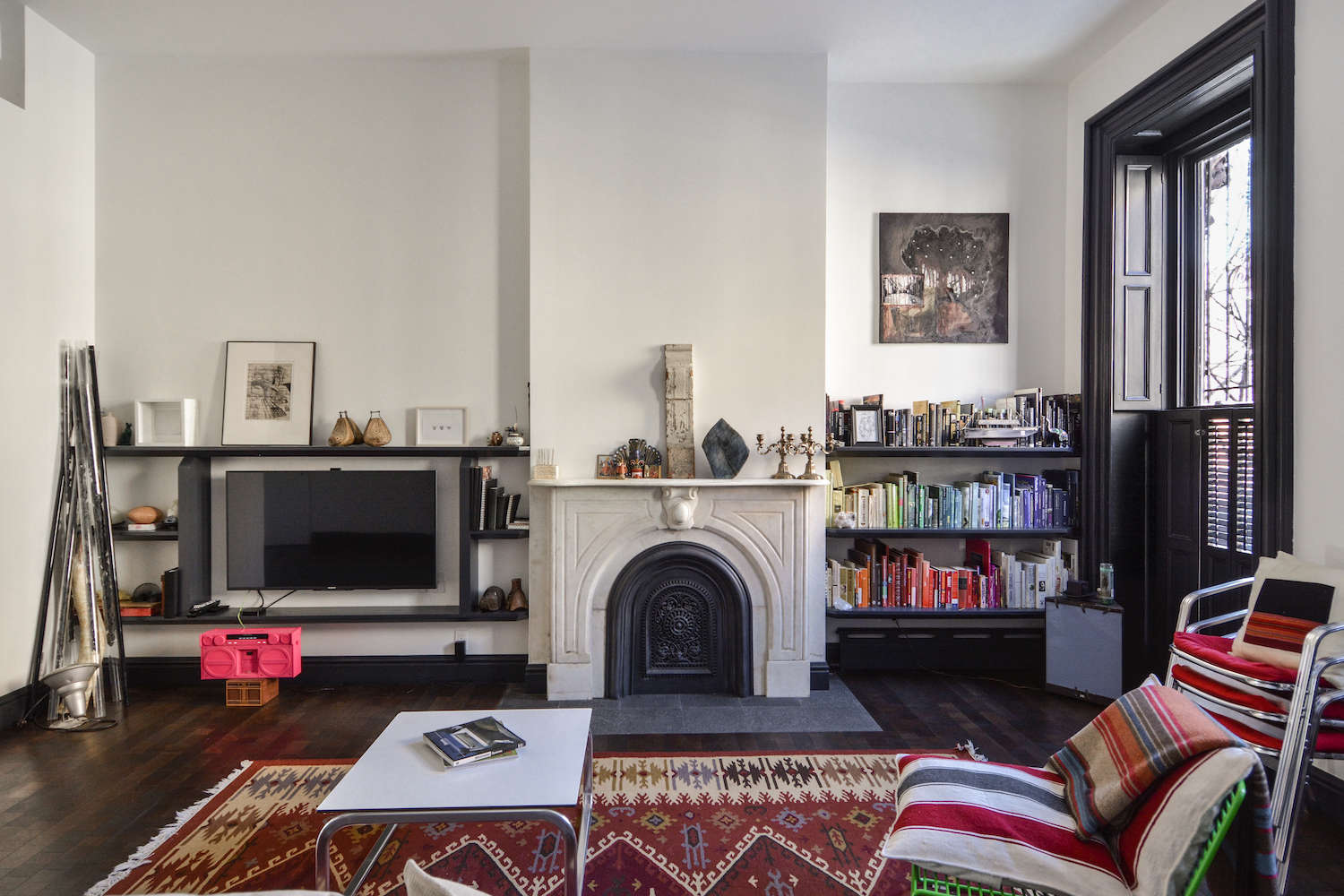 Above: Merkel and his wife, Ana Catalina Rojas, spent two years searching for a Brooklyn townhouse fixer-upper. In 2012, they found their place, a neglected 1890s 18-by-40-foot brownstone on the Clinton Hill–Bedford-Stuyvesant border, and devoted another year to getting all the financing and permitting in order. Then they got to work, doing most of the demo and all of the purchasing themselves, but also working with a contractor and crew along the way. “Our two biggest goals were to update the systems—heating, electrical, plumbing, and, unfortunately, sprinkler—and to convert the house from four apartments into two, a triplex for us with a rental garden apartment,” Merkel told us.

Shown here, the living room with a marble mantel claimed from upstairs (“somehow over the lifespan of the building,” says Markel, “someone thought it was a good idea to rip out the parlor mantel”) and shelves that cleverly frame the TV. “We are architects and wanted to be ‘architecty’ (blow out walls, install huge glass operable window walls), but at the same time, we wanted to honor the history and detailing of the house,” says Rojas, a project manager at Point Design. She and Merkel met on the very first day of architecture school; they collaborated on a house for Rojas’s brother, but this is the first place they’ve created for themselves. 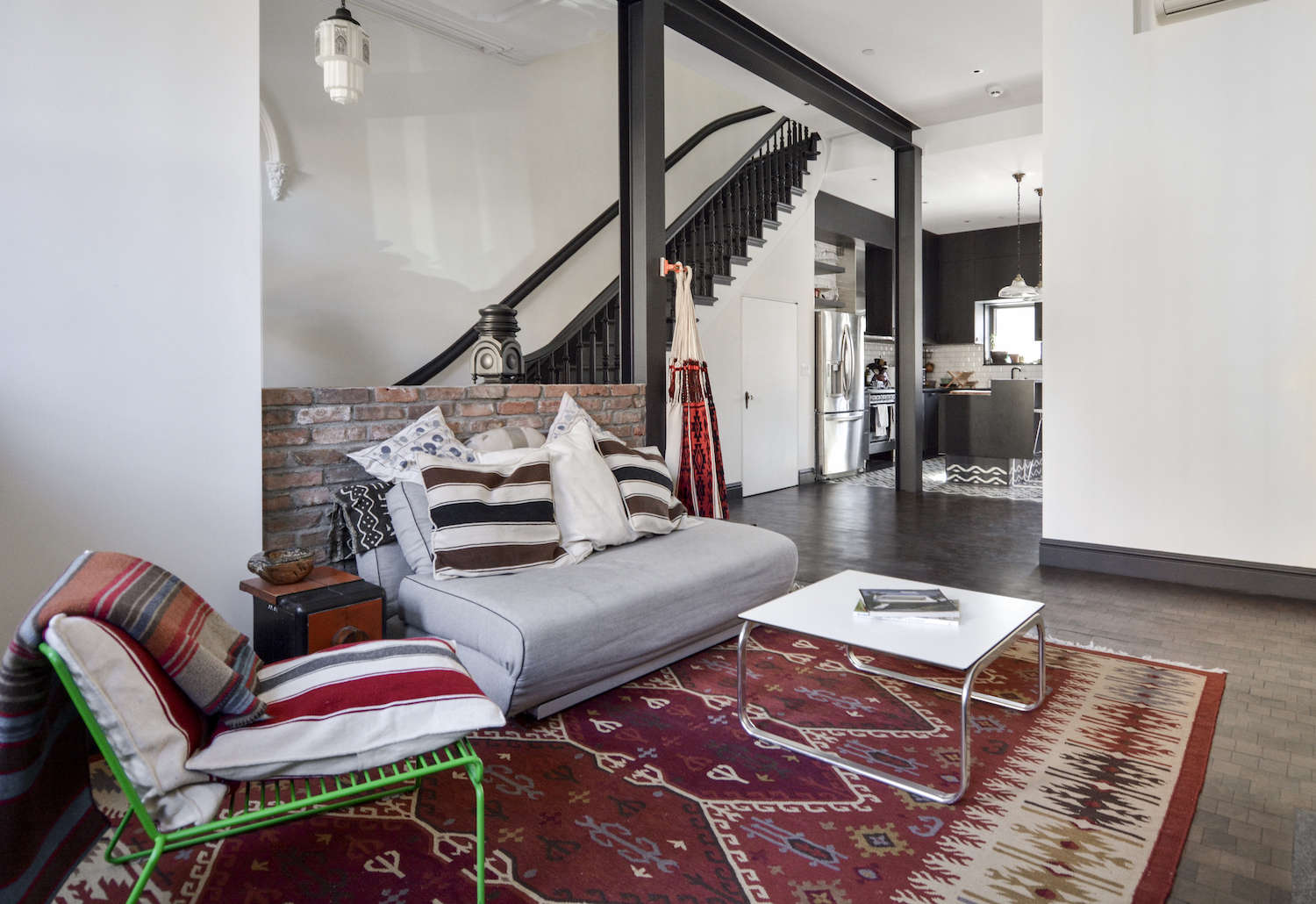 Above: “We went into the design wanting to keep as much as we could, but modernizing the details we ended up changing to have a combination of contemporary and clean [tight reveals around doors, for instance] and original [the large window frame moldings, window shutters, and parquet floors],” says Merkel. “The biggest architectural intervention that our budget allowed for was removing the standard brownstone load-bearing brick wall that divides the entrance area and stairs from the living space. This turned out to be a slightly larger structural project than we were hoping, but it gave us the opportunity to expose and highlight some steel beam and columns. And it’s amazing how much it really opens up the space.”

For furnishings, they’ve been mostly making do with what they already own and layering it with Bolivian weavings—Rojas grew up in La Paz and the two have gathered so many Bolivian textiles that they’ve started a sideline business, Ponchos Rojas (website to come). 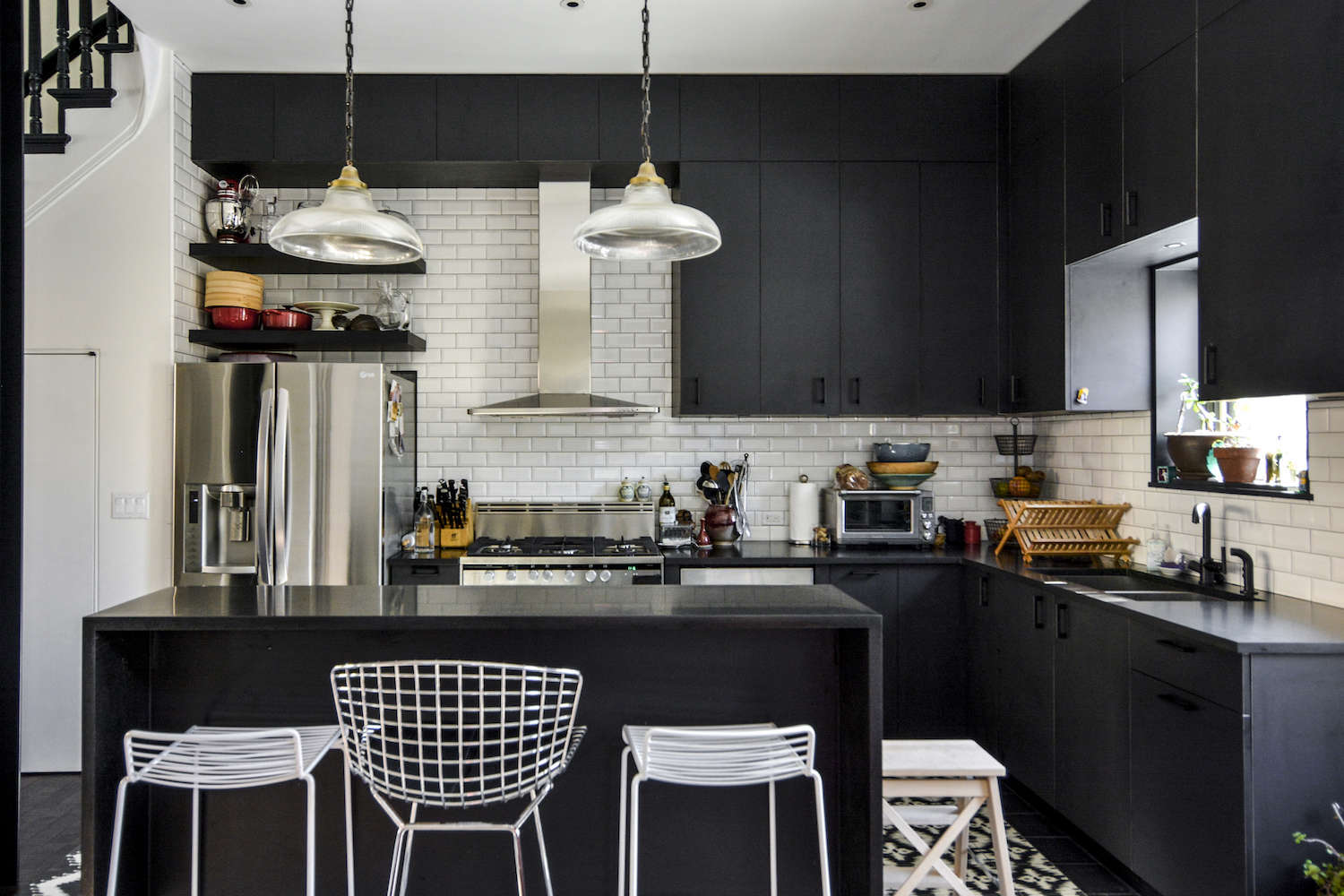 Above: The kitchen began with Ikea white Sektion base cabinets, which the couple fitted with custom doors of Chemetal Magnetic Chalkboard Laminate and Emtek Brass Trail Pulls. The island and counter are absolute black honed granite sourced via their contractor—”for a common stone, it makes sense to get it from whoever your contractor has a good relationship with,” says Merkel—and the beveled-edge subway tiles are Nemo’s Metro Bevel in white gloss.

The counter seating—a Bertoia classic flanked by two Hee stools by Hay—were gathered over the years from shopping at the DWR outlet in Secaucus, New Jersey. The glass pendant lights came from Fed-On Lights Antiques of Saugerties, New York, their favorite source, along with Schoolhouse Electric, for the house’s lighting. 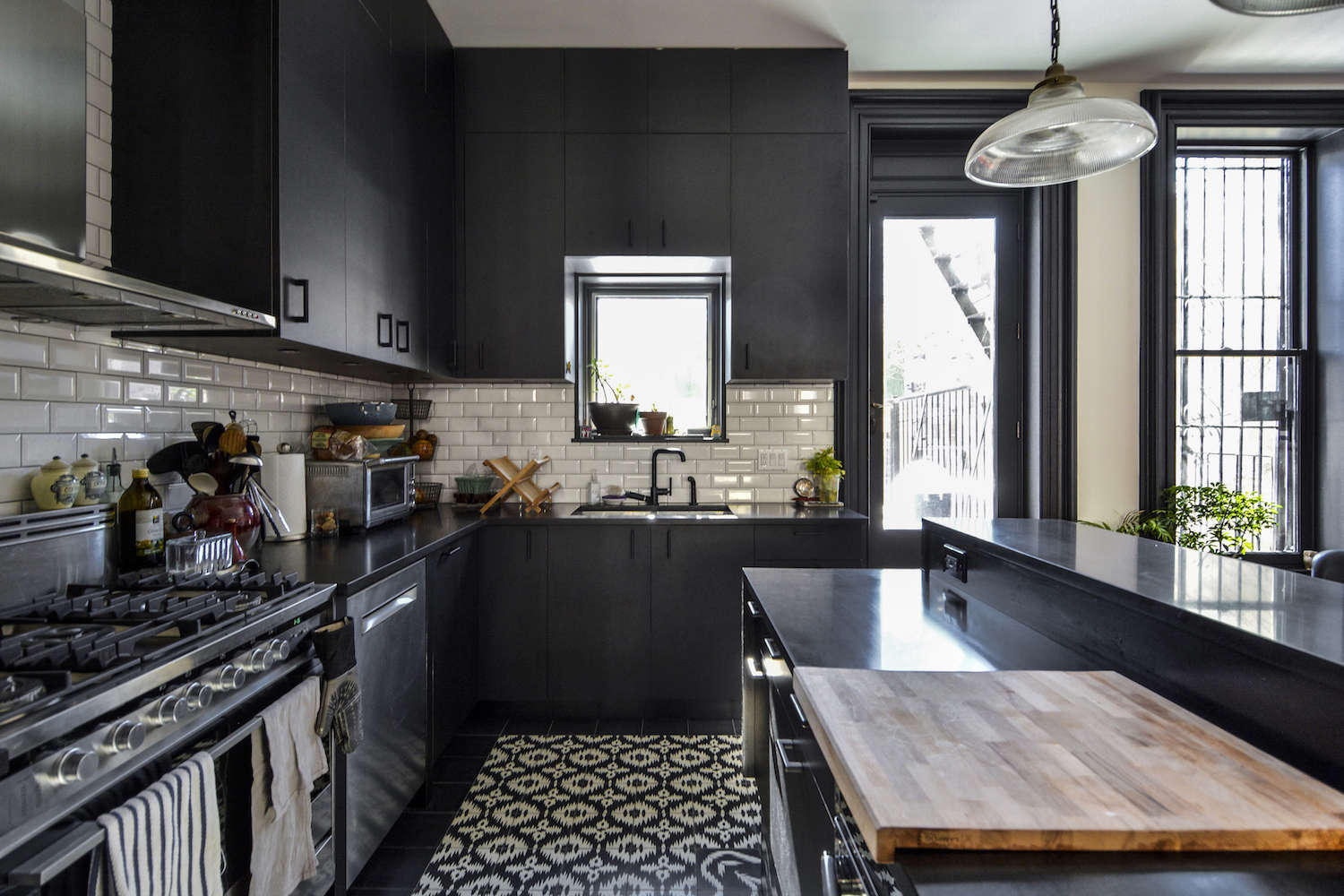 Above: The kitchen, which Merkel describes as “Classic New York with a Bolivian twist,” has cement tiles—the Ikat pattern from Villa Lagoon Tile—which the couple laid themselves to look like an area rug. The island is detailed with a butcher block section and under-the-counter necessities, such as garbage bins. The door that leads to the deck was shifted to the right (and replaced with a single-panel glass door) to allow room for the sink wall. The range is a Fisher & Paykel. 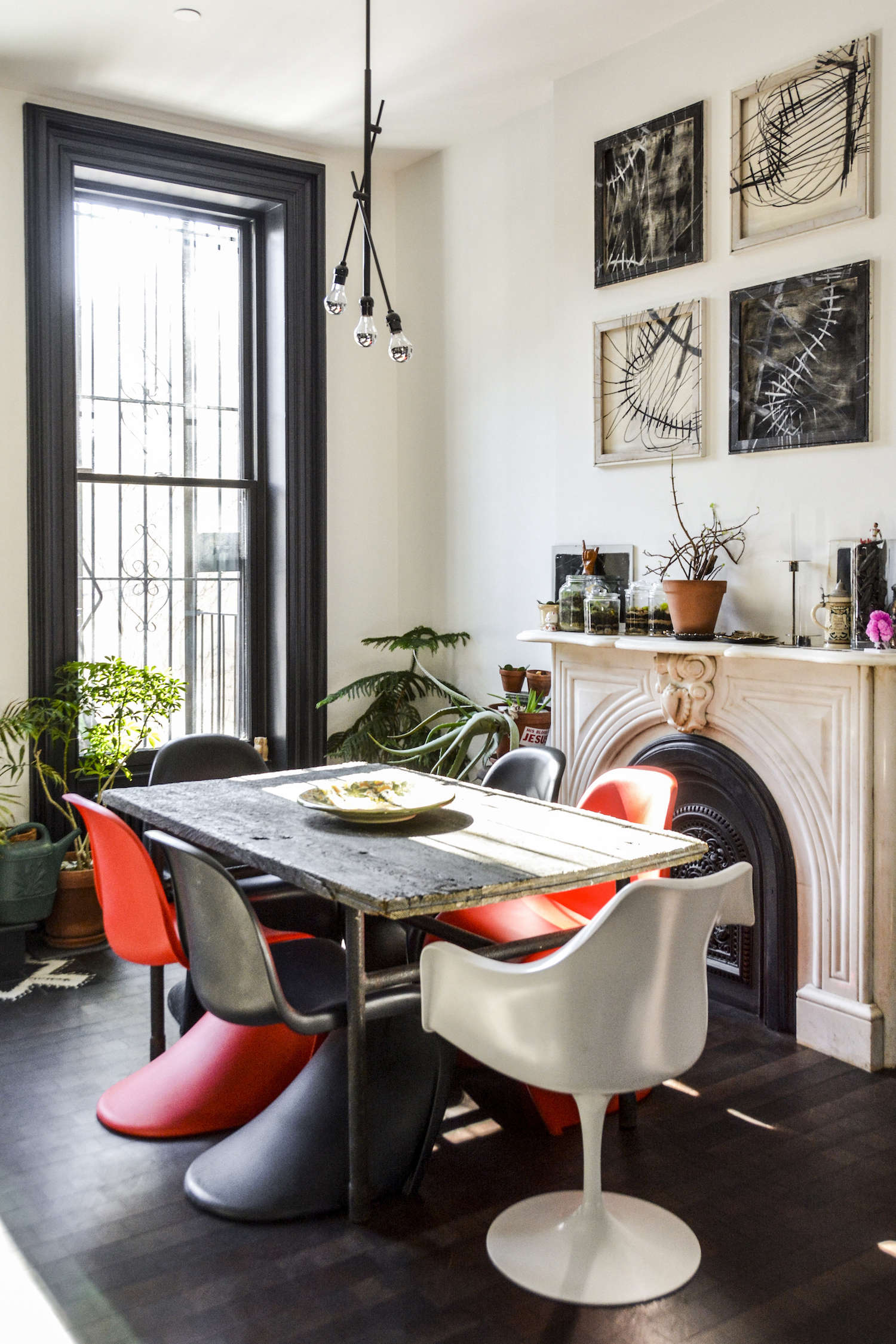 Above: The kitchen overlooks a dining area with a table made from an old door—a Providence, Rhode Island, purchase from the couple’s RISD days. The grid of black-and-white prints are by Rojas, who moonlights as an artist; see Ana Catalina Rojas. 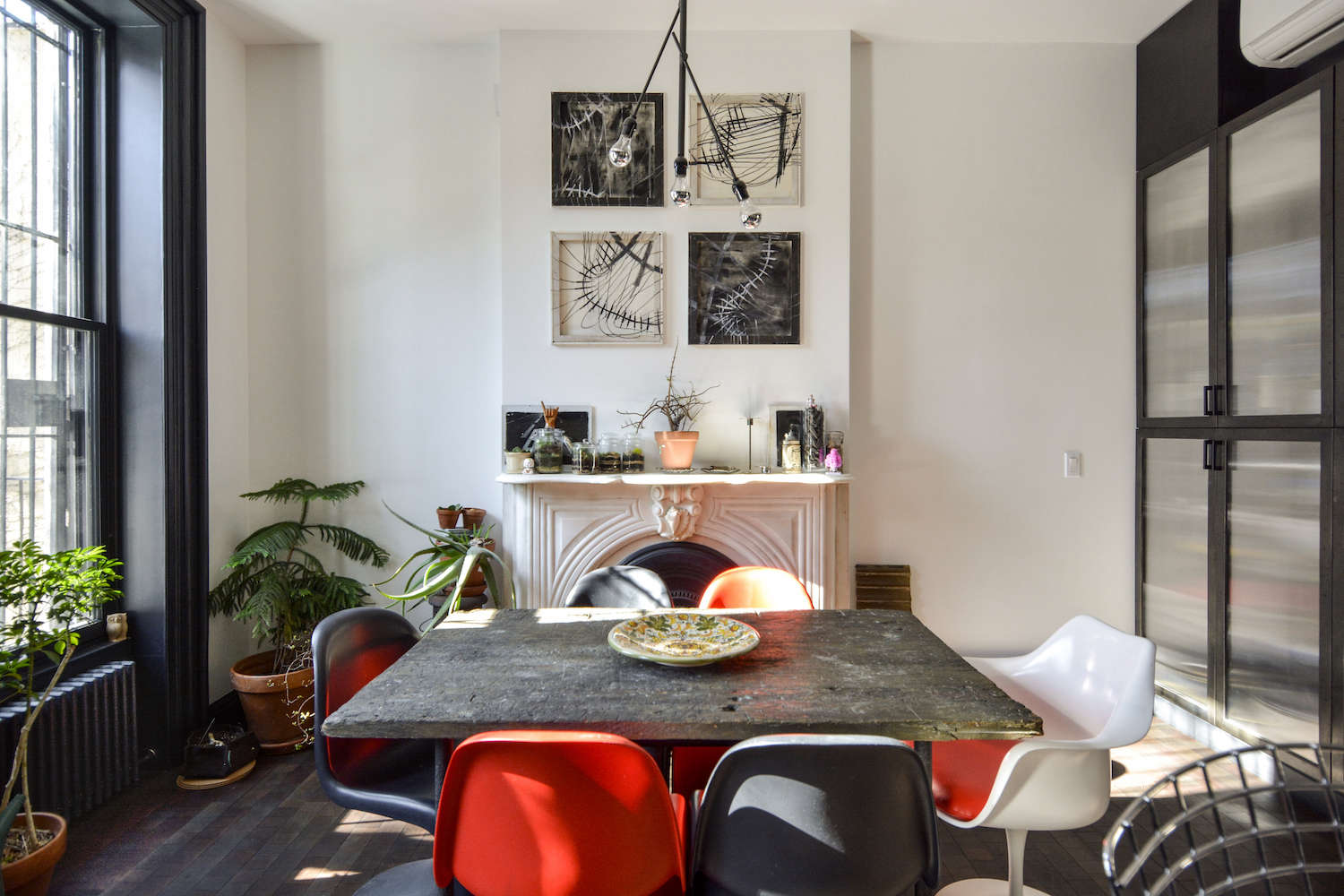 Above: The table stands alongside a wall of built-in pantry storage with interior lighting and Houdini Glass doors. The low-profile, cast-iron radiator here (and throughout the house) is the Gov-Free from Governale. 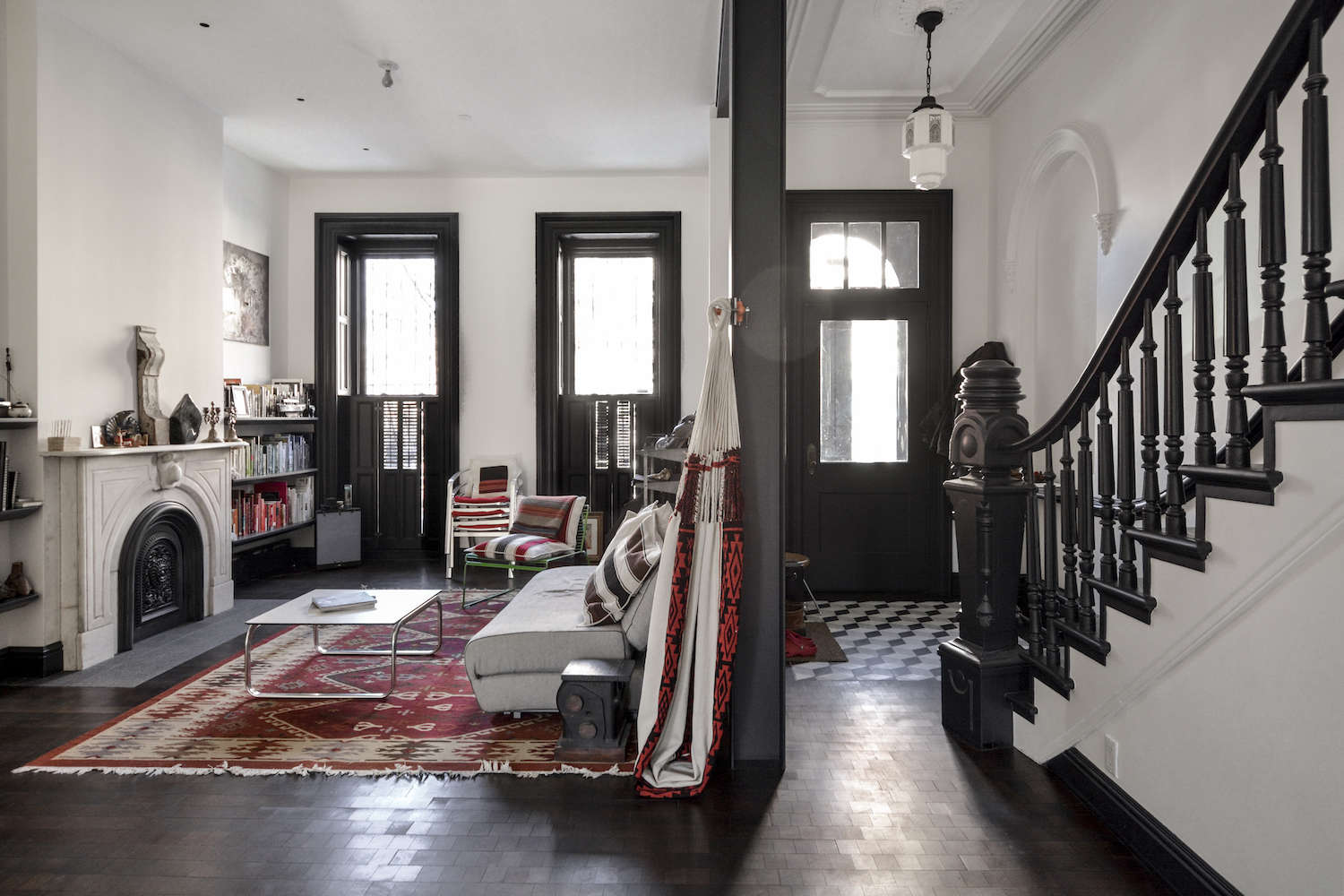 Above: A view of the opened up entry space (the exposed beams work well as hammock supports). The end-grain wood floor is Kaswell’s Douglas Fir Strip Block with an ebony stain finished with matte Woca Oil. After a recent party, Merkel applied patches of tung oil to the floor—”not knowing it would turn into a candy hard-shell”—and then had to sand it down and get back out the Woca Oil.

The tubular steel coffee table is Marcel Breuer’s Laccio design (and was another DWR sale find). The windows are all by Pella with lower shutters closed here for privacy. (Curious about interior shutters? See Remodeling 101 for details and sourcing.) 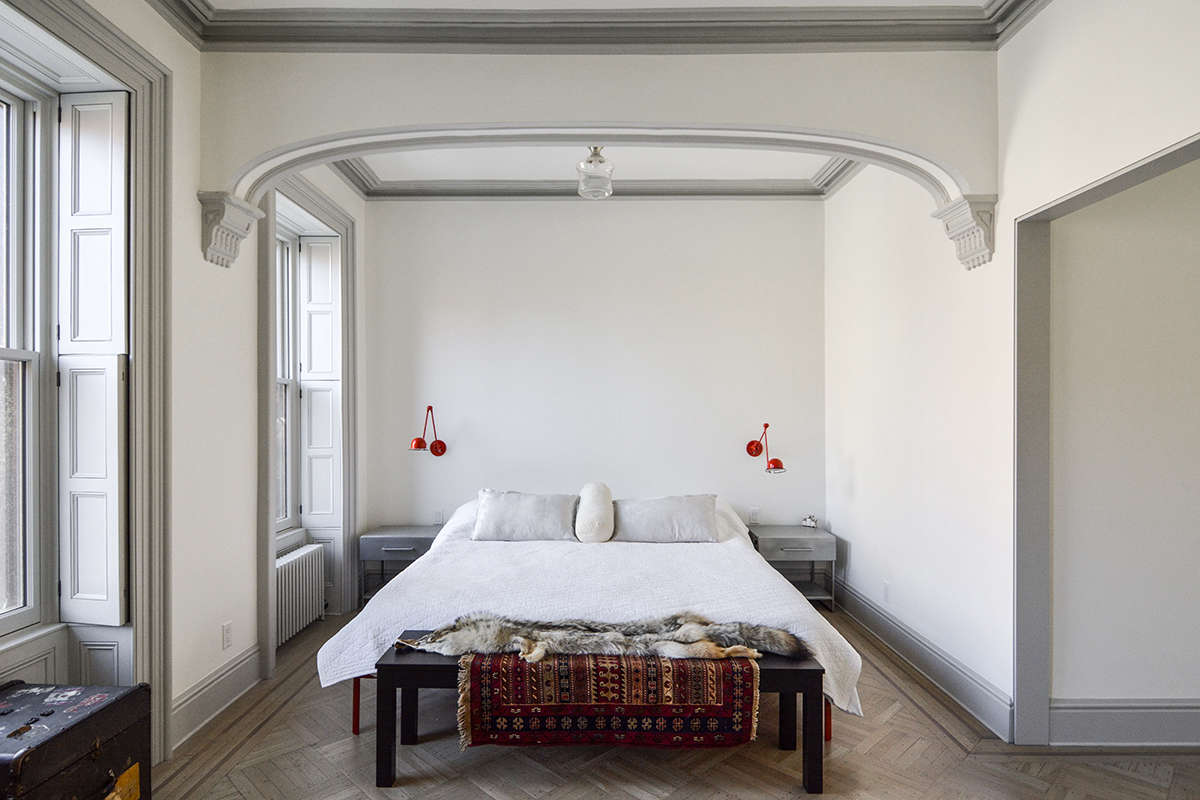 Above: The couple chose a palette that goes from dark to light punctuated with red. “We wanted to keep to a somewhat monochromatic theme, but play with having the house be a gradient from black on the ground floor to white the higher up you go,” says Merkel.

Located on the second floor, the master bedroom has original moldings painted in Benjamin Moore’s Stonington Gray and bedside wall lights by Jielde (read about the design in 10 Easy Pieces: Best Architect’s Lamps). The black bench is the Bjursta from Ikea. The white walls throughout are in Benjamin Moore’s Simply White. 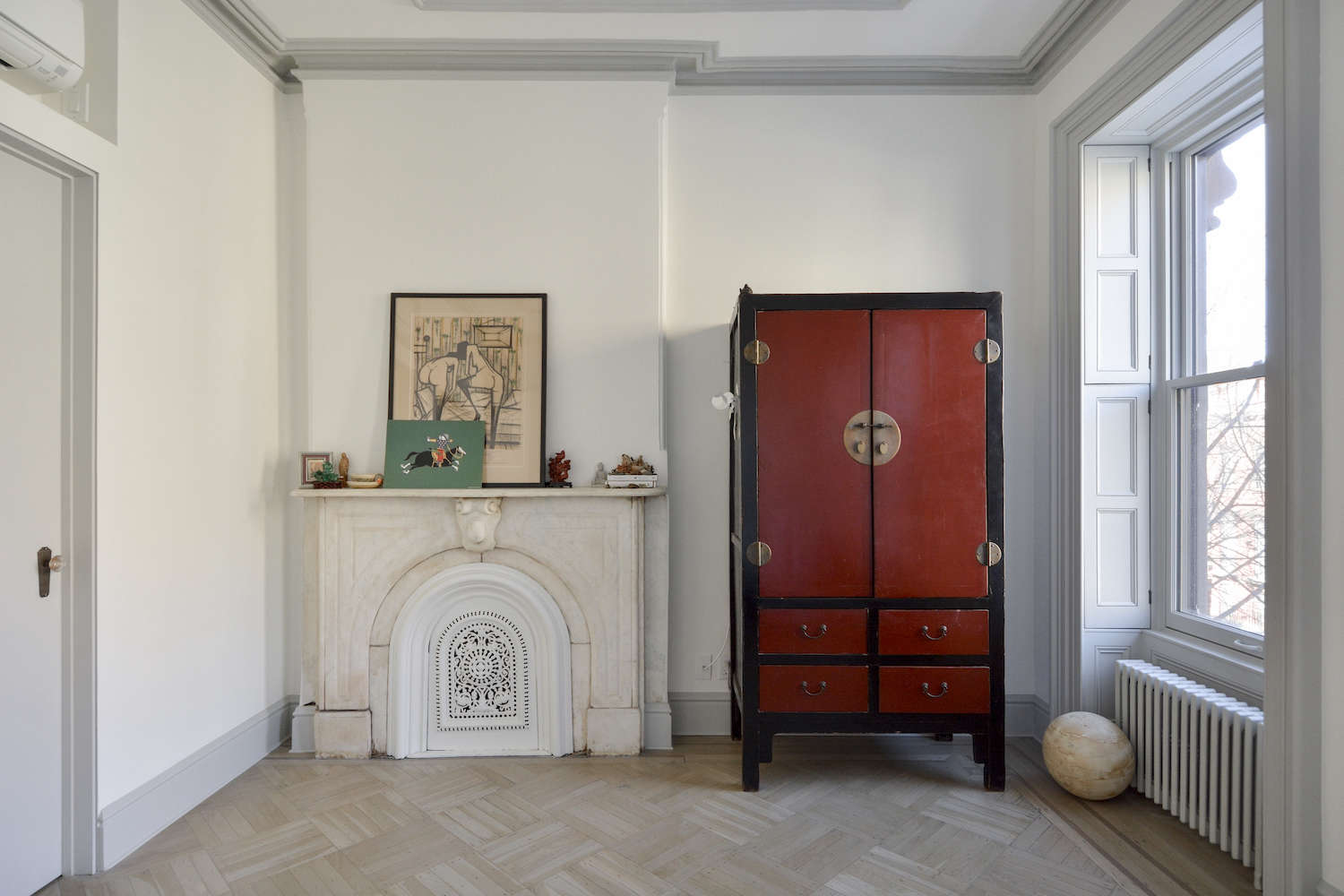 Above: A Chinese lacquered cabinet serves as the room’s wardrobe. The parquet floor is original newly stained a subtle gray and finished with Minwax satin sealer. And lest you think the couple are in sync on all the elements in the house, here’s what Merkel has to say about the plaster ball by the window: “We’ve moved five times in the past ten years, so I have had to carry that useless thing up and down stairs way too many times. It’s the bane of my existence.” 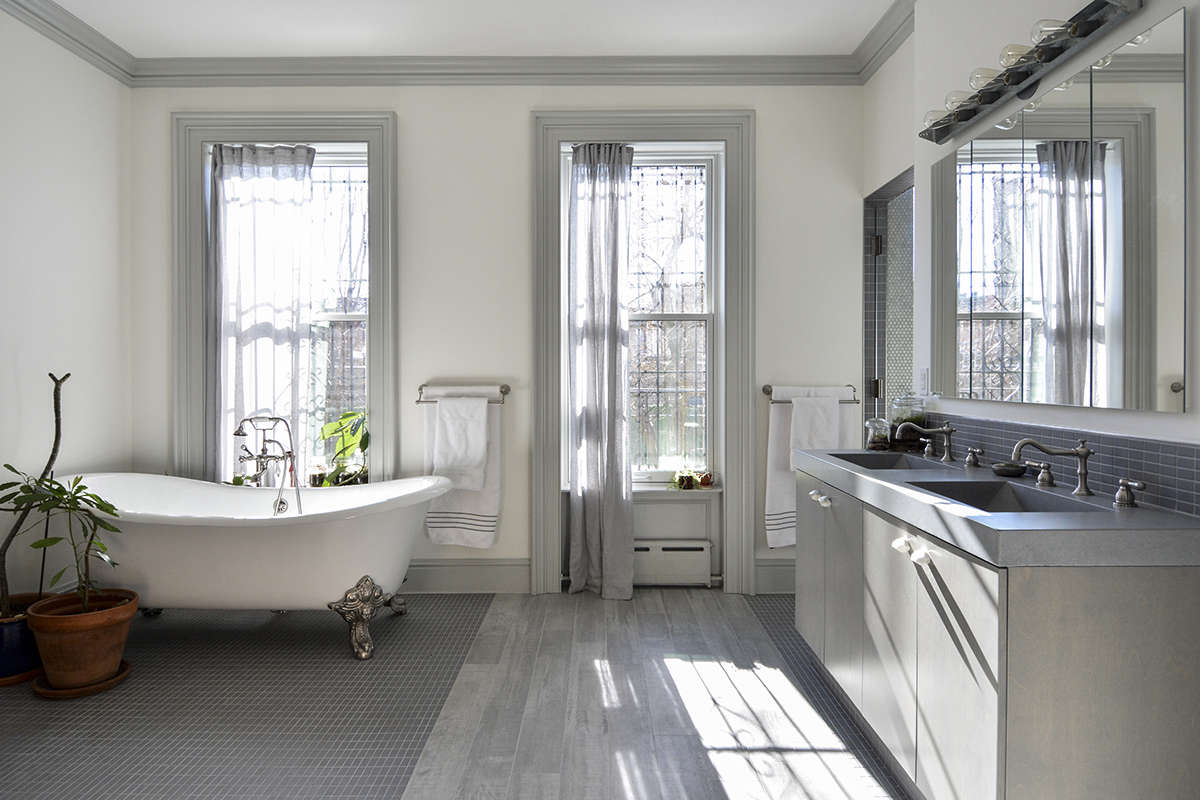 Above: The master bath is finished with a patchwork of gray tiles, including Daltile’s Keystones mosaic tiles in suede gray around the tub and behind the sink. “We weren’t quite doing a full gut renovation, so we had to keep the plumbing locations in roughly the same place, limiting what we could do with the overall layout,” says Merkel. 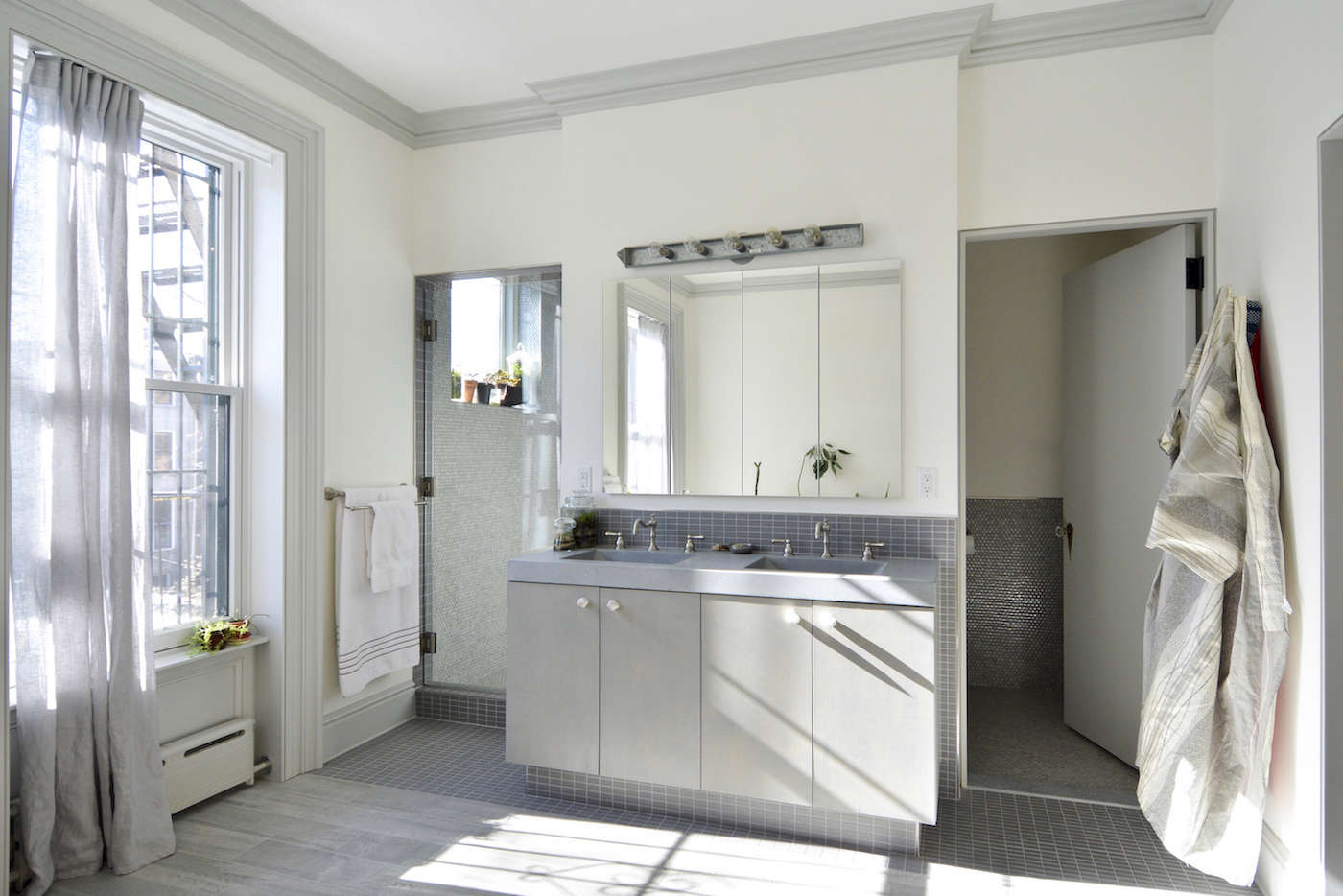 Above: The counter is cast concrete with faceted sinks custom made to the couple’s design by Dex of Atlanta (it’s now in the company’s lineup: ask for the Merkel Sink). As for the continuous medicine cabinet, Merkel explains: “We couldn’t find a really large four-paneled mirrored cabinet—nobody seems to make them—so we bought four inexpensive, single-pane Recessed Medicine Cabinets and installed them to look like one. All doors in the house are either original or salvage pieces that Rojas bought at Brooklyn nonprofit Built It Green and refinished. 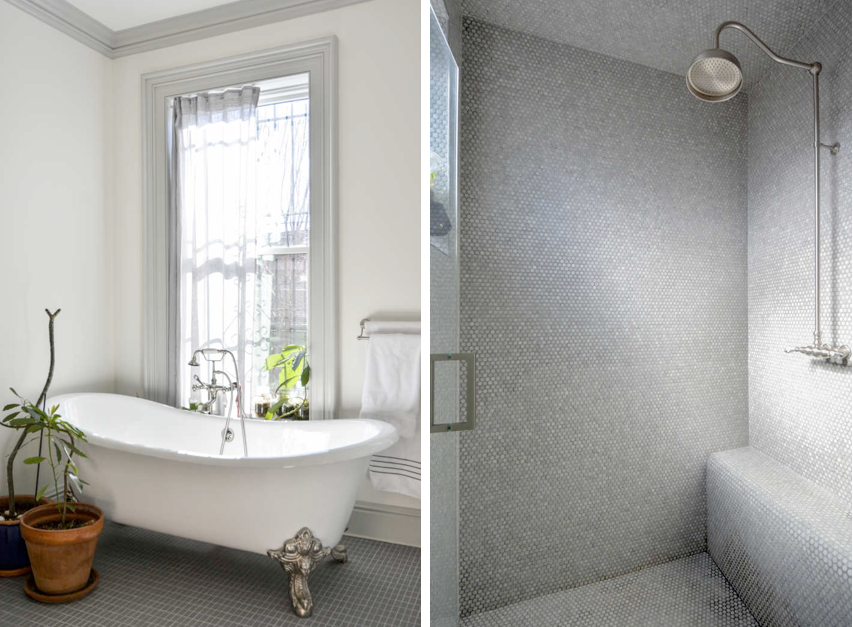 Above L: The 72-inch-long Lena Cast Iron Clawfoot Tub with “monarch imperial feet” came from Signature Hardware: “We found that Signature Hardware was a great source for pretty high-quality plumbing fixtures without the cost of a big name brand,” Rojas told us. Above R: Nemo Glazed Pennyround Tiles and an Elizabethan Classics Wall-Mount Shower. 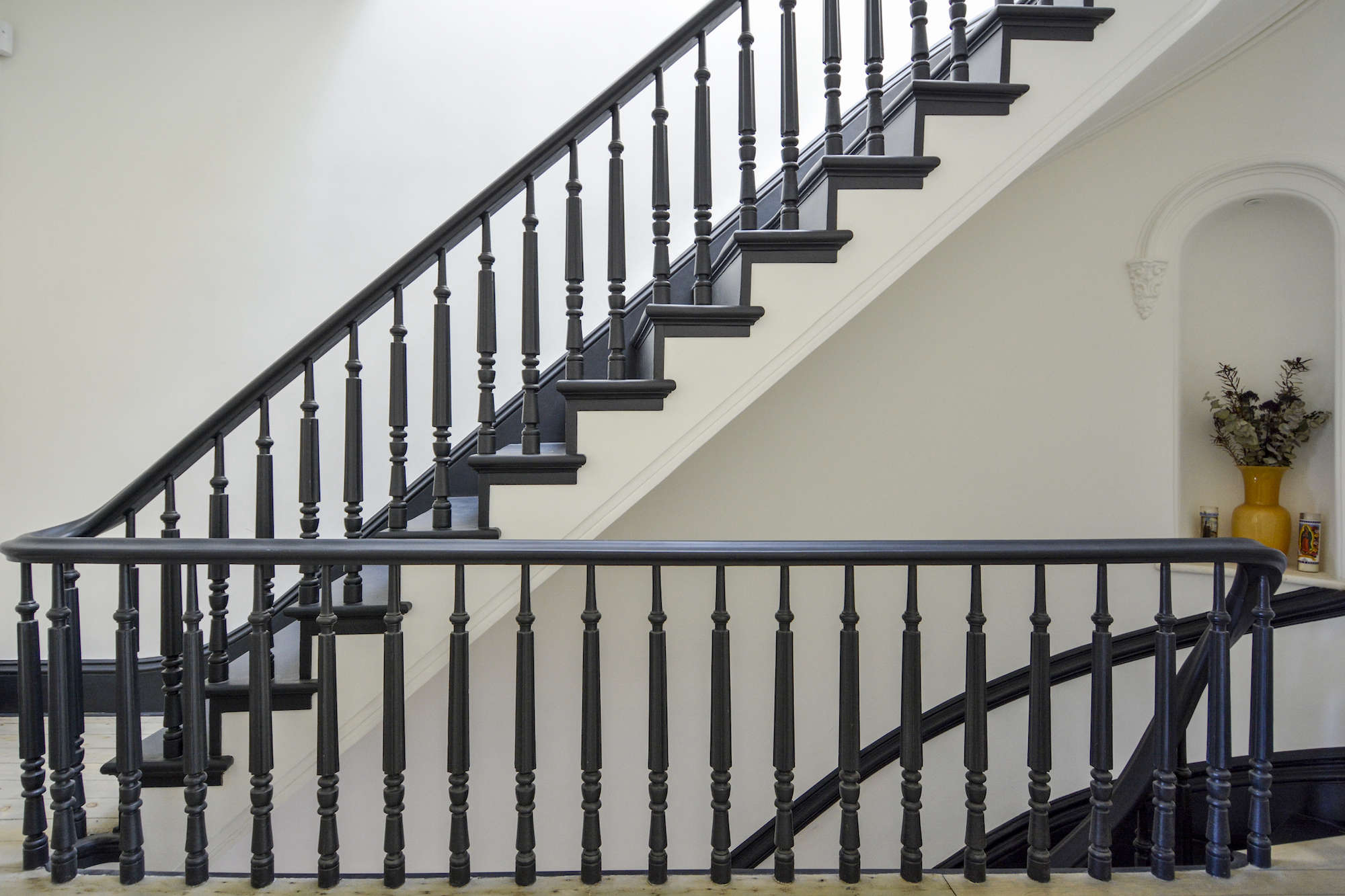 Above: The stair is original and, like all the house’s dark detailing, painted in Black Iron from Benjamin Moore. 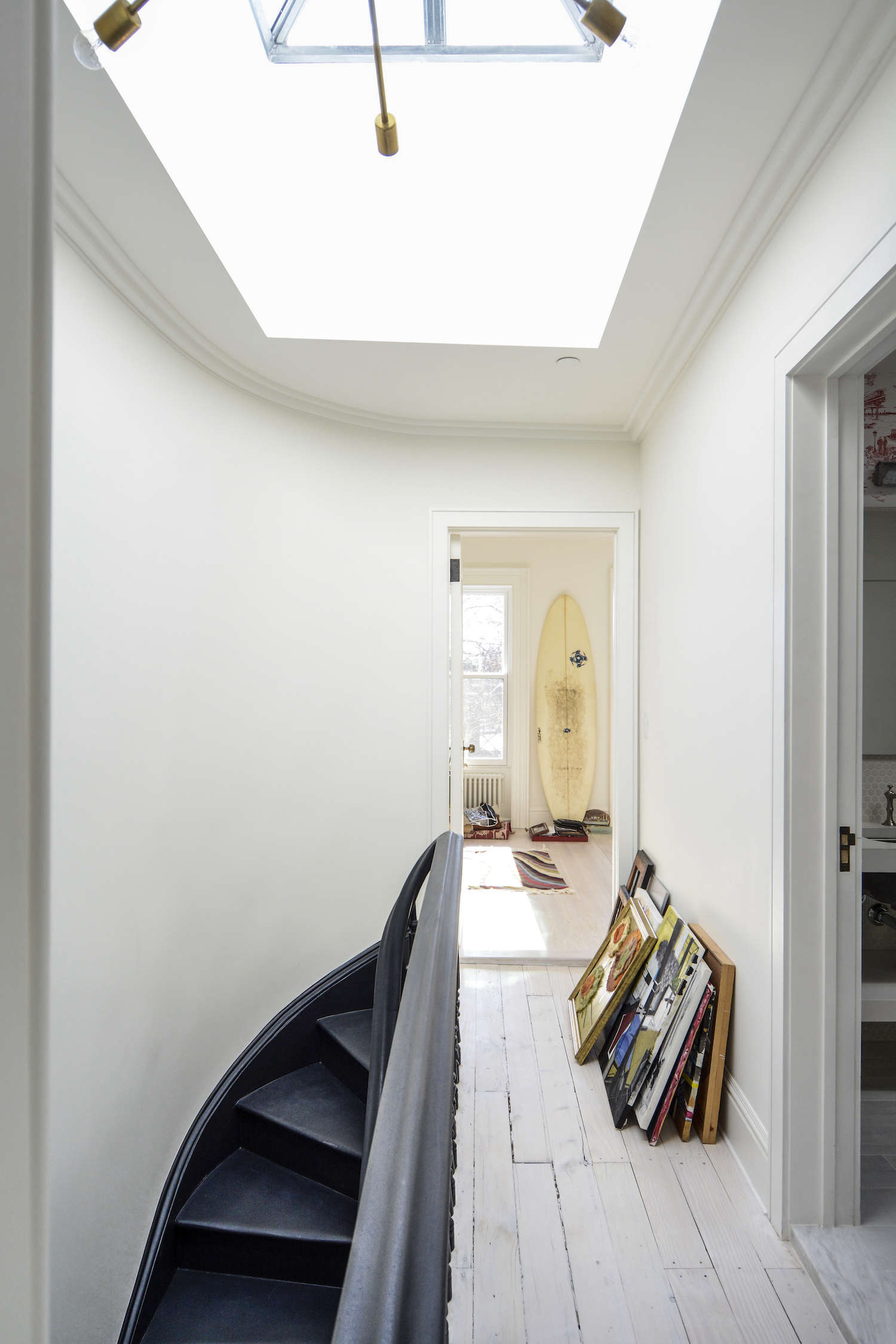 Above: The top floor has a skylit hall with a brass Ceiling Light by One Forty Three. 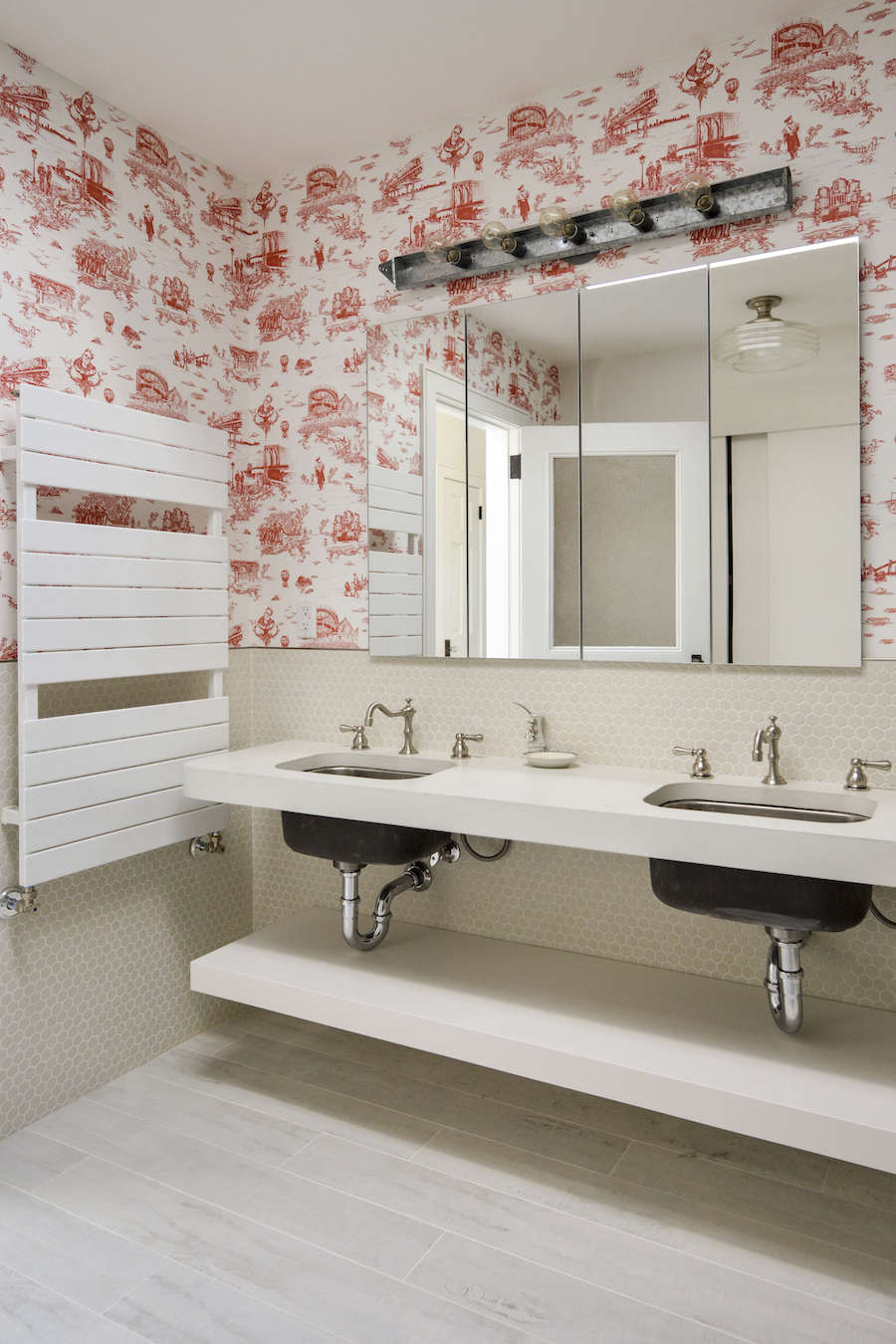 Above: The top-floor bath is papered with Flavor Paper’s Brooklyn Toile (a design commissioned by Mike Diamond of the Beastie Boys). “We know the guys at Flavor Paper, and even though we prefer not to cop someone else’s style, we thought the content was so perfectly Brooklyn that we couldn’t pass it up,” says Merkel.

Like the master bath, the counter is cast concrete fabricated by Dex—here, as a money-saver, it’s inset with $100 stainless steel bar sinks (“to do cast concrete sinks would have added another $500 to $1,000 to the scope,” says Merkel). And four recessed medicine cabinets are clustered to appear as one. The Towel Warmer Radiator is by Runtal. Intrigued? Read our Remodeling 101 posts on Towel Warmers (they’re less expensive than you might think) and Wall-Panel Radiators. 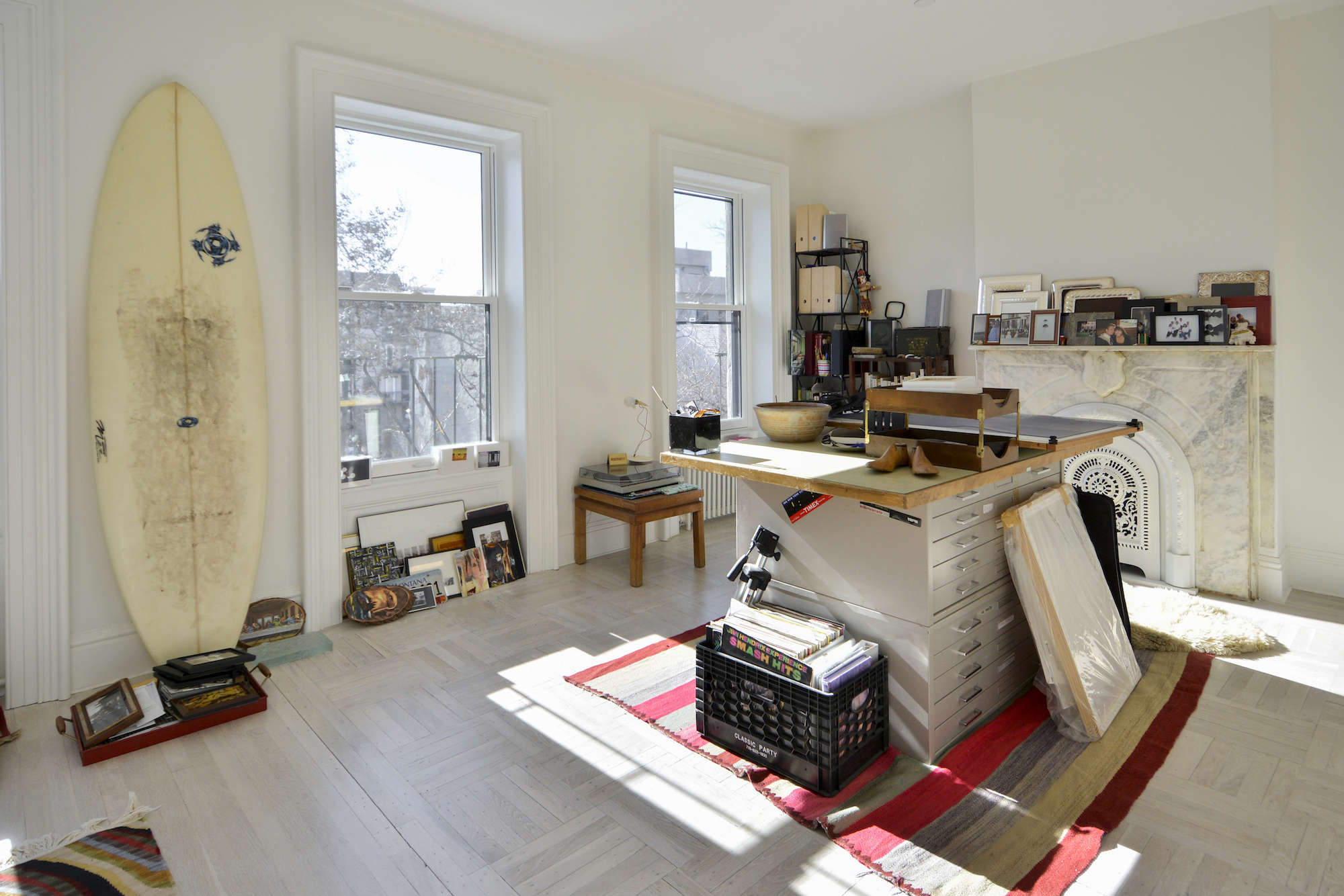 Above: A top-floor bedroom is now the couple’s workroom. (They both surf, but Merkel, who grew up in Grand Junction, Colorado, is most at home on skis.) 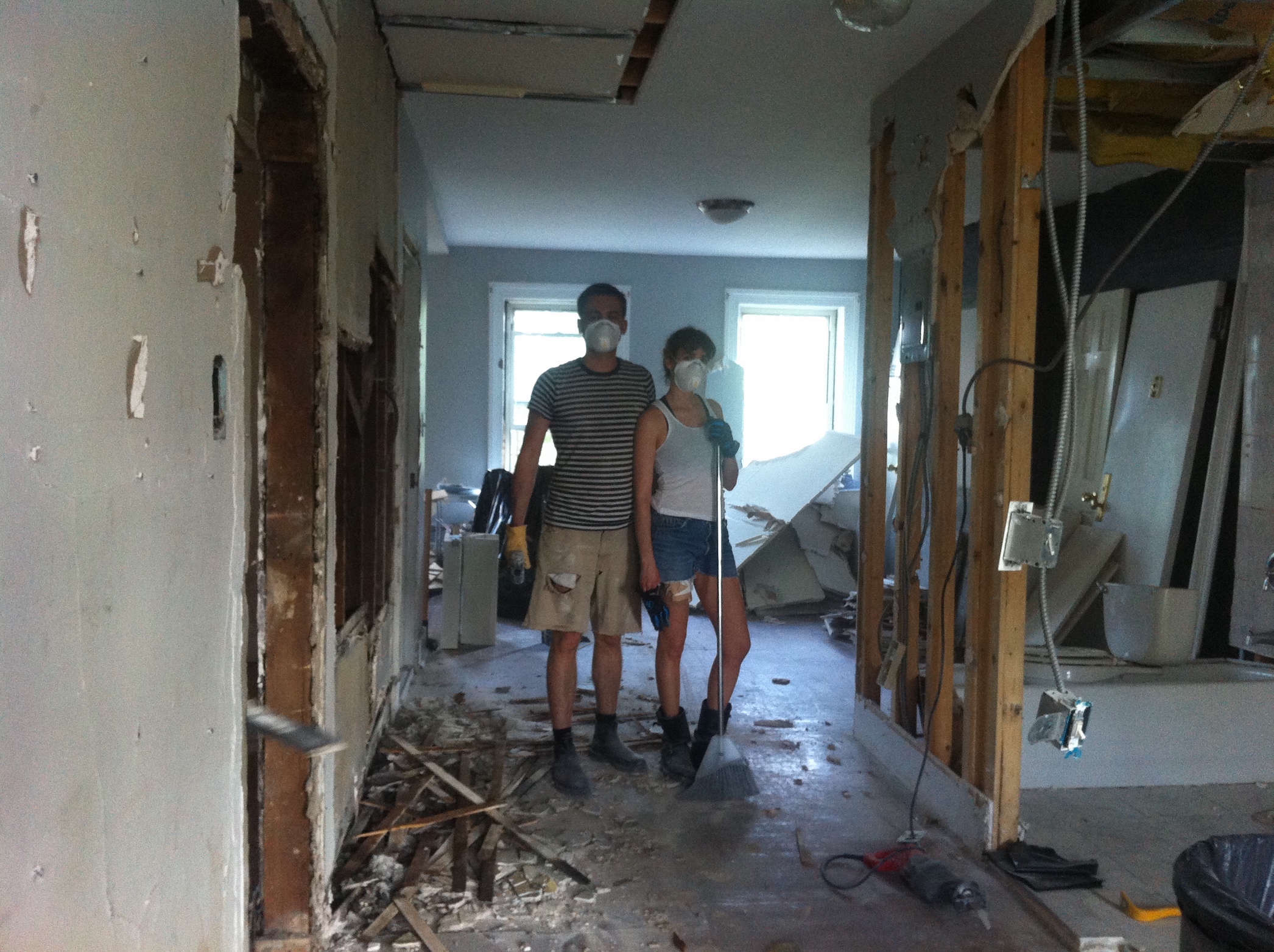 Above: Construction in progress. To get started, the couple held a demolition party. Like all remodelers, they say, “Nearly everything was harder than we originally thought or at least took longer.” Lows and highs? “Replacing the sprinkler system, abating the asbestos on roof, and jumping through all the bureaucratic hoops were by far the hardest parts,” says Merkel. “But then there were days we’d come home and be amazed by how much our team had accomplished. An experienced framer can frame the whole inside of a house in a day or two. It’s really impressive.”