When Lena Corwin and Josh Dreier were leaving Manhattan for Brooklyn, they were drawn to Fort Greene for its character and history. “The neighborhood is filled with artists and is flanked by The Brooklyn Academy of Music to the south and Pratt Art Institute to the east,” says Lena. “For years it was a predominately African-American neighborhood and it’s very mixed culturally.” Lena’s name may sound familiar: she’s a well-known textile designer, craft teacher, and author of the DIY books Printing by Hand and Made by Hand. Josh is a web developer and drummer, and they have a young son, Eli. The couple fell for their Italianate brownstone thanks to, says Lena, “its obvious beauty, and the fact that it was, amazingly, in our price range.”

Built some time between 1860 and 1890 likely as a second home for Manhattan families, the house was converted into three apartment units in the 1980s. After purchasing the building in 2005, Lena and Josh lived in the bottom duplex and rented out two apartments, but kept the top floor to use as a studio–it became the setting for classes taught by Lena and other expert crafters, which is what led to her books.

Recently, the family sold their house and relocated to the San Francisco Bay Area (where Lena grew up). Their departure inspired us to ask Lena to guide us through her beloved old brownstone. 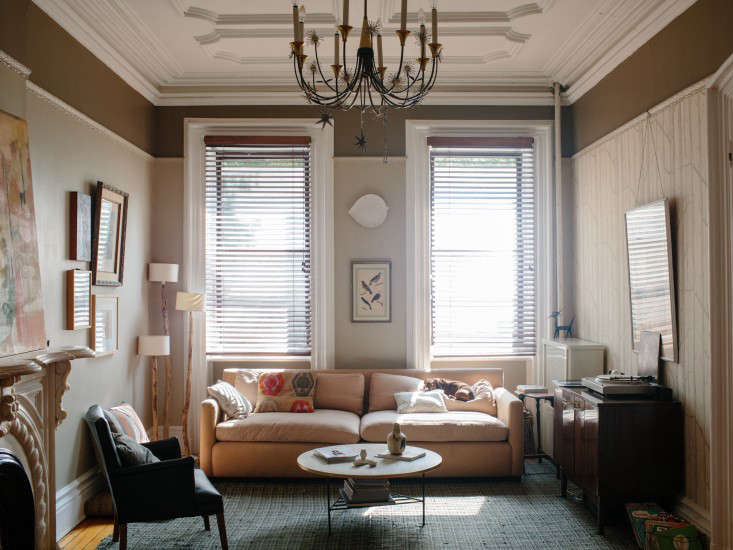 Above: “We wanted to use wallpaper in the living room, but worried it would make the room feel too closed in,” Lena remembers. As a solution, they painted three walls with Farrow & Ball colors (Dove Tale is the lighter shade; Mouse’s Back is the dark) and wallpapered a single wall. “I usually don’t like accent walls, but because this one is so subtle, I’ve never tired of it over the years.” The sofa is from Montauk Sofa, the trio of driftwood lamps are from French company, and the chandelier is vintage. 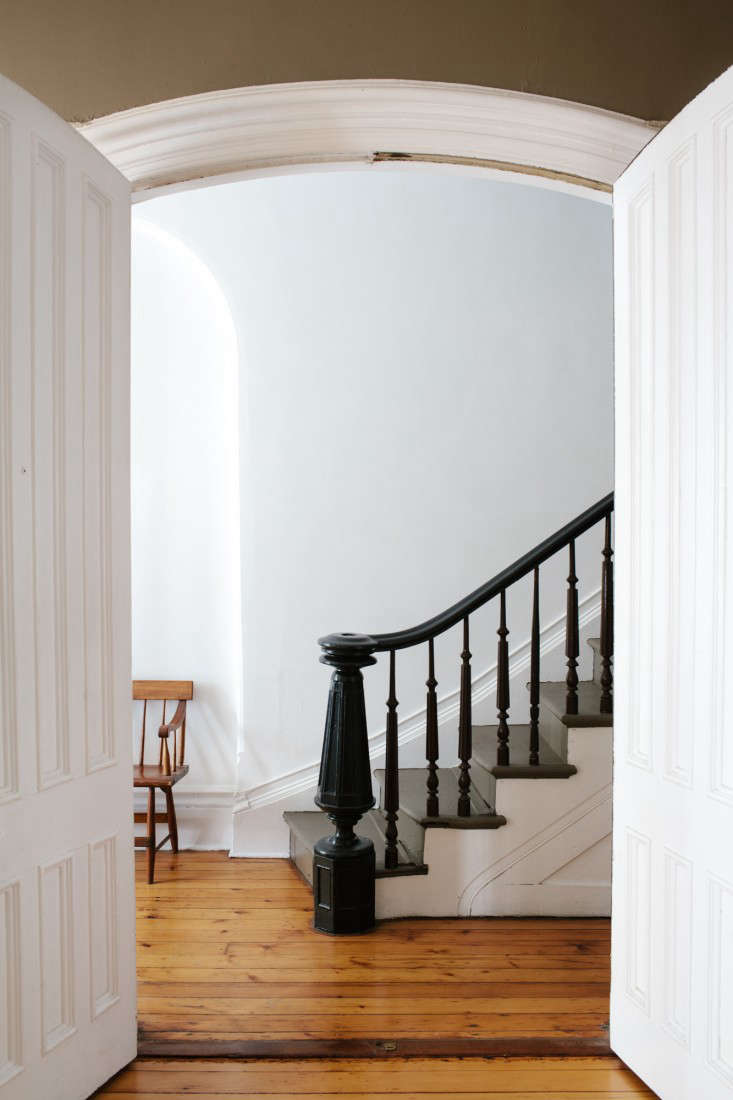 Above: “We painted our banister in Benjamin Moore’s Black Beauty, a black I love because of its softness (it’s mixed with white so it’s not a pure black) and it feels appropriate for an old house.” 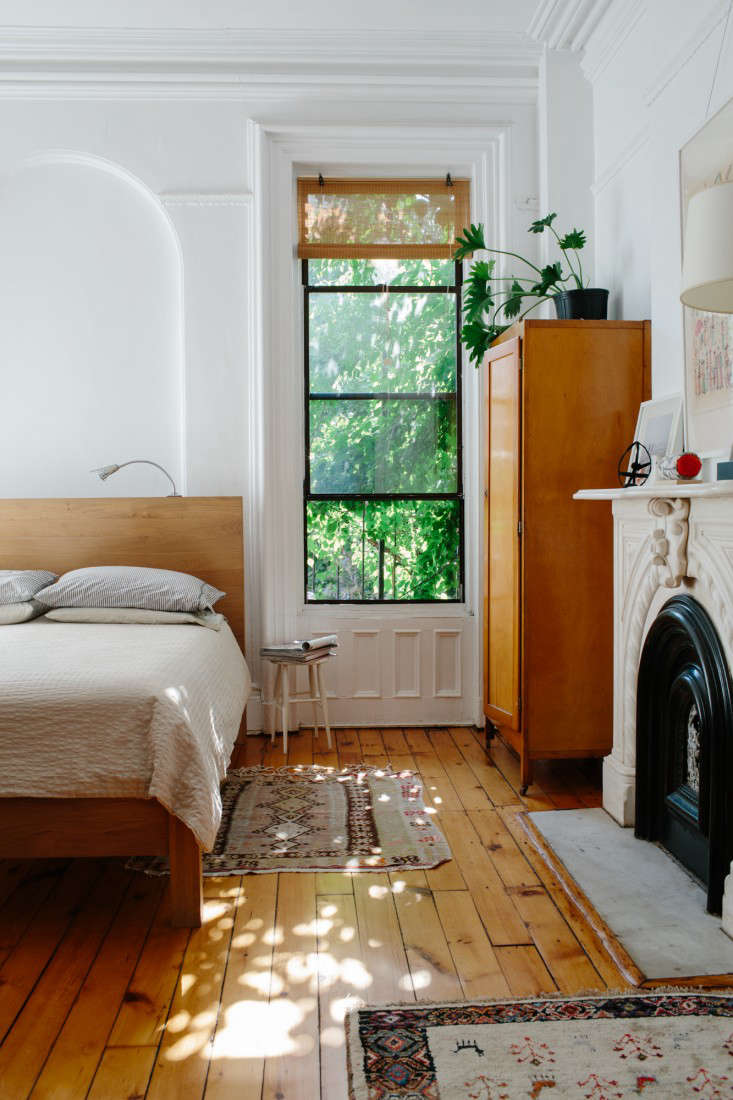 Above: Lena kept the bedroom pared back: a simple wood-framed bed, a bedside stool, a midcentury armoire, and a single houseplant. The room’s original marble mantel adds a lot to its charm. 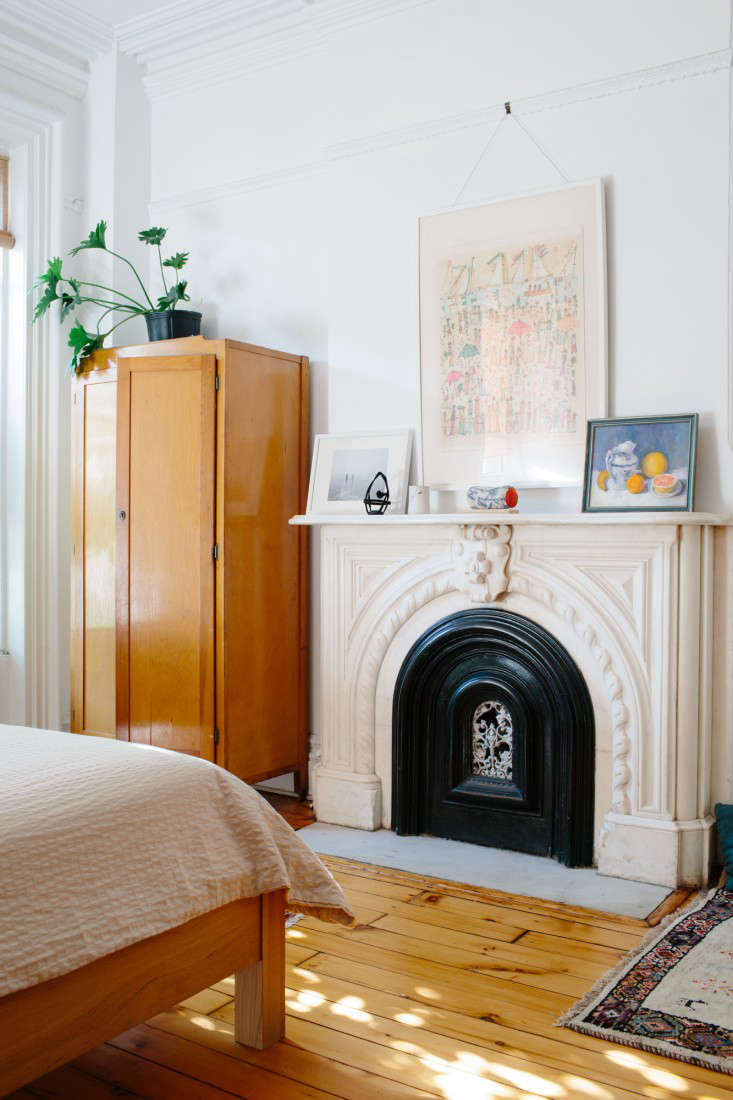 Above: The mantel displays a collection of artwork, including an antique still life of fruit and a framed photograph taken by Lena. 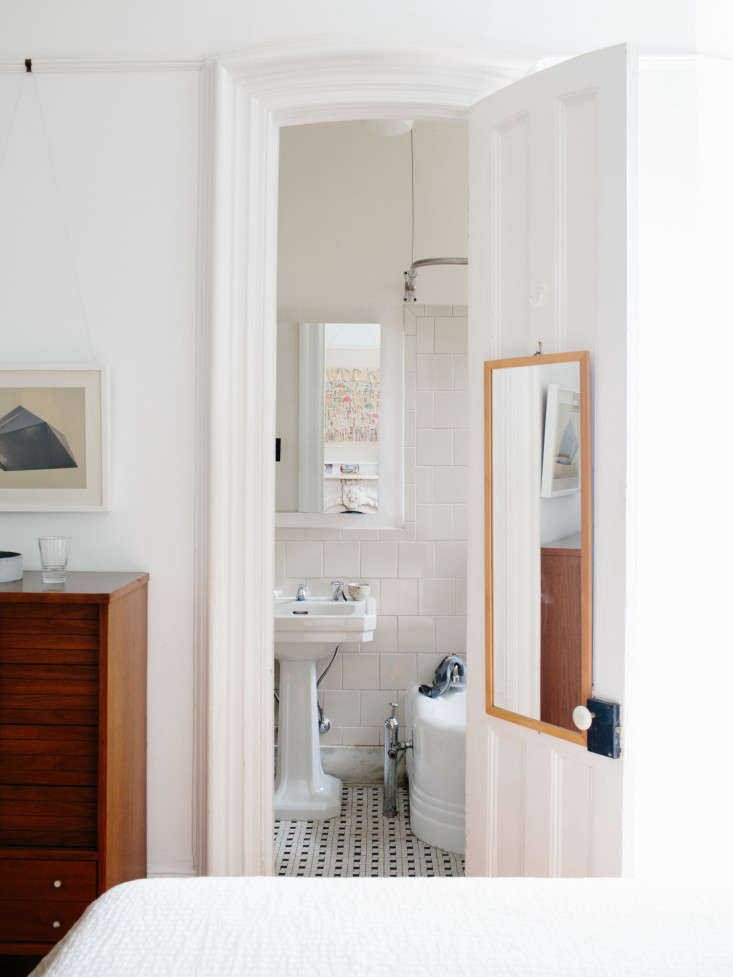 Above: Lena and Josh restored the old basket-weave patterned tiles common in Brooklyn brownstones and likely installed in the early 1900s–the house was built without bathrooms or electricity. Lena and Josh added cream-colored square wall tiles with gray grout and a shower over the bathtub. “I searched high and low for a shower knob plate that wasn’t plastic,” she says, “and finally found one from Pottery Barn.” 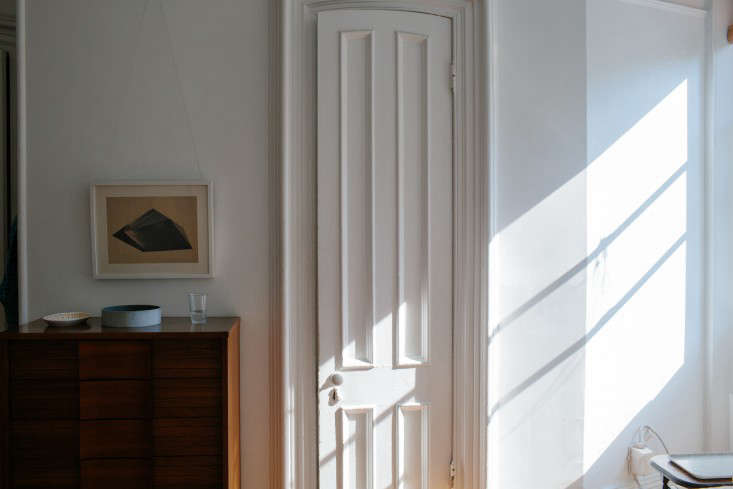 Above: The east/west facing-house receives plenty of sunlight. The black and white print on the wall was purchased at the New York Art Book Fair, artist unknown. 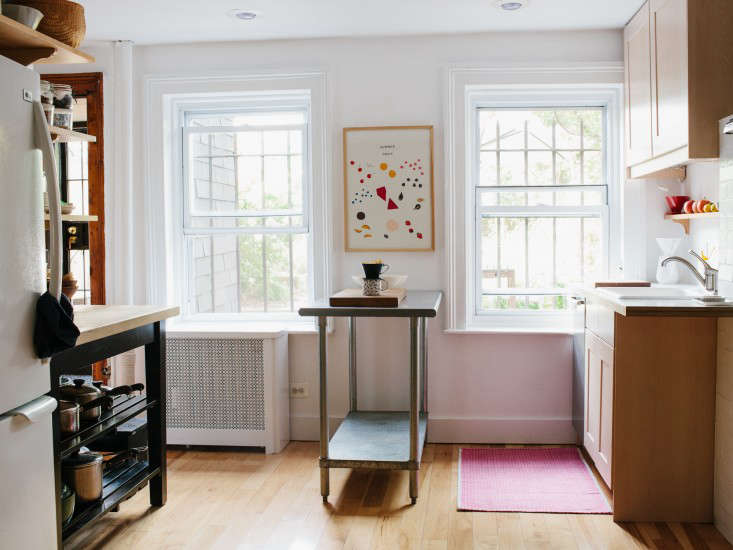 Above: The 250-square-foot kitchen required a few inexpensive renovations to make it functional for a family. The stainless steel island came from Bowery Restaurant Supply. The couple added the Two Shelf Le Classique Kitchen Table from John Boos, shown at left, and Ikea cabinets above and below the sink. A carpenter friend built out the sink countertop in Baltic birch ply and Italian white laminate. “I would happily use the materials again in a renovation,” says Lena. A framed print by Clare Nereim and pale pink Ikea rug accent the otherwise minimal room. 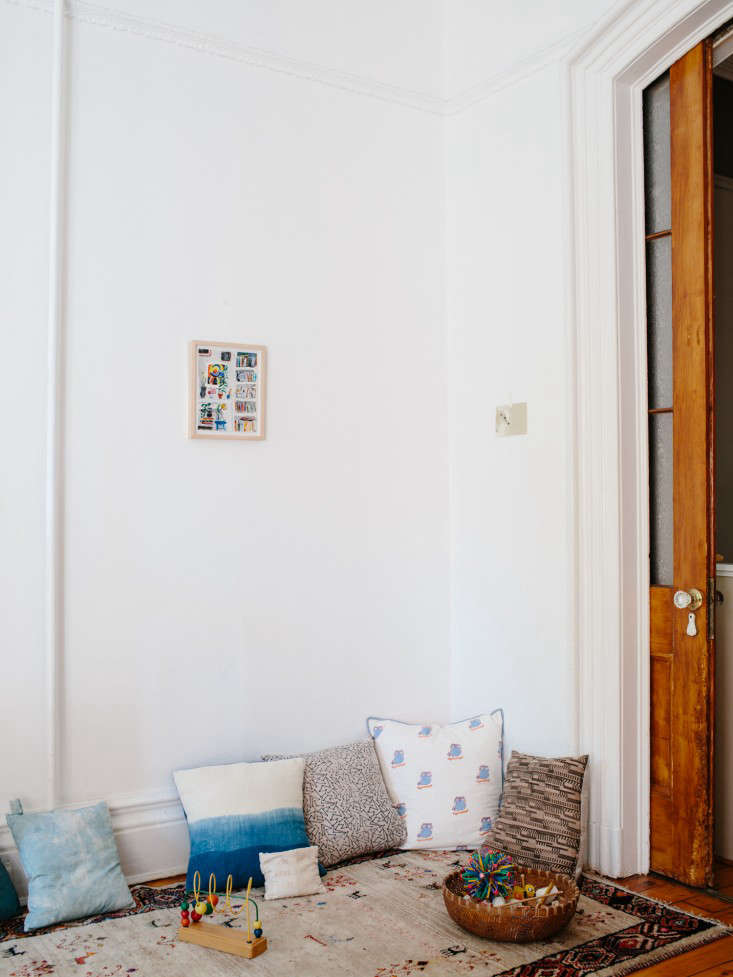 Above: “The rug and pillow corner in our bedroom was a comfortable spot for playing with Eli. The pillows are by designer friends of mine–Muny, Enhabiten, and Mociun–and the rug is from a great dealer in Bethlehem, New Hampshire, called Flying Carpet.” 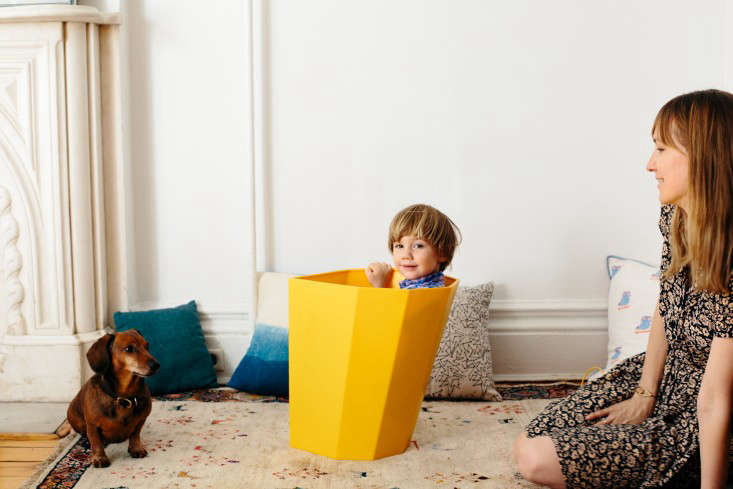 Above: Lena and Eli, who will be three at the end of December, with their dachshund, Gus. 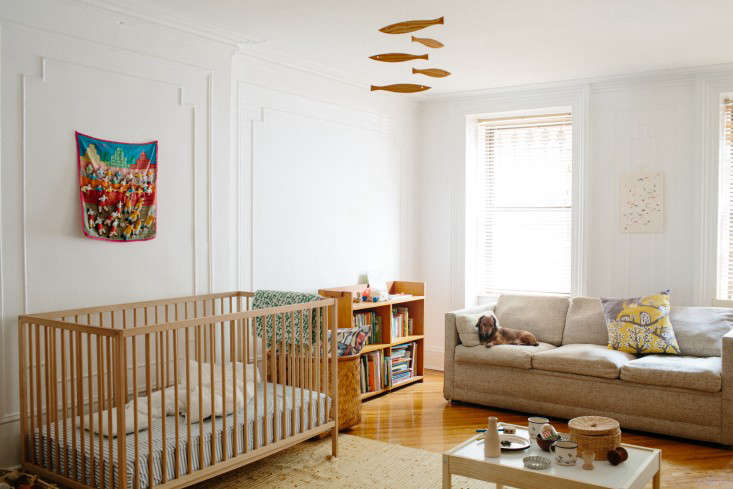 Above: “Our son’s room was unusually large so we had room for a couch, which was wonderful since we often spent time in there with friends and family.” A South American Arpillera, a vintage three-dimensional textile, hangs above the crib; the wooden fish mobile is by Flensted. 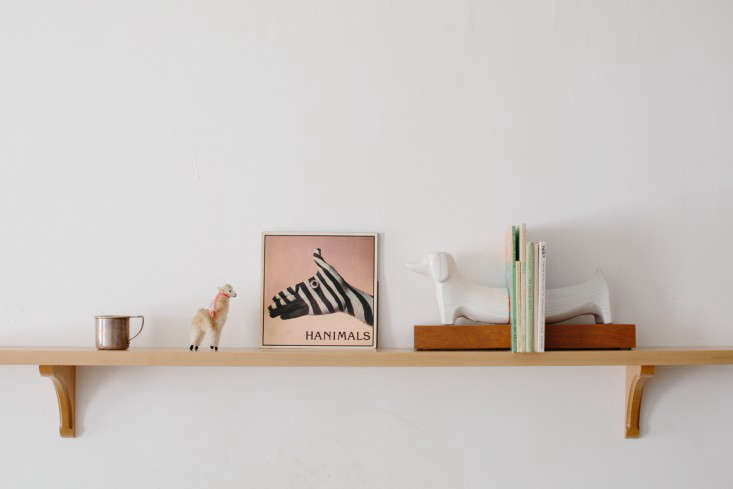 Above: “The thin shelf in Eli’s room was left over from the kitchen renovation. The silver cup was his grandfather’s baby cup and the Dachshund Bookends are Jonathan Adler, a gift from his uncle.” 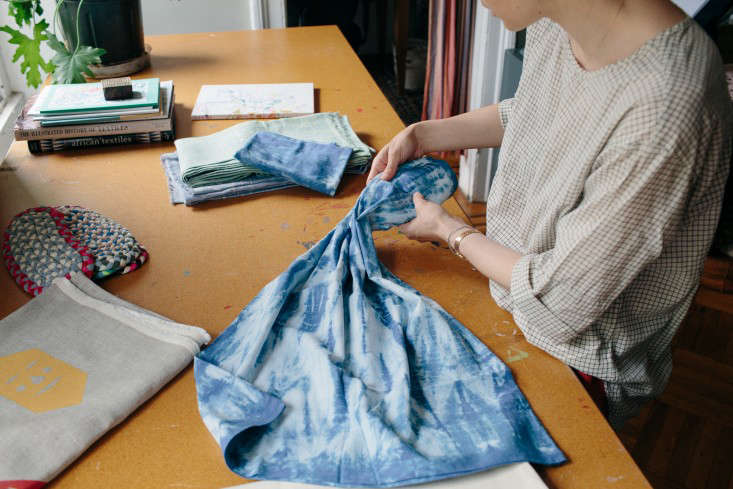 Above: Lena at work on a dyed textile. Her new craft book, Made by Hand, details favorite craft projects taught in her studio over the years; it includes 26 step-by-step lessons involving dyeing, sewing, weaving, crocheting, and jewelry making. 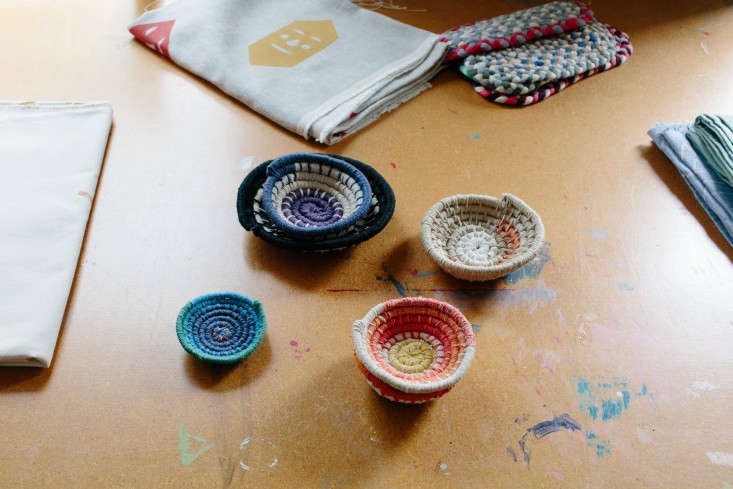 Above: A collection of coiled bowls, a project from Lena’s new book, made from clothes line cord and colored twine. 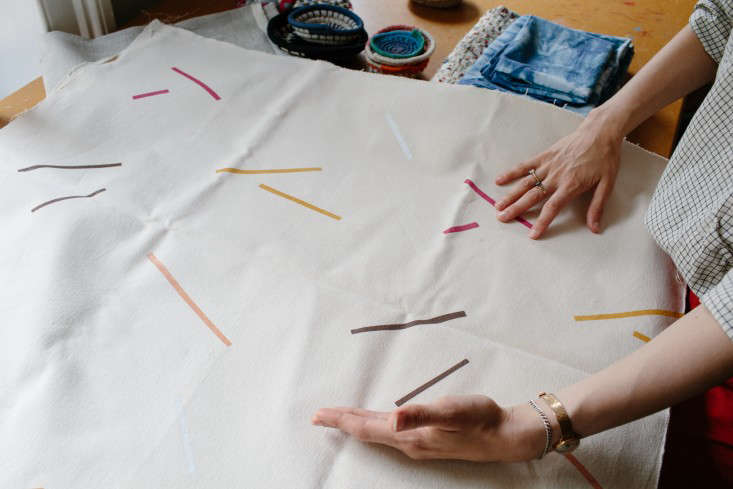 Above: Corwin screen prints geometric patterns onto cotton for sewing and upholstery projects. 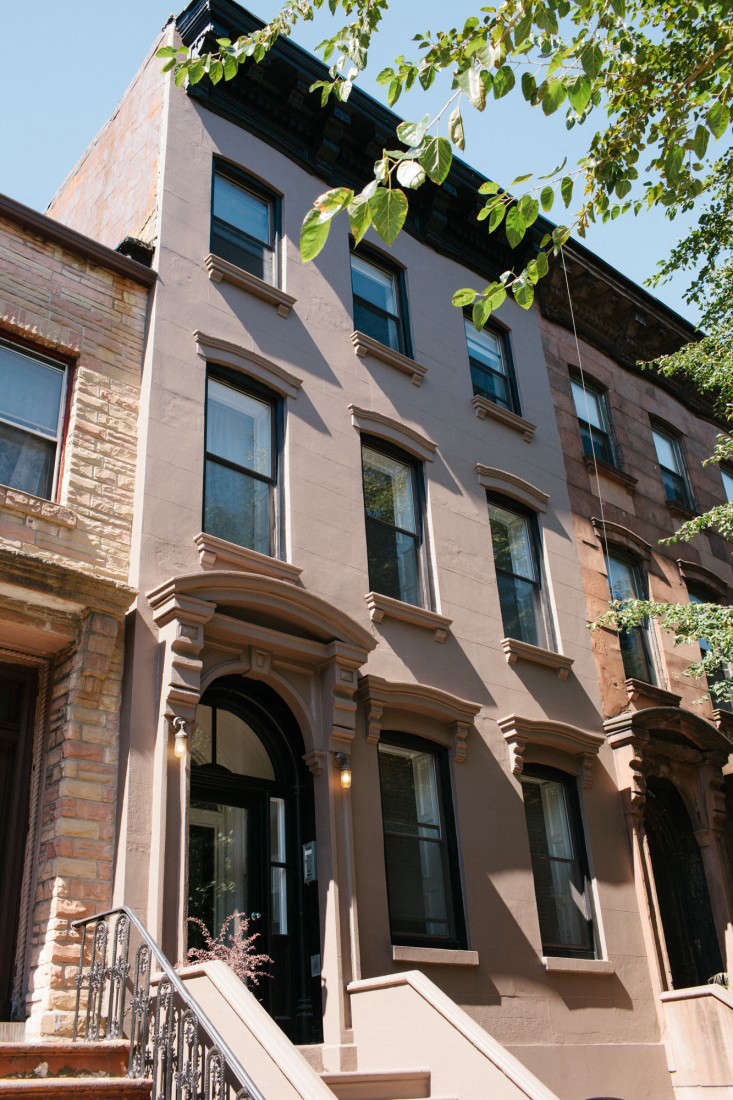 Above: “Over the years, we put a lot of work into the house, including a new roof. There was always something to improve.” For more on Lena Corwin and her books, Printing by Hand and Made by Hand, go to Lena Corwin.com.

See our previous post on Lena’s friend designer Caitilin Mociun: A Design Nomad Sets Up Shop in Williamsburg. And for more house tours, visit the House Call posts in our archive.

Lena Corwin’s Made by Hand