This weekend Hugh Randolph, founding principal of Hugh Jefferson Randolph Architects and a member of the Remodelista Architect/Designer Directory, talks to us about his renovation of a historic house in Austin, Texas. He will be available for the next 48 hours to answer any and all questions about his less-than-straightforward design solutions. Ask away!

The Scenario: Seeking a lifestyle change, a creative Austin couple (he’s an inventor in the high-tech industry, she works in arts education) and their two teenage daughters trade their 4,800-square-foot home far from town for an 1,800-square-foot, one-story Greek Revival cottage in historic West Austin.

The Challenge: The family aspire to what they term “less space, less waste” living, and yet their new place needs to be considerably rethought and enlarged to work for them. Architect Hugh Randolph has to find a way of adding another 1,000 square feet while maintaining the traditional character of the house and keeping its surrounding garden as large as possible.

The Solution: Randolph can’t extend, so he builds up. With some clever roof manipulation, he fits an entire teen suite (two bedrooms and a shared loft) into the eaves of what had been attic space. Meanwhile, he reworks the main floor so extensively that only one living room wall and the chimney and fireplace are in their original locations.

The Result: A light-filled modern house set in a traditional-looking cottage.

Any questions? Ask away! 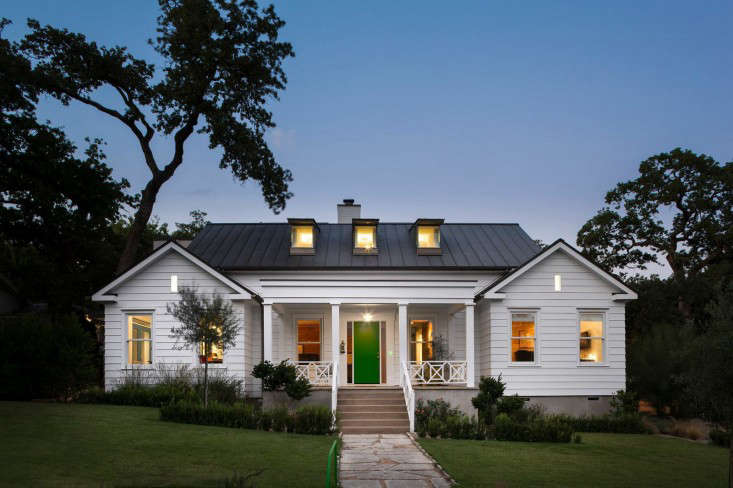 Above: Randolph raised the roofline of the house by three feet, but from the street, the 1935 Greek Revival Cottage looks almost untouched. Three modern dormers that bring light into the shared common space of the teen suite are the only hint of change. 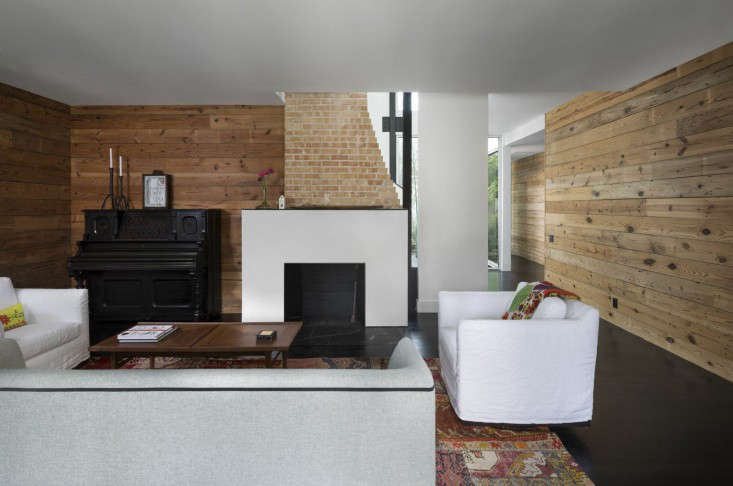 Above: In the living room at the front of the house, one wall and the chimney and fireplace are the only architectural elements that remain in their original locations post-renovation. The wood shiplap siding is reclaimed from the interior walls of the house and the fireplace surround is plaster with a steel trim. 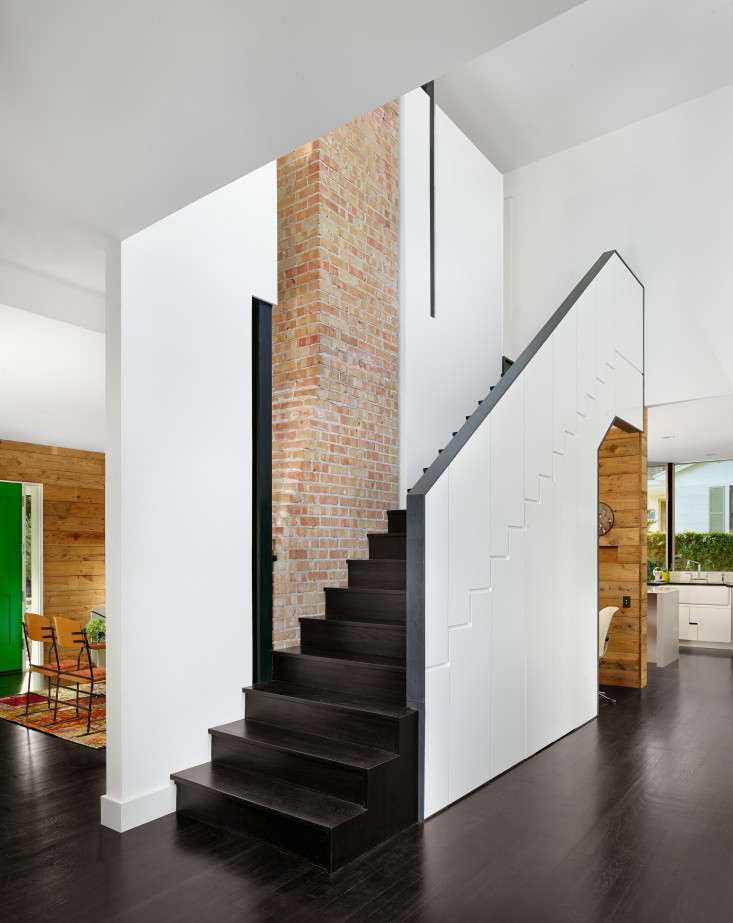 Above: A new stair connects the ground floor to the upper bedrooms and loft. “The chimney is the visual anchor of the back of the house and its modern appearance is a contrast to the more traditional front room of the house,” Randolph says. “We exposed the brick to reveal the history of the existing chimney and its construction.” In the spirit of maximizing space, Randolph also managed to fit an office and closet underneath the stairs (see below). Ebony-stained oak was used on the stairs and floors. Photograph by Casey Dunn. 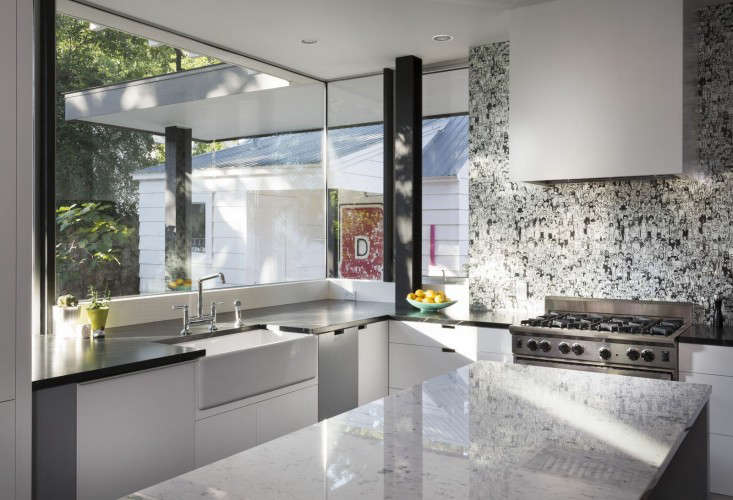 Above: Situated in the back of the house, the kitchen has modern windows that extend straight to the ceiling. A soapstone countertop contrasts with the Carrara marble used on the island. The building beyond is a garage now used as a workshop. 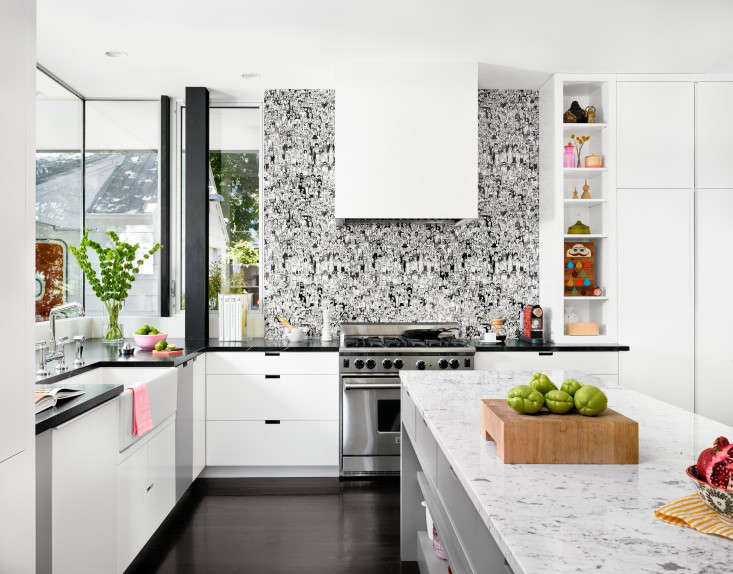 Above: The stove wall backsplash is wallpaper depicting a black-and-white crowd scene; it’s protected with a glass panel. The hood was custom made of MDF and painted to match the cabinets. Photograph by Casey Dunn. 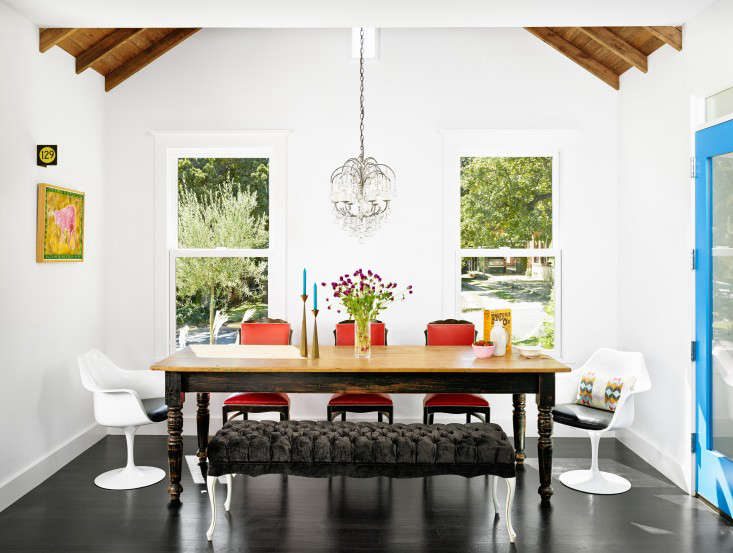 Above: The dining area at the front of the house has a more traditional look, enhanced by a newly added exposed wood ceiling. Photograph by Casey Dunn. 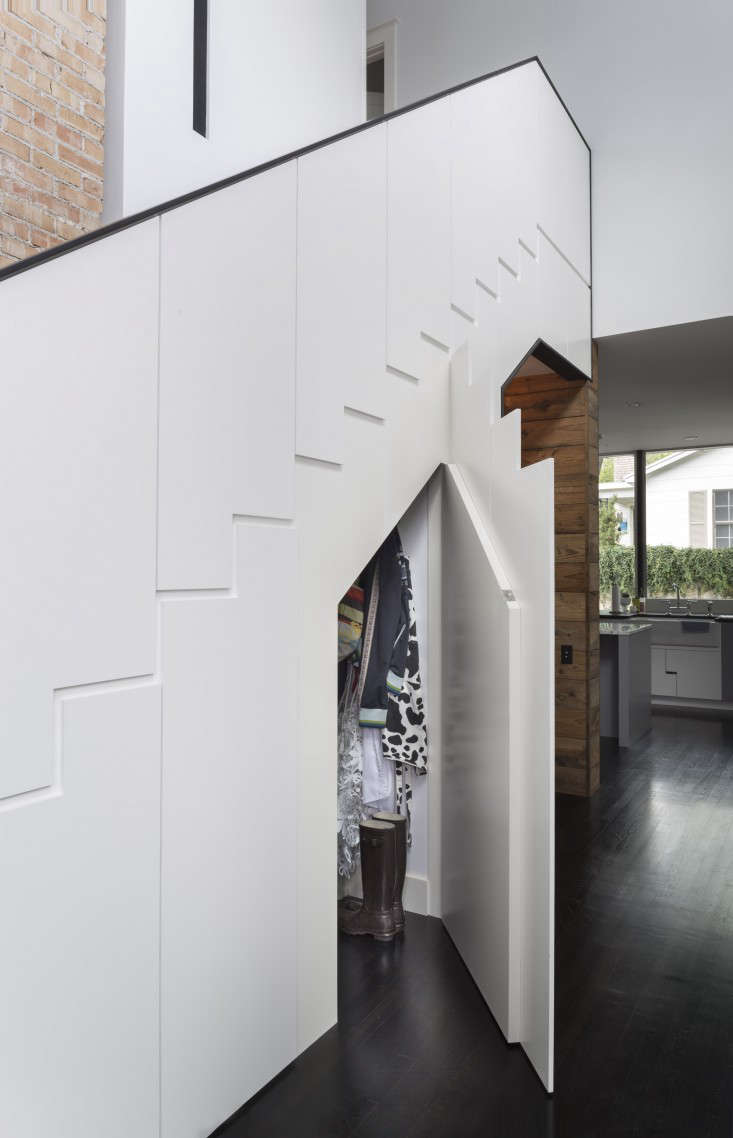 Above: “We evolved the design during construction to change from an open stair rail to the solid white panels we now have,” Randolph says. “This allowed the storage closet door to be more fully integrated and also helped to make the stair more of a sculptural object.” 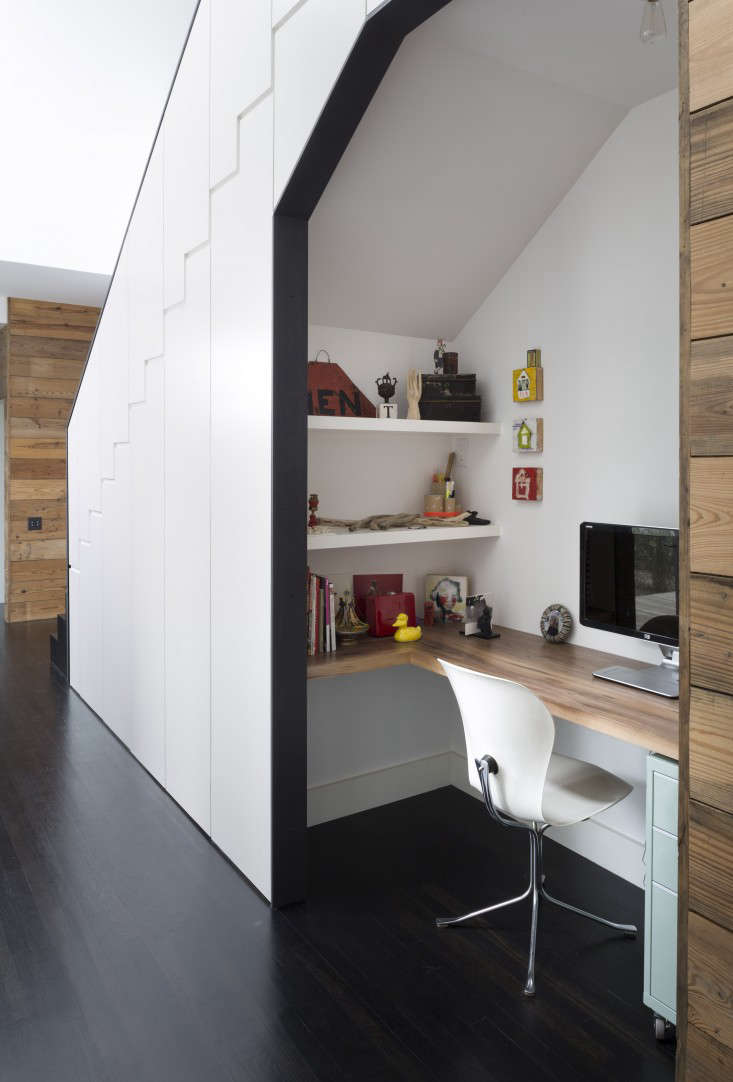 Above: The space under the stair is near the kitchen and an active area of the house. “It made sense for this to be the wife’s desk area because she wanted to be near the rest of the family,” Randolph says. “She has an amazing, eclectic sense of style and was the lead on the interior design decisions.” The office dimensions are approximately 3 feet, 8 inches by 6 feet; the ceiling height goes from 5 feet, 10 inches at its lowest up to 8 feet. 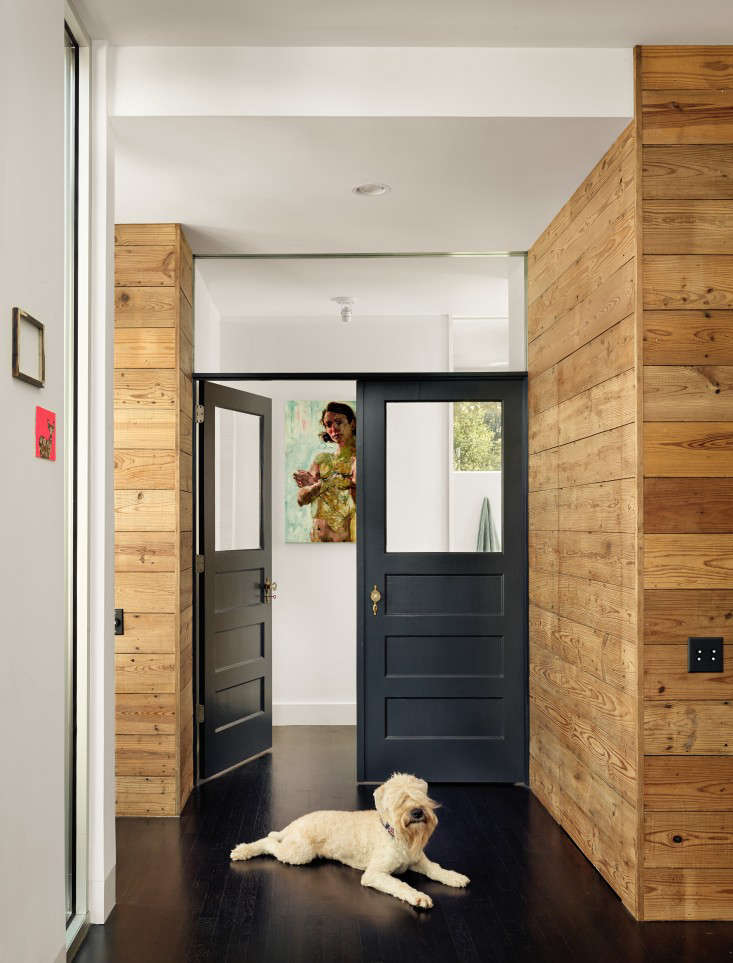 Above: Vintage, half-glazed doors bring light from the stair hall, sheathed in shiplap siding, into the hall of the master bedroom suite. Photograph by Casey Dunn. 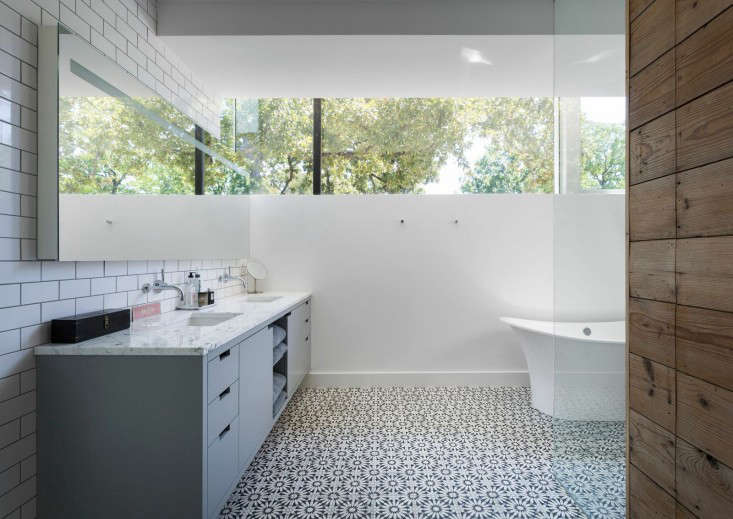 Above: Like the kitchen, the windows in the master bath run up to the ceiling. 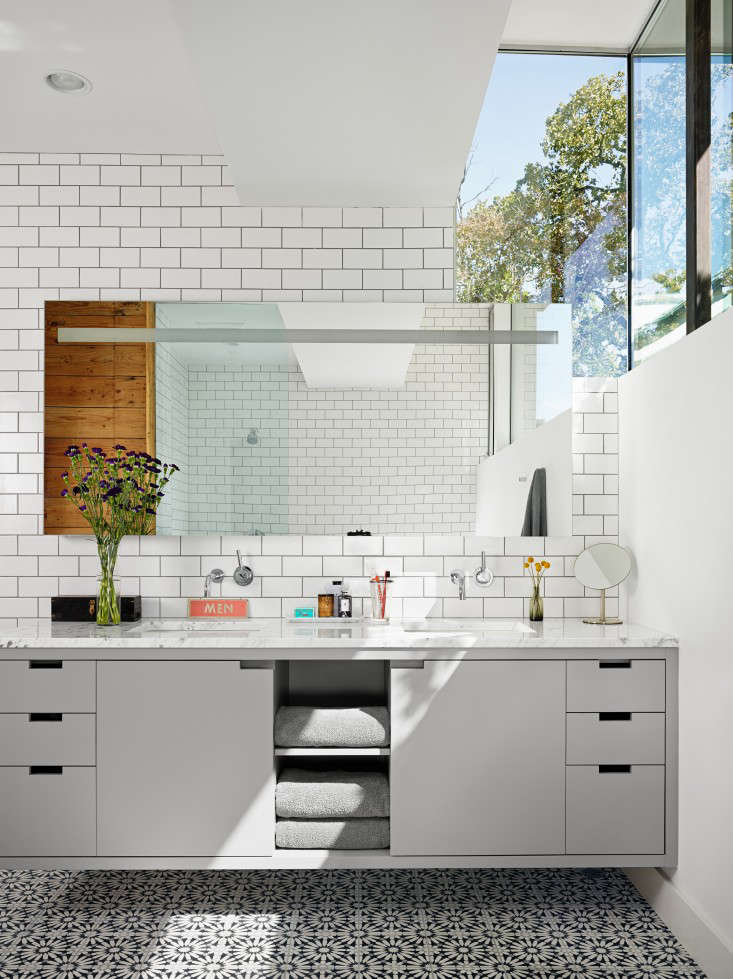 Above: Randolph designed the custom vanity, and his client selected the subway tiles on the walls and the patterned tiles on the floor. Photograph by Casey Dunn. 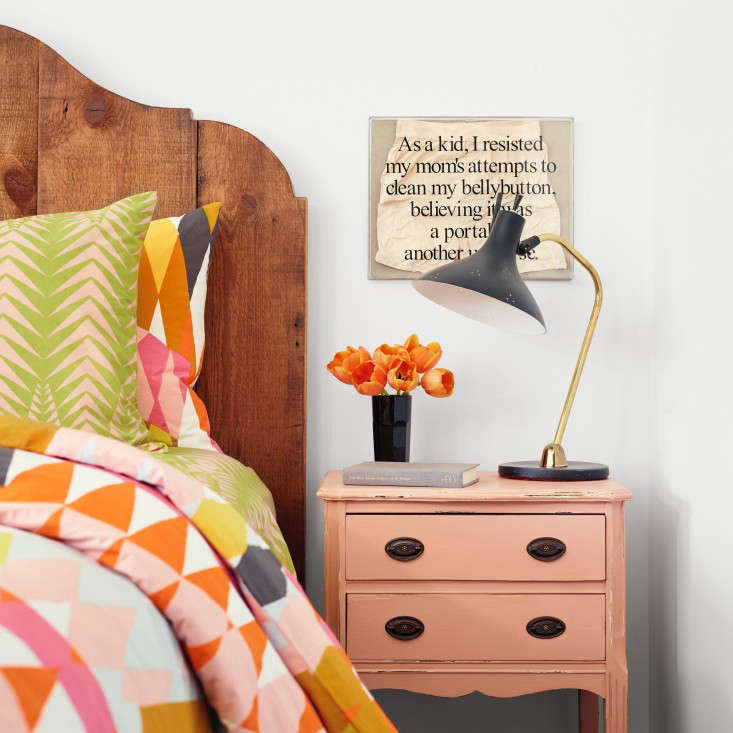 Above: The headboard in the master bedroom ties into the shiplap paneling that appears throughout the house. Photograph by Casey Dunn. 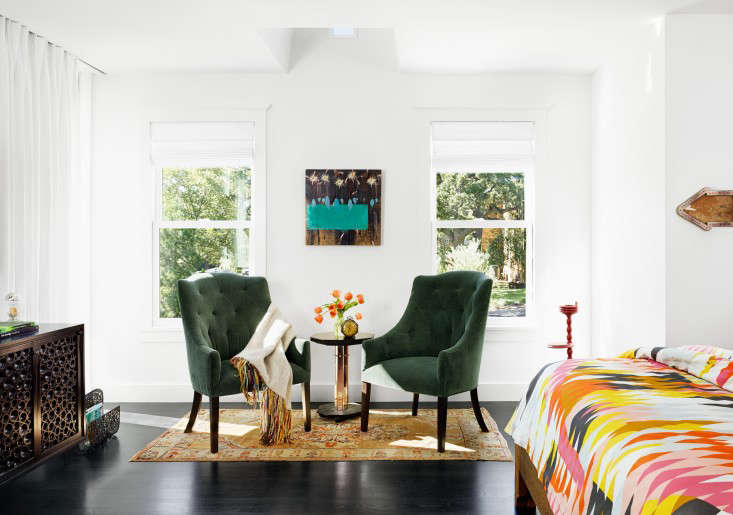 Above: The master bedroom is at the front of the house, which retains its original window proportions. A sitting area with twin club chairs makes good use of the light. Photograph by Casey Dunn. 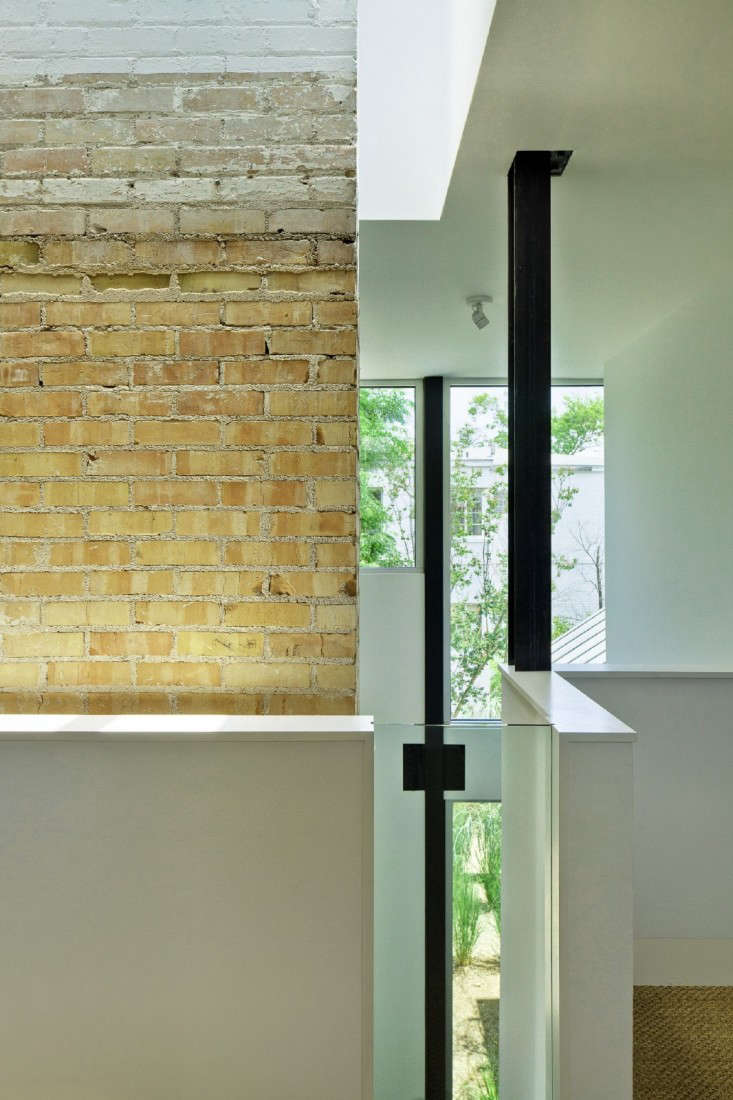 Above: “The changing brick textures of the chimney act as a record of the changes that have been made to the house,” says Randolph. “By preserving the old white paint on the upper portion of the chimney that previously went through the roof, we were showing another evolution of the old and new.” Photograph by Patrick Wong. 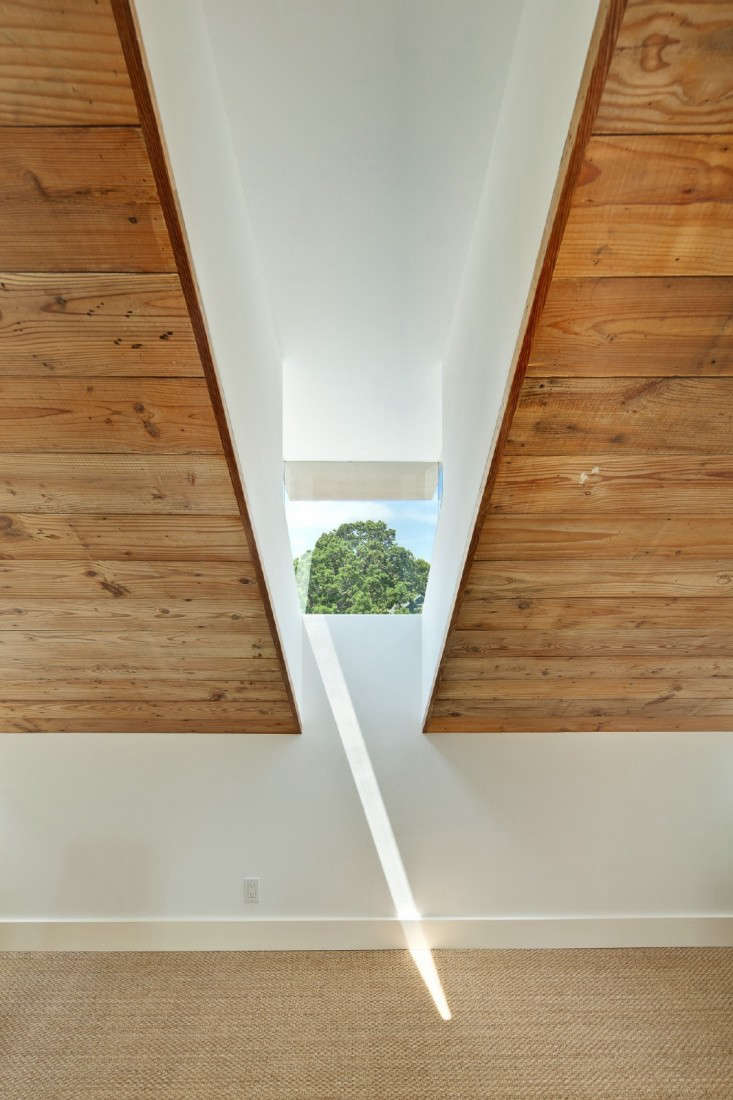 Above: The new modern dormers on the front of the house bring shafts of light into the shared loft in the teen suite. Photograph by Patrick Wong. 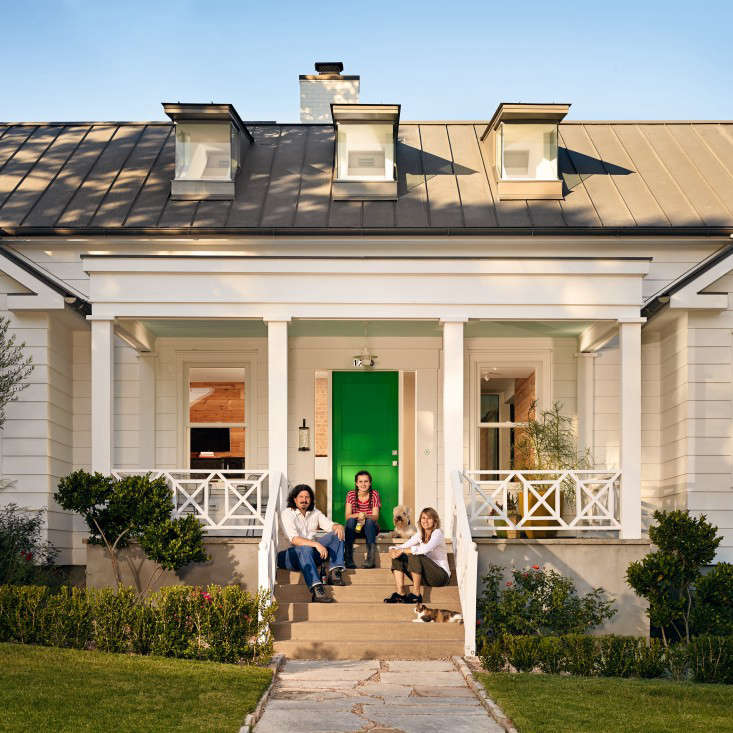 Above: Three of the four family members and their pets enjoy the front porch. The new standing seam metal roof has a paint-grip galvanized finish. In Hardscaping 101: Standing Seam Metal Roofs, learn about this option that’s a favorite of architects. Photograph by Casey Dunn. 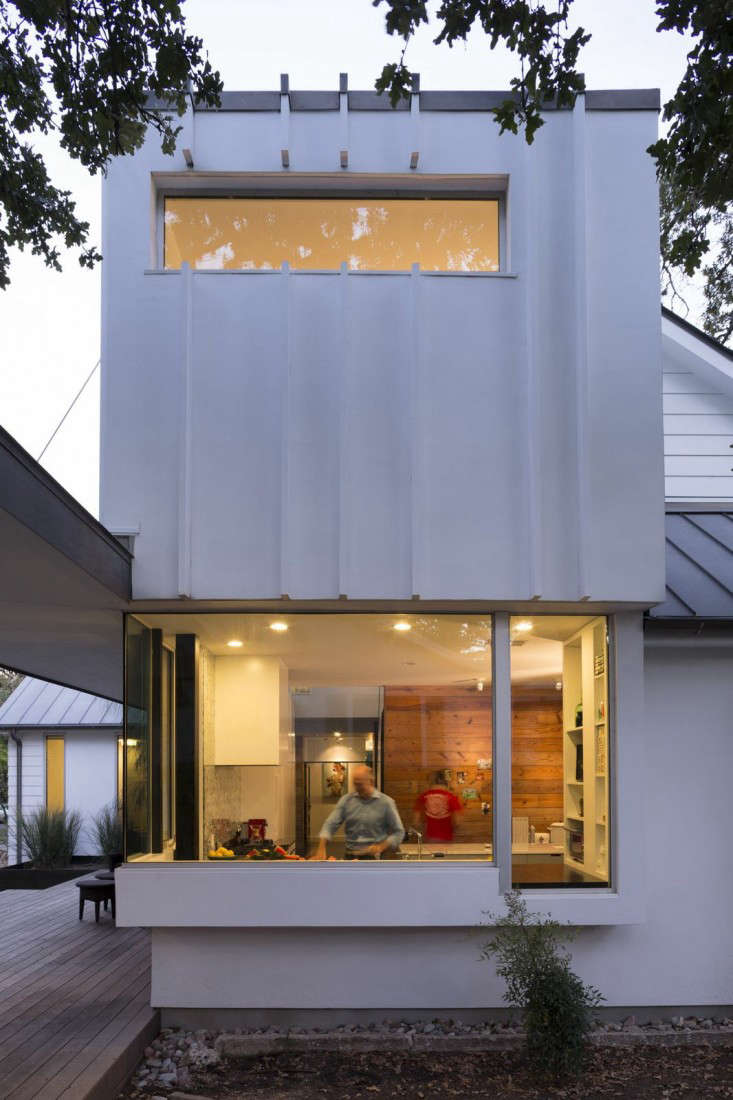 Above: In the back, the kitchen and one of the second-story bedrooms are stacked to form a double-height modern box within the existing footprint of the house. 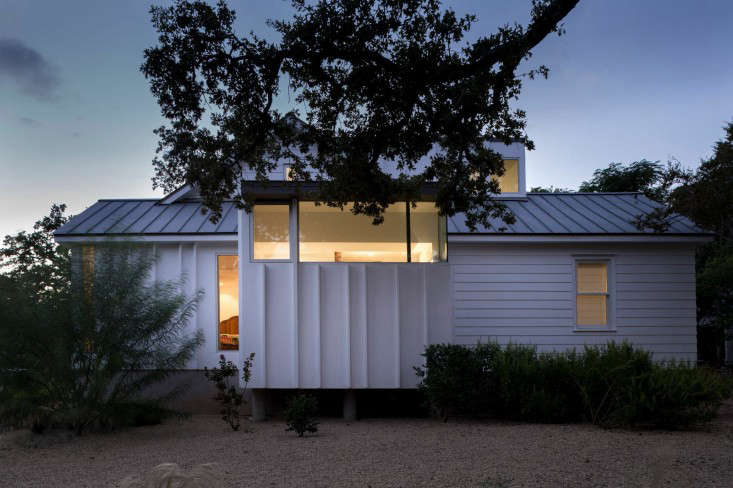 Above: A single-story block that holds the master bathroom is the only new build that breaks out of the existing footprint of the house. Randolph created vertical baffles made of square aluminum tubes and placed them on the new modern sections of the house. “We wanted to refer to the rhythm of the old horizontal siding without matching it,” Randolph says. “Like the old siding, the baffles cast shadows on the walls and create visual interest and change throughout the day.” 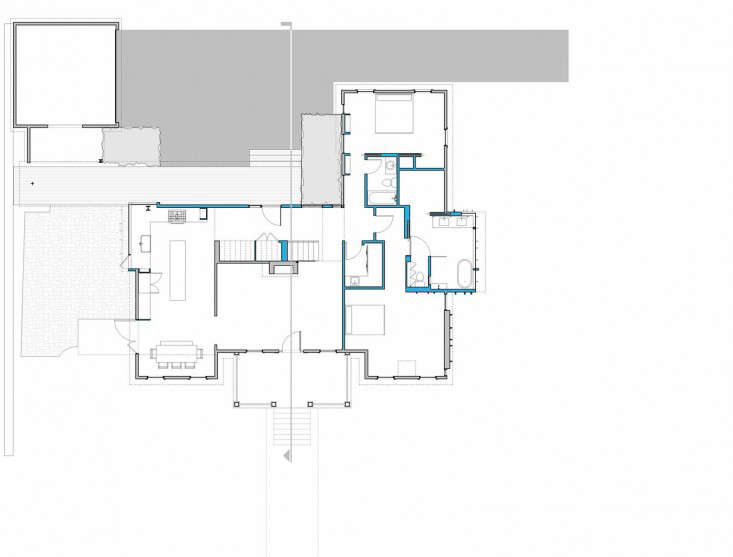 Above: The ground-floor plan. The blue walls indicate new construction. 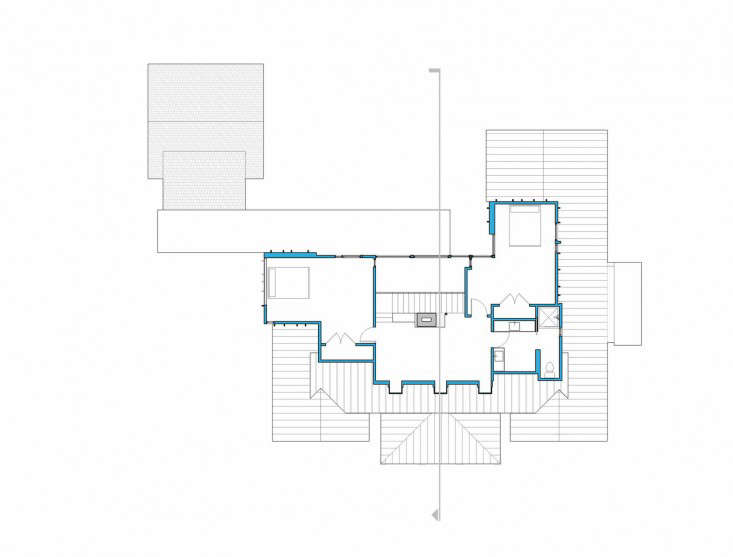 Above: The floor plan of the upper level showing the teen suite with its two bedrooms and shared loft space at the front. 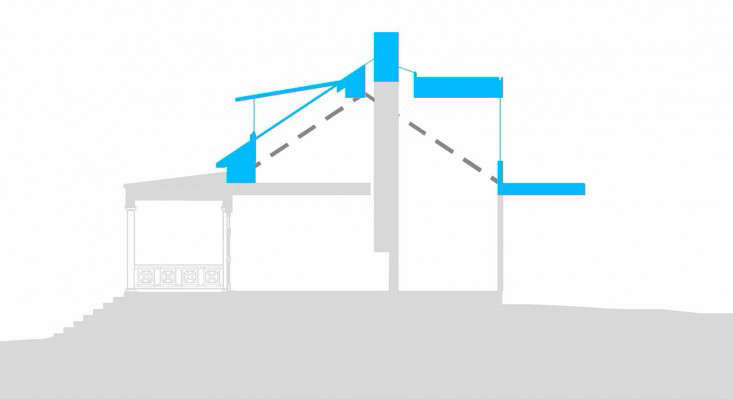 Above: A diagram illustrates how Randolph found extra headroom in the attic by raising the roof in the front and creating flat roofs in the back. 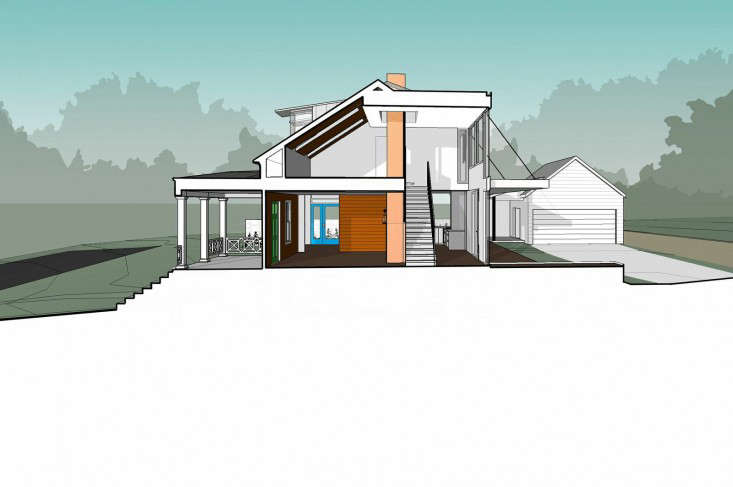 Above: The chimney becomes a dividing line in the house between the traditional and the modern. 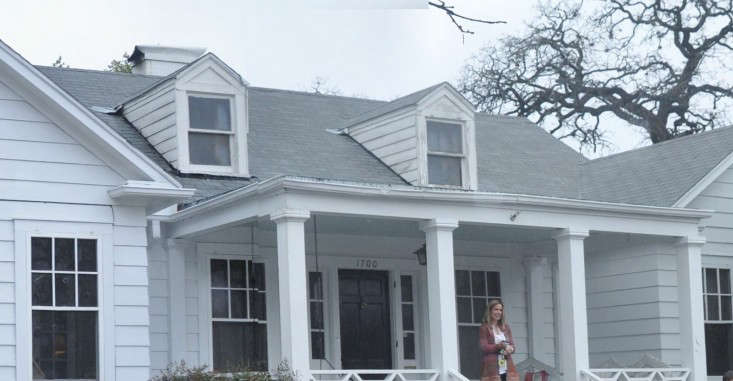 Above: The house as it appeared when it was first purchased. 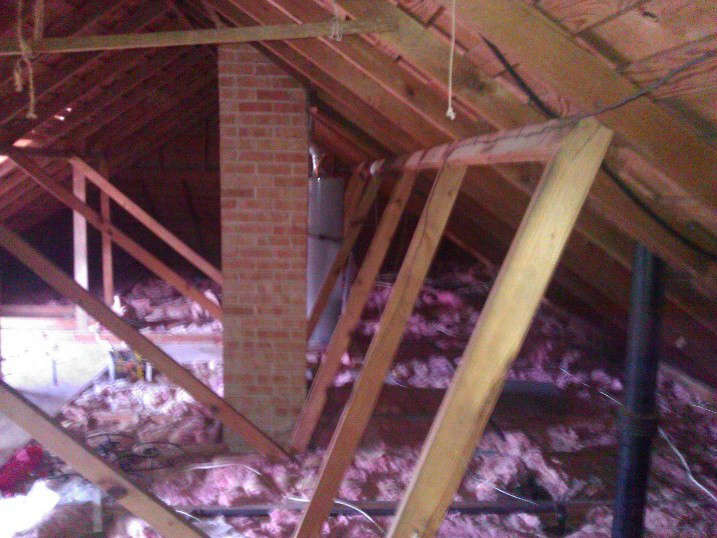 Above: The attic space into which Randolph fit two bedrooms and a shared loft. 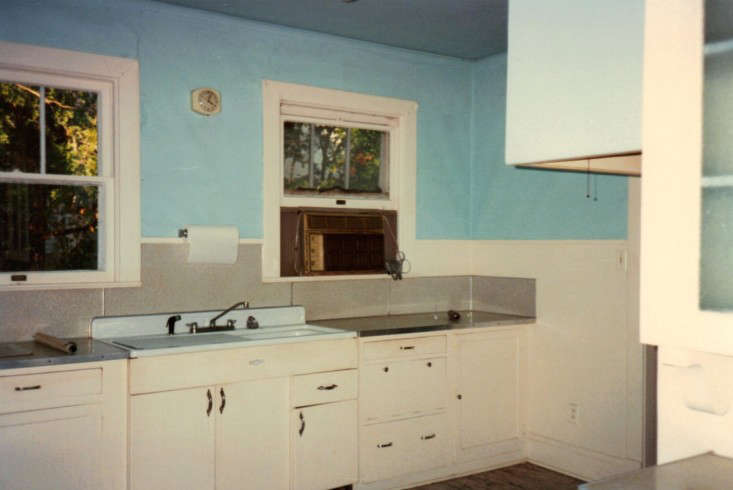 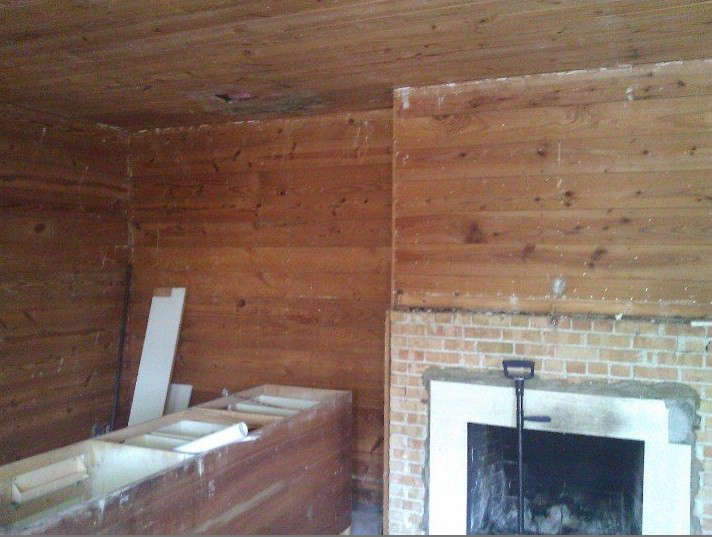 Above: A view of the original living room paneled with shiplap siding. 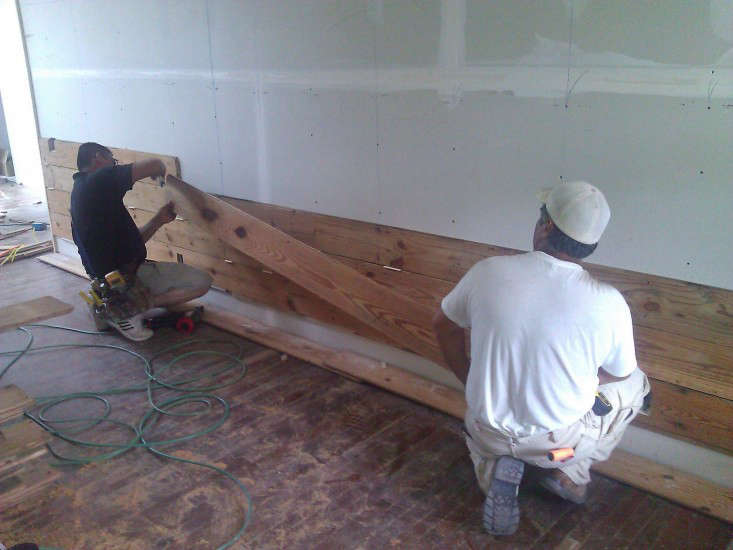 Above: Installing the reclaimed shiplap siding during the renovation.

N.B. All Before images are from Keeping the Pease, a blog the husband wrote to document the renovation.

Hugh Randolph shares addidtional thoughts on the project in this video.

Current Obsessions: To Market, To Market