This weekend Jennifer Beningfield, founding principal of London’s Openstudio Architects and a member of the Remodelista Architect/Designer Directory, talks to us about a passive solar house she designed in the Great Karoo, a semidesert region of South Africa. She’ll be available for the next 48 hours to answer any and all questions about her design solution. Ask away!

The Scenario: A family of stargazers want to build an energy-efficient vacation place in a faraway location that is the antithesis of their home in London. They choose the remote, semidesert region of the Great Karoo in South Africa thanks to its cloudless skies and dark nights–perfect for stargazing.

The Solution: Beningfield turns to the age-old principles of passive solar building design to create a house that heats and cools itself–without technology.

The Result: A green house that responds to the site’s dramatic landscape and climate, harvesting its own energy. And the stars? They, too, have a say in Beningfield’s design. “The positions of the windows and shutters in the house are linked to the constellations,” she says. “These openings are also light sources at night, so they tie the details of the house to the night skies.”

For the next 48 hours, Beningfield is available to answer any and all questions. Ask away!

Above: The site conditions–sun angles, the surrounding Swartberg mountain range, and harsh temperatures– determined that the house have an east-west orientation and an irregular floor plan (with spaces at varying heights). It also helped determine the choice of brick and concrete, building materials with a high thermal mass. 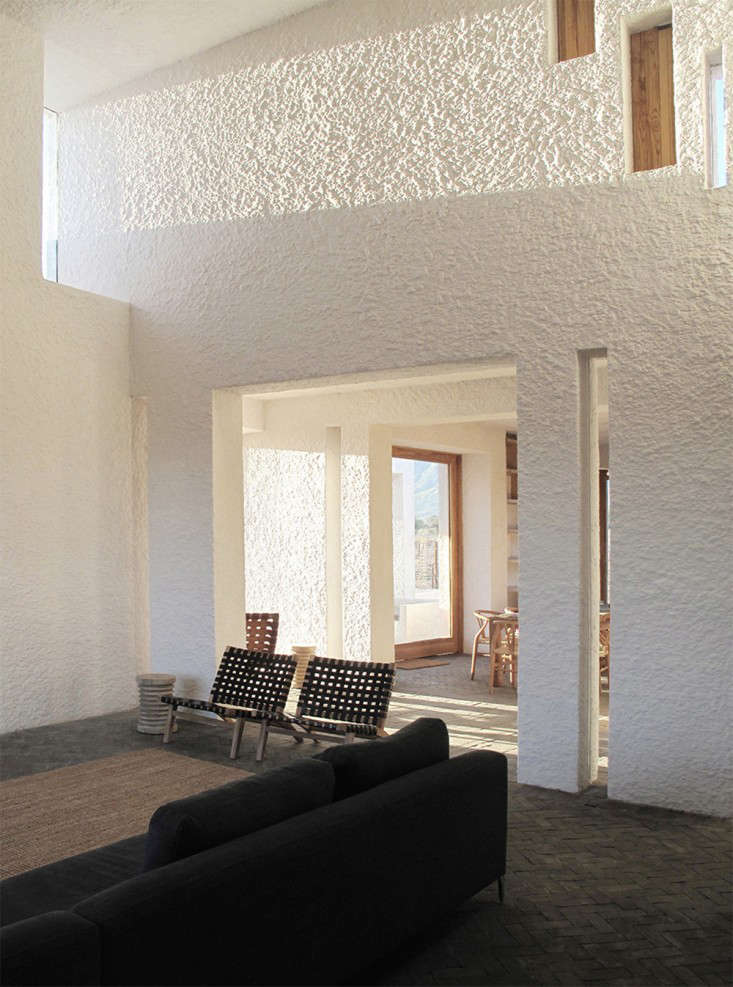 Above: The limited materials palette unfolds in the living spaces, where the finish on the walls is the same limewash-on-rough-cast plaster that’s on the exterior. The dark bricks are laid on edge in a herringbone pattern and the ash window frames hint at more warm accents to come. The pair of Wood and Leather Ashanti Chairs are from Weylandts, a Namibian/South African furniture company. 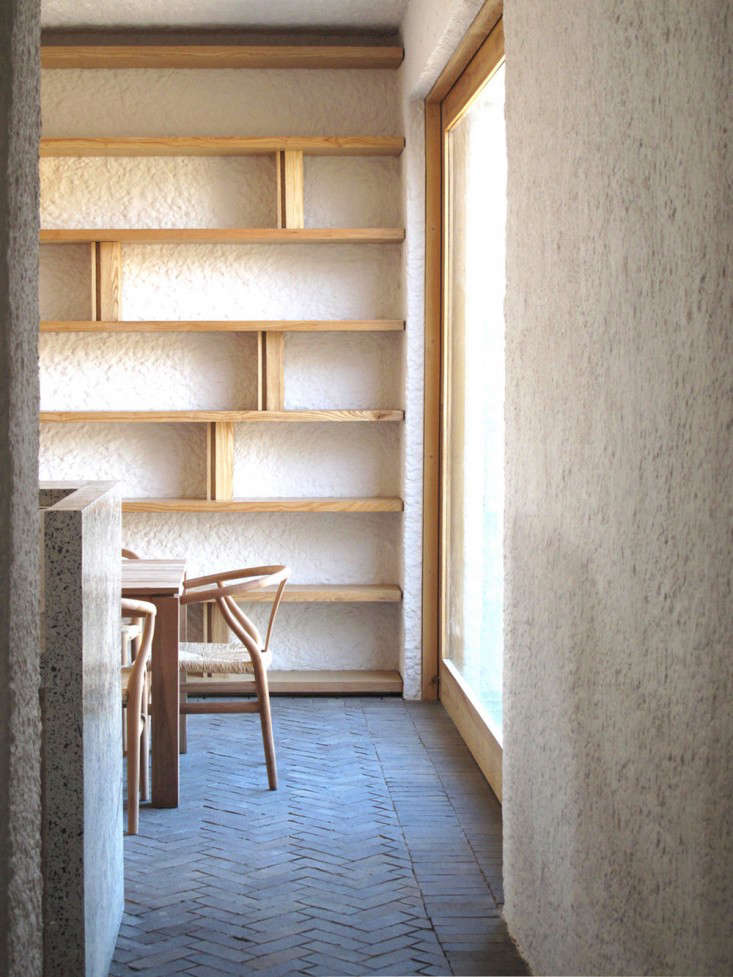 Above: Ash reappears in the dining room, where it’s used for bookshelves. The vertical supports echo the building’s slot-shaped openings and incorporate LED lighting strips. “There are no surface-mounted light fittings in the house; all the lights are integrated into the architecture or joinery details,” says Beningfield. “We lowered the energy consumption of the house by limiting devices that consume power.” 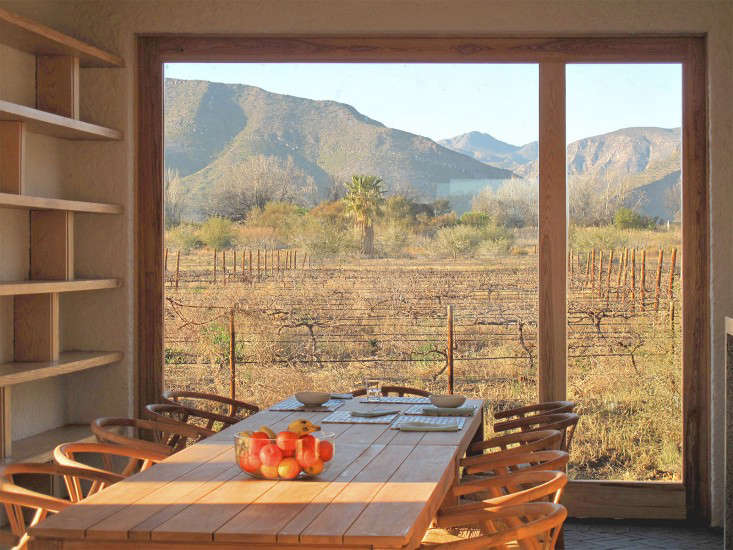 Above: In the dining room, the view is to the south, across a neighbor’s vineyard and toward the Swartberg mountains. The teak Hans Wegner–inspired Shanghai Chairs are also from Weylandts. 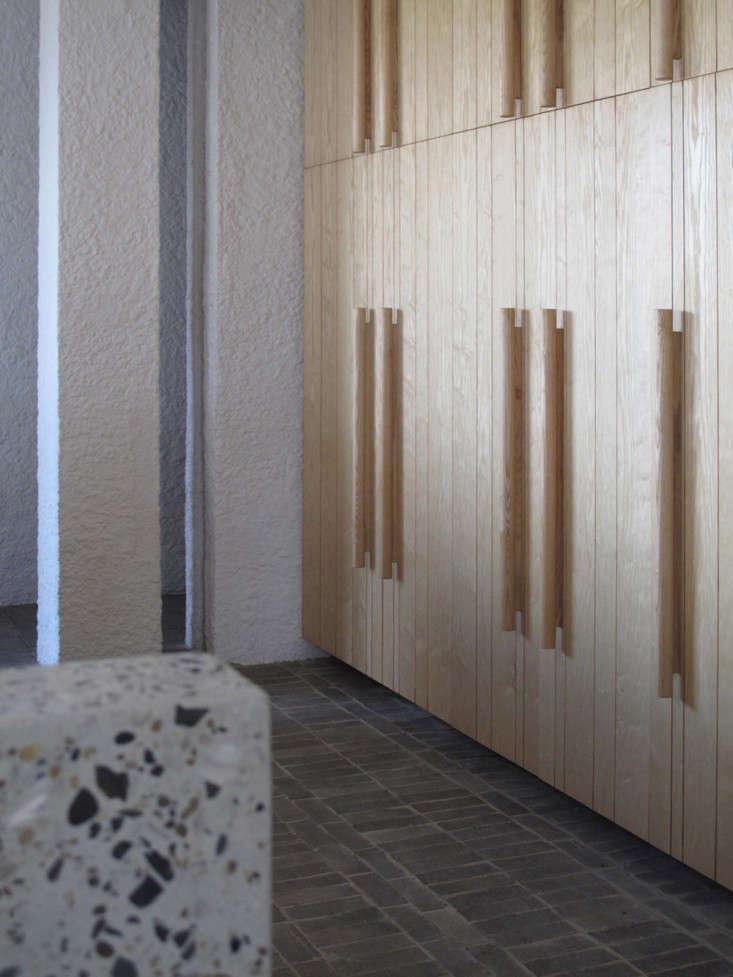 Above: In the kitchen, the cabinets are faced with ash veneer and have turned handles of solid ash. The dark brick floor is in contrast to the living room’s herringbone. “The brick floor is just a paving brick laid on edge, but we were very careful about the patterns in which it has been laid,” says Beningfield. “This is how we added texture and complexity to the building.” 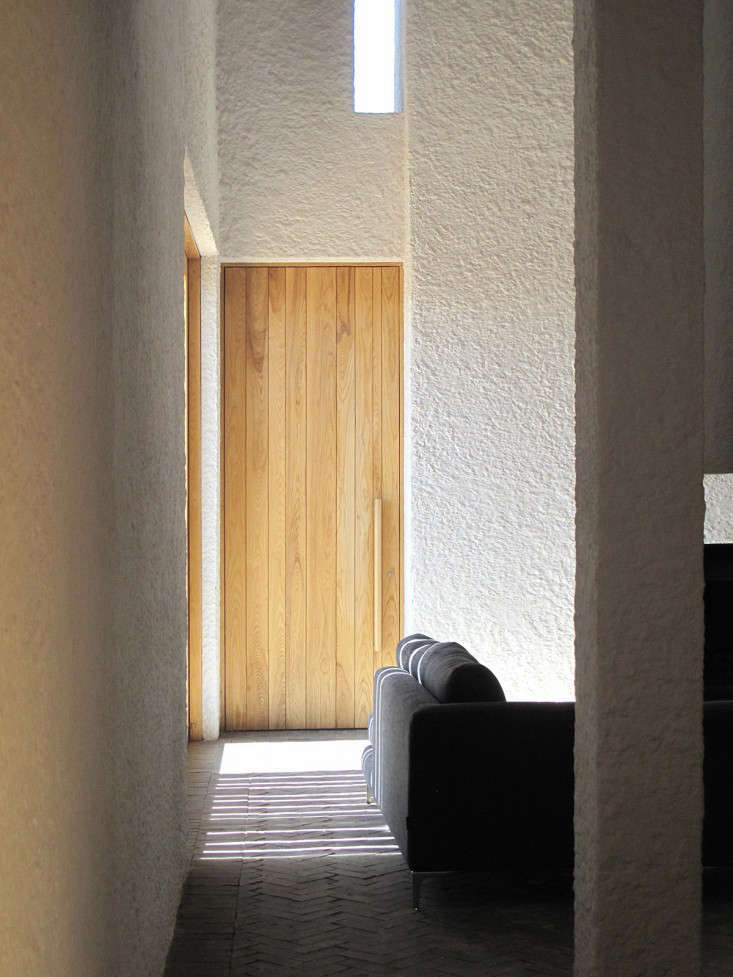 Above: In the winter afternoon sun, shadows from an external wood shutter are cast on the brick floor in the living room. “The light patterns in this house are always moving,” Beningfield says. “As the house acts to intensify light and to modulate heat and cold, its inhabitants are highly attuned to living in the natural world.” 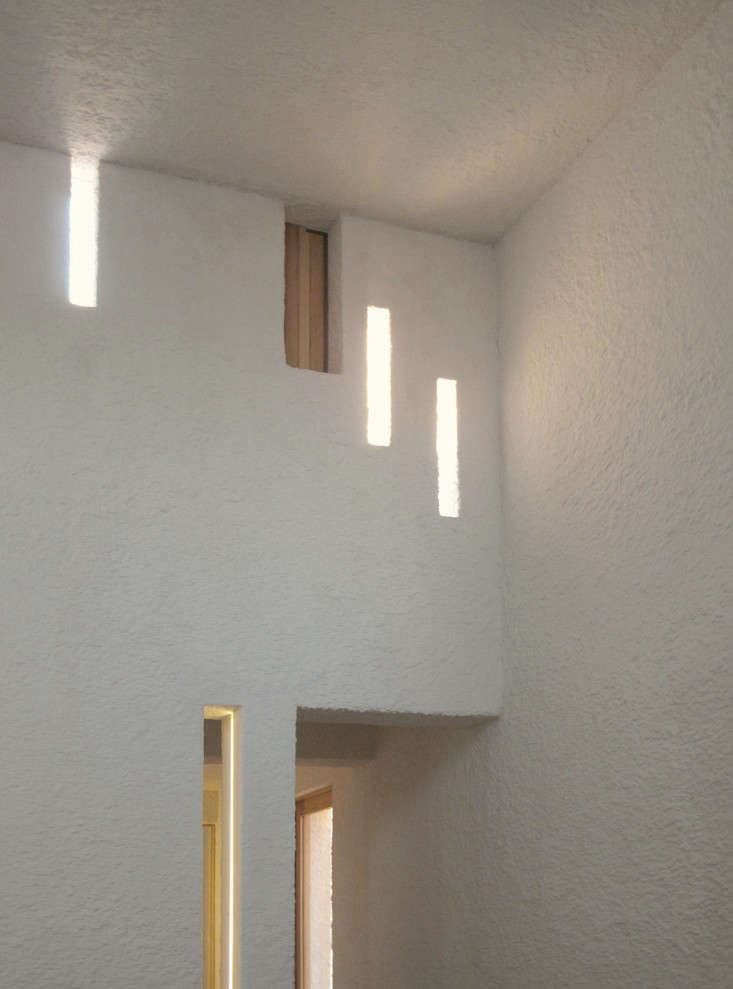 Above: “In the summer, a cooling wind blows from the mountains, and the tall spaces of the living room and library have high shutters that dissipate hot air during the day and bring in the cooling breeze at night,” says Beningfield. “The small pivoting shutters are used primarily for ventilation, while the slot windows let in slivers of light.”

Above: The minimalist palette continues in the hallway that leads to the master bedroom suite. “I chose ash because it’s a sustainable wood for which we could get certification,” explains Beningfield. “Its lighter color contrasts well with the dark brick, which was chosen because it absorbs heat and is a material that can be used both inside and out. White limewash is a typical material in this area and connects to the history of building in the Karoo.”

Above: In the winter with the shutters open, the dark brick floor collects and stores heats and then radiates it in the evening when it’s cooler. 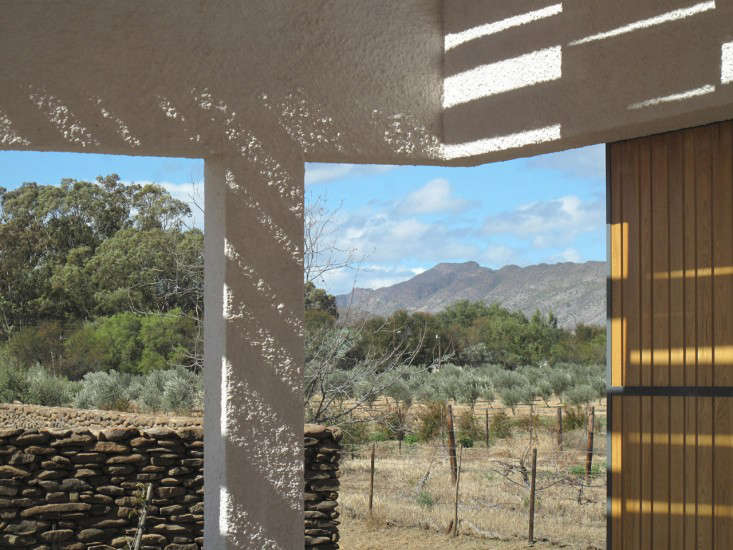 Above: On the terrace, metal-framed, ash shutters slide on bottom-rolling tracks and are used to create shade and a degree of insulation. 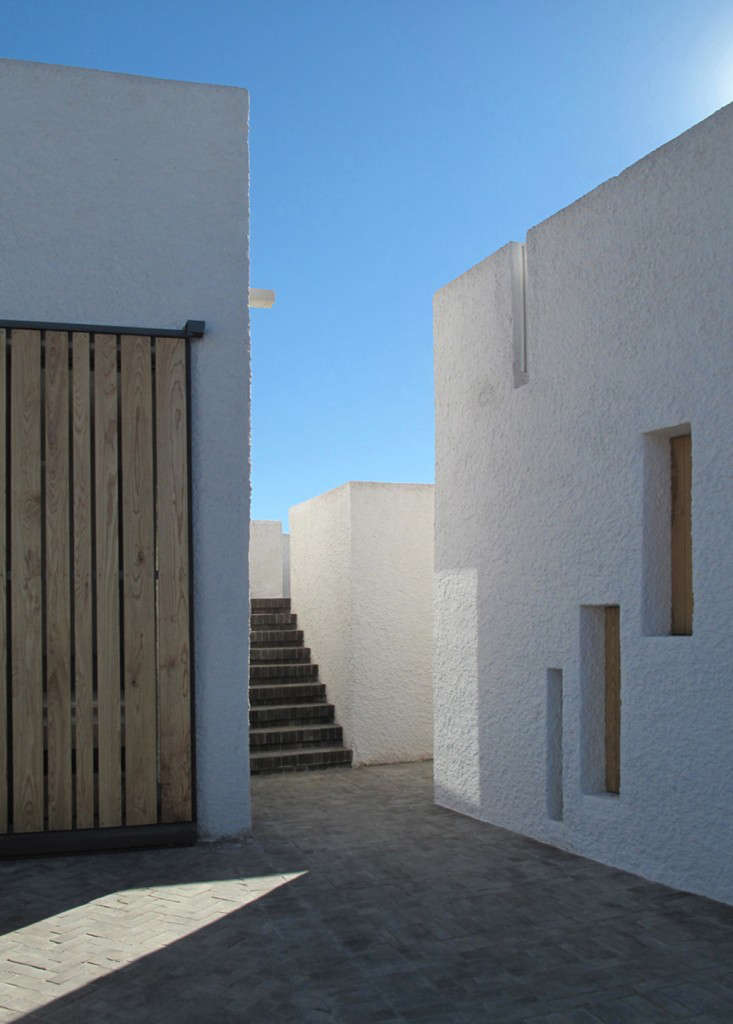 Above: The various volumes of the house were put to use as a rooftop escape: “The owners can retreat into different spaces on the roof depending on the time of day, the season, and how much privacy they’re seeking.” 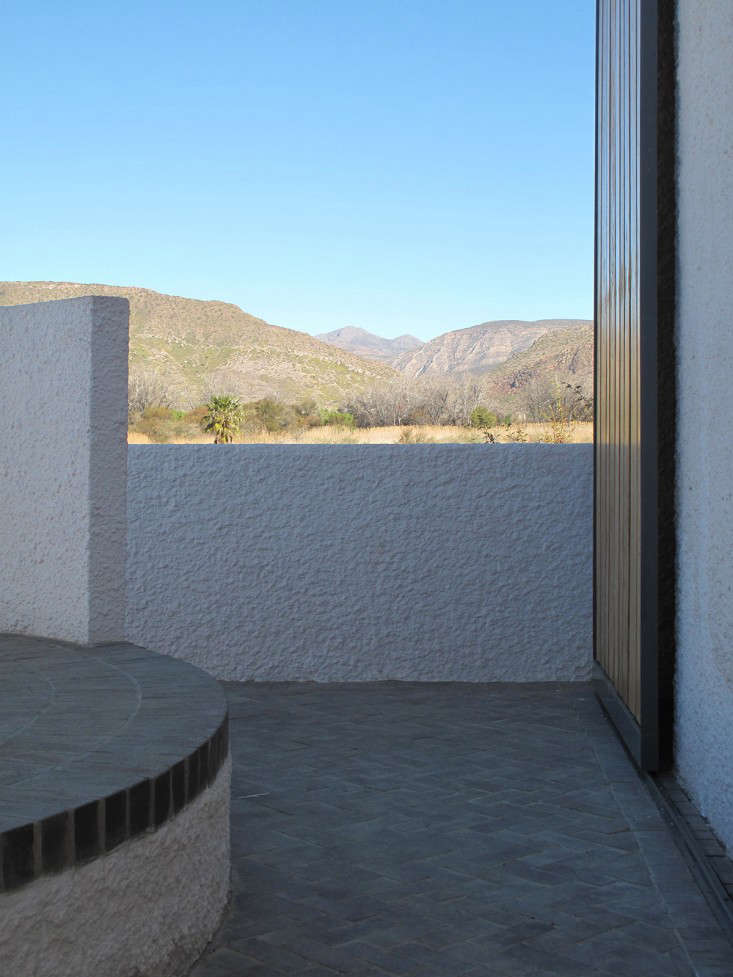 Above: “During the summer, the evenings are warm and the desert sky is full of stars,” says Beningfield. “The roof terrace has a circle of seating that surrounds a fire pit with a partial wall to screen out the strong wind that blows off the mountain. This is a social place where the family can sit out at night and see the whole of the sky.” 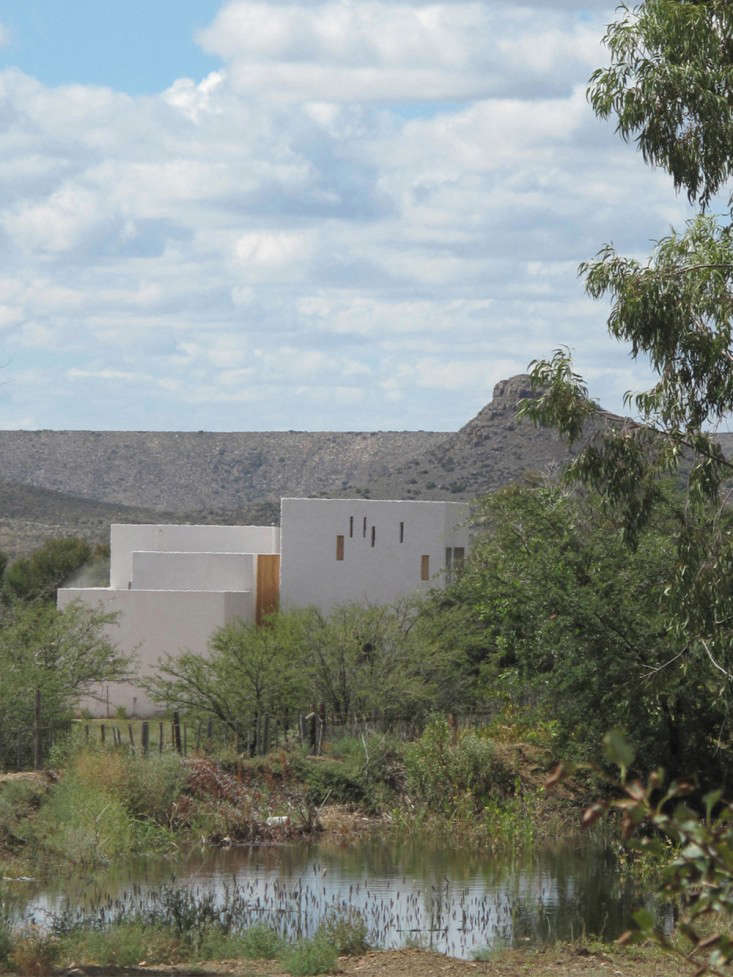 Above: “The house has an interesting scale. It looks small against the mountains but also has a significant presence in the landscape.” Of the western elevation, shown here, Beningfield says, “We didn’t add many openings because the sun is burning hot in the summer.” 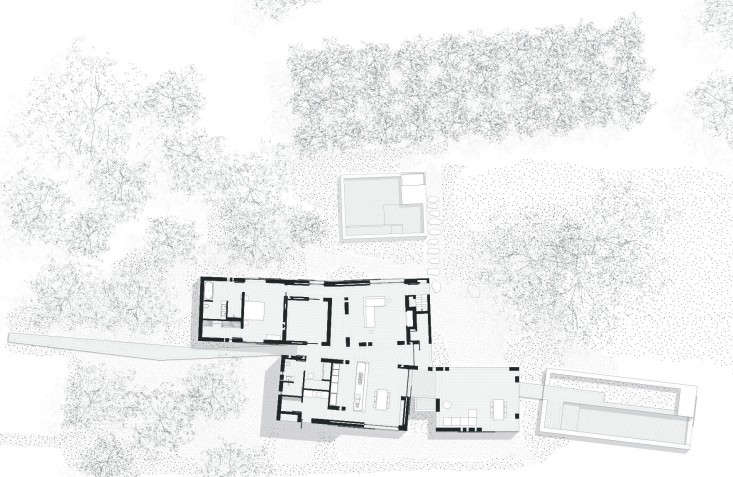 Above: The ground-floor plan of the house illustrates its east-west orientation and irregular floor plan.

Above: The second-floor plan illustrates the separate volumes that form the roofscape, including the circular seating and a long bench that can be used for lying down to take in the stars.

Above: A drawing of the main elevation shows the sliding wood doors that can be closed to block the sun and opened for air circulation.

See other examples of Openstudio’s environmentally thoughtful design in our posts:

Gardenista contributor Marie Viljoen takes us on a tour of her Mother’s Garden Outside Cape Town.

Current Obsessions: Across the Pond