Patrick Williams’ 1850s East London apartment had “laminate flooring, recessed halogens, and cheap and nasty radiators”–until he took over. “It was your typical nineties developer rubbish,” he tells us. “I am feeling rather sick thinking about it.” A devotee of the Arts & Crafts movement’s built-to-last philosophy and an avid salvage hunter-upcycler-philosopher, Williams runs Berdoulat, a design-build firm that takes its name from the old French farmhouse he watched his parents restore throughout his childhood.

After studying fine art at Oxford, Williams worked on a series of remodels himself and went on to found his own firm. His two-bedroom flat is a showcase of the Berdoulat approach: “What drives us is not purely a conservative nostalgia, but a love of truth and a dedication to the creation of beautiful, unique, well-crafted products,” he writes in the company manifesto, and points out that secondhand shops sell well-made items at prices comparable to Ikea’s. Williams now shares his place with his wife, Neri Kamcili, a fine art photographer, and their two young daughters. No signs of laminate in sight. 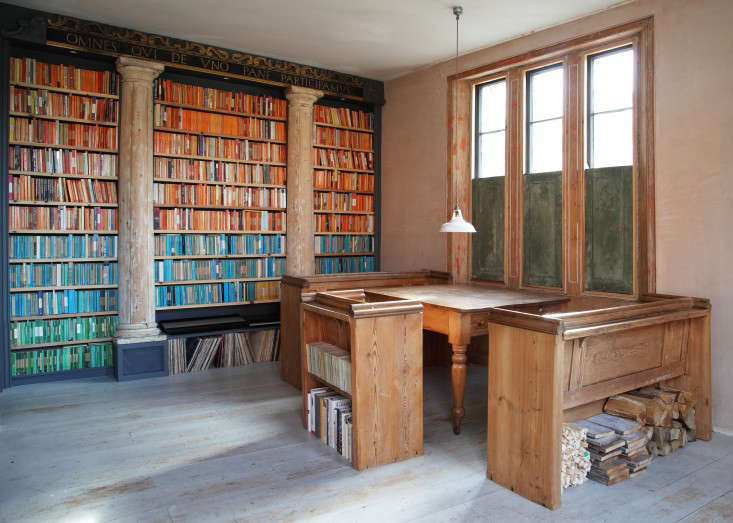 Above: The open living/dining area is anchored by Williams’ vast Penguin paperbacks library. “I have collected Penguins all my life, but the vast majority of the collection (which now amounts to about 5,500 books) comes from one source: My English teacher from school sold them all to me, charging a price by the yard. His father had worked as a salasman for Penguin in the 50s, 60s and 70s, and brought home countless copies every week, many of them first editions. They’re ordered by color–fiction has orange spines, crime green, nonfiction blue, classics black, and so on.”

The shelves themselves are pine; the dark gray, which appears throughout the flat, is Down Pipe from Farrow & Ball, Williams’ “all-time favorite paint color.” The pilasters are made from a salvaged porch pillar. 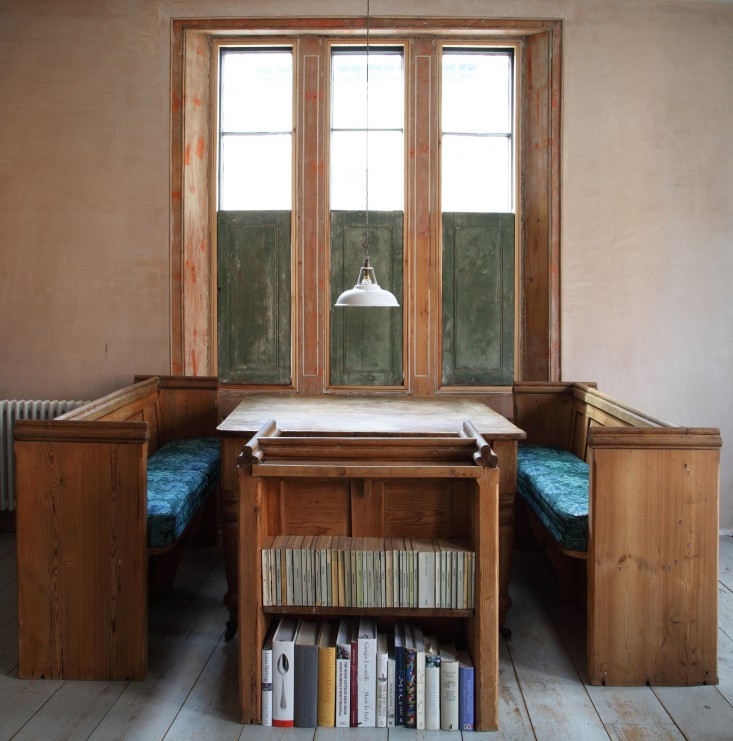 Above: The seating arrangement consists of church pews from ARC reclamation in Petersfield, Hampshire–”one of the best salvage yards in the UK”–sized to fit an eBay table. The walls are newly plastered and finished with two coats of clear beeswax. 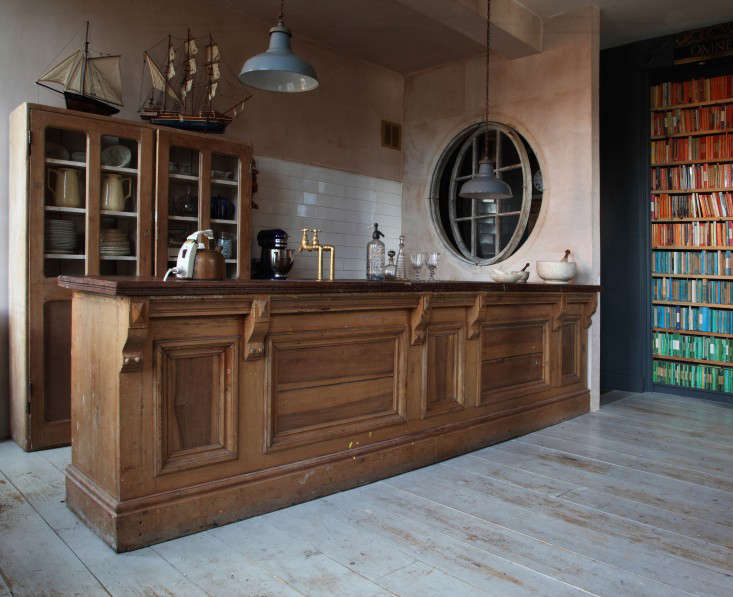 Above: The kitchen counter came out of an old pottery. Patrick laid the new square-edge pine floors himself–”I find it extremely cathartic creating a new level surface”–and painted them with watered-down floor paint, “no primer or undercoat, so that it would purposefully acquire patina and wear.” 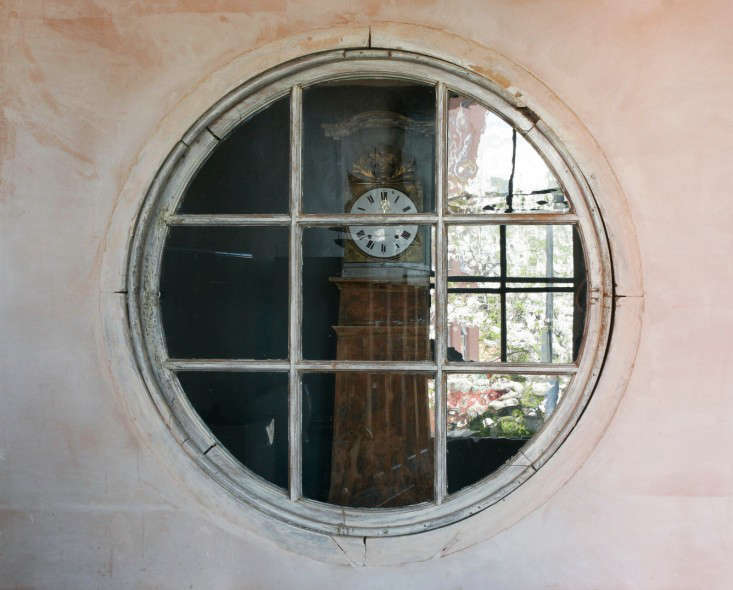 Above: A salvaged circular window opens the kitchen to the hall and draws light into the space. “It pivoted horizontally in its original life, but I turned it 90 degrees, so it better communicates with the hallway.”

Here’s what Williams has to say on the subject of windows: “Berdoulat is passionate about sash windows and abhors the UPVC replacements, which are slowly but surely ruining many period buildings across the land.” To “help raise awareness about the plight of the native sash,” he designed a Save Our Sashes from Plastic Surgery T-shirt that he sells on his site. 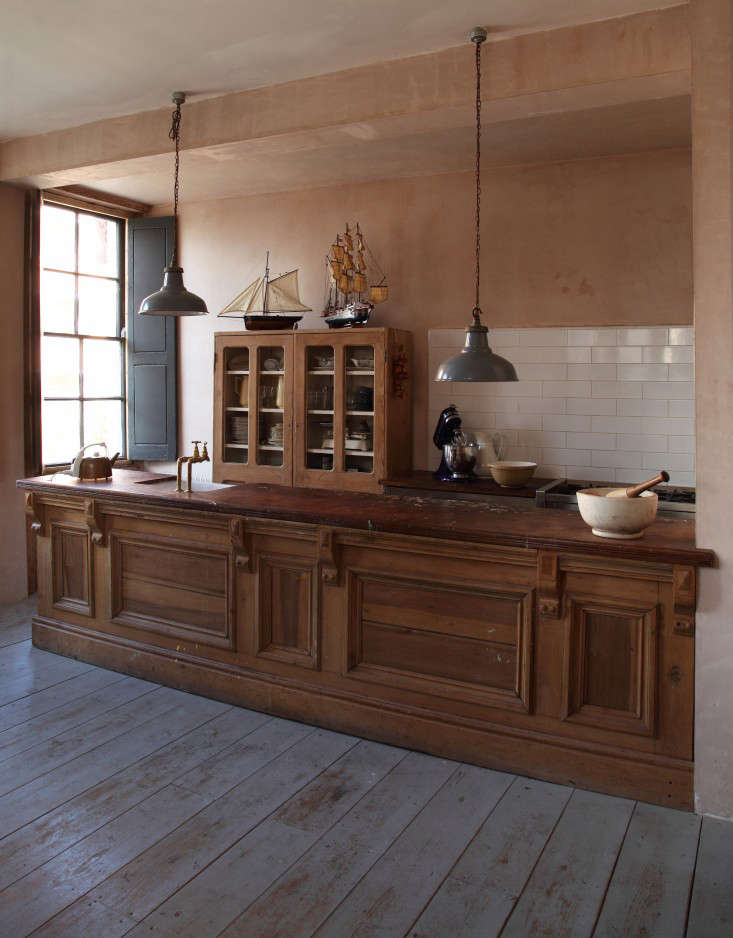 Above: The kitchen’s brass taps came from “a wonderful man in Bidford on Avon who restores brassware.” Ship models–a present from Kamcili–rest on a cupboard that came out of a school in Dulwich. 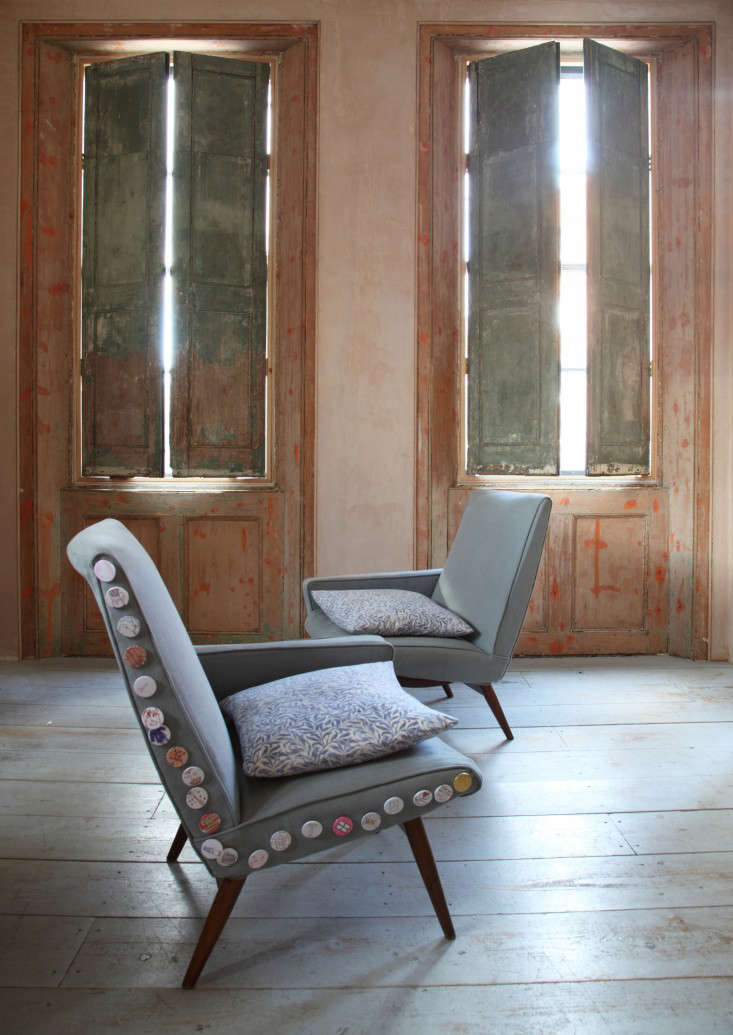 Above: Williams introduced old shutters and paneling to his windows: “I got hold of six matching panels from a salvage yard in Petersfield–Georgian, with original green paint on them,” he writes in the Berdoulat blog. “I butchered them such that I got three pairs the right height for the three sashes in the living room, and the off-cut panels make up half-height shutters for the triple-sash window on the other wall. On their front sides, it’s not easy to see where I have doctored them, but on their backs I have needed to add in sections of new wood, which are more obvious. So I have painted the backs in Down Pipe.”

The midcentury Parker Knoll chairs are adorned with bawdy badges made for Williams by friends during his 30th birthday party. 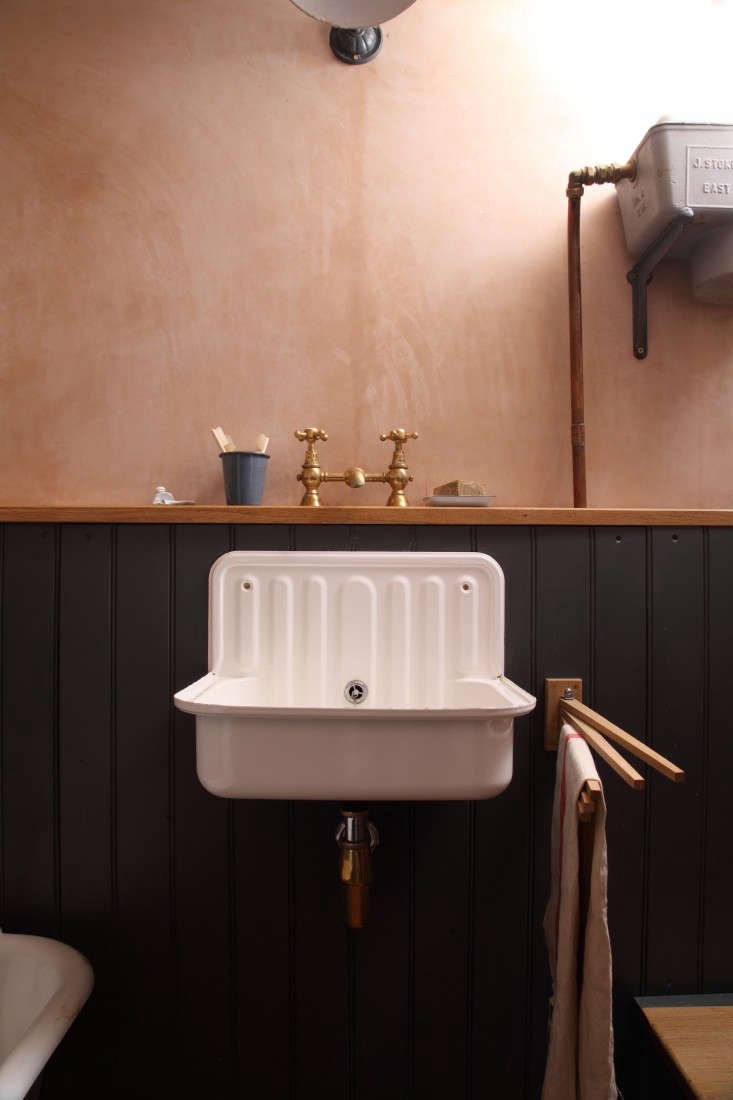 Above: The bathroom–”a real case of out with the new and in with the old”–has a classic Alape utility sink bought at Labour & Wait, plastic edge trim removed. (Read all about the basin and find sources in Design Sleuth: The Alape Bucket Sink from Germany.) Find a similar Oak Towel Rack at Ancient Industries. Like the enamel toothbrush cup? Take a look at Falcon Enamelware from the UK and Barn Light Electric’s Enamelware Made in the US. 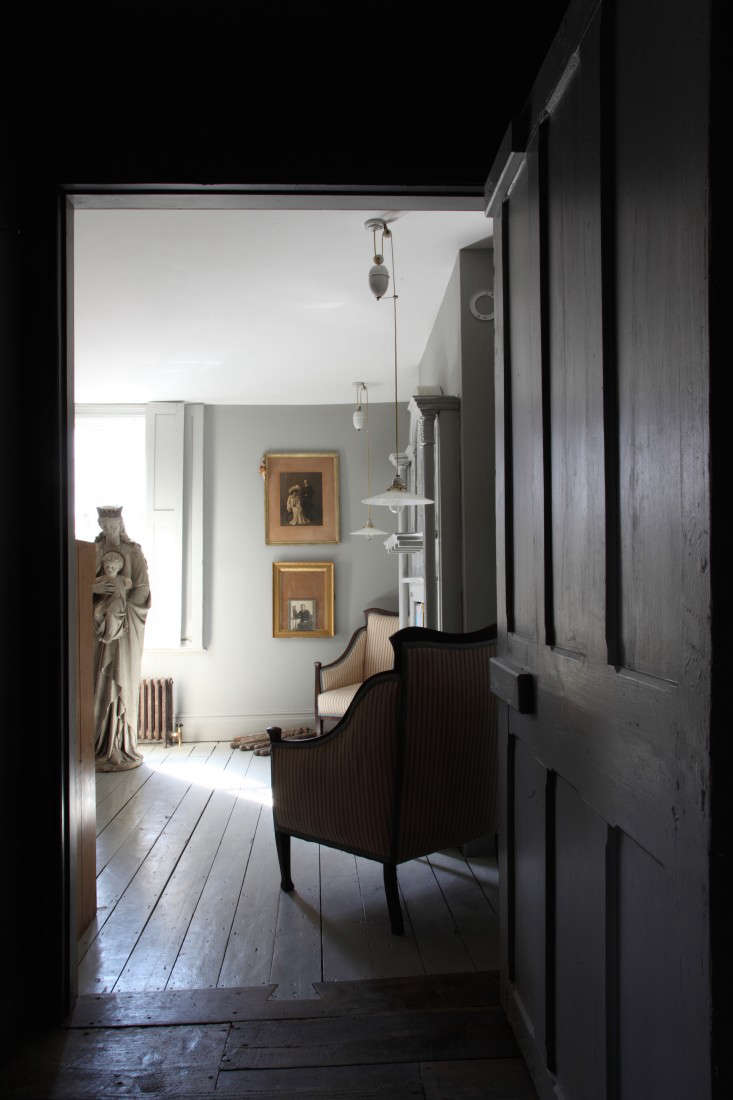 Above: A widened doorway with an antique door in Down Pipe leads to the master bedroom. Williams found the Victorian pine flooring on eBay: “I bid on a Friday night; the auction ended at 11 p.m. and I emailed the seller. He called me straight away and we arranged for collection the following morning at 8 a.m. I loaded the whole floor into and onto my car, drove home very slowly, offloaded, started to lay the floor, and by about 8 p.m. I’d finished.”

Williams linked the bedroom floor to the floor in the hall with a dovetail-shaped section. 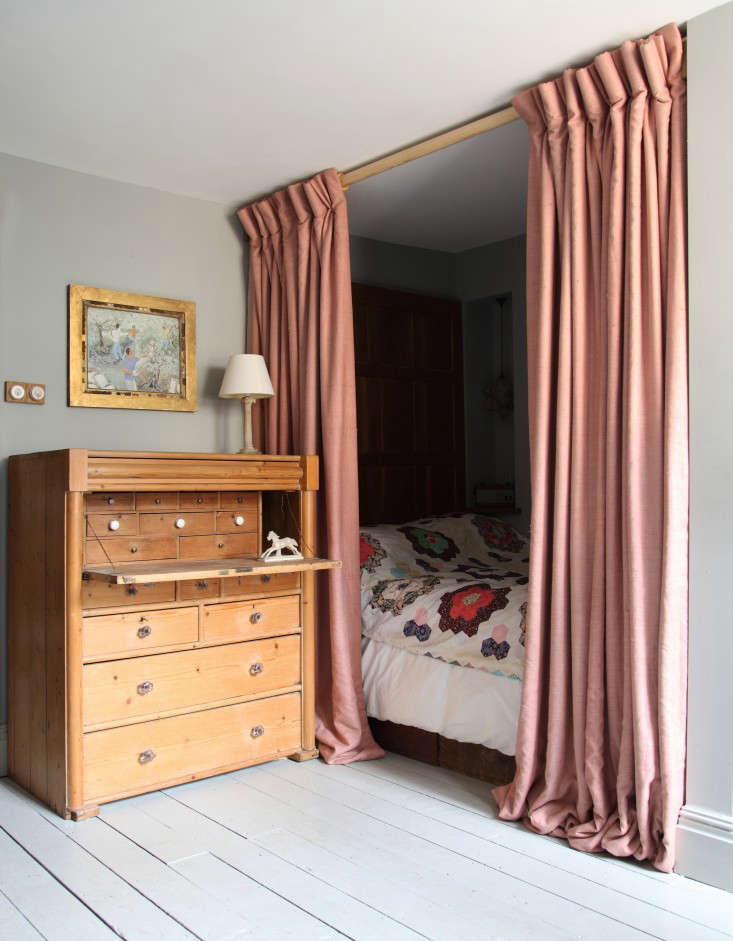 Above: The room has a newly built alcove bed. Curtains are made of dress silk: “The salesman at Peter Jones was horrified when I said I wanted to use it for curtains. He said it would fade in the sunlight–exactly what I wanted it to do!” 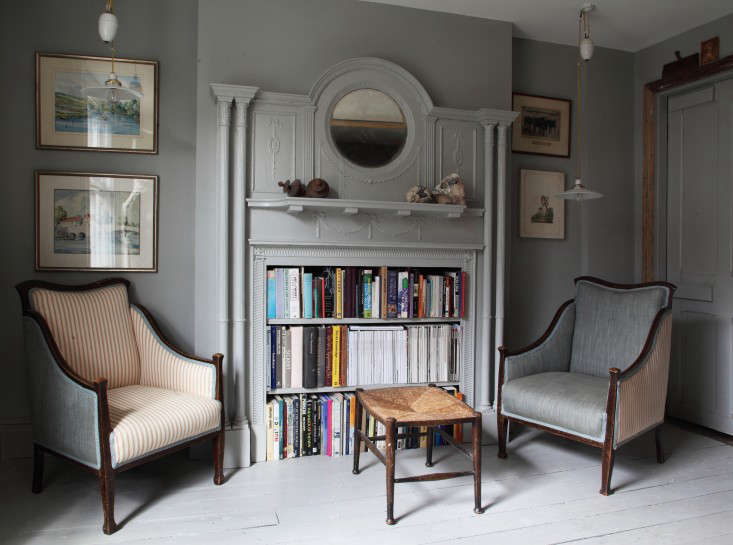 Above: In the bedroom’s sitting area, Williams introduced a salvaged mantel that he uses as a bookshelf. The club chairs are hand-me-downs from his family, and the stool is a Coronation Stool, “commissioned for use during the coronation of Elizabeth II.” The pulley pendants are French Monte et Baisse lights from Williams’ friend’s shop, Un Coin du Passe in Castéra Verduzan, France, “the best brocante in the world.” 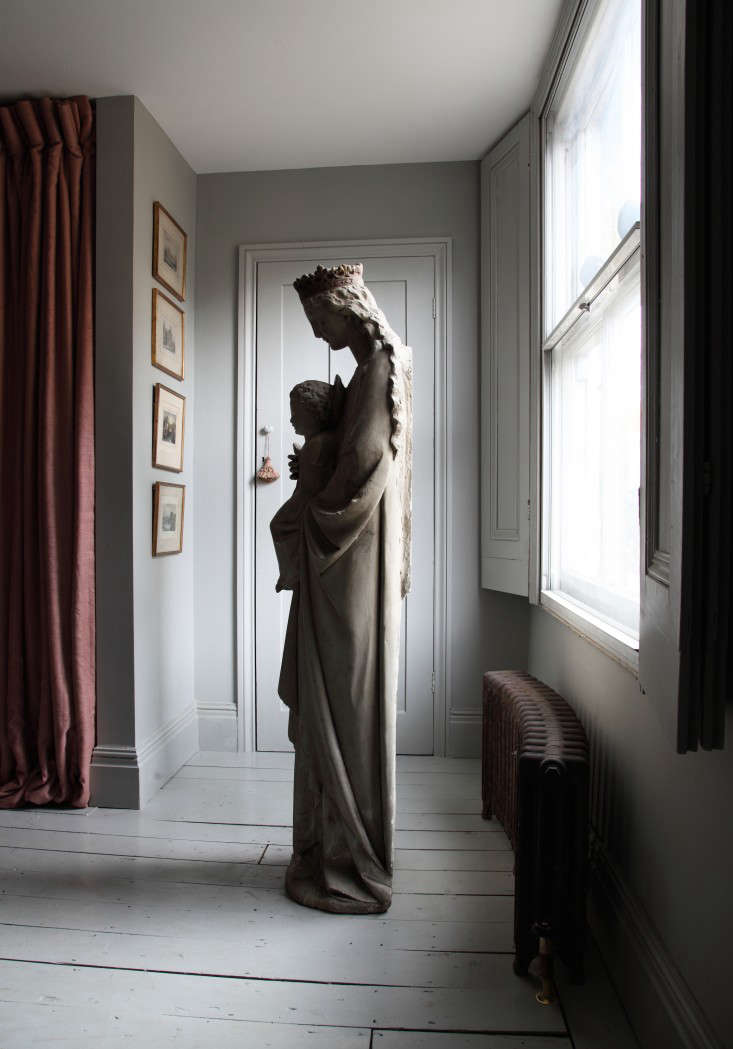 Above: A stone statue from a monastery in Liverpool stands watch in the bedroom. Says Williams, “Many think it’s odd to have a Virgin and child at the foot of one’s bed, including Neri. And my father has made many a joke about my having a virgin in my bedroom every night. But I think she is very beautiful and peaceful, and is therefore essential.”

Stay tuned: Williams and Kamcili also own a B&B in a historic house in Bath that we’ll be visiting at the end of the week. Go to Berdoulat to see more of the firm’s inventive restorations.

Sold on vintage? See a NYC apartment that makes inventive use of antiques in Calm and Collected: At Home with the Duo Behind Aesthetic Movement. And read 11 Money-Saving Remodeling Strategies from Hollywood House Flipper Amanda Pays.

Table of Contents: The British House