“Reuse, restore, recycle” is a familiar mantra, but 25 years back, Amanda Pays was one of the early adapters. An actress turned designer (she’s currently appearing in the TV series The Flash, revisiting a role she first played in 1990), you might not expect frugality to be central to her mission. But thriftiness without sacrifice is Amanda’s longstanding MO: “I grew up in London and the English countryside. My father was a theatrical agent, but he also flipped houses as a hobby. He gave me the appreciation for saving old things and spending sensibly.”

Amanda bought her first house in London when she was 22: “I paid £45,000 and sold it two years later for £185,000. Voila!” Since then, over the course of dozens of remodels for her own family and clients–and in the past 12 months alone, three house flips–she’s figured out how to create made-to-last design without ever breaking the bank. Here are her secrets. 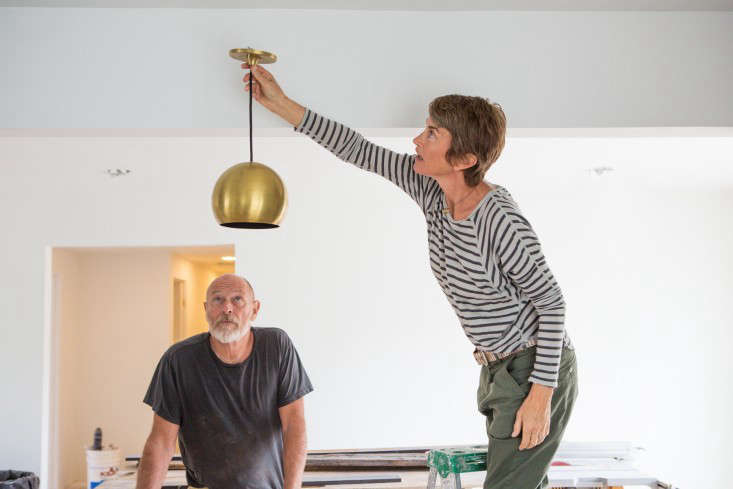 Above: Amanda and her husband (and fellow in-the-trenches house fixer) Corbin Bernsen, in the kitchen of an LA flip house off Mulholland Drive that they overhauled in three months. It sold the first day it went on the market. (Read about how the two collaborate in our Expert Advice post Corbin Bernsen: Star Handyman.) The light is the $195 Isaac 1 Pendant from Schoolhouse Electric. Photograph by Laure Joliet for Remodelista.

1. Buy as much as possible at flea markets.

“Never buy new unless you really have to,” says Amanda. “When I first work on a project, I look for ways to use what’s already there, such as windows and moldings. And when it comes to the furnishings, I start by pulling out things I already own and making new use of them. Then I shop at flea markets and swap meets–I like the monthly Long Beach Antique Market–and Habitat for Humanity ReStores.

Old things, in addition to being better made and more affordable than new, have more to say–they have soul. One item I’m always on the lookout for are old metalwork stools; I use them at kitchen islands, and I never pay more than $15 apiece. I also buy things like soap dishes and wall hooks when I travel. I’m eternally on the hunt. Recently, when I was filming in Vancouver, I returned home with a suitcase full of $4 steel bin pulls from a vintage hardware store called The Source. Our own kitchen has metal handles that we bought at the Rose Bowl: 50 of them for $25.” 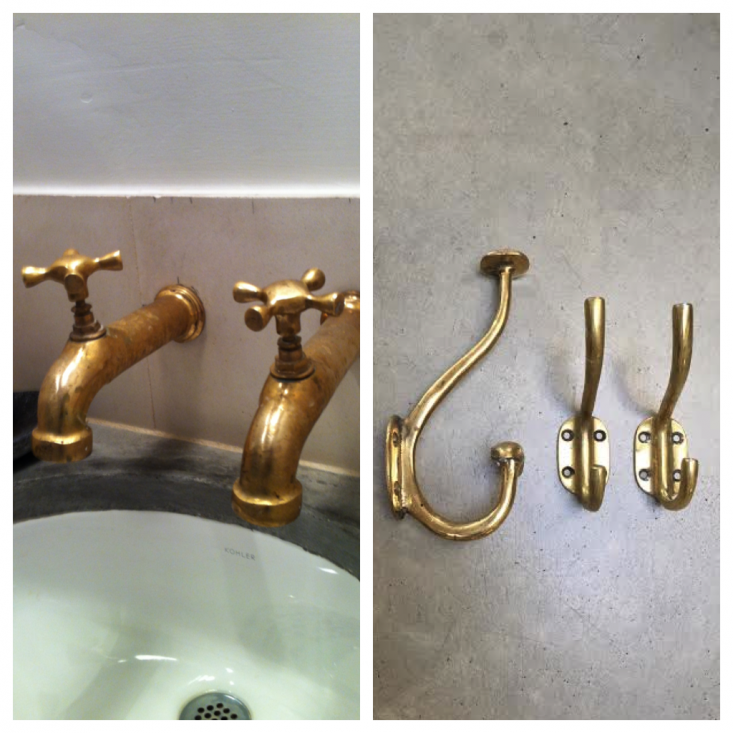 Above L: Amanda found these brass taps at a hardware stall in a Marrakech market. Above R: Antique brass hooks found at the bottom of a bin on a recent day trip from France to La Bisbal, Spain.

“Along with liking antiques, I like the look of old wood. But reclaimed timber has gotten to be expensive and overused. A while back, Corbin and I noticed our builder’s old scaffolding boards–and he was happy to sell them to us for $10 a plank. We made several shelves (and brackets too) from each. They’re all over our house. We even used them as stair treads. Builders, I’ve found, are happy to sell their scaffolding or trade it for new boards.”

Above: The Jenn-Air range (from Sears) in Amanda and Corbin’s own Studio City, California, kitchen is flanked by shelving and brackets built from scaffolding wood. The island was put together from two flea market workman’s benches. “We added a stainless top and a shelf underneath,” she says. “The whole thing cost $200.” For a detailed tour of the space, go to “The California King-Size Kitchen” in the Remodelista book. Photograph by Matthew Williams for Remodelista. 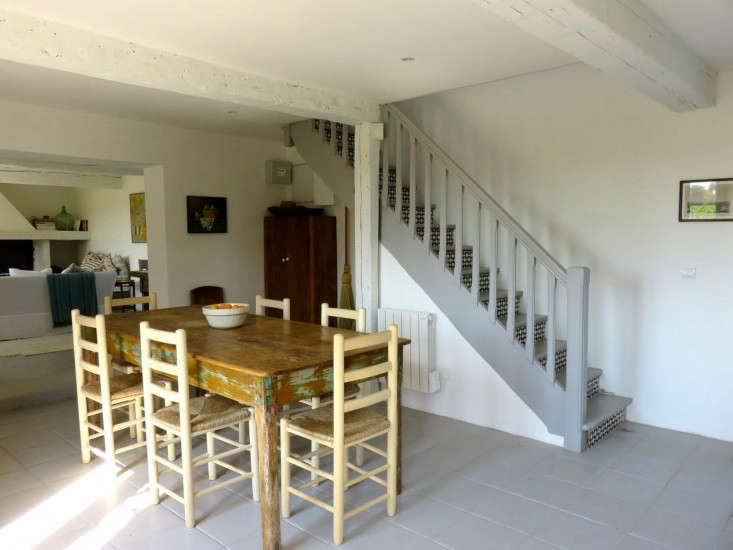 Above: An antique dining table and €30 chairs (found in a wicker store in Las Bisbal, Spain) at Amanda and Corbin’s family house in the Languedoc region of France, near where her mother and two sisters live. Amanda and Corbin have been slowly and cost-consciously renovating indoors and out for the last four years. Photograph by Camilla More.

3. Use drop cloths for curtains and slipcovers.

“I have a default for window treatments: I always make Roman shades from cotton canvas drop cloths that I get at Koontz Hardware. I like the ones that aren’t too yellow, but I’m not picky. The shades are incredibly simple–you can get them stitched at a dry cleaner that offers sewing. I also use drop cloths for slipcovers.”

4. Use pipes as curtain rods and towel rails.

“I never go looking for rods–whether for curtains or towels or closets or handrails. I like the look of plumbing pipe, and I cap it off with standard cast-iron pipe flanges.” 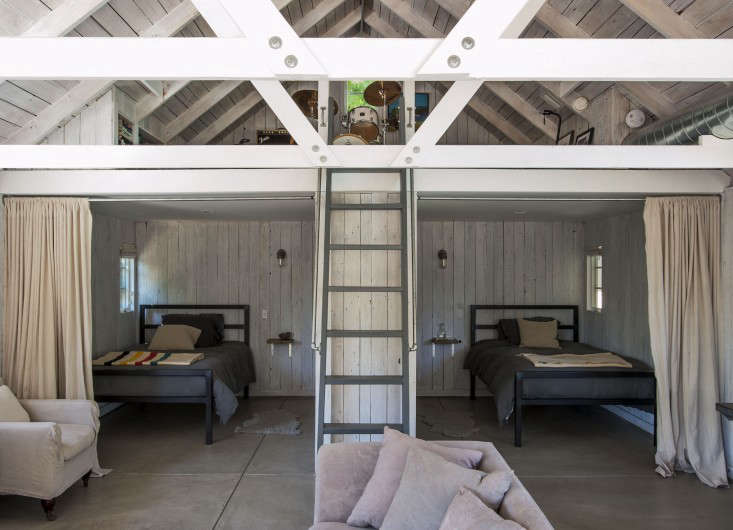 Above: Amanda turned a shed into a bunkhouse for her four sons. It has drop-cloth curtains, shades, and slipcovers. Take a tour in Backyard Bunkhouse, Hollywood Royal Family Edition. Photograph by Matthew Williams for Remodelista. 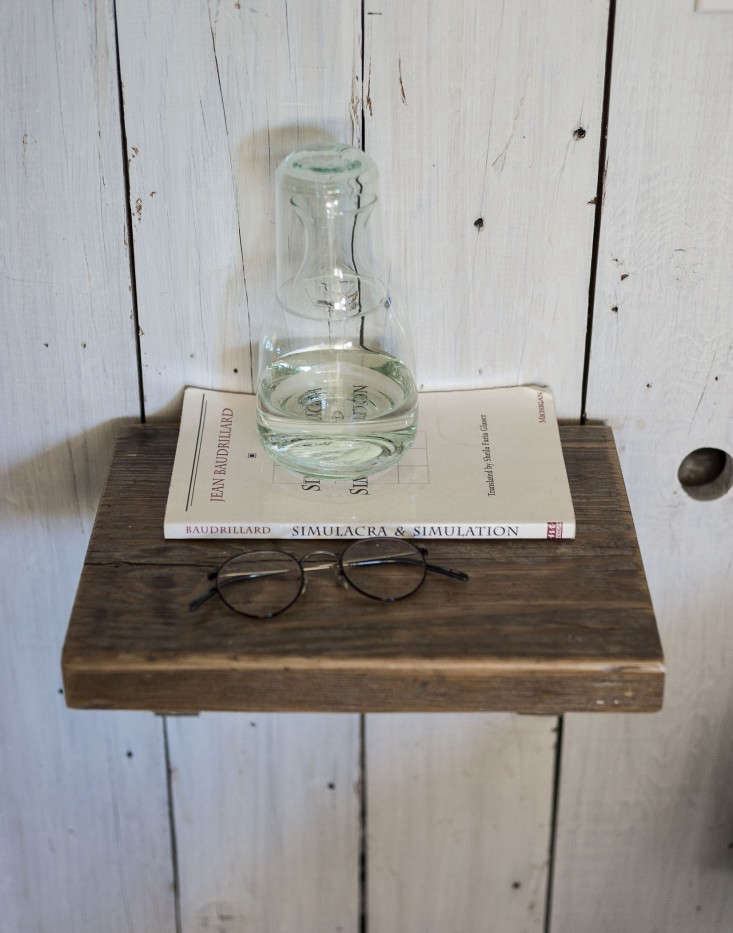 Above: Corbin made this bedside shelf from scaffolding wood. 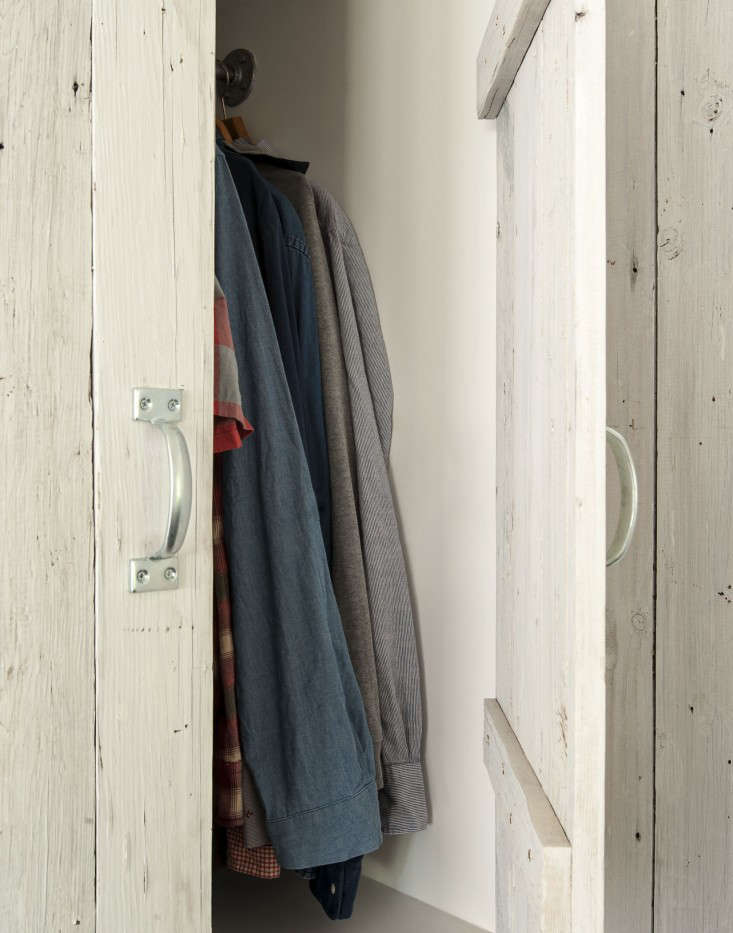 Above: The bunkhouse closets have pipe railings and hardware-store handles.

5. Find appliance bargains by buying on sale and in bulk.

“I don’t buy fancy appliances, but I do buy reliable, good-looking ones. For a long time, I went to Sears and got great deals by purchasing a lot of pieces at once and getting bulk discounts–sometimes as much as 30 percent off. Lately, I’ve been going to Costco and Home Depot–I watch online for sales and strike then.

For flip houses, I generally stick to a $5,000 budget for range, hood, fridge, and dishwasher. It breaks down as $1,500 for the range (I just bought two Ancona Gourmet Series 36-Inch Ranges at Costco), $600 for the hood (I buy the interior and then build it out), $2,000 for the fridge (I like the industrial handle on this Stainless Steel Maytag French Door Refrigerator from Home Depot), and $800 for the dishwasher (such as this Maytag from Home Depot).”

I don’t put washing machines and dryers in my flip houses, but at home I spend a bit more on them because I have a big family, so our machines have to be workhorses. Ours are Kenmore Elite from Sears. Another source that I use to buy appliances as well as bathroom fixtures is Build.com–it carries everything and my builder has an account that gets us a 10 to 20 percent discount.”

Above: Amanda and Corbin’s laundry room has a Kenmore washing machine and dryer (both now discontinued models) from Sears. Learn all about the detailing in Rehab Diary: Amanda Pays and Corbin Bernsen Air Their Dirty Laundry. Photograph by Matthew Williams for Remodelista.

“Koontz Hardware is my go-to spot for so many things: I find wall-mounted laundry faucets (great for kitchen and bathroom sinks), $99 chrome gooseneck faucets, old-fashioned galvanized steel garbage cans (for storing things like dog food), and, of course, piping, paint, and drop cloths.” 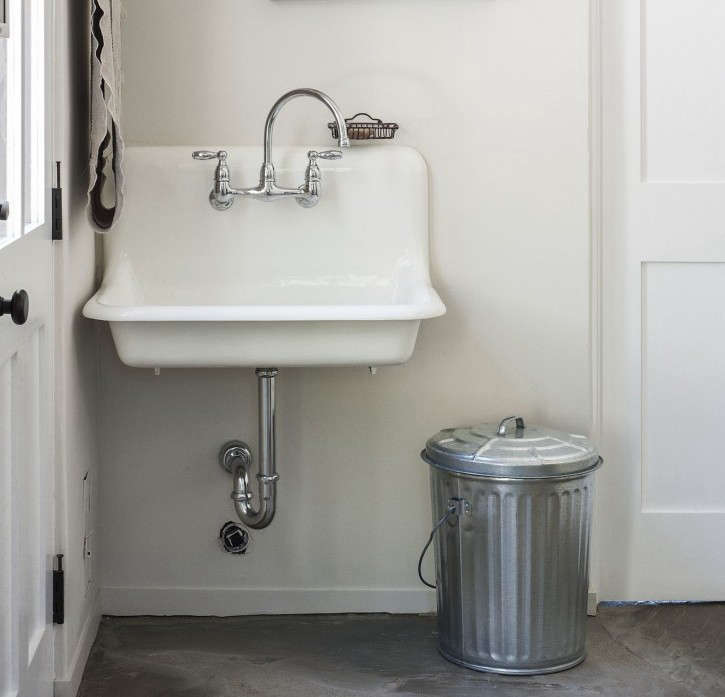 Above: The laundry room sink, a refinished vintage design, came from Square Deal Plumbing Supplies in LA. It has a faucet from Koontz Hardware. Photograph by Matthew Williams for Remodelista. 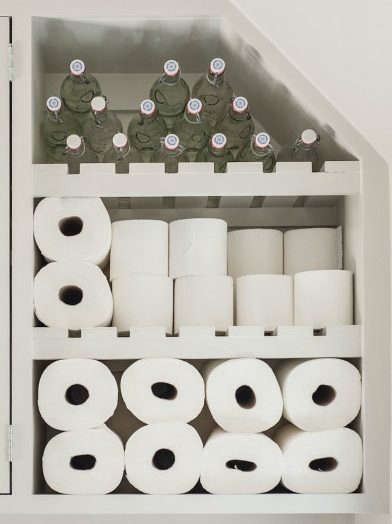 Above: The room’s ample storage includes ventilated shelves modeled after old British laundries and inexpensively made from narrow Douglas fir boards by Amanda’s builder. Photograph by Matthew Williams for Remodelista.

7. Take a high/low approach to lighting.

“I use lighting of all sorts, old and new. I like simple porcelain sconces from the hardware store and also often use Ikea’s basic lighting (ceramic designs that don’t have a lot of small parts). But I mix these with statement-making pieces: a splashy antique chandelier, a brass globe light. My favorite source is a place in North Hollywood called Practical Props, which sells restored vintage, reproduction, and new lighting–in 2013, it was voted the best lighting store in LA by Los Angeles magazine. 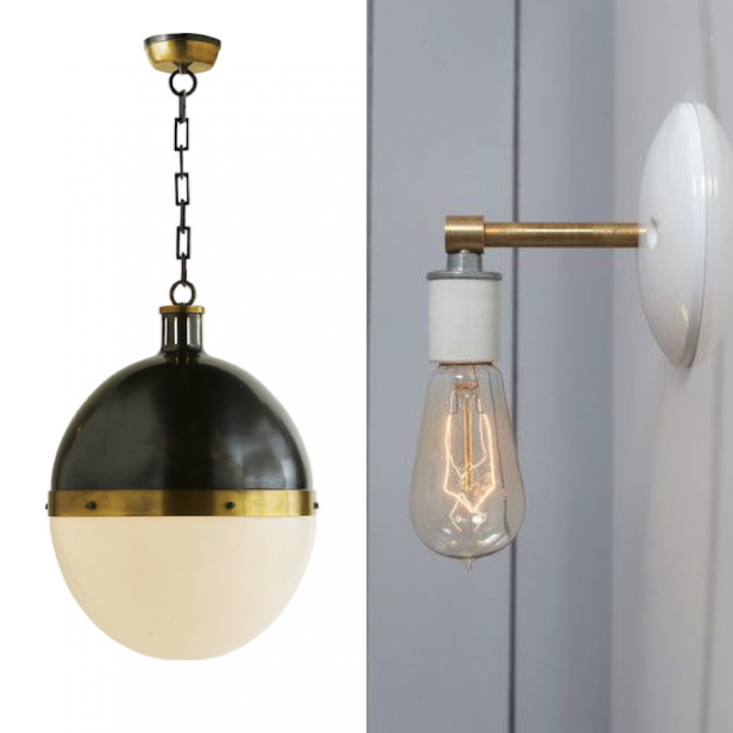 “I love using natural stone, and I buy it affordably by shopping the way French chefs do–before planning anything, I see what’s available. I go to stone yards and fabricators in the San Fernando Valley and look for marble, soapstone, and quartz remnants and returns. I find pieces of Carrara left over from a kitchen island that cost $80 and are big enough for a bathroom sink counter. In kitchens, I often balance stone, such as on an island, with counters made of Caesarstone–it’s well priced, durable, and comes in a huge color palette.”

“I love placing outdoor things, like garden sinks and stone pavers, inside–they’re priced lower than indoor materials and beyond rugged. Plus they add a surprise element.” 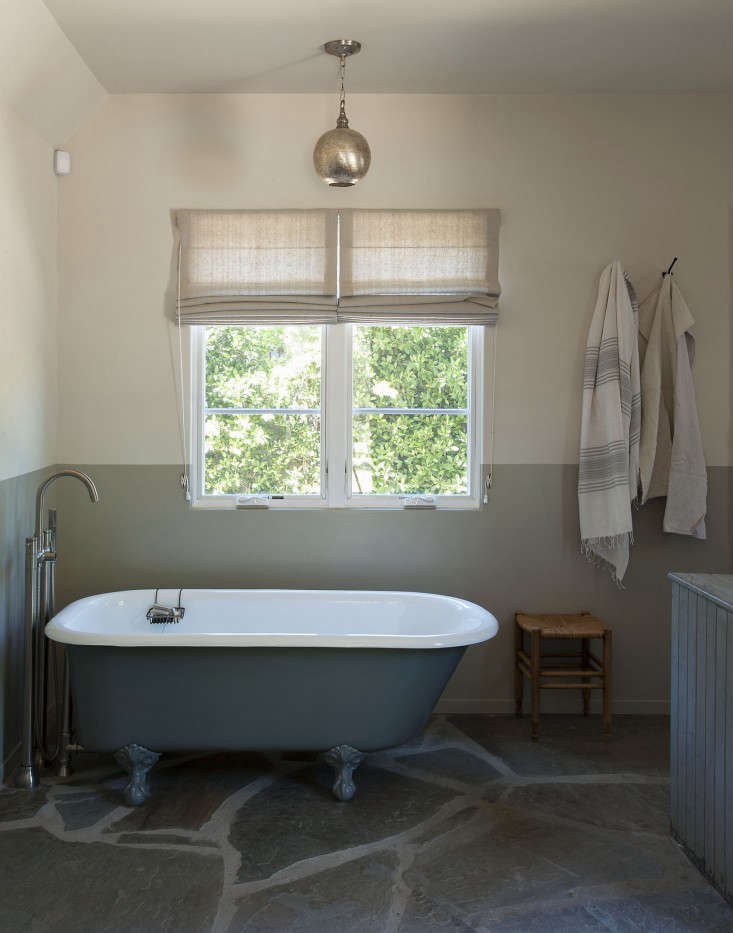 Above: Amanda and Corbin’s own master bath has a floor paved in Pennsylvania irregular blue flagstones (from Prime Masonry Materials), a vintage tub, and drop cloth Roman window shades. Photograph by Matthew Williams for Remodelista.

Above: Amanda turned a paneled wood box from a swap meet (see previous photo) into a his-and-hers laundry hamper in the master bath. Photograph by Matthew Williams for Remodelista.

“Paint is well-known as the cheapest and quickest way to make over a room. It has the same impact as tile but is so much more affordable; and if you use semigloss or gloss, it’s washable. All the elements in your remodel–floors, walls, countertops, hardware, lighting–have to come together. Once they do, I go in at the end of every project and add paint statements: a borderline in a quiet room, a color around a window frame, a band of paint instead of a tiled backsplash, a stripe on the bottom of the front door–a bit of wow.” 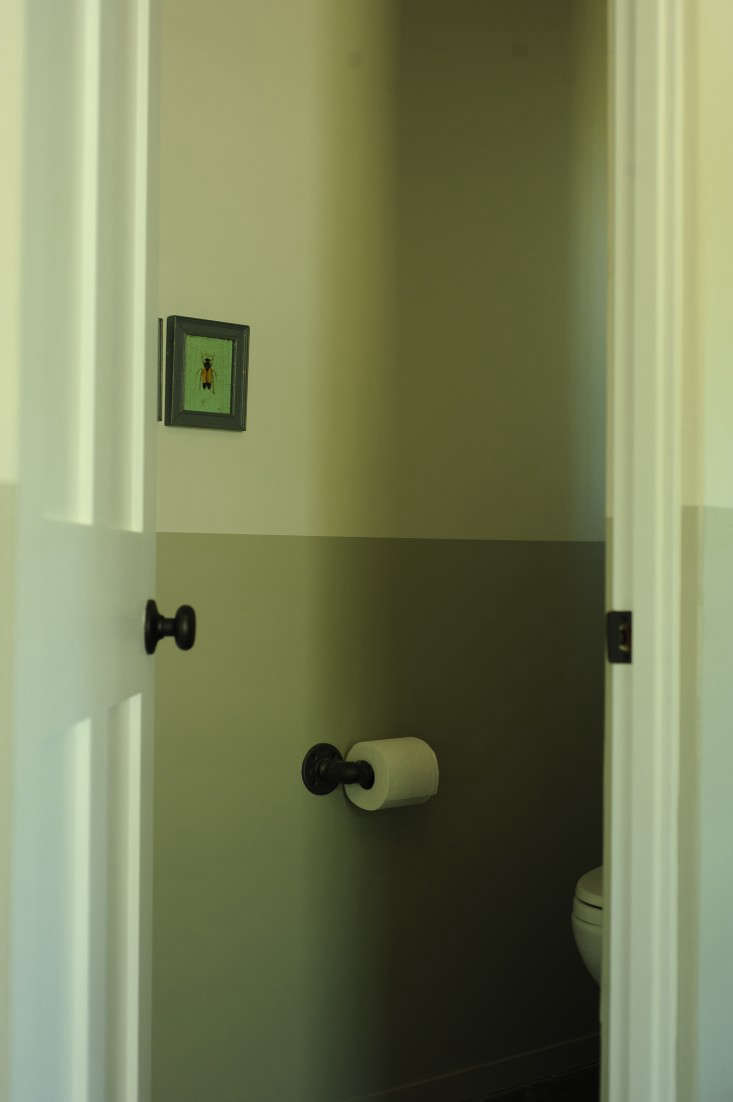 Above: The two-toned WC is one of Amanda’s signatures. Photograph by Matthew Williams for Remodelista. 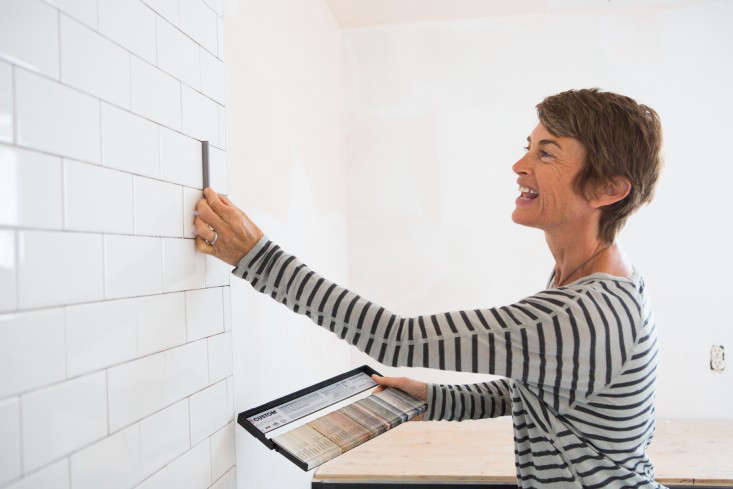 Above: Picking out a grout shade for a flip house bathroom. “I never spend more than $2 to $5 a square foot for tile,” says Amanda. “And I love pairing basics, such as subway tile, with different colored grouts to make it more dynamic.” Photograph by Laure Joliet for Remodelista. 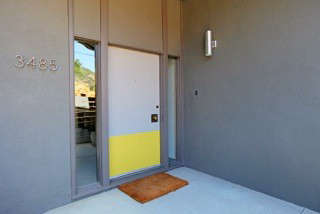 Above: A yellow-painted punctuation point on Amanda’s flip house off Mulholland Drive.

“When you’re filling in the details for your remodel, you fall in love daily with unexpected things you suddenly think you can’t live without. But if you only have so much to spend–or are already deep in borrowed money–it’s important to set a budget and stick to it. Pin your pricey find, or a take a picture, then walk away–and keep looking. I guarantee you’ll turn up something within your range that excites you just as much. Remodeling is a treasure hunt.” 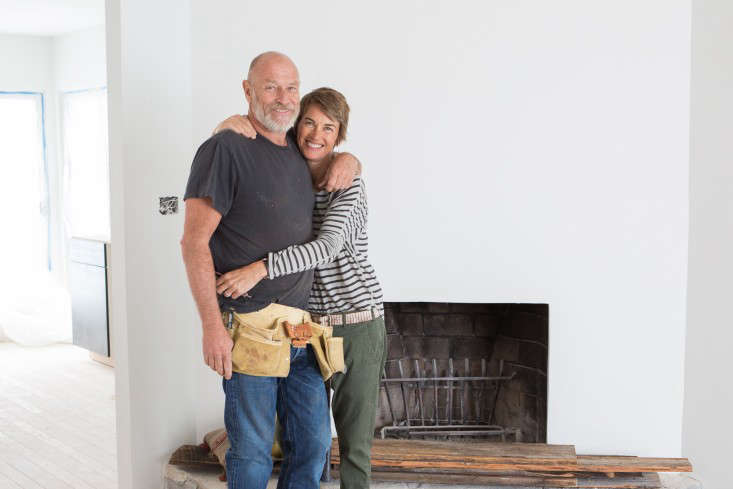 Above: After overhauling a house, many couples vow, “Never again,” but Amanda and Corbin say, “What’s next?” Photograph by Laure Joliet for Remodelista.

See more of Amanda’s work at Amanda Pays Design, and take a look at our posts:

Trending on Gardenista: Luck of the Irish

A Madcap Apartment in Paris for a Creative Couple (Plus Kids)

10 Favorites: The Allure of the Modern Interior Archway