We first spotted Lauren Snyder and Keith Burns’ white-tiled kitchen in a house tour on Refinery 29 and were immediately drawn in. We saw it again in indie book Faculty Department, admired the Knife Rack, and had to take a closer look.

Tucked into their Fort Greene, Brooklyn, home, the kitchen is a complete remodel that the couple designed and managed themselves. Burns is an architect with his own solo practice, and Snyder, who studied interior design, has developed her own design cred through her Brooklyn store and online shop, The Primary Essentials, which stocks well-edited staples for home and pantry from Clam Lab, Fort Standard, and Wary Meyers, among others.

Snyder and Burns cook at home often and like to entertain. They lived with the existing kitchen for some time before customizing it to their needs. And, like everyone, they had to prioritize their desires against their budget. “Our old kitchen was charming but wasn’t our style,” says Snyder. “We had been in the apartment for a while, so a change felt really good.”

Photography via Refinery 29 and Faculty Department, except where noted. 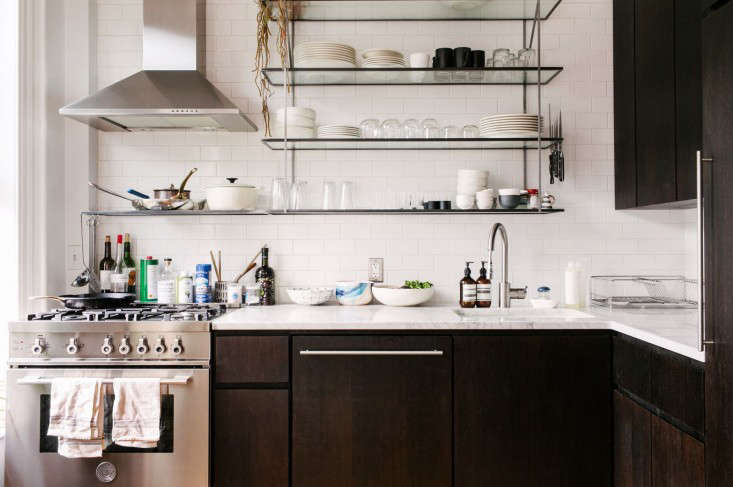 Above: Snyder wanted the kitchen to feel as open and light as possible, and to have open shelving. She chose ebonized walnut facing on custom cabinets; the refrigerator is hidden behind the cabinet at the farthest right. She and Burns oversaw the project themselves, but hired someone to do the demolition, electrical work, and custom fabrication. 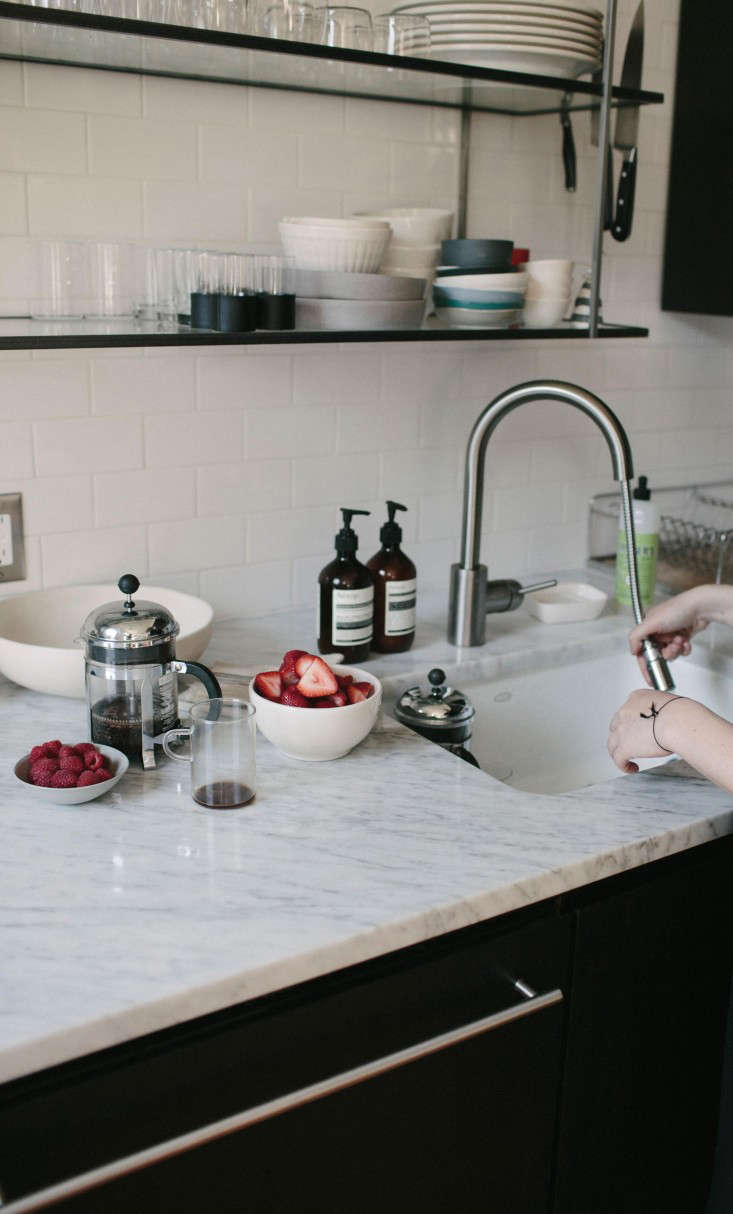 Above: Burns wanted extra counter space, so the pair chose 30-inch-deep counters over the usual 24 inches. Snyder reports: “It’s been amazing.” The extra depth allows for an additional six inches of counter space behind the stove, allowing room to store tools and ingredients. The countertops are Carrara marble and the faucet is from Grohe; for details, see Remodeling 101: Marble Countertops and High/Low: The Dornbracht vs. Grohe Faucet.

As for budget, Snyder suggests the most common problem is that people are unrealistic from the start about what they want and what it costs to get it. She says it’s critical “to understand all the items that are going into your renovation, and if you’re new at this, ask a friend or someone who can help you.” Then get estimates for everything, prioritize your spends, and have a reserve fund for the oh-shit moments that occur in any renovation. 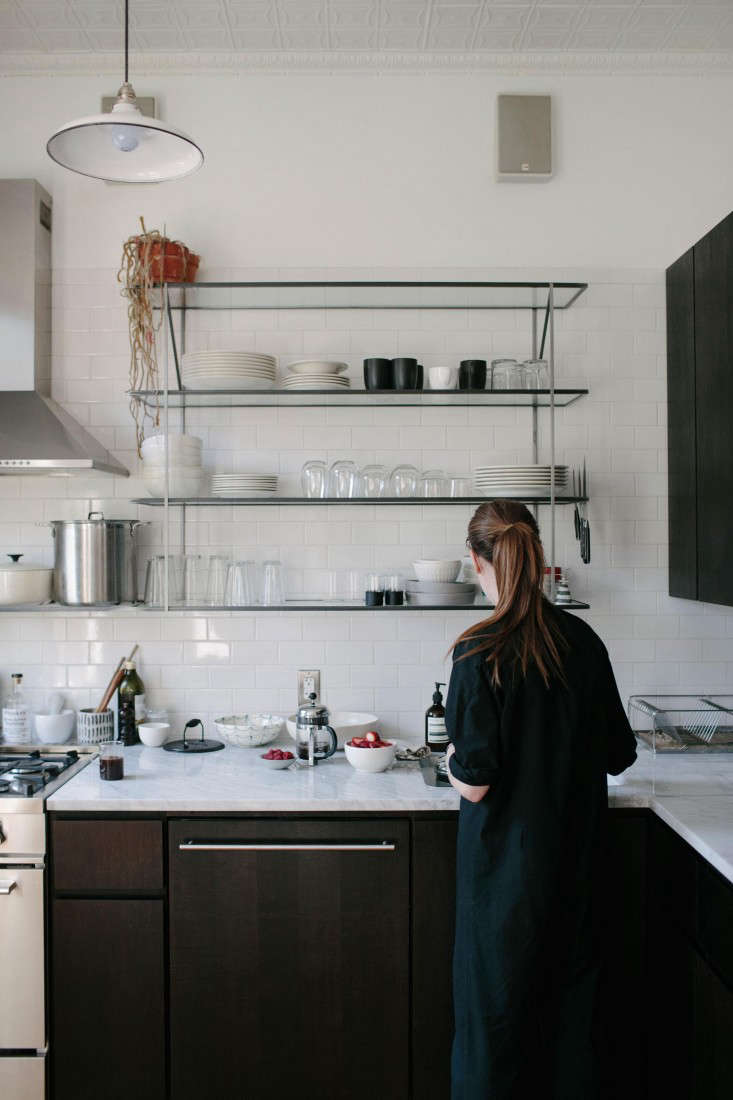 Above: Snyder chose white subway tile with white grout for the back wall, and has no regrets: “Even the backsplash really doesn’t get very dirty–we’ve had no issues keeping it clean.” The cabinet with the wide rail handle hides the dishwasher. The pendant light is from the Brimfield flea market. 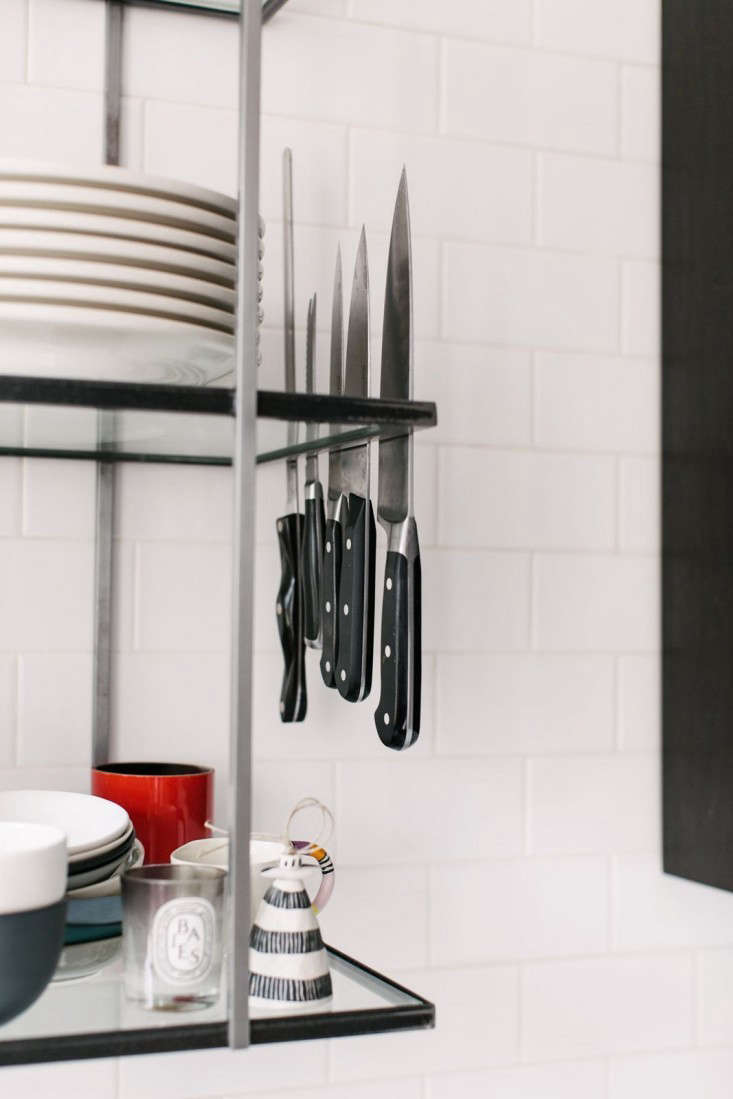 Above: Snyder’s genius knife storage solution is a magnetic strip–priced at around $10–wrapped around the edges of the glass shelving. 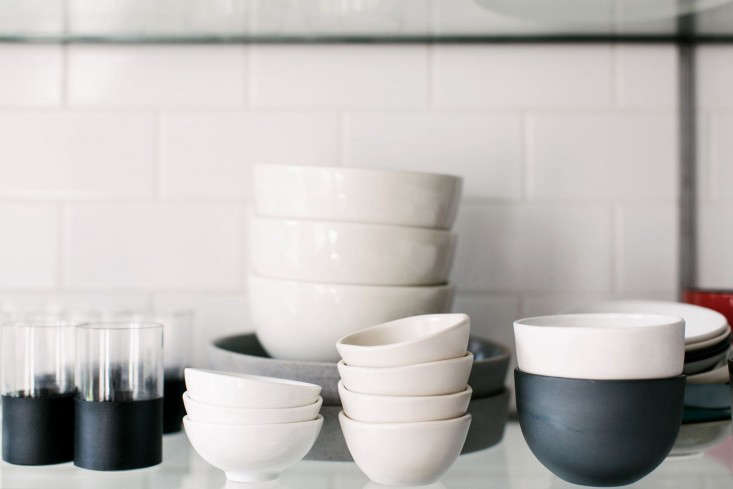 Above: Snyder’s tabletop collection includes pieces from Humble Ceramics. The leather-wrapped glasses on the left are vintage. For similarly simple ceramics, browse Tabletop at The Primary Essentials. 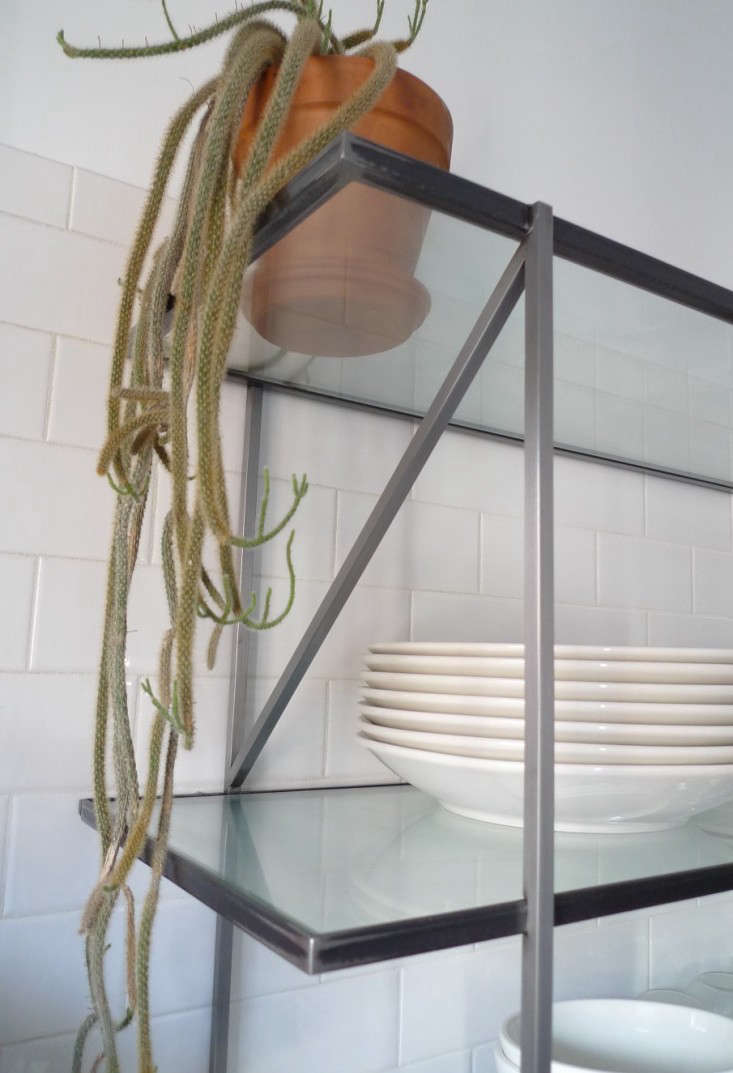 Above: The steel-and-glass shelving unit was fabricated by good friend Ben Duarte. (The shaggy cactus on the top shelf is now gone and the shelf holds Snyder’s ceramics collection.) Photograph via Ben Duarte Build/Design.

“In any good renovation, there are things that are worth splurging on and things that are not,” says Snyder. Put money into a few key items, such as the counters, she says, and leave the rest standard. The splurges “will shine through.” 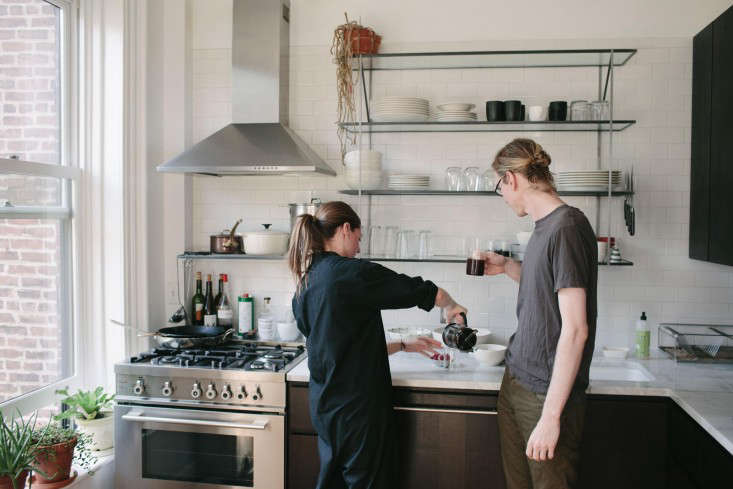 Above: The pair chose a Bertazzoni range and a hood from XO Ventilation–they found a good deal on the hood, and felt the Bertazzoni was “a really well-designed range at a medium price point.” On the storage shelf above the stove is an oft-used Dutch oven from Le Creuset.

See the Bertazzoni and others in 7 High-Style Kitchen Ranges and 10 Easy Pieces: Freestanding 36-Inch Ranges. And if you’re in the market for a new range, read Decoding BTUs: How Much Cooking Power Do You Really Need? 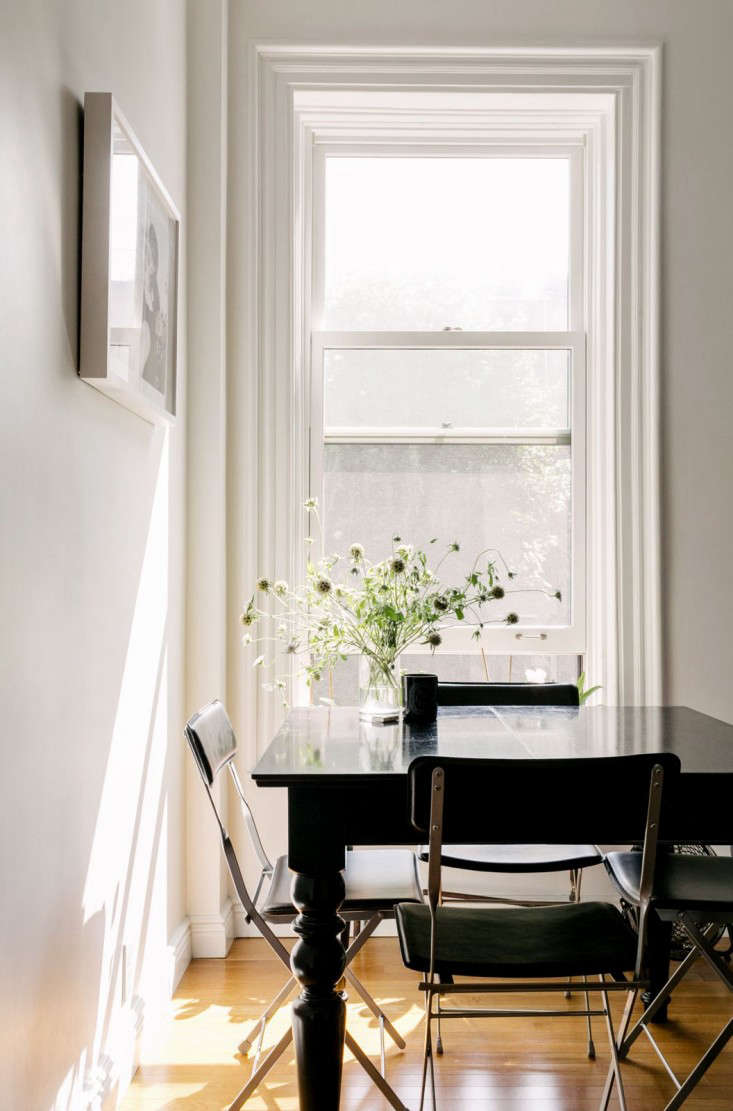 Above: The couple’s dining table sits opposite the new open kitchen.

The World Is His Oyster: Saltwater in Inverness, CA