Aquatic farmer and champion of native oyster restoration Luc Chamberland opened his own restaurant on Tomales Bay, north of San Francisco–and not far from the boathouse featured in today’s wedding spotlight–to rave reviews.

With the exception of Manka’s Inverness Lodge, which lost its restaurant after a fire in 2006, the quiet town of Inverness has long lacked a decent place to dine (ironic given that this is sustainable, farming-friendly West Marin). Much to the delight of locals, Luc Chamberland (who began at Manka’s) fulfilled a 20-year dream with the opening of Saltwater Oyster Depot in 2012. To launch his business, he independently crowd sourced the requisite $50,000 for operating costs. The result? An airy, light-filled restaurant offering local oysters, fish, and a seasonally changing menu with accessibly priced beer and wine on tap. In short, a great new Inverness hangout for locals and tourists alike. 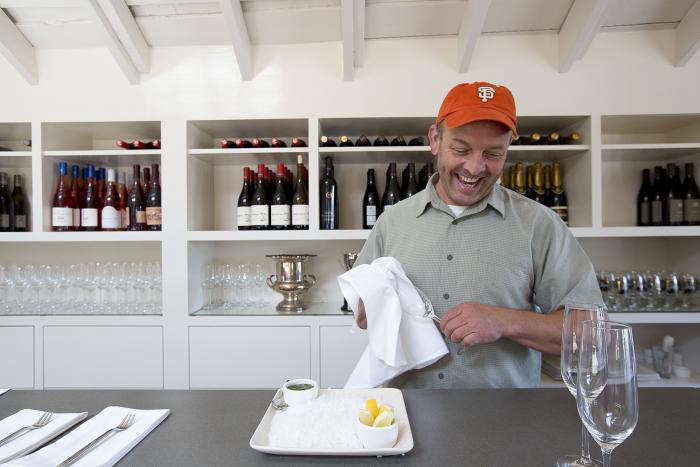 Above: Luc Chamberland behind the bar. Having opened with money raised from the community, he’s a big believer in giving back and hosts Closed on Mondays, turning the place over for events that benefit local groups and feature special dinners. In another community-driven gesture, the restaurant also doubles as a wine store of sorts with wine available for retail.

Above L: Chamberland shucks a freshly sourced oyster. He encourages local fisherman to bring their catch straight to the kitchen door. Above R: The oysters are plated on sea salt granules resembling ice, a more sustainable way to serve them. 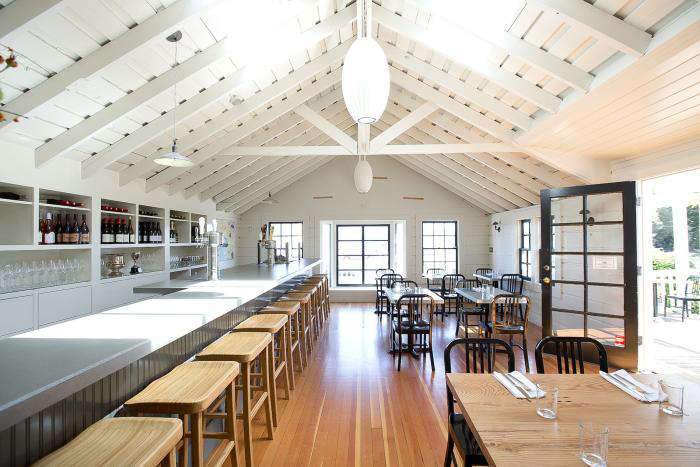 Above: Saltwater’s pastry chef Stacy Lauer oversaw the restaurant design. The space was formerly a pizza restaurant; Lauer took out the beams to open up the room and reveal the skylights, and added a wall of built-in shelving for storage and wine display. The raw, simple beveled-edge countertop is by Concreteworks in Oakland, with beadboard paneling beneath. 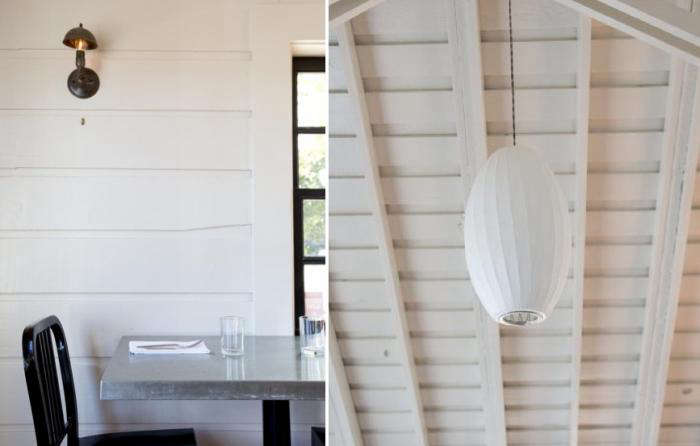 Above L: The zinc-covered plywood tables were made by Eclipse Design in Petaluma. Above R: The Nelson Cigar Lamps are from Y Lighting. 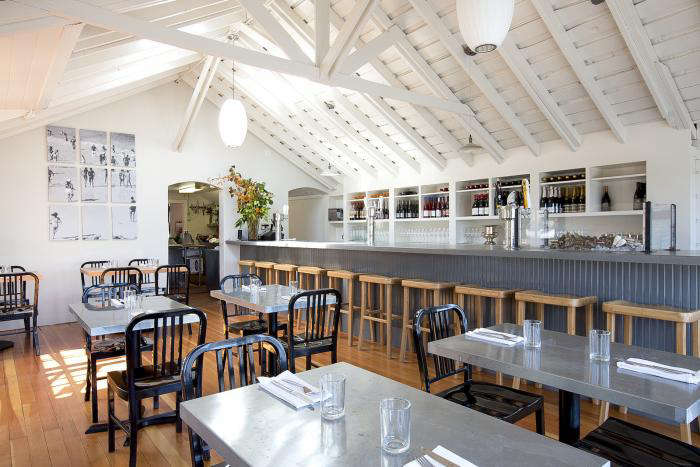 Above: Lauer sourced the Black Metal Chairs from Overstock; $129 for two. 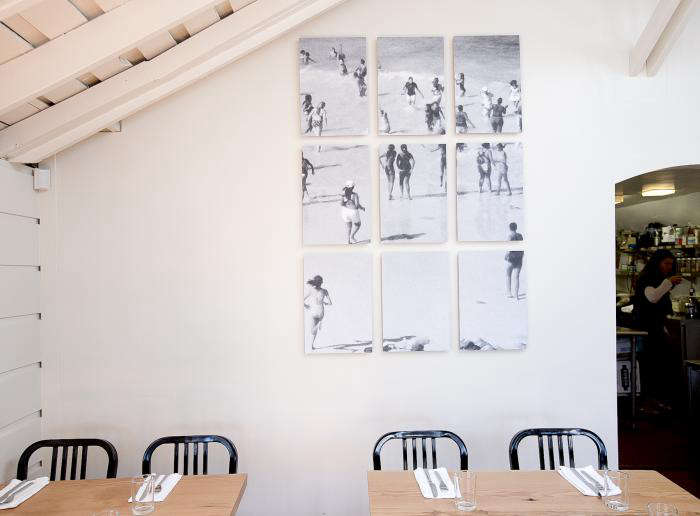 Above: Fir wood tables are mixed with zinc-topped tables. On the wall is an installation by local photographer Gwendolyn Meyer. 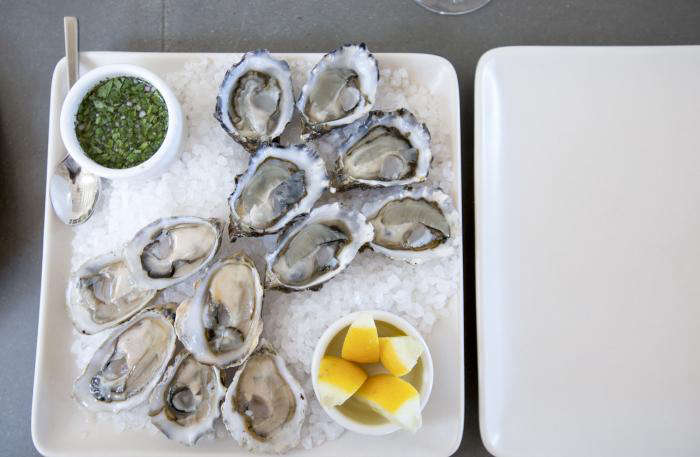 Above: Fresh oysters on the shell with a mignonette sauce. Chamberland also likes to serve them with freshly grated horseradish. 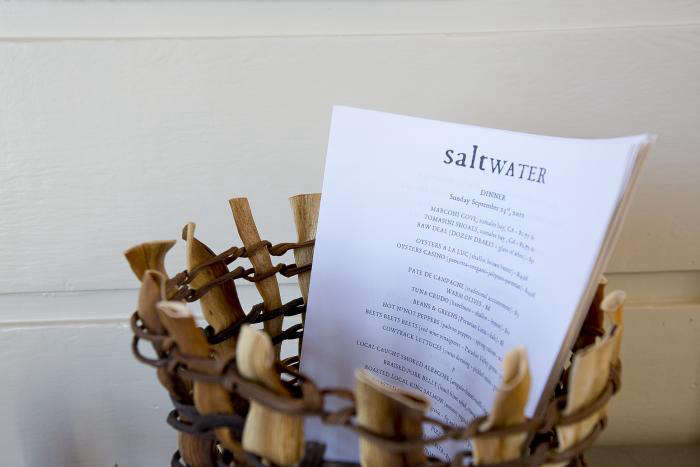 Above: Menus sit in a basket made from seaweed, a gift from a local. 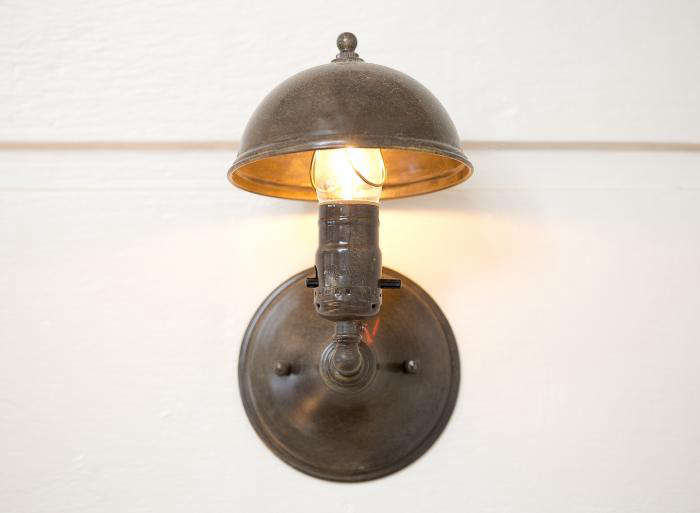 Above: The wall sconces are from Ohmega Salvage in Berkeley. 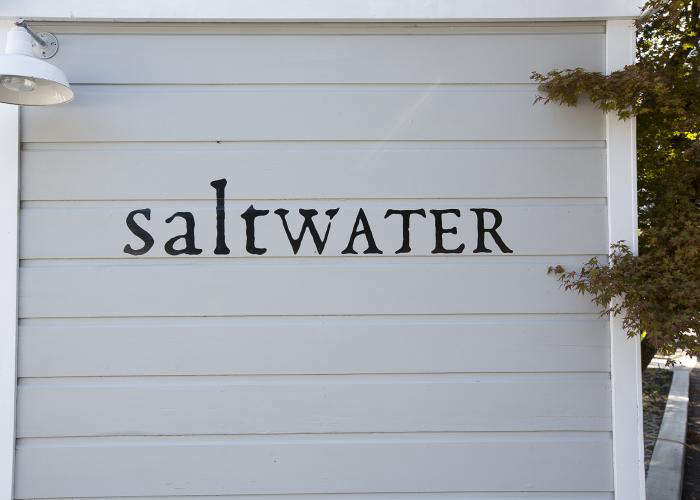 Above: The community-minded Chamberland is also involved with Pickleweed Point Community Shellfish Farm, dedicated to maintaining the safety and quality of the waters that support oysters. For more, go to Saltwater.

Heading to Northern California? Check out our Guide to the Bay Area, including the Oldest Bar in SF. On Gardenista, have a look at Floral Designer Lila B.’s Shop at the Stable Cafe in the Mission District.

N.B.: This post in an update; the original story ran on October 16, 2012 as part of our West Marin and Beyond issue.

Kitchen of the Week: A Young Couple's Brooklyn Kitchen Reinvented