In 2014, Peter Cohen and Marty Lieberman ventured East from Seattle in search of a Cape Cod retreat. They never made it past Salem. During what was supposed to be a brief stop in Peter’s hometown, the couple discovered a 200-year-old, Federal-style brick mansion, located in one of Salem’s most historic districts. Unsullied, except for a couple of midcentury mod cons, the house had a lot of potential. It also needed a lot of work.

Peter, who had designed the couples’ previous residences as well as several investment properties, took the helm of what would turn out to be a 14-month renovation project. His goal, or challenge, was to seamlessly marry the couple’s modern sensibilities with the home’s historic character. “Overall, our intention was to honor and respect the bones of the house,” he says. “There were lots of old scars or little things that told the story of the building, and we were careful to preserve those nuances throughout.” At the same time, Peter sought to bring the house into the modern age, creating a space that would showcase their collection of contemporary art. “We love the intersection of antique and modern, and that was the driving aesthetic sensibility.”

For Peter, this endeavor not only involved a shift in locale, but also a career change. A former advertising director, he recently launched PB+C, an interior and architectural design firm. Join us for a tour of his Salem tour de force.

Photography by Justine Hand for Remodelista. 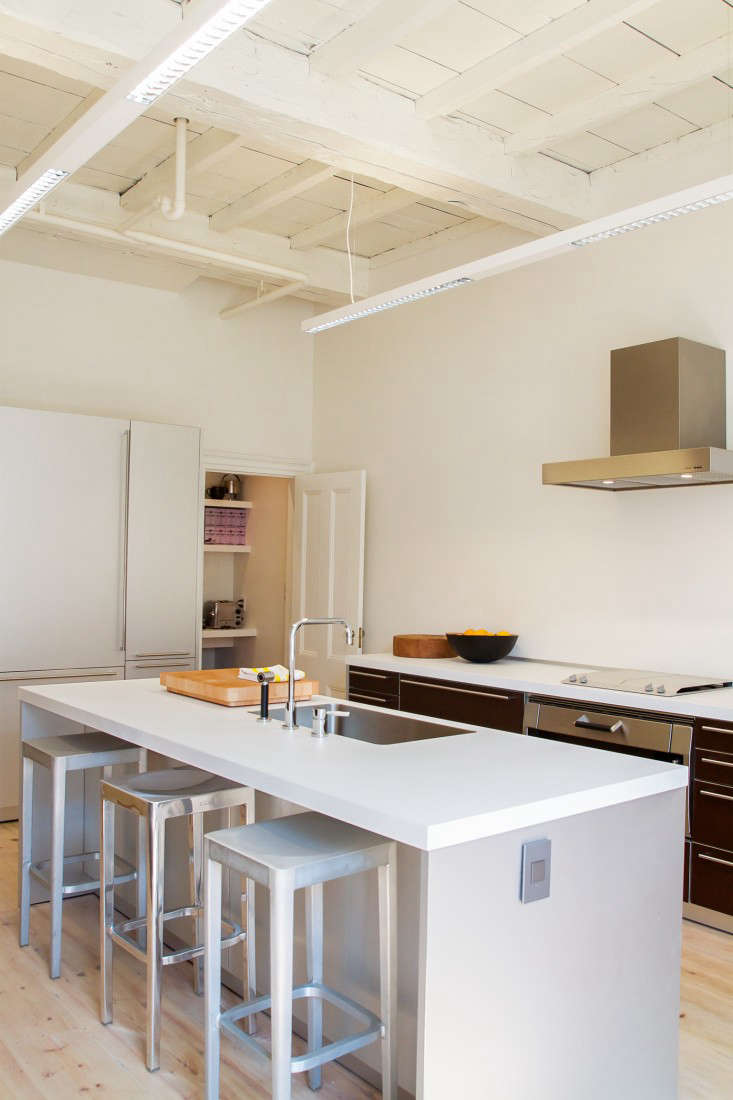 Above: Step one was to strip the house to its bare bones. “Copious amounts of wallpaper in varying stages of decay were removed,” he says. This process revealed some pleasant surprises, not the least of which were the impressive beams in the kitchen, heretofore hidden under a drop ceiling. For Peter, there was no question that these lofty timbers, possibly salvaged from an old schooner, would become an integral part of the kitchen design. Not only did they pay homage to the building’s history, they also provided a rustic counterpoint to its otherwise grandiose detailing of the home. Painting the beams the same white (America’s Cup from C2) as the rest of the house served to integrate them into the overall design scheme while at the same time emphasizing the room’s soaring height. 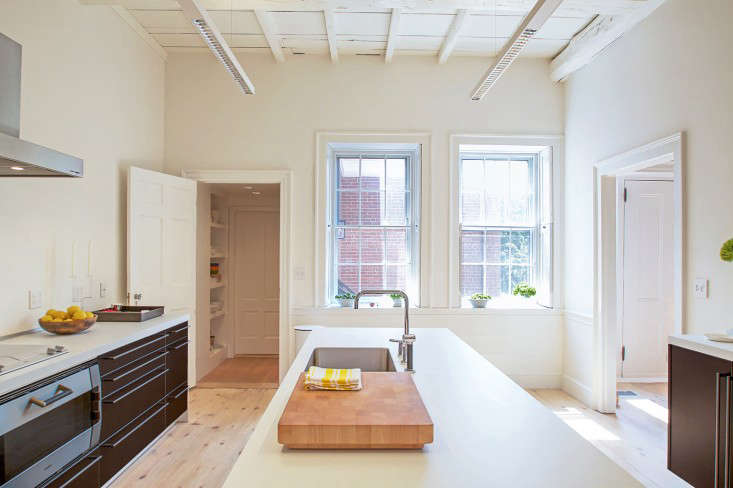 Above: For kitchen storage, Peter retrofitted some lightly used Bulthaup cabinets, which he garnered from a friend. Their dark facades help anchor the room without competing with the architecture. As a result of seeing “one too many strip-mining operations,” Peter and Marty opted for custom laminate countertops. The laminate has the warmth, weight, and texture of natural stone, but is less hard on the environment. Placed lengthwise, the kitchen counters, as well as the minimal lighting from Artemide, accentuate the dramatic lines of the room. 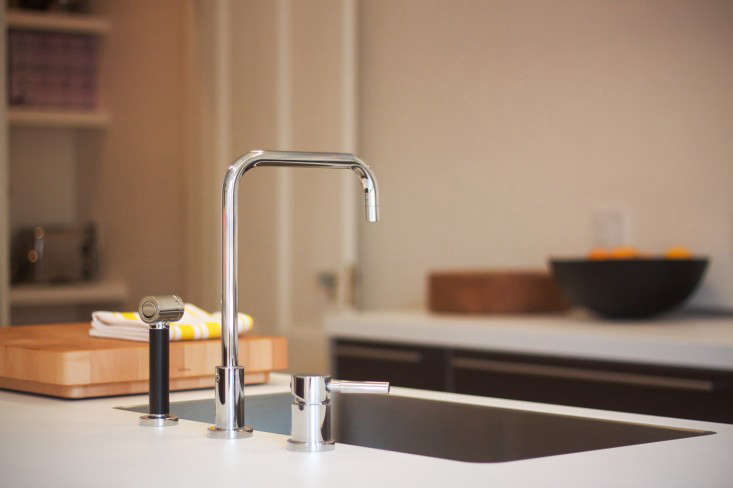 Above: More seamless lines: a Dornbracht Meta.02 Faucet presides over an integrated sink. 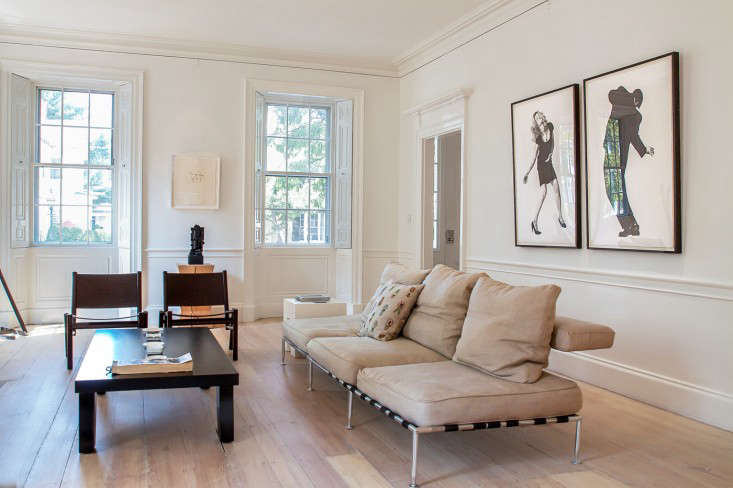 Above: A longtime art collector and burgeoning sculptor himself, Peter wanted the house to have a “gallery-like feel.” The warm white walls (also America’s Cup) not only showcases the art (in this case two portraits by Robert Longo) but also emphasizes the classic architecture of the house. 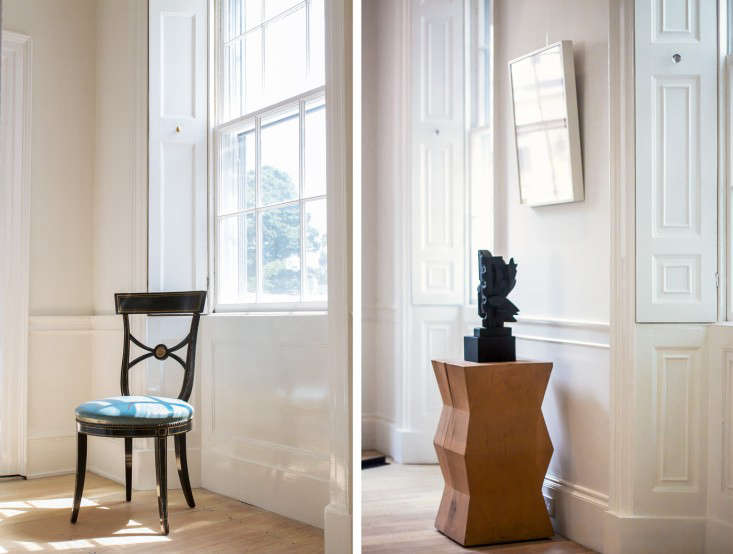 Above: Complete with recessed shutters, the home’s 44 double-hung windows are one of its most outstanding features. Peter was painstaking in his restoration of these masterpieces, reglazing more than a thousand panes of glass. 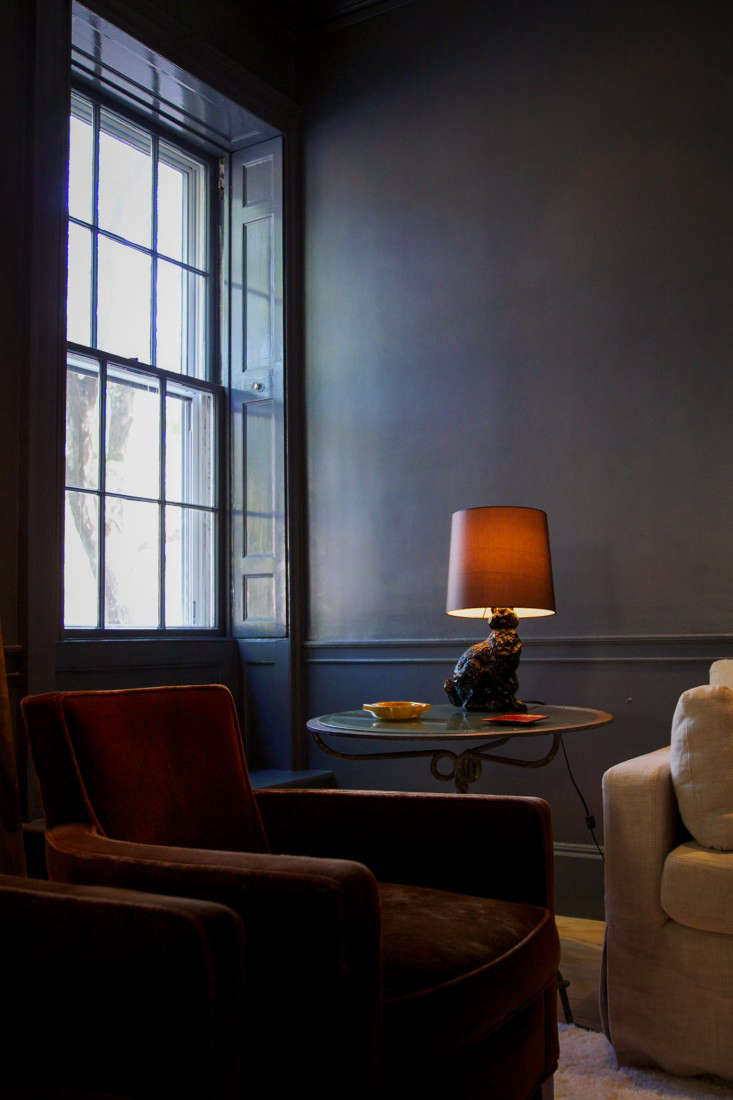 Above: The only room in the house that is painted a color is the library or media room. Here Peter used Anchor Gray (a Benjamin Moore color he had mixed by Fine Paints of Europe) paired with amber accents and warm textures. In what many designers might consider a radical departure, Peter choose a high gloss paint for the walls to further emphasize the texture of the millwork and the carefully preserved horsehair plaster. On the trim here and throughout the home, Peter used Fine Paints of Europe Brilliant Gloss, which contrasts the old and “makes things feel like a shiny, new car.” 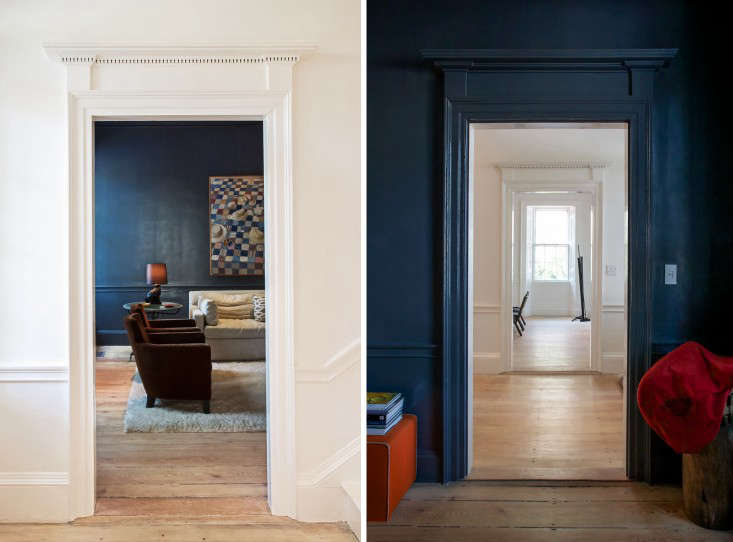 Above: The view from both in and out of the media room; its dark recesses create a dramatic, chiaroscuro effect. 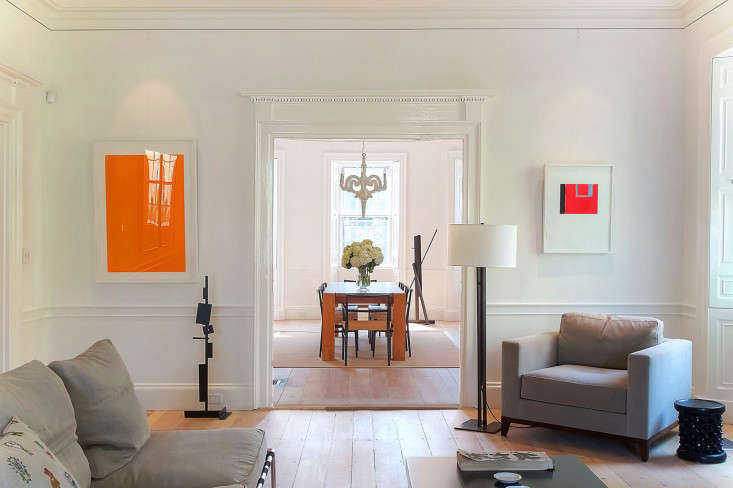 Above: Strict symmetry, a hallmark of the Federal style, results in impressive enfilades throughout the home. As seen in this view from the living room into the dining area, Peter took advantage of these architectural details to frame pieces of furniture and art in distant rooms. (Here, the red and orange abstracts are by Robert Motherwell. The black sculptures are Peter’s own work, available by contacting Peter here.) The all-white walls also serve to enhance the sense of movement and light. 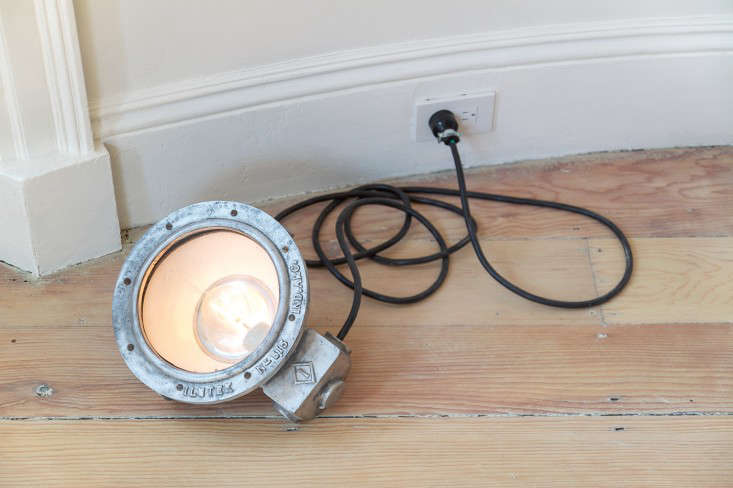 Above: To further emphasize the home’s qualities of light and air, Peter whitewashed the old growth pine floors with Rubio Monocoat, a natural, zero-VOC product that, according to Peter “actually smells great after application, cures in a couple of days and has no sheen whatsoever.” Throughout the downstairs and in the kitchen especially, the couple salvaged 24-inch floorboards from the attic to replace and patch old flooring. 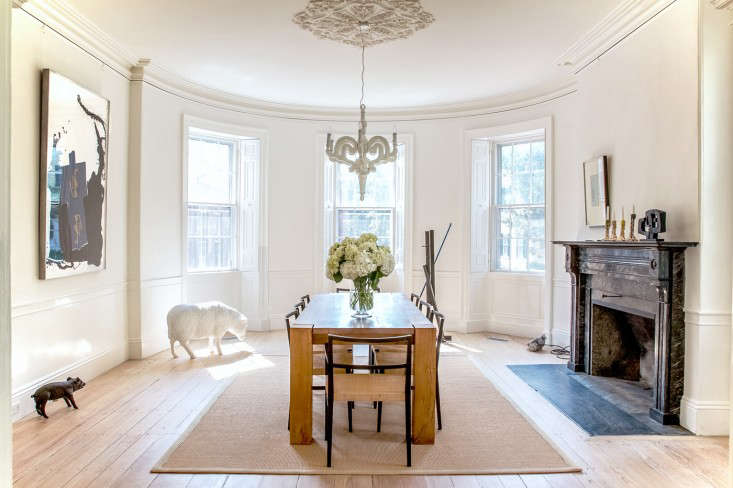 Above: In the dining room, a set of elegant bow windows host one of Peter’s own metal sculptures. Whimsical accents such as the sheep statue and Areaware pig counteract the formal nature of the room. The lithograph on the wall is a Robert Motherwell. 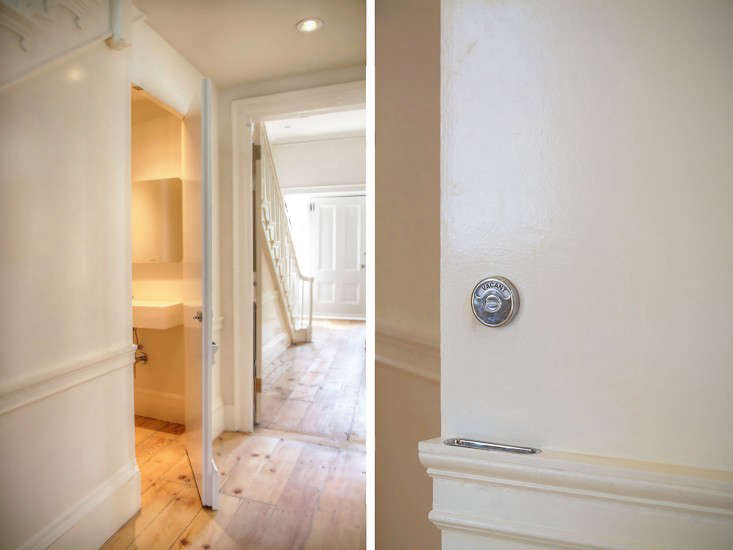 Above: For the most part, Peter respected the original plan and details of the house. Besides the updated kitchen, his one concession to modern living was to install a bathroom (as well as a coat closet) on the ground floor, cleverly hidden below the main stairs. Seamlessly integrated, the door continues the line of the moldings, a small “Vacant” sign the only indication of the bath within. 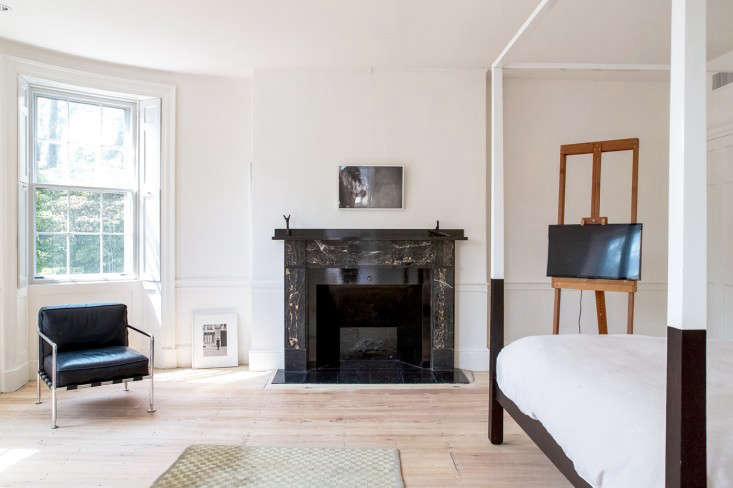 Above: Upstairs in the master bedroom, lithe furniture creates an airy, peaceful feel. Minimal black accents both complement and direct your attention to the centerpiece of the room, the dark marbled fireplace. 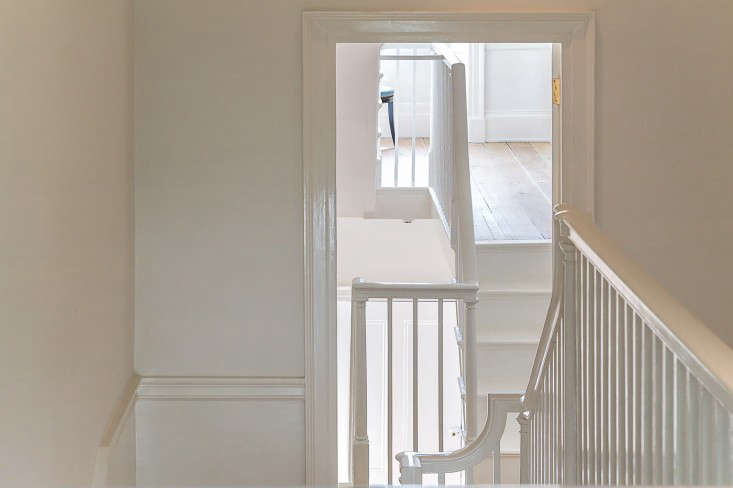 Above: One of the most stunning architectural features of Peter and Marty’s home is the double staircase, one set at the front and a “summer stair” at the back of the house. These are joined by a second floor landing, which allows light and air to pass through. For emphasis, Peter also painted these in Fine Paints of Europe Brilliant Gloss. 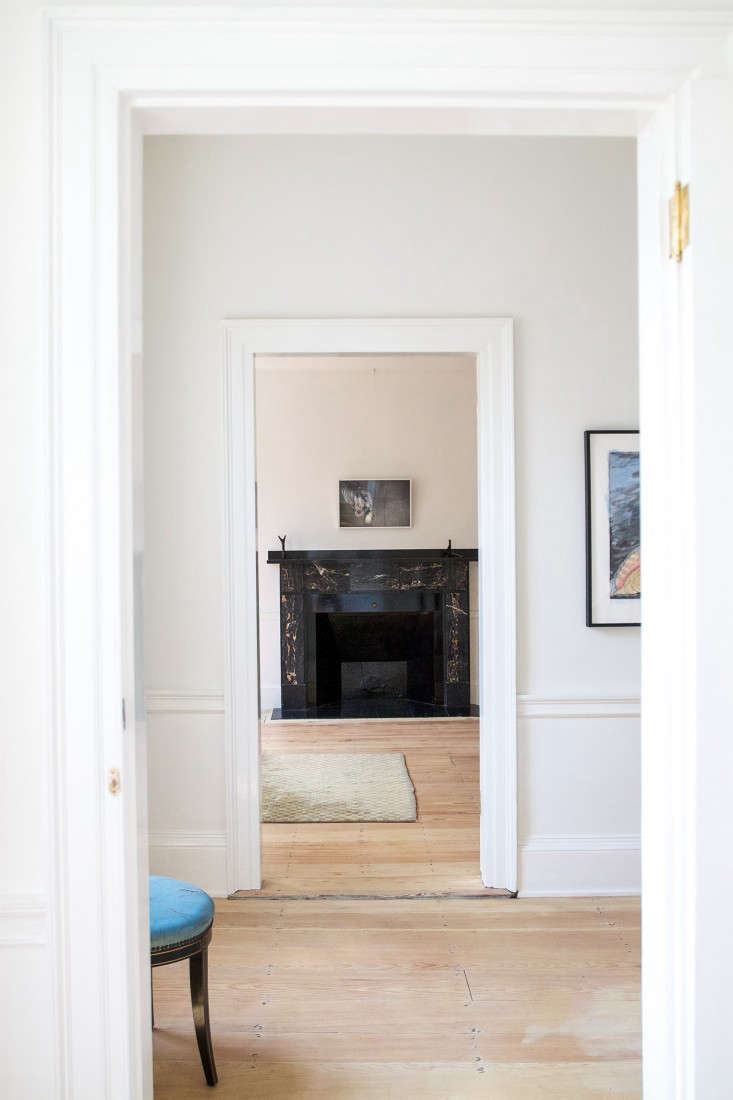 Above: The view from a guest room, through the hall, and into the master bedroom. 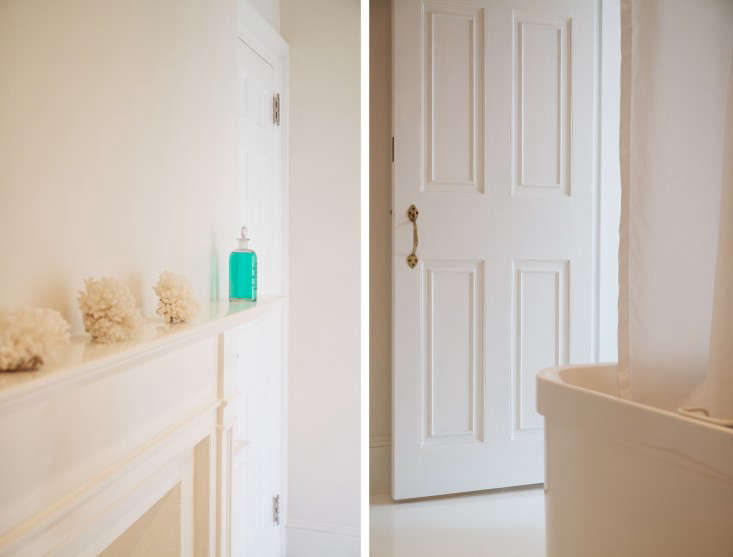 Above: In addition to redesigning the two existing midcentury commodes, Peter added another 1.5 bathrooms, including this Jack and Jill bathroom, located in between the two guest rooms on the second floor. With no windows, Peter maximized the light coming from the doors at each end by painting the entire room, including the floors and the interior of the fireplace, with the same Brilliant Gloss as the trim. Here again in a seamless marriage of contemporary and vintage features, the white walls and modern bathtub stand in contrast to the historic details of the door and mantel. 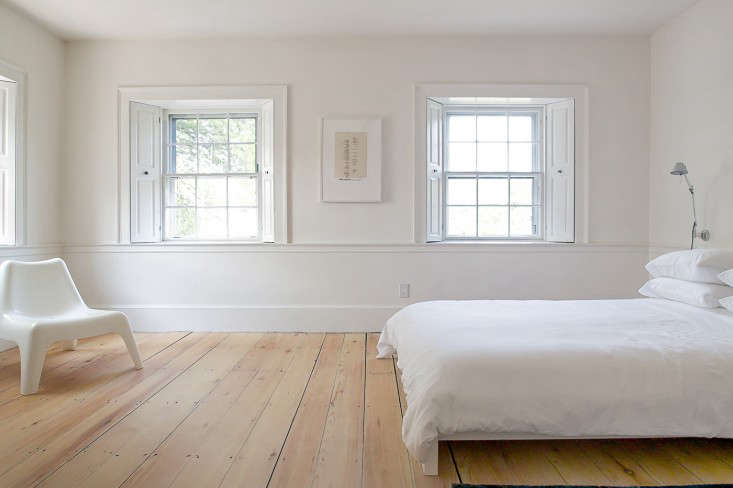 Above: On the third floor, a spare bedroom makes a serene retreat for guests. 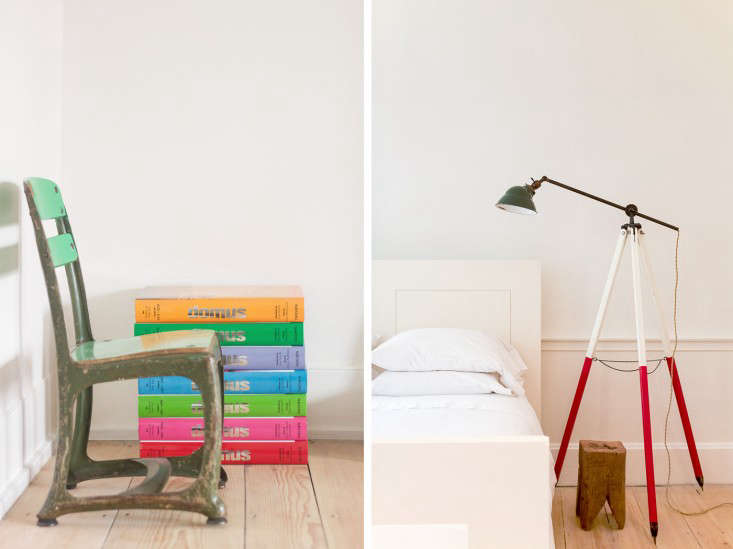 Above: Playful details in Peter’s office (L) as well in this guest bedroom (R) add a dash of color. 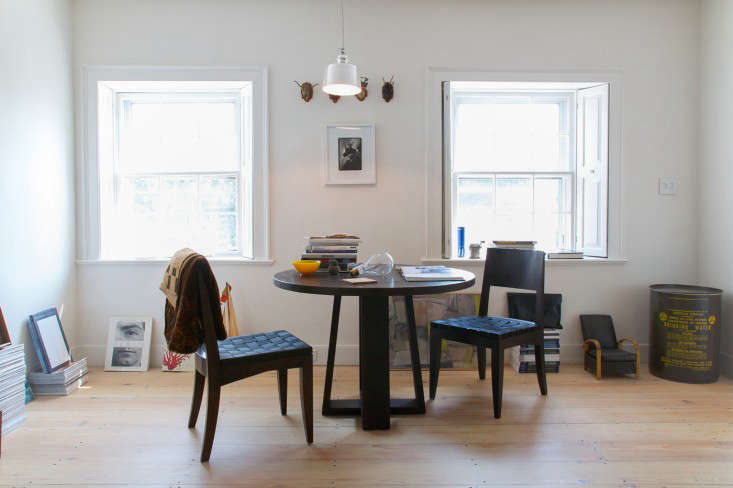 Above: Peter’s office on the third floor is at once spacious and intimate. 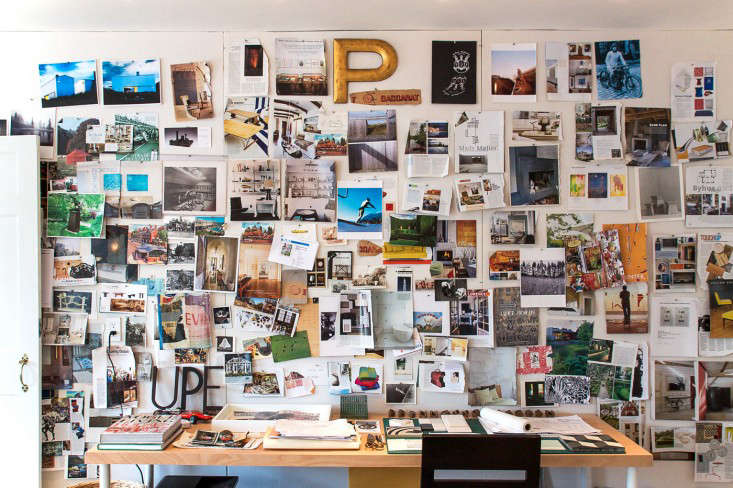 Above: Peter tacks inspirational images over his desk on a large pinboard. 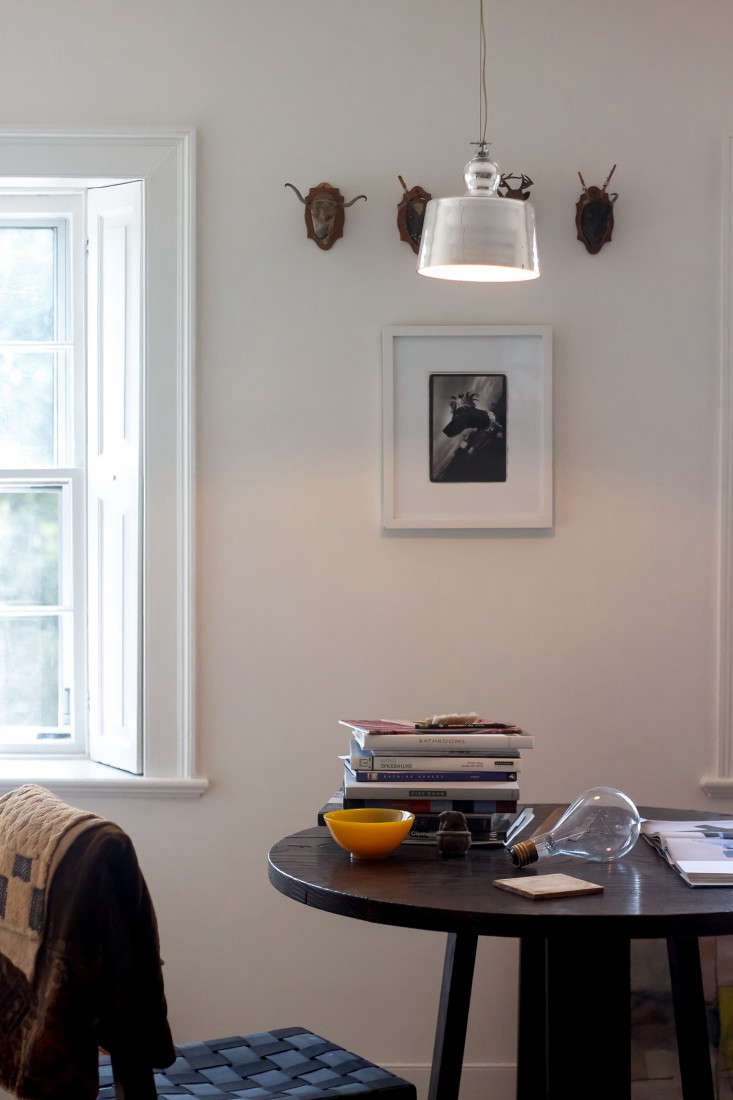 Above: Much of Peter’s vast collection of ephemera is on display in his office. 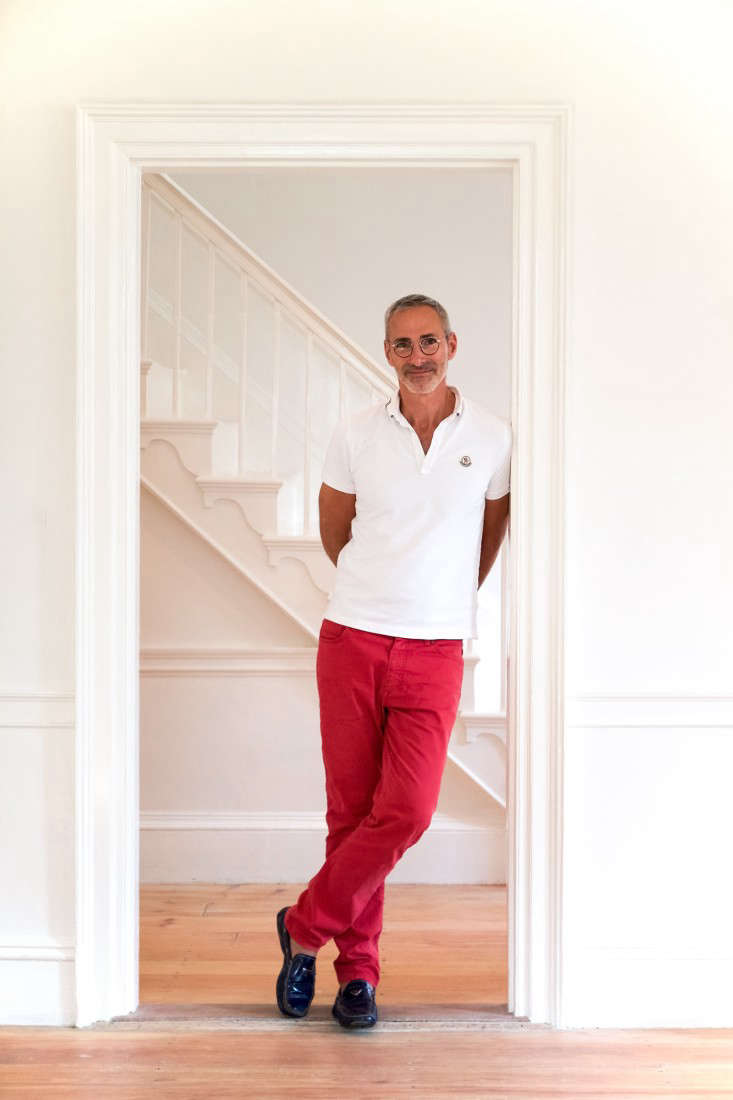 Above: Peter Cohen in his newly renovated home. 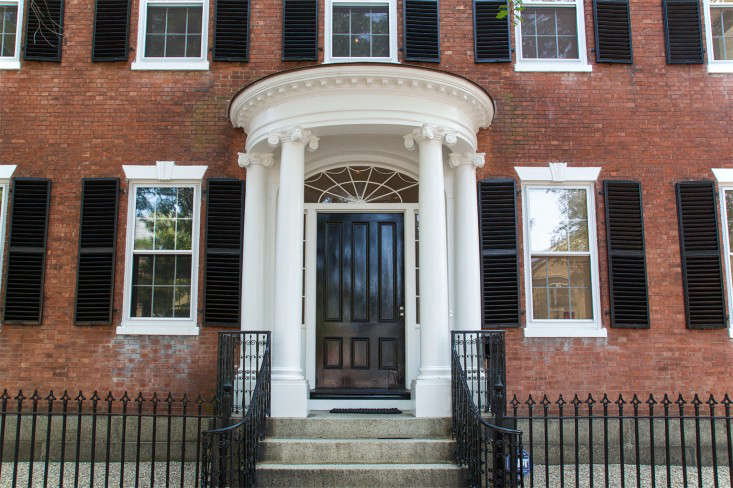 Above: Updated with fresh coats of black and white paint, Peter and Marty’s home maintains the grandeur of its rich historic past.

See another favorite Remodelista reader rehab at The Quiet Man: At Home with a NY Designer and A Moody, Belgian-Inspired West Village Townhouse.