“The craziest part was actually buying the building as a renovation in the first place; everyone else thought it should be demolished.” Designer Jacek KolasiÅ„ski is talking about the crumbling farm structure in his hometown of Szczecin, Poland, that he spent two years reinventing as his bright white, Nordic-accented dream house.

A restaurateur and Scandi furniture collector, KolasiÅ„ski learned his trade creating his own clubs and cafes, which led to a career shift as a full-time interior designer with a carpentry studio that makes bespoke furniture (his firm is called Loft). We discovered KolasiÅ„ski’s work via his Sexy, Minimalist Remodel in Berlin, an hour-and-a-half north of Szczecin. Next, he invited us to take a look around the family forge, which he shares with his wife, a biology professor at the University of Szczecin, and their teenage daughter. 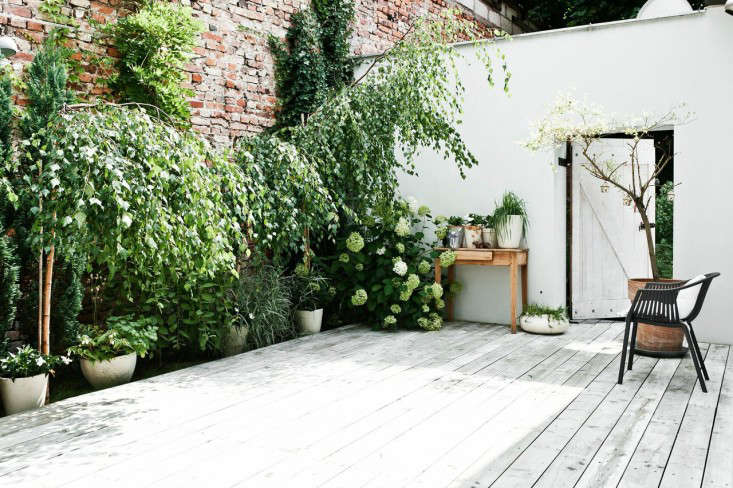 Above: A courtyard designed by KolasiÅ„ski opens off the back of the house. Located on the edge of a forest just 10 minutes from the Szczecin city center, the setup is rural–”we have visits from wild animals daily,” says KolasiÅ„ski–without being remote. 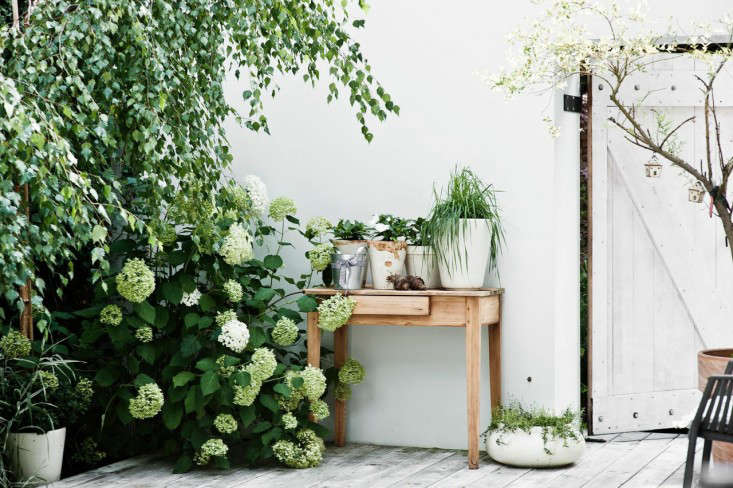 Above: KolasiÅ„ski and his wife planted a border of birch and cypress trees along with hydrangea and wisteria, and in the summer, they add “loads of seasonal plants in pots–at my wife’s request, all flowers are white.” 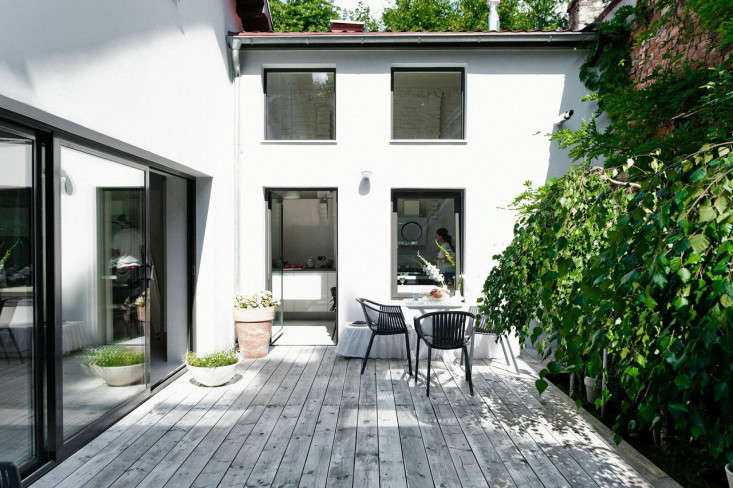 Above: The century-old structure now has lime plaster walls and new windows. The courtyard patio opens to the living room and kitchen, and the Loft workshop is located on the other side of the old brick wall. 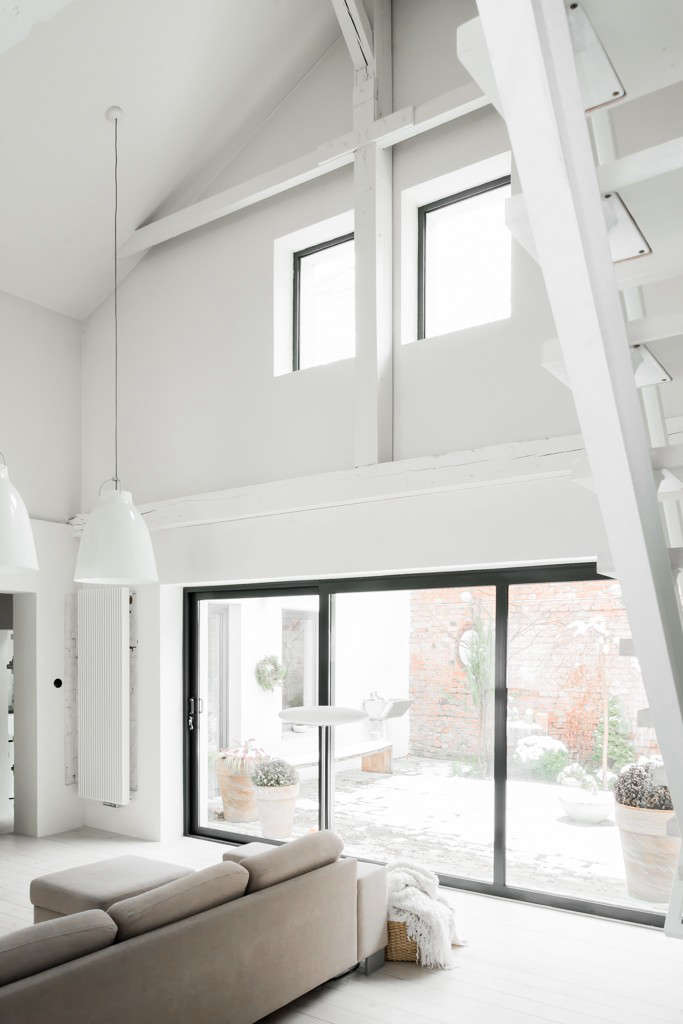 Above: The opened up interior is 1,500 square feet: “We had to do a lot of demolishing and most of the ceilings were liquidated,” says KolasiÅ„ski, “the ones in the living room are now six meters [19.6 feet] high.” Like most of the furnishings, the sofa is Scandinavian–it’s by Bo Concept and “already very old but very comfortable.” The hanging light is the Caravaggio by Cecilie Manz, a design we singled out in the Remodelista 100. 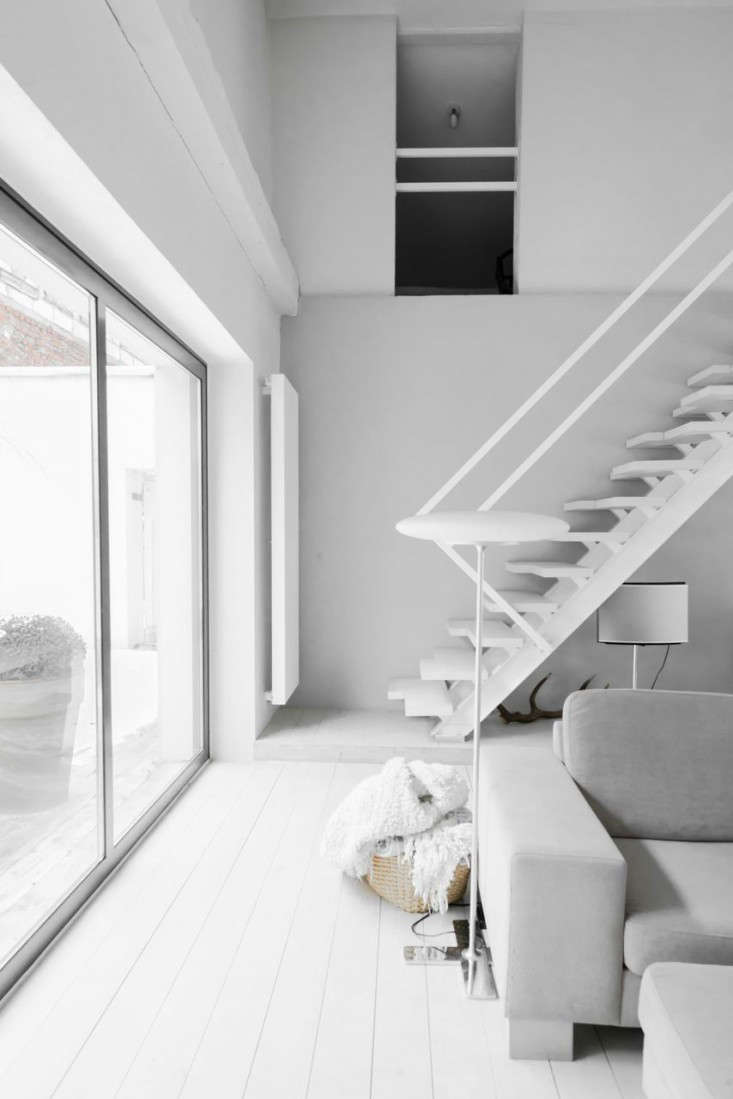 Above: After re-creating the interior, KolasiÅ„ski cloaked it all in a custom-mixed warm white (“pure white blended with several shades of gray”) and added a Danish oil finish to bleach the pine floors. “So much white may seem cold, but in reality it’s very cozy, thanks to all the light that comes through the many windows,” says KolasiÅ„ski. The newly inserted stair, which leads to his daughter’s room, had to fit in a very narrow space and is one of his proudest design feats. 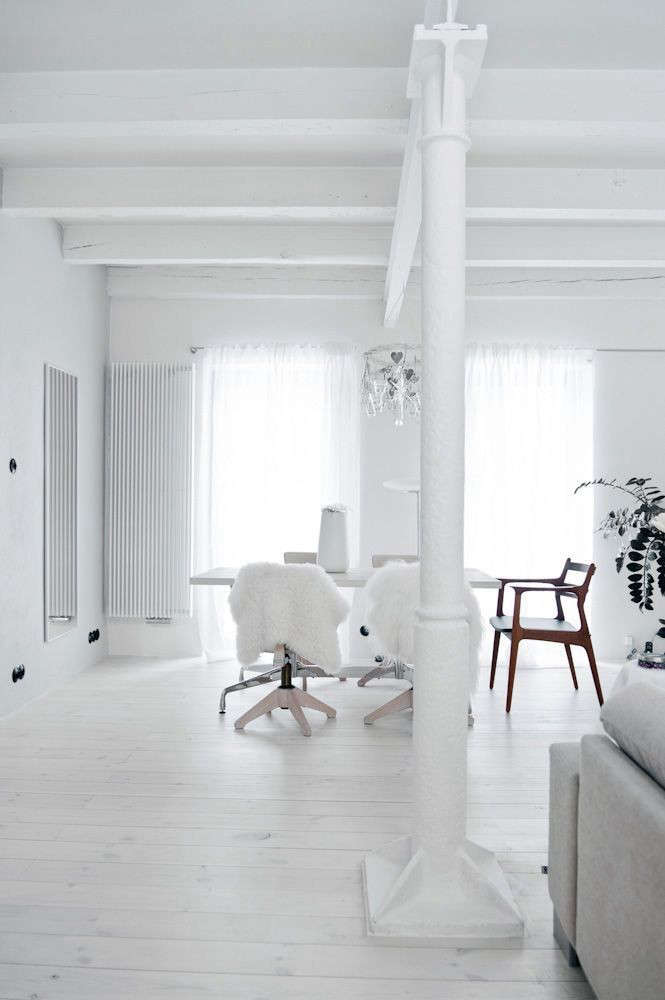 Above: In the dining area, a Vitra table is surrounded by Danish midcentury chairs–one of KolasiÅ„ski’s firm’s specialities is restoring Scandi classics, some of which he sells at Loft. Like the suspended white radiators? We do, too–see Remodeling 101: Wall-Panel Radiators. 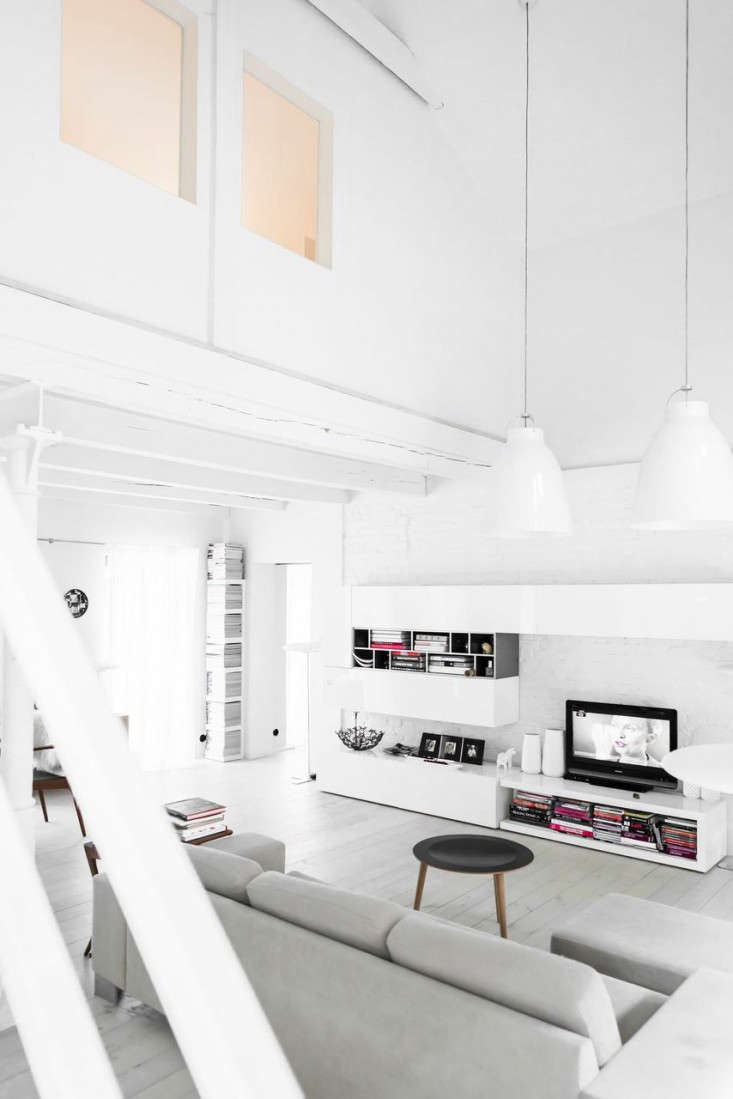 Above: A bit of black anchors the family’s gathering spot. For advice on picking the right shade of white, see Remodeling 101: How to Choose the Perfect White Paint and 10 Easy Pieces: Architects’ White Paint Picks. 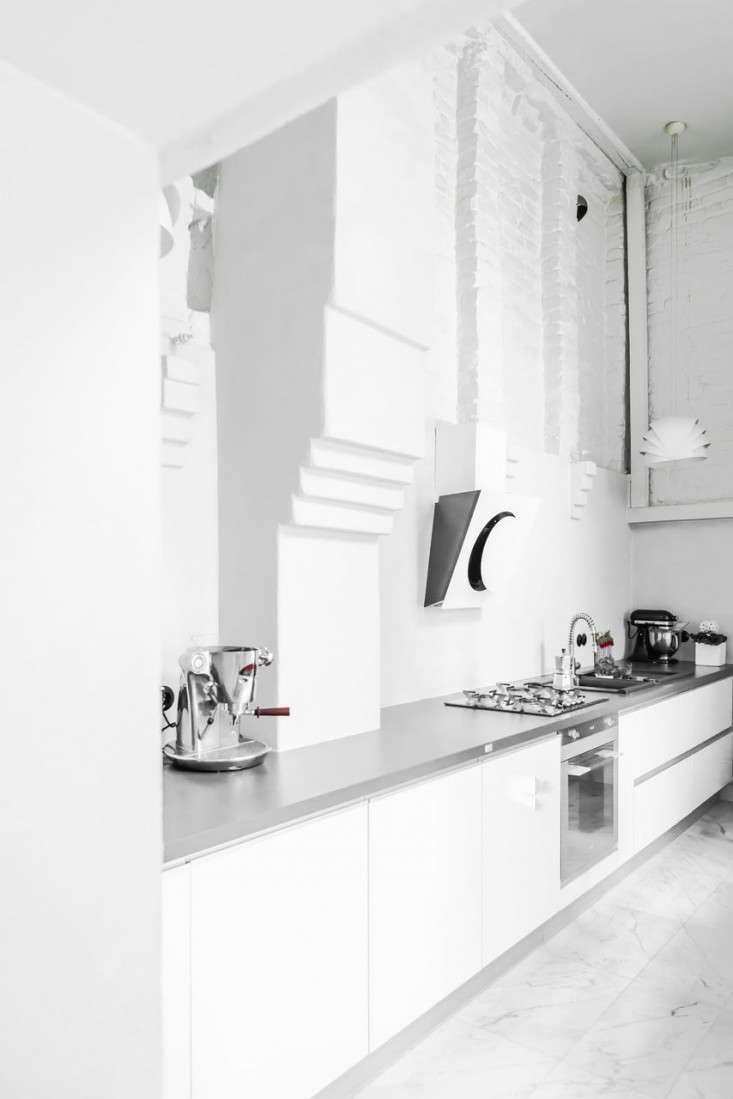 Above: Part of a separate forge building now connected to the main house by a corridor, the kitchen pairs original detailing, chimney included, with lacquered white cabinetry designed by KolasiÅ„ski. The counters are oiled slab MDF and the floor is marble tile with radiant heating. 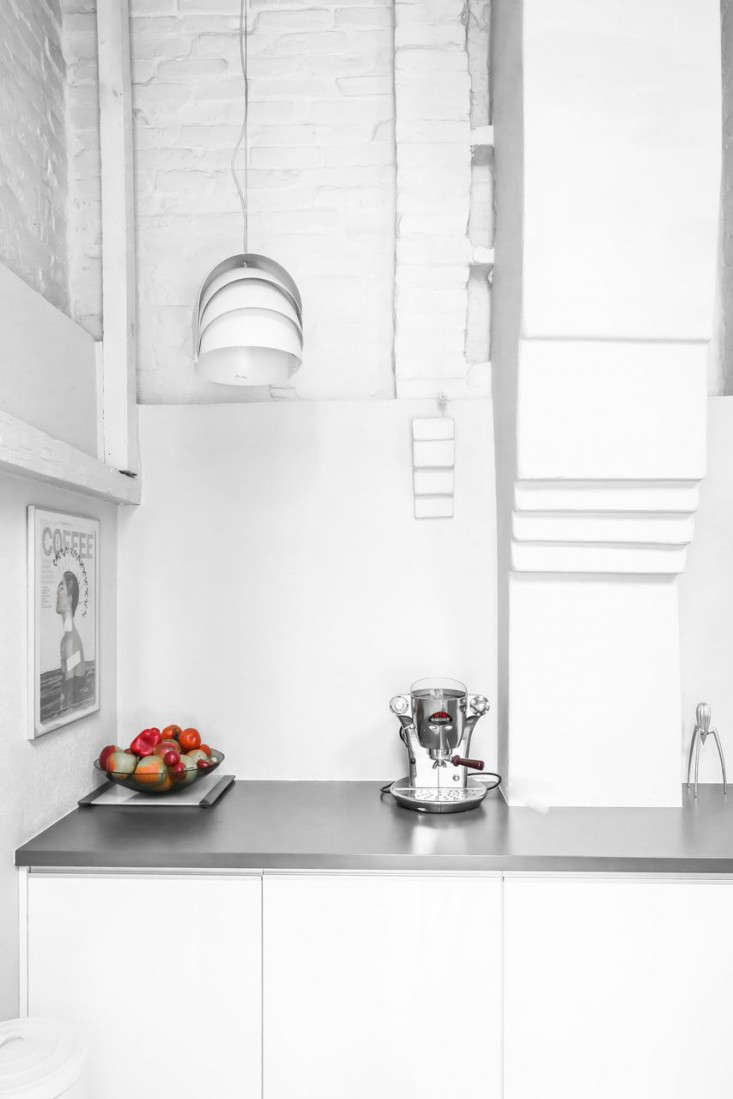 Above: The multi-domed pendant lights, one at each end of the counter, are by Jorn Utzon (“he’s the Danish architect who designed the Sydney Opera House,” says KolasiÅ„ski) and came from Danish company Lightyears. Like all the lighting in the house, they were purchased on family trips to Copenhagen–”we go often; it’s close to us and is my favorite city.” 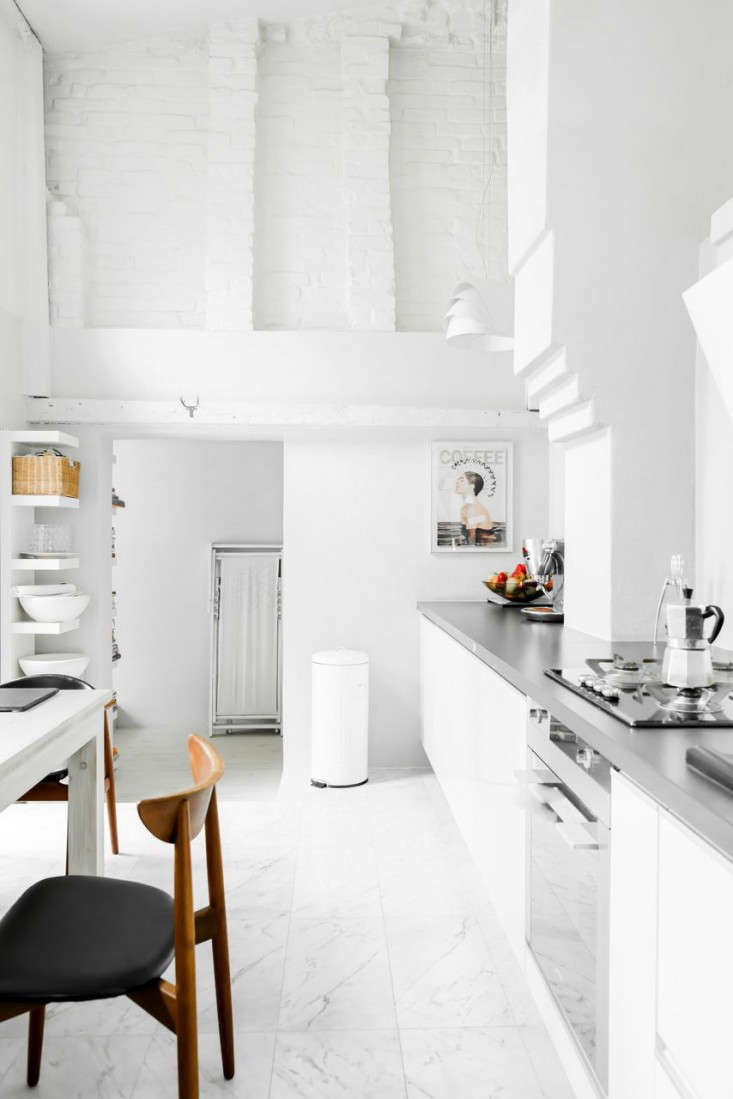 Above: A pale wood table and open shelving are incorporated into the brick-walled space. The appliances are by Smeg. 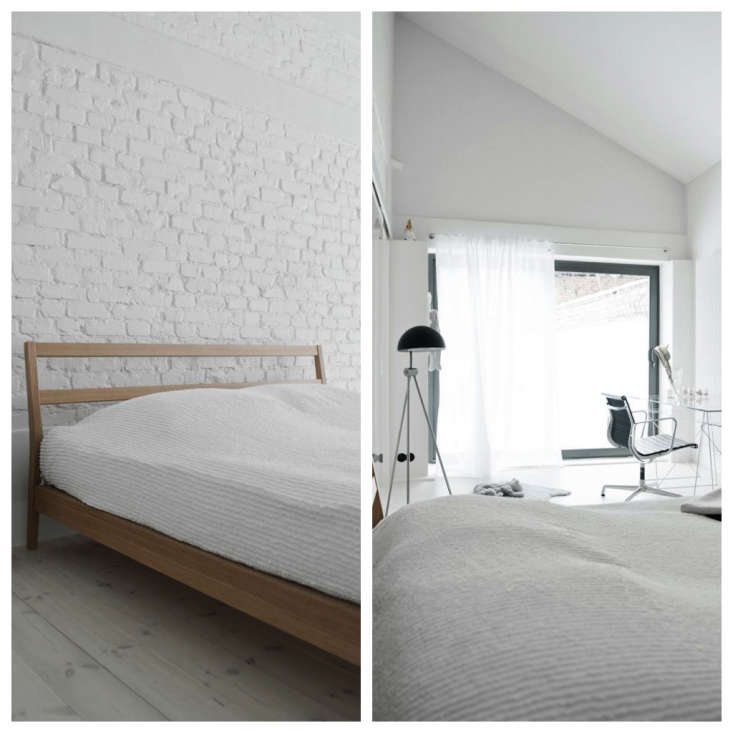 Above L and R: The cocoon-like master bedroom, with a closet hidden behind white glass doors, has a bed frame from Muji. The tripod lamp is the Radon Floor by Hans Sandgren Jakobsen from Lightyears. 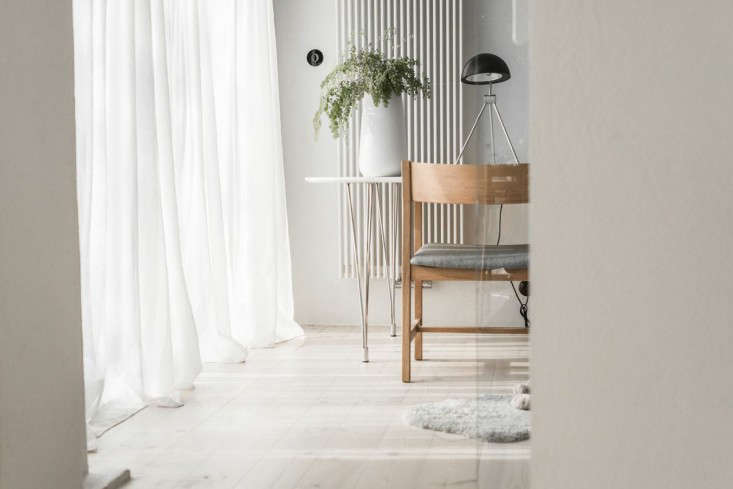 Above: A Radon Table lamp on the room’s glass-topped desk. 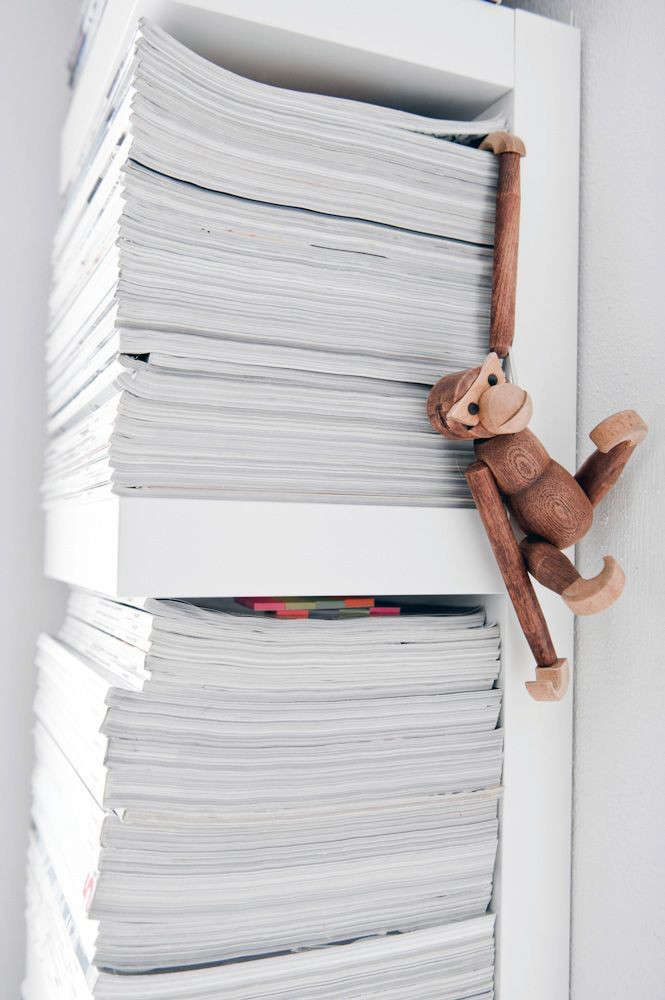 Above: To keep things looking orderly (and pale), KolasiÅ„ski stacks design magazines with the page-side out (but admits that it’s not the best system for being able to find a specific issue). The hanging monkey is inspired by the Danish Teak Classic designed in 1951 by Kay Bojesen, who also created the National Flatware of Denmark.

For more historic house overhauls, peruse our Remodel & Renovation posts. Two favorites: A Romantic Atelier in Japan and a DIY Zen Remodel in LA. And see LA designer Michaela Scherrer‘s “Whiter Shade of Pale House” (and read her case for monotone living) in the Remodelista book.

Kitchen of the Week: A New Kitchen Designed to Harmonize with a Vintage Pantry