We’ve been following Amanda Pays and Corbin Bernsen for years as they leapfrogged around LA. Amanda is an actress-turned-interior designer who has been on a decades-long house-flipping tear. Her style is pleasingly simple, sustainable (since before it was a buzzword), and thrifty: see, for instance, Backyard Bunkhouse and 11 Money-Saving Strategies from a Hollywood House Flipper. Her partner in the overhauling business is her husband: they’ve lived in 25 places in their 31 years of marriage (along the way, they had four sons), and Corbin—though busy acting, writing, and running his own production company—is a Star Handyman.

After being MIA for a while, they resurfaced last winter: “When Finley, the youngest of our four, graduated high school and took off for NYC, Corbin and I looked at each other and agreed it was time for another adventure,” she wrote us. “Our book, Open House, had just been released, so we decided to sell up in LA and take a book-signing drive across the country in search of our next project.” They made it all the way to the Hudson Valley, where Amanda’s old friend Priscilla Woolworth has resettled, along with a surprising number of other LA defectors. After experiencing their family’s first white Christmas, they decided to stay put.

They knew exactly what to do next: find a structure waiting to be given the Amanda/Corbin treatment. After four weeks of real estate hunting, they bought an 1880s little farmhouse in Germantown, New York, that “needed everything.” They camped out in a loft rental in nearby Hudson, found a local contractor, and started the demo. “Weather dictates a lot here, which was an eye opener for us coming from California—and also learning that life has a slower pace here; love that,” says Amanda. Here’s what the place looks like a year later.

Photography by Rebecca Westby, unless noted.

The couple bought the house from third-generation owners (who live nearby and were selling when their mother passed away). It had been pale yellow with a front door that was “purple and white with a bit of turquoise thrown in,” says Amanda. It’s now painted a greenish-charcoal called Deep River and the door is Grand Canyon Red, both from Benjamin Moore. Upstate gentrifiers have been accused of defaulting to noirish exteriors, but Amanda defends the choice: “it’s a classic color that draws attention to the architecture and looks great against the backdrop of all these seasons. Plus for every dark house, there are ten white farmhouses around here.” Photograph by Jessica Dube.

“I’m continually struck by the adventure of this new experience and discovering an entire life so different from palm trees, beaches, convertibles, and eternal sunshine,” Corbin wrote on Facebook. “My biggest problem, I guess, if I’m allowed to go there, is that I have tons of time to think without all the distractions that I’m used to. And when the snow falls, it’s even more quiet than the normal quiet that I’m getting used to. You can hear your heartbeat, literally…or perhaps that’s the shoveling of snow forcing blood through my veins.”

She learned about remodeling historic houses from her father, who was an actor-turned-agent and the original house flipper in the family: “I grew up in southeast England, and he used to drag me around to look at properties and would ask my opinion. So the whole house buying, fixing-up, reselling thing came from my childhood. And Corbin, coincidentally, learned carpentry from his mother and uncle.”

Amanda tells us: “We’ve been at this practically since our first date, when Corbin showed me his house, which he had just overhauled himself, and I said, ‘I think we’re going to have to make some changes.’ It was full-blown Santa Fe-style and needed some tweaking and layering—some soul. The English in me came out. That’s when we started blending our styles, and buying and selling things.”

Their most dramatic move was to open up the main floor and introduce oak beams throughout that are both structural (the ones shown here) and cosmetic. The floor is the original sub floors stripped and sealed with Pure Matte Finish from Vermont Natural Coatings.

“I like a neutral balance, so drop cloths always work,” she says. “I usually make them into shades, but you hardly notice these curtains, and in the winter you can pull them shut to make the room feel warmer.” 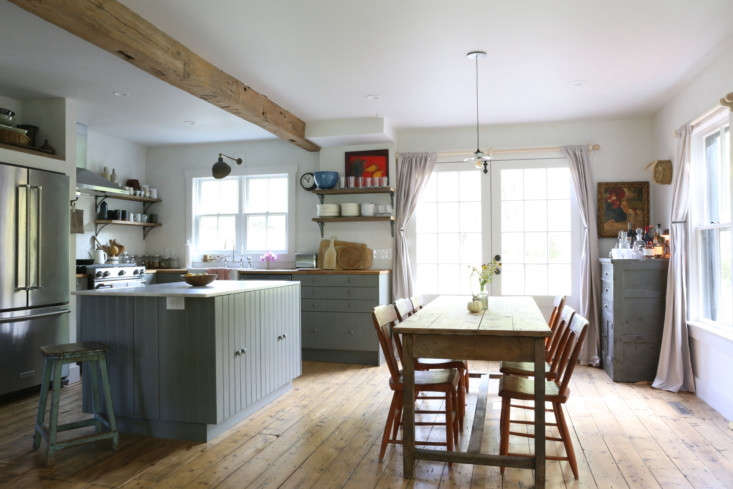 Above: The living space opens to a roomy dining area and kitchen. The cabinets are Ikea—with Ikea’s vertical-grooved Hittarp fronts in an off-white lacquer that Amanda painted herself. “This isn’t something they recommend but it worked well: even the chipping looks authentic. I used a heavy Kilz primer—no sanding—followed by two coats of Benjamin Moore Chelsea Gray in a satin finish.”

Amanda found the center island marble slab on Craig’s List for $150 and drove two hours in a U-Haul to get it.

Corbin bought the table—”maybe originally a schoolhouse piece, definitely European”—using money he had saved from the many years his mother tucked bills in his Christmas stocking. “I finally realized I don’t have to worry about never having a buck in my hand, and decided to honor my late mother with a table that we love.”

Recognize the dog painting? We do: it appeared in Remodelista: The Organized Home and our post Amanda Pays and Corbin Bernsen Air Their Dirty Laundry.

The Emmy is Corbin’s mother’s lifetime achievement award—Jeanne Cooper, the “grande dame of daytime,” was on The Young and The Restless for 40 years, and played Corbin’s mother on LA Law.

What’s next? Amanda reports that they’re looking for a larger place in the area to tackle next—”we’d like to have enough room for the whole family and friends—and some rescue donkeys and goats” The plan is to keep this house and down the line rent it out. “I want to host people in cool environments while I go gray and grow veggies,” says Amanda.

And for many places to stay in the area, consult to our Design Travel posts.