Amanda Pays and Corbin Bernsen recently took stock of their “nomadic marriage” and realized that in their nearly 30 years together, they’ve lived in 20 different houses. The two met in Hollywood when they were both focused on their acting careers—you might remember Corbin as LA Law’s Arnie Becker and Amanda as Theora Jones in Max Headroom. But what also brought them together was a shared interest in house overhauling: Amanda grew up in the UK helping her theatrical agent father remodel houses as a sideline, and Corbin learned carpentry at a young age by working on his godfather’s construction crews in LA.

They went on to have four sons—the youngest is now 19—and, as they pulled together house after house, they got more invested in remodeling. So much so that Amanda went professional (see 11 Money-Saving Strategies from a Hollywood House Flipper) and Corbin provided hands-on help (read Expert Advice: Corbin Bernsen, Star Handyman). Having broken the bank on their first place—which Steve Martin snapped up, furniture and all—they did a complete about-face and started devoting their work to simplifying and keeping to a tight budget. And along the way, they developed tactics that have proven successful on fixer-uppers all over the world. Lucky for us, they’ve now published their first book, Open House, a family scrapbook of sorts, in which they share photos of their many abodes and the stories behind them. Here’s their family farmhouse in the South of France, plus a dozen design lessons from Amanda and Corbin.

Photography by Tim Beddow from Open House by Amanda Pays and Corbin Bernsen, by permission of Gibbs Smith. 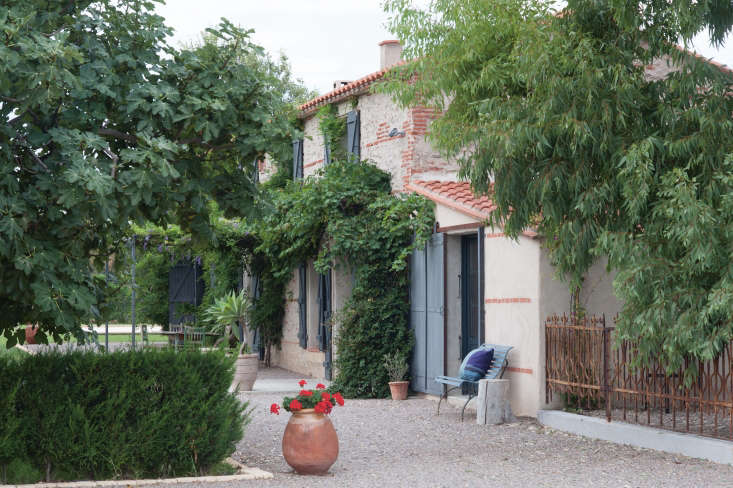 Approaching their work as “stewards of the property,” Amanda and Corbin began by stripping away the bad design decisions of the past and saving as many original details as possible.

At Mas Maroc, in the agricultural South of France near the border with Spain—the one project they say they plan to hold on to for the long haul—what was revealed behind an exterior coat of pink stucco was the original stone and brick facade, and evidence that parts of the structure are 400 years old.

For furnishings, they reuse what they have and fill in the blanks with vintage goods: “They’re typically better made and more affordable than new,” says Amanda, “and recycling is better for the planet.” 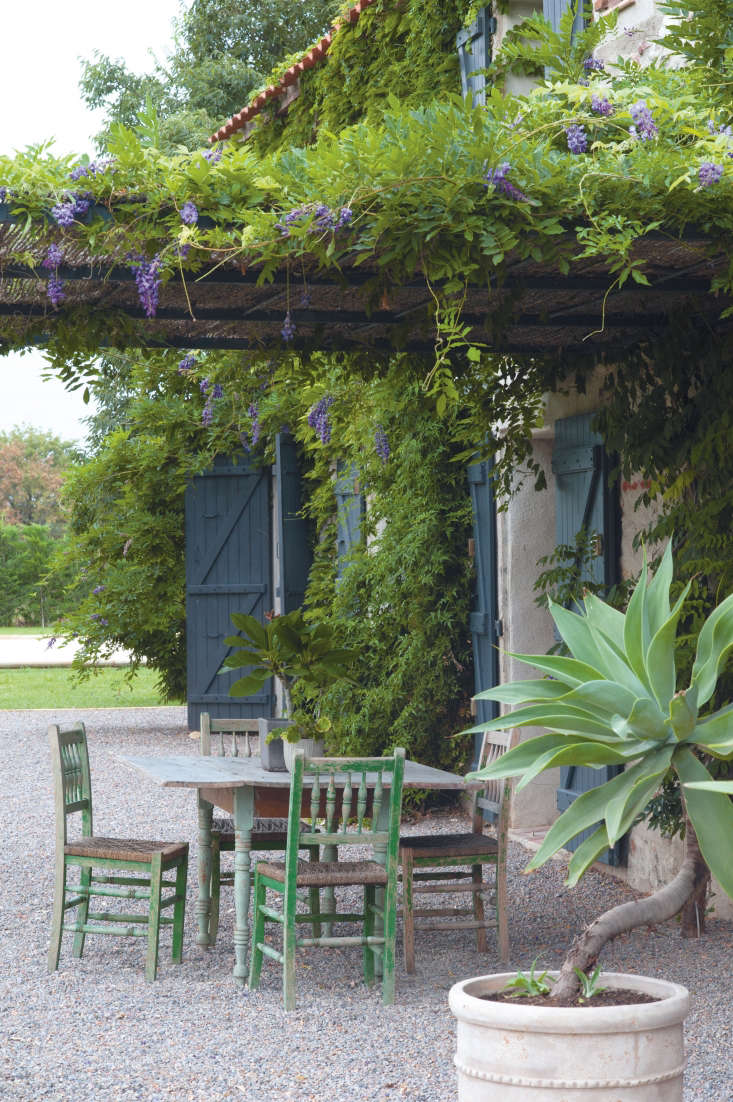 2. Be thrifty without sacrificing style.

The couple are genuinely cost-conscious: Their outdoor breakfast table was a long-ago find from the Rose Bowl Flea Market, and the chairs came from a wicker shop in nearby La Brisbal, Spain, for €30 each. They also buy appliances on sale from Build.com and Costco and use stone remnants for counters. Still, they get the results they’re after; for them, thriftiness inspires creativity. 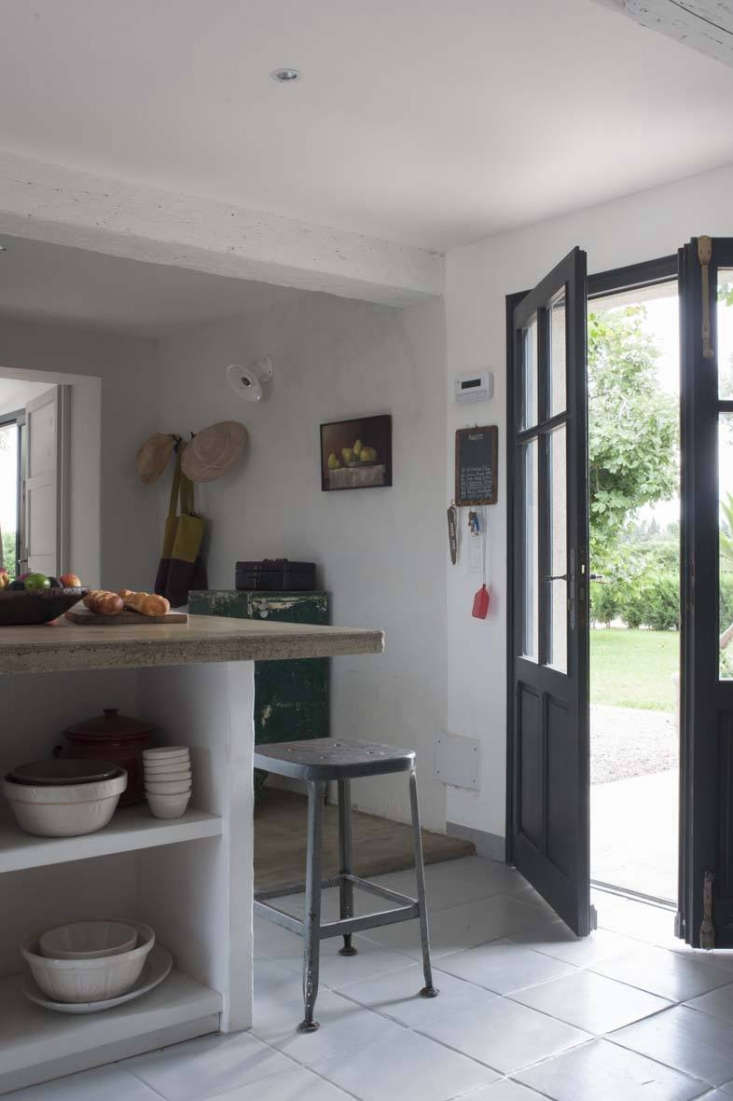 New French doors open to the kitchen and its cast-concrete island, another of the couple’s house staples (see their Studio City kitchen in the Remodelista book).

Amanda always goes with hardwearing finishes. In addition to concrete—”extremely affordable if you don’t mind a few kinks here and there”—favorites include outdoor paving stones used indoors, painted wood floors, and tiles. She didn’t like the dark terracotta color of the kitchen’s existing floor tiles, but rather than replacing them, she painted them gray: “In France, they have paint for every surface, so we got a ceramic paint.” 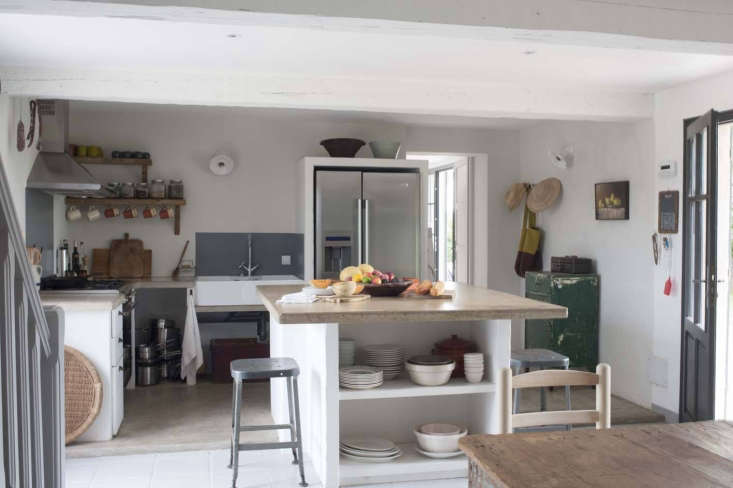 In all of her projects, Amanda selects a neutral palette of three or four complementary colors that she uses indoors and out to create a unified look. For walls and ceilings, she almost always sticks with white, and for woodwork and floors, gray is her signature—she used a pebble gray on the stairs and baseboards and a zinc gray on the doors, window frames, and shutters, and as painted backsplashes in the kitchen. (Also note the white frame around the refrigerator that matches the plaster base of the island.)

Some of Amanda’s favorite paint colors: Sydney Harbour’s Plaster of Paris and Benjamin Moore’s Stonington Gray, Decorator’s White, and Simply White. In France, she used Luxens paints—Blanc Interieur, Gris Galet, and Gris Zingue—from Leroy Merlin: “France’s answer to Home Depot,” (and also the source for most of the house’s appliances). 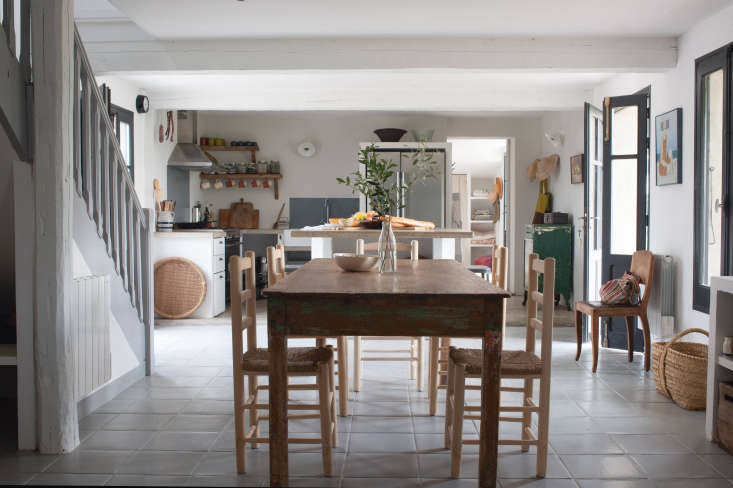 5. Open up the living space.

The 1,800-square-foot house had initially been very dark and divided into small rooms. The couple introduced French doors and windows and created a “combination kitchen-living area hub.”

Corbin, who is the resident space planner, says his goal is always to create “flowing rooms” and “a layout that makes sense.” Toward that end, his work almost always involves knocking down walls and letting in more light. 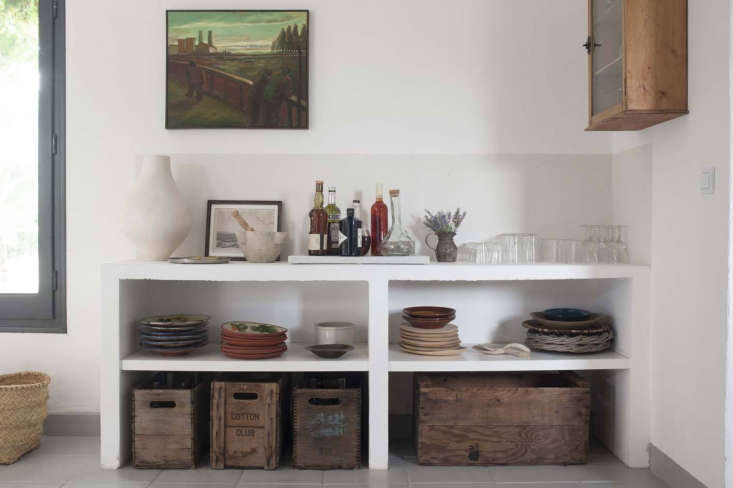 A plaster shelf, constructed by their contractor from a drawing, serves as the dining room sideboard. Red wine is kept in the wooden crates and glassware in the antique medicine cabinet. Note the subtle gray backsplash: “I used a pale gray to define the kitchen,” explains Amanda, “and repeated it here to connect the two areas.”

The couple are masters at inserting simple shelves; Corbin often makes them himself from old scaffolding wood. For examples, see our post on their Backyard Bunkhouse in LA. 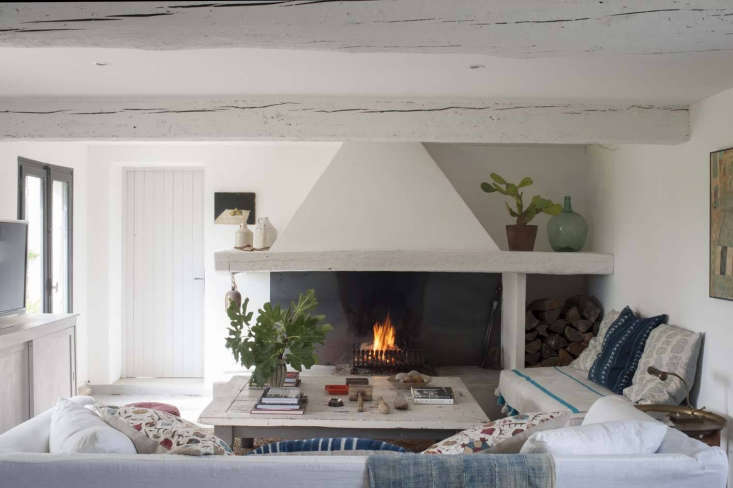 From living in southern California for so many years, Amanda and Corbin have a shared aesthetic that’s rooted in casual indoor-outdoor living.

It was a given that they’d whitewash the living room’s original beams and mantel. Their coffee table was made by Corbin’s brother from an old door: “It has lived in many homes with us and been repainted so many times,” says Amanda. 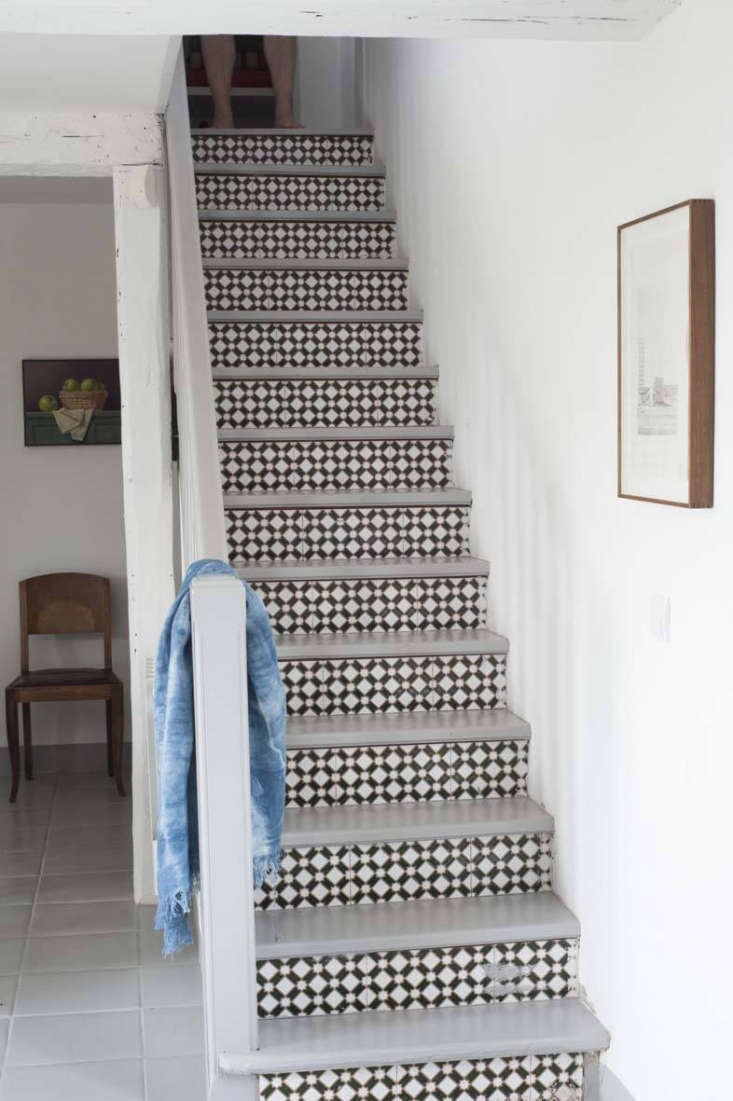 After establishing a neutral backdrop, Amanda adds texture and color via what she describes as “the ongoing encampment of books, pillows, throws, cherished possessions, and artwork.”

The tiled stair risers at Mas Maroc are another detail that came with the house—they were likely introduced in a 1970s renovation. 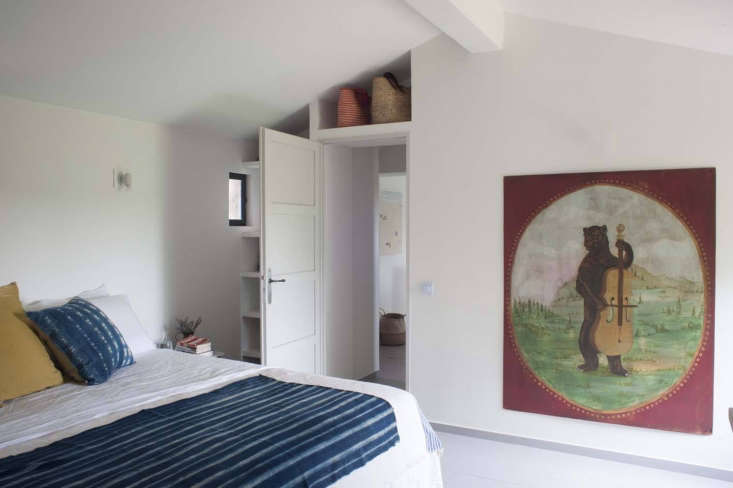 9. Coax utility out of every square inch.

There are four bedrooms in total, and carving them out involved rearranging the whole upstairs. In the construction, the couple took advantage of unused space over and next to the bedroom doors by introducing built-in shelves. The fiddling bear painting is another flea market souvenir from LA.

The marble sink came from an architectural salvage shop in La Brisbal, and their contractor added the concrete base and tiled backsplash. The brass faucet is a castoff from Amanda’s mother, who lives five minutes away—it had been in her kitchen and she was throwing it out. The Porcelain Wall Lights here and in the kitchen are Remodelista favorites from German company THPG (formerly known as Thomas Hoof). 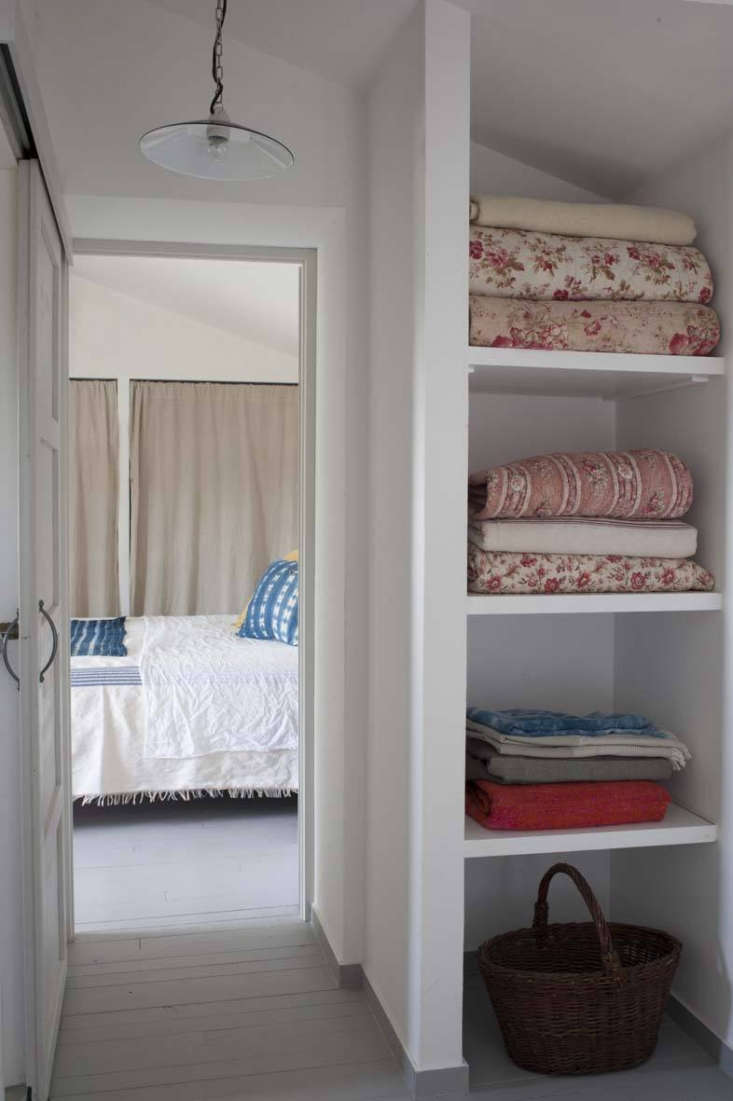 10. Make your own curtains.

Amanda takes a no-fuss approach to the finishing touches, such as window treatments. In one of her early remodels, she discovered that drop cloths make ideal curtains and shades. She’s used them ever since—that’s what is shown in the bedroom above (with floral quilts Amanda has been collecting over the years).

She launders the drop cloths first to soften the fabric. The sewing required is simple, and she often has it done inexpensively at a dry cleaner. As for curtain rods, she typically has Corbin make those out of galvanized plumbing pipe. 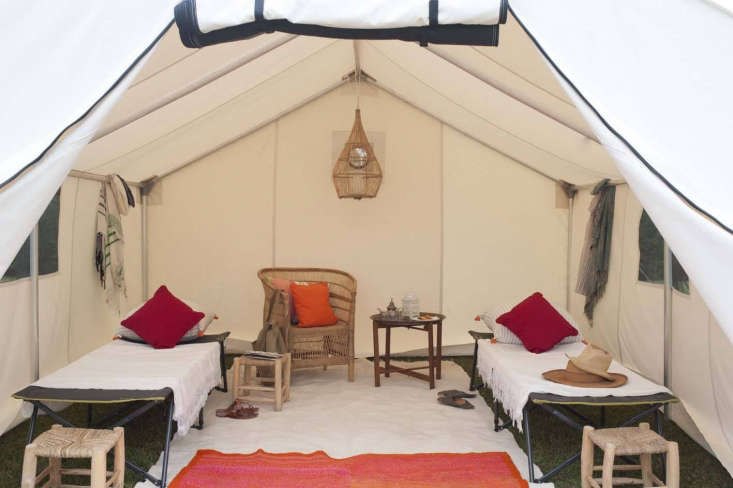 11. For extra space, consider a tent or a pergola.

On a movie-related work trip to Vancouver, the couple bought their canvas tent, which serves as an overflow guest room. It’s furnished with camp cots, a wicker hanging light (with a candle), and Peruvian rugs.

“In the summer, all you need on the beds is a pillow and linen sheets,” says Amanda. Go to Heritage Camping for a custom canvas tent source, and for another inventive use of camping equipment, see our recent Remodelista Design Awards Amateur Living Room: A World Traveler’s Living Room Tent.

From flipping houses, Amanda has learned that it never pays to fall in love with an item that breaks your budget: “I know from experience: There’s always going to be another find that makes you equally happy.”

Another of our favorite Pays-Bernsen projects: Amanda Pays and Corbin Bernsen Air Their Dirty Laundry.

Above the Shop: An Antiques-Filled Apartment at Maison Empereur (and It's for Rent)