This weekend Scott Specht and Louise Harpman of New York- and Austin-based Specht Harpman Architects talk about creating a modern home out of a 19th-century gambrel barn in Connecticut. They are available for the next 48 hours to answer your questions, so ask away!

After suffering a catastrophic fire, the barn, which stands on a former dairy farm, had very little of its internal structure remaining. The damage provided Specht Harpman, a member of the Remodelista Architect and Designer Directory, with the opportunity to completely rethink the interior. Though required by town codes to restore the original shape of the barn, the architects were no longer constrained by its inside structure. “We were able to move the roof ties up into the peak of the roof and add structural buttress reinforcement to the exterior,” Harpman says. “This allowed us to create two fully-habitable floors, and a large open volume for the main living and dining spaces.” Have a look at their results. 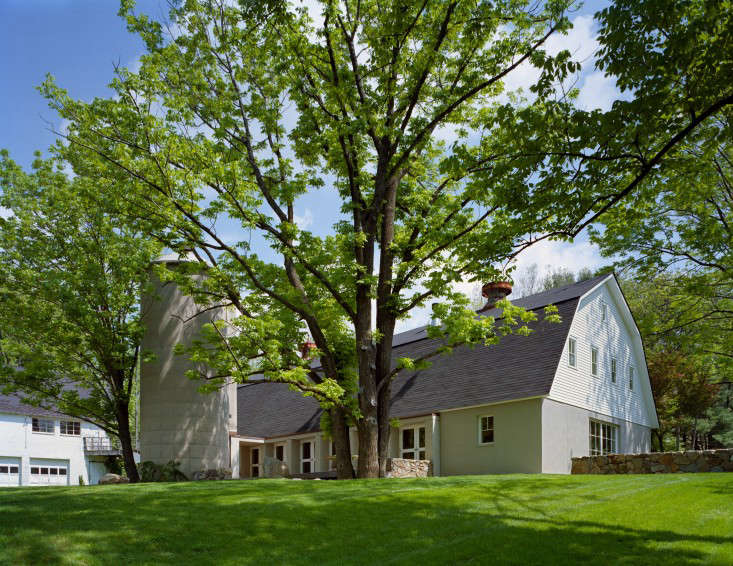 Above: The architects were required to restore the shape of the original gambrel barn and to maintain many of the traditional exterior features. 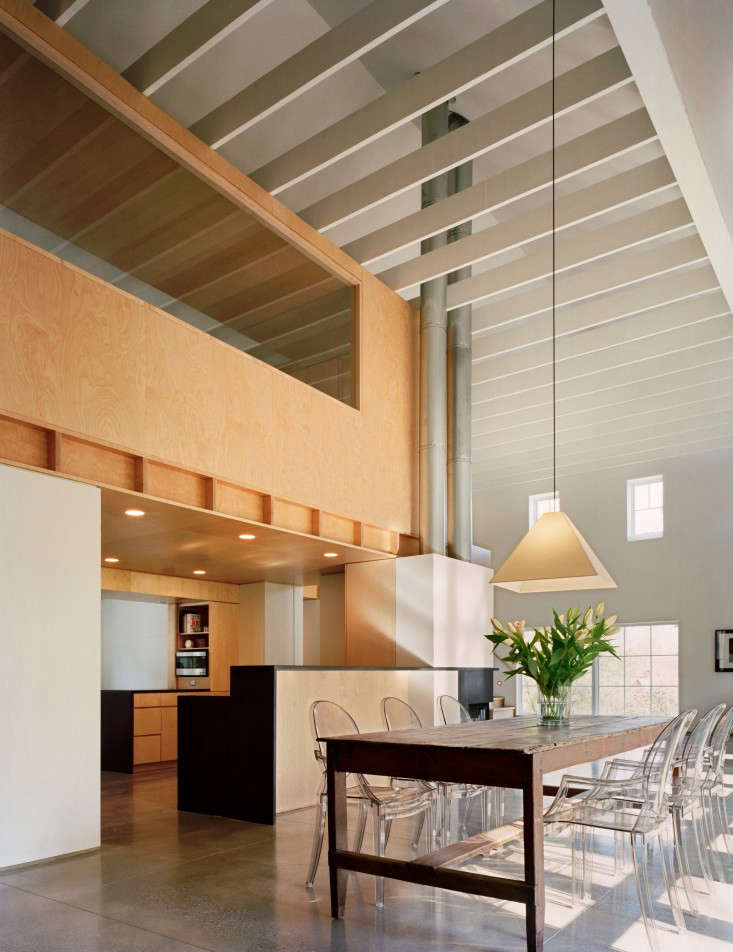 Above: The barn opens to a pared-down palette of materials–poured-in-place concrete, pre-finished maple plywood, white walls, and black countertops. “We love the sense of surprise that you get when you walk in,” Specht says. “The exterior’s traditional form doesn’t give away the fully modern interior.” 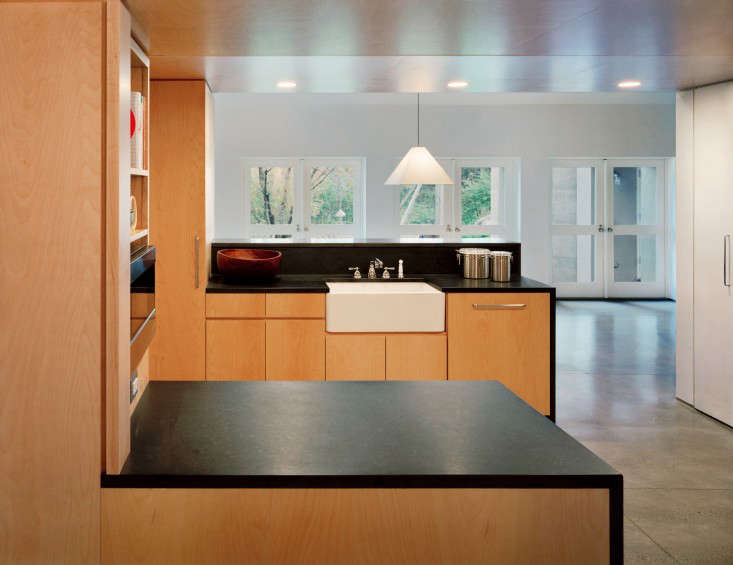 Above: “We have this theory about the savannah and the cave–at certain times, we want big open spaces, while at others, smaller, more defined spaces,” Harpman says. “The large living/dining room is part of the savannah, and the kitchen is the seam between the savannah and the cave. The two private offices for the wife and husband are very much caves. But then there’s an overlook above the living room area that is both a place of refuge and a place of prospect.” 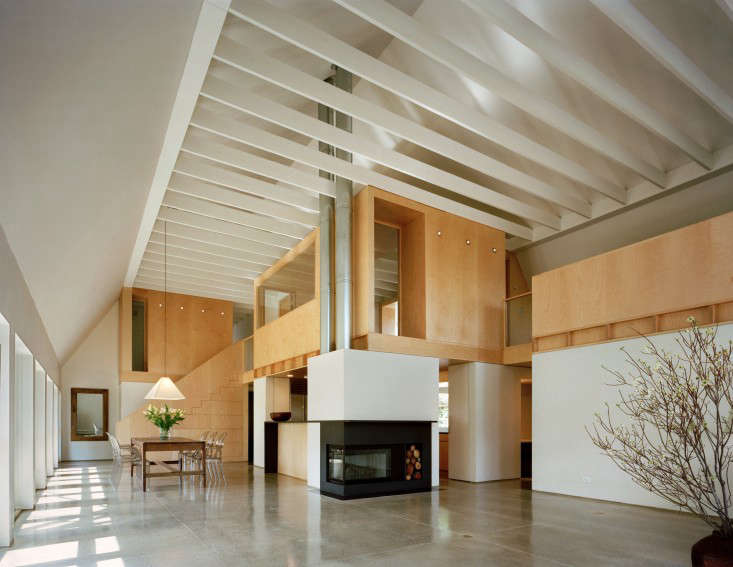 Above: At the sculptural core of the project, the master bedroom rises over the kitchen and weaves through the structural ceiling ties. It took more than 200 sketches for Specht Harpman to figure out the final design. 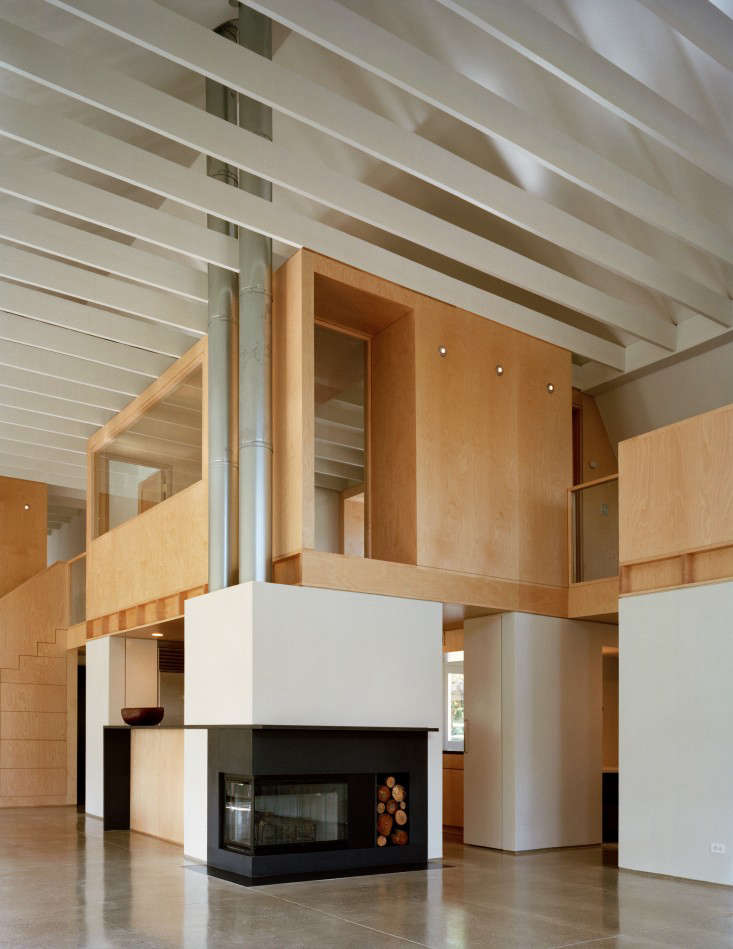 Above: The bedroom loft is built out of pre-finished maple plywood. The architects create texture and scale with a solid and void plywood band that subtly denotes the upper floor of the structure. The fireplace is made of blackened steel. 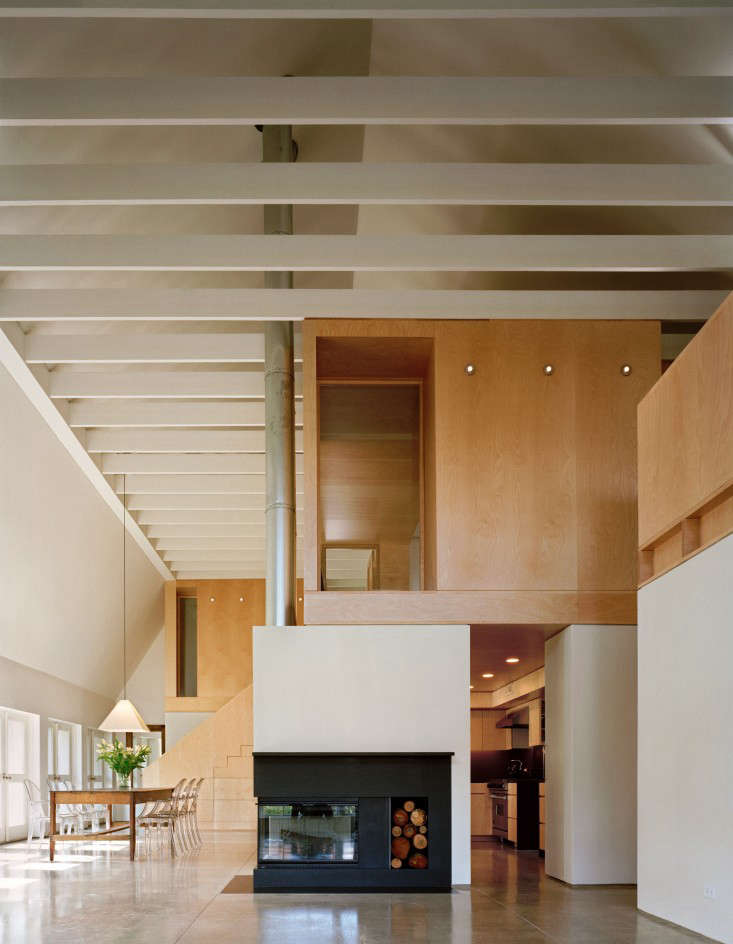 Above: The horizontal structural ties overhead offset lateral forces and hold the roof together. In the original barn, they were much lower and formed the hayloft above the animal stalls. 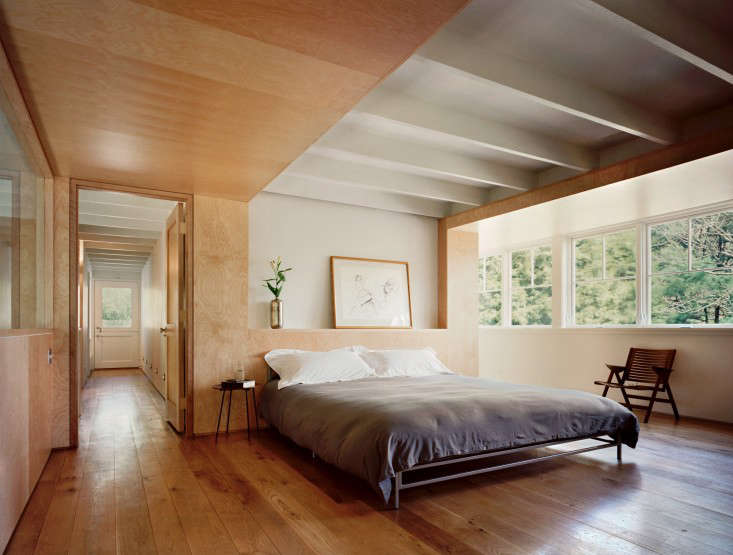 Above: “Throughout the interior, plywood panels help create a unity between the various spaces,” Harpman says. The material is used as both architecture and furniture–and in places such as the master bedroom headboard, shown here, the two cleverly merge. 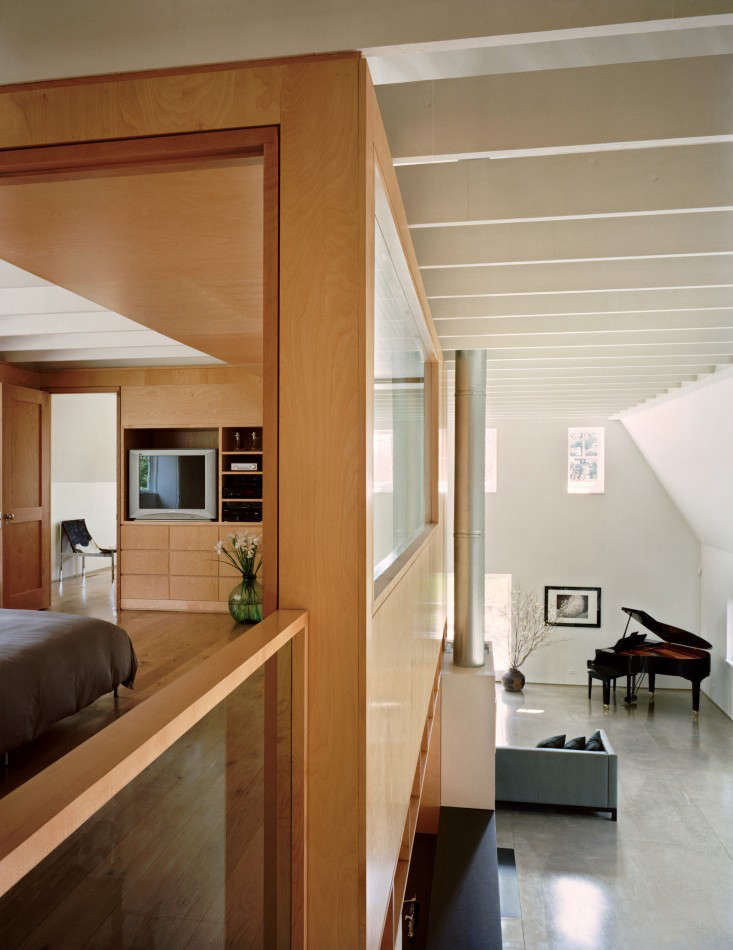 Above: “Our client tells us that the morning light from the bedroom is magnificent and that taking a nap here is divine,” Harpman says. 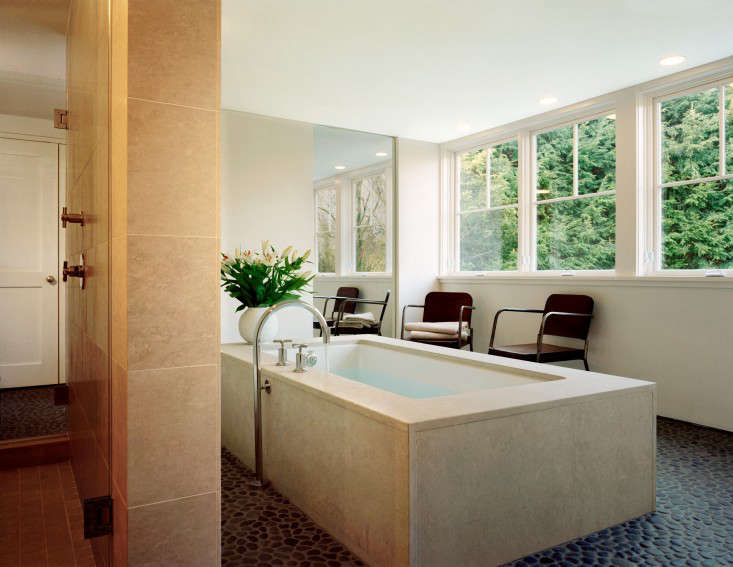 Above: Polished river pebbles create a sanctuary-like atmosphere in the bathroom. 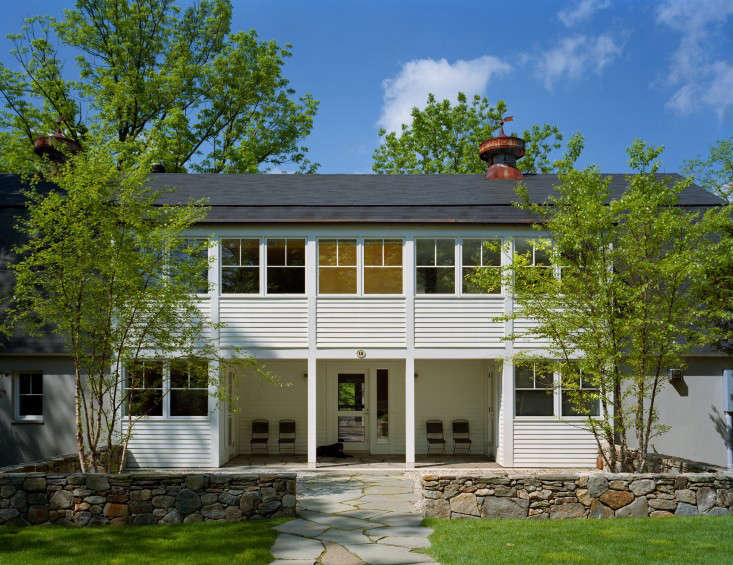 Above: “The new entry is very much in a traditional vernacular; we wanted it to look as if it’s always been there,” Harpman says. “Architecture doesn’t always have to toot its own horn.” 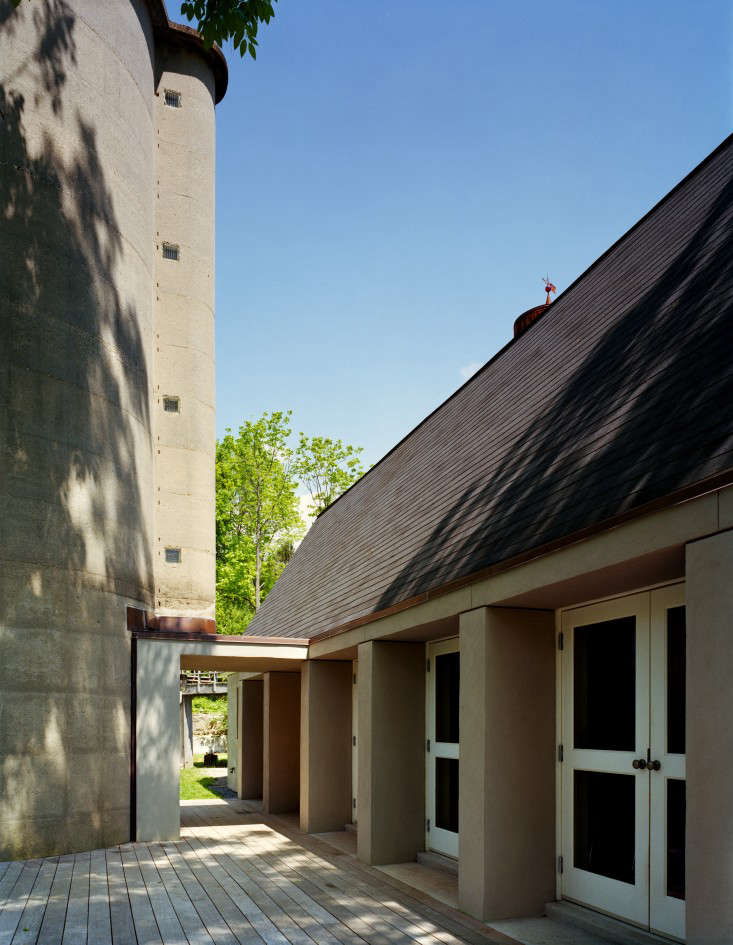 Above: A preserved grain silo stands on the side of the barn. 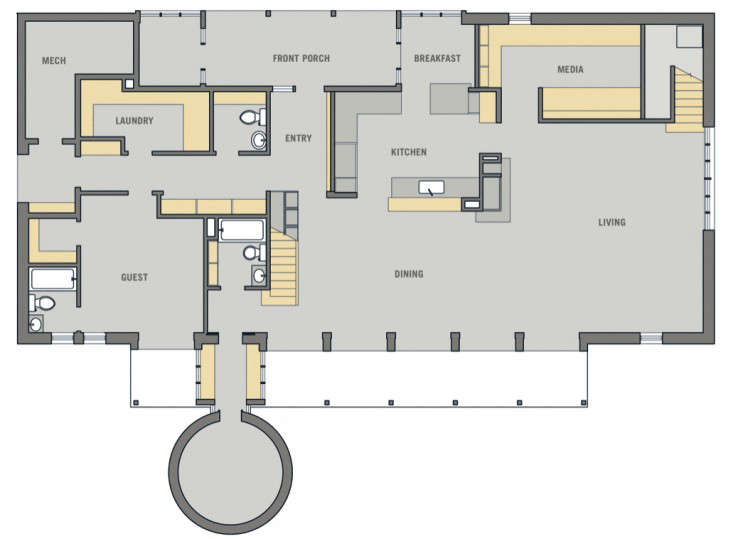 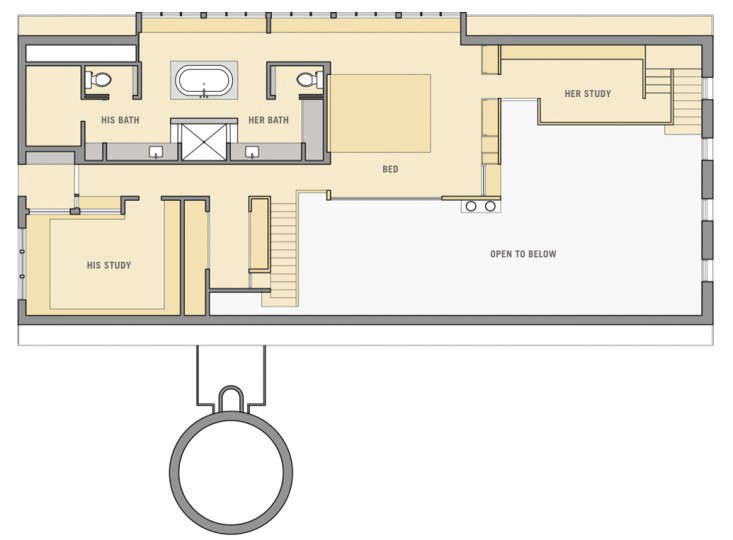 Above: Plans of the first and second floor of Specht Harpman’s Modern Barn.

Interested in converting a barn to a house? See two other inventive solutions: Kimberly Peck wrapped a historic barn with Structural Insulated Panels to make it energy efficient, and Buro II/ARCHI+I created a home from a barn that could be in the middle of a Flemish landscape painting.