David and Susan Scott, the husband-and-wife team behind Vancouver’s Scott & Scott Architects caught our attention a while back when they headed for the hills and built themselves an off-the-grid cabin lit by candlelight. Their latest project is equally enthralling: Commissioned by a family both parents are history professors to build a mountain house, the conservation-minded couple instead helped their clients locate a well-maintained midcentury post-and-beam house just below the gondola at Grouse Mountain in North Vancouver. Taking upon the design as well as the remodeling and restoration work themselves, Scott & Scott preserved the original 1,600-square-foot layout while introducing a refreshed look: open living spaces, a dramatic kitchen sink and counter carved from a single slab of marble, and pale wood all around. We’re hoping to be invited over for aprés-ski lounging. 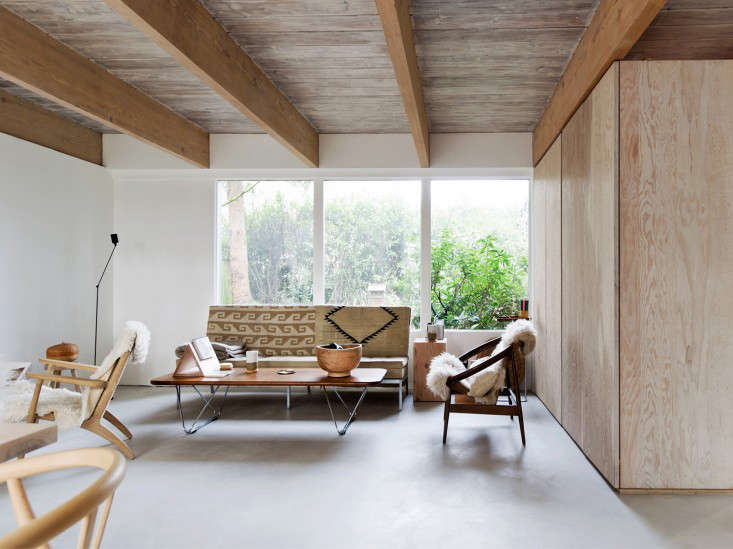 Above: “We were interested in the house for the strengths that it had. There was a very comfortable scale to it and we set out to work with its potential in a way that was not aggressive in approach,” David Scott tells us. “We wanted to bring more light into the living spaces and work with finishes that would brighten the space without erasing the history of the house. We worked with a site carpenter and a number of architectural graduates and students to refinish the wood and apply traditional finishes.”

Storage was consolidated into two plywood cabinets that maximize the open spaces and serve as room dividers. The windows are original with new glass and hardware here and there and help create what David describes as “a strong connection to the mature wooded yard with outlooks into the forest.” 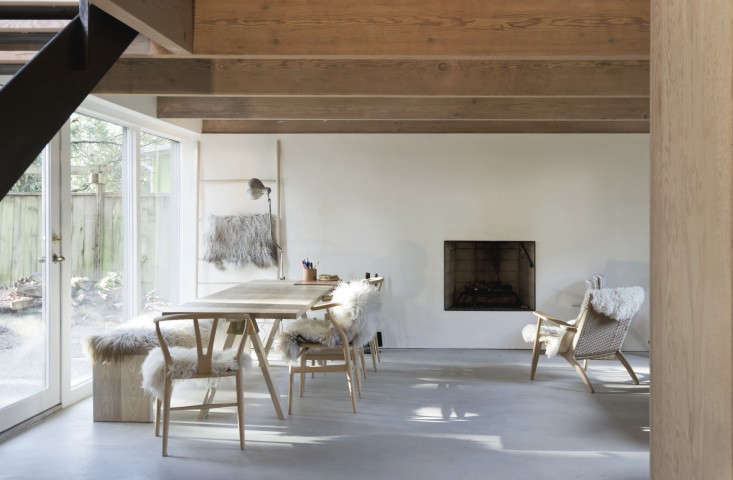 Above: The living area opens to a dining room with a new, minimalist steel-framed fireplace. Scott & Scott stripped the living spaces down to their shell and had the glossy textured concrete floor ground and smoothed matte. The walls were repaired and then finished in a natural lime-based whitewash from Germany. The lightening process continued on the Douglas fir beams, which received a Woca lye wash, and the structural decking was treated with a cloth-applied pigmented oil. Read about how to create the look in Remodeling 101: Easy Whitewashed Scandi Floors. 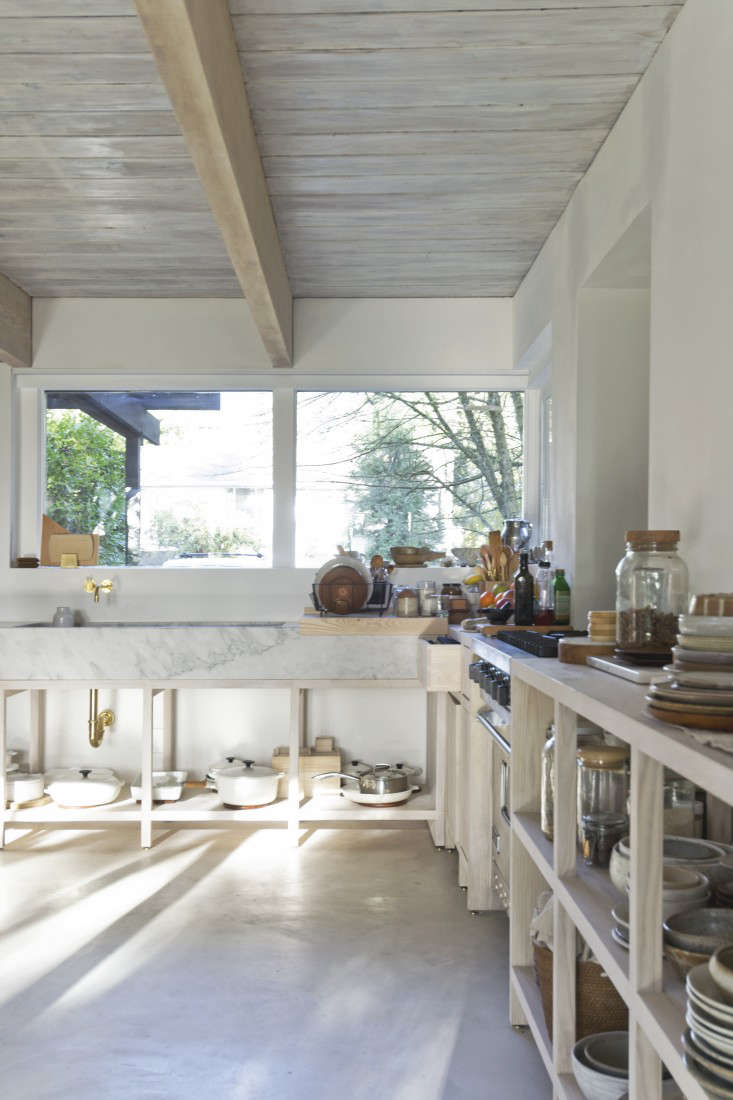 Above: By making use of the existing kitchen appliances and forgoing a dishwasher, the owners were able to splash out on a marble counter with integrated sink and open storage of solid ash. 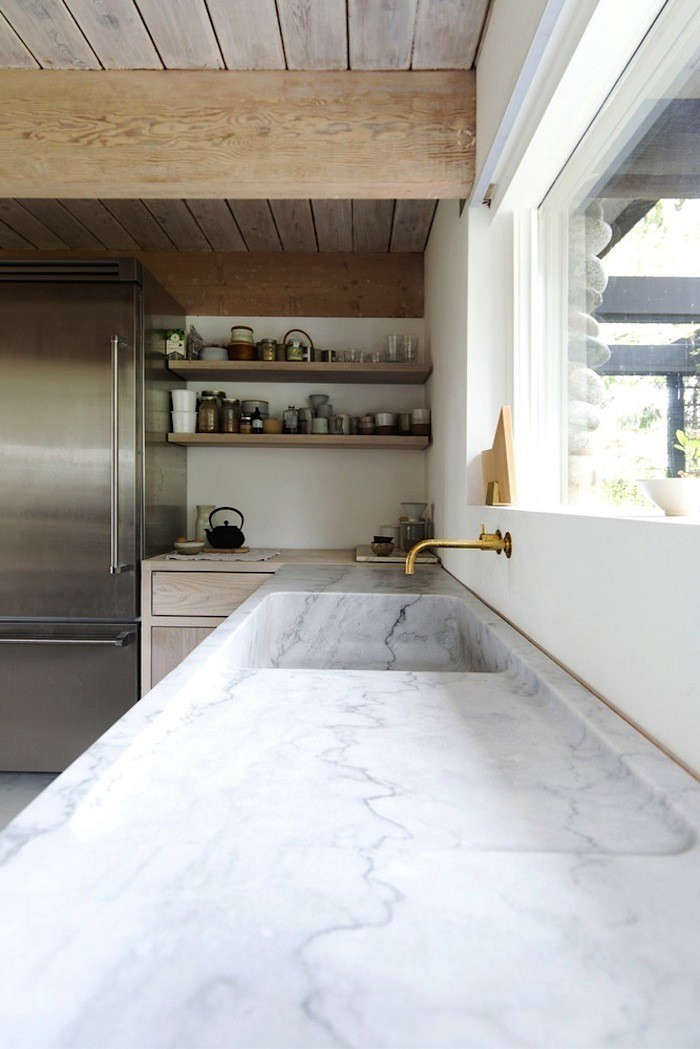 Above: The marble came from Hisnet Inlet quarry on Vancouver Island, near the the Scotts’ own alpine cabin. 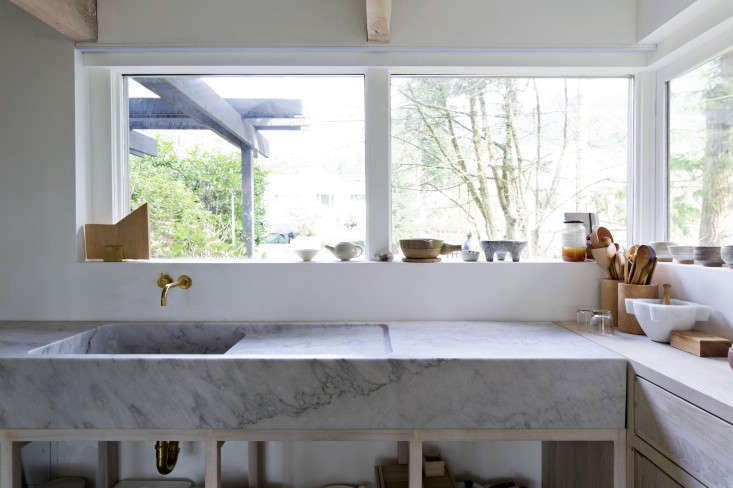 Above: The counter weighs 800 kilos (approximately 1,763 pounds); its ash base may look light but was designed to structurally bear all that weight. 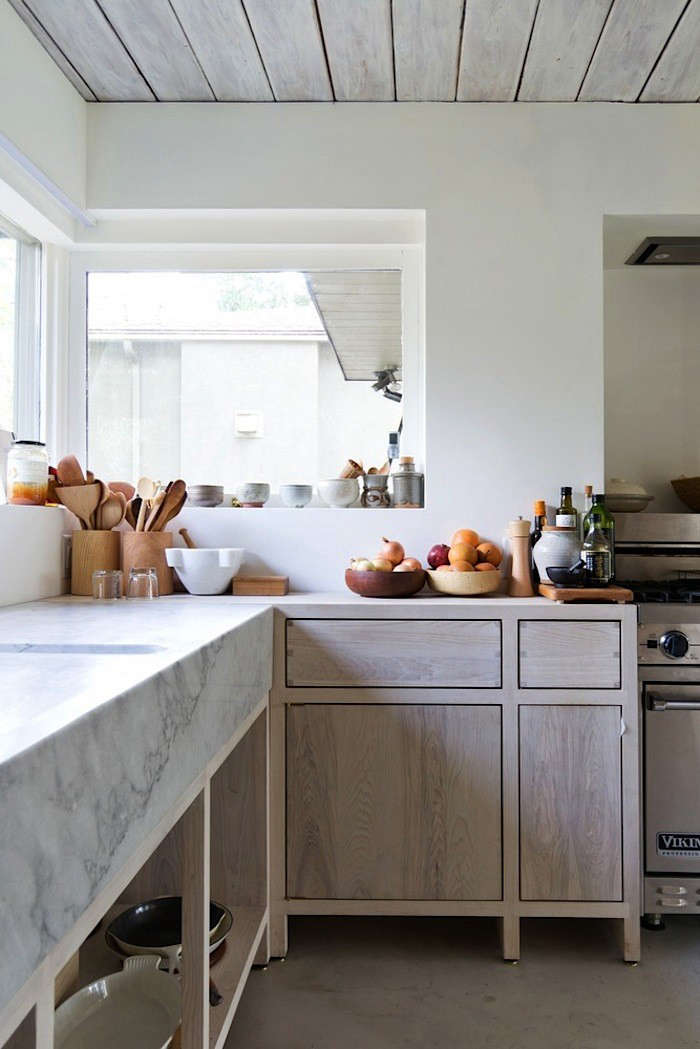 Above: The under-the-counter joinery cabinets. 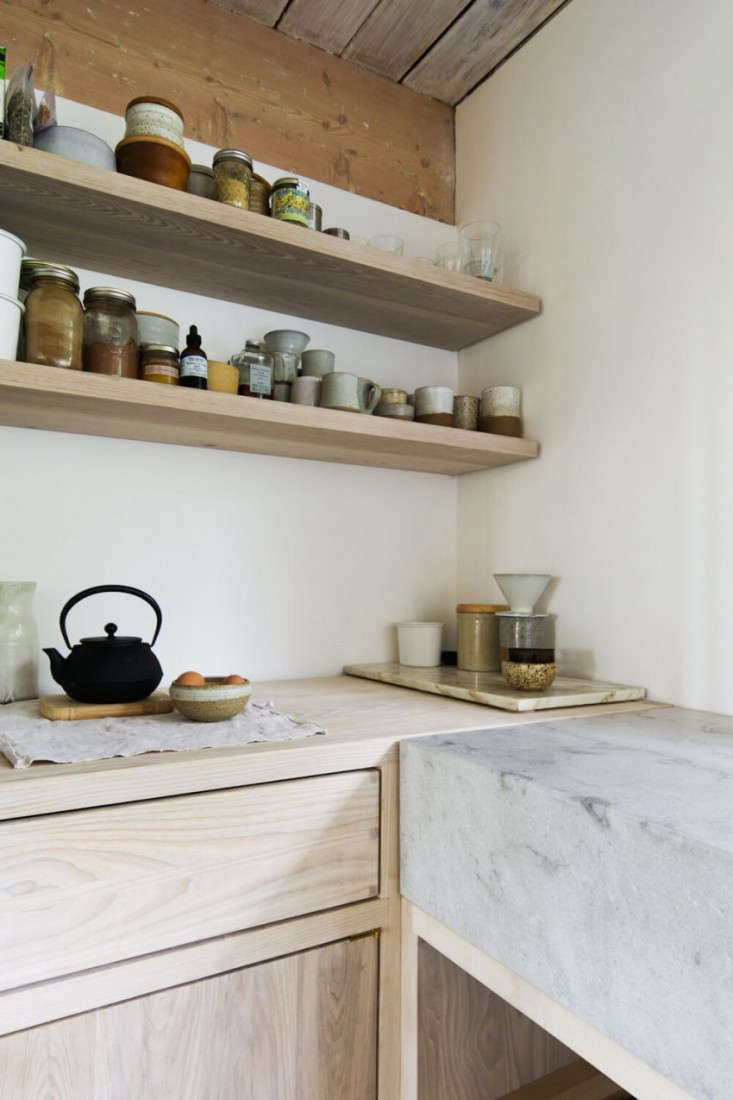 Above: Along with kitchen essentials, the open shelves display the owners’ collection of studio pottery. 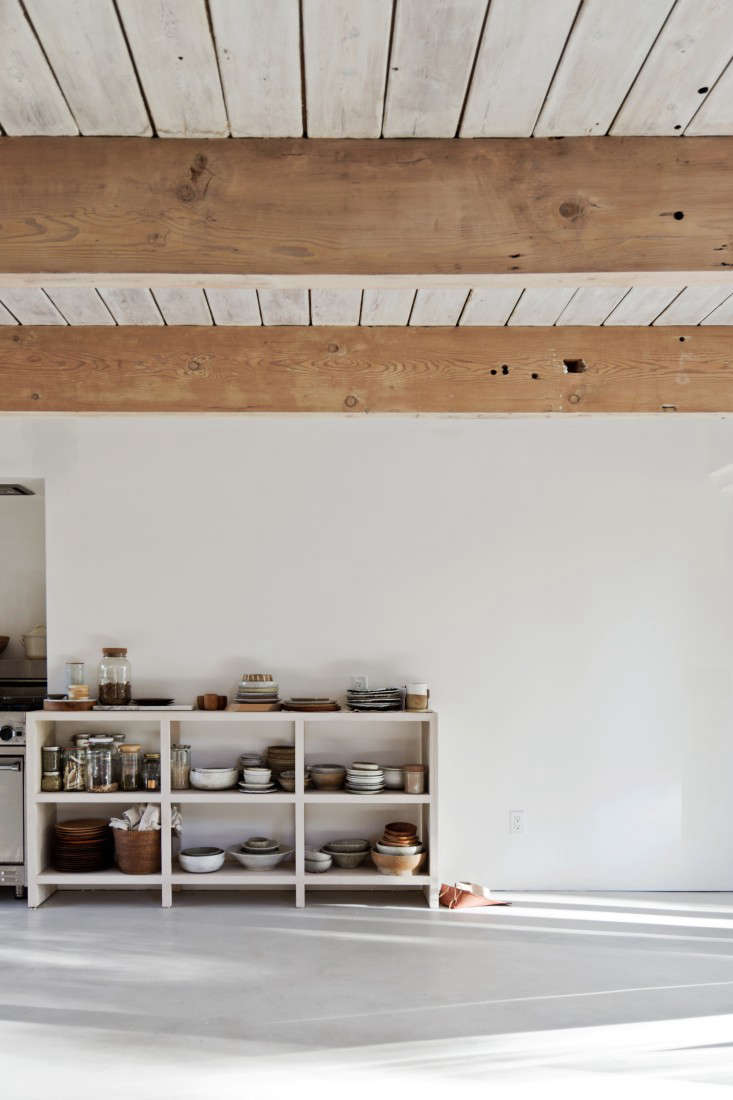 Above: The shelves extend out to a mudroom area at the entrance, lit by a wall of windows. 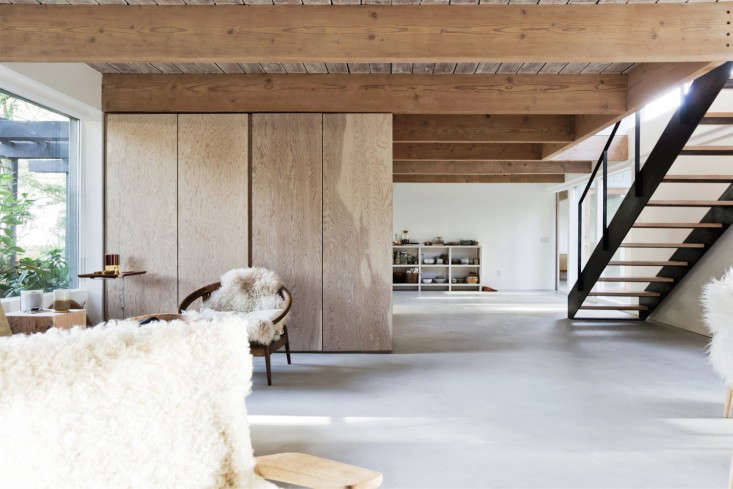 Above: The cabinets are made of locally milled Douglas fir plywood; they section off what had been an enclosed kitchen. Throughout the house the existing lighting was replaced with strip lights flush with the wall faces. 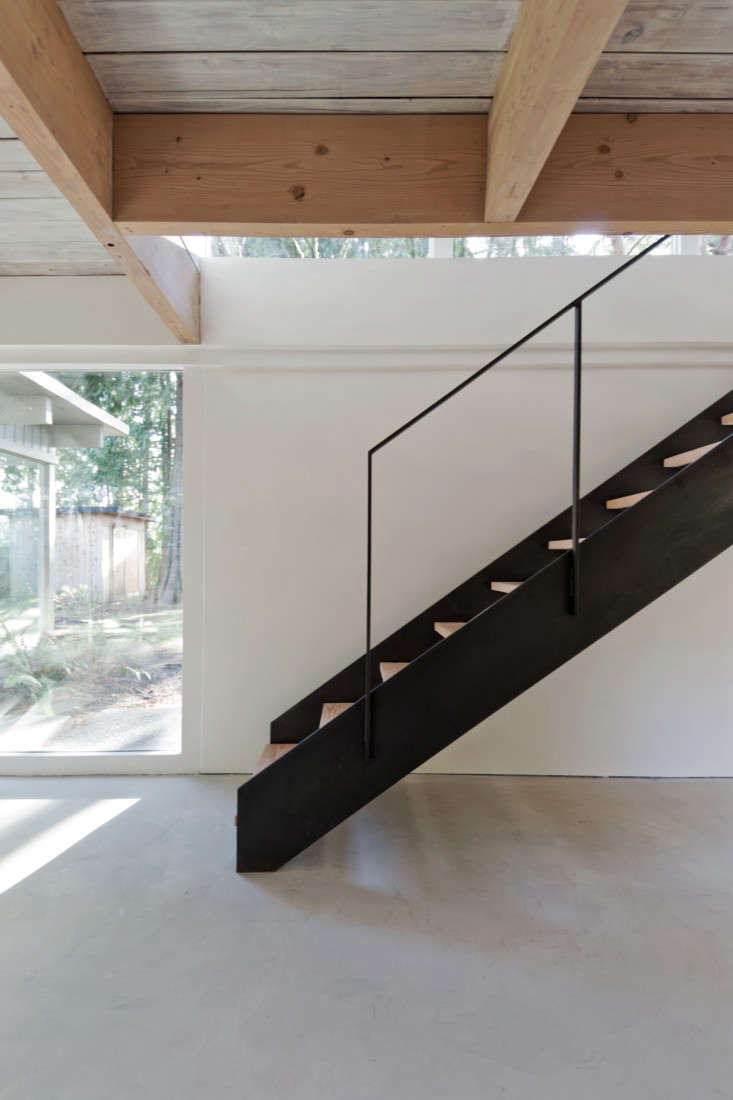 Above: The architects replaced a closed-off stair with a new open steel design with fir treads. Like the steel fireplace surround, it’s finished with woodstove paste and bowling alley wax. 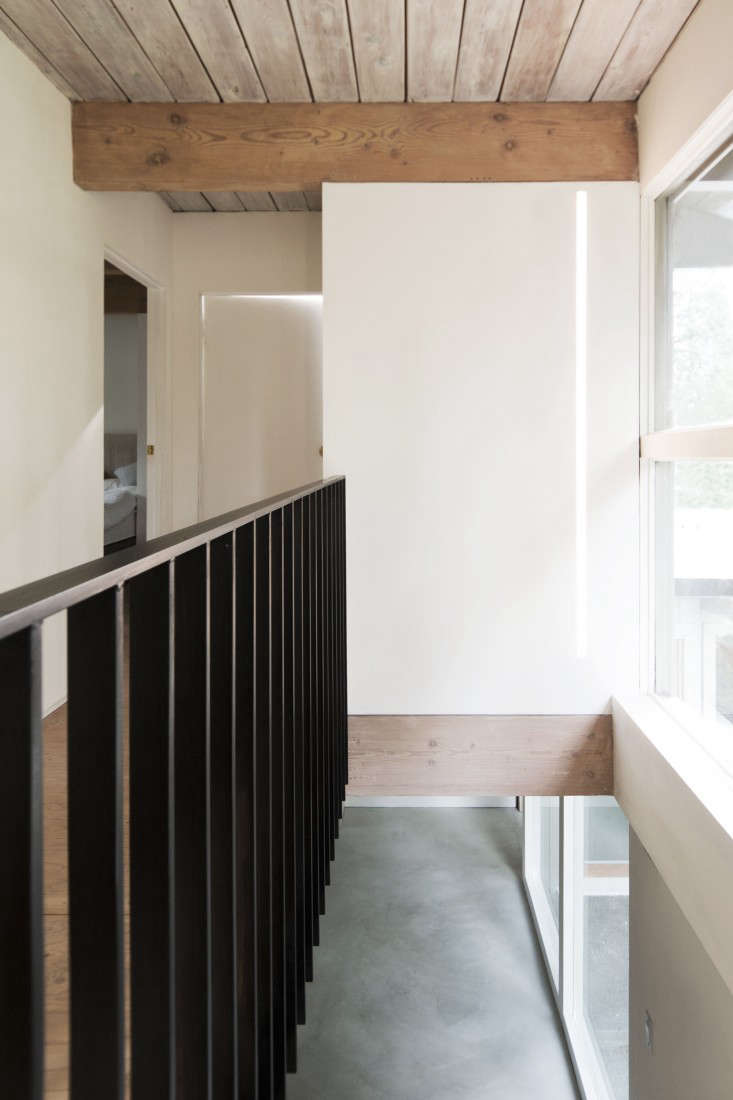 Above: The second-floor landing is newly open to the first floor and filled with light. 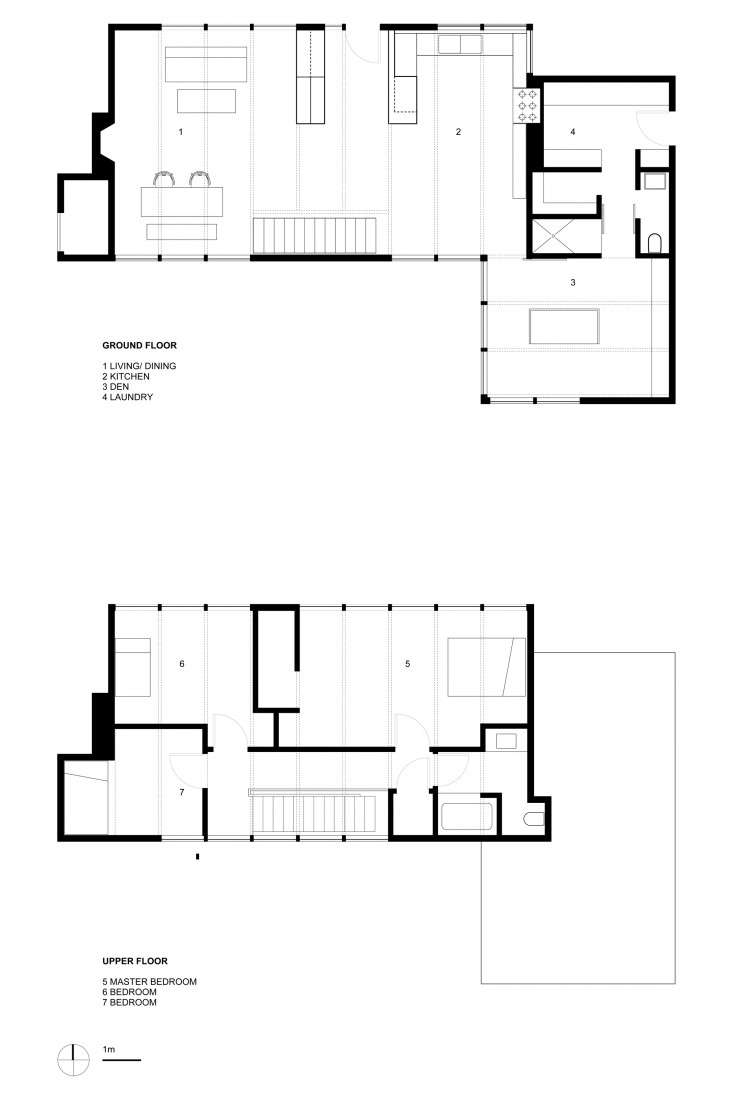 Above: The architects preserved the house’s general setup while bringing it into the 21st century. As David Scott explains, “Many of the finishes were quite dark and the details of the stair, entry, and kitchen were cellular and not allowing for the degree of light and spatial continuity that was possible.”

Gift Guide 2015: For the Cocktail Connoisseur