I’m not ashamed to admit it: I married for taste. After growing up in a family that valued efficiency and a lack of vanity over all other attributes, I fell for a guy with strong, positive opinions about indirect lighting and designer furniture. His father, Roland Belhumeur, a painter and dean of fine arts at the Rhode Island School of Design, had filled their home with his no-holds-barred work and alluringly idiosyncratic collections of decorative art. His mother, a photographer and textile designer, was renowned for her elaborate dinner parties and had no qualms about discussing place settings and party wear at length. I was in heaven.

Last year, my husband and I moved from a duplex in a 19th-century townhouse in Manhattan to a prewar rental building in San Francisco, along with two teens, every piece of furniture we’d amassed, and a significant number of paintings, mostly my father-in-law’s. In the end, it was the art that made the move a success. I now think of our collection as the bulky equivalent of a nomad’s rugs–wherever we hang it, we’re home. 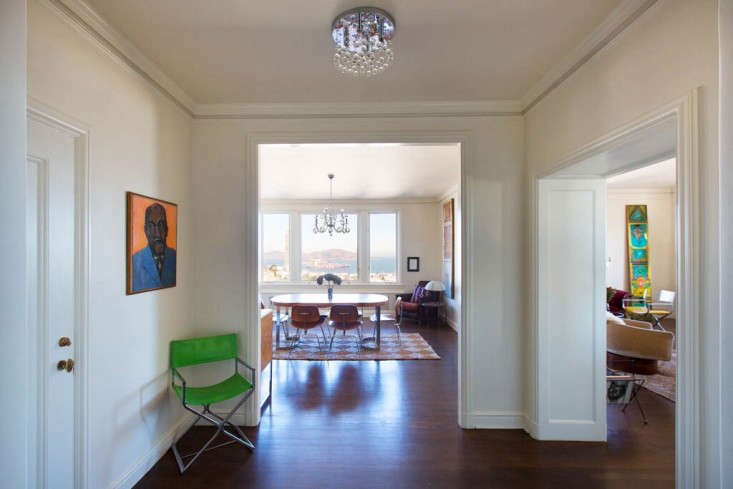 Above: To the casual viewer–OK, any viewer, really–the apartment is not about the art so much as the killer views of San Francisco Bay that smack you in the face the minute you enter the door. Even the unfortunate hallway ceiling fixture left by the previous tenant can’t detract from the Bay’s glory. 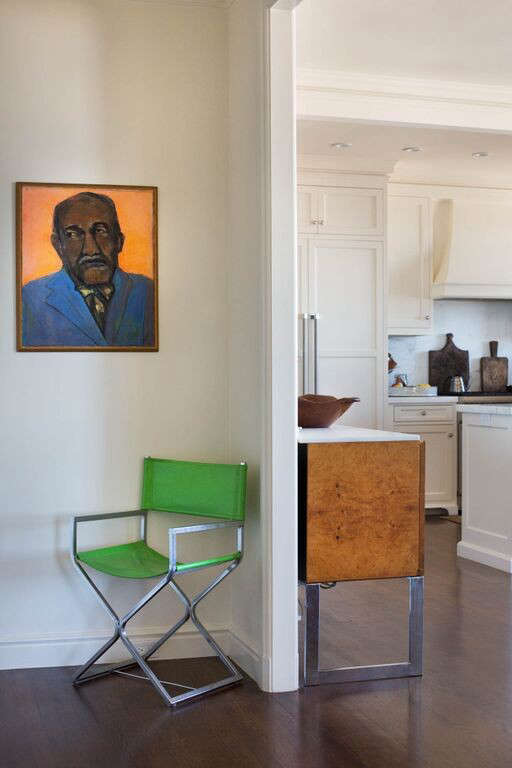 Above: After you’ve recovered from the natural grandeur, the manmade elements start to emerge. In a corner of the hallway, the bold palette of this untitled portrait by my father-in-law stands up to the acid green vinyl of a Milo Baughman side chair from a local consignment shop, The painting coordinates nicely with the olive burl Milo Baughman credenza bought on eBay, on the kitchen and dining room side of the wall. 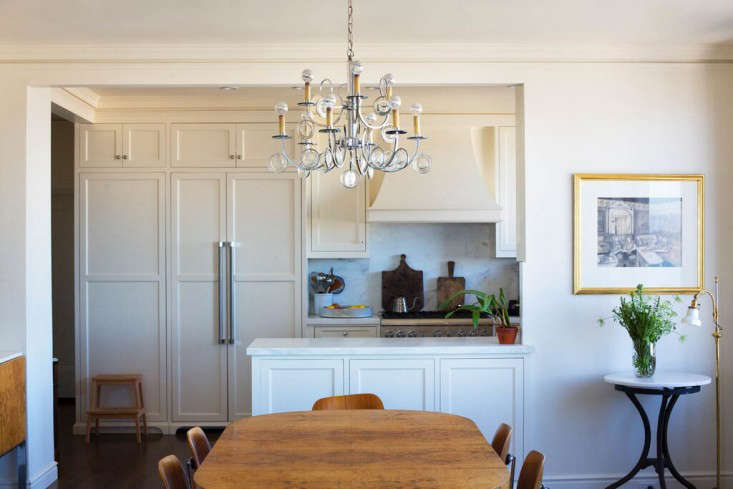 Above: My husband found this Scolari chandelier at a West Village jewelry store, now deceased. The olive burl dining room table is another Milo Baughman piece, also from eBay. The bentwood wine rack is a present from my brother-in-law, an even more advanced eBay shopper than we are. The glass, chrome, and wood all play nicely with the open kitchen, part of a terrific remodel done by Michelle Pfeiffer (that white gold), who used the apartment as a pied-í -terre in the early 2000s. 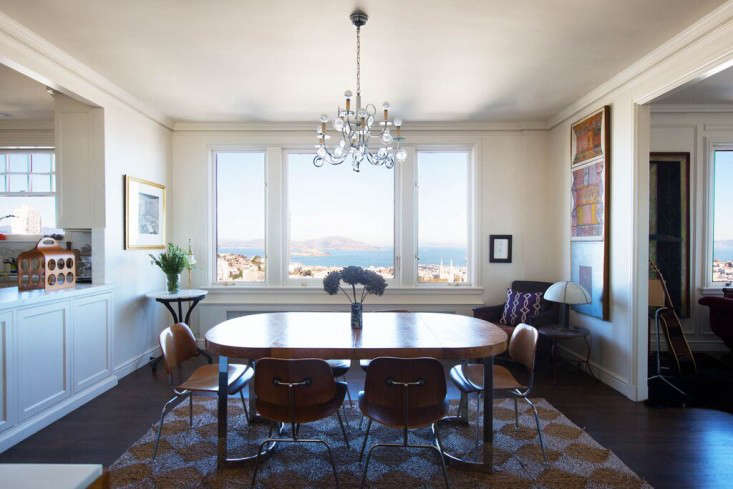 Above: A drawing of a Roman tea room (left) and an abstract painting (right), both by my father-in-law, flank the dining room, the latter piece echoed by a purple chainstich pillow by Judy Ross. Tying things together is a Sea Grass Rug (the 8-by-10-foot-size is $49.98 from World Market), a super low-cost, easy maintenance strategy borrowed from the fisherman’s shack we rent on Martha’s Vineyard. 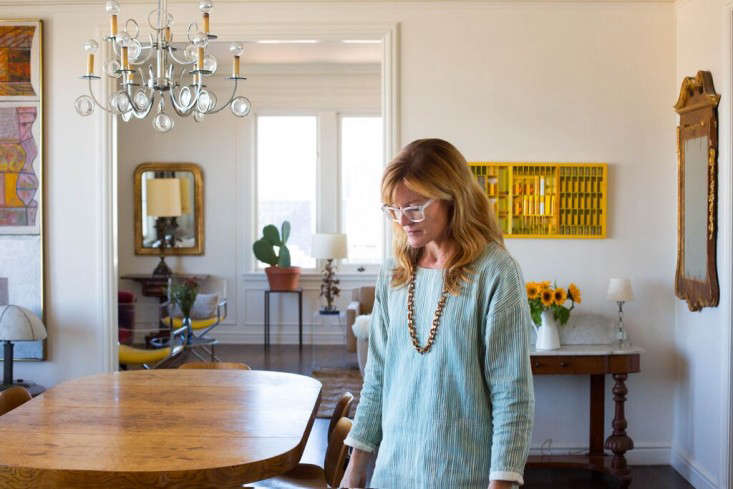 Above: My father, a practical Midwestern man, recently whispered to my teenaged daughter that it was sad that I’d been reduced to wearing flour bags. But I’m loving tunics, which, Dad, are nothing if not practical. This dress, which I picked up at the legendary local forward-thinking clothing dispensary MAC, was designed by San Francisco design collective Gravel & Gold. My beloved brass chain necklace is from the Claire Vivier boutique in NYC (similar pieces for $250 are at Heath, designed by Kirsten Muenster). 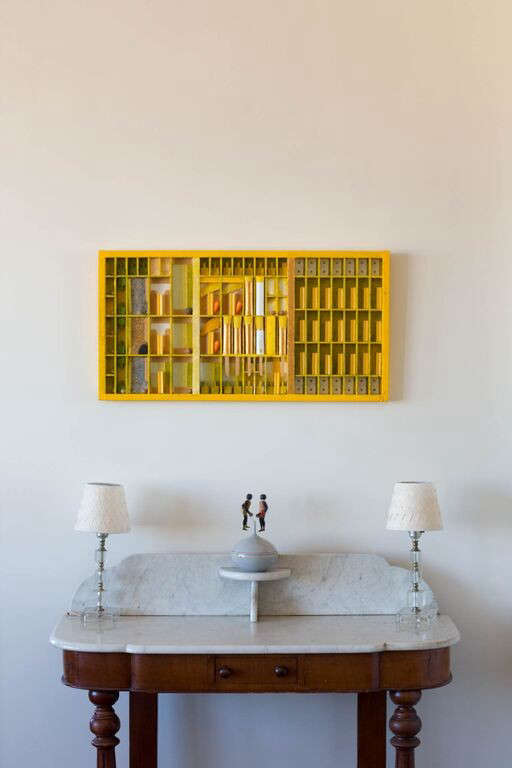 Above: As my father-in-law lost his eyesight to glaucoma, he began assembling three-dimensional collages that fell somewhere between Joseph Cornell’s boxes and Braque’s still lifes, if you’re asking me. This daffodil-yellow piece is hung above an Italian modernist vase adorned with a luchador toy atop a 19th-century commode, all from my father-in-law’s collections. 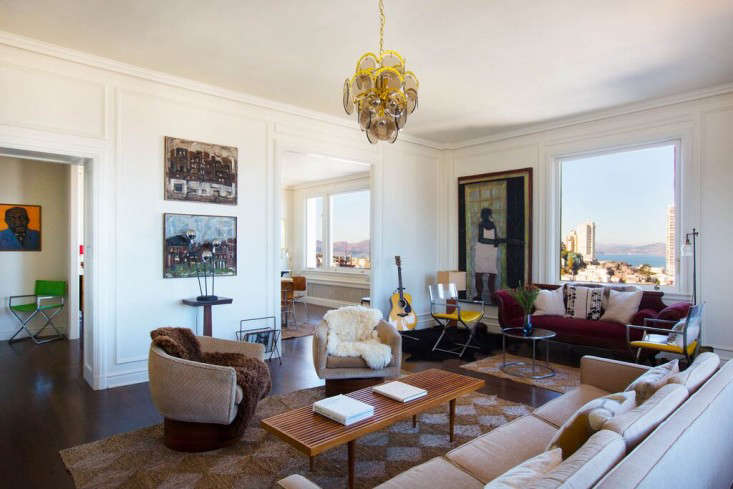 Above: Two of my father-in-law’s landscapes from his time in art school (he would have been mortified) are dwarfed by a monumental work from the 1960s in the corner. My husband just found (and rewired and hung) the Gino Vistosi light fixture from the Mission District’s wonderful vintage and California-made decor store Schatzi. The fixture’s 1970s glow splits the difference between tacky and gorgeous, as do the Milo Baughman swivel chairs (eBay), covered in sheepskin from the livestock farm we once had in northwestern Connecticut (long story). 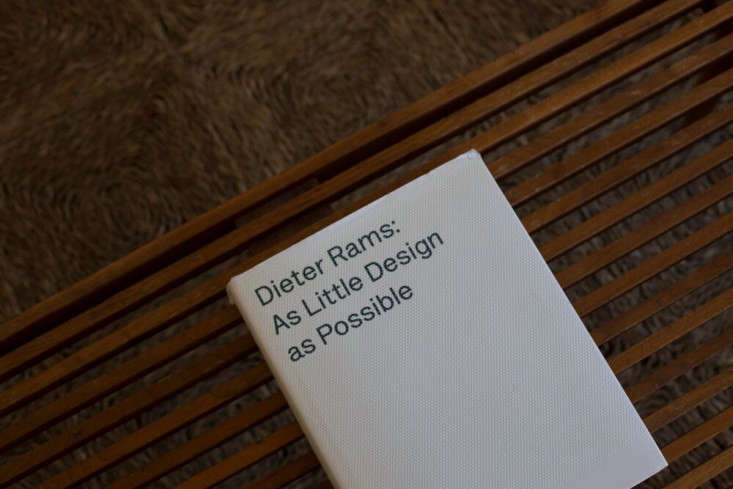 Above: My son has inherited his paternal family’s interest in good design. He bought this book on Dieter Rams, the man behind Braun who inspired much of Apple’s design, and kindly left it behind when he went to college. 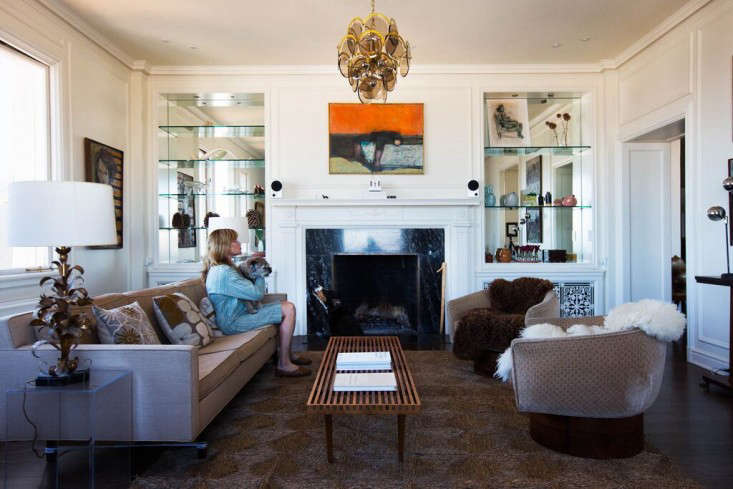 Above: My father-in-law never said whether my absolute favorite painting, now hanging over the fireplace, was of a man lying back, his feet on the floor, or a man whose torso and head had been obliterated. All I know is it was part of a set including a woman identified as a lady of the night. In any event, the painting’s strong colors help draw the eye away from the dogs who are always sacked out, against house rules, on the midcentury couch (from Regeneration in NYC). 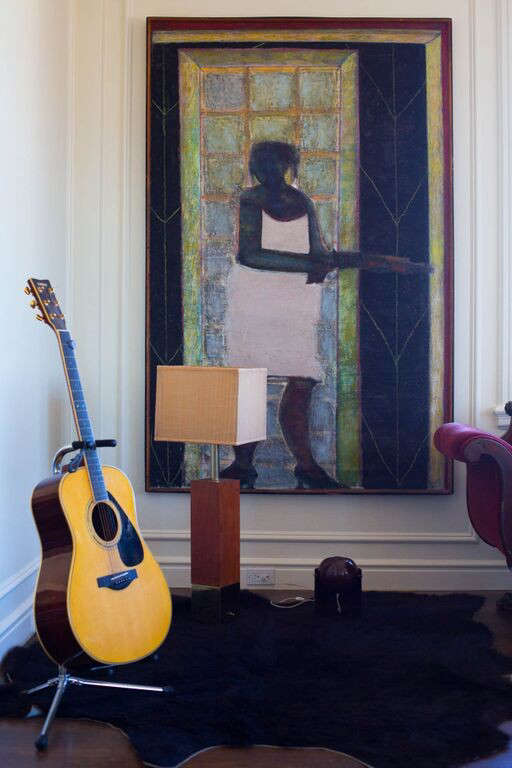 Above: My father-in-law taught at a largely white art school in Louisiana during the civil rights movement. I would have loved to have seen how this piece was received at the faculty art show. My son’s guitar serves more as sculpture than instrument these days. 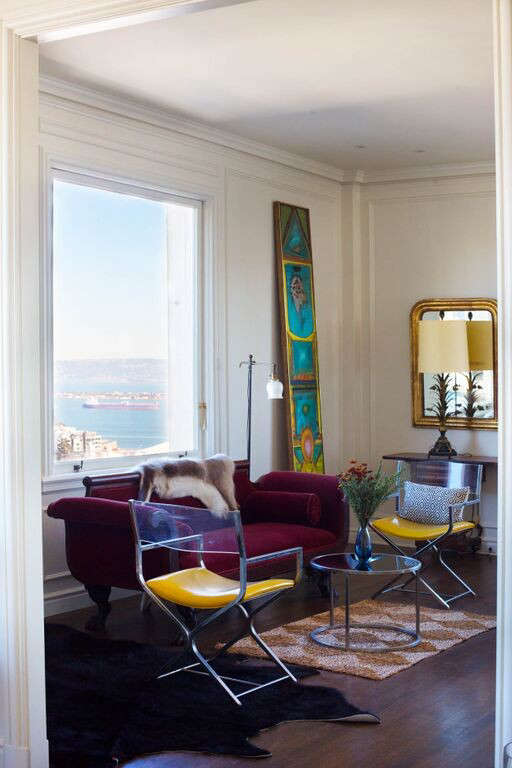 Above: We have one piece of a 1970s triptych leaning in the corner of the living room. Its acid trip vibe coordinates nicely with the kaleidoscopic fog, cloud, and light show every day over the Bay. I’ve taken to saying that there’s no graphic element from in and around the Summer of Love that doesn’t happen naturally in the sky here. The yellow vinyl and lucite Milo Baughman chairs are from New York’s much-missed Chelsea flea market. 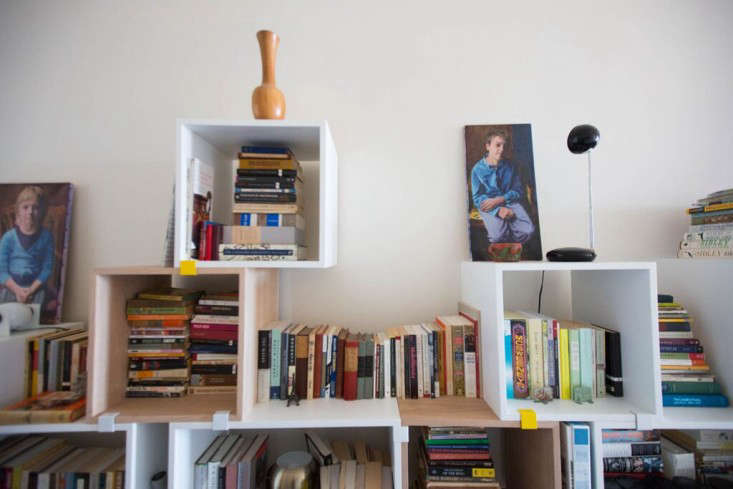 Above: My husband and I both spent year and years in graduate school and collected a lot of books in the process. We’ve shed hundreds of volumes since then, but the books we can’t part with still pose storage challenges. (Full disclosure: After the move, I was ready to ditch them, too, but read a post in Gardenista that changed my mind.) After a few false starts, including buying shelves that were too big to fit into the building’s freight elevator, we invested in a playful, modular Stacked Shelving System from Design Within Reach ($766 for a set of four boxes with colored clips). At the shelves’ northern borders, portraits of our daughter at 7 and son at 10, by Paris-based painter Mae MacKenzie, lit by a Tensor eyeball desk lamp from eBay, squares off against a birdseye maple vase picked up while scouting Seattle’s Frye Museum store. 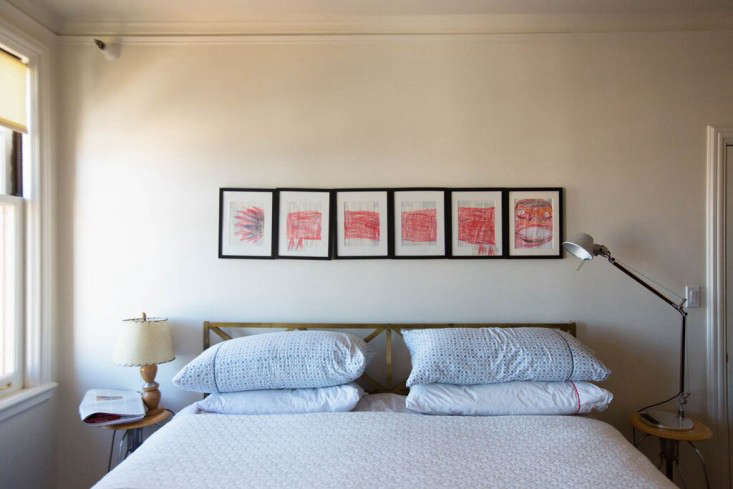 Above: I buy John Robshaw sheets whenever I see them even slightly on sale–and justify the expense by using a neutral Ikea coverlet (Alina; $69.99). My husband has a schmancy Tolomeo lamp ($400 at DWR) and I have something we picked up at a flea market decades ago. Over the bed is a Chinese dragon my daughter, then 7, created with crayon, typing paper, and cellophane tape, painstakingly split up and preserved in Ikea frames (Gunnabo; $7.99 each) by my husband. We’ve all taken turns as the resident artist–but it’s Roland’s work that will always be the heart of the family fortune. 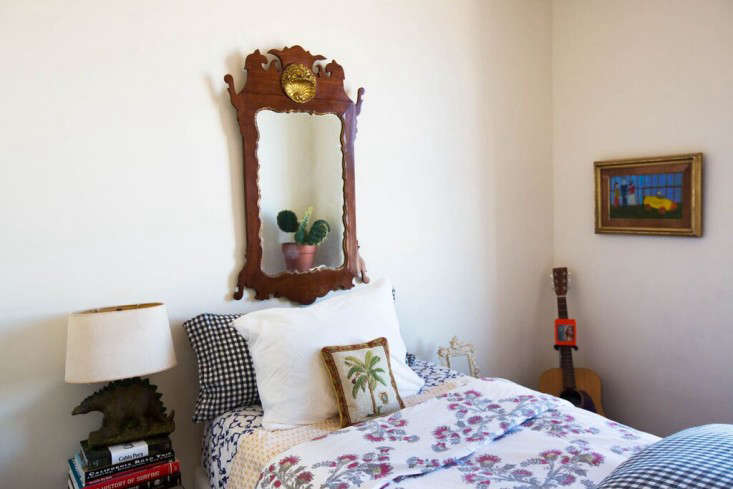 Above: Our son’s room, purged for guests, now gets its share of John Robshaw sheets. 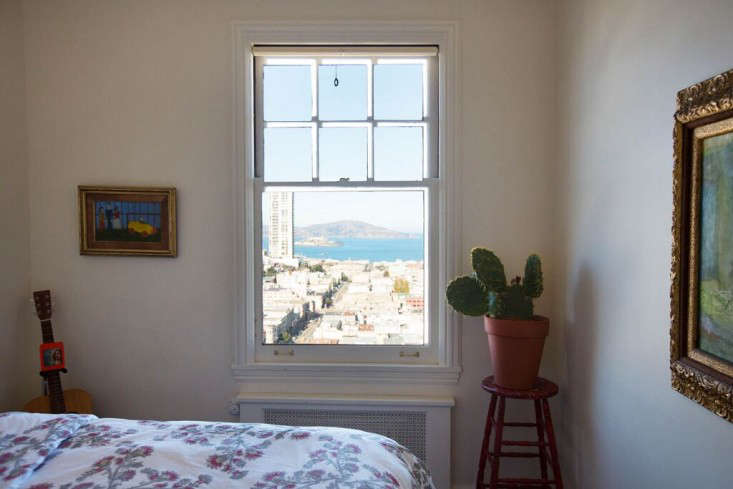 Above: A view from the guest room of Angel Island – and one of the few towers between us and the Bay. The Dr. Seuss-style cactus is from Berkeley’s Cactus Jungle.

See another spectacular SF aerie at A Home at the Top of the World, San Francisco Edition.

$285.00 USD from Design Within Reach
Furniture

Table of Contents: The Artist's House

Steal This Look: A Color-Drenched Bath in Somerset