About four years ago, I happened upon the blog Metrode and I remember being first drawn to the subtly Scandinavian aesthetic of the mystery person behind it. That was during a time in the blogosphere when you would comb through someone’s personal musing and inspirations, piecing their personality together as you saw it, a time before everyone was readily available on social media.

Caitlin Emeritz, the artist behind Metrode, began her blog as an outlet for her Etsy vintage store. “The first digital photo I ever took was for Metrode,” she remembers. “I started selling vintage on Etsy because I couldn’t find a job; that project evolved, and eventually I was making my own things.” Caitlin has never been big on social networking–she’s a self-proclaimed “creative weirdo” who is part of a network of the same across Seattle. These days, she’s also a weaver, and Metrode is now devoted to her wall hangings.

Her minimalist, color-blocked weavings are often in shades of white–not unlike the rooms in the Capitol Hill townhouse where she and her husband, Michael, live. The two rented the modest house for two years before their landlord offered it for sale. The experience of transitioning from renter to owner gave them the opportunity to actually make the tweaks and renovations they had been dreaming of. Their results are a study in how to live minimally on three small floors, each 400 square feet. 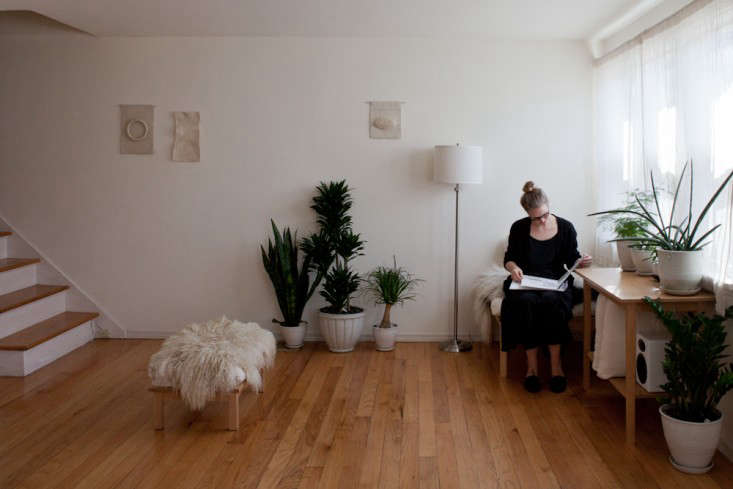 Above: Caitlin sits in the living room–the main floor of the house–with a trio of her weavings hanging behind her. To make up for the structure’s lack of architectural detail and flow, the couple keep the decor simple. They stripped down the popcorn ceilings, painted the room white, and keep the furnishings spare: a sheepskin-covered bench, floor lamp, desk and chair, and white-potted house plants. 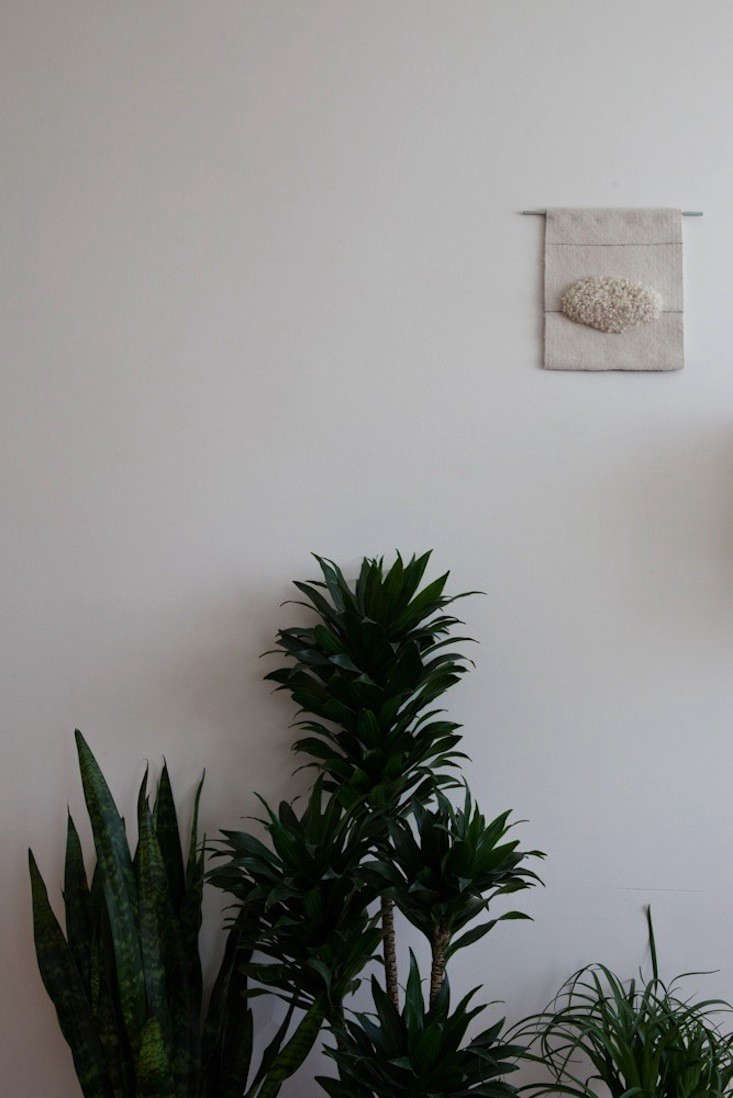 Above: Caitlin’s weavings are available online through Anaí¯se, and can often also be found at Rennes and Ioneta. 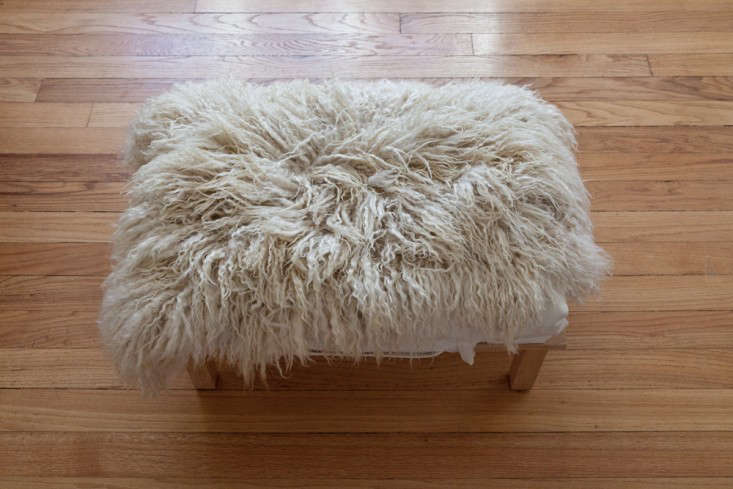 Above: Caitlin is a sheepskin connoisseur. She sources most of hers from farms that sell them as byproducts of the meat industry. A favorite source is Nistock Farms, located in the Finger Lakes region of Western New York. “I also recently found a woman who sells beautiful angora goat pelts; her shop on Etsy is called Liongate Farm,” she tells us. “But the very best place to buy sheep and goat pelts is in person at a fiber festival, directly from the farmer.” 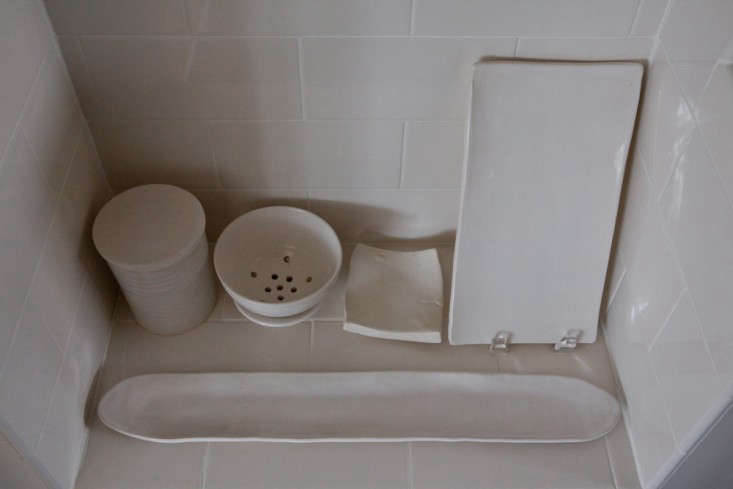 Above: “The kitchen was so bad when we first moved in here–the whole house, you could just tell that no one had ever cared about it,” says Caitlin. “To start we had to bash a big hole in the wall.” The finished results in the kitchen include this tiled wall niche used to display a collection of white-glazed ceramics. 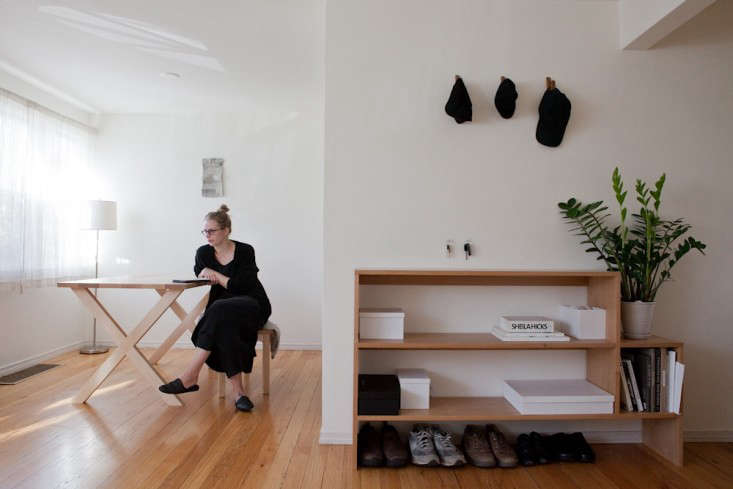 Above: Caitlin designed their X-base dining table and other pieces in collaboration with a woodworker friend, Joel Kikuchi (who also made much of the office furniture for the nearby shop Totokaelo). 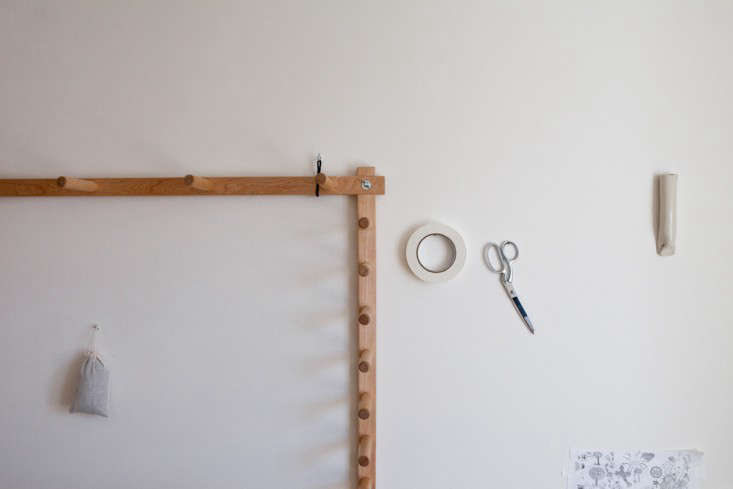 Above: Essential tools and supplies hang within reach in the small second floor studio where Caitlin does most of her work. 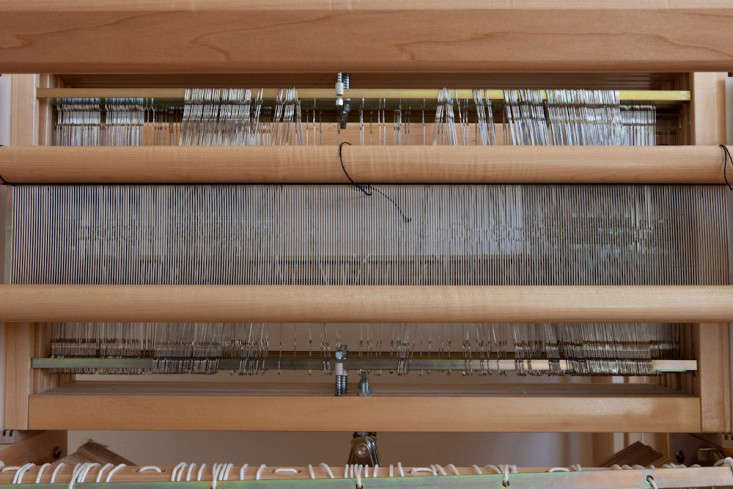 Above: Caitlin selected her loom, a Canadian-made Le Clerc Floor Loom, in part, because it’s proportional to the size of her studio. 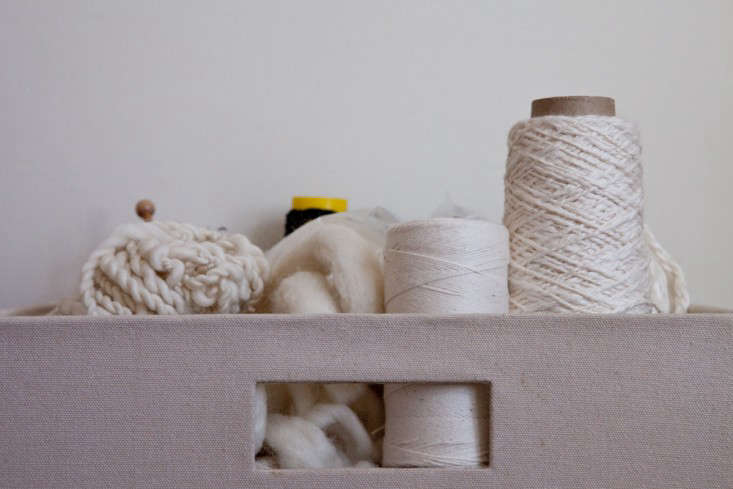 Above: Work materials in a linen-covered box. 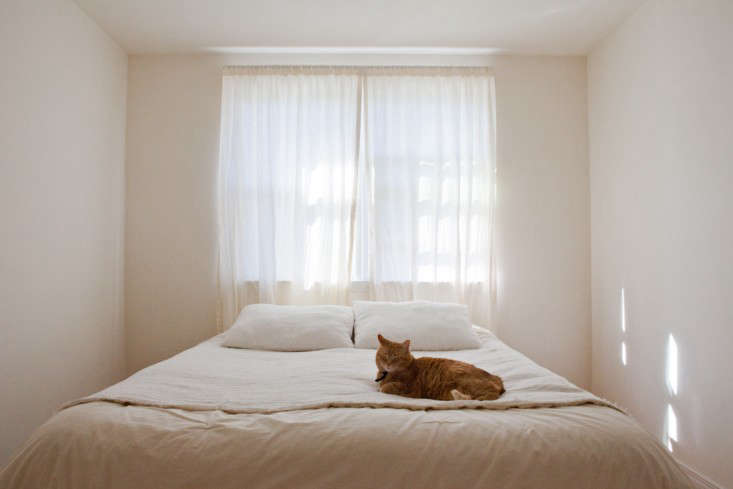 Above: “I got the idea from Martha Stewart to really value your bed,” says Caitlin. The couple’s mattress is layered natural latex and wool with a two-inch wool topper and came from Soaring Heart in Seattle: “Soaring Heart is not like retail at all; it feels like therapy. Like they are really trying to change people’s lives by giving them a better bed, or at least they have me convinced.” The sheets and covers are by a group of small-scale Etsy sellers who Caitlin follows: Nikki Designs, AVISA Fabrics, Shabby Wool Jane, Kelly Green, and Vilenda Linen. 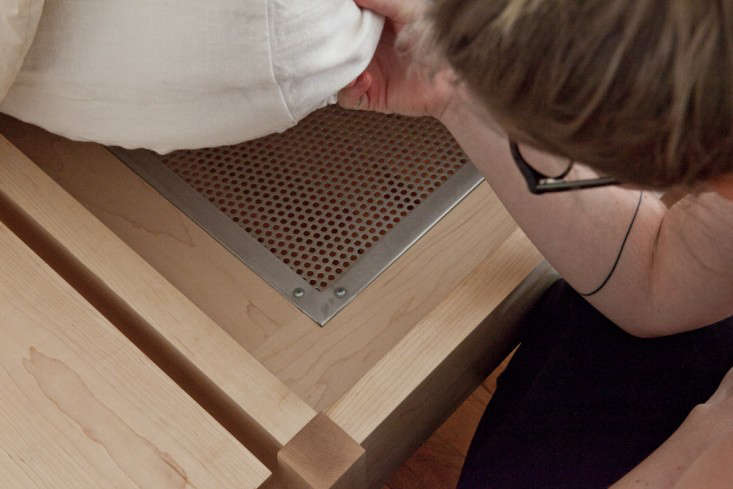 Above: The bed frame was made by Joel: “He came up with the idea of using two panels of perforated metal on the base. It made the project more interesting for Joel–he wanted to use less conventional materials–and the perforated metal makes for breathability below the mattress.” 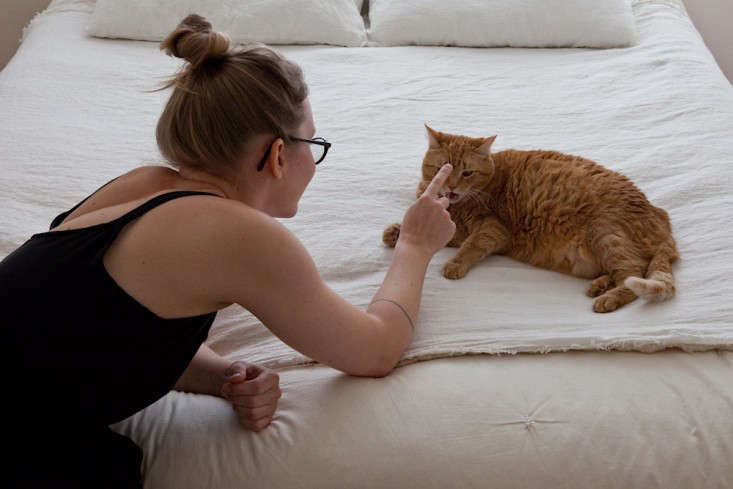 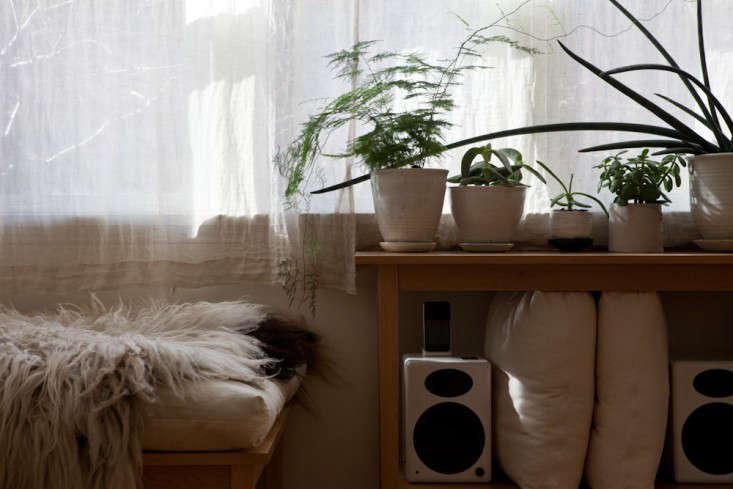 Above: The curtains throughout the house are made of European linen sourced from sellers on Etsy (some of whom are noted above). 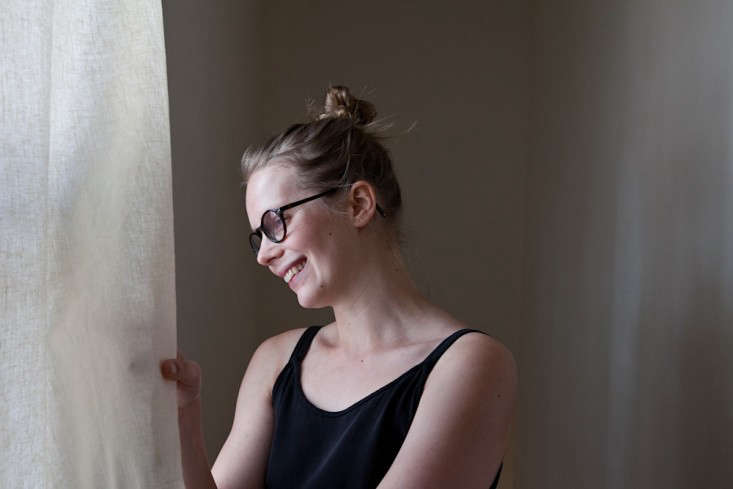 Above: Go to Metrode to see more of Caitlin’s work.

Visit another weaver’s studio in our recent post Farm-to-Table Textiles from Voices of Industry, and take a tour of the famous Egan House in Seattle in Living in an Architectural Landmark, Seattle Edition. On Gardenista, tour An Artist’s Verdant Atelier in Paris.

Required Reading: Lunch at the Shop by Peter Miller