Six years ago, when we first me up with Hopie and Lily Stockman, the two sisters were just back from Bagru, India, with some of the first block-printed scarves that gave their business its name: see Block Shop’s Wearable Paintings. Patterned in bold geometrics with a neo-hippie vibe, the scarves were shawl sized, and someone early on discovered that they make perfect wall hangings. Soon all of hipster LA seemed to be blanketed in Hopie and Lily’s designs.

The two went on to expand Block Shop’s offerings to woodblock art prints, rugs, table linens, and more, all in bright, linear patterns that they say are inspired by Indian architecture, women of the Bauhaus, and Sonia Delaunay’s painted sets, among other things. But it wasn’t just some catchy prints that helped Block Shop flourish: both sisters are artists, and with a goal of “learning the building blocks of running a socially responsible business,” Hopie earned her MBA from Harvard (where Lily studied painting—it was Lily’s year spent in Jaipur that introduced them to the textile collective they’ve been working with ever since). They’re both now based in LA, where, after outgrowing their initial DTLA cubicle, they’ve set up headquarters in a converted train yard warehouse in Atwater Village that rattles every time a train runs by. Join us for a tour of their setup.

“We started Block Shop with $5,000 when we were grad students, and we’ve sought to grow thoughtfully and deliberately,” says Hopie. “We believe in small-scale production, fair wages for workers, and healthy working conditions. We invest 5 percent of our annual profits in health and empowerment programs in Jaipur.”

Block Shop’s signature cotton Scarves are shown here flanked by their wool and cotton Rugs, woven by a family of master weavers outside of Jaipur. Three of Block Shop’s Woodblock Paper Prints hang overhead. (The company is currently donating 10 percent of all scarf and bandana sales to the LA Regional Food Back and LA United Way.)

The pale celadon on the wall is Cooking Apple Green; the rest of the space is in All White, both by Farrow & Ball.

The daybeds—in white by Waka Waka (who also made the armchairs) and in peach by L.O.C. Architects—showcase Block Shop’s forthcoming upholstery fabrics. The coffee table is by Jake Rodehuth-Harrison of their favorite interior design firm, ETC.etera: “the stepped legs are adjustable, and can be turned in or out.” The Purple Alien Floor Lamp is by Entler Design.

The Simon St. James pink light was “inspired by the lights on vanity mirrors from golden age Hollywood sets.” Beyond the pink curtain is the company’s warehouse and fulfillment center. 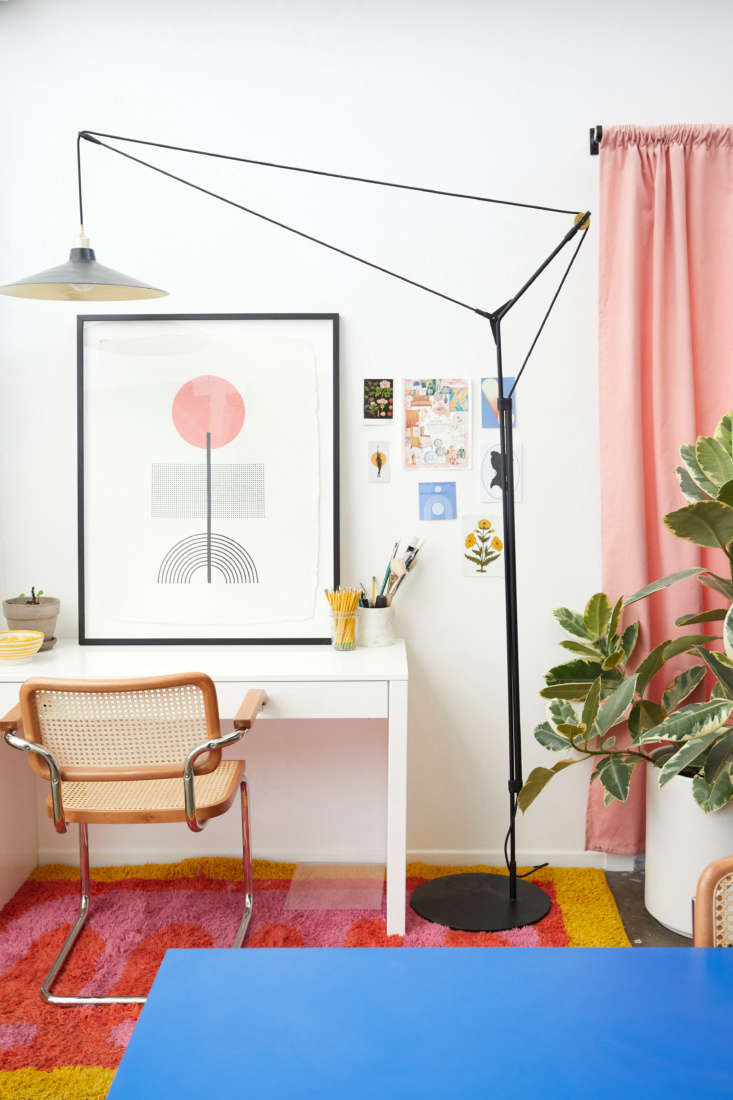 Above: Lily’s desk has a Breuer Cesca Armchair and a Brendan Ravenhill standing light. “She’s obsessive about keeping work surfaces clean,” says Hopie. “If you have a meeting with Lily, the outcome is usually better if you wipe down your desk first.” And that was pre-pandemic.

The sisters and their team are currently sheltering at home: “Like so many small businesses right now, we’re walking the tightrope of trying to keep sales coming in and cutting costs while prioritizing our staff’s well-being,” says Hopie. They’re also managing to get work done: stay tuned for Block Shop’s bedding collection next.

Designs by some more of our favorite California creatives:

Made in California: 11 Design-Worthy Wall Hooks from the Golden State