Thirty years ago, I met Calvin Tsao and Zack McKown of Tsao & McKown Architects when I went to scout and then shoot their first apartment on Central Park West for House & Garden magazine. We became fast friends fast. For the past 20 years, they’ve lived a bit further north in a duplex with similarly panoramic views of the park. Both places have been the scene of many a celebration large and small. And both have, for me, been sources of intrigue and inspiration, from deft architectural moves to the smallest curiosity. But apartments, even though they exercise the muscles that deal with confines, don’t demonstrate the full dimension of architectural thinking and practice. For that, I had to wait to see the house in Piedmont, tucked in the eastern hills of San Francisco Bay, that Calvin and Zack designed for Calvin’s parents and his three siblings and their families as a gathering place.

A single building that reads as a compound, the 2007 house reflects the bi-coastal (West coast of the U.S., east “coast” of Asia) orientation of the Tsao family. “Familial togetherness is at the core of traditional Chinese life, but we were also addressing contemporary (as in American) life,” says Calvin. “We all have our own sense of community and privacy.” So the archetypal Chinese house that accommodates different branches of a family and different generations in architectural wings and nodes, always with a courtyard at its core, mutated into a cluster of four connected buildings with a three-story volume of space serving as the central court (and dining room). At once simple and complex, the plan provides separate quarters for the parents and each of the siblings, while uniting their suites via interlocking communal spaces. The very thing that beautifully serves all members of the family, that blend of alone and together, makes it also ideal for a reunion of friends, as I discovered on a happy visit not long ago. 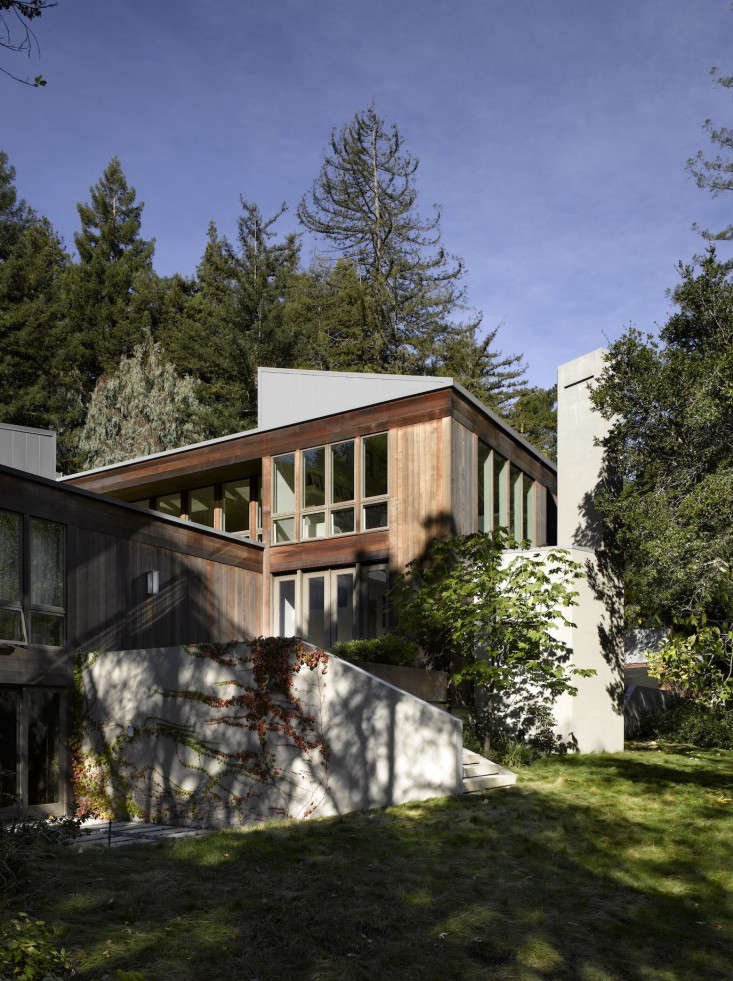 Above: Principles of feng shui guided the siting of the cedar-clad house, located in a glen just down the hill from a house Calvin’s uncle has occupied since the 1970s. Its footprint falls lightly on the ground, its orientation is toward the southeast, its positioning is parallel to a stream. 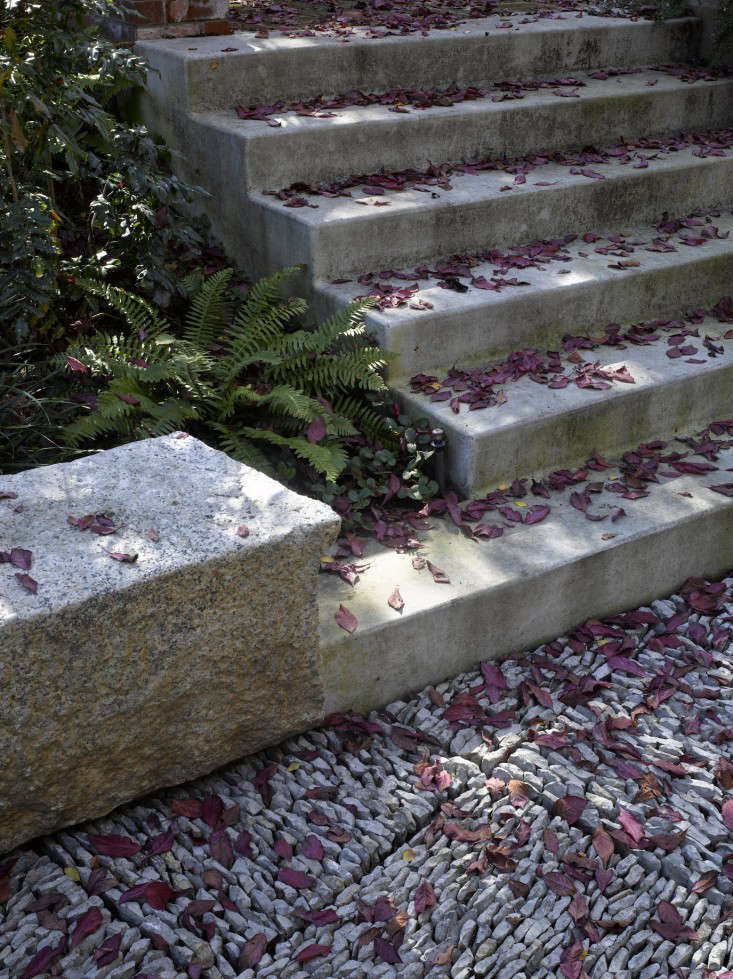 Above: Highly-textured pavers recycle small granite stones salvaged from villages lost to the Three Gorges Dam project in China. Calvin and Zack had the stones set on edge in cast concrete, then installed them in a checkerboard pattern. 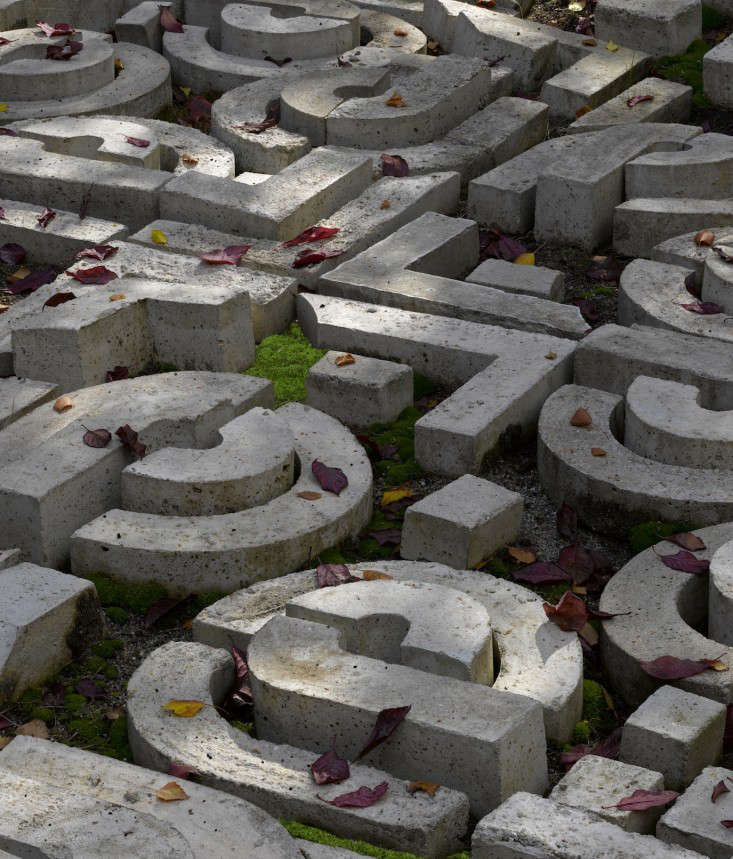 Above: What appear to be ancient Chinese artifacts in the garden are in fact the work of Rachel Miller, who studied at the Cranbrook Academy of Art (Calvin discovered her sculptures on a visit to the school for a design crit.) The cast concrete forms explode in scale the weave of a Chinese textile. 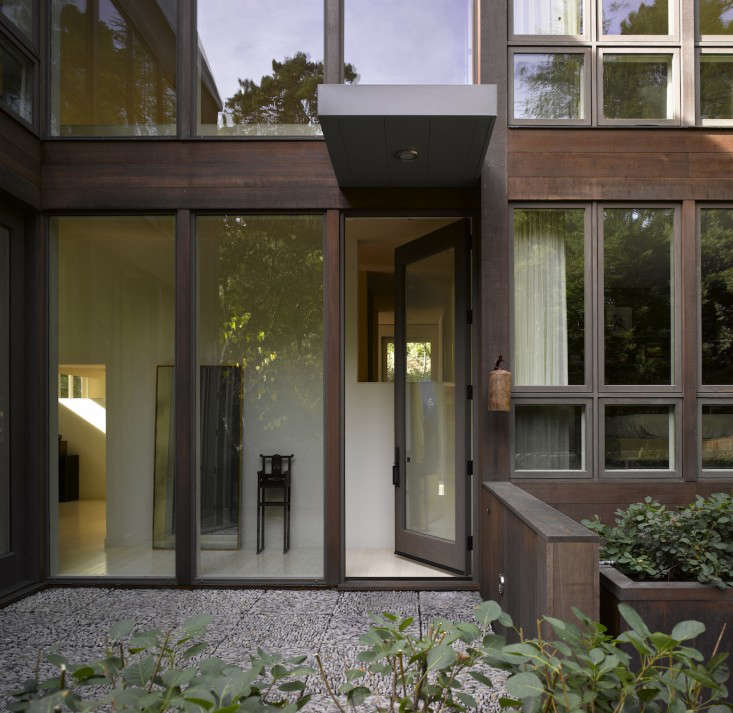 Above: Rectangular mahogany-framed windows surround one of the entries. Though it looks like an Asian antique, the old-fashioned doorbell is actually a rusty gas canister cut in half, and inside the door, what resembles a highchair is a Korean altar. 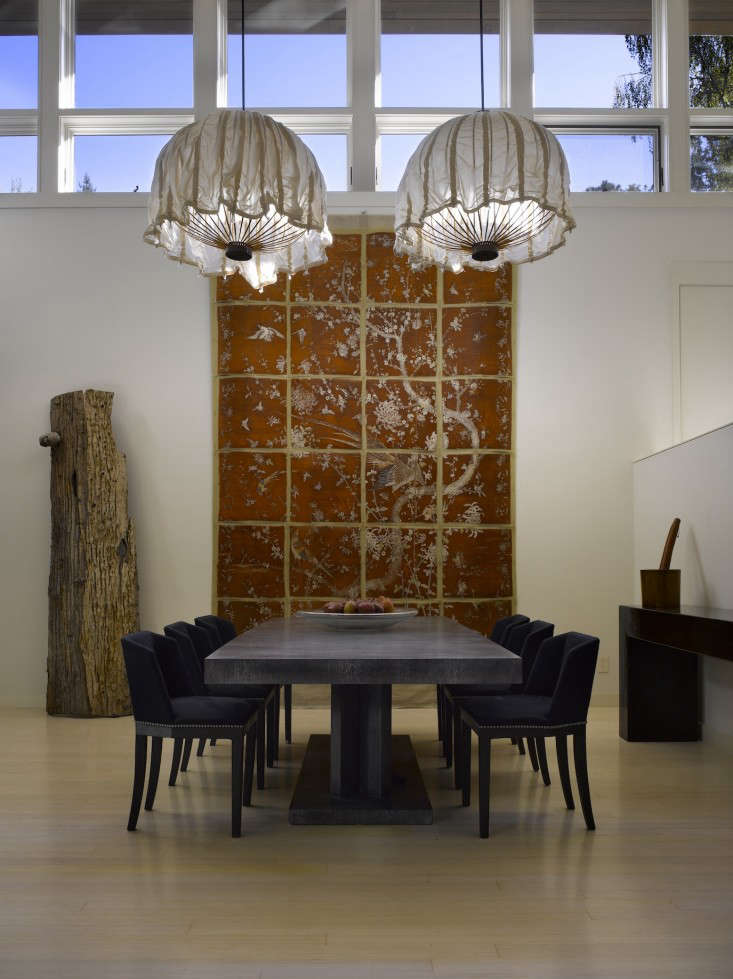 Above: The dining room is the heart of the house, an enclosed version of the courtyard at the core of a traditional Chinese house. The wall hanging features an antique Chinese bedspread “preserved” in a resin solution and is the creation of Calvin’s friend, Milanese artist Luisa Cevese. Around the cerused oak table, ebonized Deco chairs could easily be Chinese but are French. Above the table, sections of silk parachutes from World War II soften the light from the bamboo-framed fixtures. 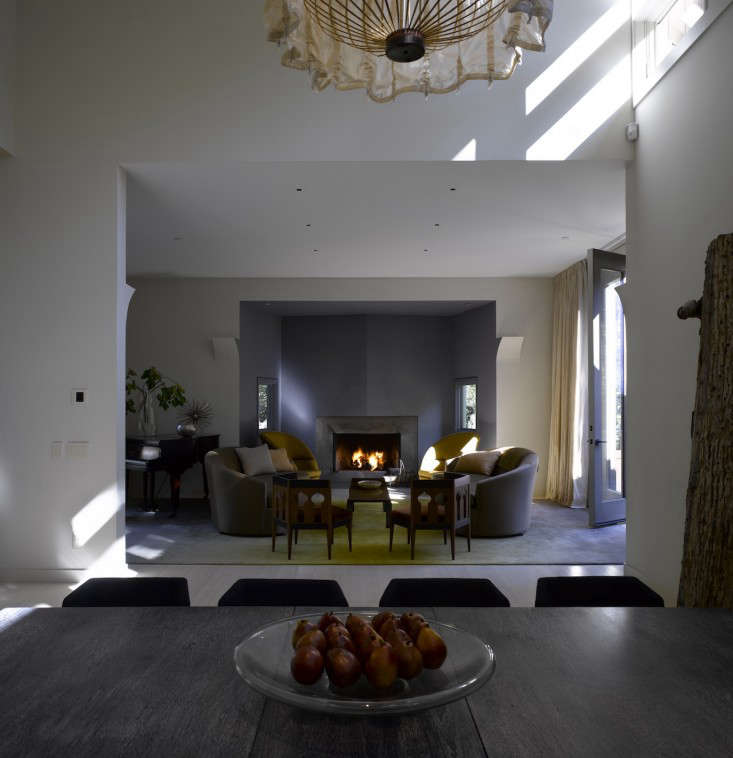 Above: Origami meets architecture in the living room’s fireplace bay, which folds out then back in. The gold chairs by the hearth are Calvin’s father’s favorite spot when he’s in residence. Flared sections of wall that emerge like capitals house uplights. Ombré is a favored motif in Chinese rugs; in the rug that Tsao & McKown designed for the living room, the warm tones in its midsection seem to extend the reach of the hearth. 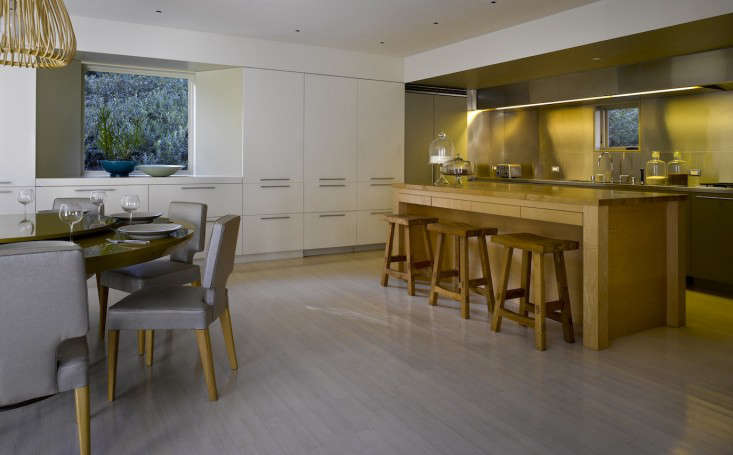 Above: An island lined with an antique Chinese stools divides the all-stainless steel kitchen from the eating area, where everyone gravitates. The round lacquered table has a generous built-in lazy susan for serving family-style meals. The chairs are a custom Tsao & McKown design. A canted niche set into a wall of cabinetry turns a window onto a planted hillside into a painting, a nod to the Chinese respect for nature. 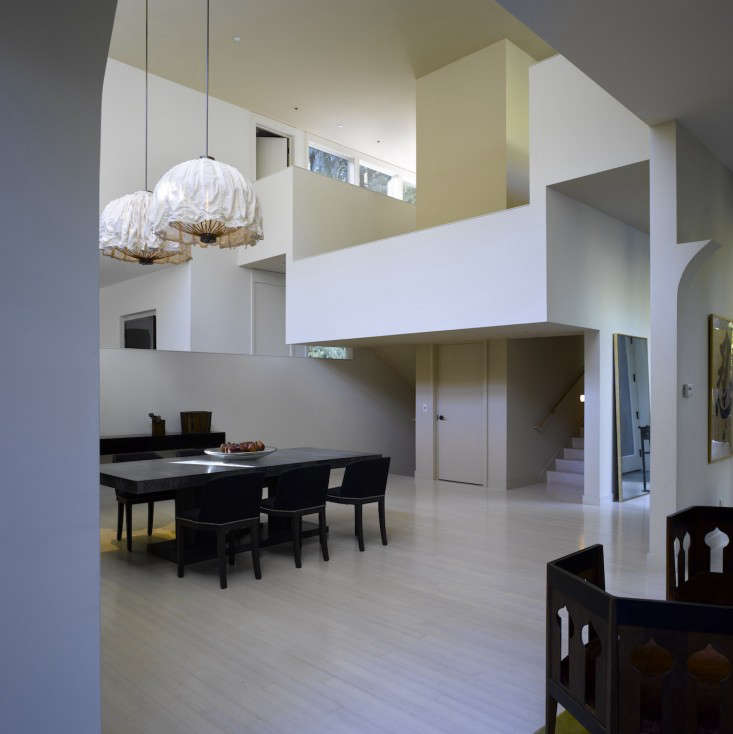 Above: Stair landings become balconies overlooking the interior court of the house. The highest ones lead to individual bedroom suites. Throughout, wooden floors are fumed bamboo. For the low-down on bamboo flooring, see our recent Remodeling 101 post: The Mystery of Bamboo Floors Revealed. 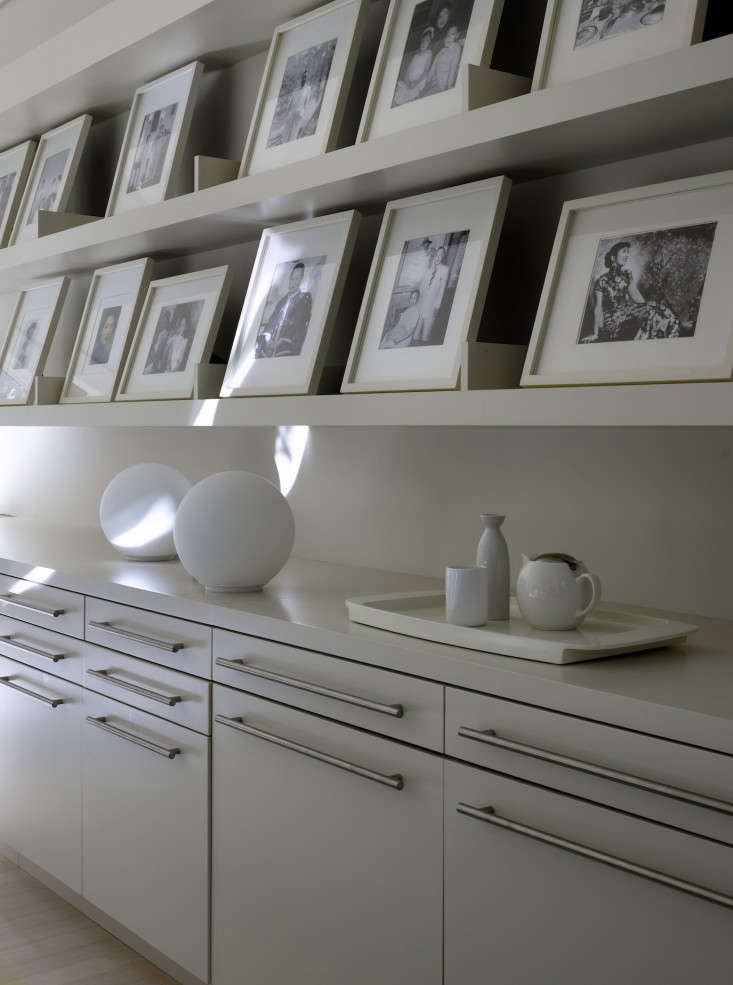 Above: In the parents’ study, uniformly-framed photographs capture the family across the decades, including glamorous shots of Mr. and Mrs. Tsao taken in Shanghai in the ‘40s and a picture of Calvin, a global citizen even at age five, dressed in a kilt and playing a toy bagpipe. 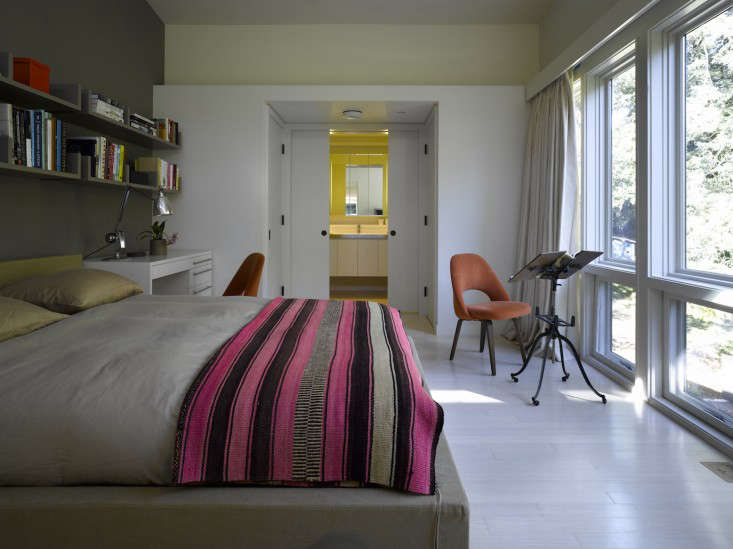 Above: In one of the sisters’ bedrooms, a wall painted deep olive balances the natural greenery framed by the opposite wall of windows. Floating shelves feature built-in bookends. Every bedroom has smart spacial moves–here an “insert” of twin closets form a vestibule to the bathroom–as well as doses of saturated color. A blanket or coverlet at the foot of the bed, in this case a brightly-striped Moroccan rug, is an easy way to introduce bright color. 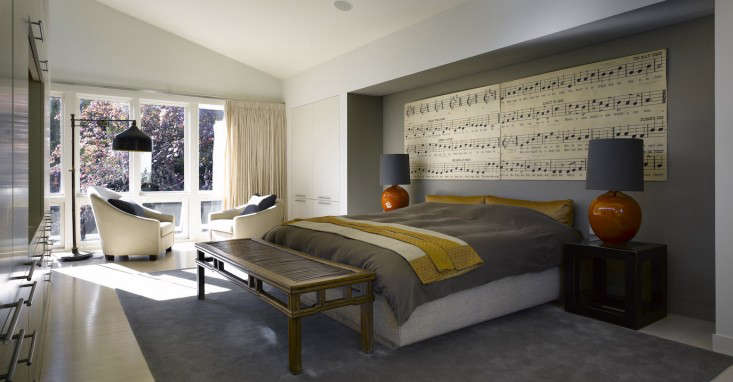 Above: Walls are rarely just walls in Tsao and McKown’s residential work. Rows of closets and cabinets not only provide ample storage but form solids and voids that create discrete spaces, such as a bay for a bed and a niche for a television. Calvin found the music panels above the bed in a Hudson, NY, antiques shop and the Chinoiserie floor lamp at a Paris flea market. The deep orange bedside lamps are native Californians. 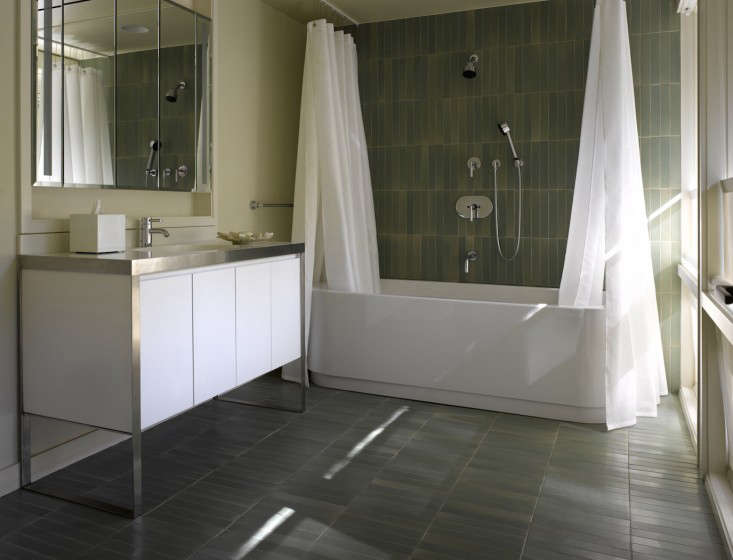 Above: Tiles in varied shades of celadon switch direction as they move from floor to wall. The shower curtain hangs from a ceiling-mounted hospital track with space between curtain and ceiling for ventilation. Setting the medicine cabinet into a niche larger than the cabinet itself creates additional spaces for toiletries, clearing the sink counter of clutter. 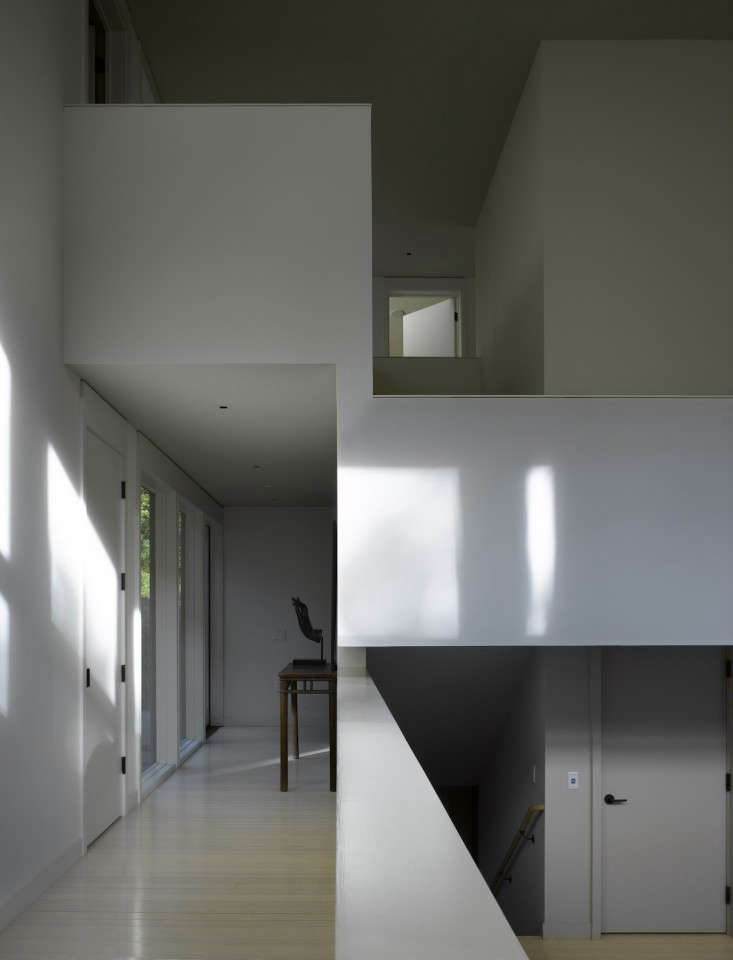 Above: A view toward the entry foyer demonstrates Tsao & McKown’s interest in–and deftness with–solids and voids. 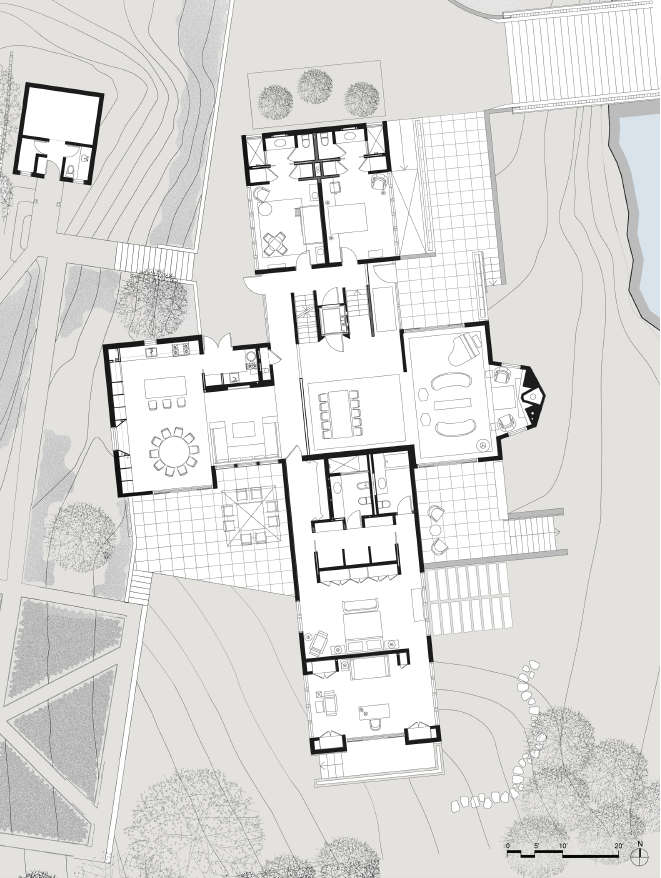 Above: The plan for the ground floor shows the dining room at the center with satellite structures–the living room, kitchen, and bedrooms–radiating off it. 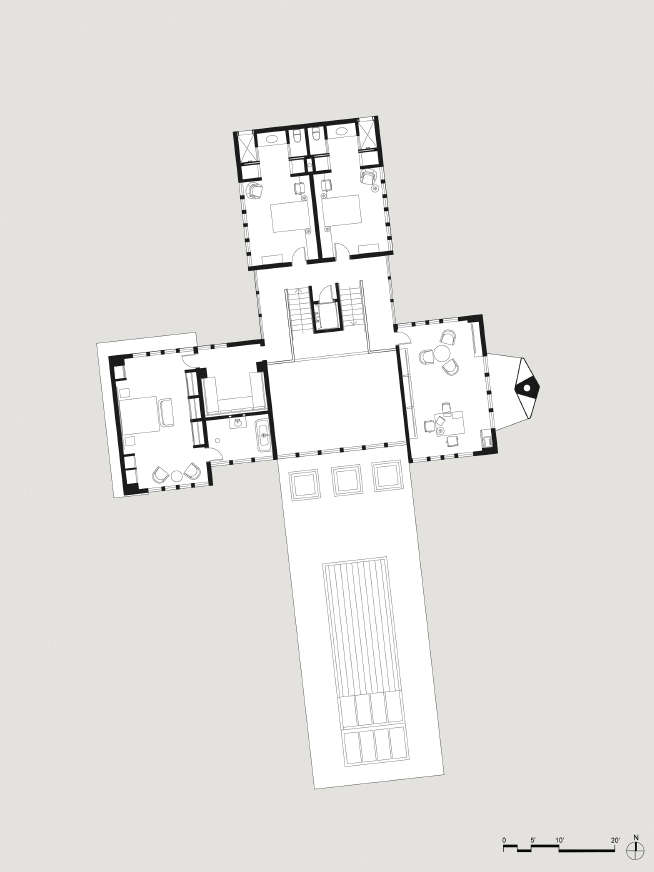 Above: The second floor is devoted to bedrooms suites.

On Tap: Beer with Chinese Herbs at Beijing's First Microbrewery