As a young girl growing up in Dublin, Michelle McKenna of Space and Grace was fascinated by the effect that color has on a person’s well-being. Capturing colors as some would butterflies, she developed a highly honed internal sense of color, which served her well when she and her husband, Brenlen Jinkens, “won” their London Victorian townhouse at auction. The house was in a serious state of disrepair–a literal “blank canvas.” But with her innate design sense, Michelle, a floral designer and color consultant (as well as a body work practitioner of Amatsu and Reiki), used color to capitalize on the infamous soft and gray British light. “I had to stop myself from using the strong, bright colors that look so good in the Mediterranean sunlight,” she says. “I wanted to generate as light a space as possible while being sympathetic to the gray skies of London.”

For her broad brush strokes, McKenna turned to English paint company Farrow & Ball (known for developing paint colors for the stately heritage homes of the National Trust) to develop her nuanced palette. And for her finer brush strokes, she was inspired by the botanical world (she studied floral design with Hannah McIntosh of Scarlet and Violet, and learned that “time seems to slow down when I arrange flowers”. “I often think that colors in a hospital should be used to relax people,” she says. “The colors you use can really change the atmosphere for the better.” 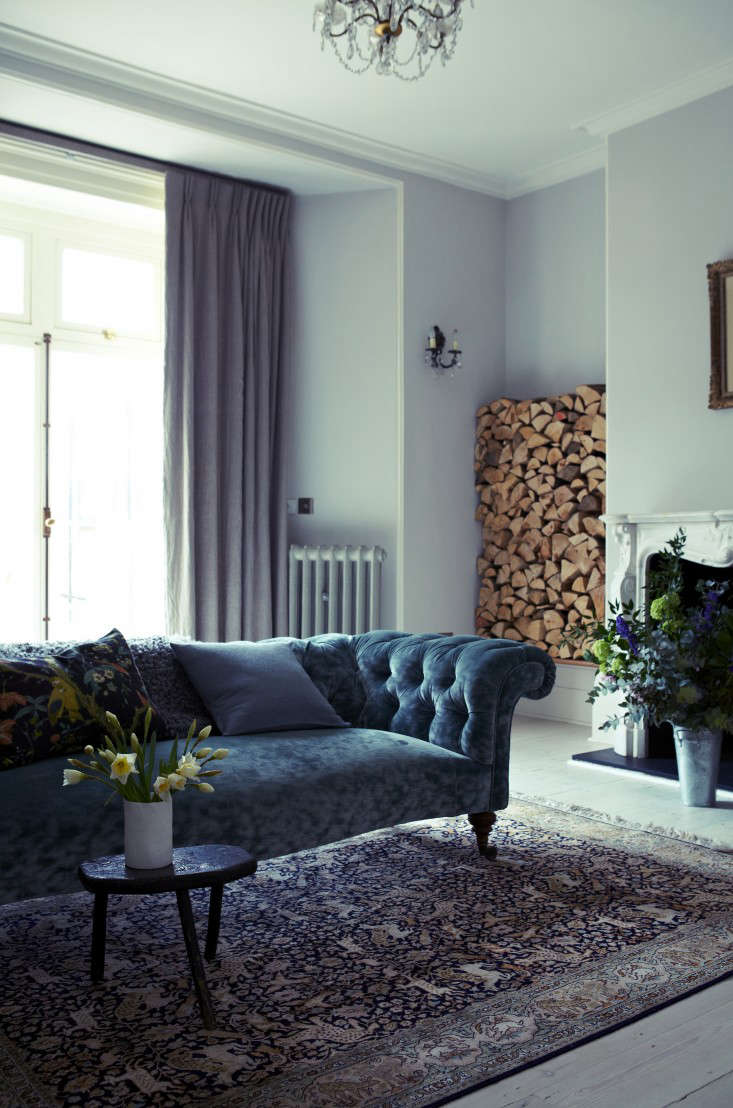 Above: After restoring the plaster and lathe walls throughout the house, Michelle wanted to use a breathable paint and found her solution in Farrow & Ball’s Casein Distemper finish, a form of early whitewash with a chalky finish that’s eco friendly. “It was important to me to have a house that breathes in this damp weather,” she says. “Most paints have chemicals in them that act as a membrane, keeping the moisture in.” In the living room, not content with the available whites, McKenna mixed her own color, a 50/50 mix Farrow & Ball of Cornforth White and Strong White. “When deciding colors, I painted samples directly on the walls because the plaster board could affect the end result,” she says. 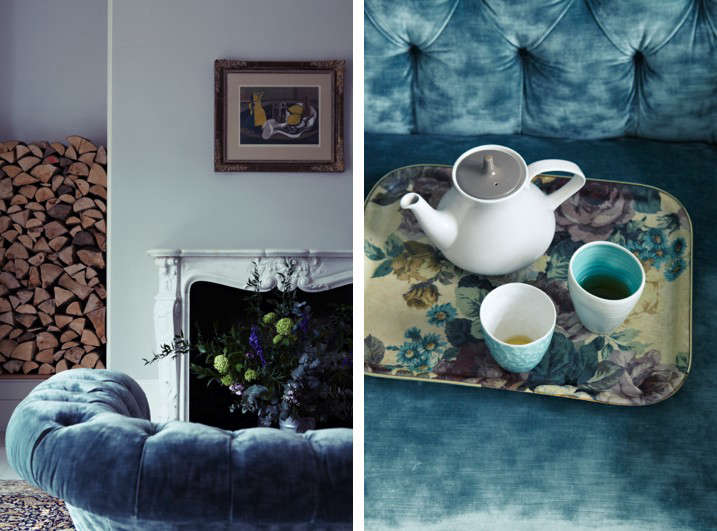 Above L: The colors of the George Braque print in a gold frame complement the textured blue–teal Dapple Velvet from Mulberry, which Michelle used to reupholster a Chesterfield sofa she found in a London antiques shop. Above R: A tray from Vintage Heaven plays host to afternoon tea served in a teapot from Poole Pottery. 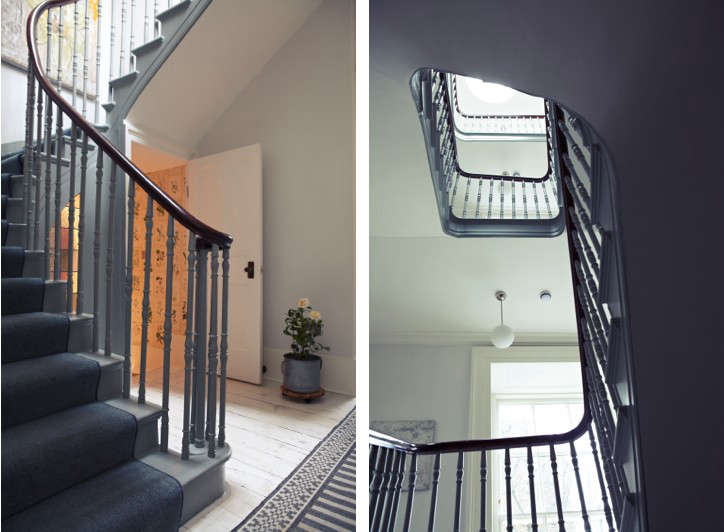 Above L: The walls of the stair hall were painted with Farrow & Ball Great White while the spindles and tread were painted with Farrow & Ball Pigeon. A vintage carpet runner from Sweden sits on original floors whose whitewash effect have come about from being lime washed. In the stairway to the basement, McKenna papered the walls down to the basement with pages from a Swedish botanical book, Bilder Ur Nordens Flora by C.A.M. Lindman. Above R: The house is five stories high; the centralized stair splits the house in half between front and back.

Above: Michelle brings the outdoors into the kitchen with handmade Chinoiserie Wallpaper from British company Fromental. Working with furniture makers The Goodingham Brothers, she created a traditional English kitchen with cherry countertops and cabinets in Farrow & Ball Light Blue. 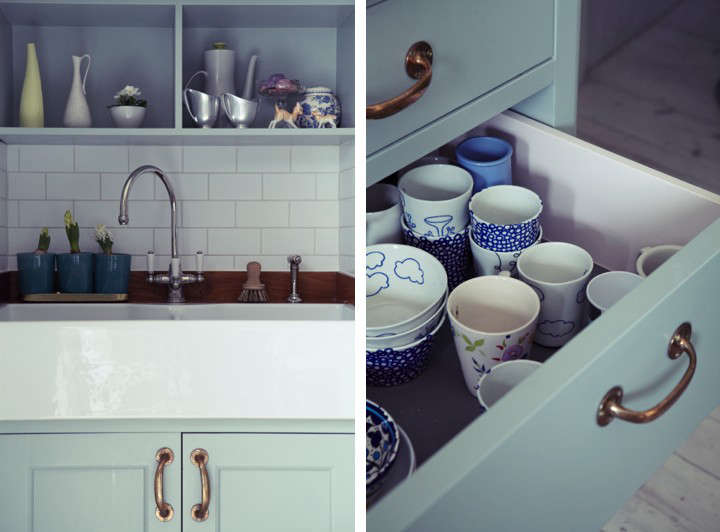 Above L: McKenna uses classic subway tiles as a backsplash in the kitchen. Above R: The household crockery displays a mixture of patterns and textures. 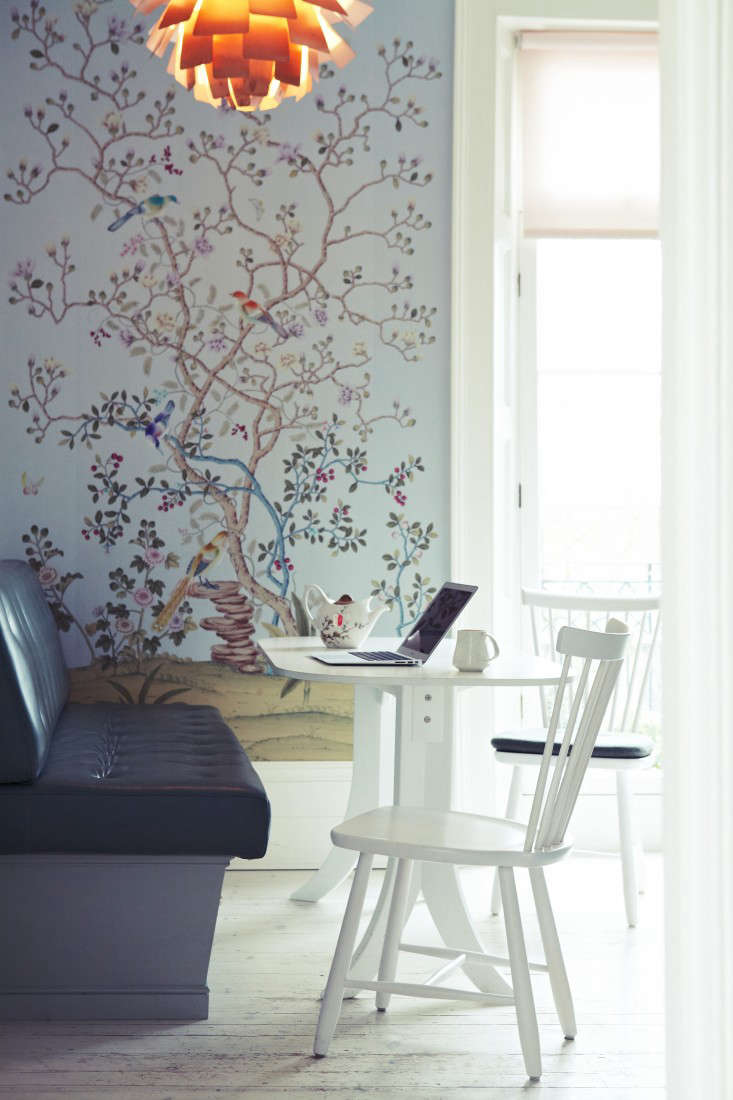 Above: In the seating area of the kitchen, traditional English meets midcentury Swedish. The birds on the Fromental Chinoiserie Wallpaper could almost fly to the copper Artichoke Pendant Lamp by Louis Poulsen, while a Lilla Aland chair by Swedish company Stolab pulls up to a green leather upholstered banquette. 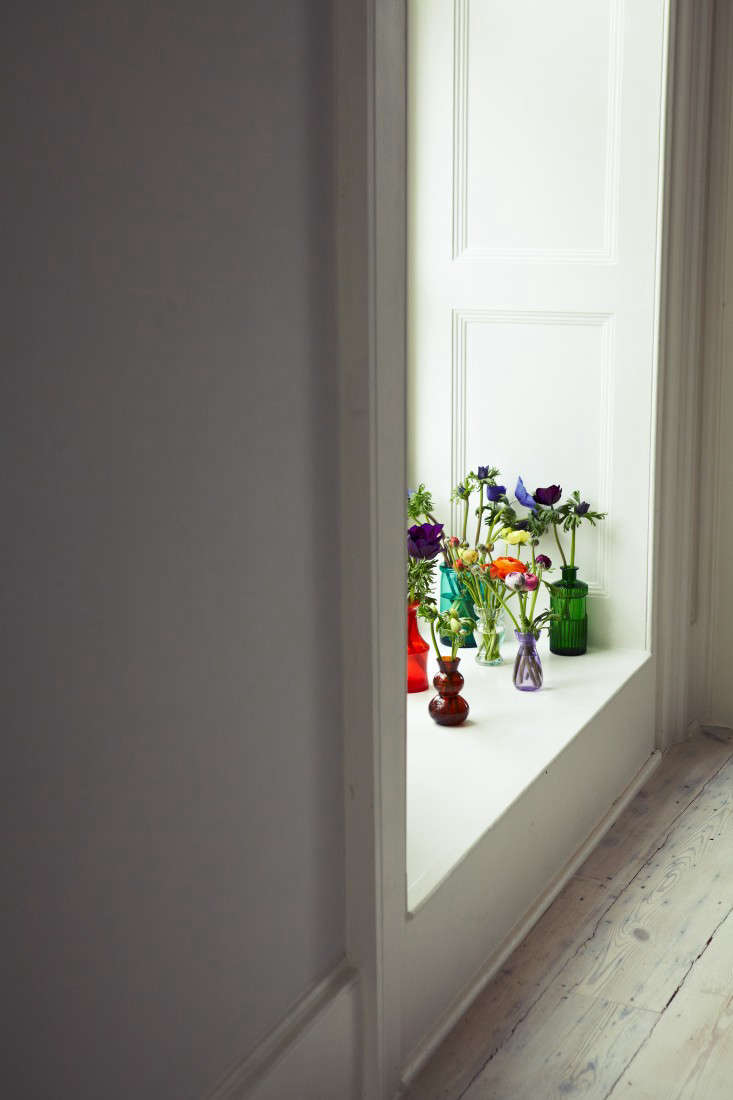 Above: The stair landing between the kitchen and dining room is a display opportunity for Michelle’s floral arrangements, displayed in her collection of jewel-toned vases. 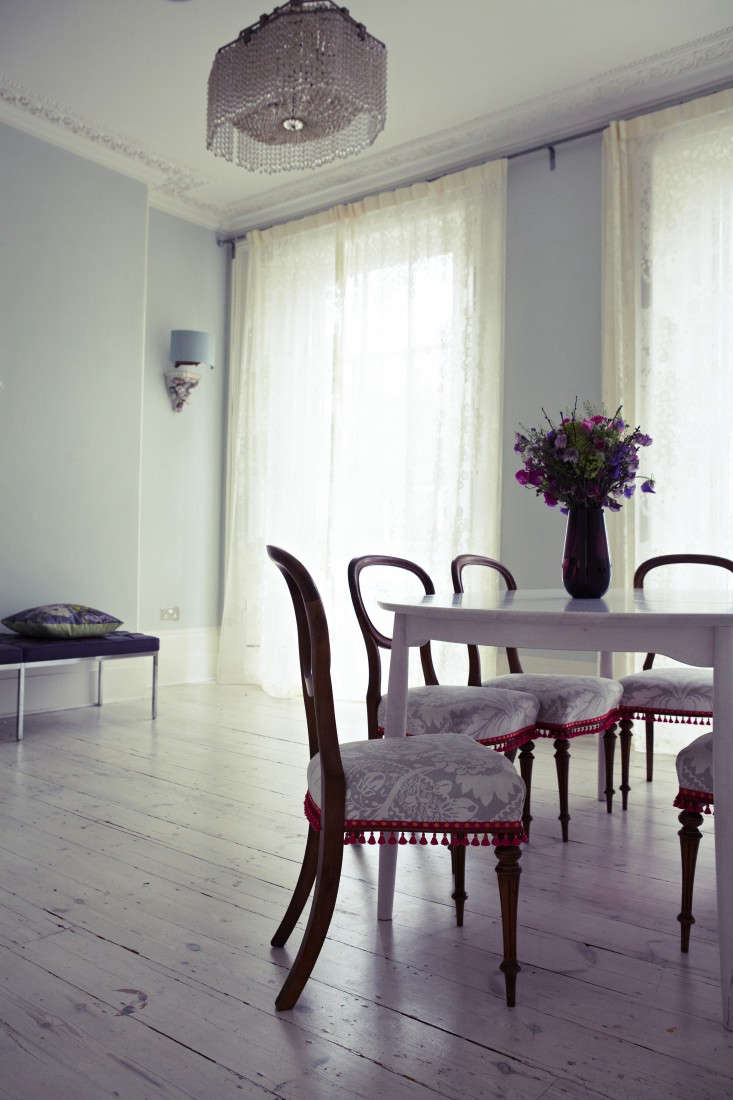 Above: Michelle used Farrow & Ball Pale Powder on the walls of the dining room; the woodwork is Winborn White, which is an off-white. “Using Strong White would have been too bright and would have drawn attention to the woodwork,” she says. 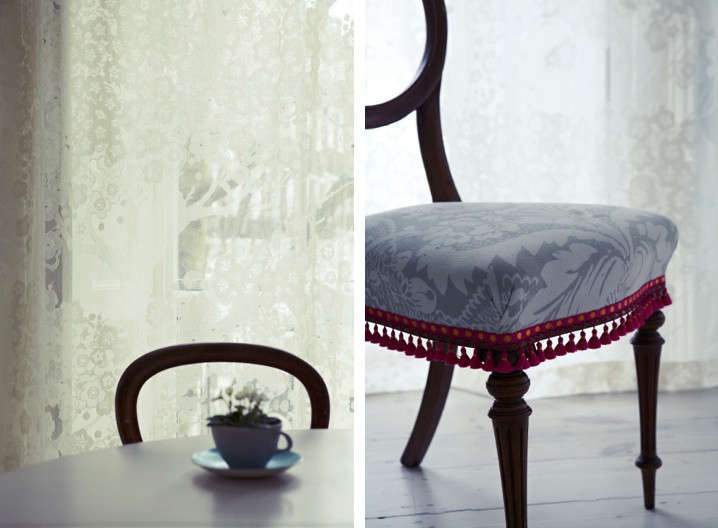 Above: A classic Michelle display on the sideboard in the dining room includes a combination of midcentury Swedish brass candlesticks and English china. Her floral arrangements have strong highlights, which are deep in color as opposed to bright. The gold painted lamp with the magenta lampshade is from Domino Antik in Stockholm while the painting of the cat is by animal portraitist and friend Leslie Mello. 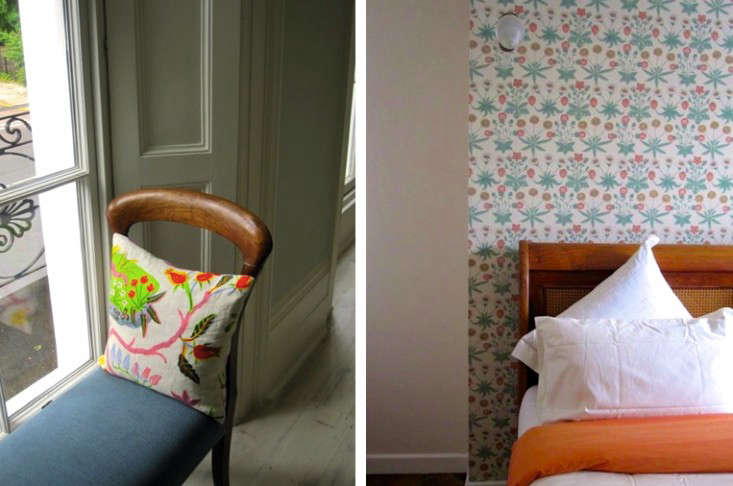 Above L: The Josef Frank linen cushion cover from Svensk Tenn in Stockholm adds highlights of color to the subdued English hues of the blue linen cover on the bench and the Farrow & Ball Pale Powder walls of the dining room. Above R: Michelle layers English Arts and Crafts artist William Morris’ Daisy Wallpaper behind the headboard of a bed. Photographs by Julie Carlson.

Above: in her dressing room, Michelle hangs two garden embroideries that a daily source of inspiration. 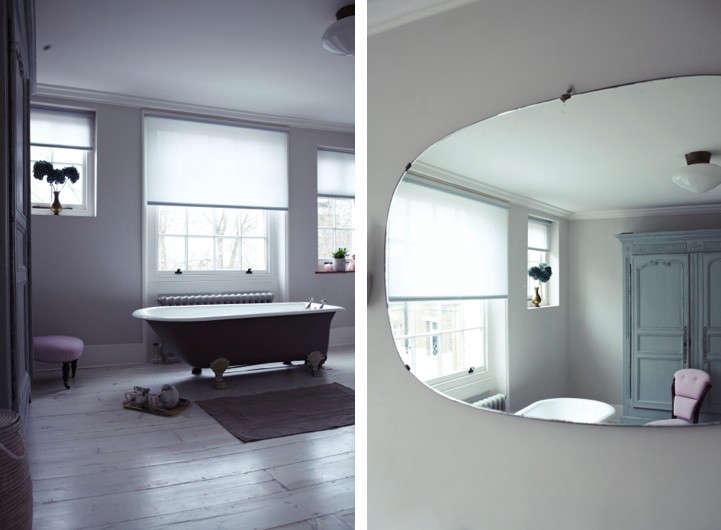 Above L: For the master bath, Michelle chose Farrow & Ball’s Skimming Stone. Above R: A reflection of a French marriage cupboard can be seen In the Italian mirror the couple purchased at Retrouvius. 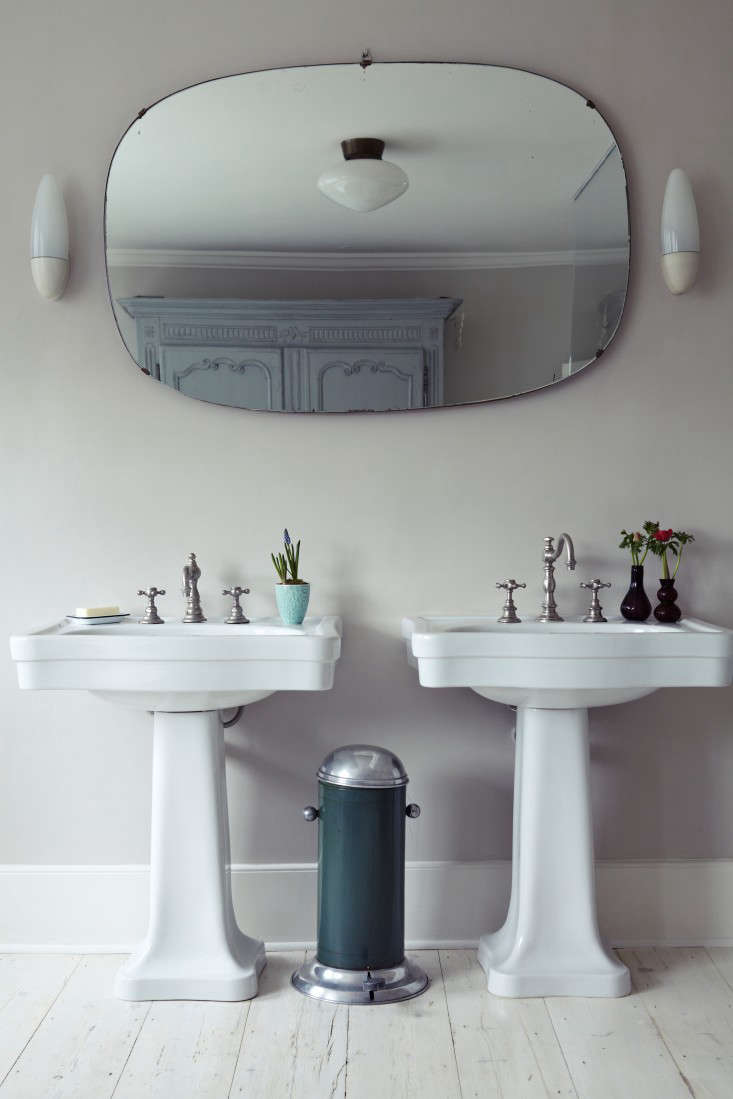 Above: An antique trash can that Michelle found at Columbia Market sits between two pedestal sinks with mismatched nickel faucets. 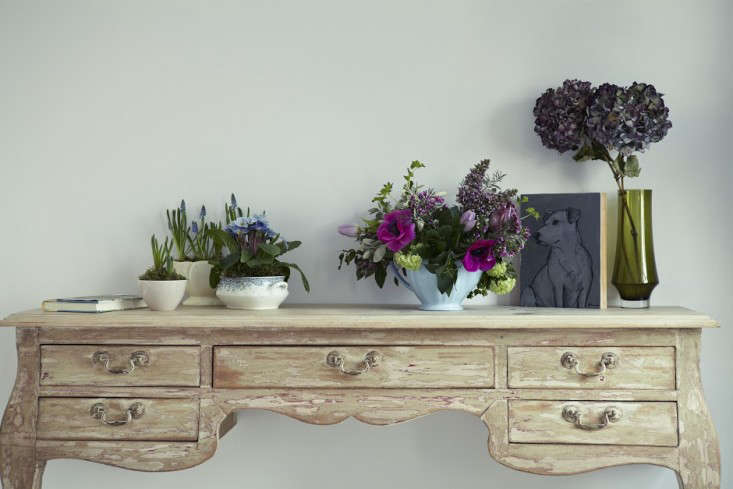 Above: In the bedroom, Michelle’s homemade bouquets and budding plants hint at the promise of spring in January. 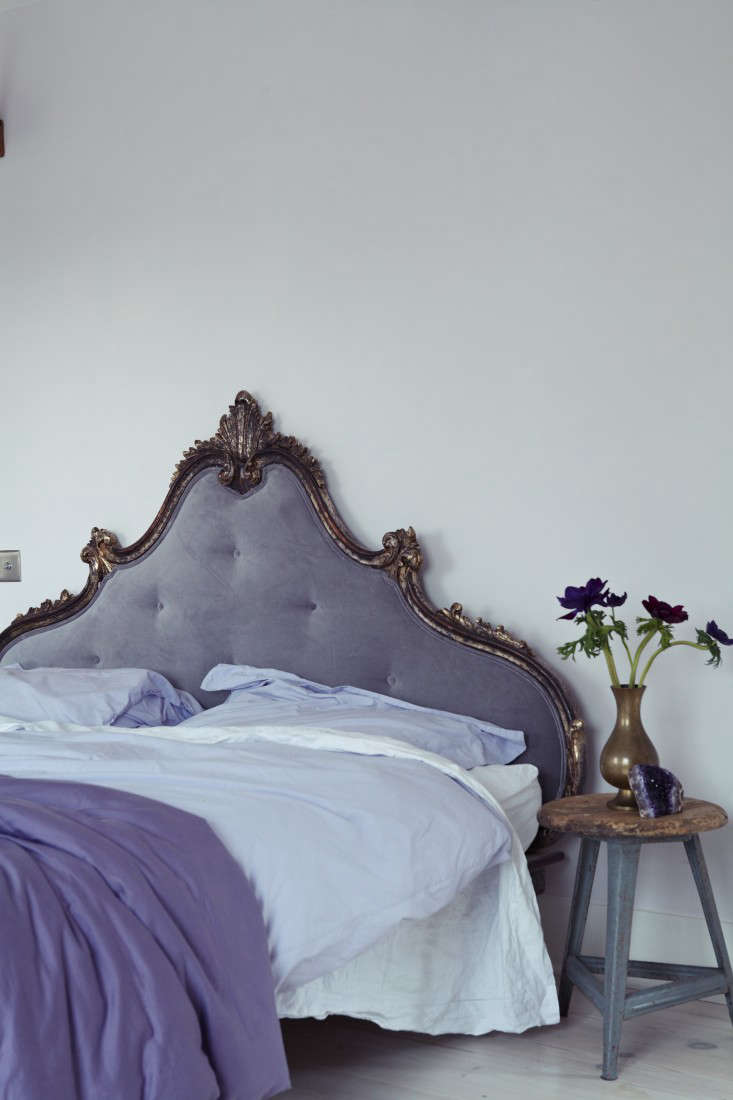 Above: In the master bedroom, a headboard from Maison Trois Garí§ons in Shoreditch is reupholstered in a soothing purple gray velvet that blends well with Farrow & Ball Great White-painted walls.

Above: A homemade floral arrangement and a midcentury Swedish lamp from Svensk Tenn on stools add peace and calm to the sanctuary-like bedroom.

As inspired by this house as we are? For many more views of of it, see The New Romantics section in our book Remodelista: A Manual for the Considered Home. More posts on the English palette? See Bespoke Color from an Accidental Decorator.

$57.27 USD from Marimekko
Fabric by the Yard

Current Obsessions: Out with the Old

A New Book from Farrow & Ball: How to Decorate