Designed in 1959 by Sir Miles Warren, New Zealand’s leading architect, the Ballantyne House in Christchurch is representative of the Christchurch School of architecture of the 1950s, which borrowed influences from Brutalism along with Danish and Japanese design. Current owners Kristina Pickford, an architectural historian, and her husband, Michael Wolfe, bought the house from the Ballantyne family in 2009 and painstakingly restored it to its former glory (the house was remodeled in the 1980s). The parquet flooring was restored, the kitchen updated with Miele appliances, the bathrooms with Duravit and Vola fittings, and ducted heating and air-conditioning were installed. Here’s a closer look at the interiors and property.

Photography courtesy of Mary Gaudin and Sam Hartnett, as noted. 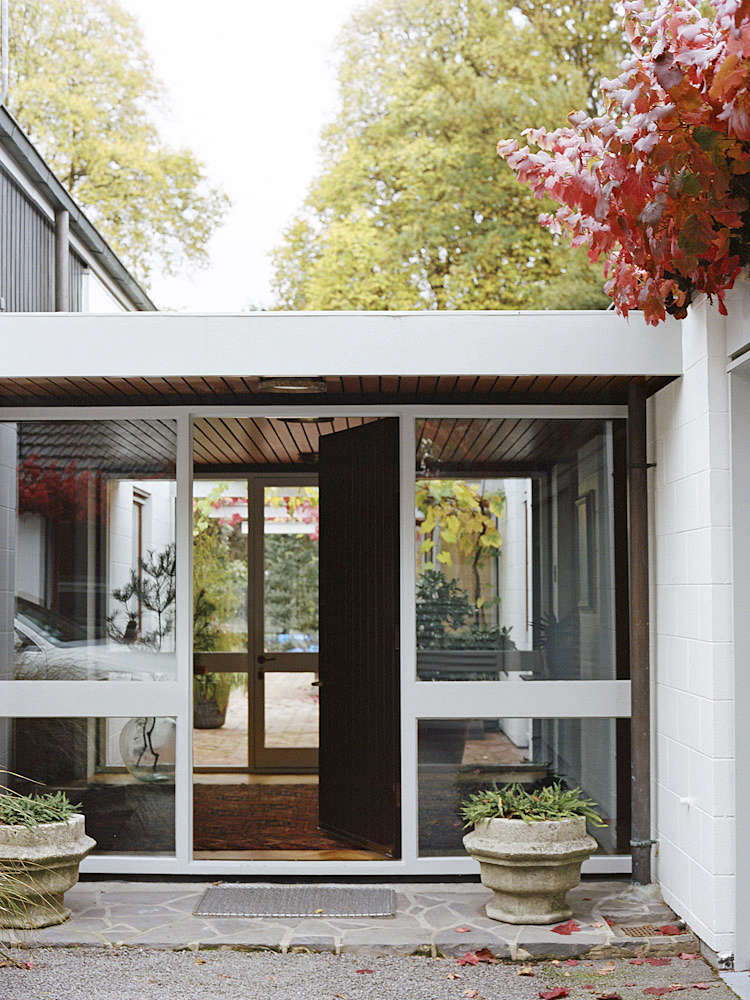 Above: The timber frame and concrete block house is located at 210A Clyde Rd. in the Fendalton neighborhood of Christchurch. Photograph by Mary Gaudin. 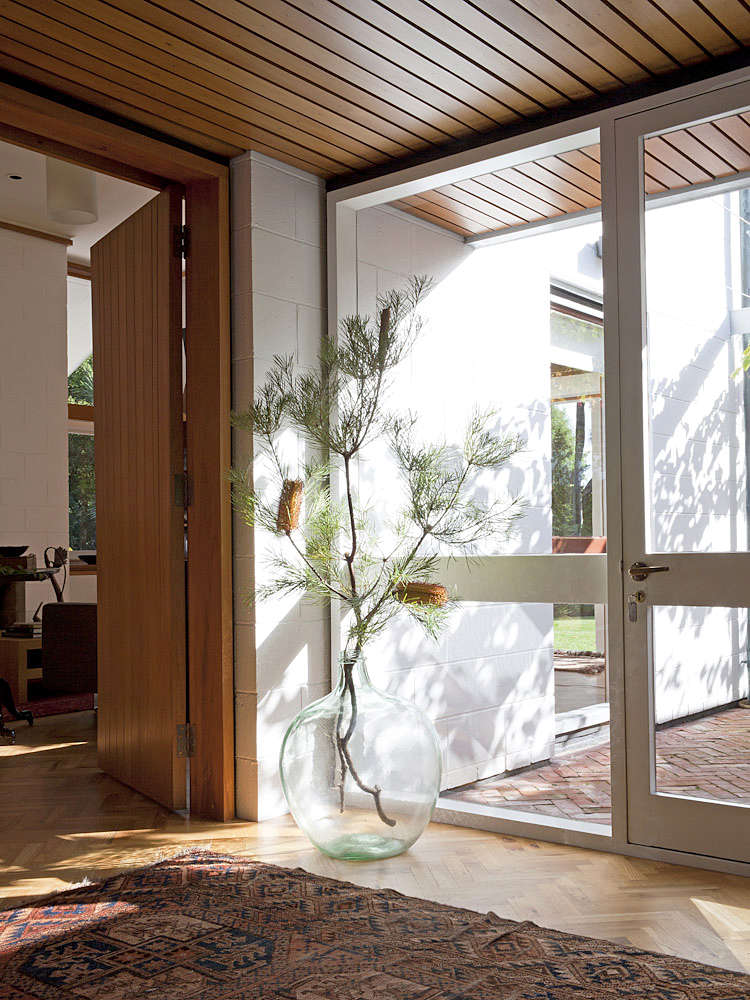 Above: Solid oak parquet carries from the entryway to the kitchen and living rooms. New Zealand native clippings sit in an old glass carboy that was once used for fermenting wine. Photograph by Mary Gaudin. 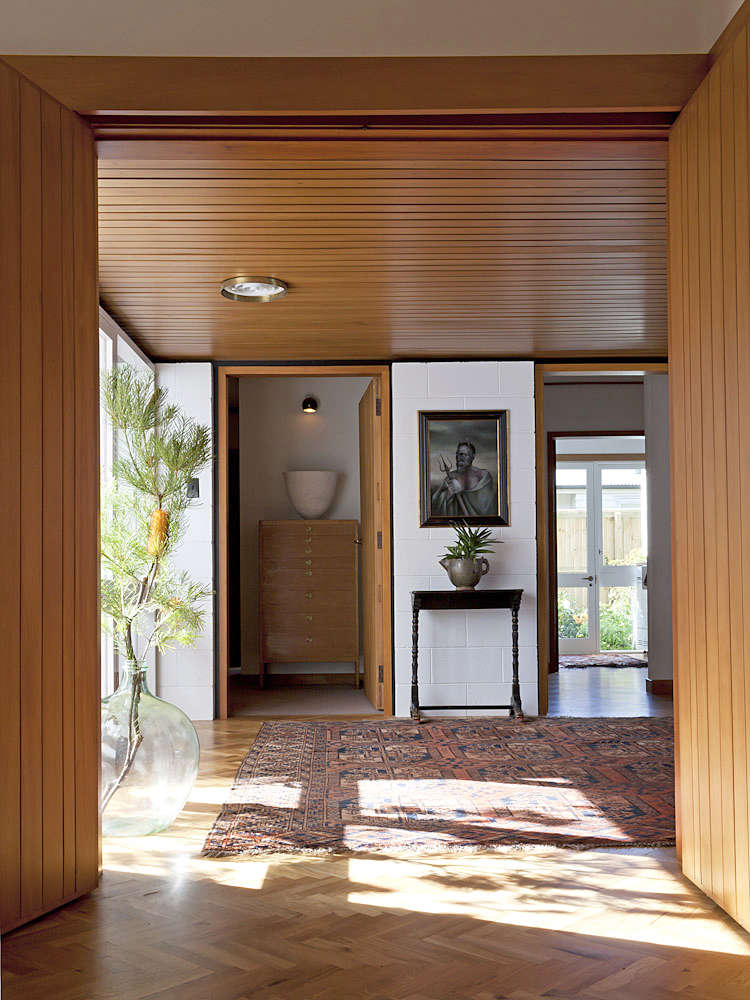 Above: The house is a squared-off floorplan consisting of a living and dining room, kitchen, and a long wing of three bedrooms. Photograph by Mary Gaudin. 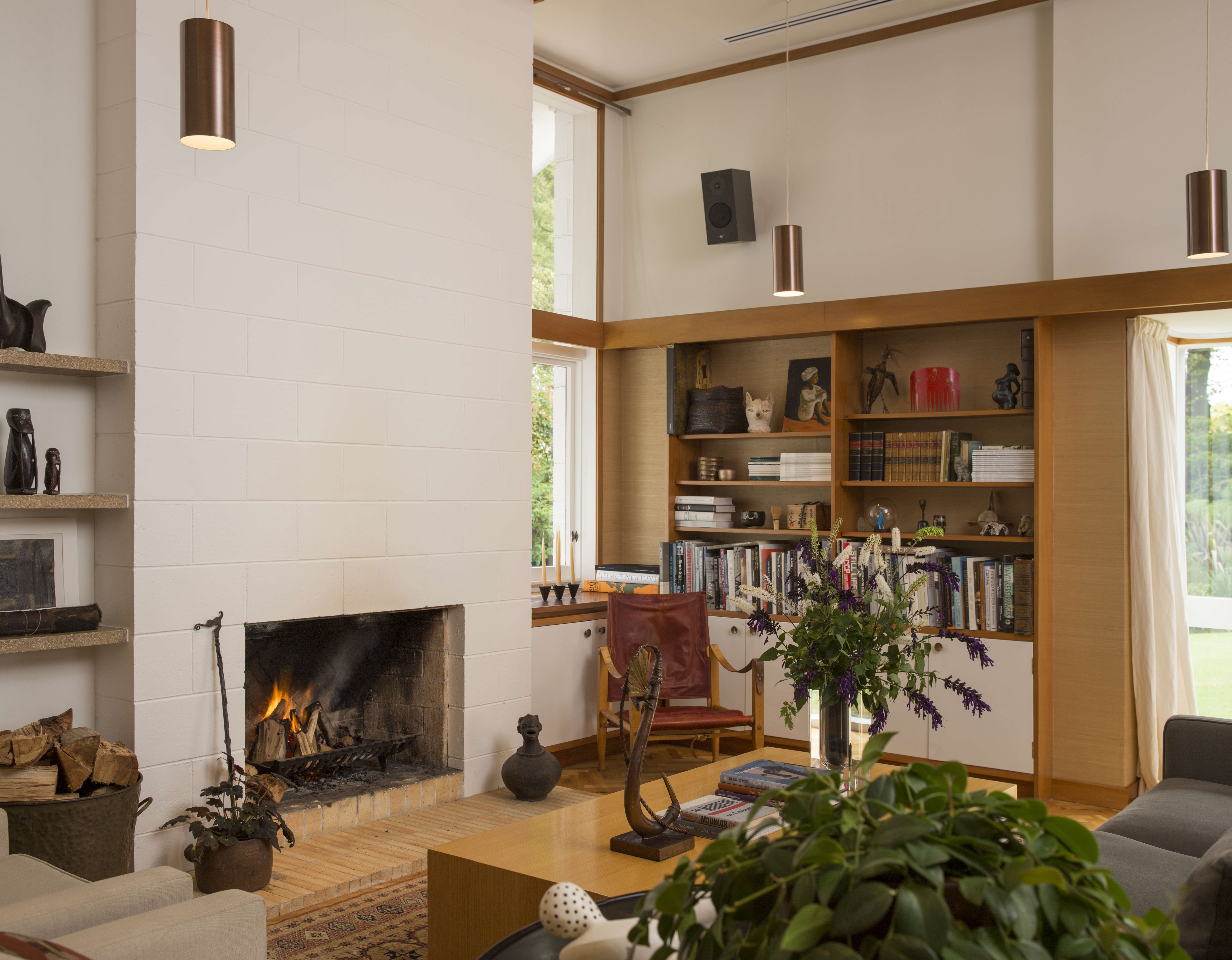 Above: Pale pink terrazzo shelves and built-in custom joinery shelving flank the concrete fireplace in the living room. When asked about living in a modern house, Pickford says, “I believe that well-designed modern homes are easy to live in. The R.H. Ballantyne House is finely detailed and has a human scale.” Photograph by Sam Hartnett. 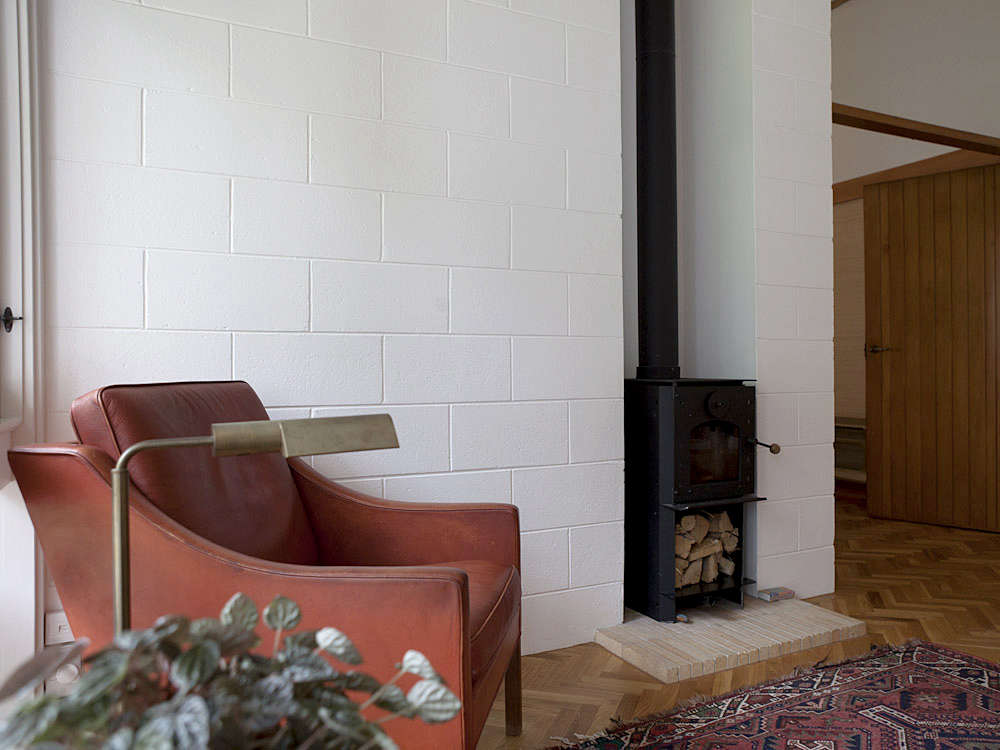 Above: Owners Pickford and Wolfe have a love for midcentury design that started long before they bought the Ballantyne House. A Børge Mogensen 2207 Lounge Chair sits near the house’s woodstove. Photograph by Mary Gaudin. 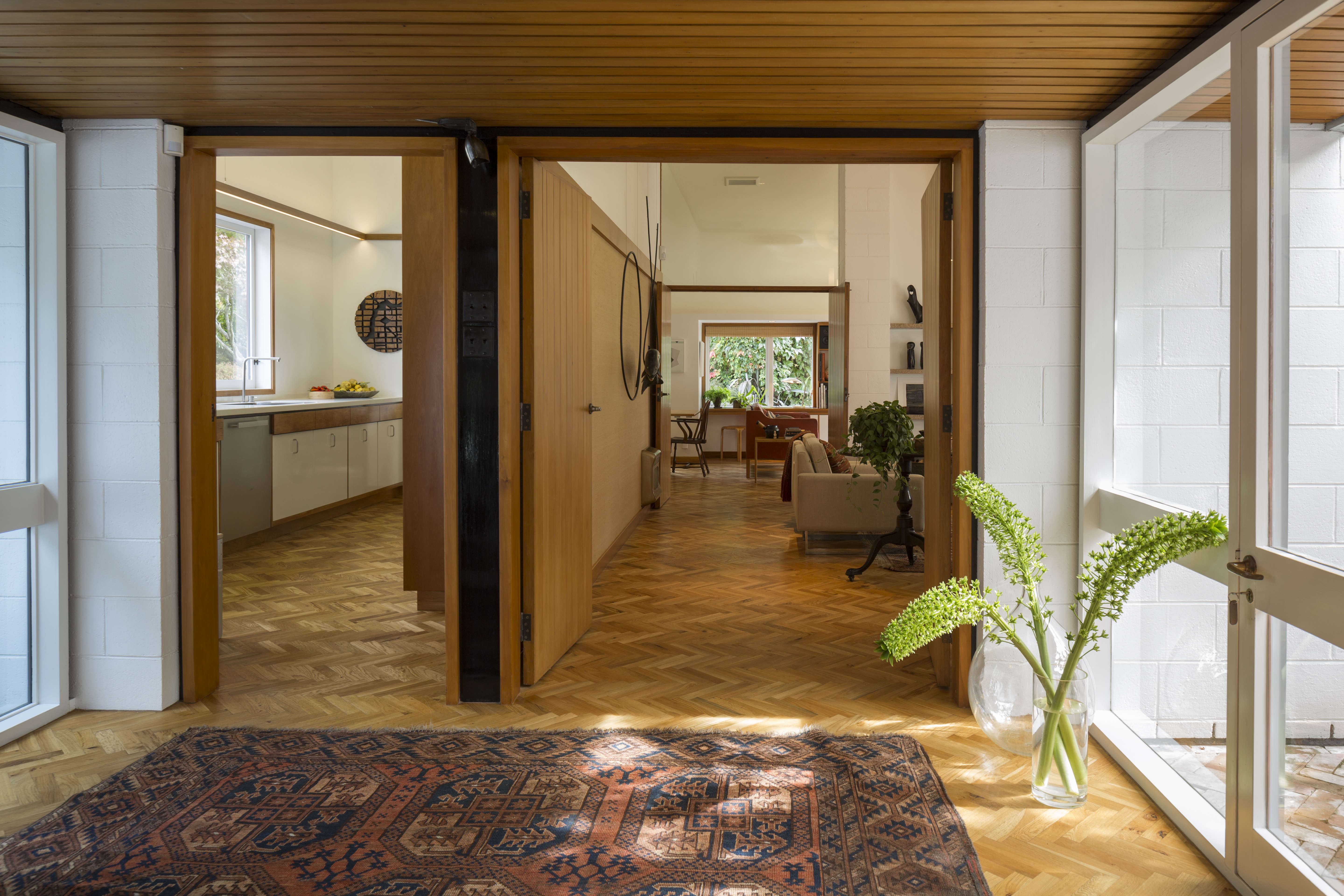 Above: A view into the kitchen and living room. The artwork on the living room wall is by Christchurch artist Bing Dawe. Photograph by Sam Hartnett. 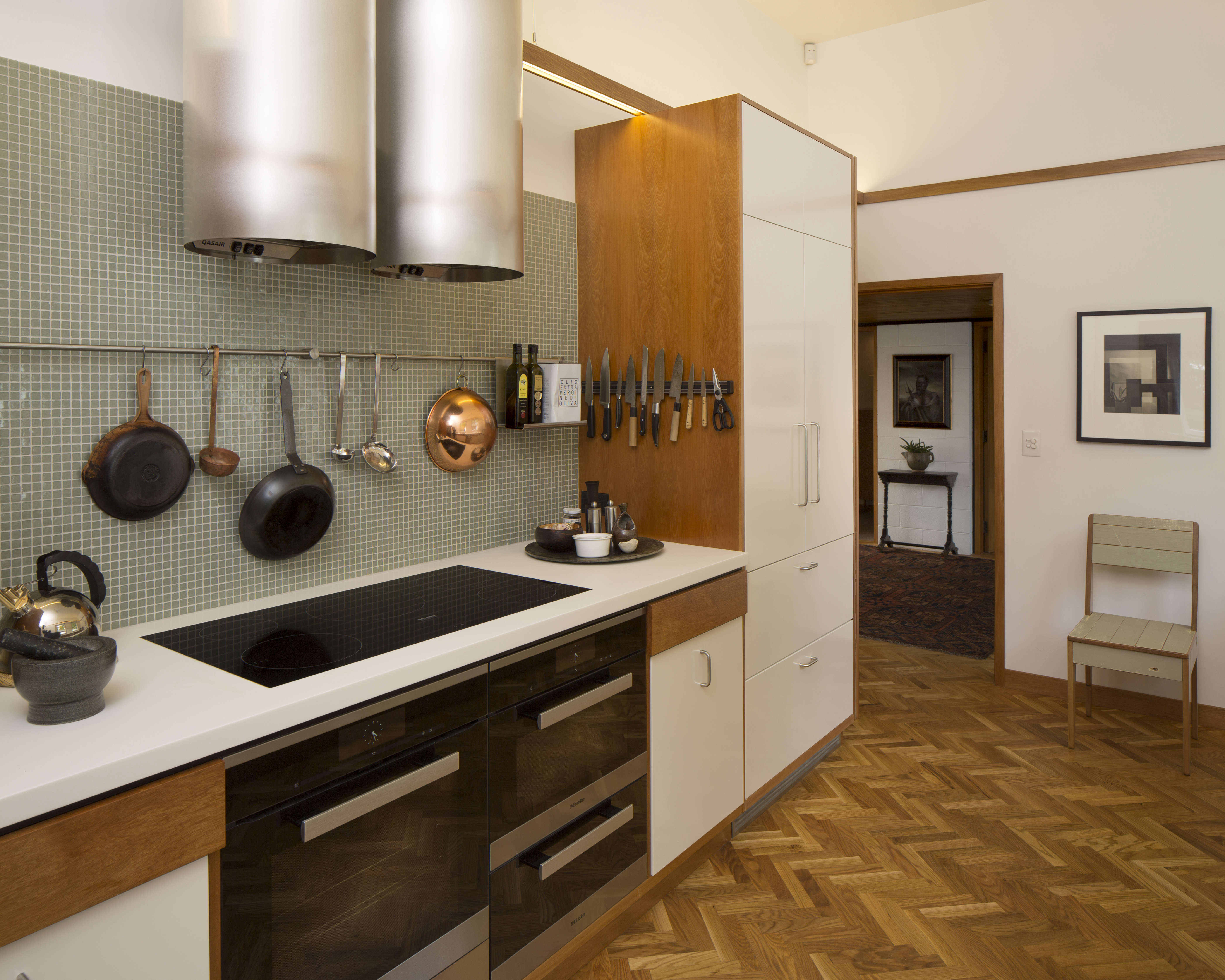 Above: Pickford and Wolfe updated the kitchen with Miele appliances: an Induction Cooktop, Convection Oven, and Built-In Steam Oven. Photograph by Sam Hartnett. 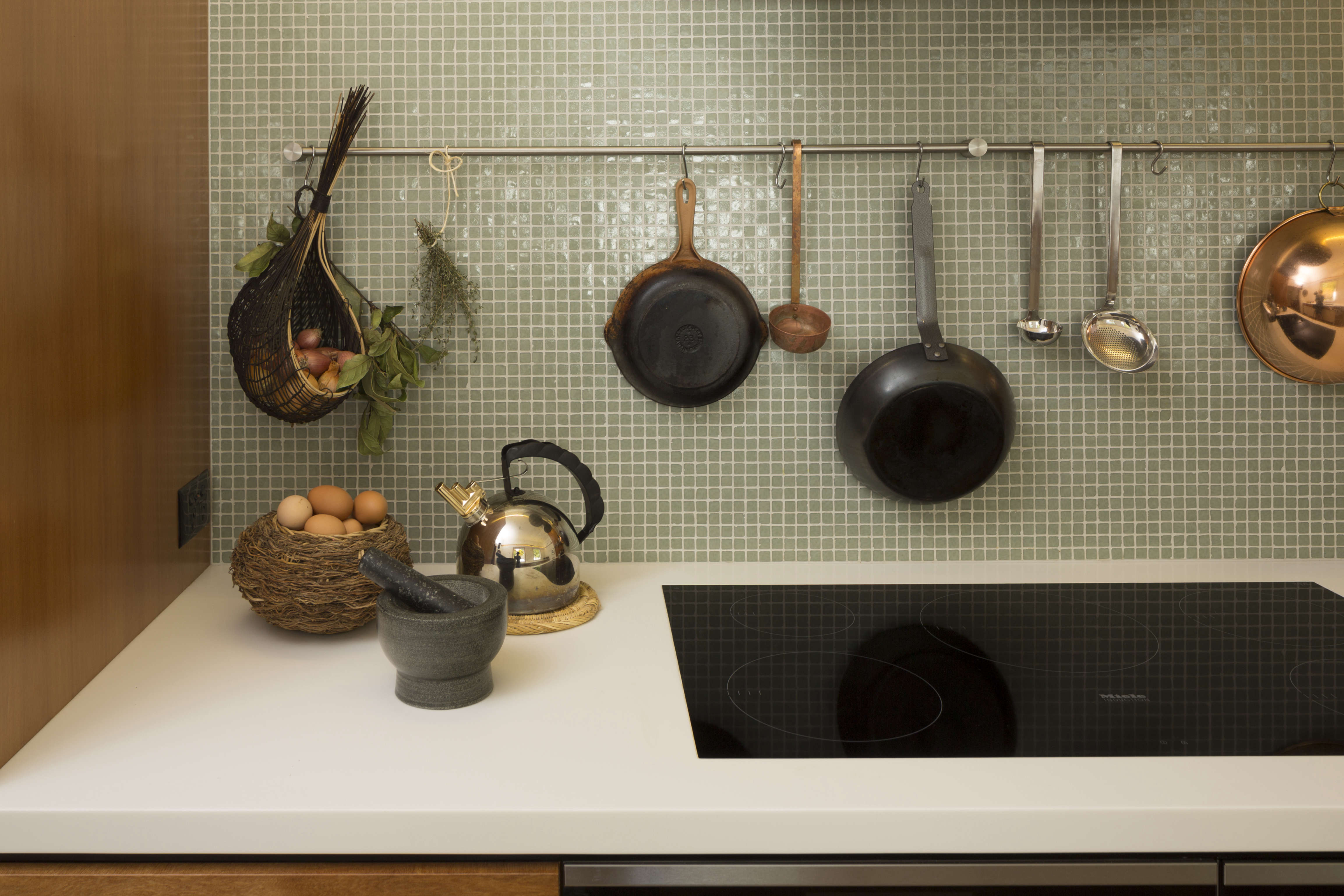 Above: A stainless steel rail was installed for storage against the green glass mosaic backsplash. Photograph by Sam Hartnett. 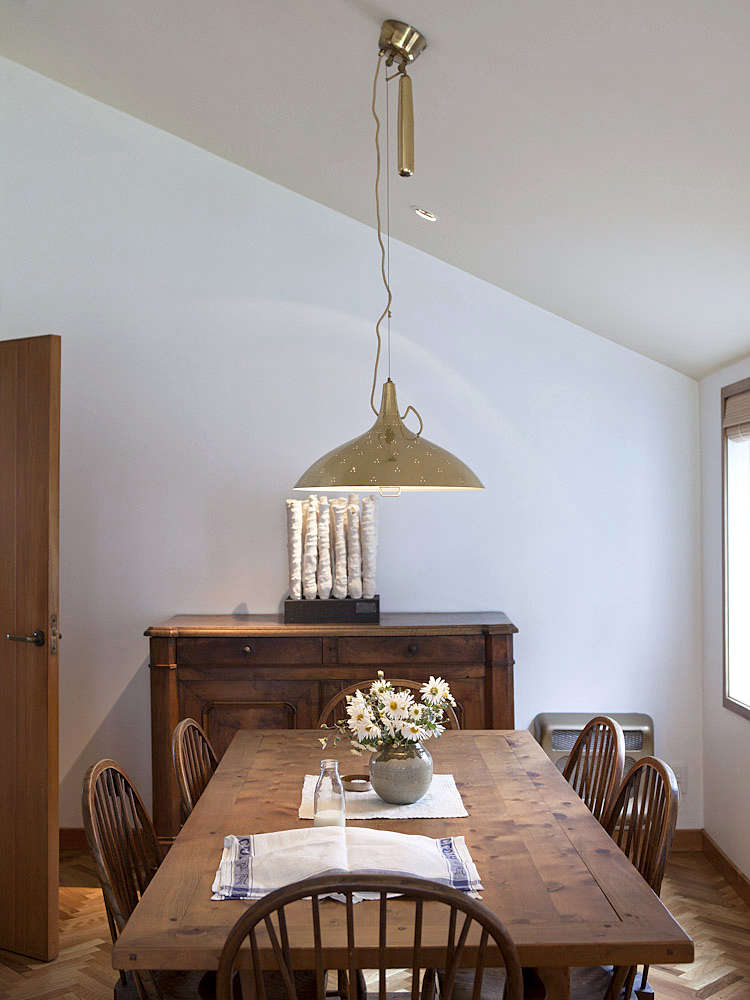 Above: The Paavo Tynell Brass Counter-Weight Pendant Lamp that hangs above the dining table is something Pickford bought in while attending a symposium on the Conservation of Modern Architecture in Helsinki. Photograph by Mary Gaudin. 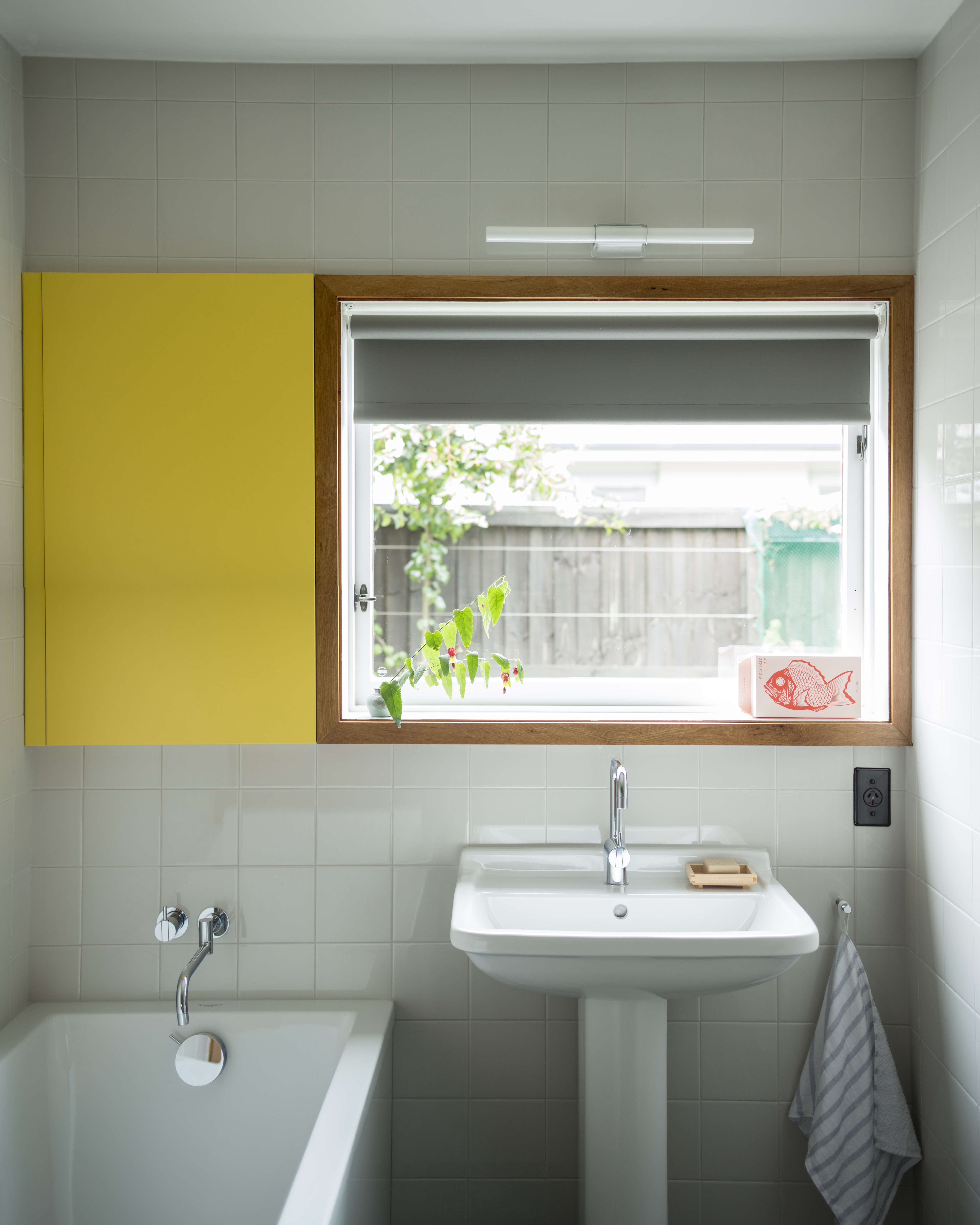 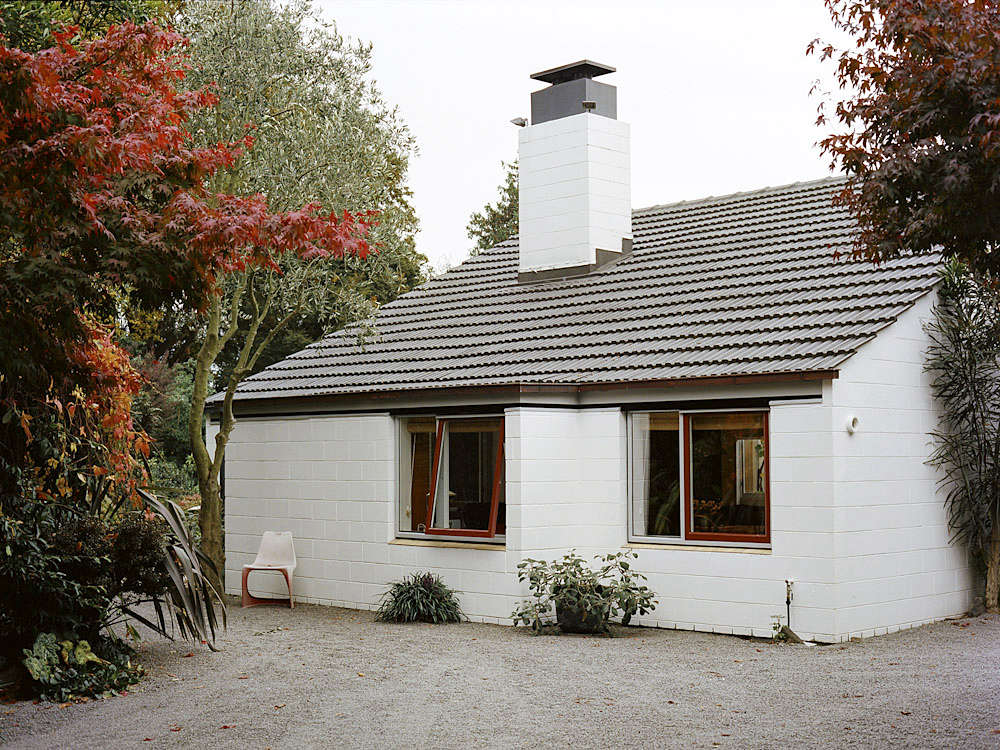 Above: The house is down a long driveway (it was featured in Down the Long Driveway, You’ll See It by Mary Gaudin and Matthew Arnold) and is hidden from the streets and neighbors via layers of native plantings. Photograph by Mary Gaudin.

For more on the property and abundant gardens, see our post on Gardenista.

Kitchen of the Week: Joined-Up Thinking in South-West London