Four years ago, during the aftermath of Hurricane Sandy, fashion industry veterans Carla and Niall Maher traded their Manhattan apartment for a 1950 suburban ranch house with a zigzag roof in Westchester, New York, just north of the city. First-time remodelers, the couple weren’t quite sure what the house would require of them, but one project (that roof, for instance) immediately led to another (75 new custom-size panels of glass for all the windows), and Carla has been chronicling these improvements on her Instagram feed, @the_wood_house, for a rapt following—us among them.

Built into a hillside in the town of Ardsley, the four-bedroom, single-story ranch is set in a wooded enclave of midcentury dwellings designed by Roy S. Johnson and Stanley Torkleson: “Thirteen homes were built through a cooperative that consisted of architects, engineers, photographers, academics, and other professionals,” says Carla. “They pooled their resources to keep costs down and made sure each house had enough land and privacy.”

The Maher’s is the only one that hasn’t been added onto over the years, but that’s not to say it was untouched: The previous owners, who bought the house from the family that commissioned it in 1950, put up sheetrock, painted the walls white, added an Ikea kitchen, and cast the rooms in a much more contemporary light. Carla and Niall were happy with the way it looked, but out of curiosity turned up original plans and a 1954 book that featured the house in its prime. “From then on, it was as if we had both caught a bug,” Carla told us. “We didn’t set out to buy a house to restore, but we felt compelled to bring back what had been.” 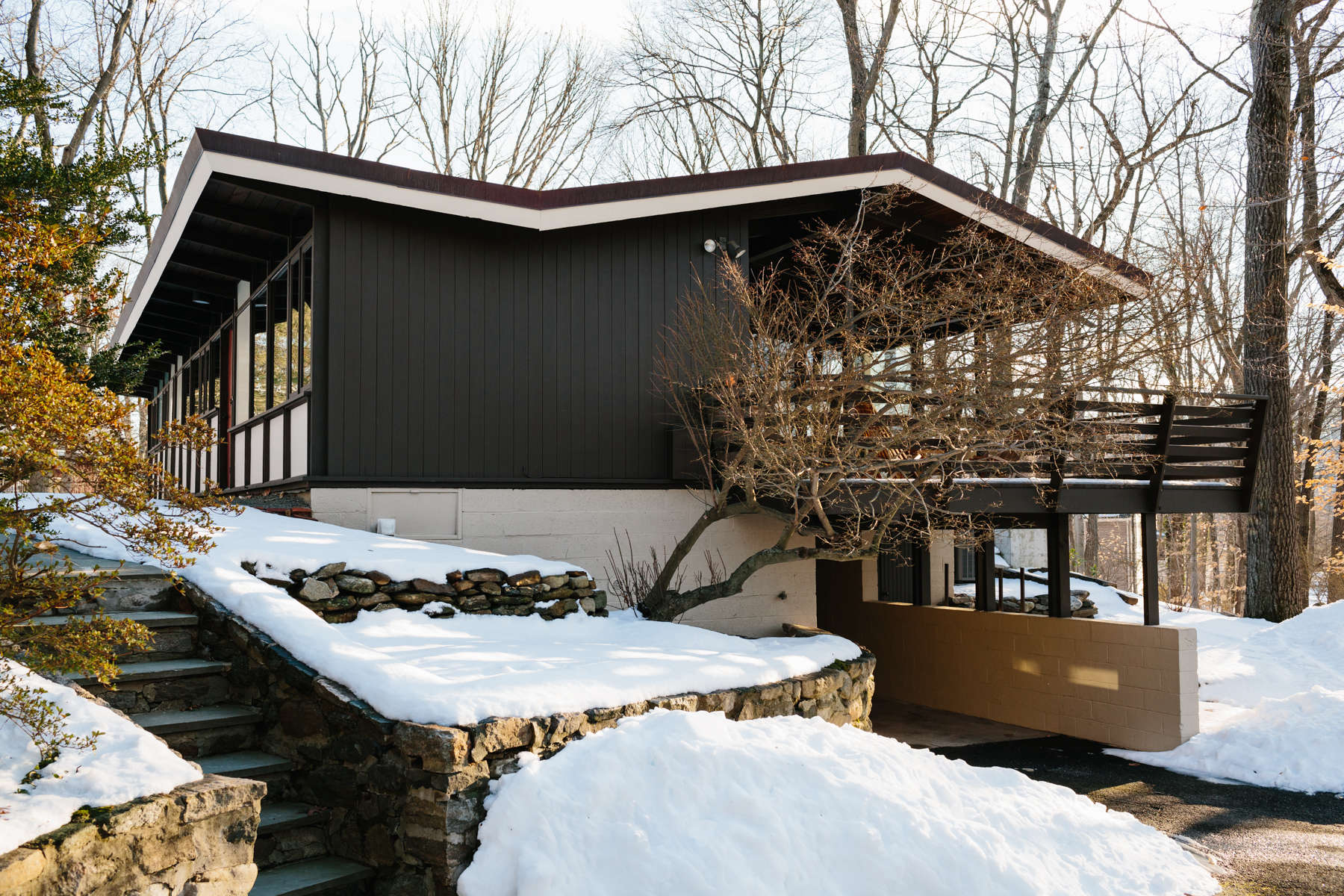 Above: We headed up to Ardsley last week to capture the house. 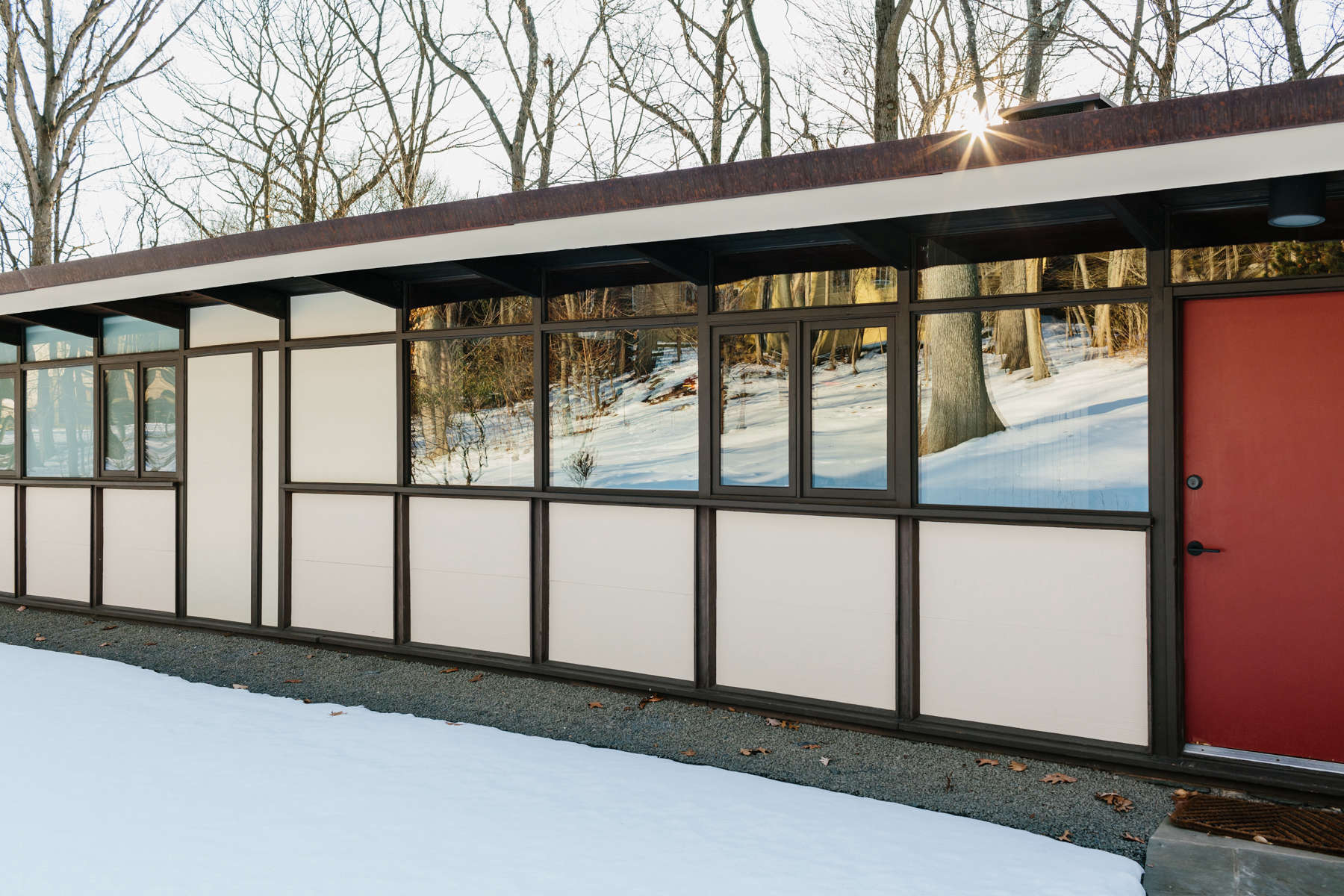 Above: In vintage photos, the house was entirely red, so the Mahers opted to paint the front door Cherokee Red from the Voice of Color Frank Lloyd Wright Falling Water collection. The white panels—painted Frank Lloyd Wright Bone White—are the original Durisol, an insulated concrete (mimicked in places with aluminum insulated panels that the Mahers have used in shop settings).

The couple may be new to home improvement, but they’re longtime midcentury design fans who know what they like and how to source it: The former director of operations at Comme des Garcons, Carla is currently a consultant specializing in store and showroom openings, and Niall is senior vice president of brand merchandising and design operations at Ralph Lauren’s Double RL & Co. After their first contractor nearly burned the house down, the two found trusted specialists, including builder/cabinetmaker David Leone of Leone Contracting in Peekskill. And whatever they can take on themselves, they do, including all painting, interior and exterior. 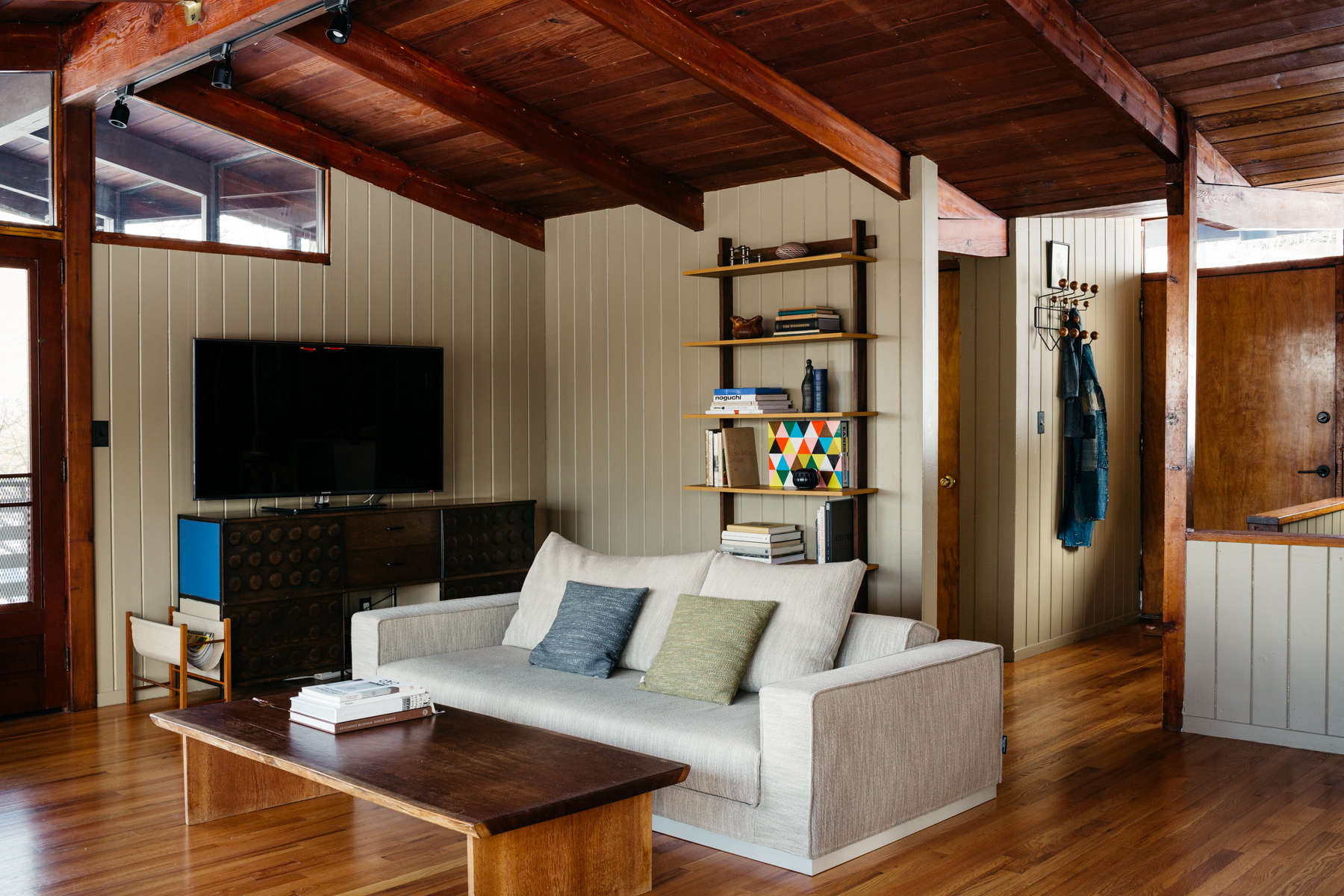 Above: The living room has a newly revealed cedar tongue-and-groove ceiling, which had been covered in recent years by insulation and sheetrock. “When we replaced the roof, we were able to add insulation there and expose the rafters here,” says Carla. She considered stripping the white paint on the walls to match the ceiling (see the master bedroom below), but fearing it would make for a “very dark, cabin-y space,” instead painted the paneling Nutshell from Home Depot’s Behr, “a color you see in nature that’s not as jarring as white.” 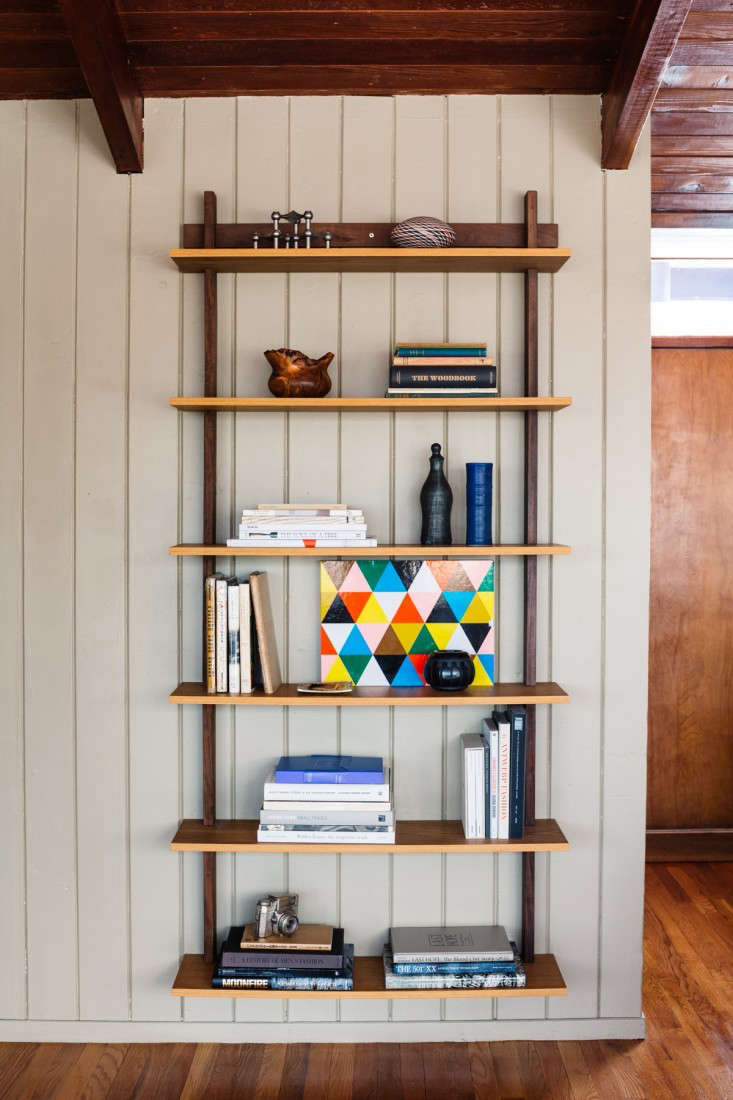 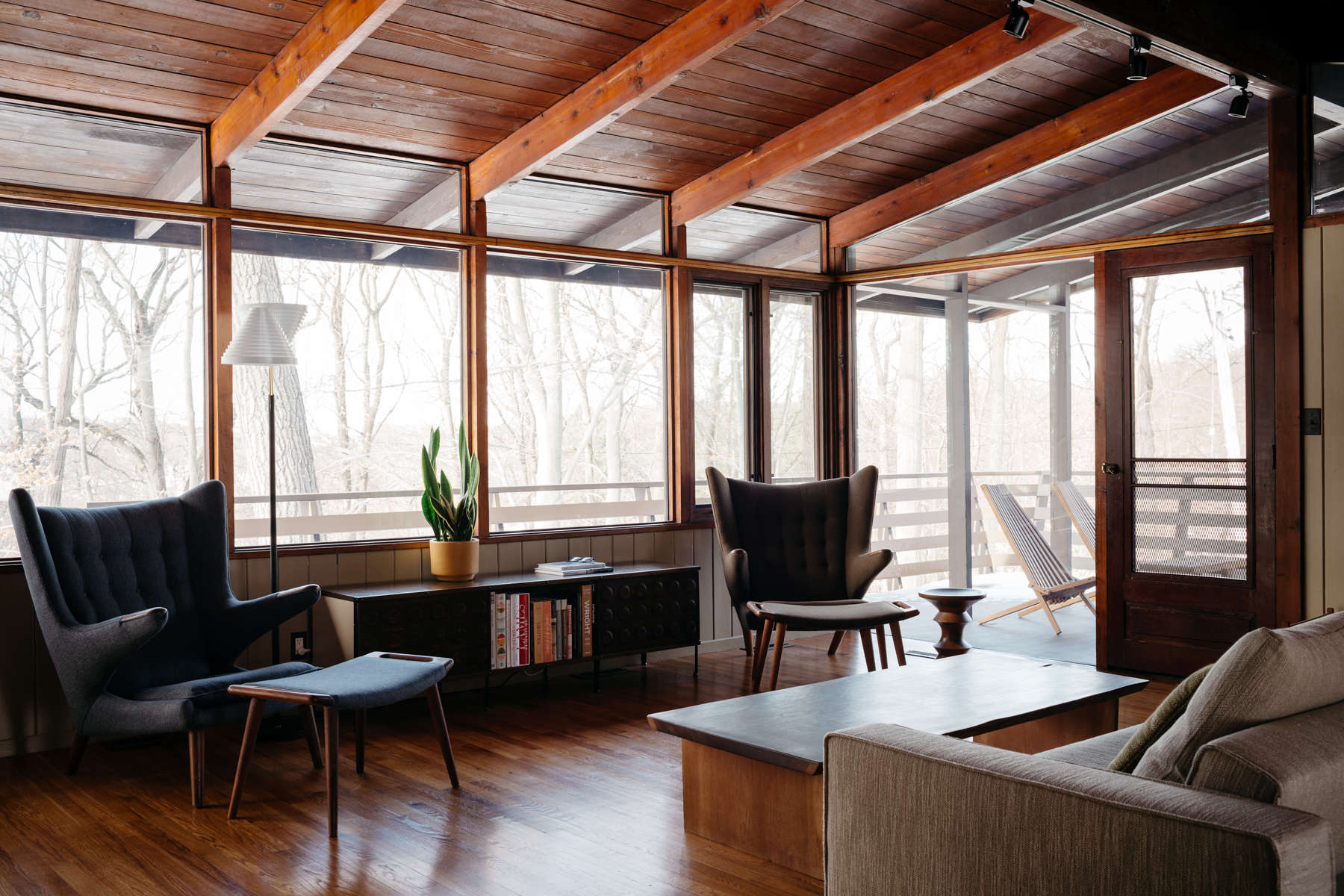 Above: The pair of Hans Wegner Papa Bear chairs and ottomans are family heirlooms reupholstered in blue and army green—they were purchased by Niall’s parents when he was a kid during sabbatical years the family spent in Denmark. The standing light is Alvar Aalto’s 1954 Floor Lamp A810 still in production from Artek. The room opens to a porch that’s one of the house’s best features (and required some of the most complex reconstruction work). 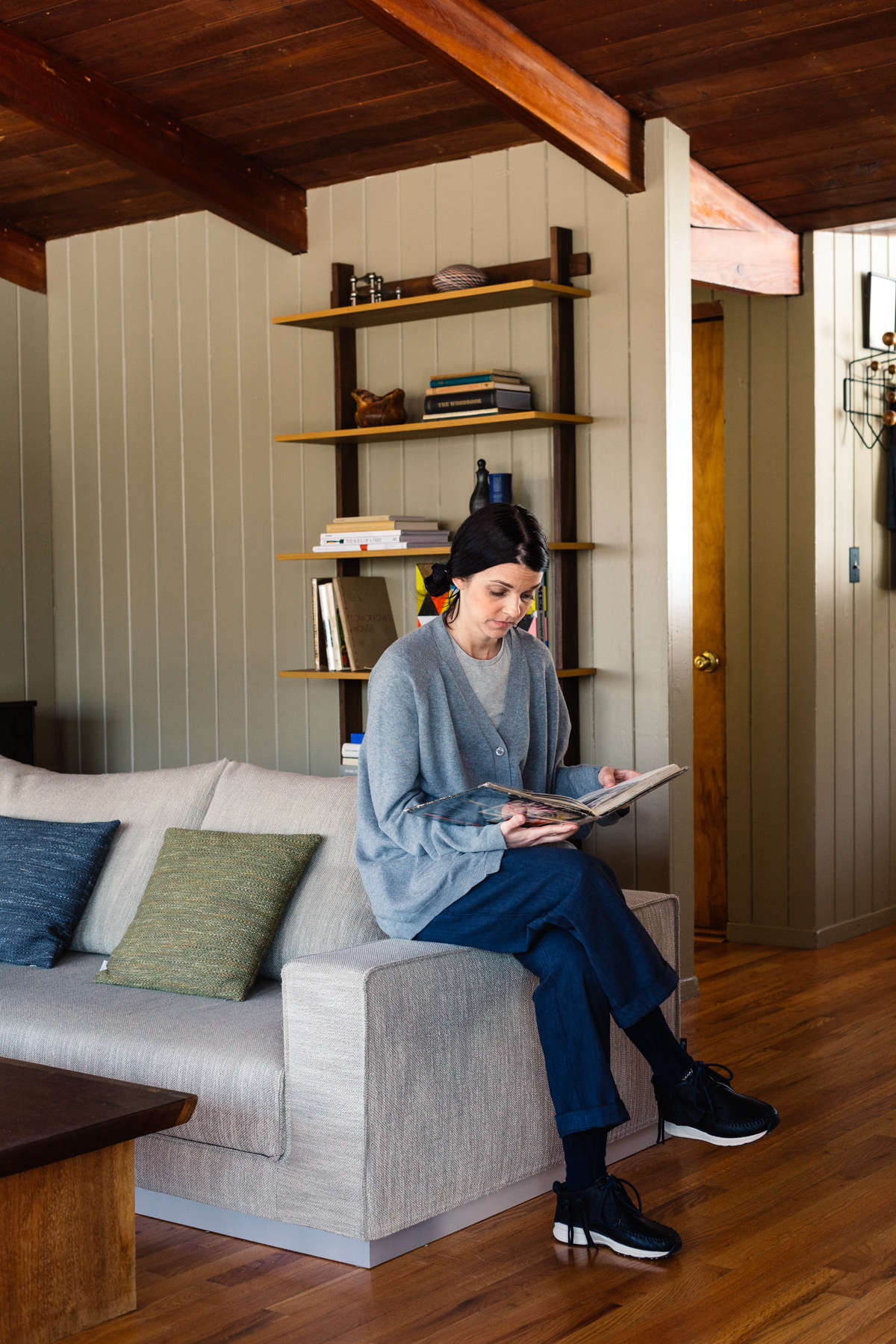 Above: Carla (wearing a Maria Cornejo sweater and VisVim mocs) studies the photos in Quality and Budget Houses, the 1954 book that launched the restoration project. The sofa is the Havana Sleeper from DWR. The floor, she notes, was added by the previous owners: “I’m not sure exactly what happened during the two years they were in the house, but this floor went from being tongue-and-groove cedar to shiny oak—it’s exactly the opposite of what it should be.” Replacing it is on the couple’s wish list. 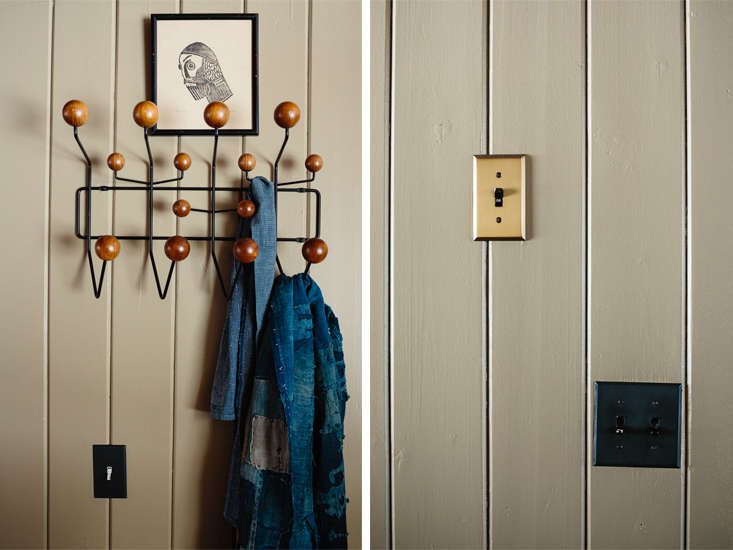 Above L: An Eames Hang It All in the entry. Above R: The new metal switch plates came from Schoolhouse Electric (which seems to have discontinued them); see 10 Easy Pieces: Switch Plate Covers for sourcing ideas. 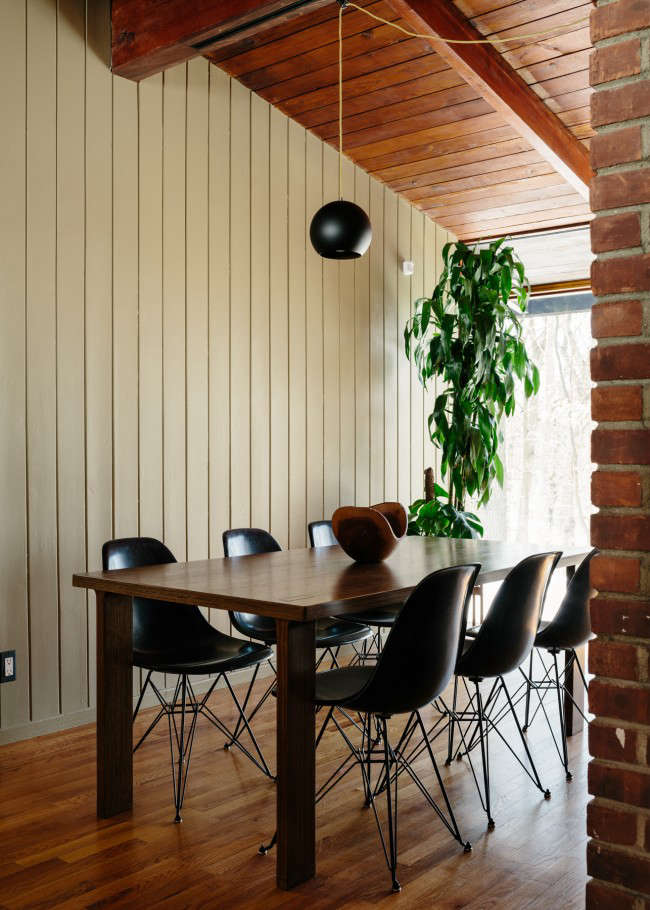 Above: A walnut-stained Tenon table and Eiffel Chairs, both from Modernica, in the dining area. The pendant light is the 1960 Panton Topan VP6 by Vernon Panton in a limited-edition reissue with a gold leaf interior and gold cording. 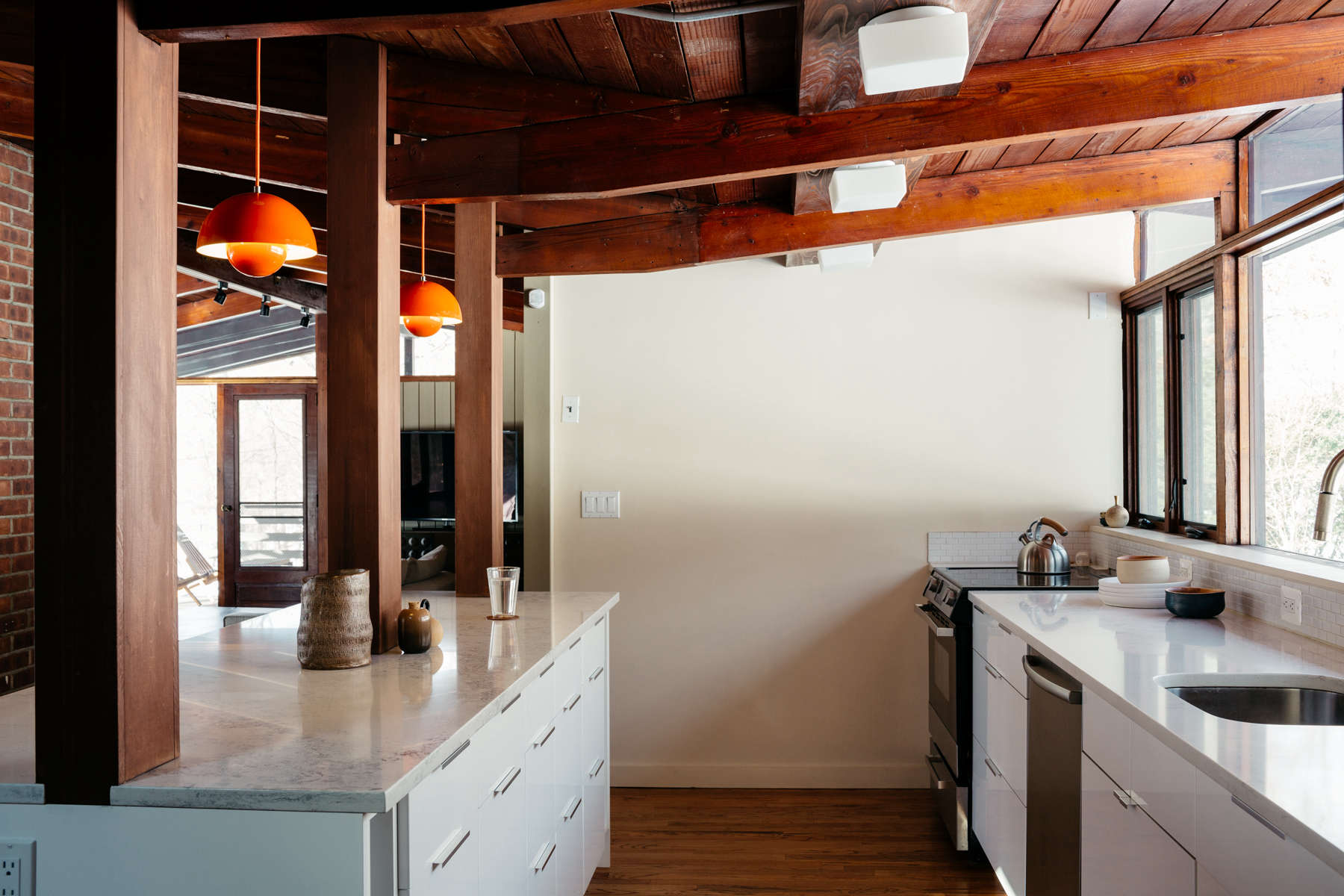 Above: “It’s not a bad kitchen,” says Carla of the Ikea design. “It’s actually nice to work in, but to us, it just doesn’t fit the house.” Niall dreams of replacing it with wood cabinets, which Carla, inspired by the Schindler House, wants to pair with concrete counters. In the meantime, they painted the walls Bone White, the same Frank Lloyd Wright color used on the exterior, and put up aluminum privacy panels in places where the appliances stand in front of windows. 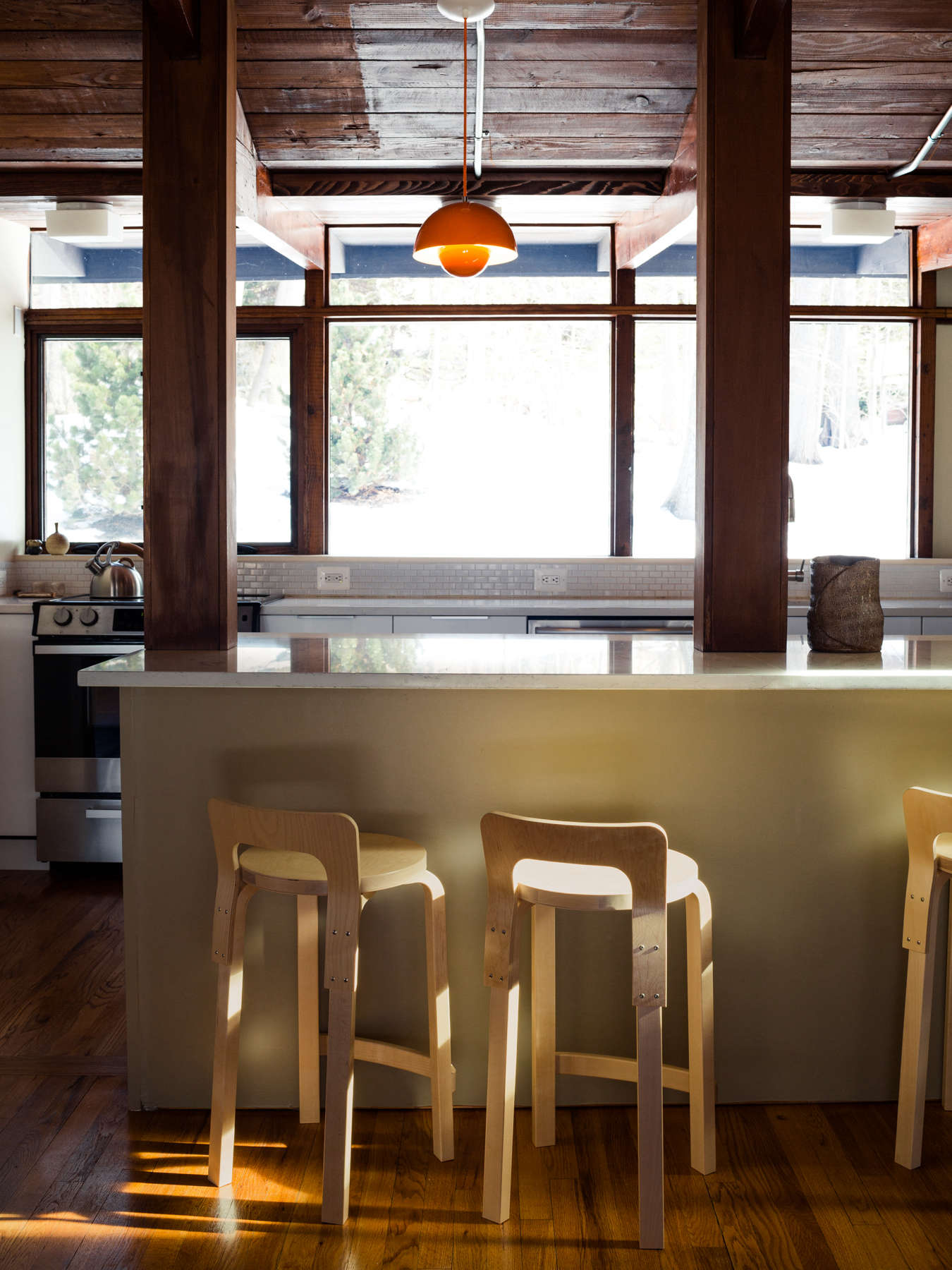 Above: The couple also added new lighting: Vernon Panton FlowerPot Pendants and Matrix Ceiling Fixtures. The stools are Alvar Aalto designs for Artek, which they’ve collected one at a time. 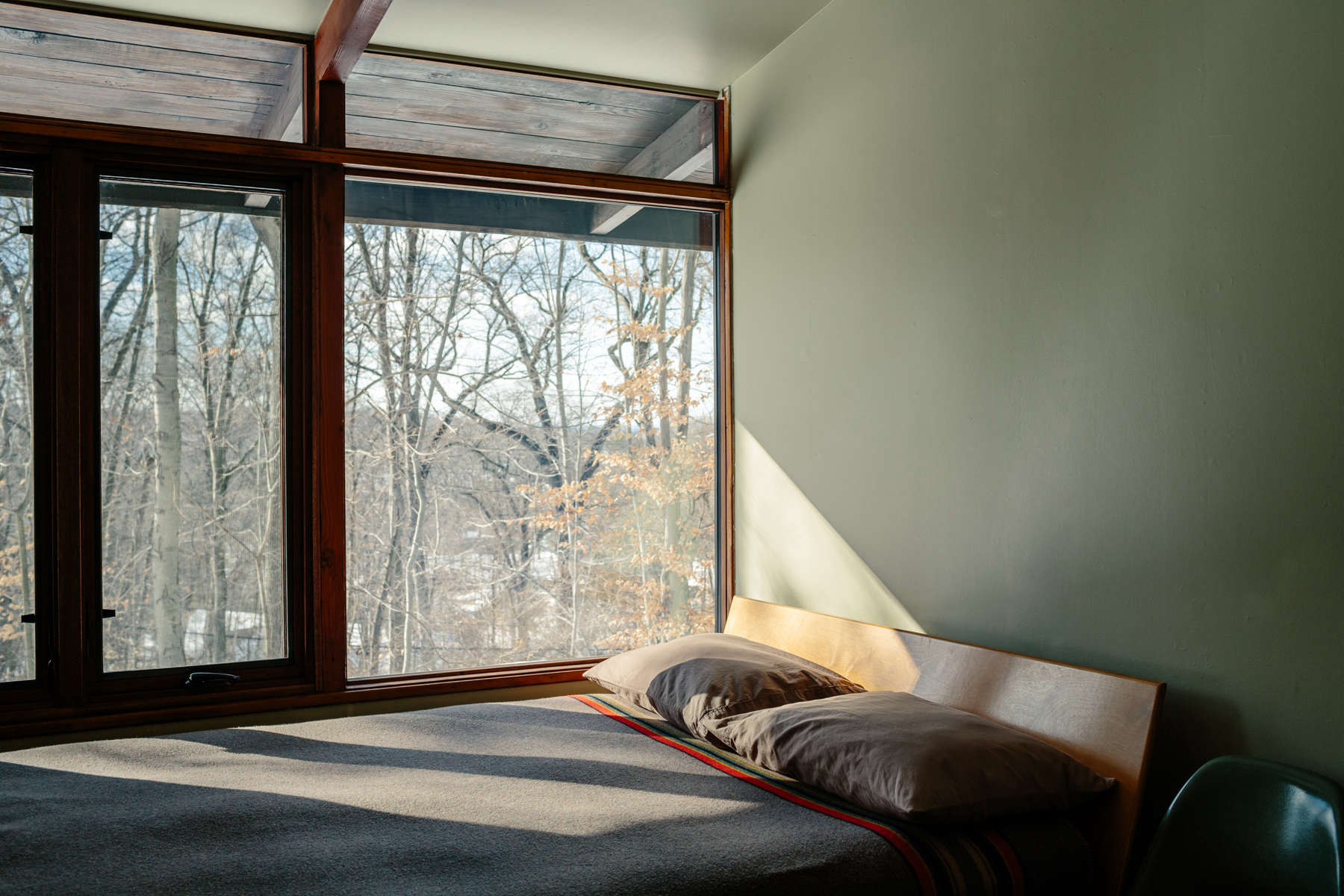 Above: The guest room has one of the best views. The walls here are painted a Behr color a shade lighter than in the living room.

The house’s 75 new custom window panels were supplied and installed by ATM Glass of Westchester: “I drew out a plan for each room with directives and measurements,” says Carla. “We added insulated glass panels with custom bronze spacers to blend with the wood sills (which we finished ourselves—new wood was only added if the old was too far gone). The eight casement windows are Trimline with mahogany frames and oil-rubbed bronze screens.” 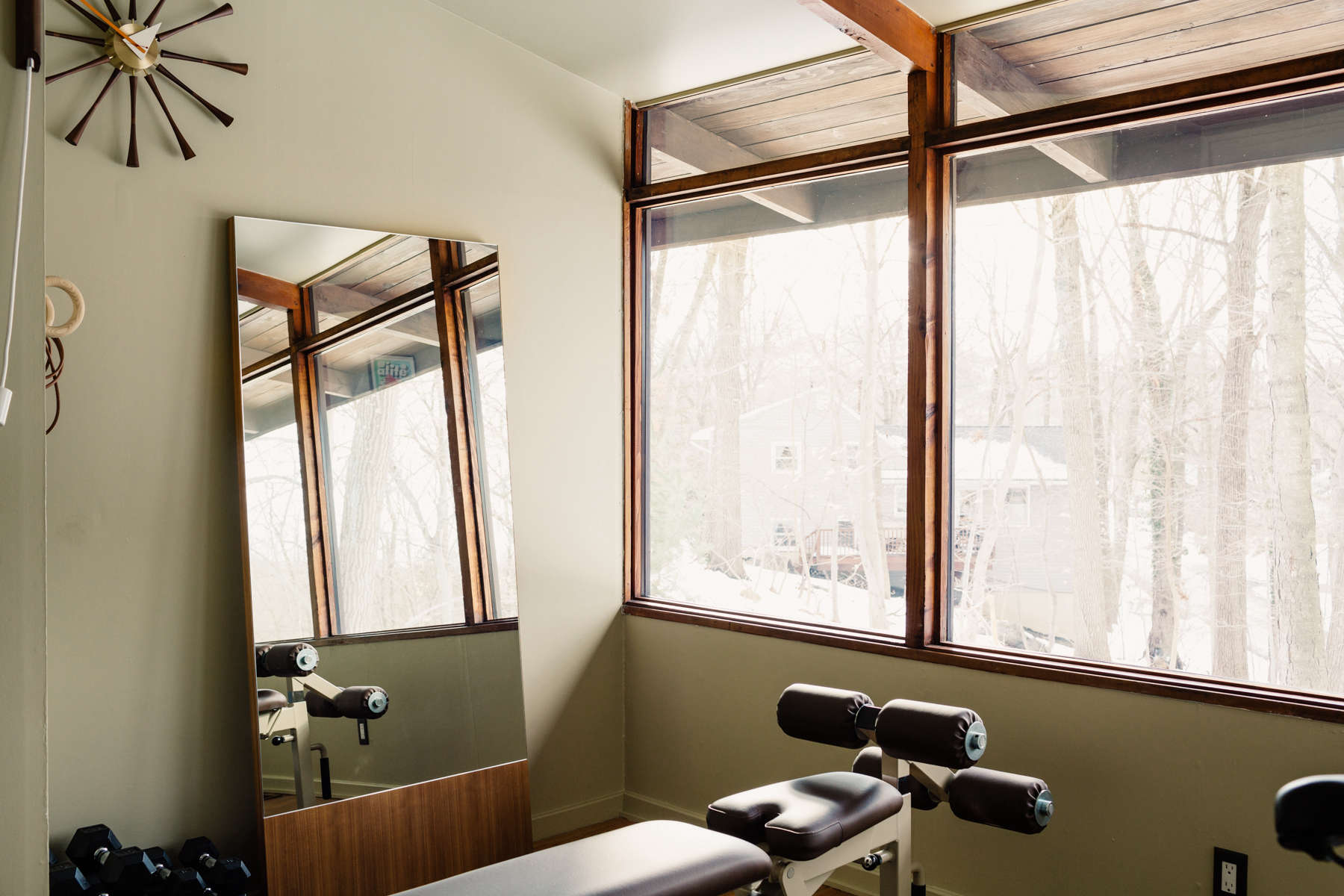 Above: A former bedroom is now the gym. Niall wanted a brown leather bench and found theirs from Bomb Proof, supplier to prisons and the military. The wood-trimmed mirror is the Lean Mirror by Niels Bendtsen. 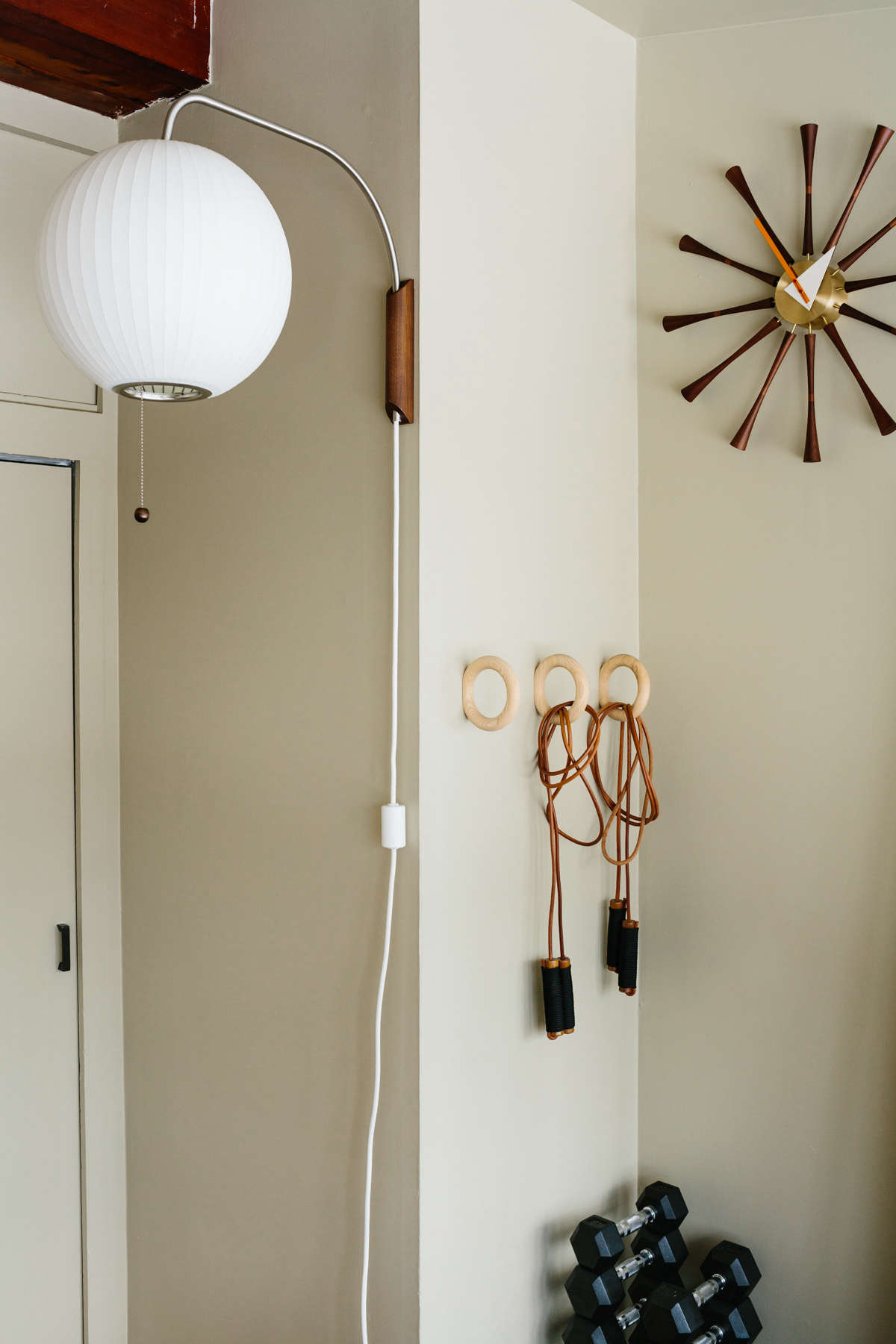 Above: Jump ropes hang from Hay’s Gym Hooks in ash. 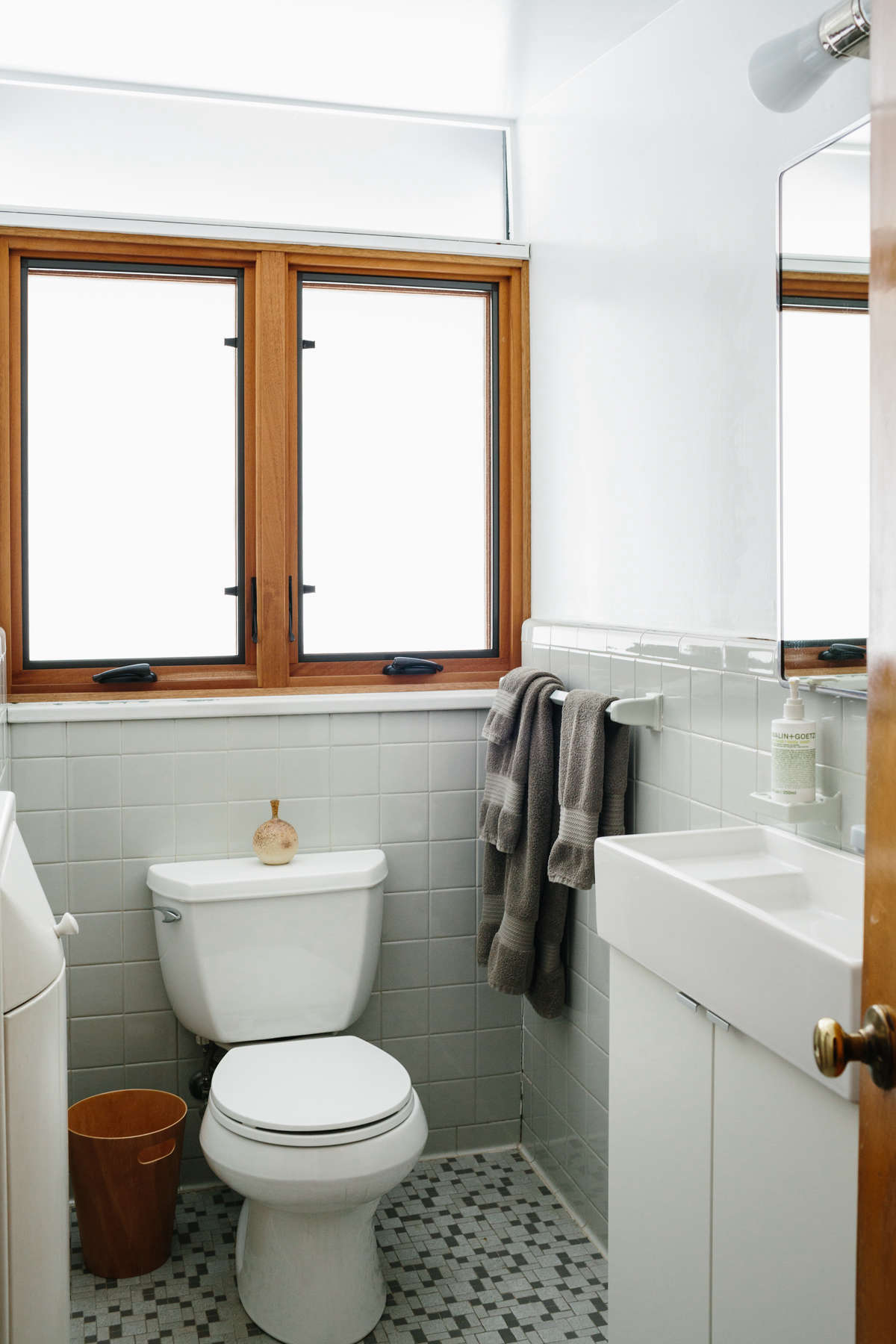 Above: The bathroom is on the upgrade list. It retains its original tiling (“badly regrouted,” says Carla), built-in hamper, and medicine cabinet. The window is new: “We left the mahogany untreated because we’re not sure what we’re going to do with the room. It won’t be brought back to the original, but it will be in keeping with the rest of the house.” 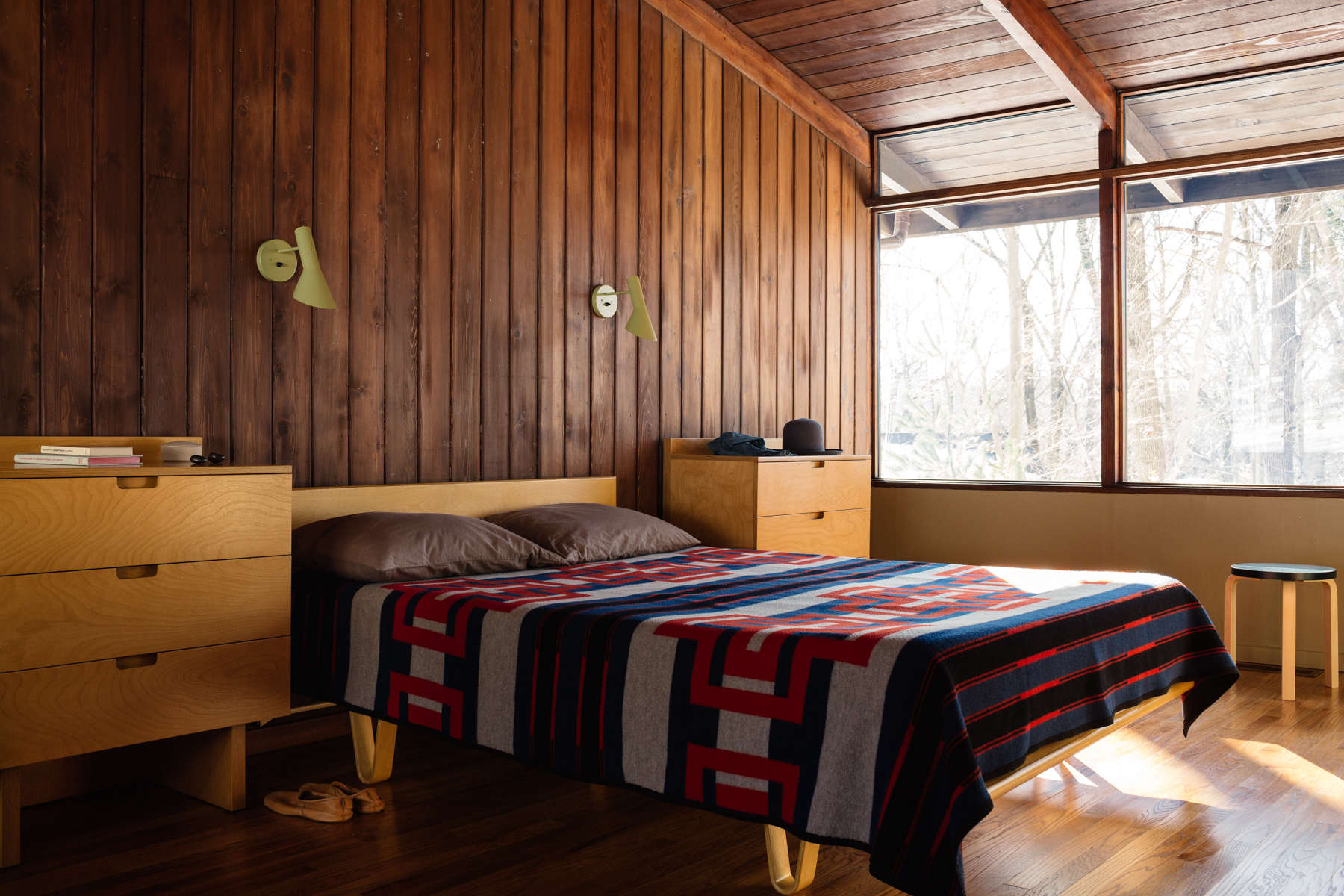 Above: The master bedroom—with restored raftered ceiling (“initially we had no idea what we’d find under the sheetrock”) and cedar wall paneling stripped of white paint—now looks much as it did in the original photos. The bed frame is the Case Study Bentwood Bed with companion chests of drawers from Modernica. The blanket is a Pendleton. 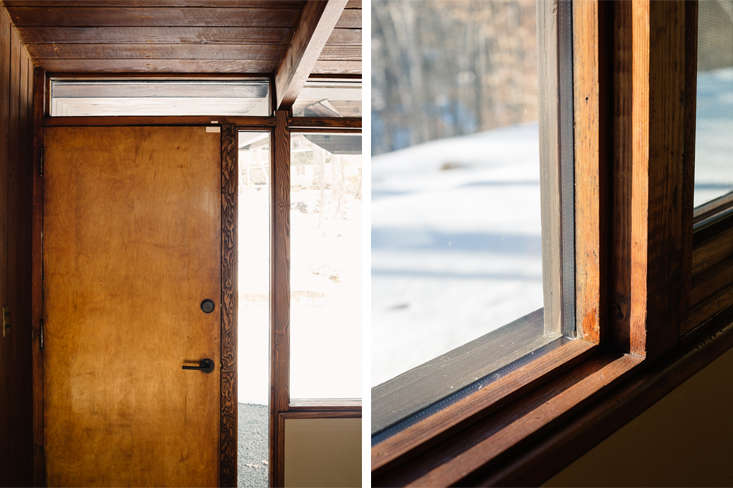 Above L: An original cherry door leads from the bedroom to a side yard. Above R: One of the restored window frames. Says Carla: “The original sills and stops are fir. They were carefully removed and while the glass was placed, I would clean up the wood and stain or paint them depending on whether they were for inside or out. The process took about 10 days.” 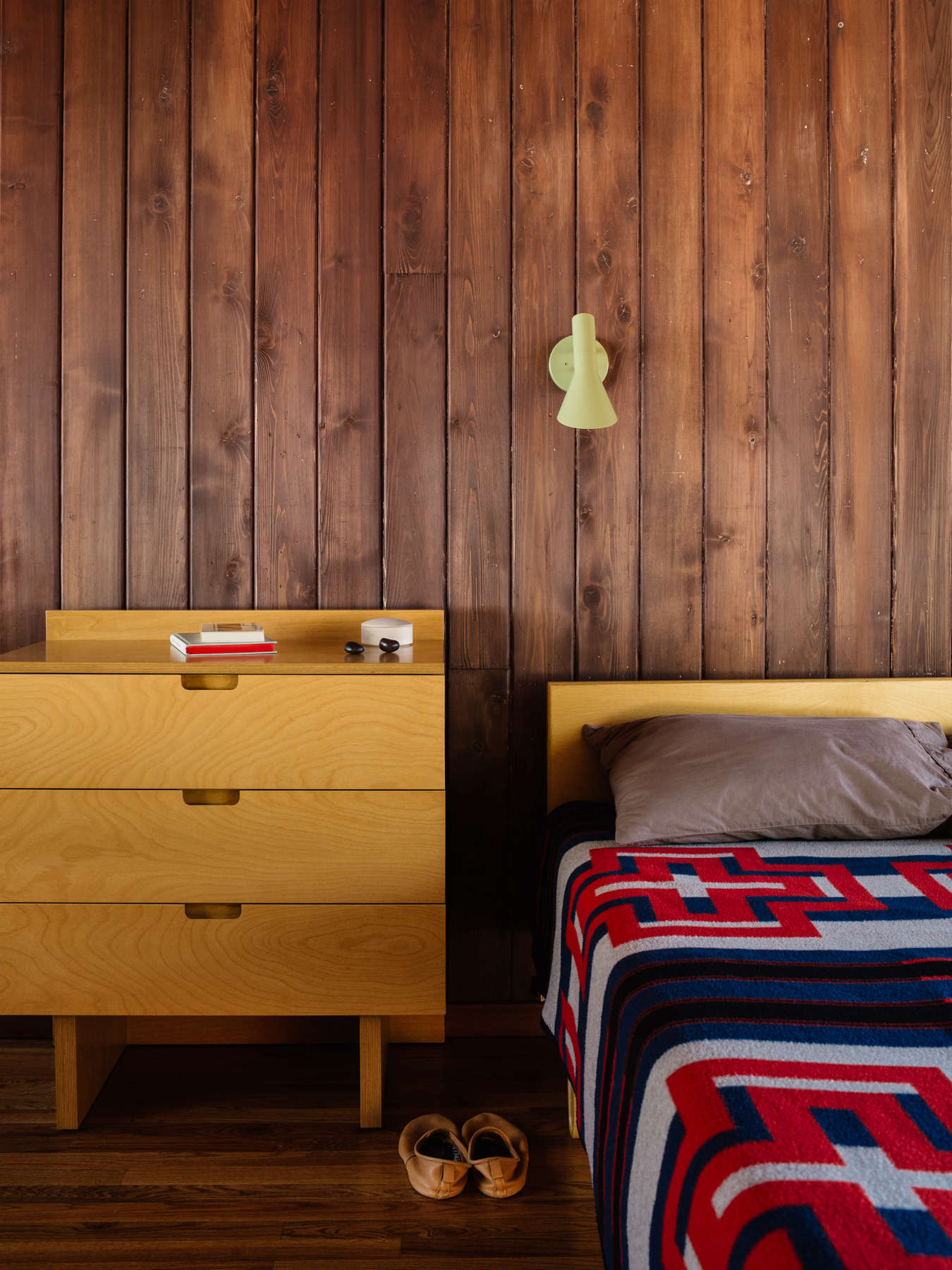 Above: Carla and Niall finished the paneling with Red Oak Minwax and installed AJ Wall Lights by Arne Jacobsen 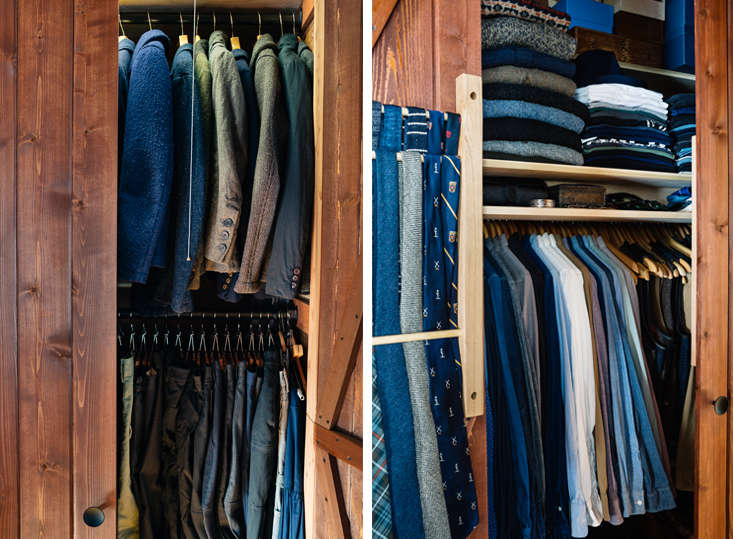 Above: “Anyone who knows midcentury knows the struggle with closets,” says Carla. “We’ve both worked in fashion our entire working lives, so you can imagine the clothing we’ve collected, but we didn’t want to just create bigger closets; instead we used the space smarter.”

In place of “small choppy doors made out of plywood,” the couple added floor-to-ceiling tongue-and-groove paneled cedar. Then they kitted out the tall, narrow interiors with rods and cubbies to suit each of their needs.“Before, there was a lot of dead space and we had to store out-of-season clothes elsewhere. Now, everything has its place,” says Carla, noting Niall’s tie rack (R) and companion belt rack. Since she has more pants than he does, hers hang (L) and his are folded on shelves (R). And the bottom of her closet has enough height to fit boots as well as shoes. 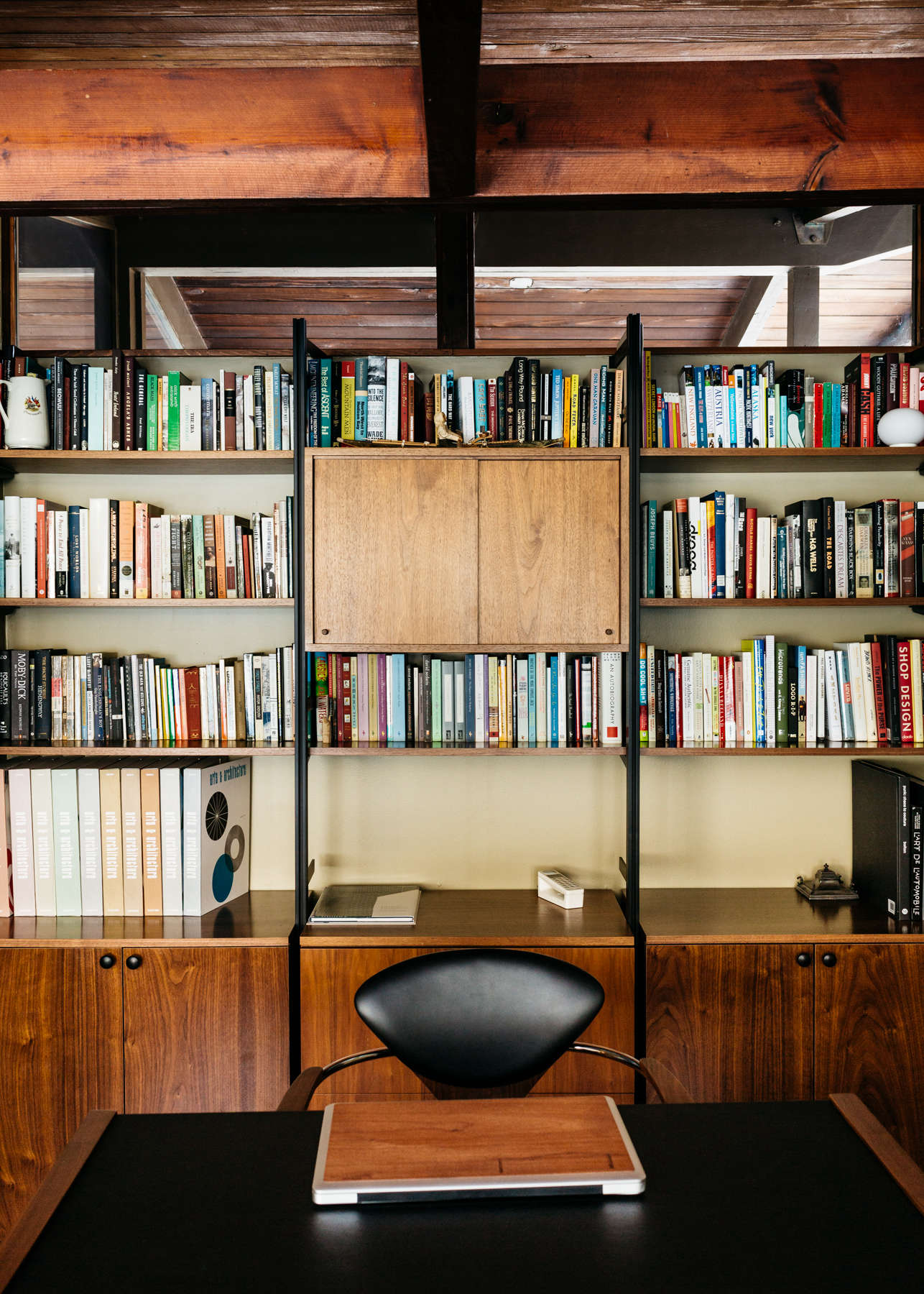 Above: In the library the couple were able to make use of the Rakks shelving from their old apartment to hold their collection of photography, art, and fashion books. They had purchased the system from the Shelf Shop Guy, and he adjusted it and added components without obstructing any of the windows. The desk chair is from Cherner. 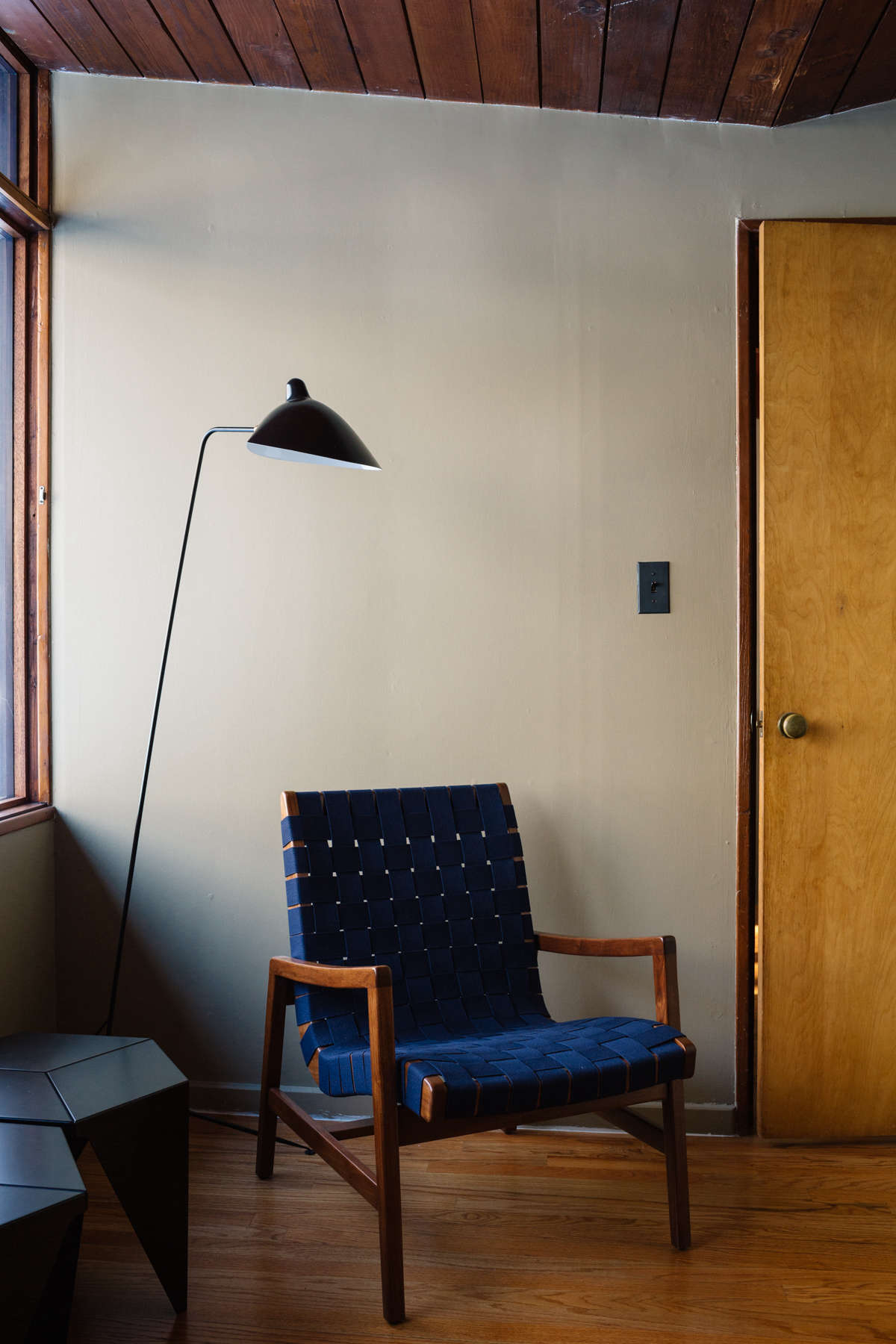 Above: Much like birders, Carla and Niall have long kept a list of midcentury designs they’d love to own. Two they ticked off here: A Jens Risom Lounge Chair and Serge Mouille One-Arm Floor Lamp. 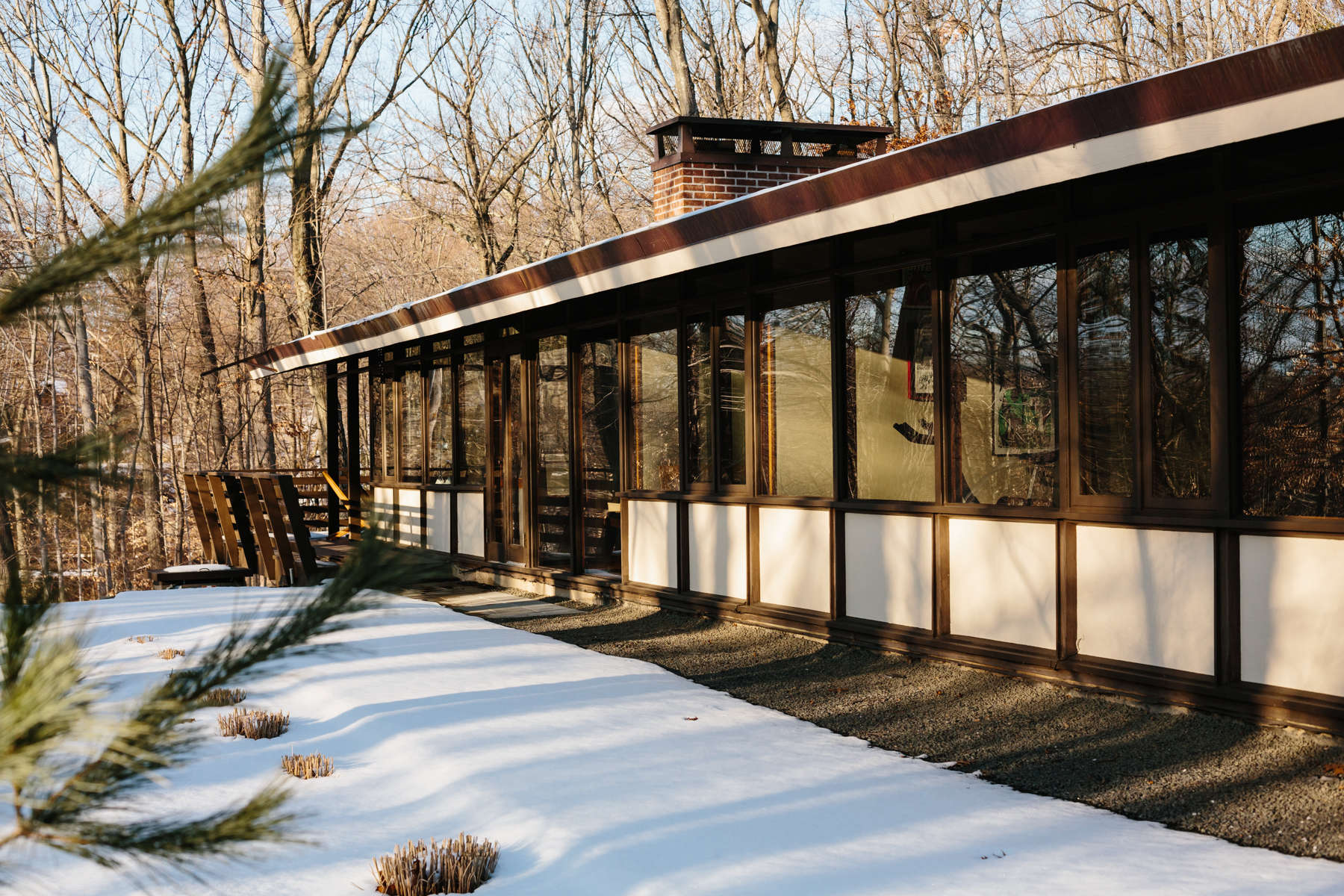 Above: The couple note that here and there they’ve been able to improve on the original. When the obsolete pitch-and-gravel roof was declared at the end of its life, it was replaced with EPDM, a synthetic rubber that’s much more durable. 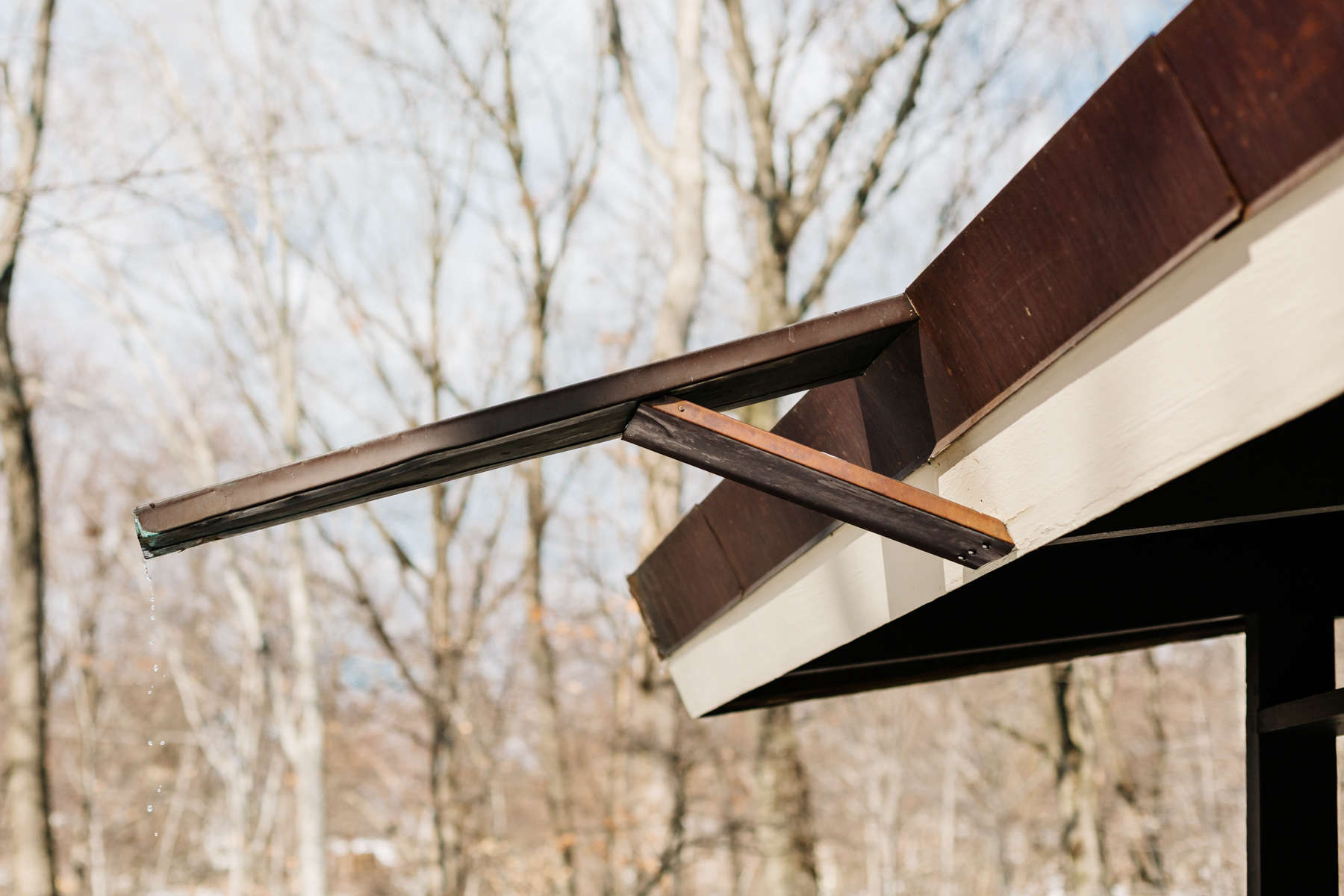 Above: Like the old roof, the new is trimmed with copper—a worthwhile splurge, says Carla—and has its original protruding rain spouts. 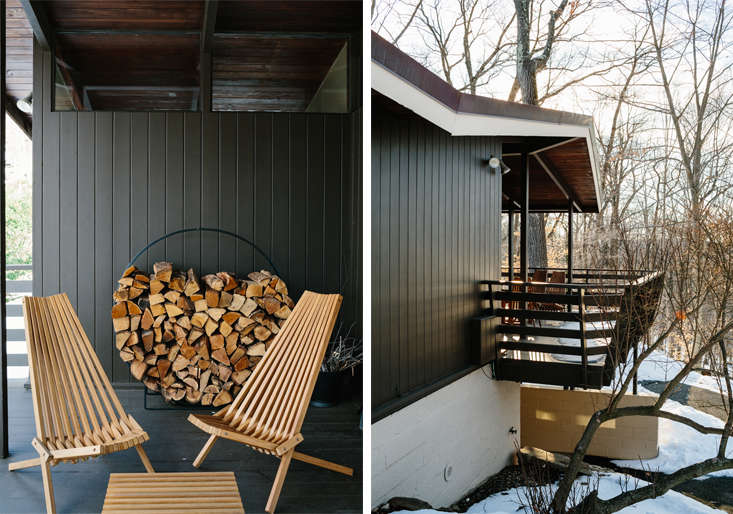 Above L and R: Two views of the porch, which like the interior, had been updated with quick fixes. It now has a new floor of long-length fir, each board pre-painted by Carla and Niall over the course of a memorable weekend. And to make the structure “float again,” as it did in the old photos, a steal beam was added where the porch meets the house. “Suffice to say, it was a big undertaking,” says Carla.”But it was important to get it right.”