Smack in the middle of bustling Colaba–the southernmost section of Mumbai, formerly home to its British quarter–the once touristy district is experiencing a modern renaissance. One of the new businesses cropping up in the area is Abode, a two-story, 20-room hotel in a historic building that pays homage to Bombay’s bohemian past.

Opened last year by Abedin Sham, proprietor of a popular Mumbai sandwich chain, Wich Latte, and business partner of Lizzie Chapman, Abode is housed in the Landsowne House, built in 1910 as the private home of David Sassoon, one of Bombay’s most influential entrepreneurs. Just as the Ace Hotels have seen success in neighborhoods on the cusp of change (notably its recent re-envisioning of the downtown LA United Artists theater), Abode brings a fresh, contextualized design sensibility to the area, a move that is bringing locals (and a different, more style-driven traveler) back to Colaba. A bonus for travelers? Abode’s most luxurious room is priced at about $175 USD, scaling down in price and luxury from there.

Photographs by Prarthna Singh courtesy of Abode, unless otherwise noted. 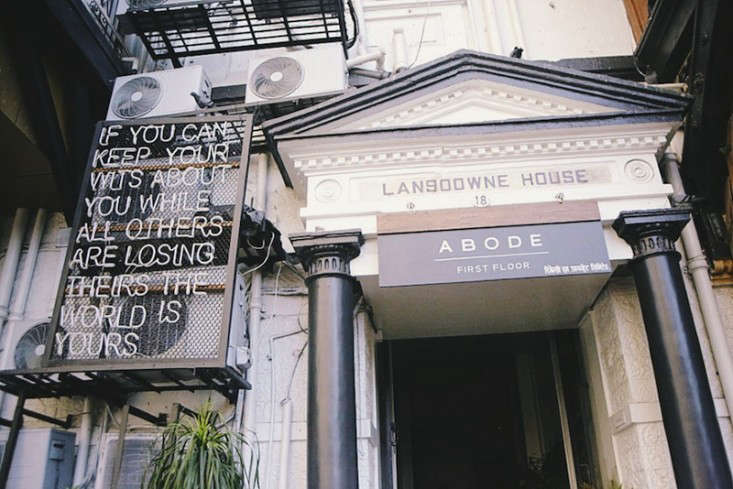 Above: The street entrance to Abode features a neon light installation that quotes Bombay native Rudyard Kipling. Photograph by Anushree Gavas of Serendipity. 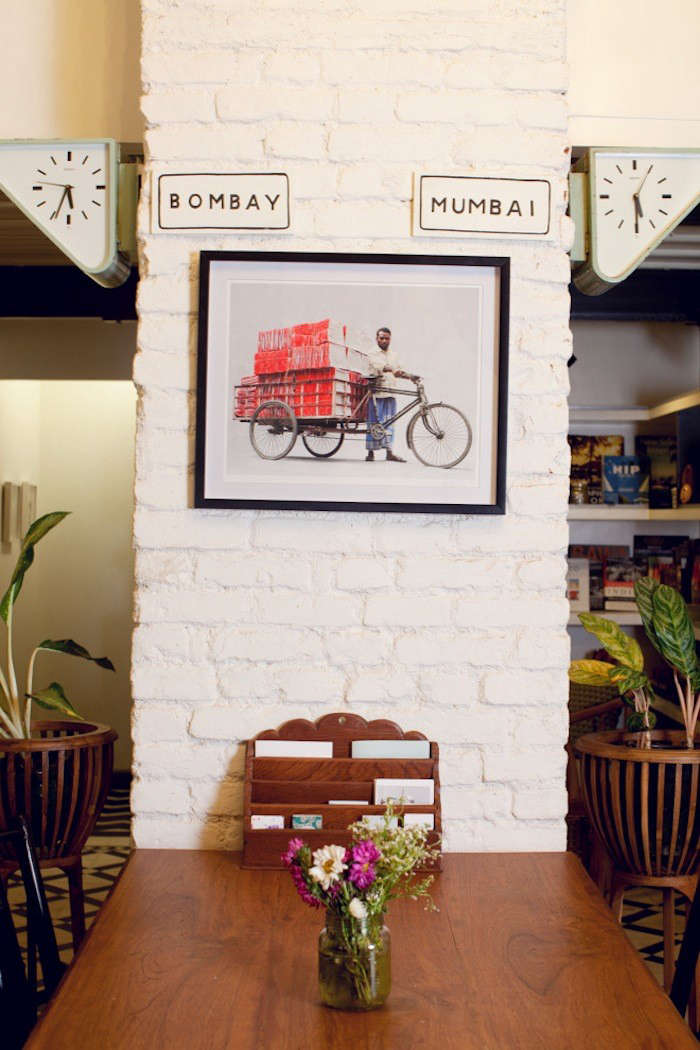 Above: The hotel did away with the idea of a traditional reception desk, allowing the space to function more as a café and community space. 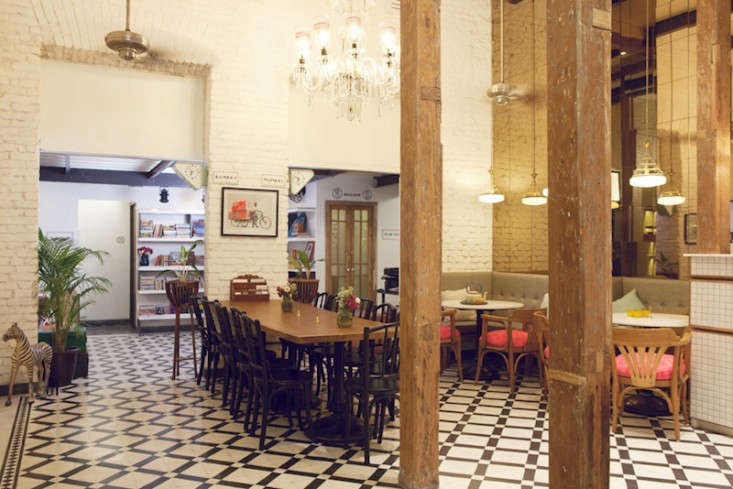 Above: The hotel’s interior design was executed by Sian Pascale who first tackled the lobby by restoring the wood and iron faí§ade around the original 19th century chandelier. The handmade patterned cement floor tiles are a custom design from Bharat Tiles, a family-run business that’s been making bespoke, intricate flooring for nearly a century. 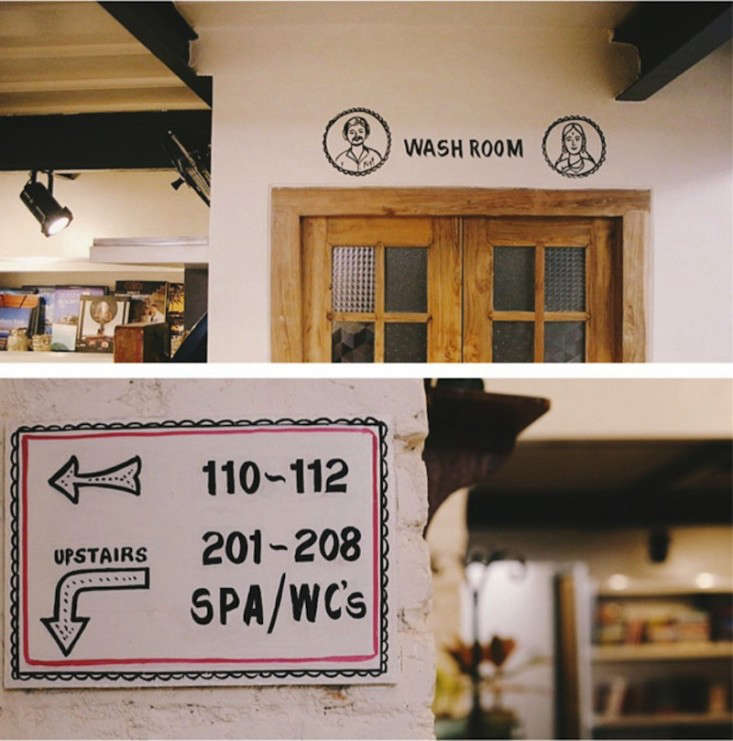 Above: Pascale enlisted the creativity of British graphic designer Katy Buckley, who in turn worked in collaboration with local truck painters. The result is a mix of graphic work (as seen on the exterior of Abode) and hand-drawn signage (as seen here). Photograph by Anushree Gavas of Serendipity. 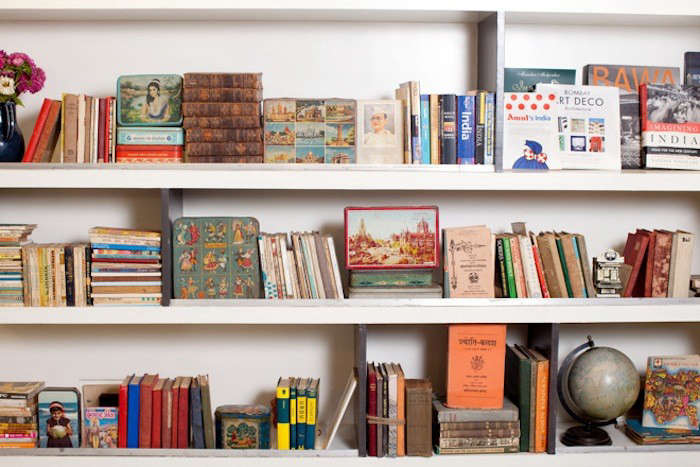 Above: The hotel’s library off the lobby is, as Pascale explains, “somewhere you can sit, relax, and have a chat with other travelers and locals over a cup of chai; a home away from home.” 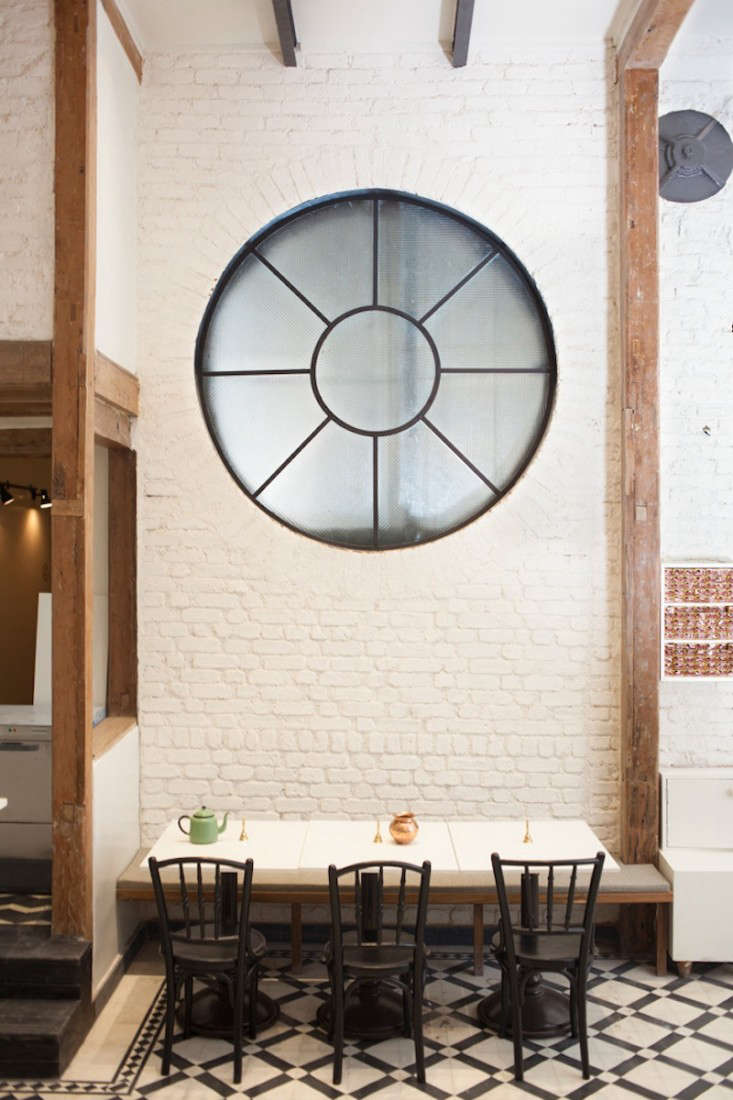 Above: “The original lobby space was completely landlocked, so a round steel window was created, echoing the shape of the original iron girders that are scattered across the building, opening the lobby up to natural light that came in through the lift shaft,” says Pascale. Photograph by Roberto Michel via Sian Pascale. 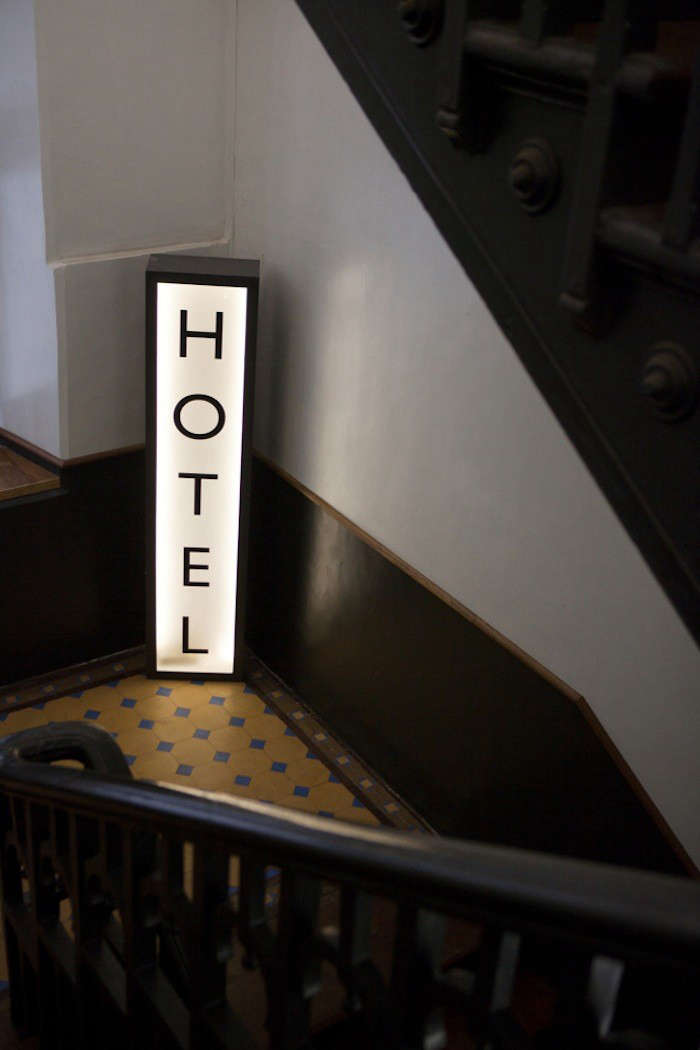 Above: The existing tiles in the stairwell were left untouched, just slightly restored, and a custom Hotel light box was added for illumination. 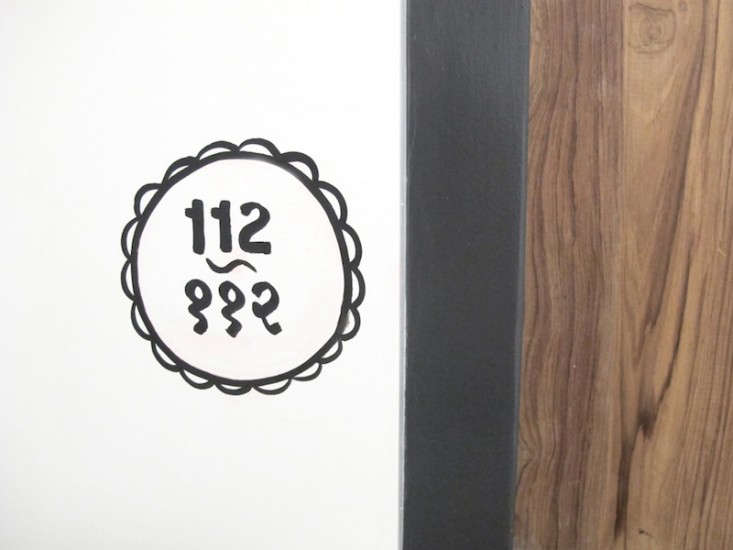 Above: Room numbers are hand painted in both English and Marathai, the local language. 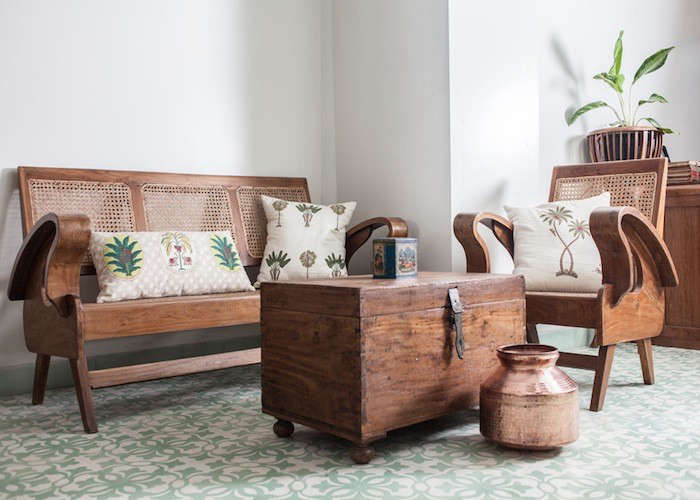 Above: A seating area in a bedroom suite features vintage wicker furniture sourced from the markets of Mumbai.

Above: The Bhel Puri Bedside Tables designed by Pascale’s studio, Young Citizens Design, are inspired by the stands of Bombay street vendors. Also by the studio, the Bhel Puri Wall Lights are made from locally sourced elements, including black powder-coated aluminum, wooden wall mounts, and black-and-white cording. The collage of photos offer views of the city. 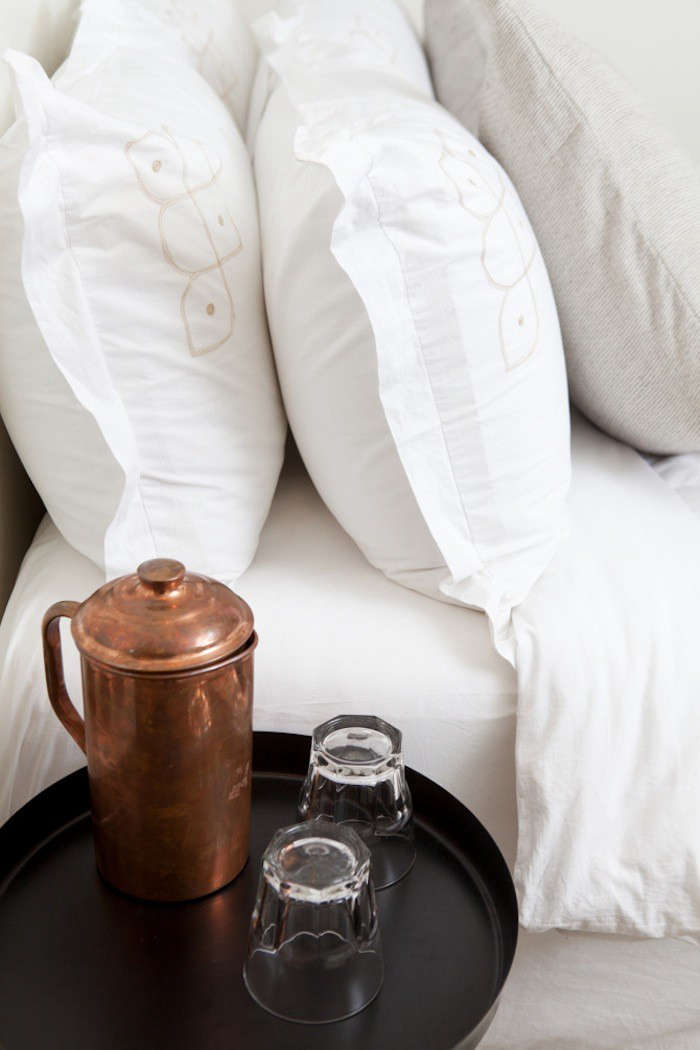 Above: An antique copper carafe adds an old-world note to a crisp white bedroom. 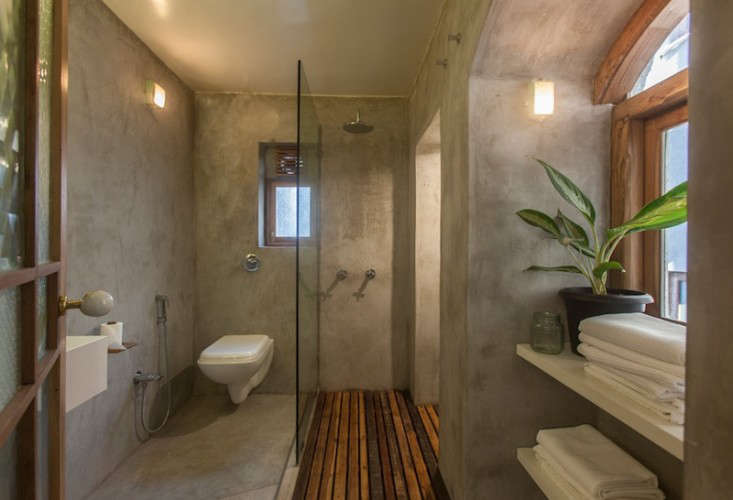 Above: The bathrooms are fully modern and have rainwater showers lined with slatted wood floors; the walls are made from Indian patent stone, a type of poured-in-place, polished concrete. (To learn more about concrete, see our Remodeling 101 posts on Polished Concrete Floors and Countertops.) Photograph by Roberto Michel via Sian Pascale. 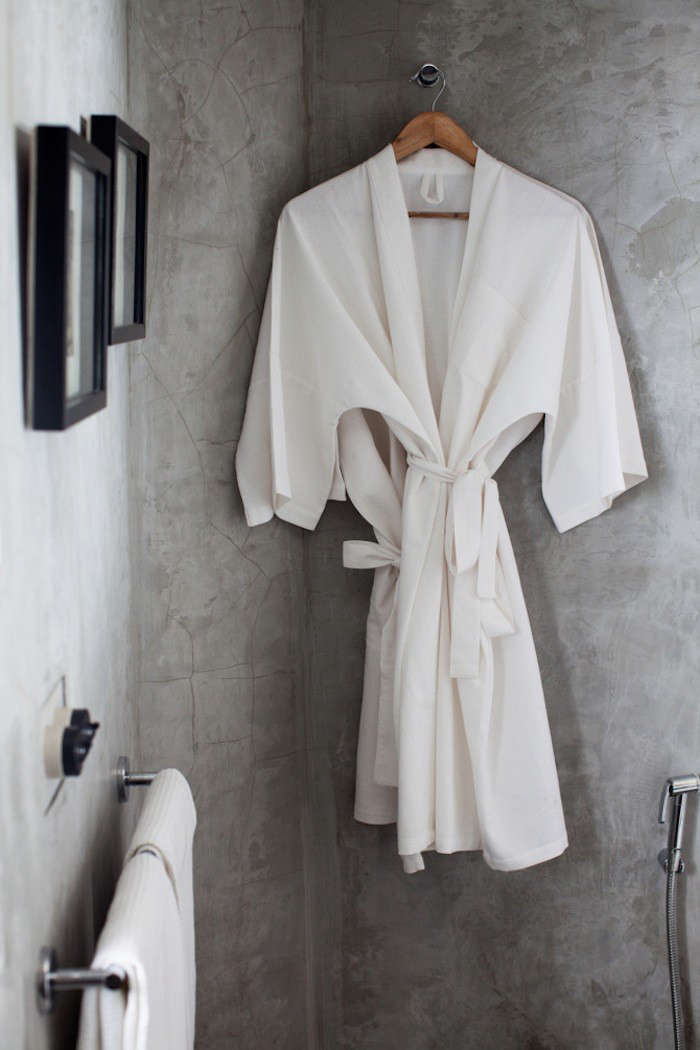 Above: Guest robes made of locally sourced cotton hang in the bathrooms. 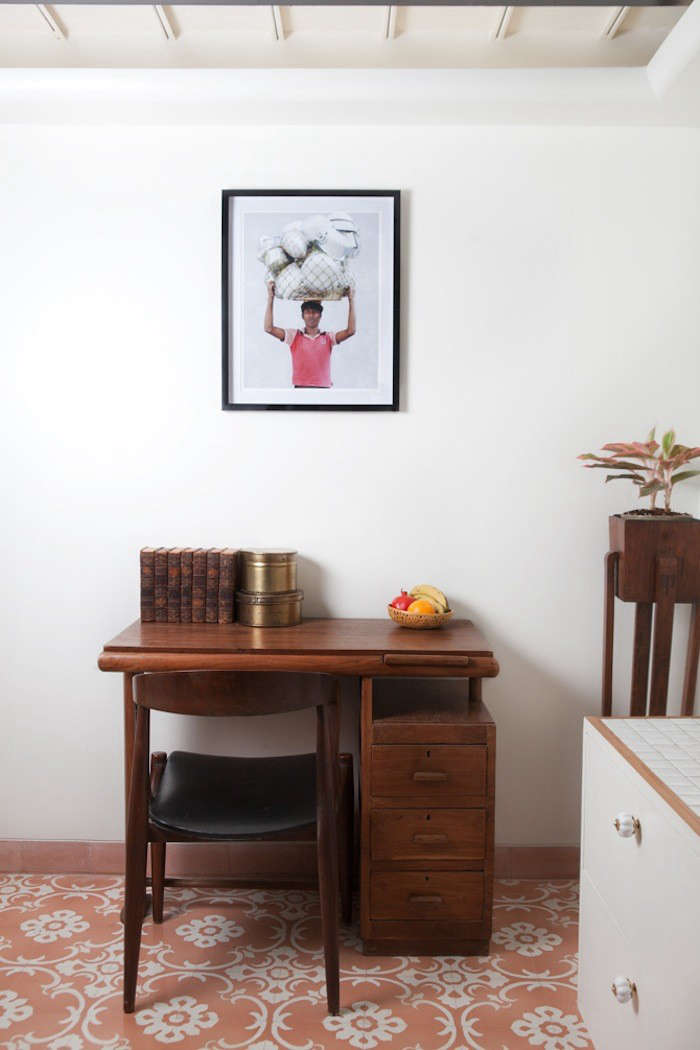 Above: Some of the larger rooms at Abode offer up restored vintage Indian writing desks. 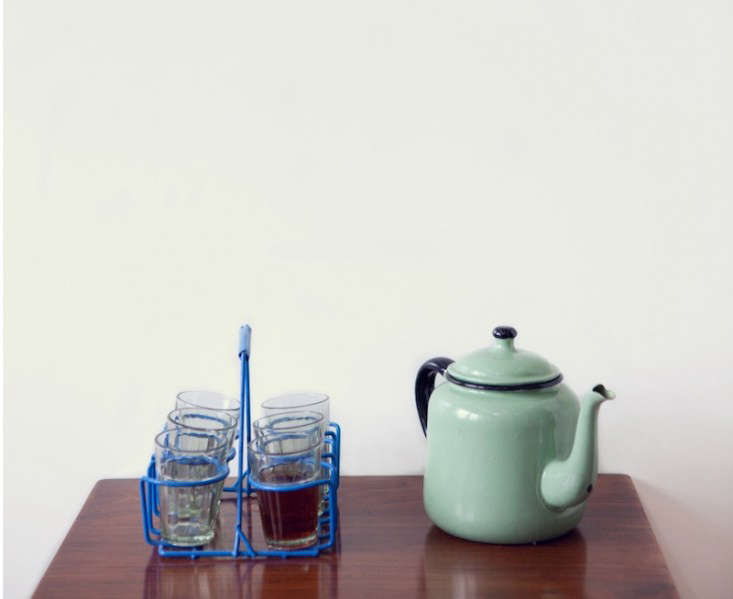 Above: Tea service in the lobby includes colorful enameled teapots and tea glasses in a traditional metal holder. 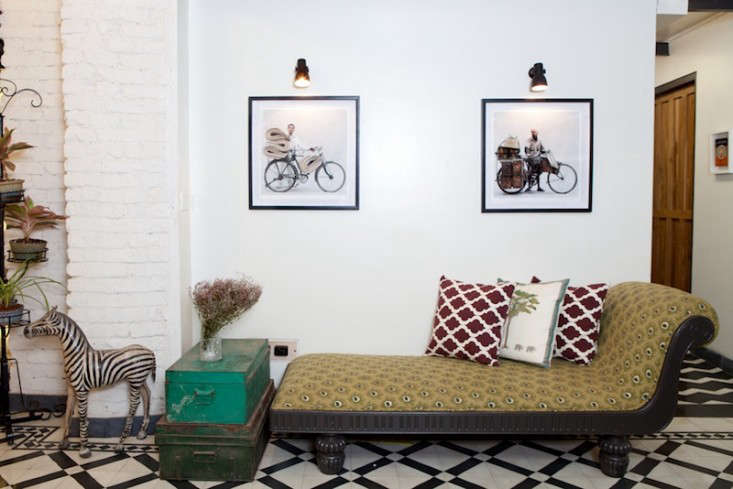 Above: The hallways are outfitted with 20th-century colonial and art deco hardwood furniture.

For more details and reservations, go to Abode.

For a South African hotel that evokes the same era, see A Guesthouse That Channels the Spirit of Ghandi. Go to our Hotels & Lodging directory for more ideas. And for a recipe inspired by the Indian landscape, visit DIY: Rose Petal Honey on Gardenista.