In a small London mews house (a former stables with living quarters above), architecture firm Jonathan Tuckey Design was asked to maximize both storage and living space. The challenge came from someone well accustomed to small-space living: the owner formerly worked on a submarine (leading the architects to dub the project the Submariner’s House).

Tuckey’s response to the three-story Victorian’s proportions was simple: introduce an open stair and built-in storage. Pushed against a wall to create as large a floor plate as possible, the new stair lends its voids to the primary spaces on each floor as it connects them vertically, from new basement to roof terrace. Walls of cupboards, designed to be seamless with the architecture, further maximize the efficiency of the setup. If this is submarine living, we’re on board. 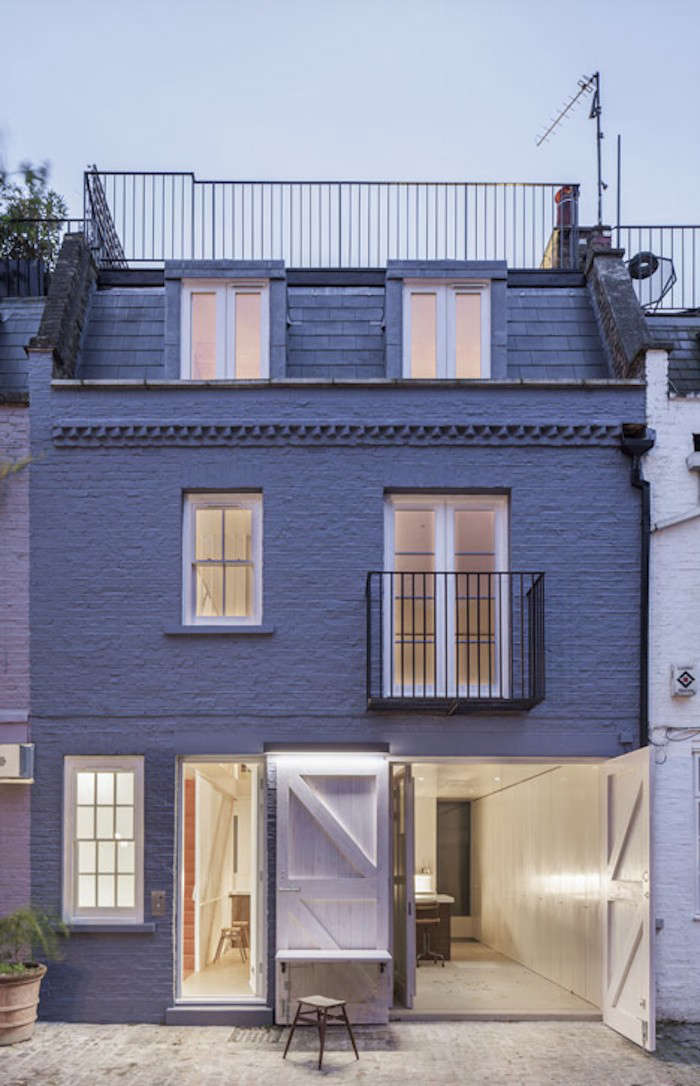 Above: The late Victorian faí§ade is well preserved. In the summer, the original stable doors open the ground floor to the cobblestone street of the mews. 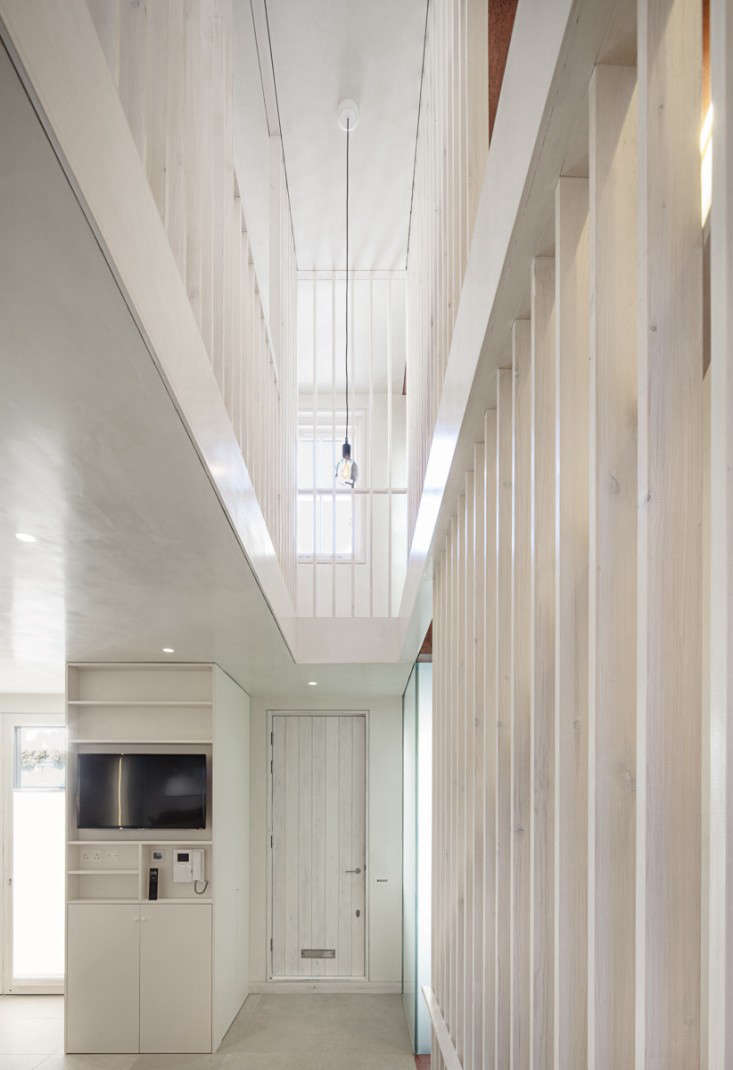 Above: The open three-story stairwell is dramatically on view in the entry, which has a small command station, with television and outlets, just beyond the front door. 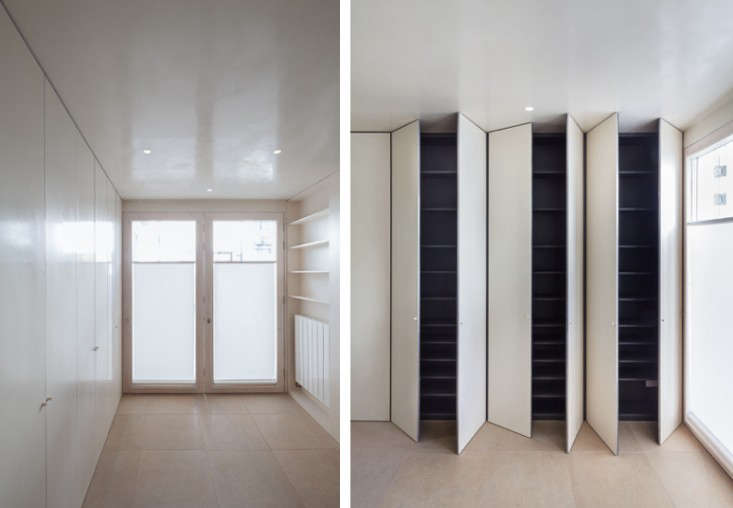 Above L: Built-in floor-to-ceiling cupboards run the length of the ground floor kitchen and dining room. Above R: The cupboards are lined with shelving of black MDF. 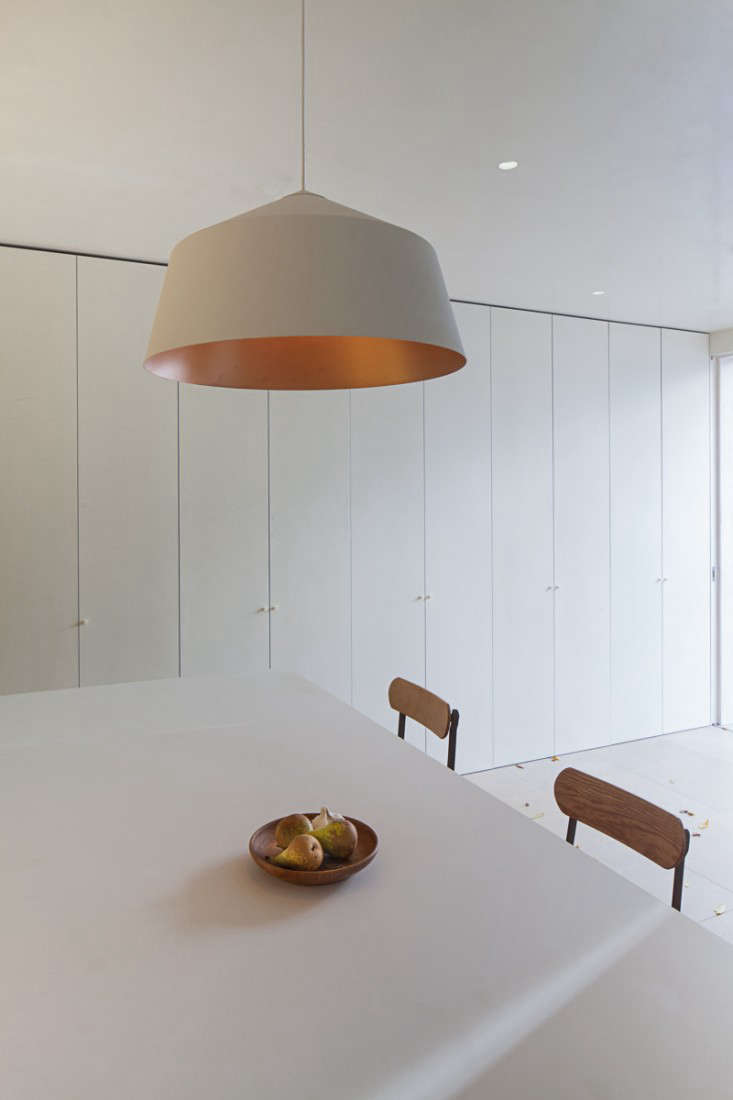 Above: A copper-lined pendant brings warmth to the white kitchen and dining room. 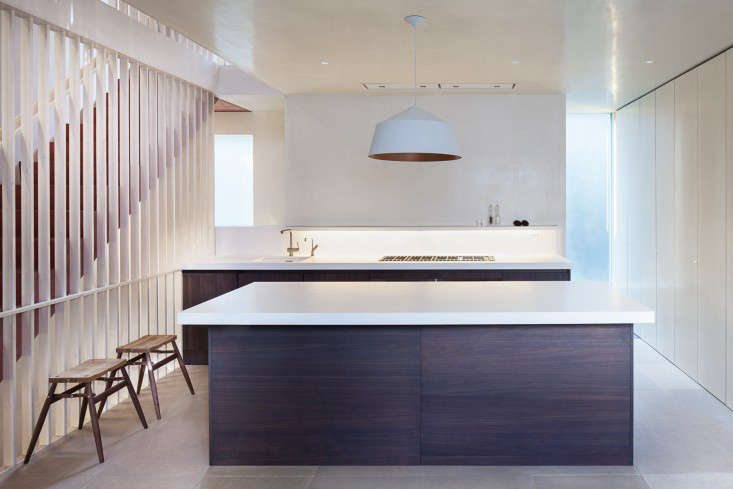 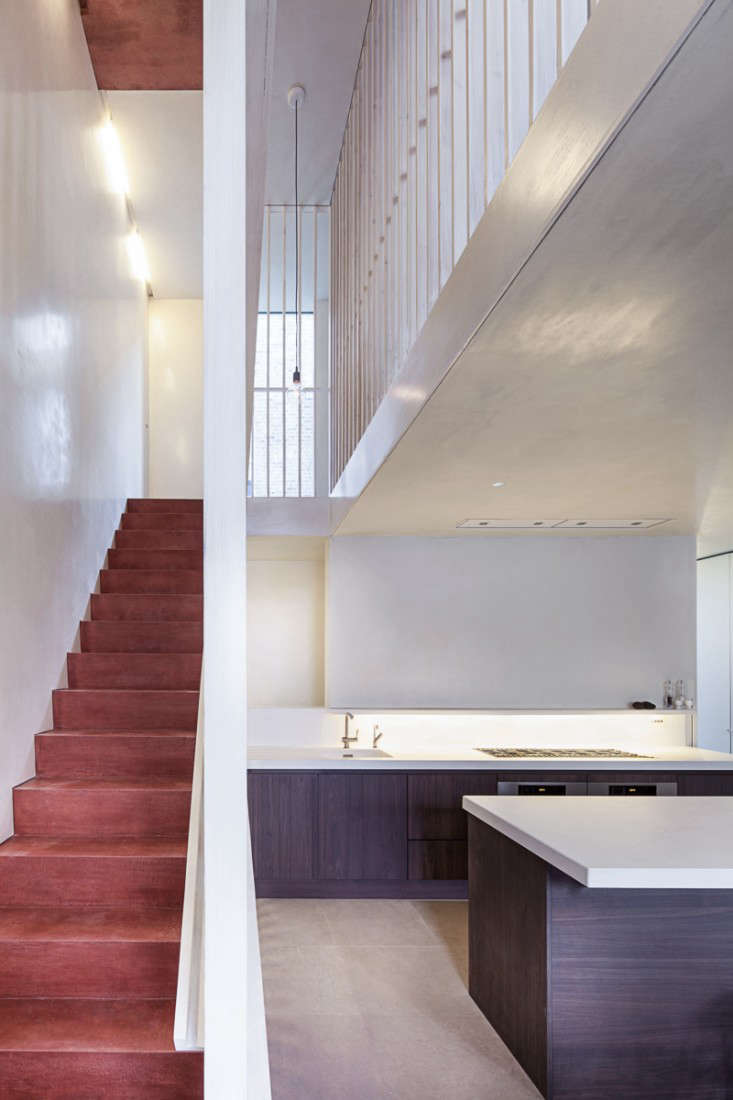 Above: The stairs are made of red concrete and run along the far wall. The overhead void of the stairwell lends the kitchen an unexpected feeling of expansiveness. 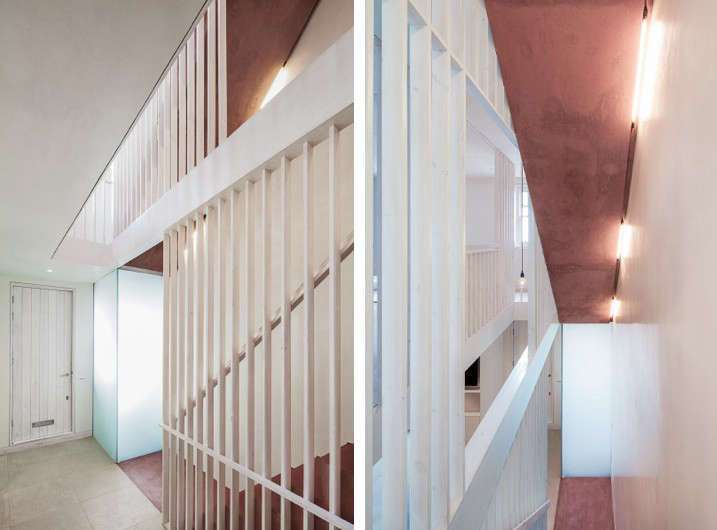 Above: The red stairs run like a ribbon through the house, while the stair slats “act as both balustrade and room divider,” say the architects. 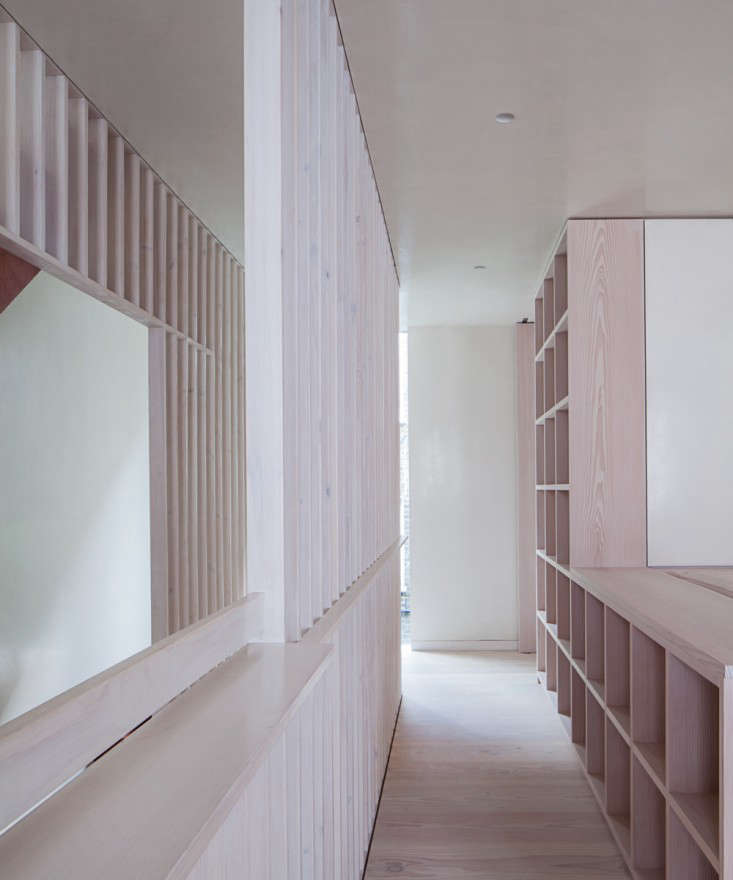 Above: On the living room level (the second floor), the stairwell sits between the lattice screens. 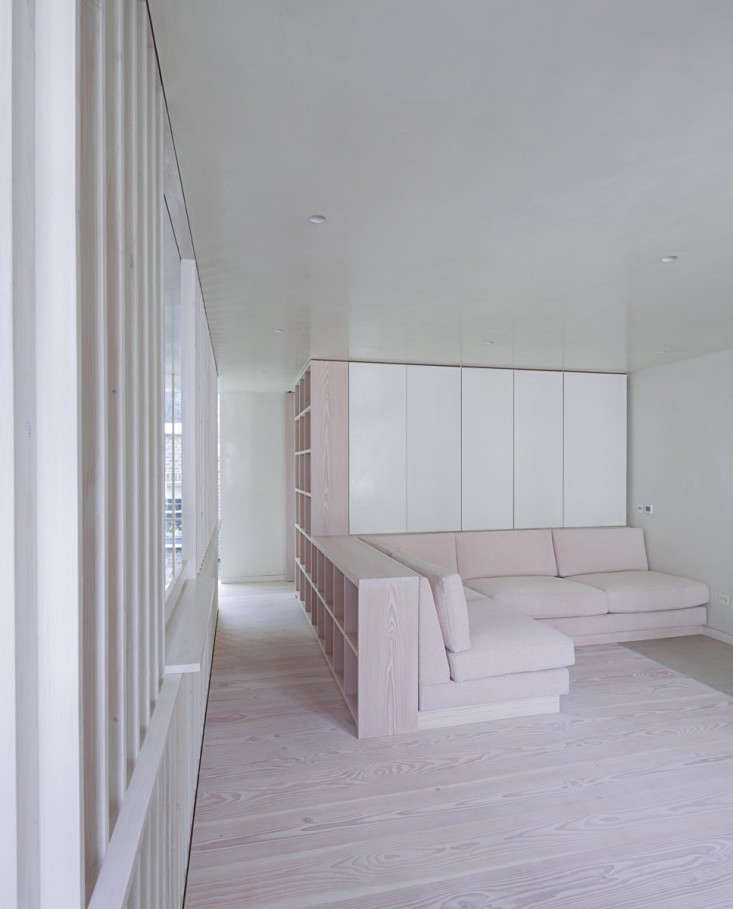 Above: The living room sofa is built into cabinetry and bookshelves. 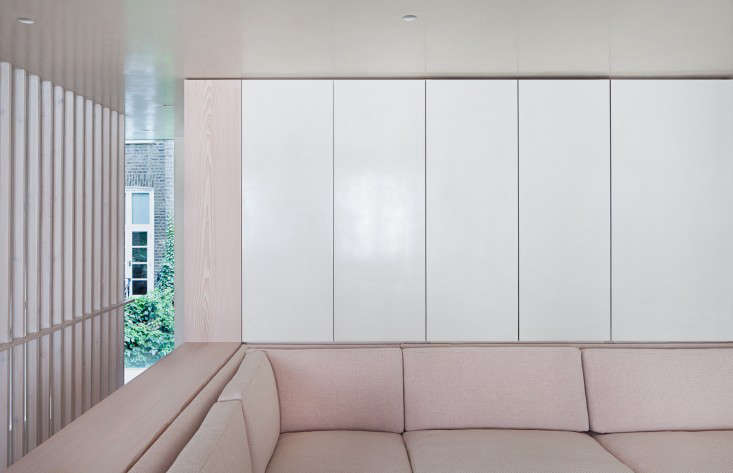 Above: Natural daylight, which comes into the stairwell from a floor-to-ceiling frameless window at the rear of the house, adds to the feeling of expansiveness in a small space. 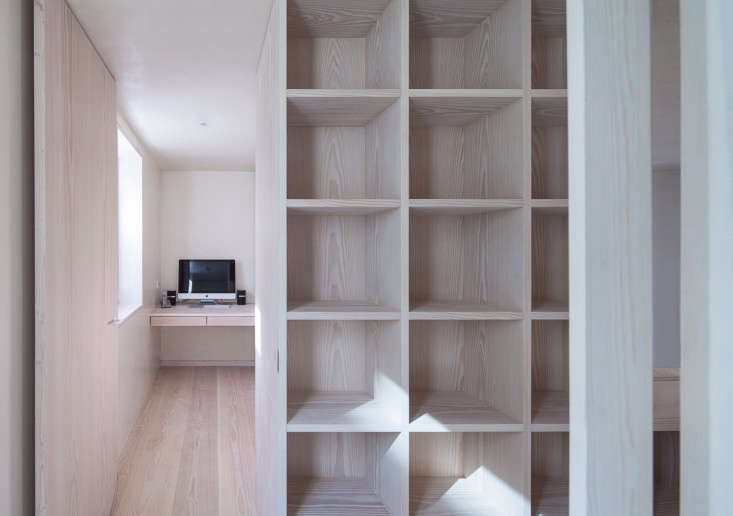 Above: An office is tucked away in the back corner of the house behind the built-in sofa and shelving. 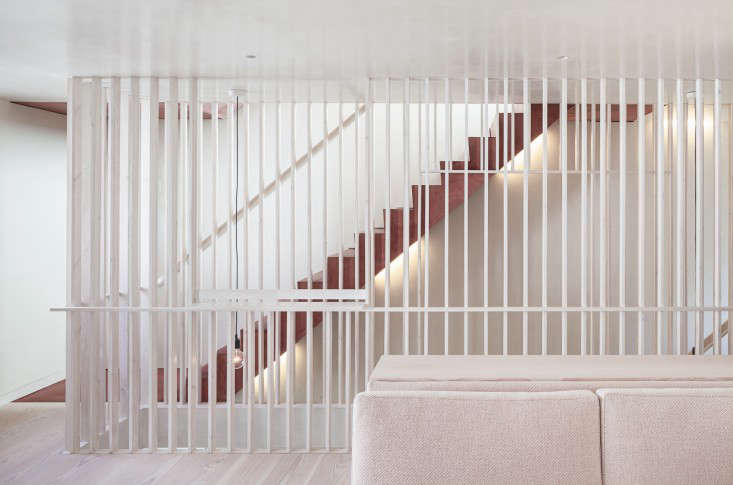 Above: The lattice rails and cement stair provide a visually interesting background to the living room while keeping the space open.

Above: On the top floor, a wood-lined bedroom rests under the eaves. A pocket door can slide out for privacy. 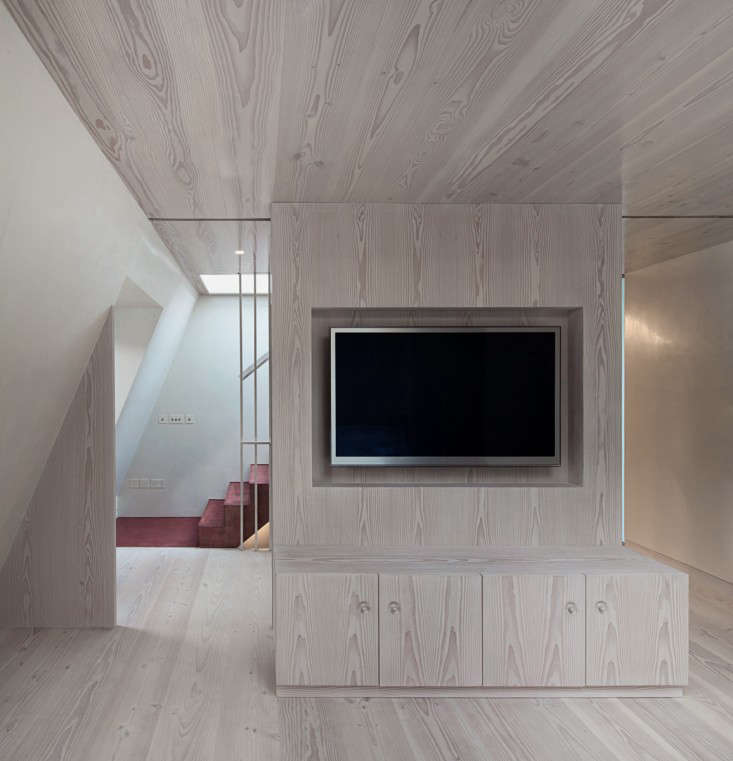 Above: A television is built into a bedroom wall. 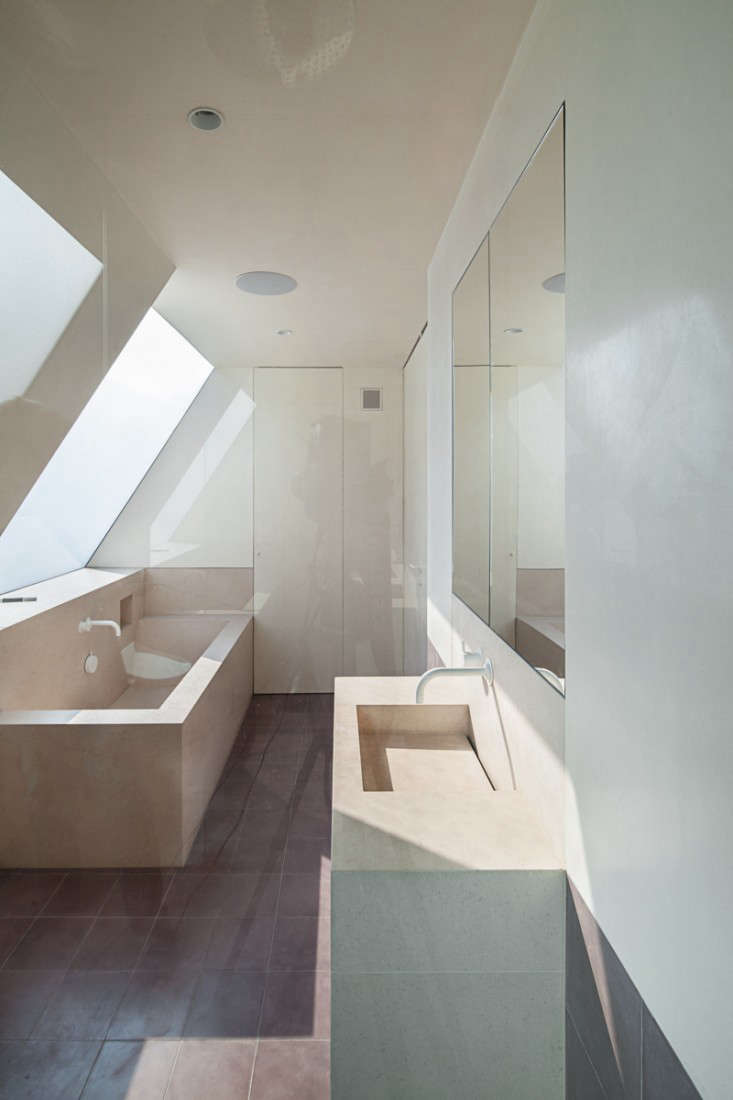 Above: The connecting bathroom, with limestone bath and sink, runs along the rear of the house under the eaves. 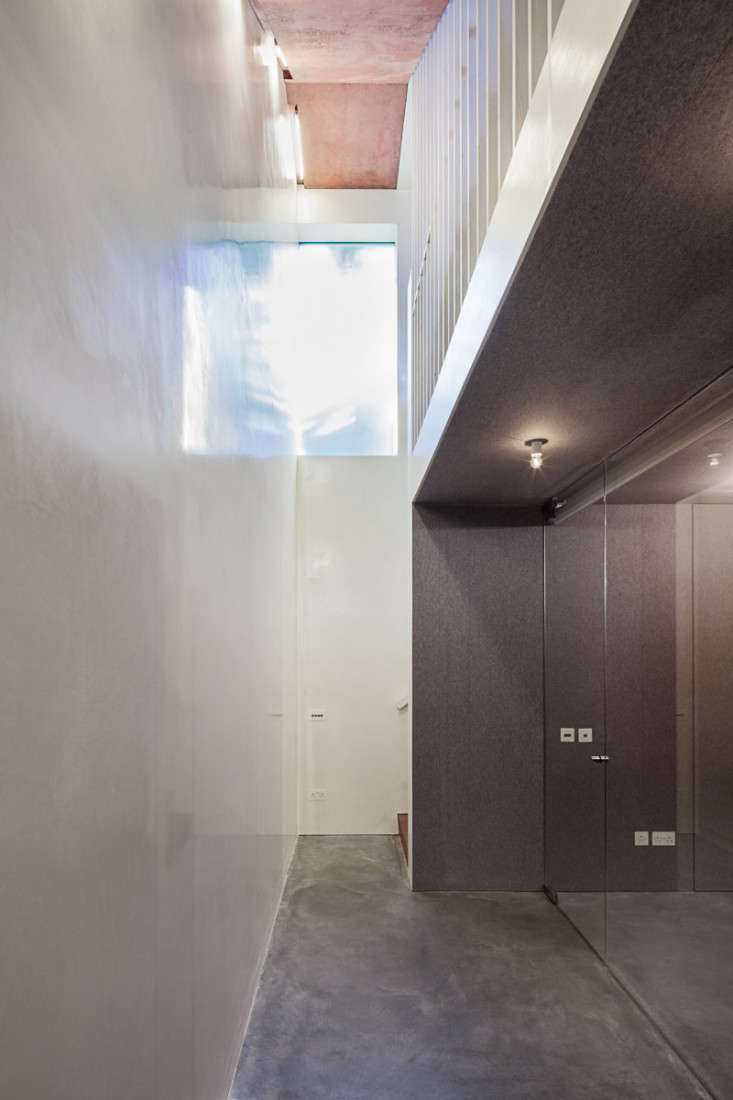 Above: In the newly excavated basement, daylight from above lights up the hallway. The mirrored doors lead to a game room and guest room. 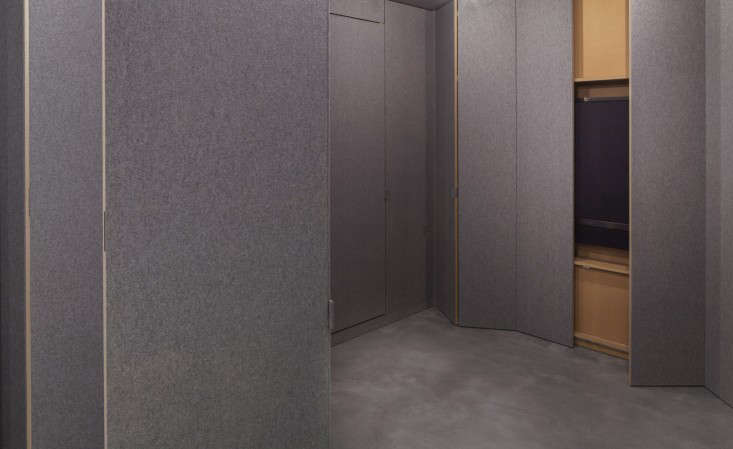 Above: Felt-lined walls in the basement game room slide back to reveal shelves and cupboards. The room can also be partitioned to create a small guest bedroom. 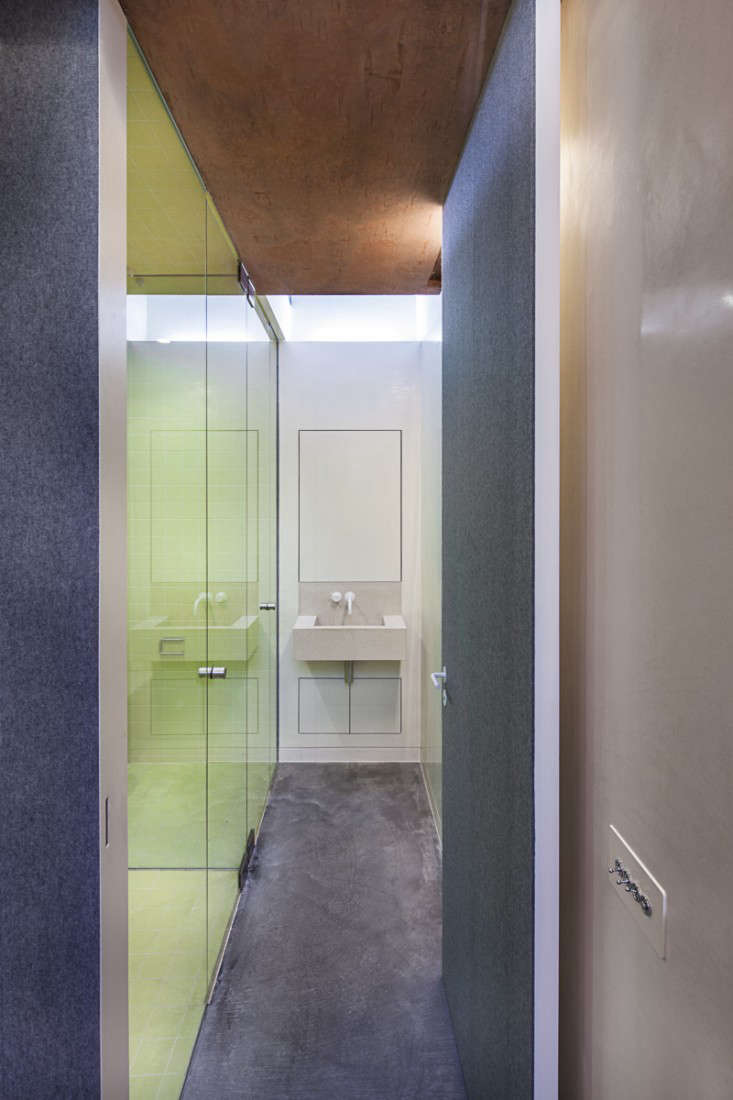 Above: The red cement from the stair above becomes the ceiling of the basement bathroom. 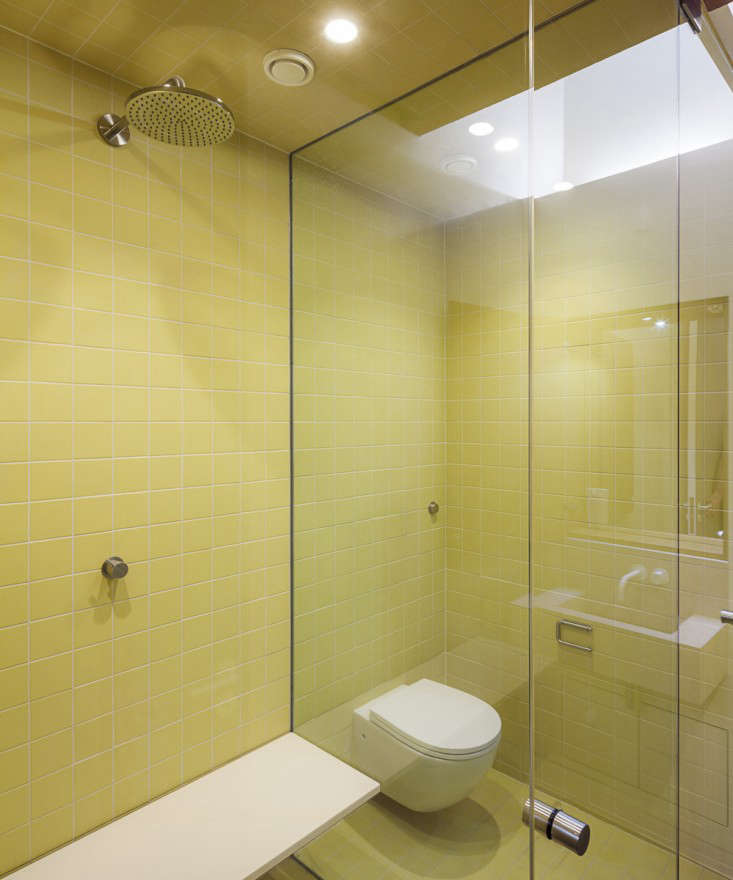 Above: Yellow tiles add vitality to the bathroom.

For more small-living in London, see Rehab Diaries: A Notting Hill Kitchen Extension, Natural Light Included and A Mezzanine with a View in a London Victorian.

DIY: A Storage Tray Made from a Single Piece of Leather

by Margot Guralnick
May 9, 2022
Read all recent posts