Among the (what feels like) thousands of decisions you’ll need to make during a remodel is choosing unsexy, unloved tile grout. Grout is a necessary evil when it comes to tile installations. It seals out dirt and water, compensates for small size differences between individual tiles, and firms up the structural integrity of an installation.

Cathy Bailey, co-owner of California tile maker Heath Ceramics, says it best: “Grout is a serious decision. It’s a major part of the design, and while it’s still often treated as the afterthought of the installation, if you do it wrong, it’s hard to fix.”

We turned to our architect and designer friends, most of whom are members of the Remodelista Architect/Designer Directory, for advice. You’ll still have some decisions to make, but here’s how to orient your thinking.

Where should I start?

According to San Francisco architect John Klopf, first decide on the look you’re trying to achieve. “Ask yourself if you prefer a more uniform, full surface look, or a tiled look, with grout as a defining element.” 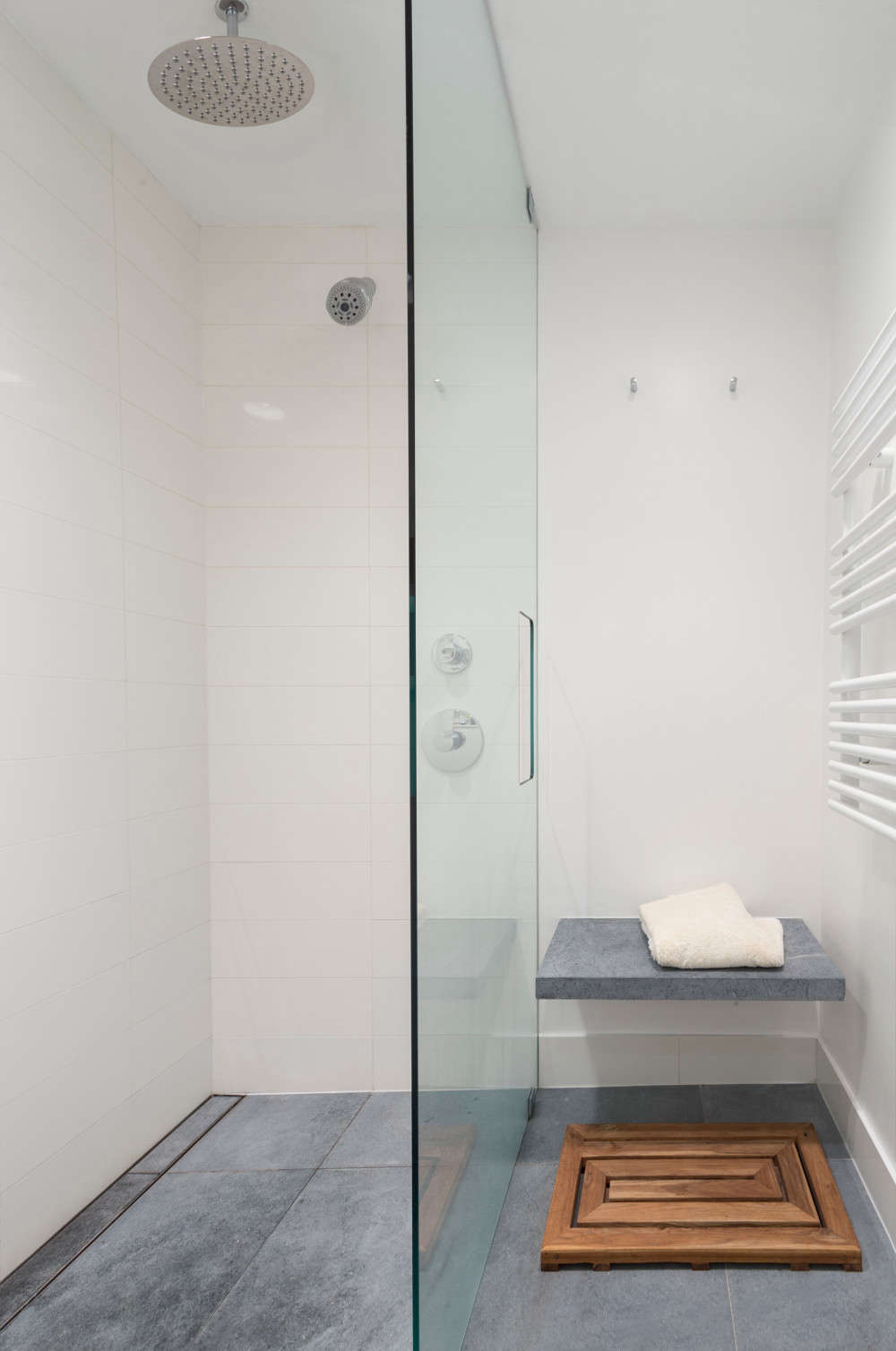 Above: The first concept is illustrated in a Brooklyn bath by architects Delson or Sherman—the grout matches the tiles to give the impression of a more uniform surface. Photograph by Brett Beyer, courtesy of Delson or Sherman. 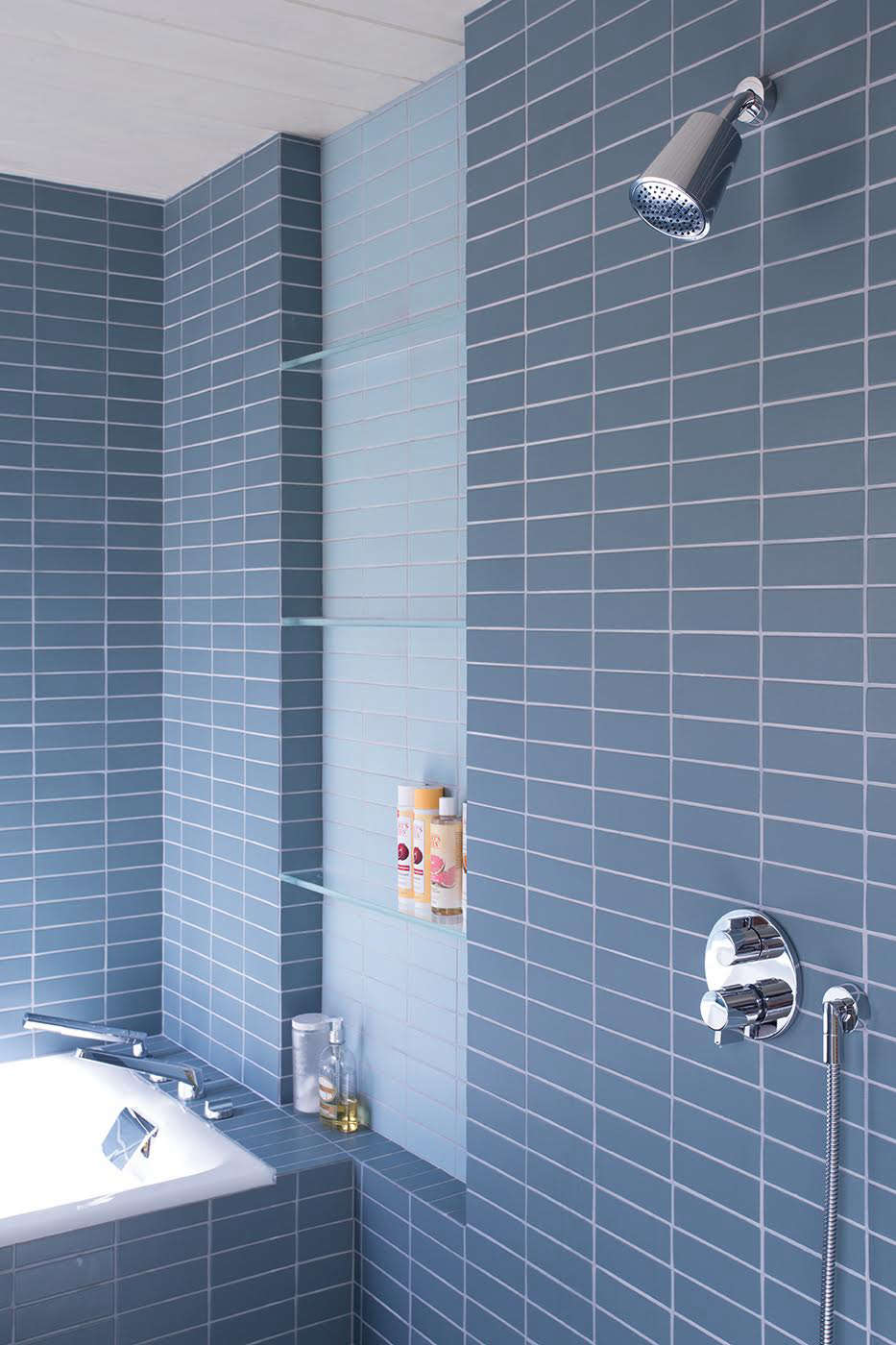 Above: The second concept is modeled here: John Klopf paired dark blue tiles with white grout to emphasize the tiles and the tile pattern. Photograph by Mariko Reed, courtesy of Klopf Architecture.

What type of grout should I use?

There are two kinds of grout—cementitious grout and synthetic grout—with myriad variations in material, grain size, pigment, and more (plus, many grouts are blends of the two).

As a general rule, architect John Klopf suggests using synthetic grout for high-water areas and cementitious grout for everything else. “For bathrooms, kitchen backsplashes, and other wet areas, we recommend the synthetic polymeric mold-resistant type of grout. This not only minimizes cleaning time but also preserves the aesthetic appearance longer, since grout joints won’t collect organic material.”

What color grout should I use?

According to Barbara Sallick, cofounder of kitchen and bath brand Waterworks and author of the just-published book The Perfect Bath, “For some reason, the grout color selection is often left to the last minute. The installer, already on the job, makes the decision.” Let’s avoid that with some pointers from our architect friends.

“We like to mute our grouts by matching their color as closely as possible to the tile color,” Jeff Sherman says. “However, when it comes to pure white bathroom tiles, we never specify white grout, because it yellows over time, which just looks dirty. Instead, we use a very pale gray (we like Silver Shadow from Laticrete, which is light enough to blend with the tile but has enough pigment to never yellow).” 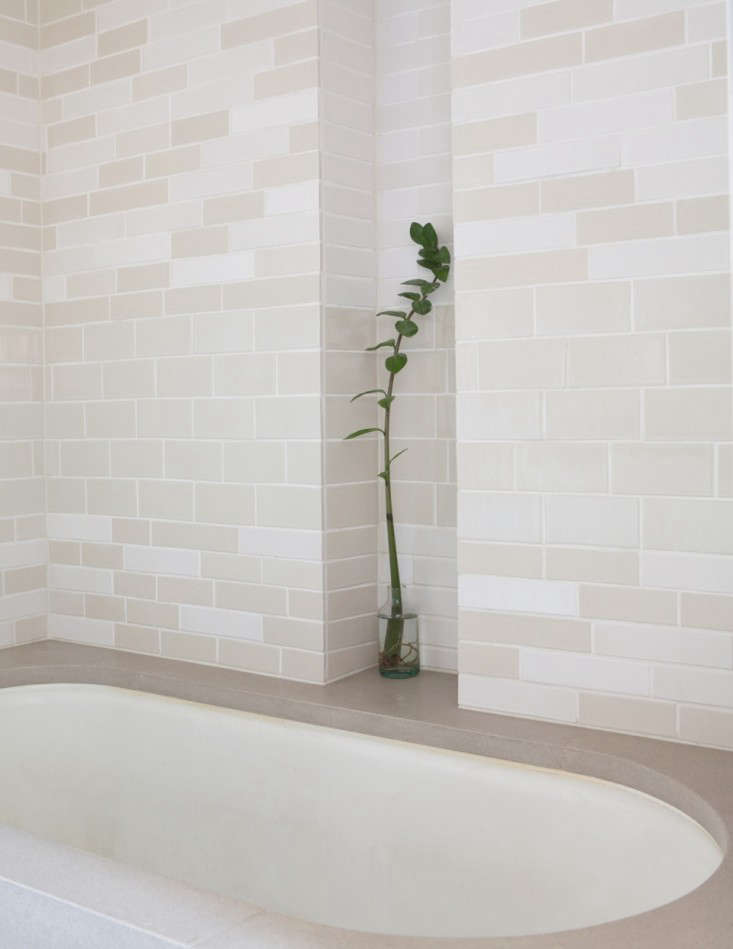 Above: In their own Bay Area home, architects Ian Read and Gretchen Krebs of Medium Plenty chose white grout to fill the space between white and off-white tiles, achieving a uniform look. Photograph by Melissa Kaseman, courtesy of Medium Plenty, from Tile Intel: A Budget Remodel with Heath Seconds. 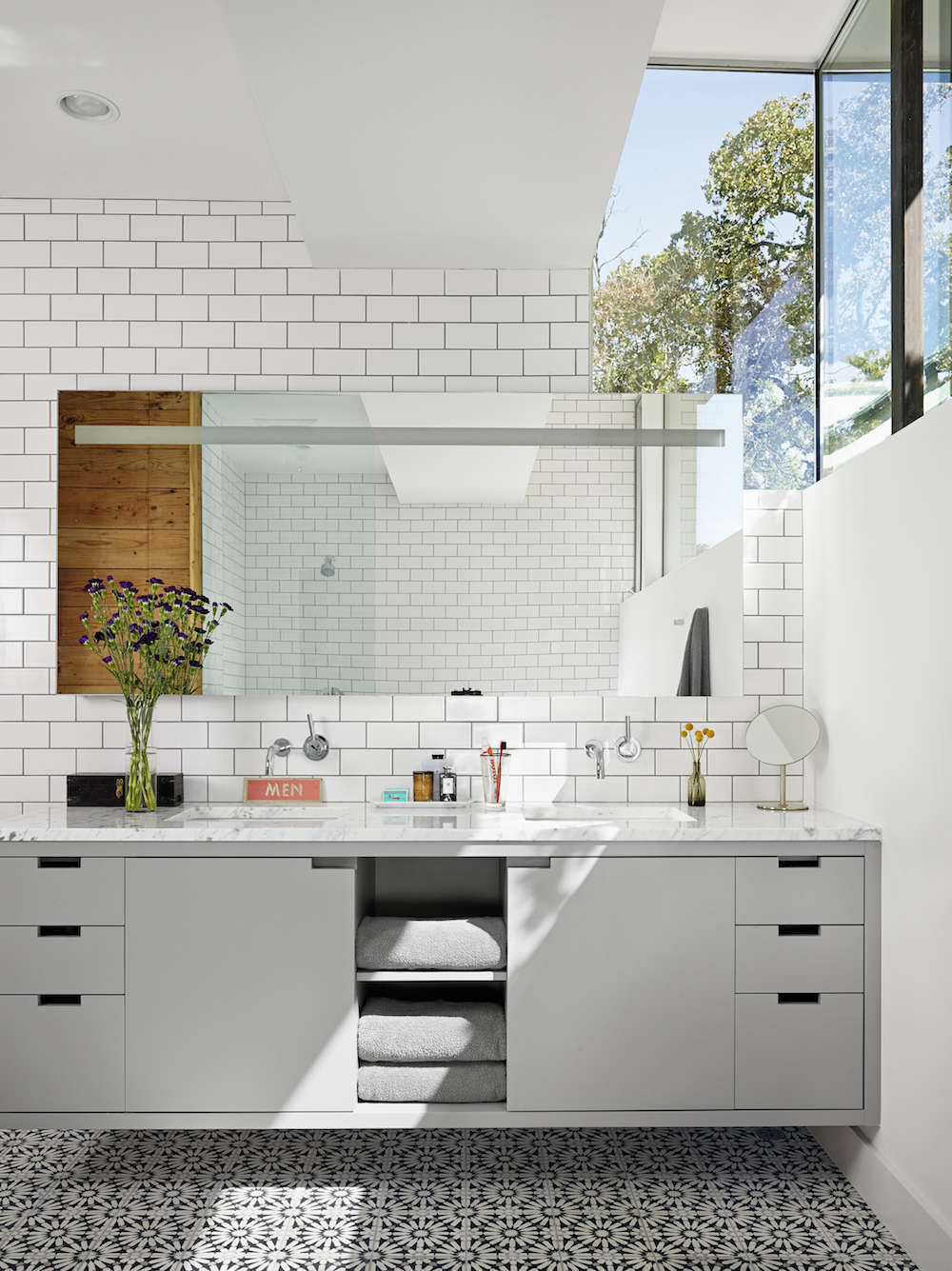 Above: “For many years I suggested a nearly matching color grout, especially when installing white tile,” Barbara Sallick says. “Recently, I have found that light or dark gray grout can look great in some installations. We call that our Old New York look.” In this Austin, Texas, master bath, architect Hugh Jefferson Randolph used a contrasting grout color—dark gray—to fill the gaps between white subway tiles. Photograph by Casey Dunn, courtesy of Hugh Jefferson Randolph Architects.

Above: In the master bath of a Hancock Park, Los Angeles home, architect Barbara Bestor and owner Abby Weintraub chose a brown-gray grout to help hide dirt over time. Photograph by Jessica Comingore for Remodelista, featured in Steal This Look: A Barbara Bestor–Designed Master Bath in LA.

Cathy Bailey reminds readers to think carefully about their lifestyles. In her own household, “We could never think of using a light colored grout on floors, as we have these giant slobbery dogs,” she said. “So we went with the darkest grout we could find.” Or, for contrast, Alan Ohashi of Ohashi Design in San Francisco says, “We usually pick a grout color that matches the tile but is one shade darker.”

How thick should the grout lines be?

On this point, most of our architects and designers agreed, voting for the thinnest grout lines possible.

According to John Klopf: “In the modernist style of design, we always always try to minimize the grout joints; we prefer one-sixteenth of an inch. One exception is for handmade tiles—like those from Heath, Fireclay, and others. Inconsistencies in the shape of the tile require a wider joint than we’re used to, up to one-fourth of an inch. To combat that, we order about thirty percent more tile and discard the most irregularly shaped pieces. What’s left should be able to install cleanly with a somewhat thinner grout joint.” 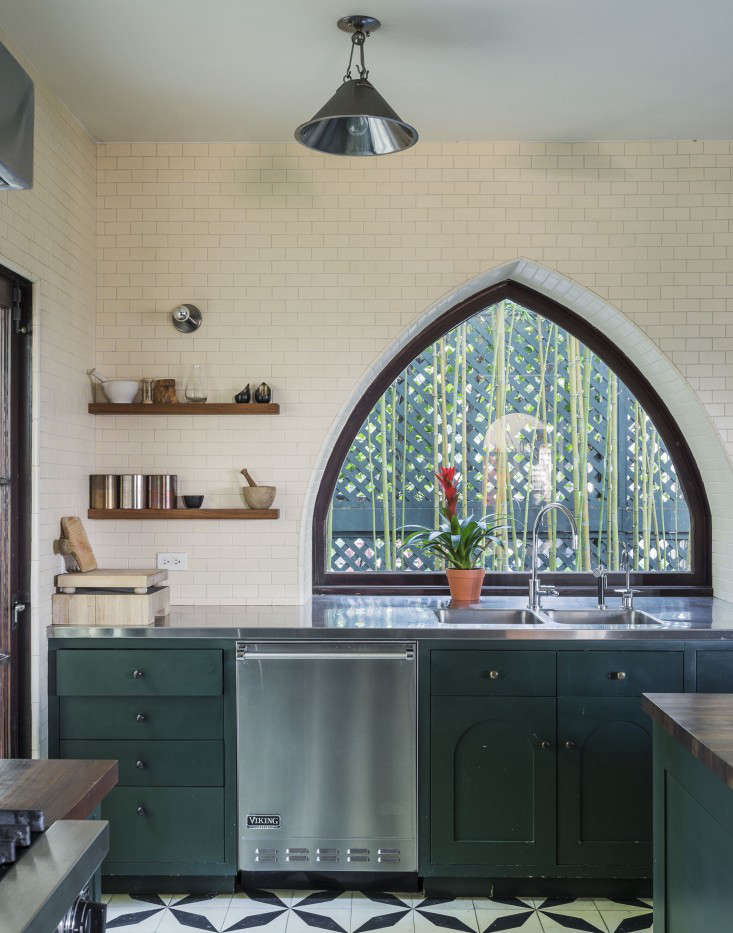 Above: Ian Read and Gretchen Krebs cleverly incorporated grout lines into the design scheme of their own kitchen backsplash: They made the grout joints the same thickness as a set of steel shelves, so the shelves look like they slot neatly into the tiles.

Can I try grout and see how it will look?

With some elbow grease, yes. On large jobs, Bailey suggests installing a small sample of tile and grout on a board, then testing it in the space. “That’s a bit much on a residential job,” she says, but at home, try wetting some grout powder—”grout gets slightly darker when applied”—and wiping it right onto a sample piece of tile.

Sallick suggests a variation: Set about one square foot of tile on a piece of plywood and dust grout powder into the joints. “The color will be close and will make your decision less abstract,” she said.

A Modern Masseria in Puglia with Traditional Influences

High/Low: The "It" Live-Edge Trestle Table

Remodeling 101: The Case for Small Appliances