Last month’s Barbara Bestor-designed New England Kitchen by Way of LA left our readers wanting a tour of the rest of the house. Here’s a look at the other room she tackled for owners Abby Weintraub and Matt Manfredi: an everything-you-could-wish-for master bath carved out of a tiny existing bath and a pair of adjoining closets. “As with the kitchen,” says Abby, “we wanted a room that looked generic in the best sense of the word.”

Photography by Jessica Comingore for Remodelista.

Above: The house, which is in Hancock Park, LA, dates from 1941 and the existing master bath was barely big enough for one person. “At first we weren’t sure if we could fit a tub and shower, but once we sacrificed part of a large linen closet, as well as the two closets, we were in good shape,” says Abby. “It’s still not big, but it’s a completely different story.” Bestor designed the bathtub and shower as a series of rectangles that are echoed by the wall and floor tiles and steel-framed window. The geometry and openness make the space feel much larger than it is. 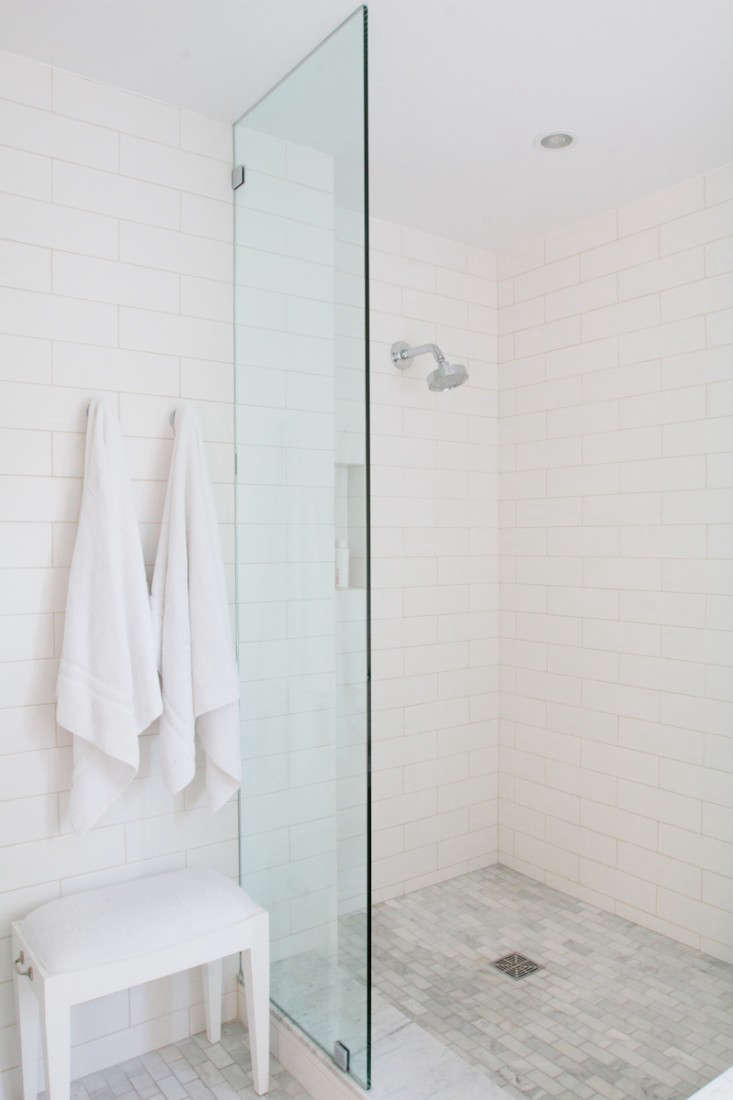 Above: The oversized subway wall tiles are 4-by-12-inch Arctic White in a matte glaze from Daltile; because they cover so much of the room, they ended up being the most expensive detail (approximately $2,400, not including shipping and labor). The floor is clad in honed Carrara 2-by-4-inch subway tiles. Abby planned to order them from a New Jersey supplier, but Matt tracked them down locally at Oracle Stone + Tile at a lower cost plus free shipping. They were $11.90 a square foot (and came to about $600 total). The Purist Shower Head by Kohler is $204.19 from Amazon.

Abby points out that ordinarily their contractor would have taken care of the tile and fixture ordering, but as a money-saving measure, the couple struck an agreement with their team to do their own sourcing and purchasing–and, along the way, questioned the wisdom of this measure. They nonetheless ended up with details that they love.

Above: Polished Carrara marble frames the bath and continues on the custom cabinet that’s just big enough for a pair of sinks. The door color is Benjamin Moore Baltic Gray. 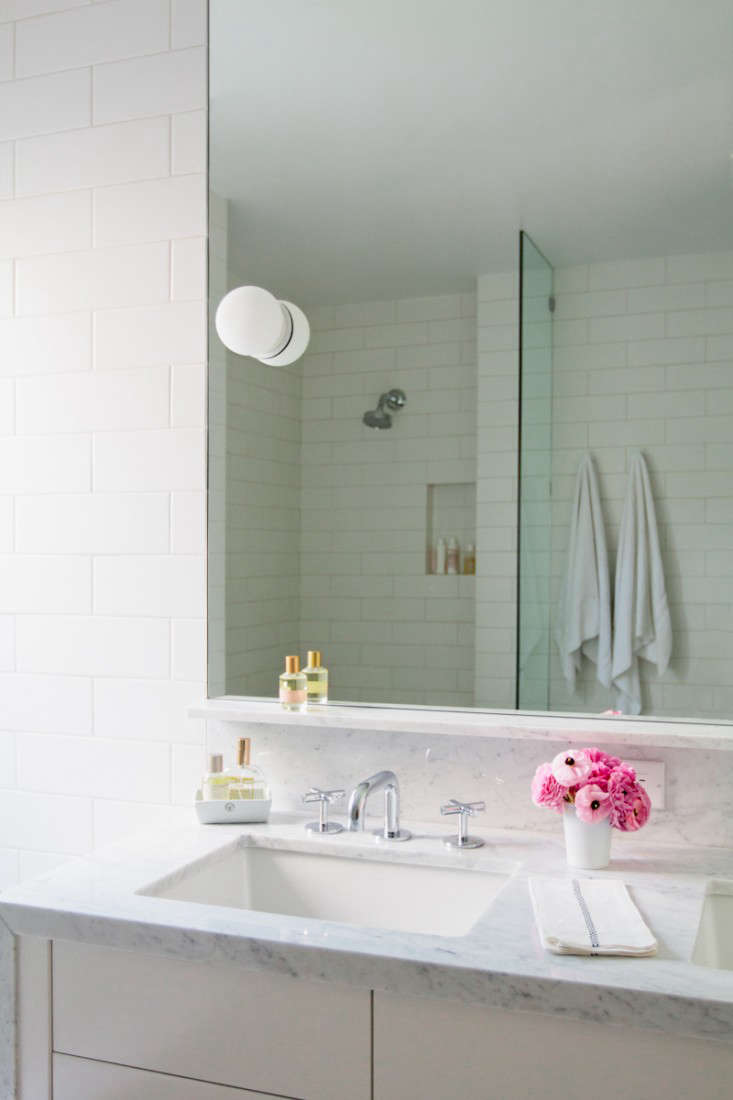 Above: Abby gave much thought to the sink and shower fixtures: “With faucets, so many are almost right, but then there’s something proportionally weird or a choice that makes them almost great but ultimately not right.”  She had initially wanted unlacquered brass fittings but couldn’t find any that were “not too modern, not too traditional, and affordable.” Bestor urged her to consider chrome. “She said, you’ll never hate it, whereas brass has a very specific look that we might get tired of.” In the midst of Abby’s search, Waterworks introduced its Studio Line at half the price of many of its designs. She chose the cross-handled option, $567, from Waterwork’s Flyte collection and likes it so much she used it to upgrade the other bathrooms in the house. “When fittings are very visible, I think it’s worth paying for something well made and beautiful.”

Above: The Toto Dual Flush Toilet ($324 at Homeclick) is low flow and sized to fit even the smallest bathroom (Abby later added it to their tiny powder room). In lieu of towel bars, which would interrupt the clean lines of the room, the couple opted to have two towel hooks next to the shower and one on the door. “The setup feels liberating and easy,” says Abby. The showerside bench is a Restoration Hardware hand-me-down from Abby’s parents. “If I had my way,” she says, “it would be replaced with something modern and Shaker-inspired.”

Above: The steel-framed window is original to the room. Frosted panes were added to the bottom panels for privacy.

Above: A tiled niche in the shower holds shampoo–so there’s no need for a cluttered-looking shower caddy.

Above: The Carrara floor is finished with dirt-concealing gray grout.

Remodeling your own bathroom? Browse our Bathroom Gallery for inspiration and advice, including a DIY towel bar (from rope) and the most inventive toilet paper storage.

In collaboration with: Fisher & Paykel's ActiveSmart™ Refrigerators, Designed to Match

A New Line of Storage Furniture from Denmark