Meet Isabel and George Blunden and their 1,100-square-foot fixer-upper in London. She’s a travel editor, he’s in media, and for their first remodel, they decided to completely gut the interior of their tiny Victorian railway cottage, working with just a building team. For the next four days, Isabel will be chronicling their design journey. First up: The Before shots and the big plans.

When we bought our terraced house in southwest London, our first place together as a married couple, it was barely bigger than the flat that we had just sold. Financially, in the crazy London housing market, this was perhaps not the most savvy decision. But the idea of owning our very own little building, having tiny gardens in the front and back, plus a roof, four walls, and a front door that belonged to us and only us, was irresistible. We told ourselves: The key really was not how much space we had, but how well we could use it.

Above: Isabel and George Blunden at their new front door.

The terraced Victorian railway cottage had been a rental property for the past decade. Every cost- and corner-cutting renovation and bad decorating decision that could have been made had been made. There was pebble dash on the front facade (every other house on the street still has its lovely, original brickwork), rotting timber window surrounds and PVC casements in place of the original stone and wood, and an awkward L-shaped back extension that had to go. That was just the start. Aesthetically discouraging elements included flimsy doors, the sort of unlovely metal door handles you see in schools, cheap orange pine laminate floorboards, and an overload of spotlights absolutely everywhere–the sitting room ceiling looked like a Heathrow runway at night. The house was a bit sad and unloved. But we could see beyond all of that. 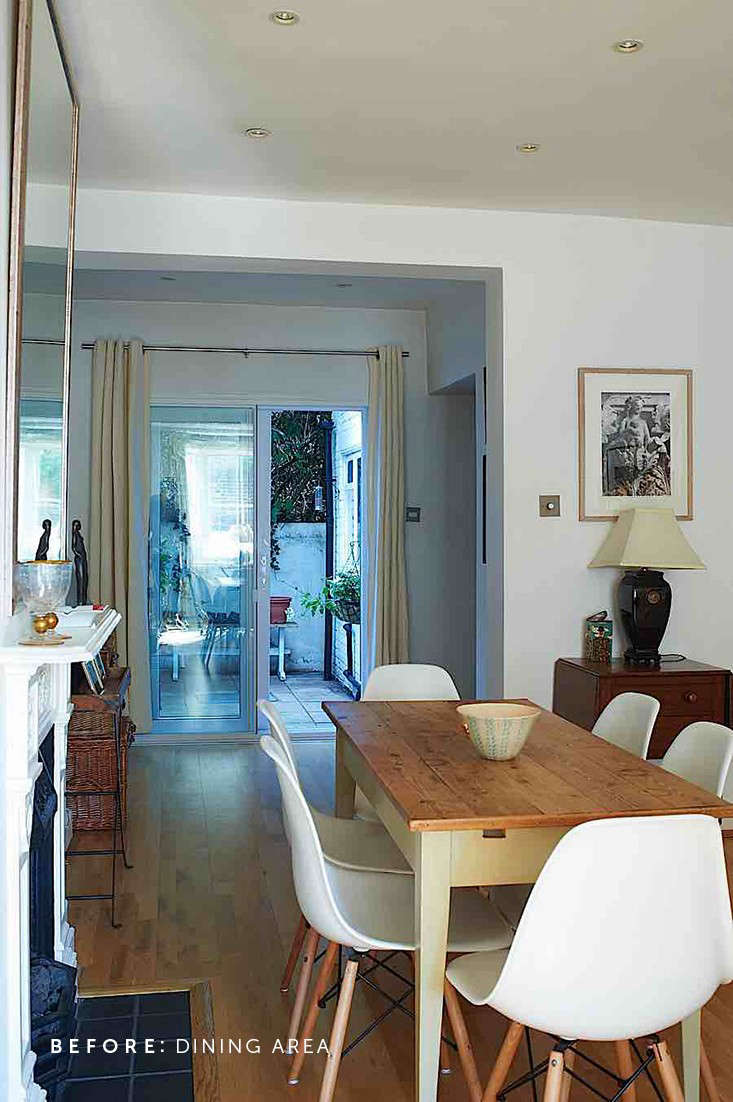 Above: The front door opens to a combination living room and dining room. 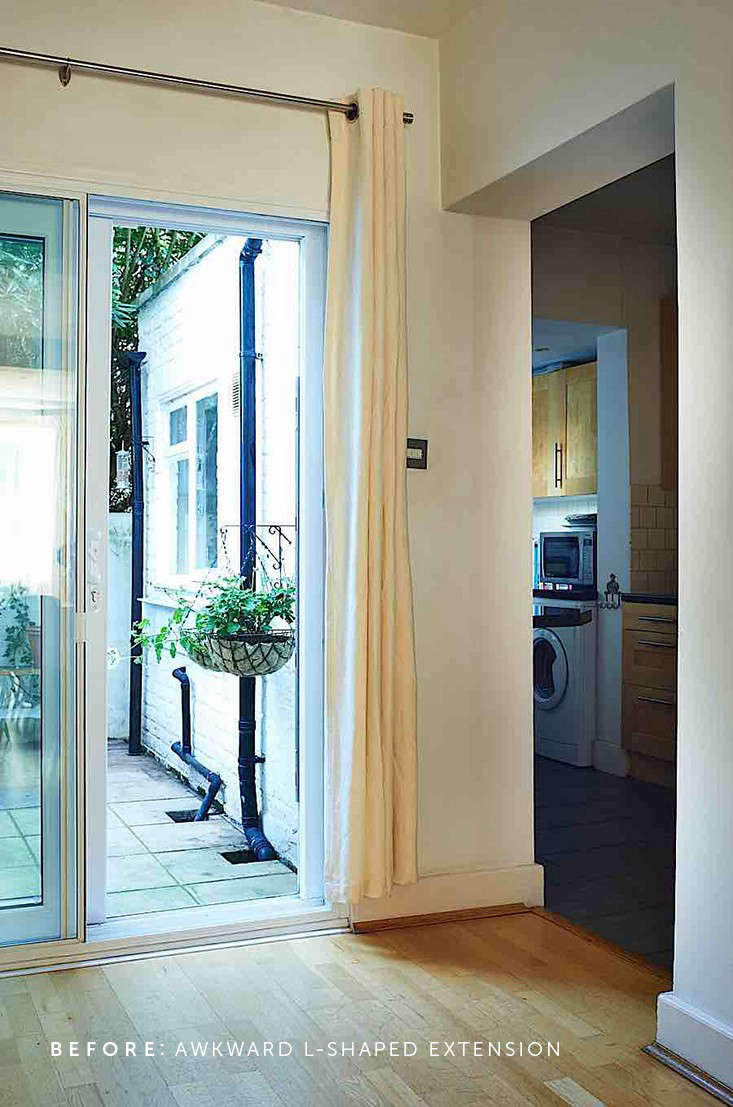 Above: It was absolutely standing room only in the kitchen–and if the dishwasher or oven were open, it awkwardly trapped you on one side or the other. We longed for a bright, sociable household hub filled with friends and family–and not a cheerless corner that the cook was banished to. 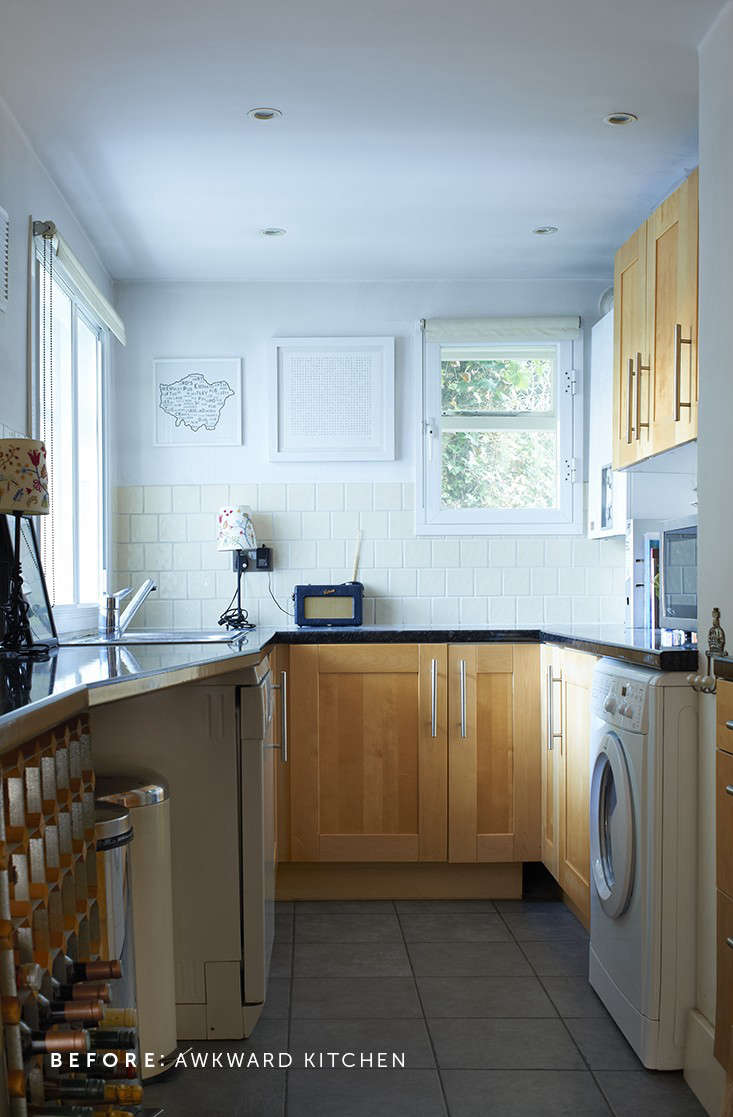 Above: Structurally, the galley kitchen was the main problem. Situated in the aforementioned extension that intruded into the tiny back garden, it was a dark, narrow space that was blocking natural light to the rest of the downstairs and impractical to use. 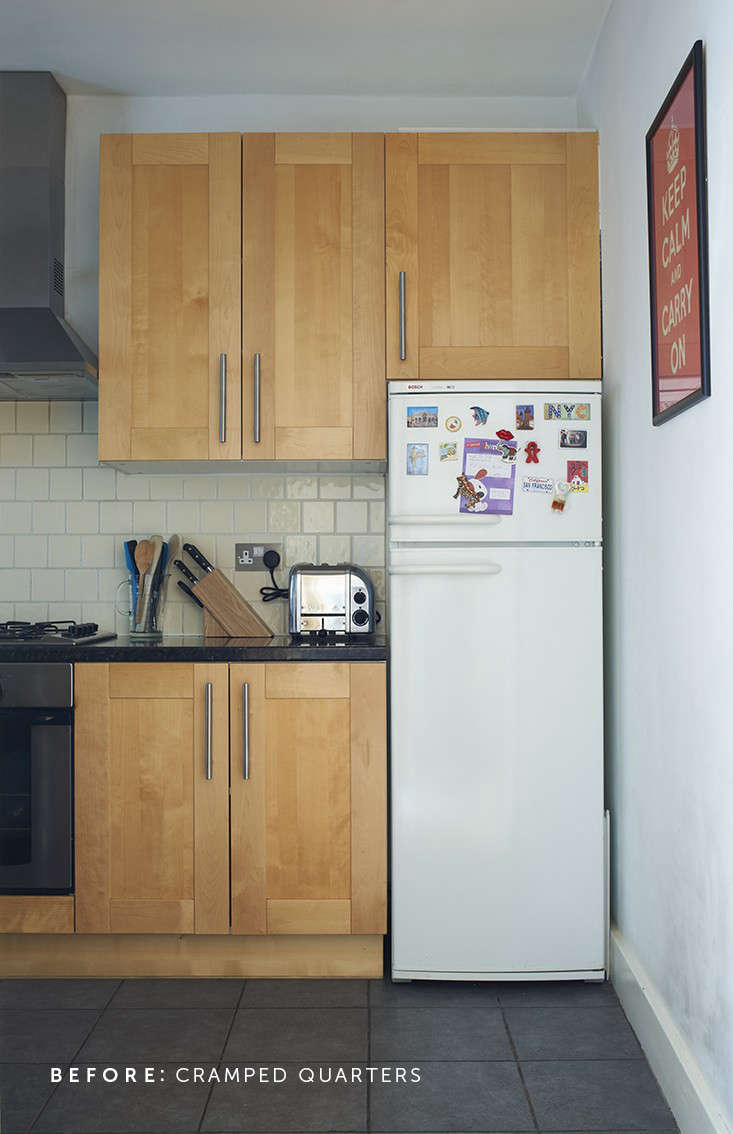 Above: The kitchen also took up the only sunny corner of our northwest-facing garden. It created a dead zone by the plastic sliding back door that was too small for a dining table but big enough to feel like a dreadful waste. Downstairs there was also a loo that was unnecessarily large and cut straight across the middle of the living space, and under the stairs was a big storage cupboard, fantastic for filling up with junk, but not a great use of that part of the house. We could see that we didn’t have to extend the structure to give ourselves more room. With the benefit of hindsight, employing an architect at this point might have helped with storage issues and squeezing the most out of our new home. But we were full of energy and enthusiasm, and we wanted to do it ourselves. 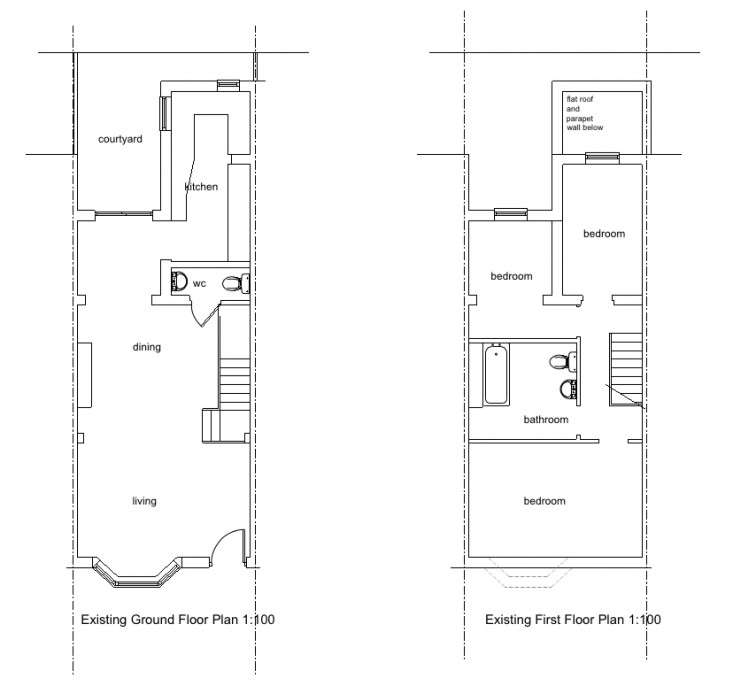 Above: Plans mapping the existing conditions of the two-story house. On the first floor, note the way the kitchen juts out awkwardly in the L-shaped extension and the powder room interrupts the middle of the space.

Having come across plenty of similar properties during the course of our long house hunt, we had an idea of what could be achieved by shifting a few walls around, opening up rooms, and allowing light to flood through, all of which would give the place a better, more functional flow. It wasn’t a case of increasing square footage, we just had to repurpose the spaces. We plotted and planned the internal layout without an architect or designer. Our surveyor and our builder both chipped in with ideas and suggestions on what would and would not be possible. 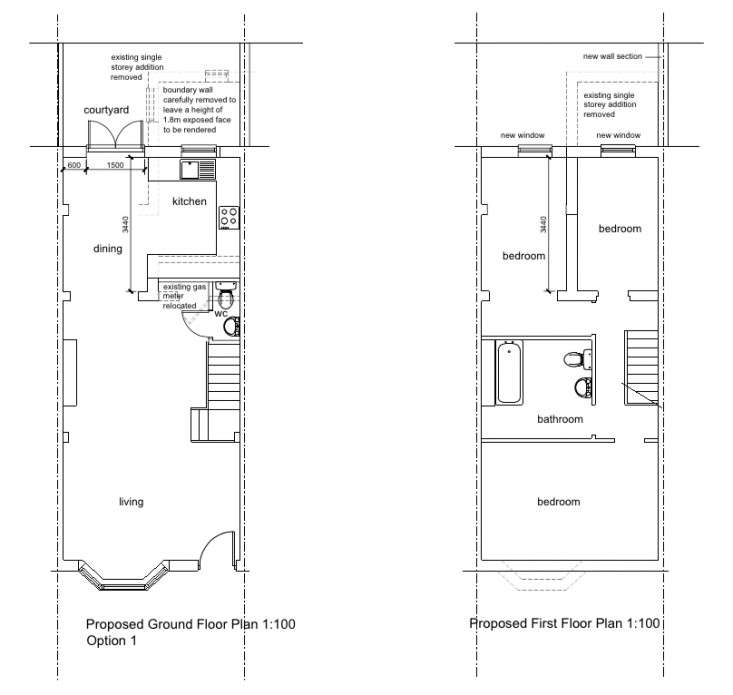 Above: The proposed changes on both floors. In the kitchen, the plan was to knock down the old extension and flip the room 90 degrees–the point was to make the space feel bigger but preserve our precious sliver of outdoor space. On the second floor, fortunately, less fancy footwork was required.

Despite the fact that there were no structural changes upstairs, we were still dreaming big, including a complete bathroom renovation. With three bedrooms and a bathroom upstairs, we had a fair amount of space but very little storage. For now though, we have scaled down our new bathroom ambitions until a later date. Here’s a tour of what we were working with. 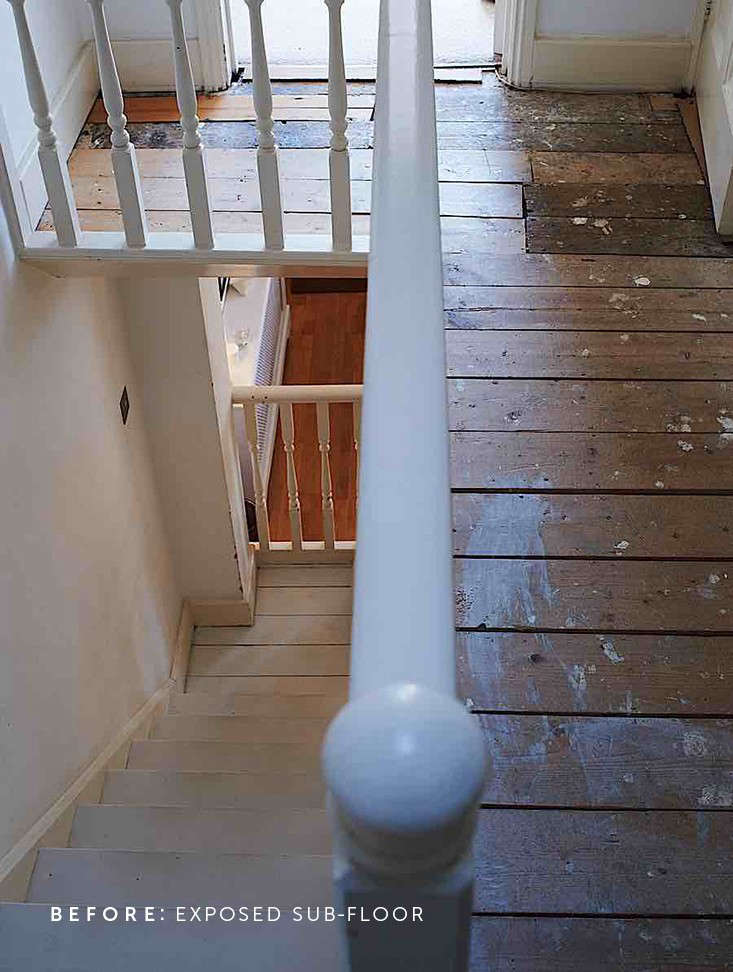 Above: What flooring to add? Fortunately, we didn’t have to decide right away. 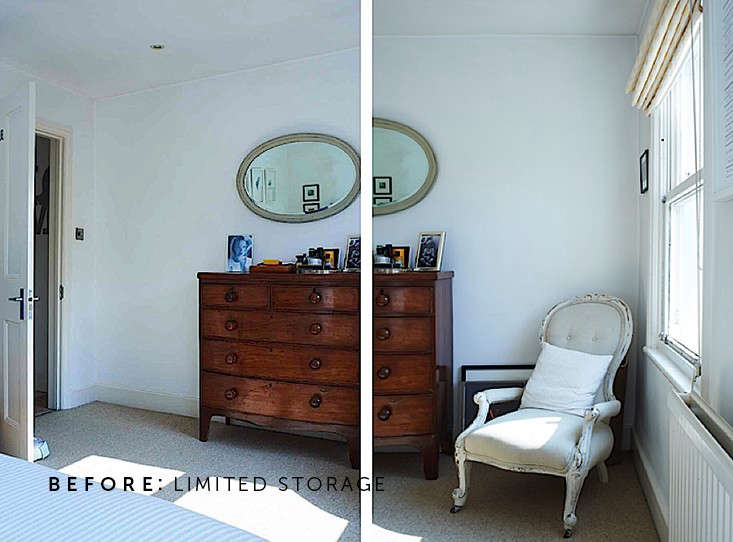 Above: Lacking closets, where to stow our clothes? We set our sights on fitted wardrobes. 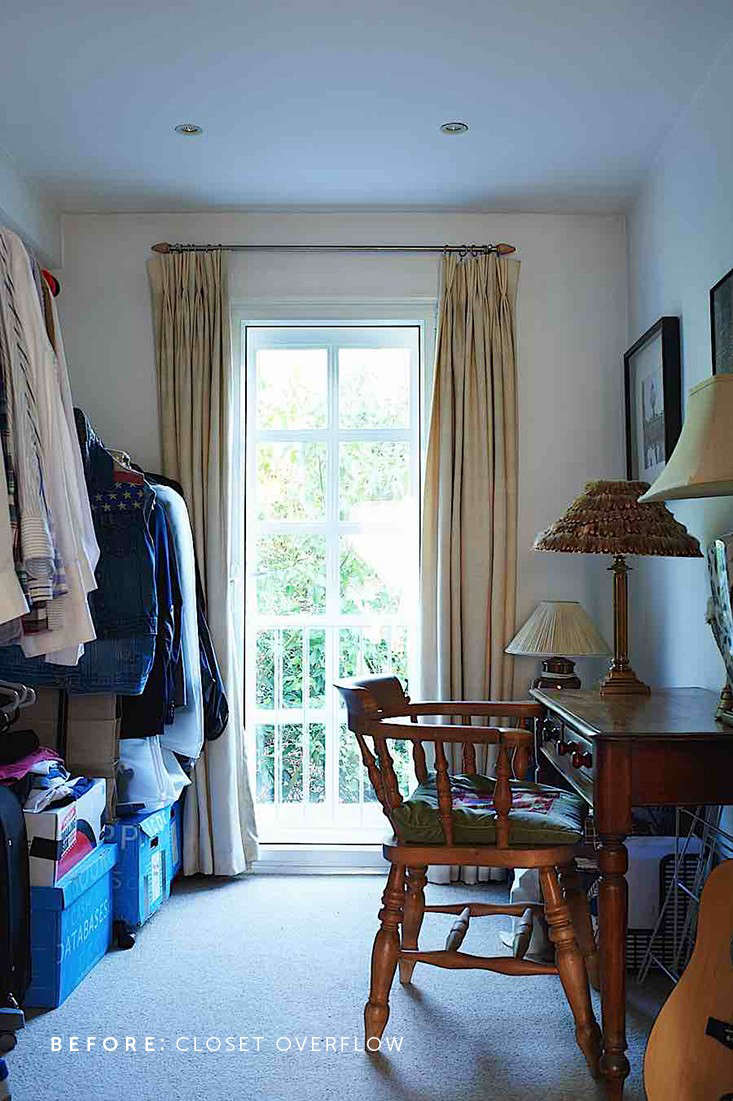 Stay tuned: Tomorrow, I’ll take you through our under-construction adventures.

Can’t resist a good Before and After? Have a look at: