The Scenario: Designers Megan Sommerville and Matt Ensner decide to leave Brooklyn to escape rising rents and resettle in the Hudson Valley to launch their furniture and lighting company Materia Designs.

The Solution: After looking at more than 40 properties, they buy a dilapidated 1940s Cape Cod–style bungalow in Ulster County with good bones and 13 acres of land (bluestone cliffs, a waterfall, and a crumbling outbuilding included). They sink their savings into the house, so the only way forward is to renovate it themselves. That means taking the house down to the studs and rebuilding it (yes, all electrical and plumbing, as well as walls, windows, and a back porch).

The Result: After a few rounds of “drywall parties” with friends from Brooklyn and three years of ongoing intensive work, they achieve a homestead that reflects their commitment to time-tested design.

The Couple’s Top Three Tips: 1.) If you plan to live onsite during the renovation, focus on finishing a space that’s clean and separate, so you can maintain your sanity. 2.) Spread out the large purchases–doing this allowed us to buy things that are made to last. 3.) Have a detailed plan. Knowing what you want to do and how you’re going to do it is very helpful in avoiding costly and time-consuming mistakes.

Join us for a tour. Photography by Poul Ober (unless otherwise noted). 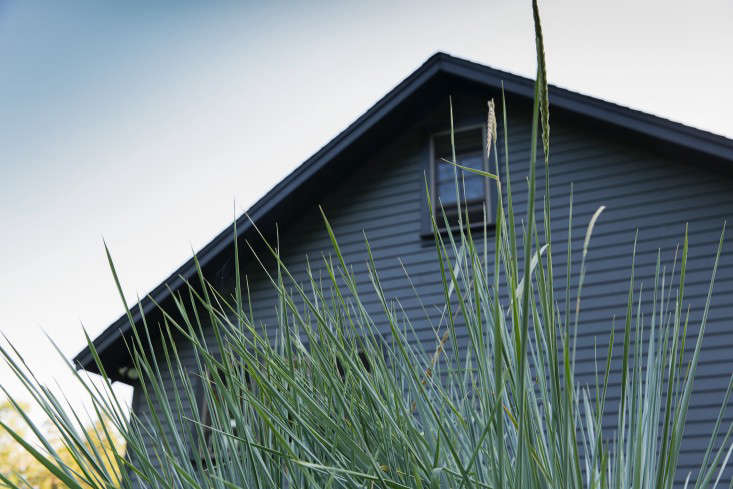 Above: The couple moved into the 1,900-square-foot house immediately after purchasing it. “We renovated the upstairs master suite so that we would have somewhere to live while we continued the downstairs renovation, as time and budget would allow,” Megan says. 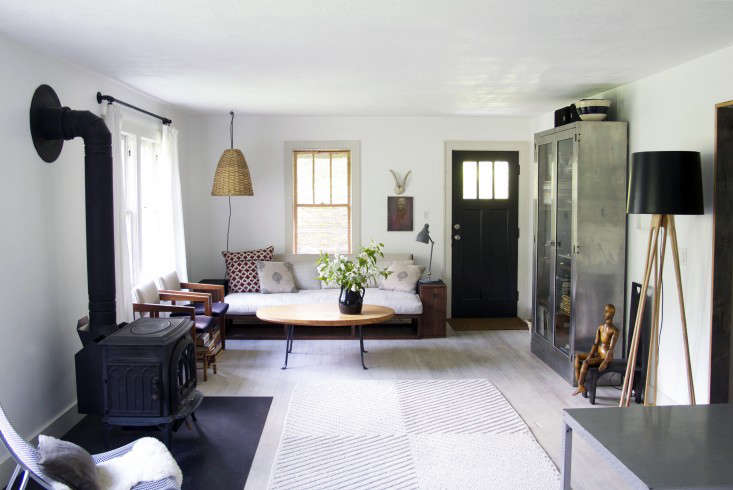 Above: The front door leads directly into the main living space, which is warmed by an Oslo Woodstove from Norwegian company Jí¸tul; it was one of the first things Matt and Megan installed. “We paid close attention to being ‘green’ wherever possible and have reaped the benefits: Since installing our Jí¸tul stove six years ago, we’ve used only a single tank of heating oil to heat the house,” Megan says. The couple removed layers of varnish from the original Douglas fir floors and treated them with their own custom gray-washed Driftwood Finish.

The room is furnished with their Materia Designs Ulmus Coffee Table and Cubo Sofa of black walnut, linen, and calfskin. Vintage black walnut chairs are reupholstered in black cotton velvet and linen. The couple used painted plumbing pipes throughout as curtain rods for simple linen sheers. 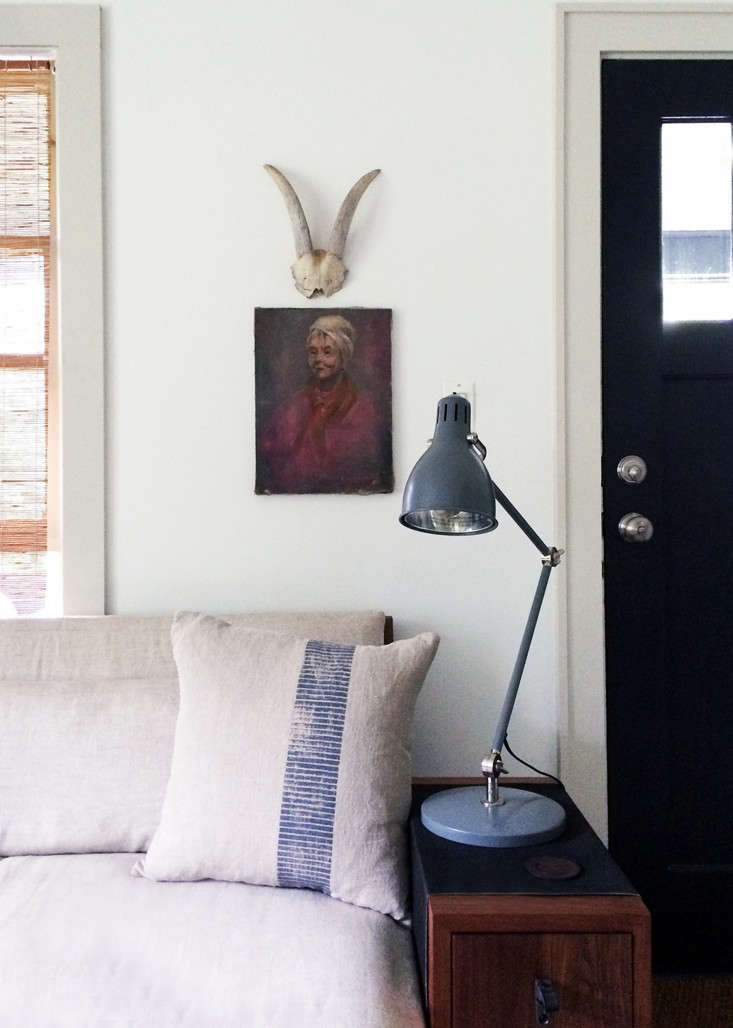 Above: Throughout the house, the designers mix their own designs and prototypes with antiques and accessories they’ve collected over the years. A lamp from Ikea hovers over a Barcode Cushion printed on Belgian linen from the couple’s new textile collection. The painting came from a local flea market, and they discovered the horns during a walk on their property. Photograph by Materia Designs. 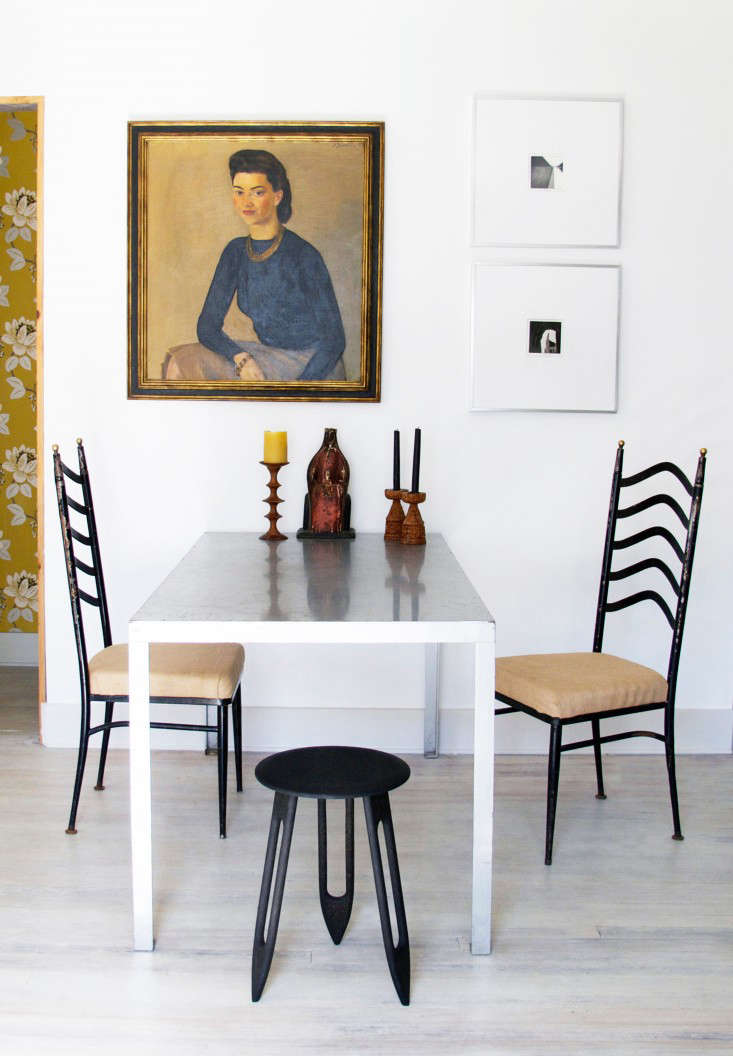 Above: The dining area, which is near the kitchen at the opposite end of the living space, includes a steel Parsons table that the couple found on the street in Brooklyn. It’s paired with 1940s black and brass dining chairs reupholstered in burlap and a Tibula Stool from Materia Designs. The oil portrait, painted in 1947, is of Megan’s great aunt, and the two small intaglio etchings are by Joe Owczarek, an architect and artist whom the couple represent in their Hudson Valley showroom. Photograph by Materia Designs. 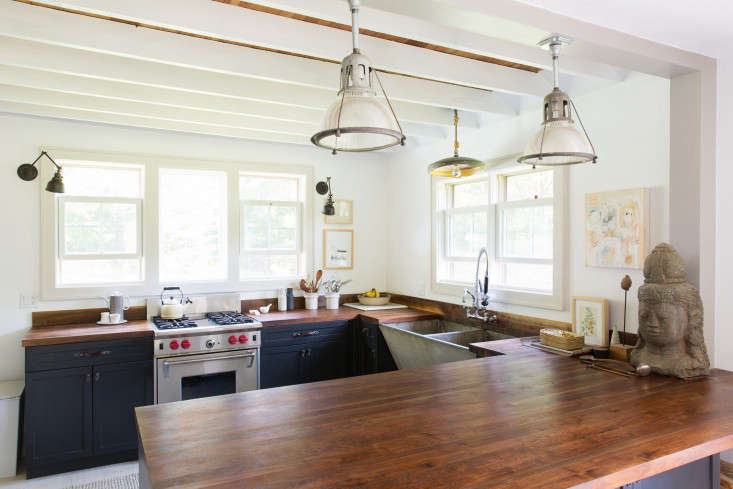 Above: The U-shaped kitchen occupies half the back wall of the house and is open to the main living space. “We didn’t want it to look too ‘kitchen-y,’ ” Megan says. “We used darker materials to provide contrast with the light walls and chose finishes that we might use in our furniture, such as walnut and leather.” The butcher block countertops were custom built from a black walnut tree that came from a neighbor’s property. “They’re finished with a natural oil and are super forgiving; we just have them wet-sanded from time to time.” Vintage glass factory pendant fixtures hang over the counter; two Reed Lamps from Rejuvenation provide task lighting for the prep area by the stove; and the Cape Pendant above the sink is by Materia Designs. 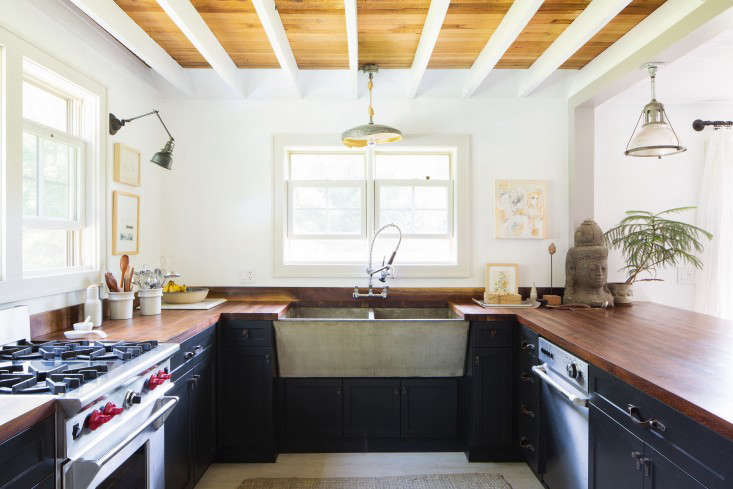 Above: Forgoing upper cabinets was easy with the U-shaped kitchen configuration, which provides ample storage. The double-sided sink was discovered in the basement of an old farmhouse nearby and the industrial faucet came from Fisher, a restaurant supply company that makes its fixtures in the US using responsible manufacturing practices.

The couple decided to expose the Douglas fir rafters and ceiling joists in the kitchen and plan to eventually carry that through to the living room too. “Instead of leaving the original ceiling joists raw, we opted to paint them in several coats of Super White by Benjamin Moore, which made our eight-foot-high ceilings feel much higher and brighter,” Megan says. 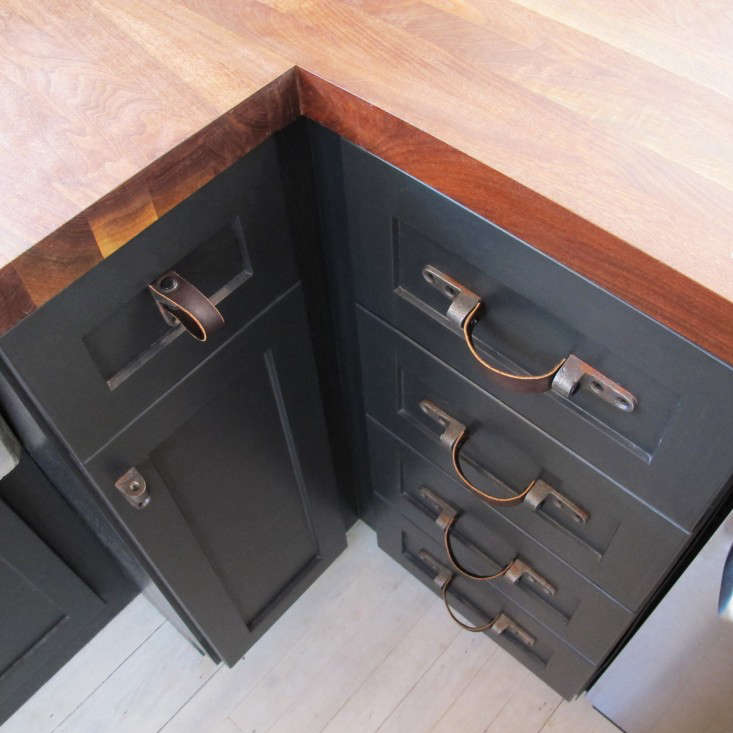 Above: The designers made the kitchen cabinets from several inexpensive architectural salvage units, which they disassembled and then reconfigured and refinished. They created the hardware from steel plumbing parts and calfskin from Pergamena, a family-owned local tannery. Photograph by Materia Designs. 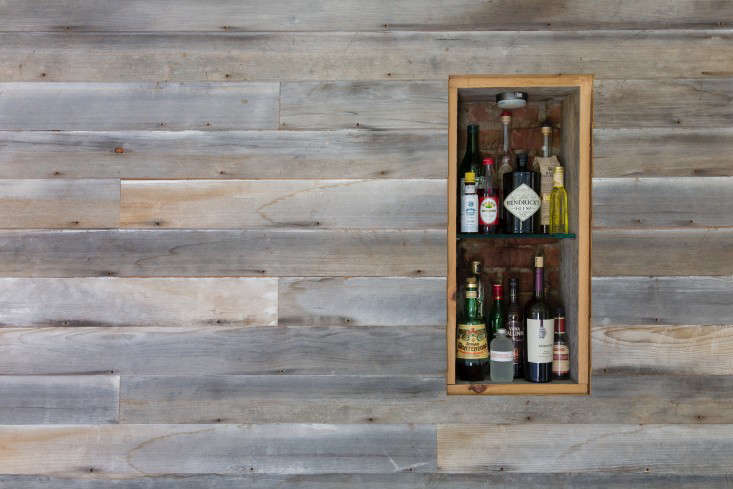 Above: Megan and Matt built a small bar into a cedar-shingled wall outside the kitchen. The bar’s exposed brick is chimney facing. 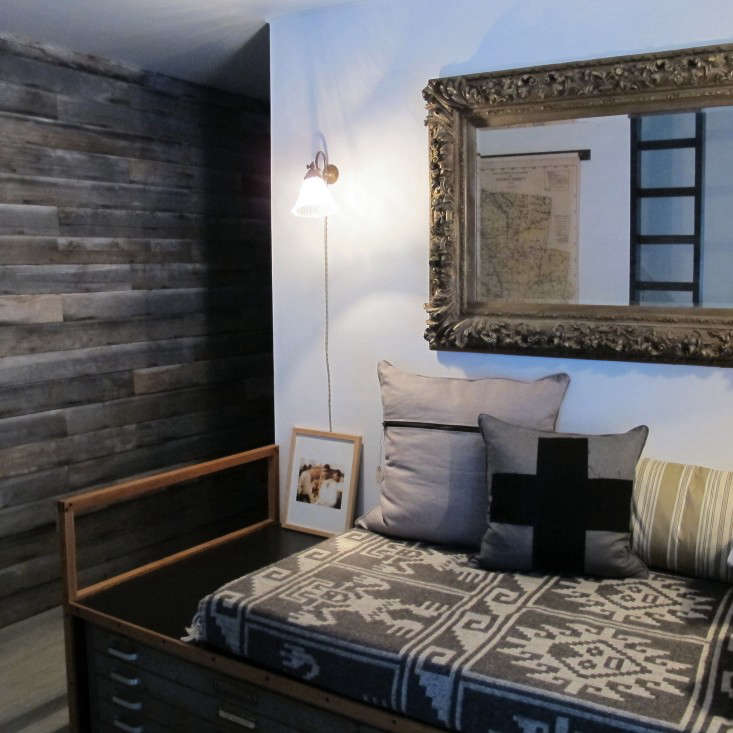 Above: Off the kitchen is a sitting room with a daybed that the couple built for sleeping and watching TV. The flat files underneath are used for storing drawings and paperwork. Matt’s great grandmother passed down the antique gilt mirror to the couple as a wedding present. The beveled weathered cedar shingle siding that lines the hall is repurposed from an outbuilding on the premises. Photograph by Materia Designs. 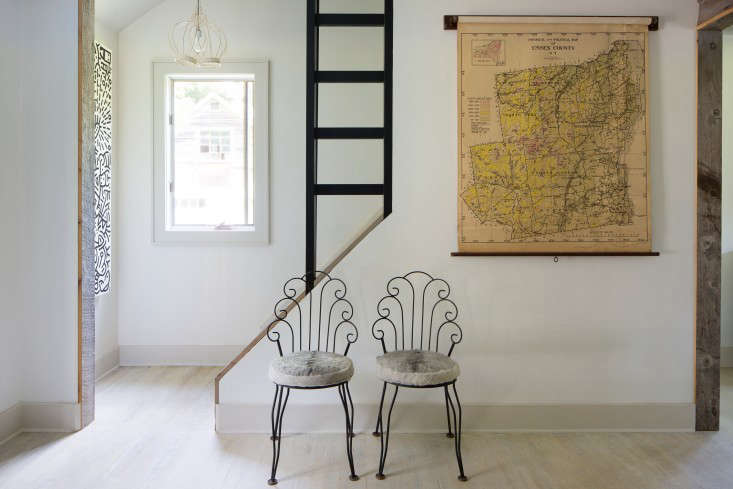 Above: In the sitting room, a roll-up vintage school map hides the TV. The stairs lead to a second-floor master bedroom suite, and the ladder provides access to a sleeping loft used for overflow guests. 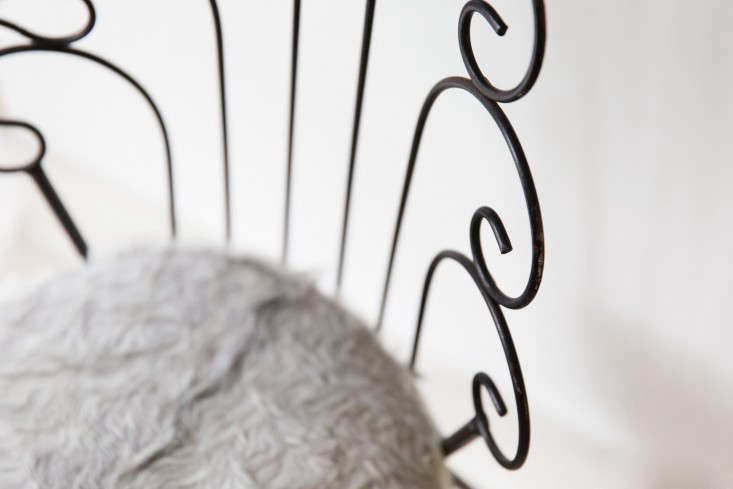 Above: The antique steel chairs are reupholstered in gray goatskin.

Above: Painted plumbing pipe was used to create a handrail and ladder hold. 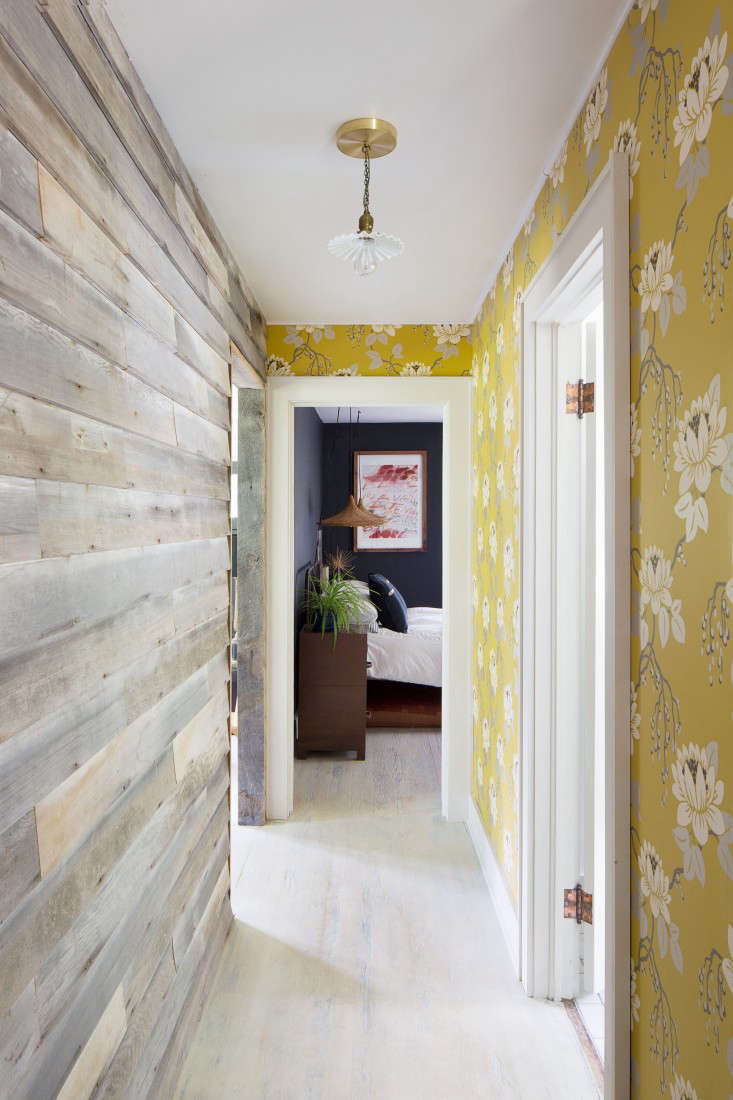 Above: In the downstairs hall, large-scale Kimura wallpaper from Romo contrasts with the raw, linear cedar shingles. “We think a lot about texture and scale in both our furniture and interiors projects,” Megan says. “We wanted one moment of bold color and added it here because it’s visible from all the downstairs rooms.” The guest room is at the end of the hall; the sitting room and living area open to the right, and there’s a bath on the left. 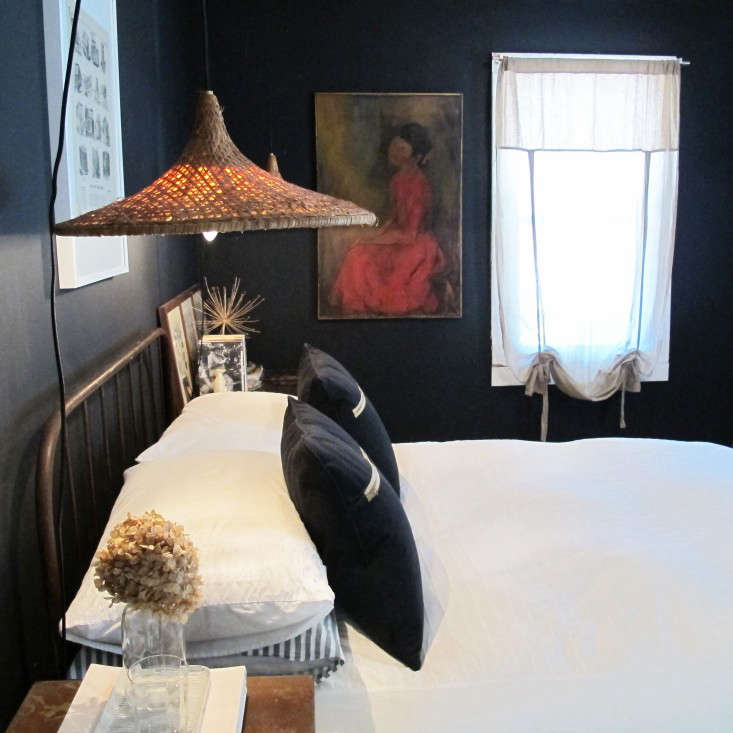 Above: “We chose charcoal chalkboard paint for the guest room because it’s on the north side of the house and is always dark,” says Megan. “We painted the room white at first, but it felt dead, so we decided to embrace the lack of light and envelop the room in a dark veil.” 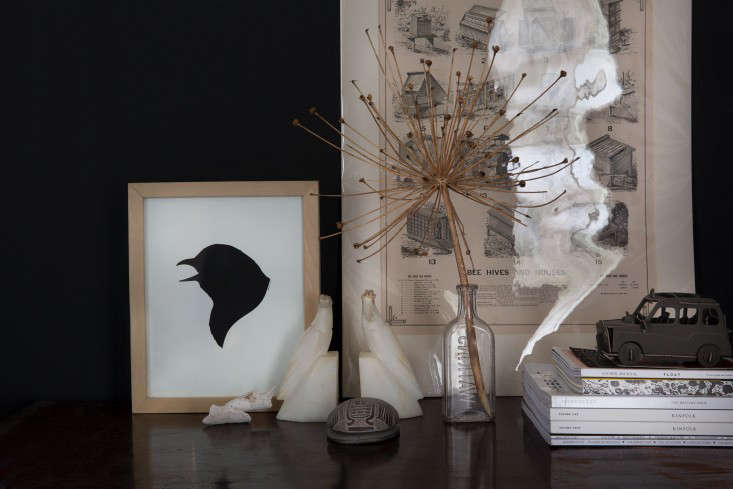 Above: The couple displays rotating groupings of objects around the house, usually based on a color story or contrasting textures. In the guest room, the cut paper silhouette is by artist and friend Jenny Lee Fowler, the bird-shaped marble bookends are from Matt’s mother, who is an antiques dealer, and the paper car came from Muji in Paris. 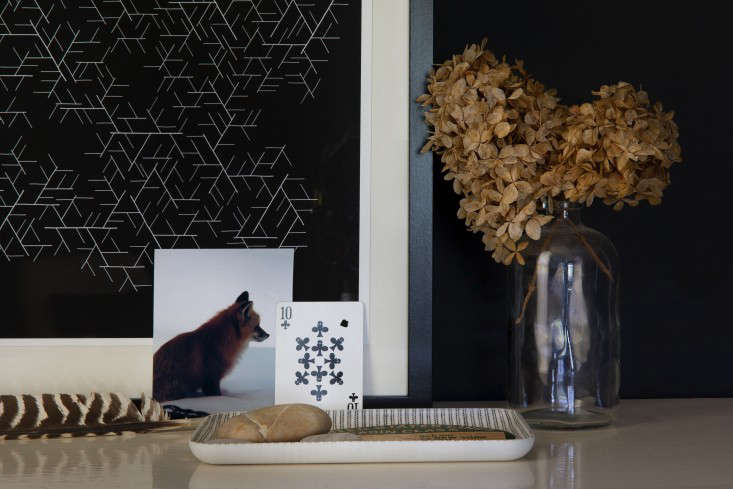 Above: “The black-and-white print is by our friend Halsey Chait, whose work we represent in our showroom,” Megan says. “I have a thing about foxes, so a friend gave me this photo on one of her visits. We found the playing card on a trip to Paris, and the feathers and rocks are natural objects that we’re always dragging in from the property.” 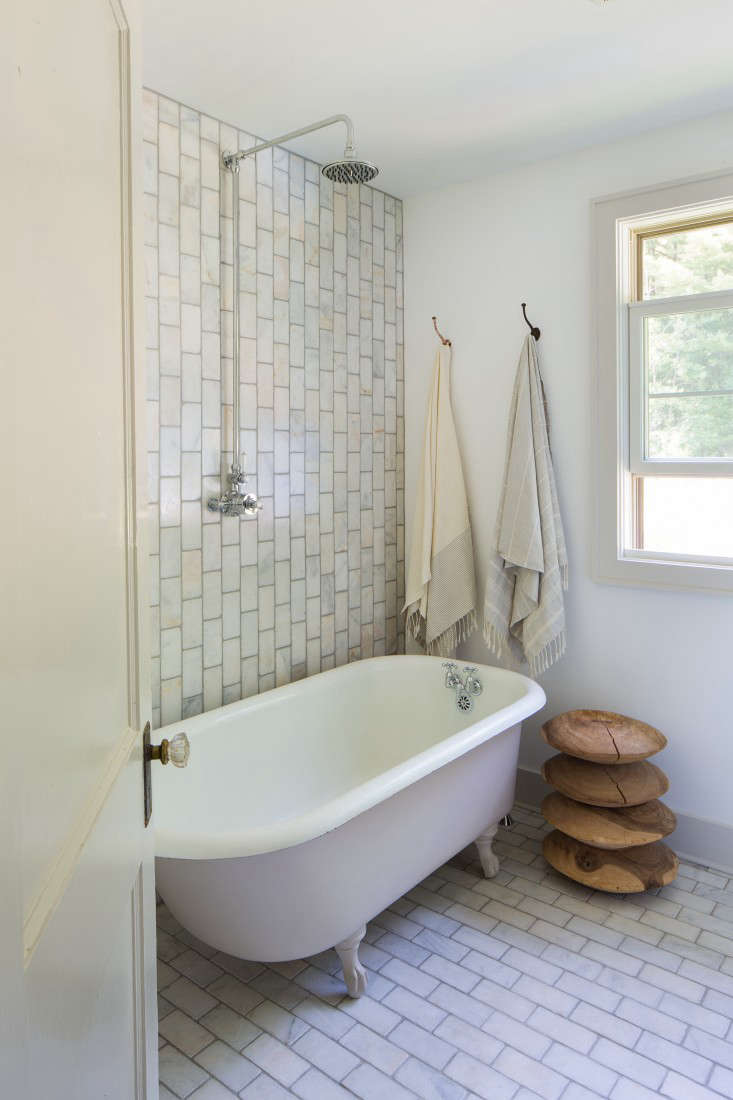 Above: The subway tiles in the bathroom are rough-tumbled Turkish marble, sourced from a discount wholesaler in New Jersey. Because the tiles have an uneven surface, they were double glazed with a matte sealant to protect them from the light gray grout application. The bathtub is vintage; the exterior is painted in Elephant’s Breath by Farrow & Ball, and the Rigid Riser Shower Kit is from Hudson Reed. Turkish towels hang on vintage hooks. “We decided to leave them different because we always like something to be slightly off in our spaces,” says Megan. “We’re not fans of things that are too symmetrical or perfect.” The wooden “beads” by the bath are offcuts of African hardwoods that the designers found in a dumpster in Brooklyn and use as side tables. 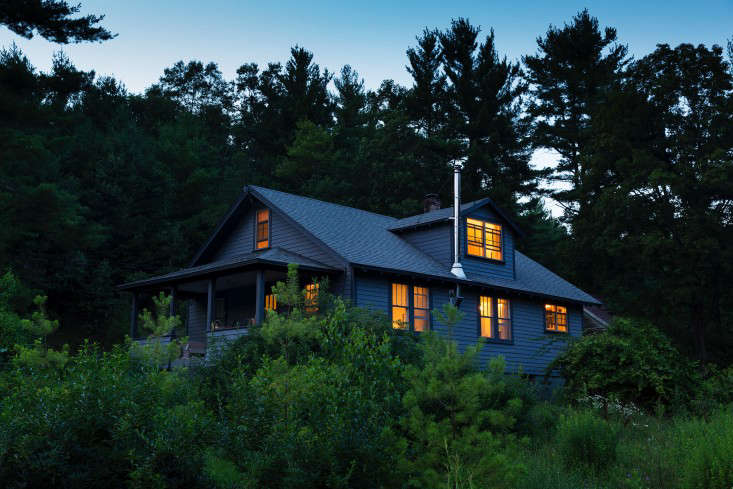 Above: Megan and Matt painted the exterior of the house in Trout Gray with Witching Hour on the trim, both by Benjamin Moore. 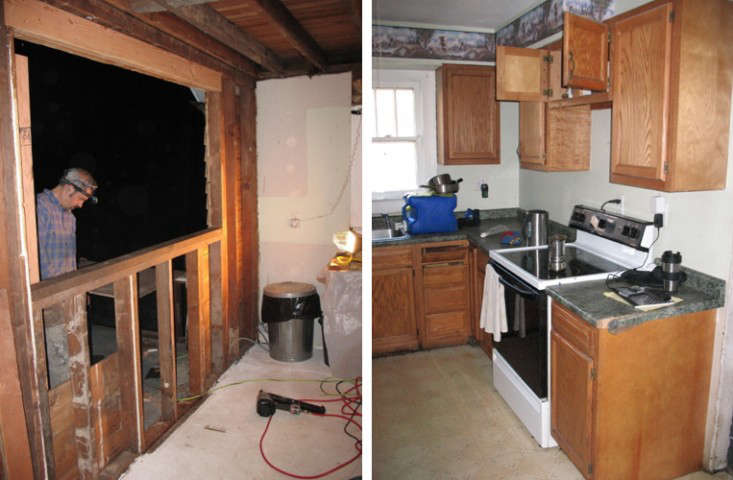 Above L: The couple replaced the windows with Marvin Integrity double-hung units, making the house significantly more energy efficient. Matt, a self-taught woodworker, became a master of all trades; he’s shown here installing the large window over what is now the kitchen stove. “We did all the work on the house ourselves, so in the beginning, we often wound up working all hours of the days, nights, and weekends.” Above R: A view of the kitchen before the wall between the living room and kitchen was removed. 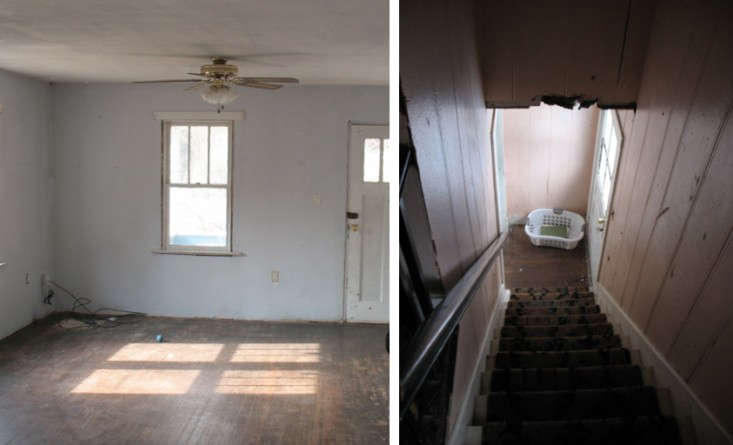 Above L: The living room with the original Douglas fir flooring covered in layers of varnish. Above R: The staircase before the designers ripped out the the overhead wall, carpet, and paneling and replaced the door at the bottom right with a large window. 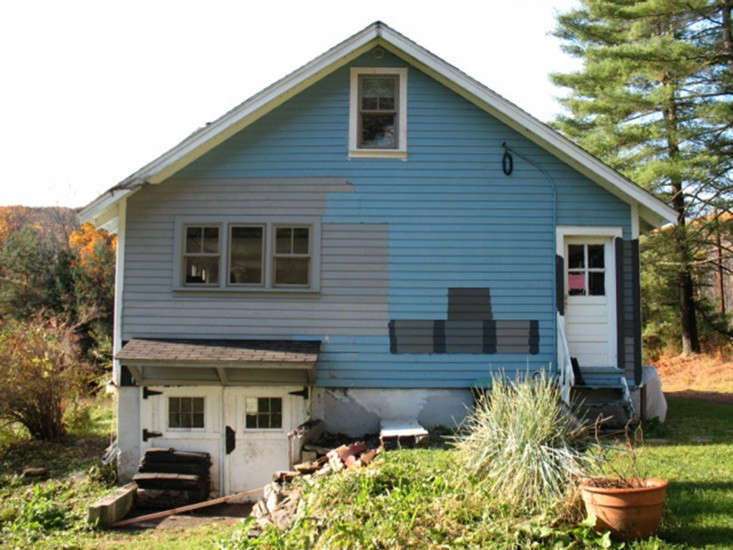 Above: The house that Megan and Matt bought, pre-renovation.

The Materia Designs showroom in Kerhonkson, New York, is open by appointment only. Looking to overhaul your own place? Have a look at Reader Rehab: Danielle’s DIY Kitchen Remodel for Under $500 and Back from Black: Repainting the Bath from Dark to Light. And for inspiration, see another north-of–New York City renovation, An Architect’s One-Room Family House.

On Gardenista, take a look at a 186-square-foot garage transformed into a guest cottage, aka The Grottage.

Kitchen of the Week: A Hamptons Kitchen with a Custom Island Sourced on Etsy