It’s become an annual tradition at Remodelista: For Thanksgiving tabletop inspiration every year, we see how our friends at Le Marché St. George, a cafe and market in Vancouver, celebrated (it helps that Canadians are ahead of us–their harvest holiday falls on the second Monday in October). Last year, the festivities took place outdoors in the highlands of Eastern Washington State–see Into the Wind: Canadian Thanksgiving. This year, Le Marché’s three owners–sisters Janaki and Klee Larsen and Janaki’s husband, Pascal Roy–gathered family and friends at Le Marché itself. With foraged branches, juice bottle vases, a painter’s rag napkins, they transformed the shop into a romantic dining room. Come step inside. 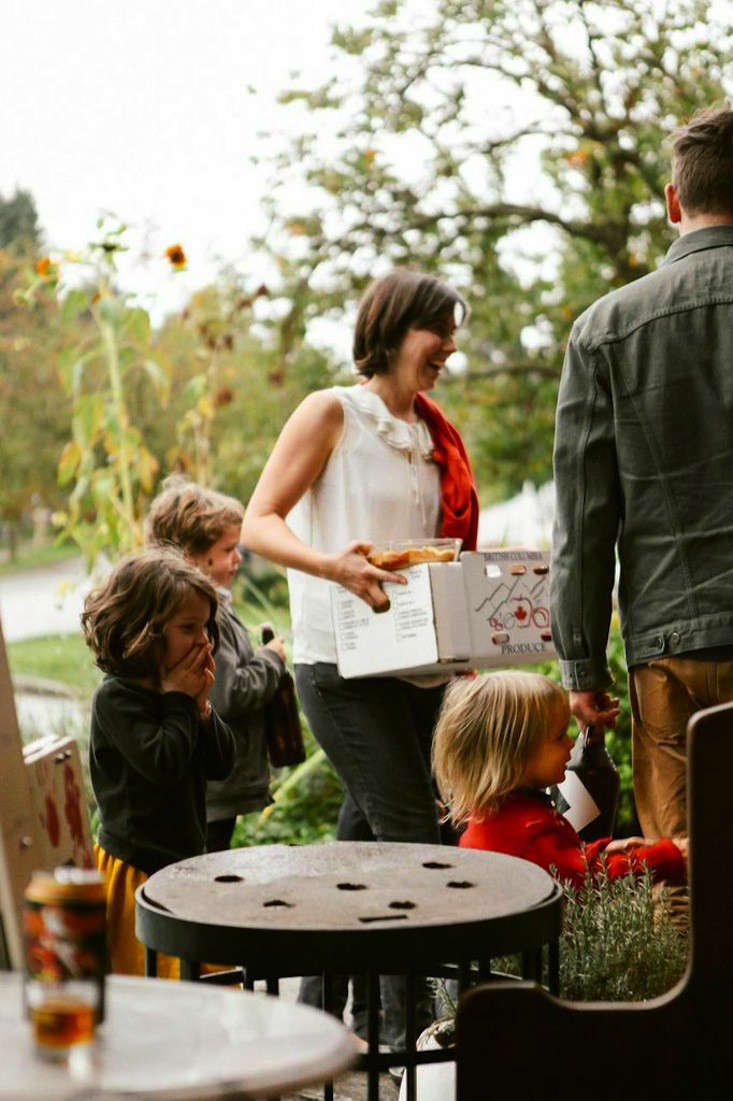 Above: Friends Lance and Aimee arrive with their kids and a box full of this year’s favorite dessert: spicy apple pie. Janaki and Pascal’s daughter, Lola (in the yellow skirt), holds her hands over her mouth in excitement. 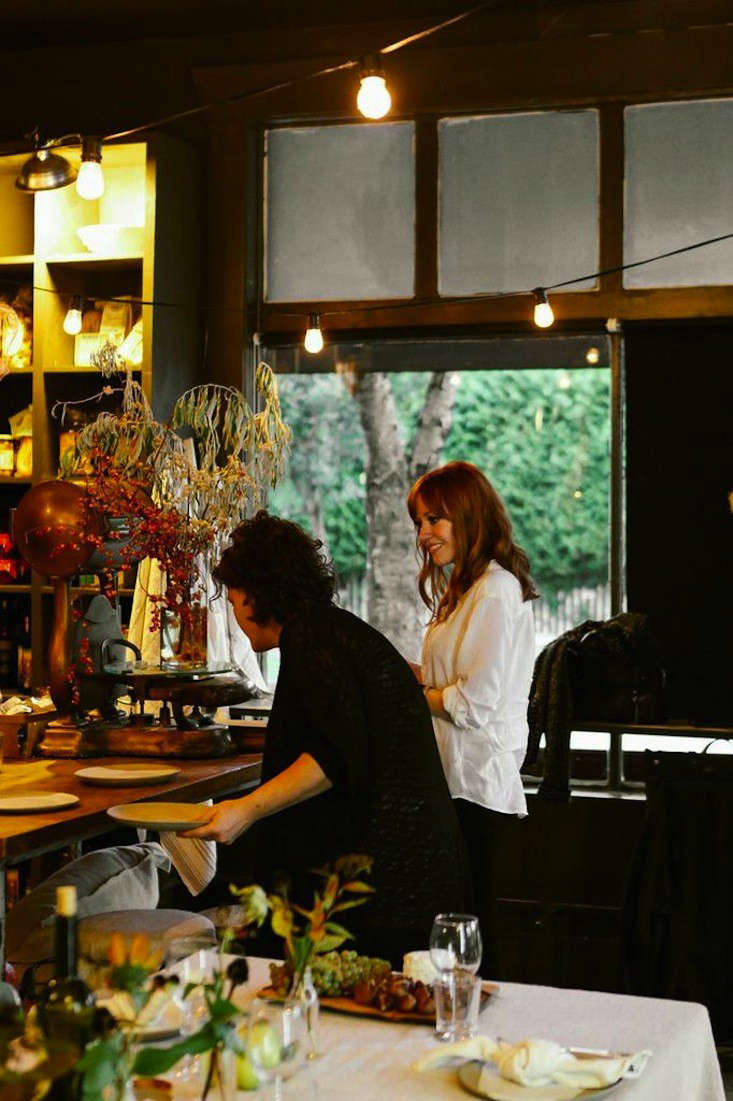 Above: Janaki (shown here at left with her friend Sarah Klassen) spearheaded the cooking and decorating, assisted by her young daughter: “Lola was in charge of laying silverware, prepping the juice, and decorating the table: She added one chestnut on each plate.” 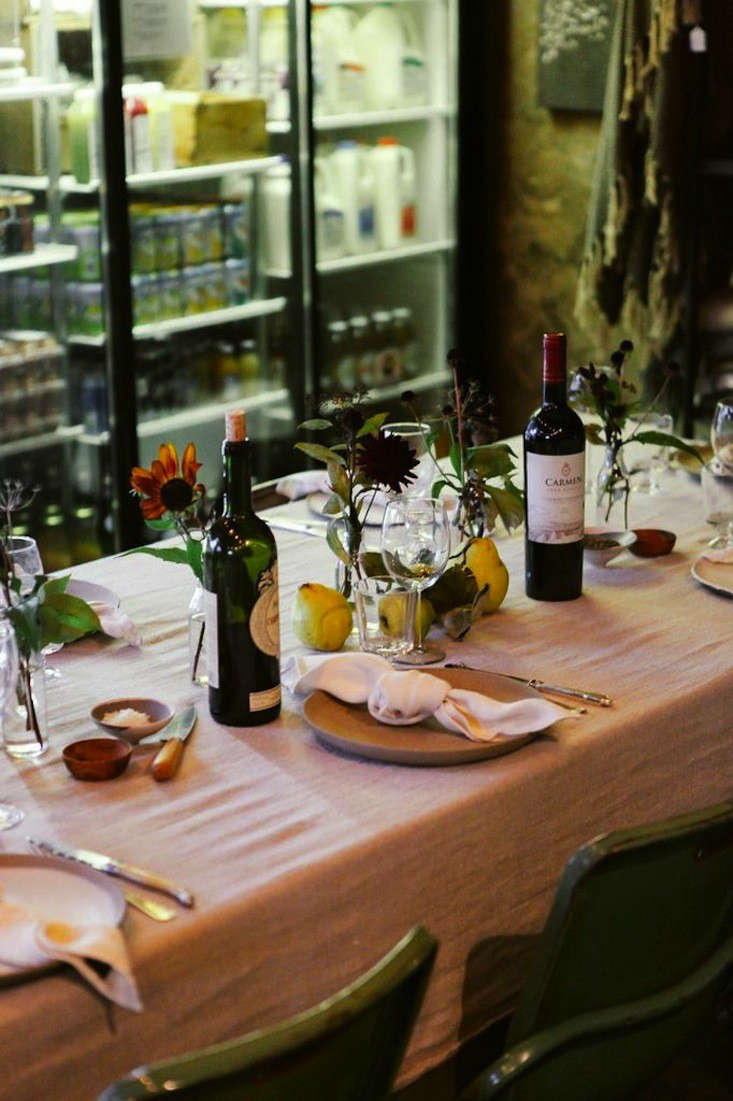 Above: “The table was adorned with my usual casual array: “Lots of fall flowers and branches from our garden, including quince–they’re so beautiful, we simply laid them out here and there,” says Janaki. “This time of year, most plants are in their seed-head stage, which is so sculptural and textural.” Note the shop’s fridges, visible but somehow unobtrusive in the background. 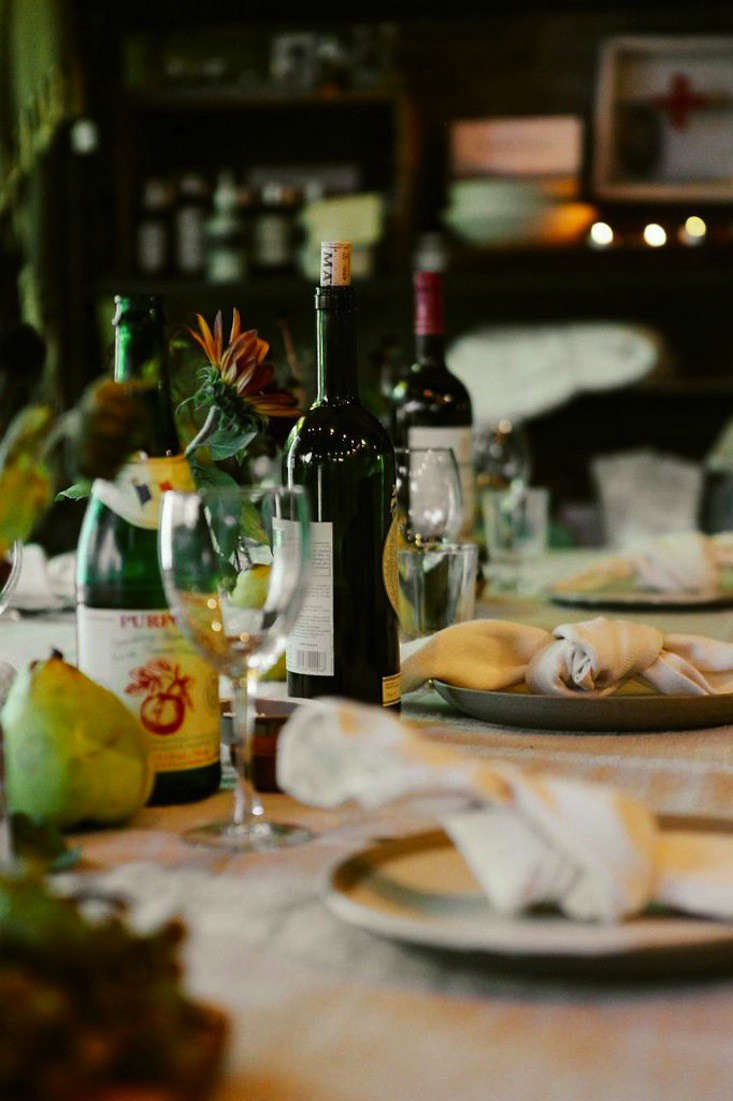 Above: The table was topped with a linen tablecloth and set with mismatched silver cutlery, knotted napkins created from muslin painter’s rags, and plates handmade by Janaki, who is also ceramic artist. “We always serve plenty of wine and sparkling French apple cider for the nondrinkers,” says Janaki. “The only thing I ever match is the glassware; in my mind, it makes a table of mostly mismatched elements feel intentional.” 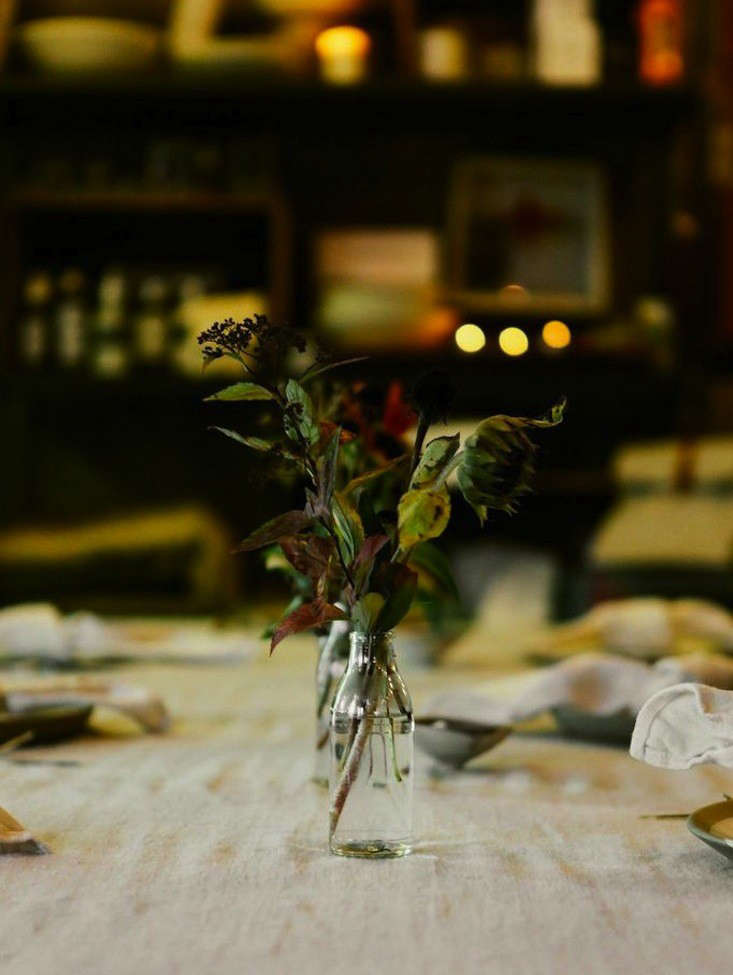 Above: “We collected the little glass bottles throughout the week at the cafe: They’re Italian juice bottles.” 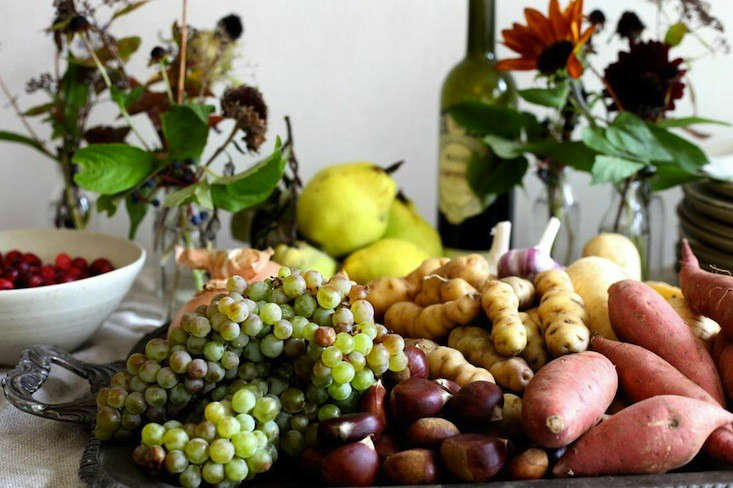 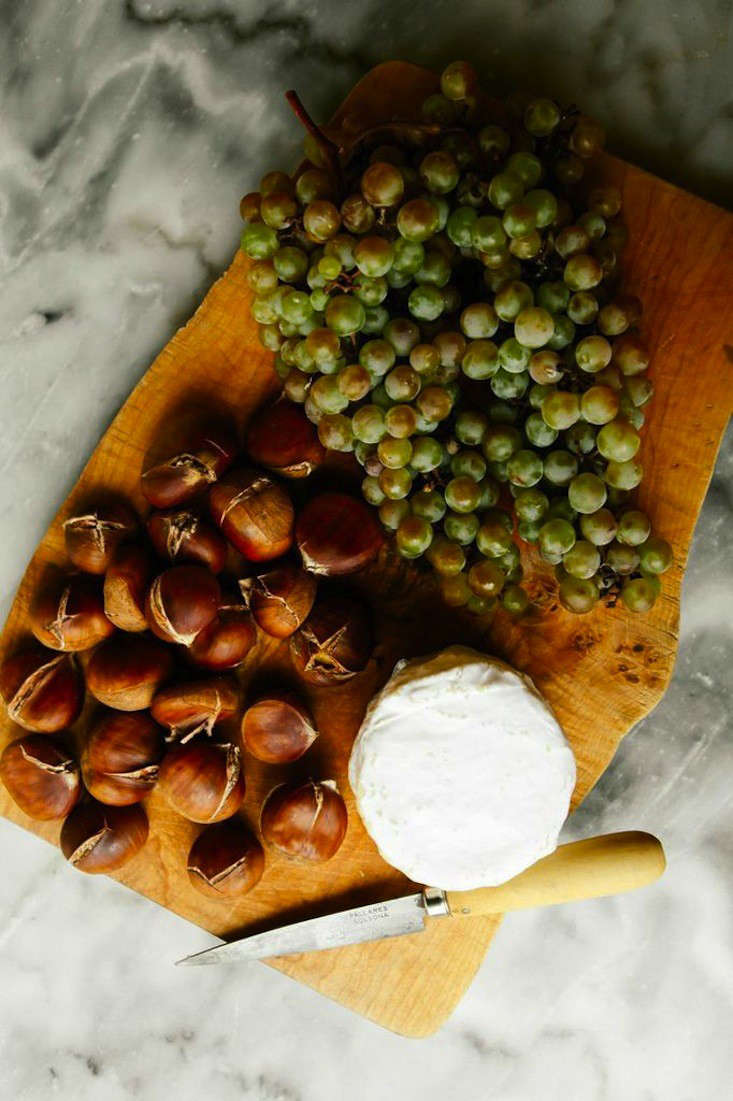 Above: “The roasted chestnuts were brought to us by our local cheesemaker”, says Janaki, who served them as an appetizer with Farmhouse Camembert and champagne grapes. The cutting board is by Tuscan artist Andrea Brugi and the knife is from Catalan company Pallares Solsona (both will be available in Le Marché St. George‘s soon-to-launch online store; stay tuned). 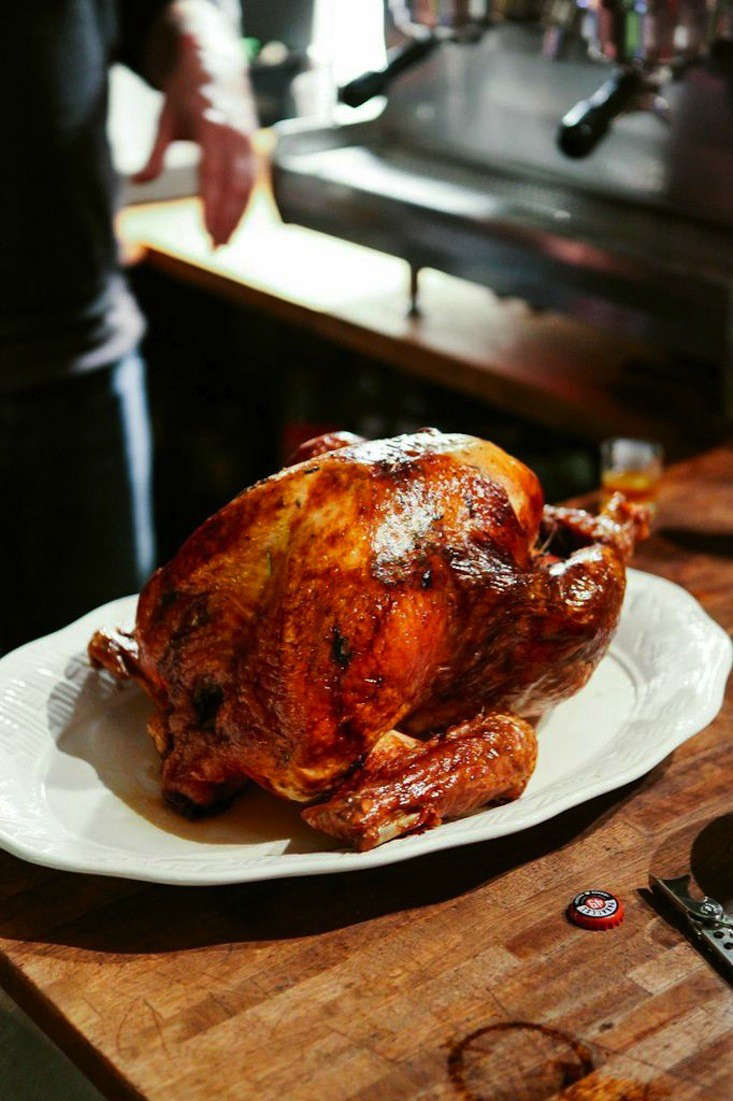 Above: Yes, turkey is the center of Le Marché’s Thanksgiving. The secret to the perfect bronze? Janaki prepped the bird with lots of butter mixed with chopped fresh herbs, and rubbed garlic on and under the skin. “I usually cook the turkey for half an hour at 450 degrees, then tent it with foil and turn the heat down to 325 degrees. I always forget that fresh organic turkeys take less time to cook, and often start too early.” 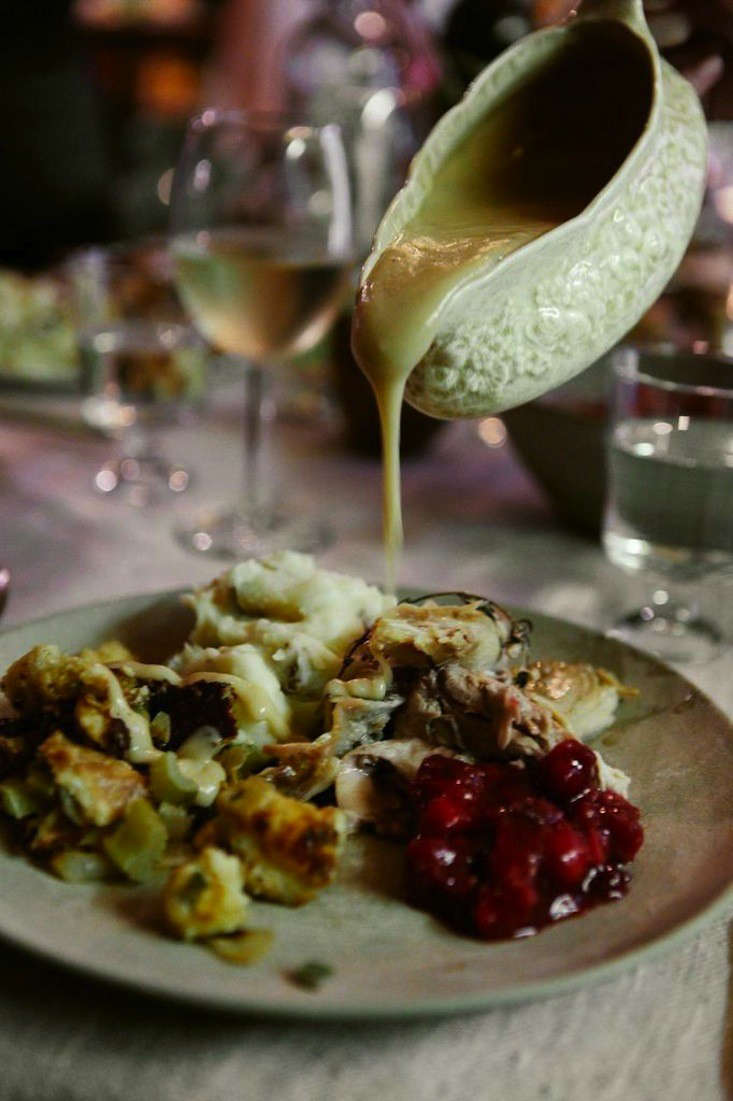 Above: “Klee is the gravy master,” Janaki tells us. “We used an antique gravy boat bought at a thrift store.” 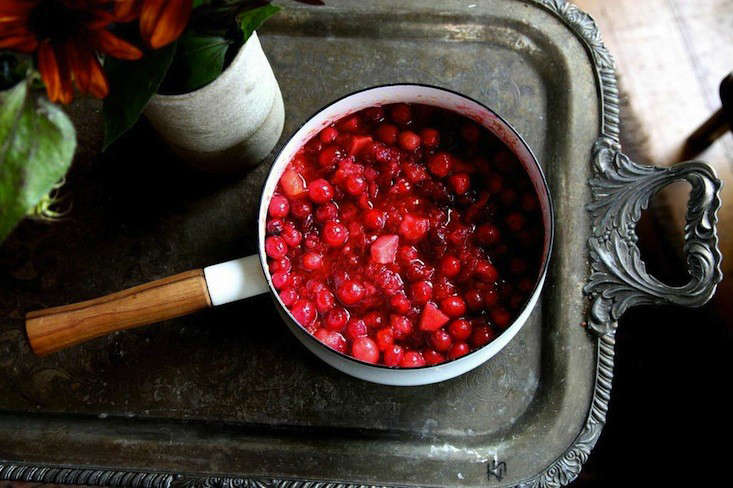 Above: “We had an abundance of quince in the shop this year, so I added them along with Italian prune plums to the cranberries,” says Janaki. “It was a beautiful, aromatic sauce, the perfect fall flavors.”

The sauce is shown here in an enamel Dansk pot on a silver platter: “I love this big silver platter; it carries things up and down stairs all day.” 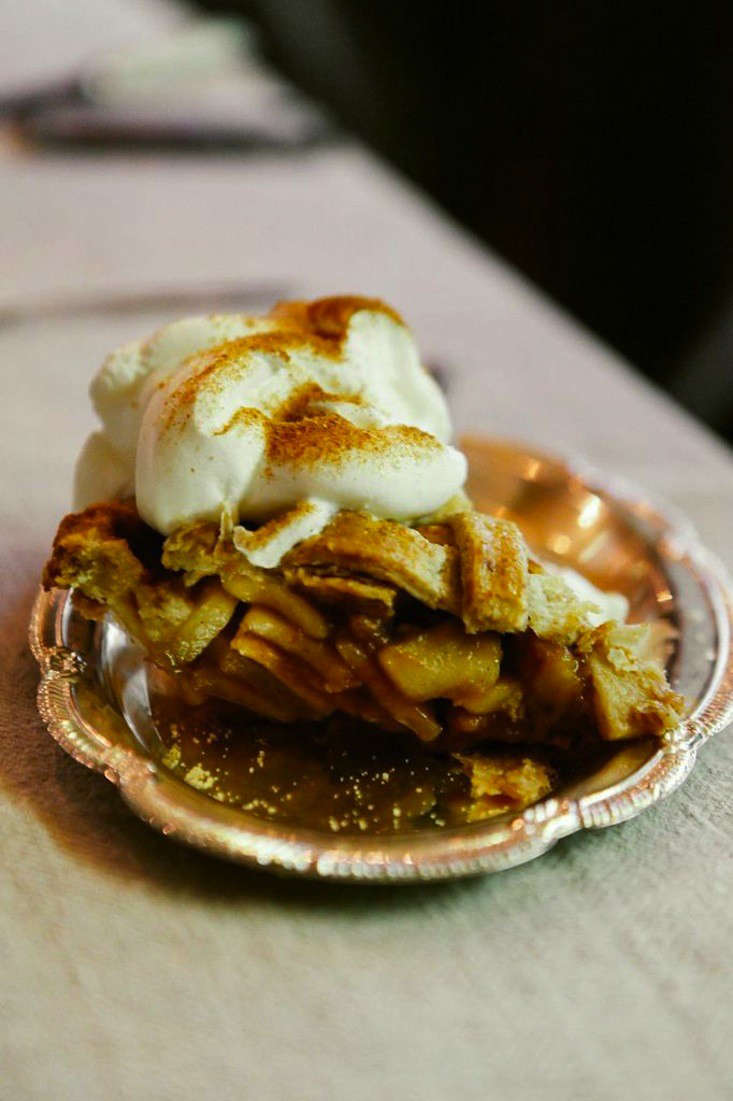 Above: Aimee’s spicy apple pie was served with dollops of whipped cream on mismatched silver plates. 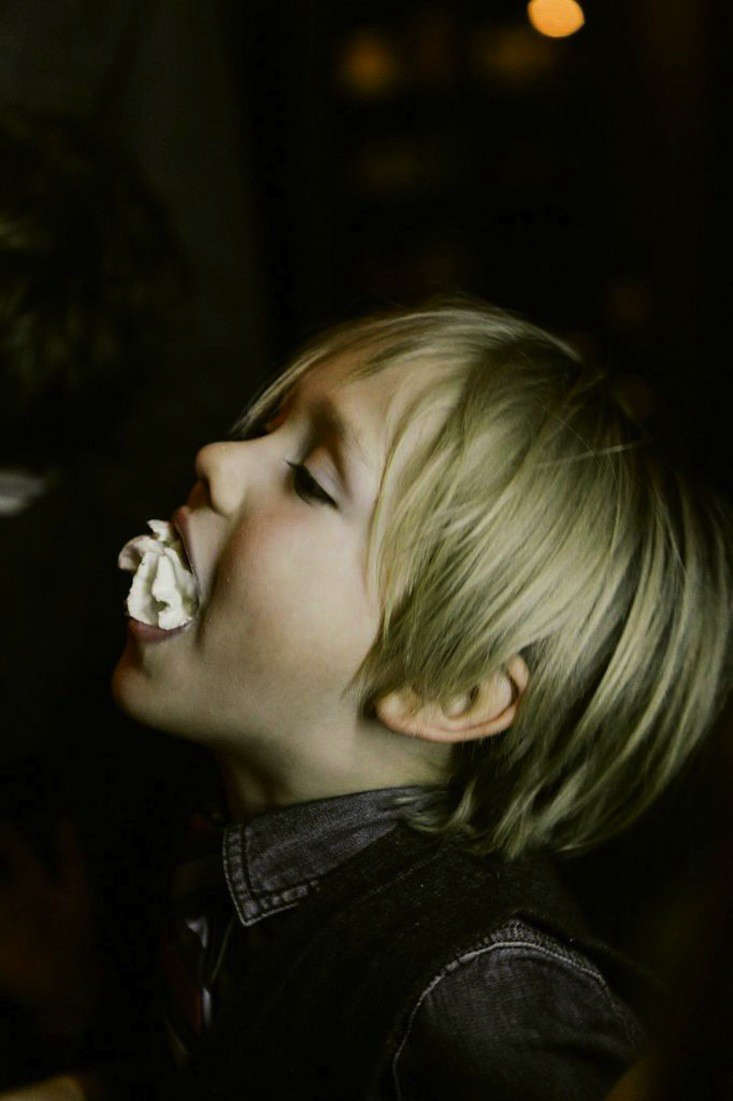 Above: Highlights of the evening? Along with the dancing that capped off the night, one of the biggest hits was the can of whipped cream that made it to the celebration: “What else do you do with a can of whipped cream but spray it right into the mouths of all the kids?” asks Janaki.

Last year’s Le Marché Thanksgiving took place in the woods: See Into the Wild: A Canadian Thanksgiving. If you like the outdoor table setting, learn how to re-create the elements in Gardenista’s Steal This Look: The Last Outdoor Dinner of the Season.

Did you know that Le Marché rents out an apartment above the shop? It’s impressive–see Living Above the Shop Le Marché St. George in Vancouver.