Two years ago, Holly Wulff Petersen and Renée Kemps met while taking a photo workshop “in the middle of nowhere in Sweden.” The two foodies started talking about opening their own kitchen photography studio, “fully functional for cooking,” says Renée, “but definitely made to be beautiful for shoots.”

Between then and now, Renée, who is Dutch and only 24 years old, finished her degree in English at the University of Amsterdam and won the Saveur blog award for food photography (see her blog). And Holly, 31 and from Ireland, continued her studies in cooking and nutrition while also becoming a stylist and photographer. The two recently joined forces and rented an 800-square-foot space in East London. Ponying up an initial £10,000 pounds ($12,660) each—and along the way, spending considerably more—they designed the kitchen of their dreams. Ours, too. Come see. 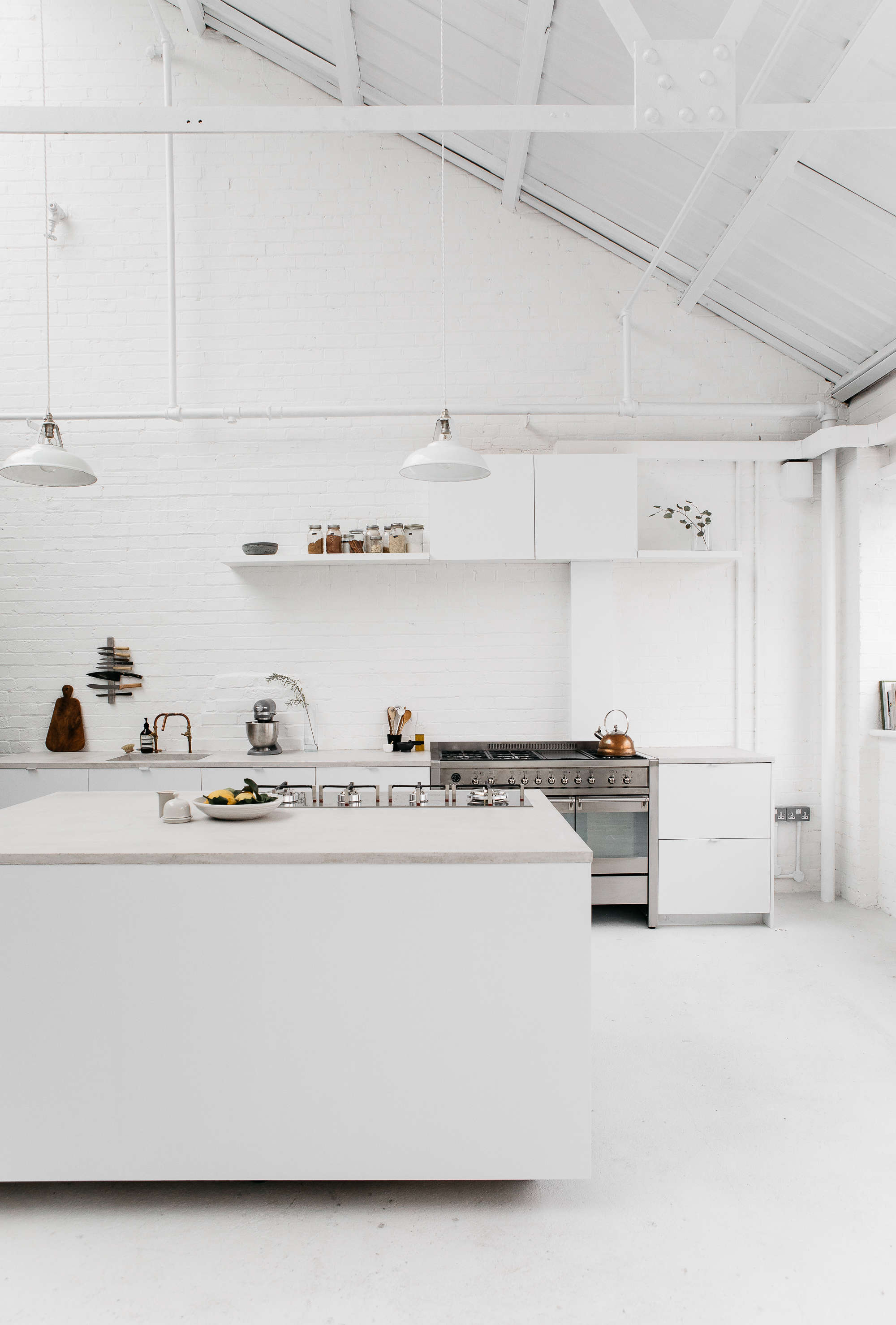 Above: “Nordic, minimalist, and natural, but still cozy and warm,” is how Renée and Holly describe the look they were after. Their studio, Rye London, occupies the top floor of a former print factory with high ceilings and exposed brick walls.

“Our space was old, not well taken care of, and filled with fake walls and dead electrical cables,” they tell us. “We stripped it down, ripped out four layers of flooring, and started with an empty canvas.” 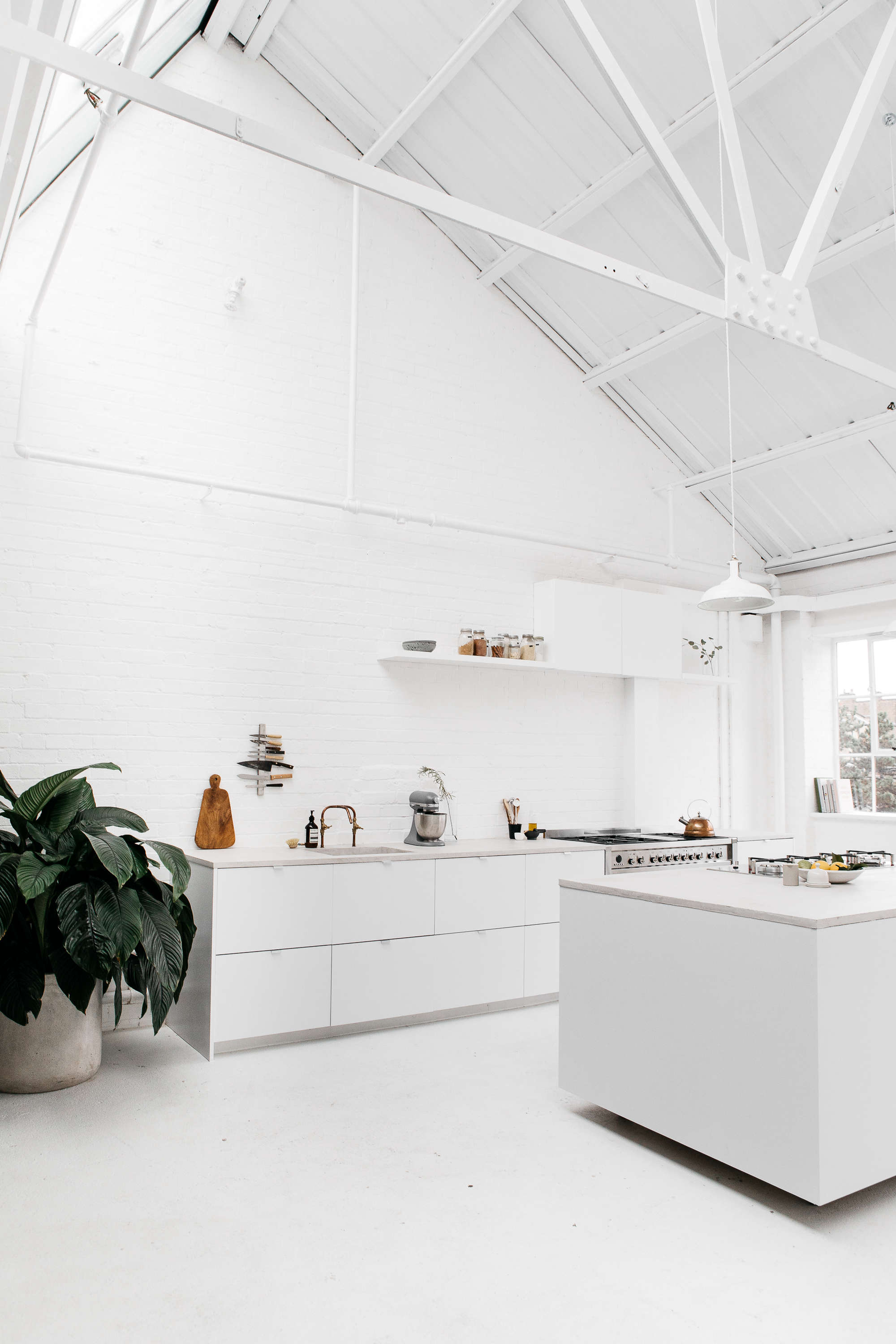 Above: Holly and Renée built their kitchen using Ikea’s cabinet system—”it has really good drawers”—and then customizing it. The stove wall and island have counters of micro-concrete and fronts and sides of marine-grade MDF painted a light gray (a mix they ended up making themselves to get what they were after). 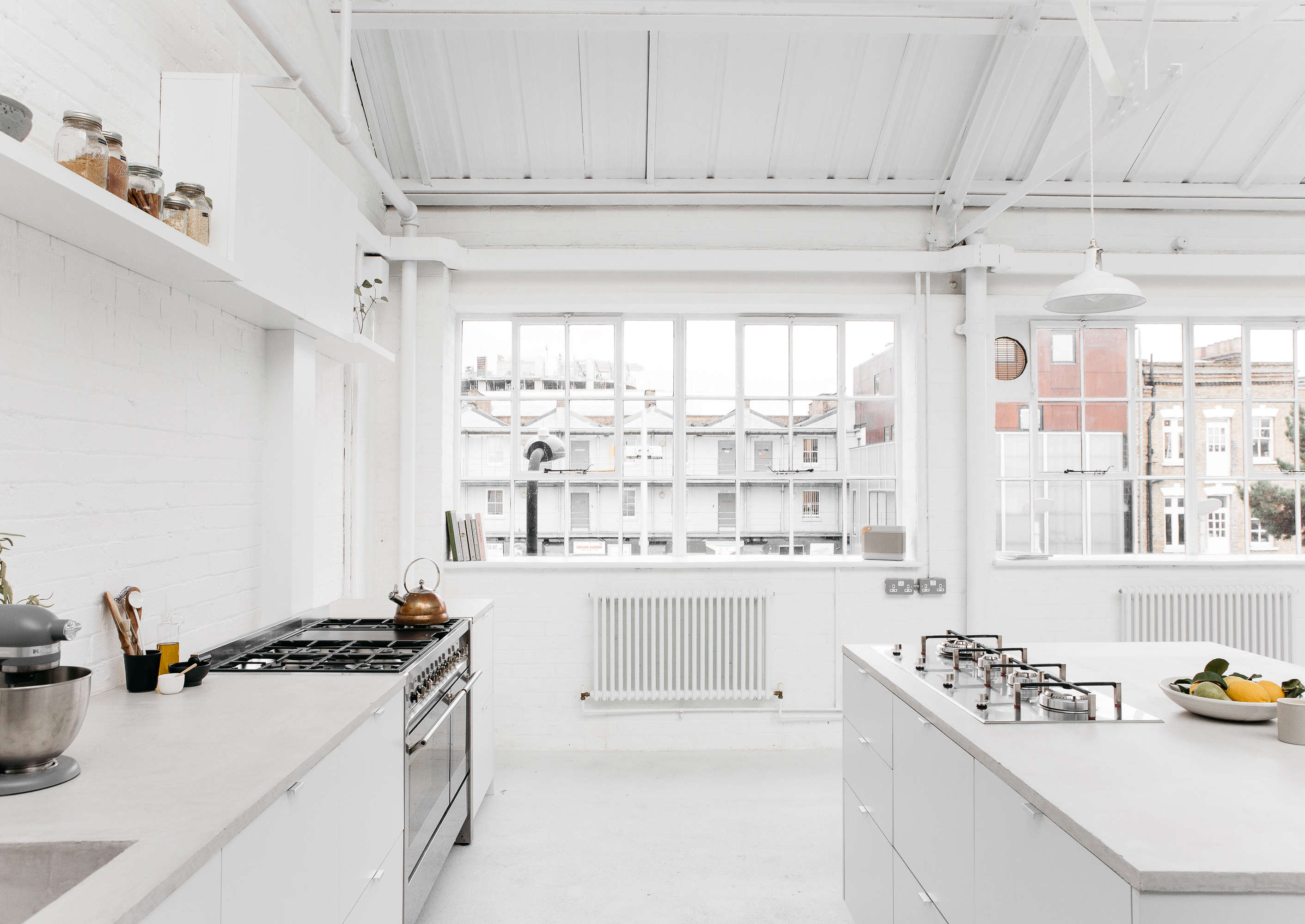 Above: The original windows are still in place and flood the space with light. The kitchen is used for natural light food photography of all sorts, including cookbook and advertising shoots, as well as food workshops and events—Renée and Holly rent out the space to others, use it themselves, and often collaborate with their clients. 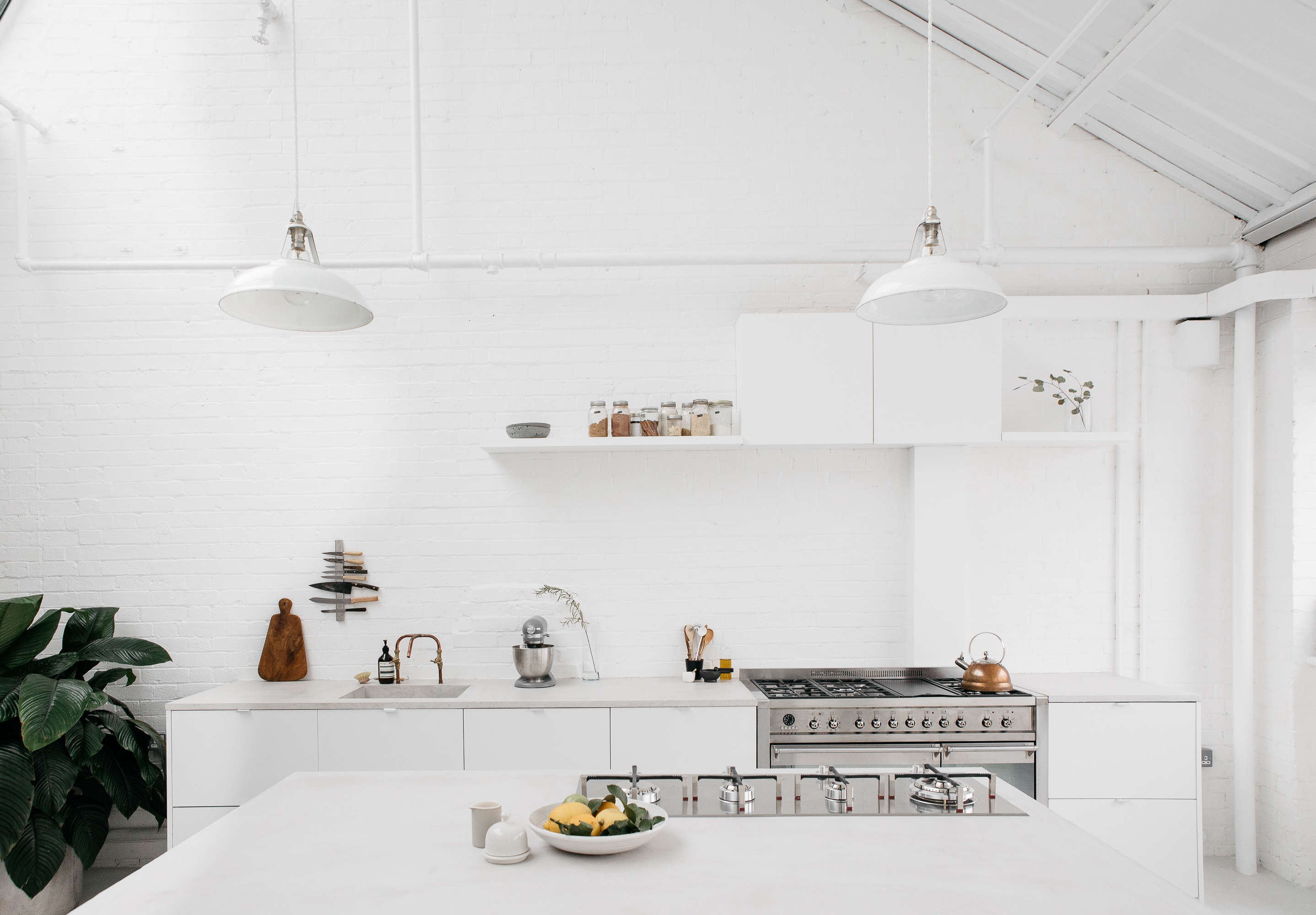 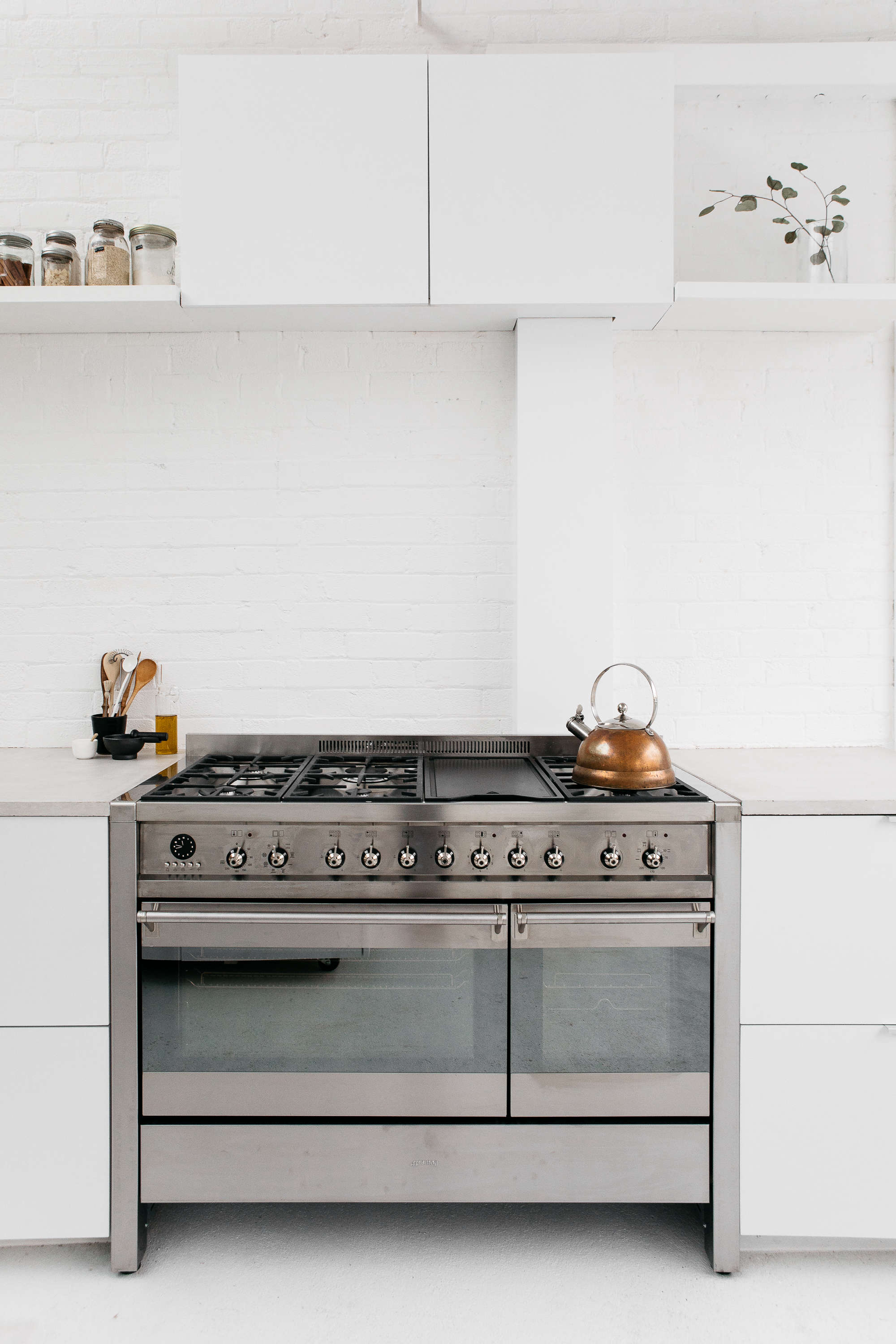 Above: The six-burner stainless gas range is a Smeg “dual cavity cooker” with electric griddle from the company’s Classic line. There’s also a four-burner Smeg stovetop in the island. 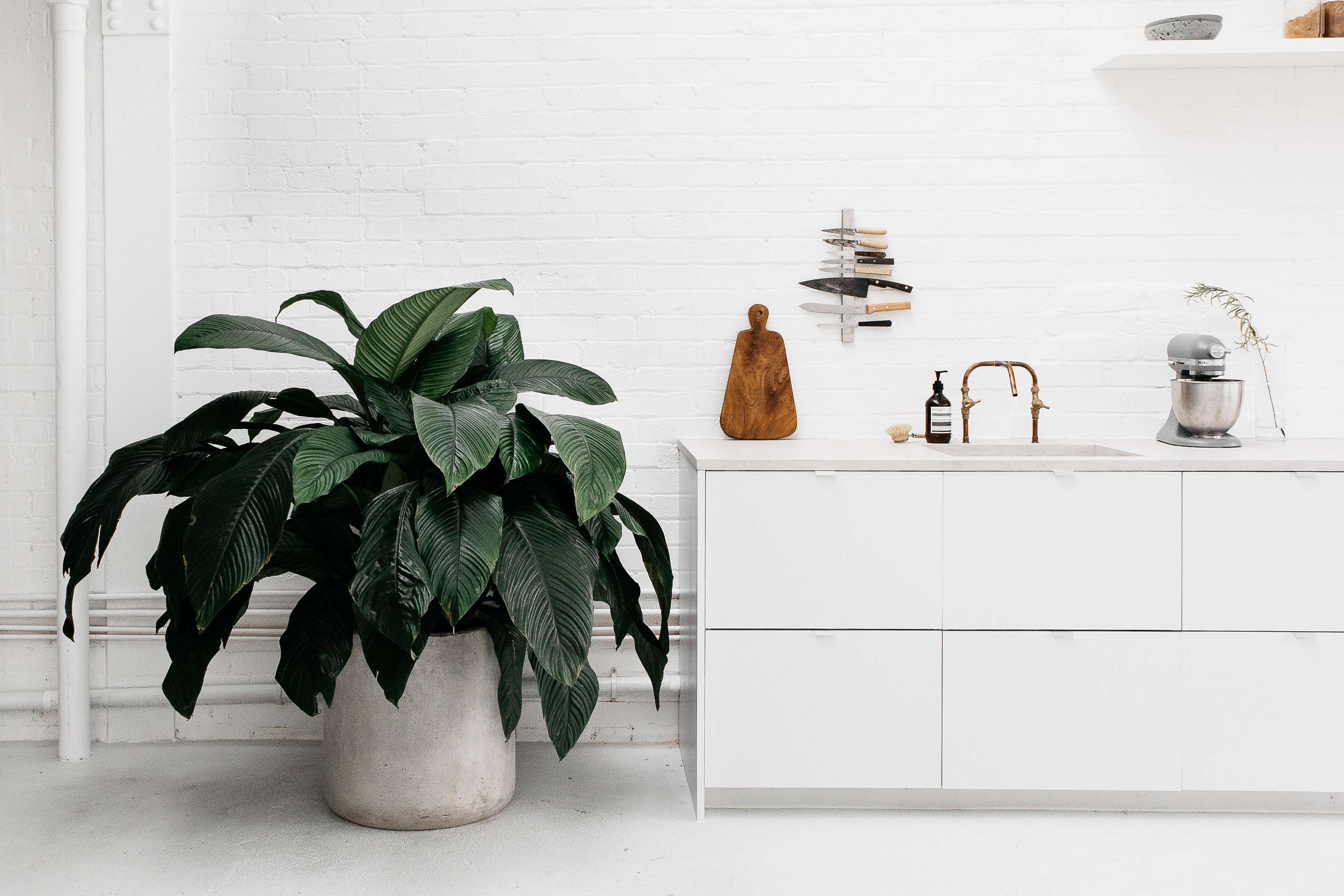 Above: Leafy plants and homemade touches, such as a DIY copper faucet, bring the ethereal setting down to earth. 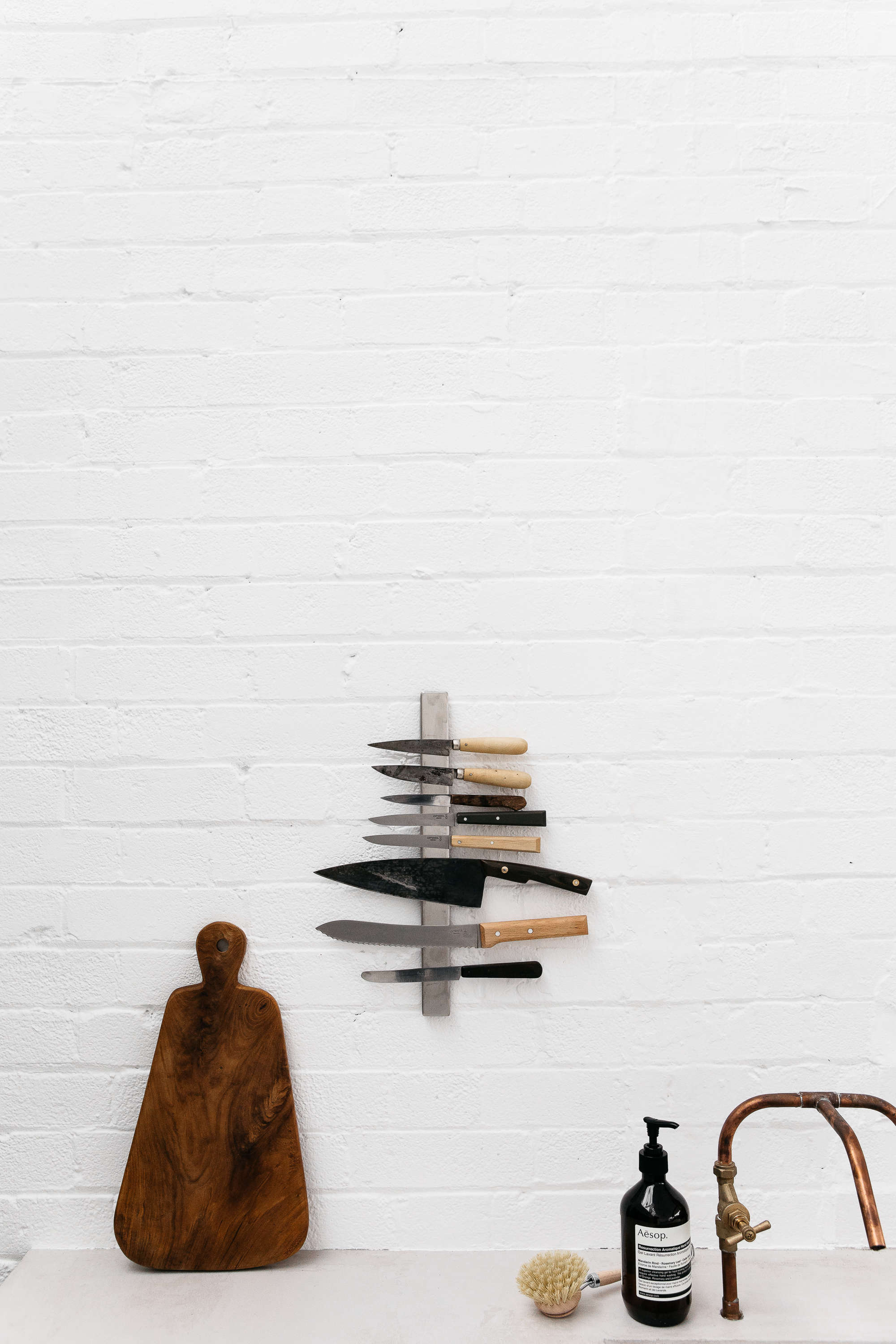 Above: An idea we plan to copy: a magnetic knife rack hung vertically as a decorative element. Of course, nice-looking knives help: The round-handled designs are by Pallarès Solsona of Spain and the handmade cleaver (in the center) is by Fingal Ferguson of West Cork, Ireland (who has a waiting list for his work). As for the faucet, “Our amazing plumber made it from a drawing we gave him,” says Renée. “It’s basically copper piping, ‘the simplest taps you can find,’ as he said.” 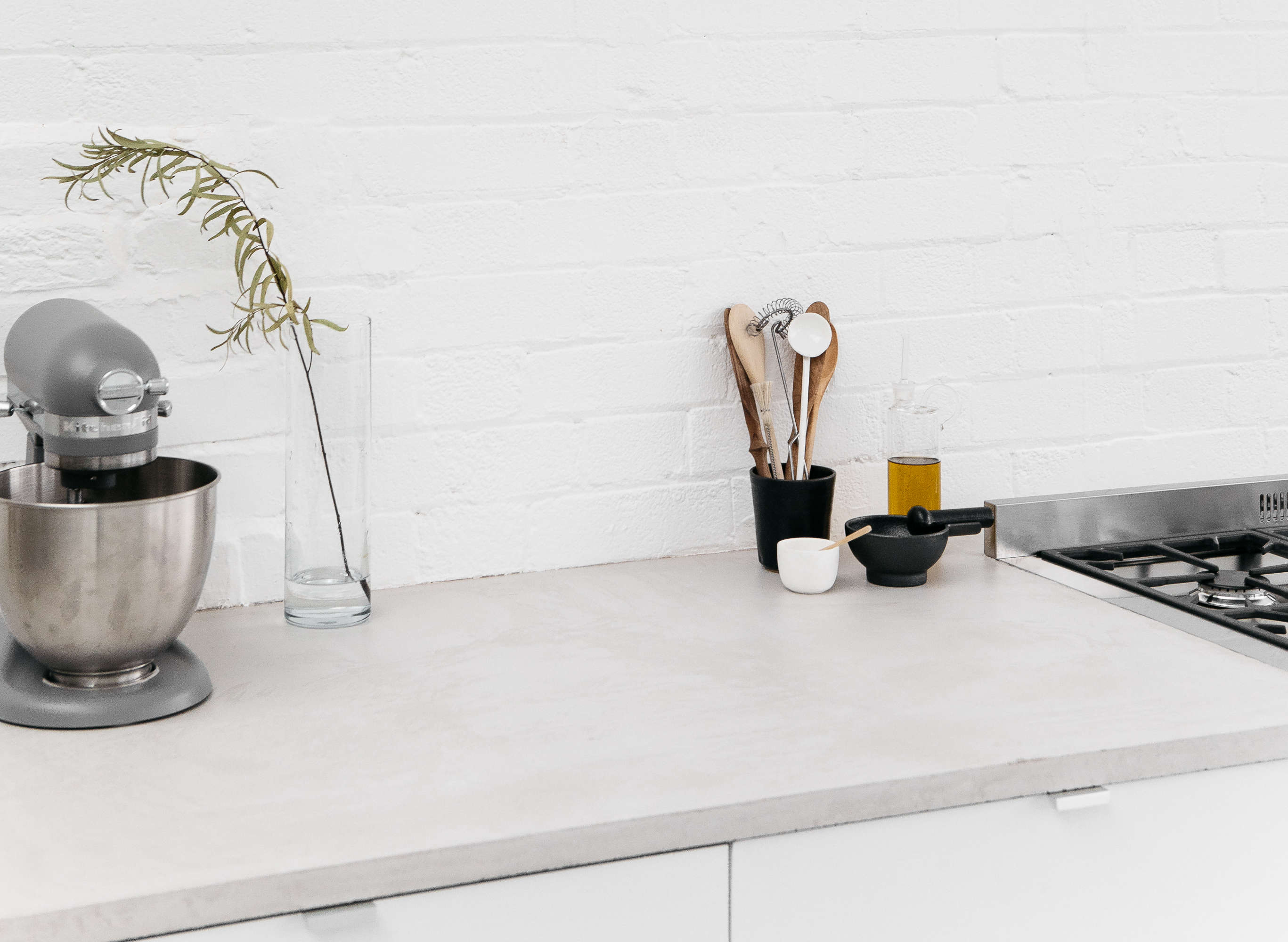 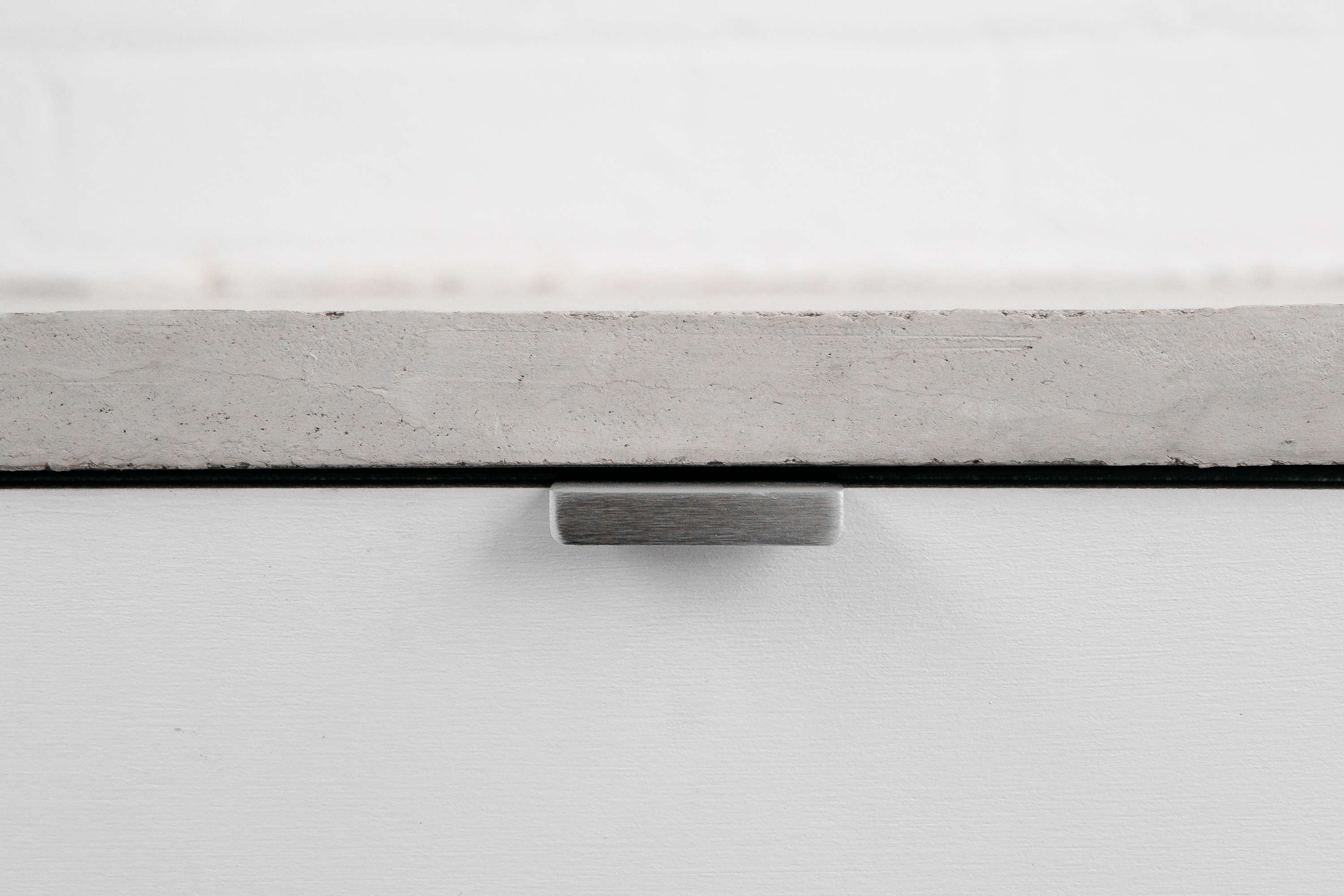 Above: A closeup of the counter with metal cabinet pulls from Ikea (see Remodeling 101: How Kitchen Edge Pulls Changed My Life). Micro-concrete, Renée explains, “chips, which we like, because it shows signs of use. Our floor, too, is raw concrete that cracks and has holes. We think this adds to the whole concept of natural materials and the beauty of aging.” 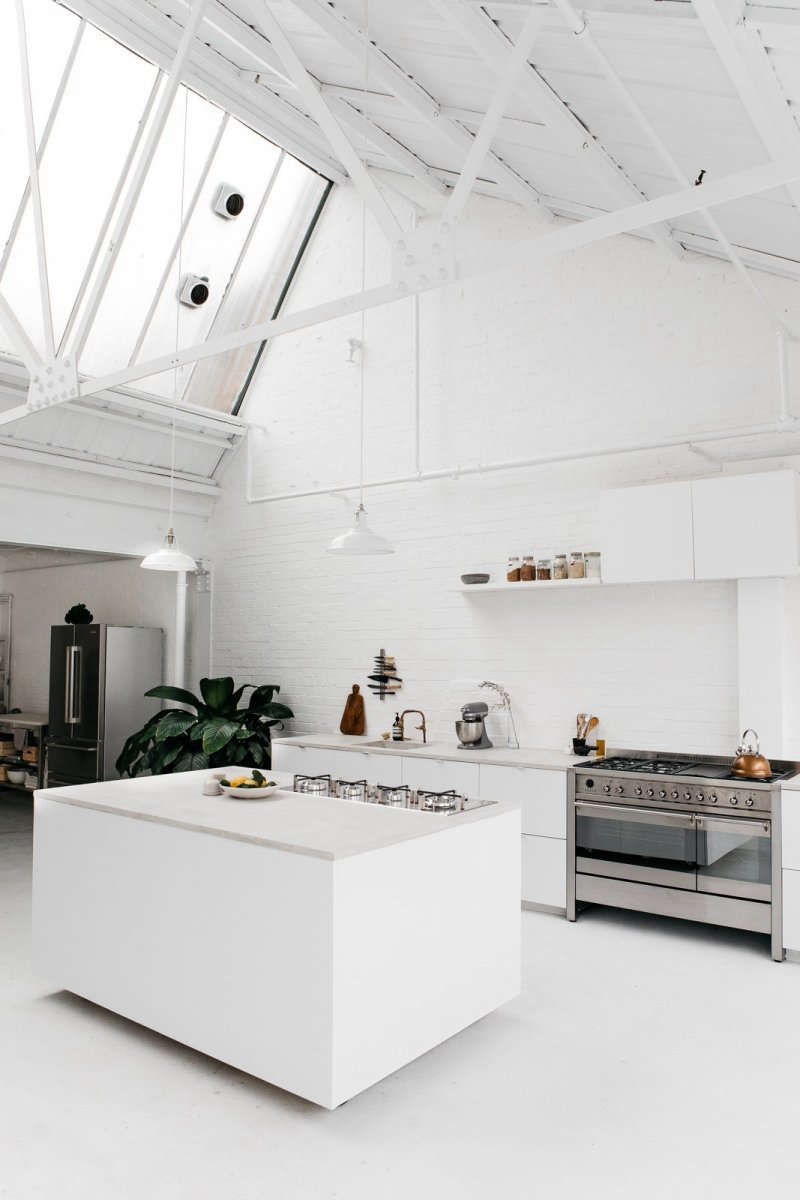 Above: The fridge is tucked out of the main picture-taking area, but within easy reach of stove and sink. The space came with south- and north-facing skylights. 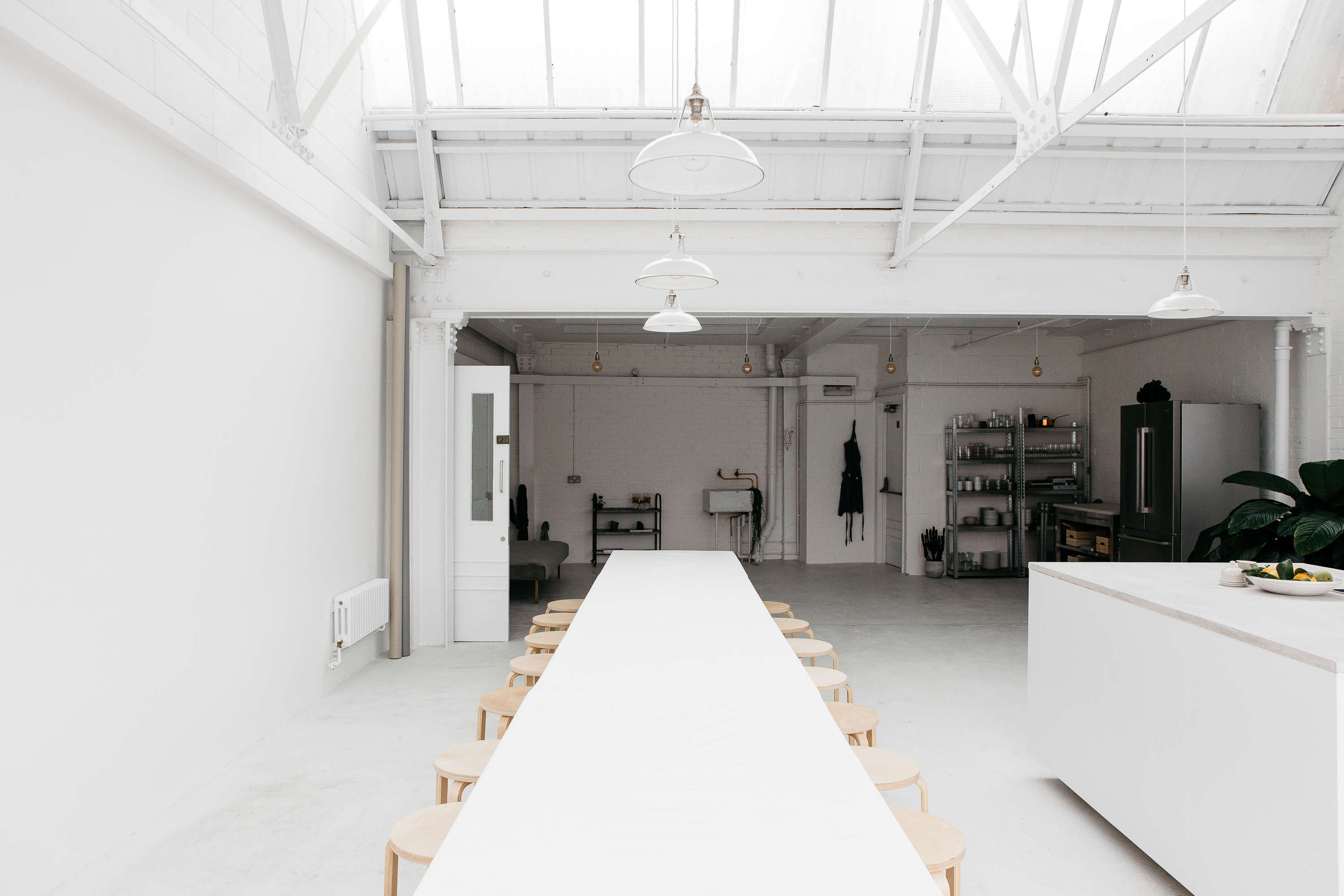 Above: The DIY dining table seats 26. The two women had it made using the metal legs from five vintage folding tables and adding a thin wood top. 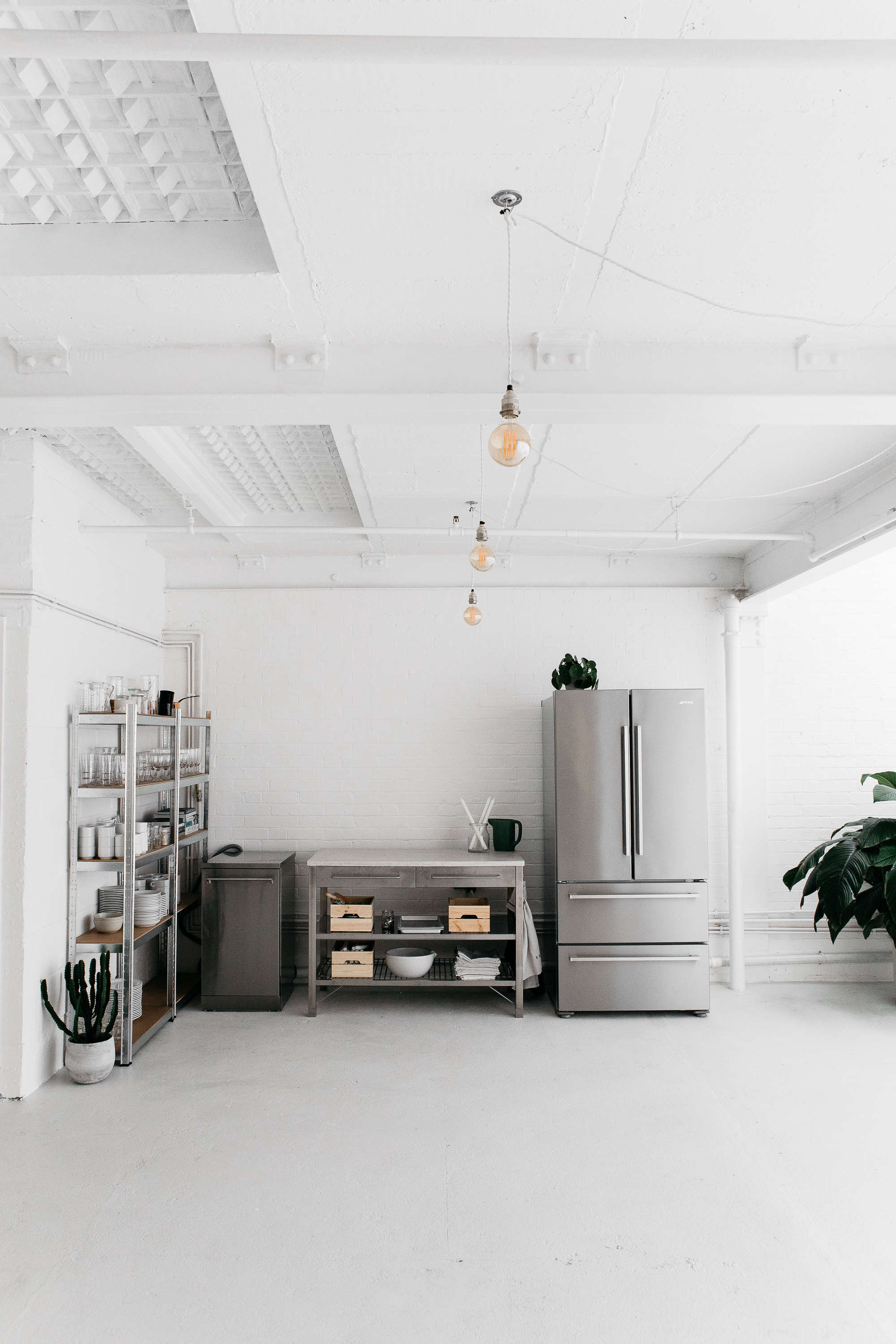 Above: The sizable fridge, a Smeg, shares a corner with a stainless-steel work table, a Smeg dishwasher, and industrial shelving. “We both had a very specific image in mind for the kitchen,” says Renée. “We wanted to highlight natural materials with cracks and imperfections, and to combine them with clean stainless steel.” 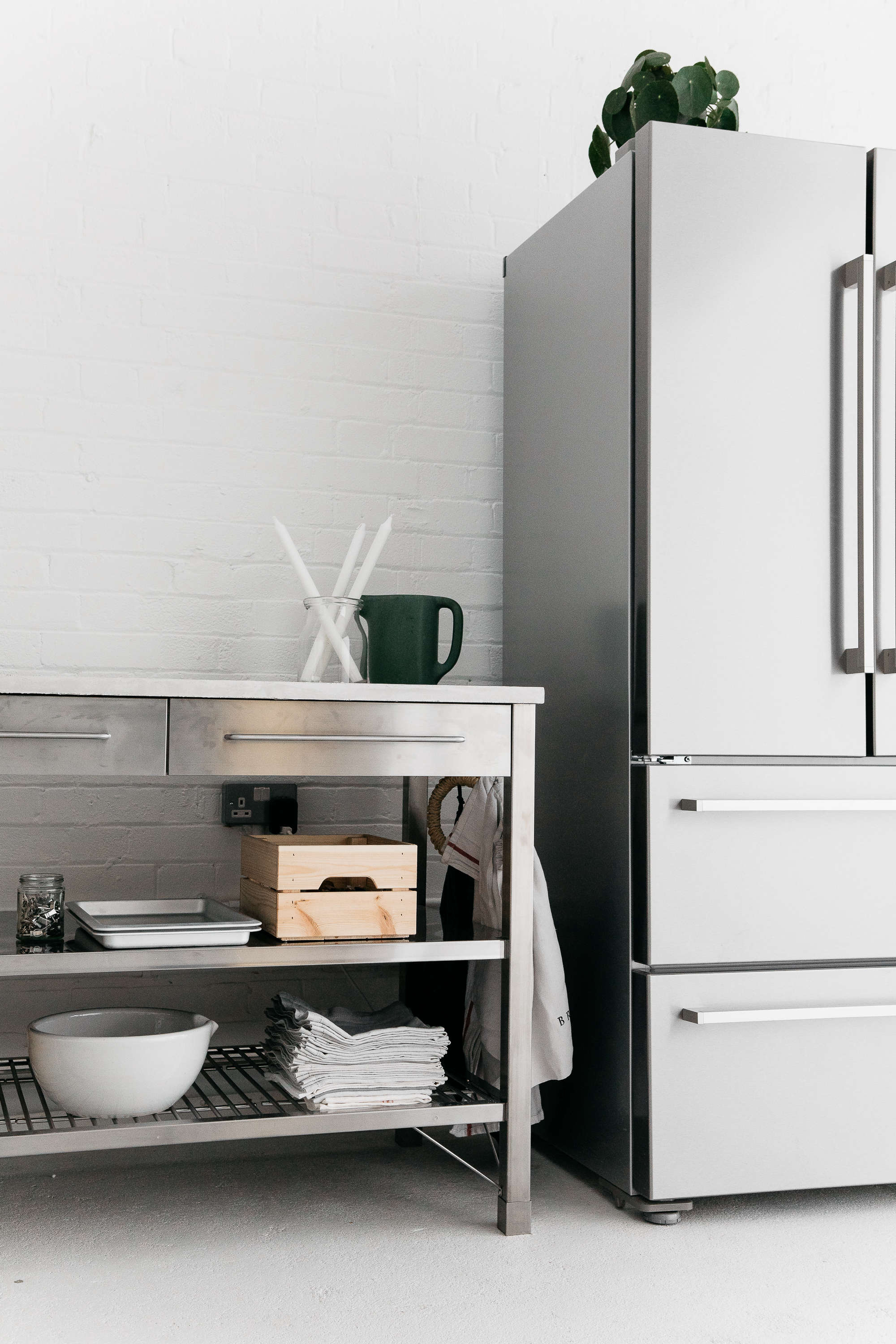 Above: Another Ikea hack, the work table came with a “bulky wooden top; we took it off and applied our own handmade concrete.” 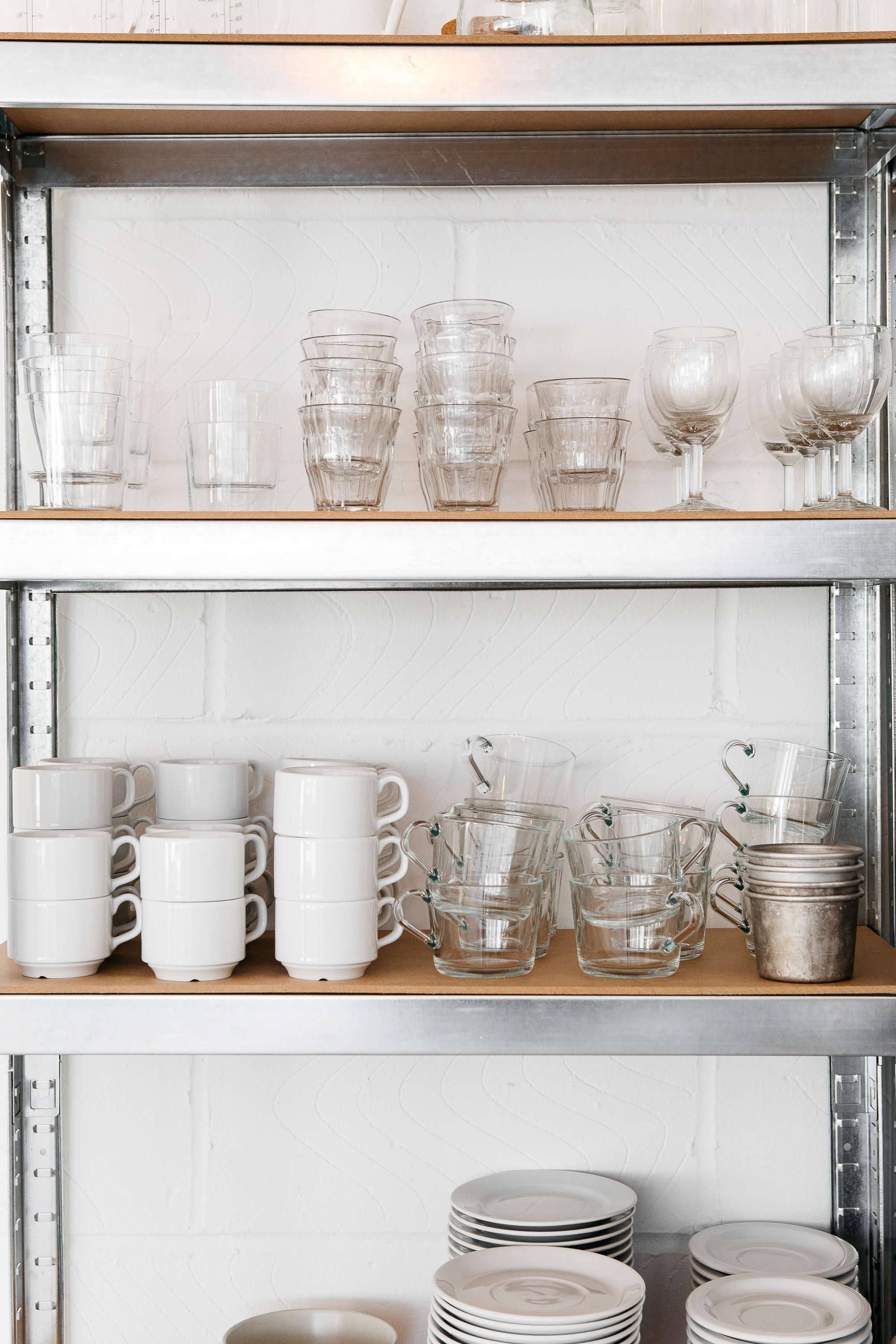 Above: The steel and fiberboard shelving holds sturdy, neutral basics, including tumblers by Duralex. 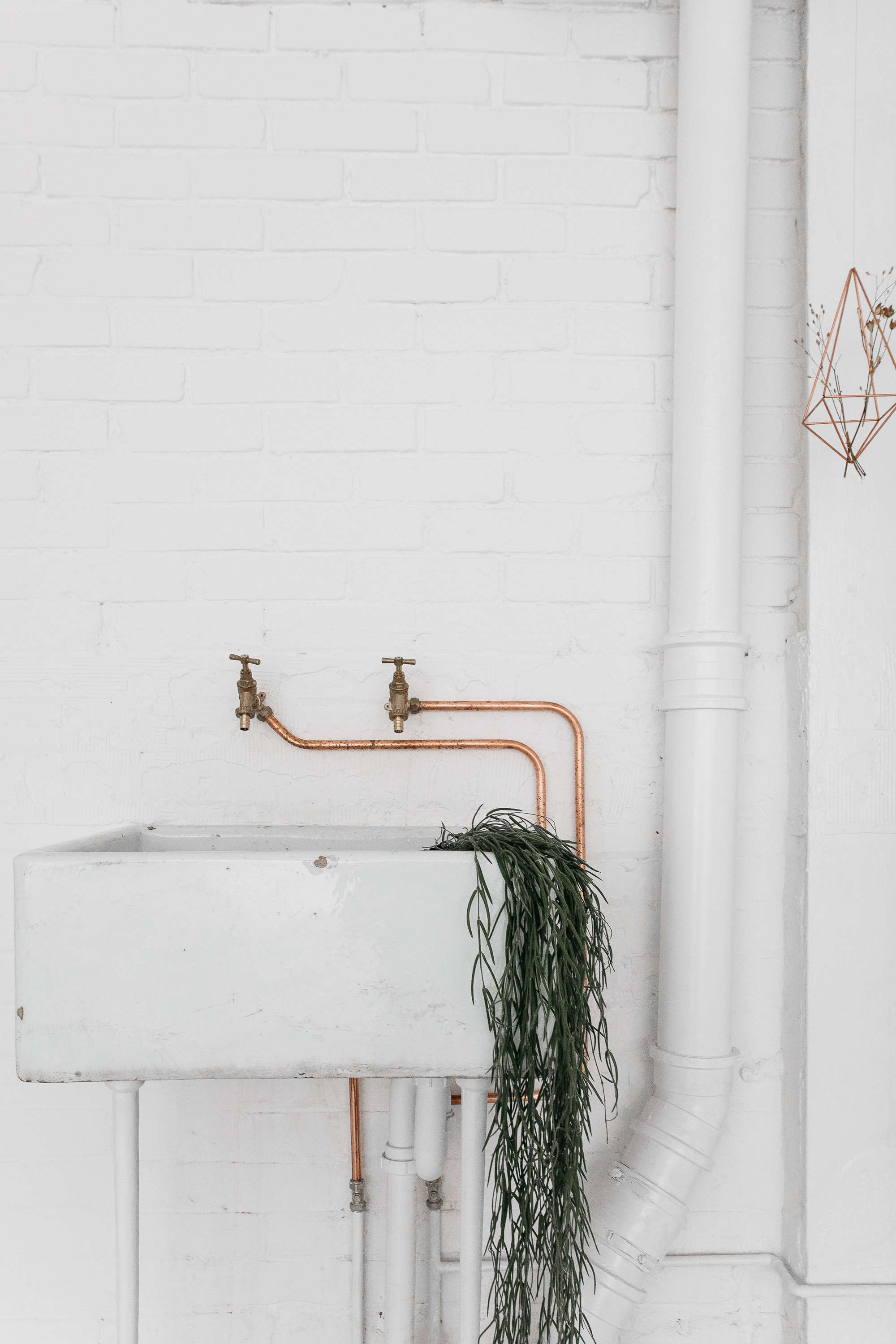 Above: The sink in the back also has plumber-made copper taps. The sink itself was put together using a porcelain basin bought at an antiques shop and vintage cast-iron legs purchased on eBay and painted white. 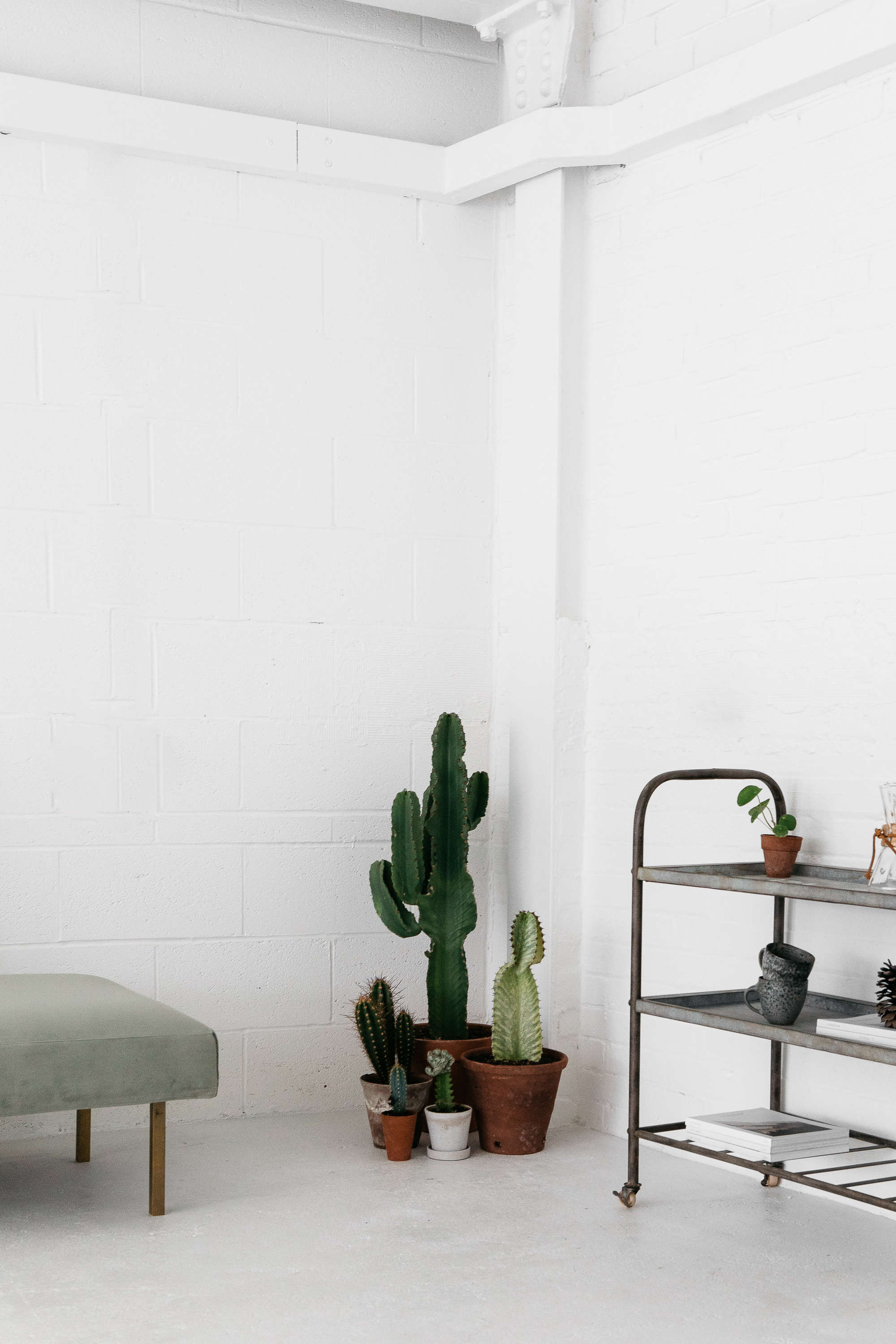 Above: Renée and Holly stuck to a materials palette of concrete, stainless steel, pale wood, and powerful pockets of greenery. The matte white on all the walls was supplied by their builder. 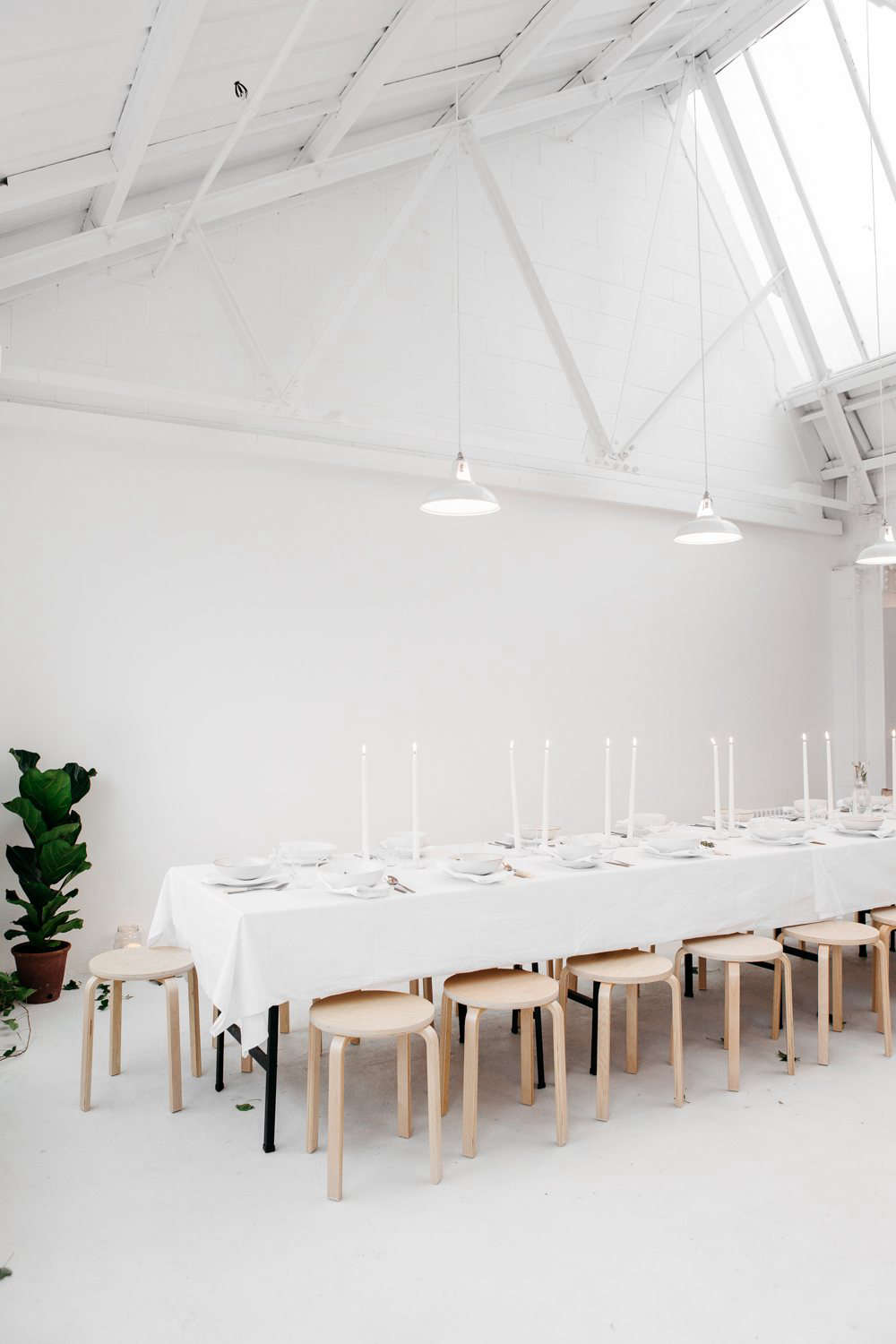 Above: The space is also the setting for supper clubs and other dinners. The Alvar Aalto look-alike Frosta stools are from Ikea—$14.99 each; see The Return of a Cult Stool—and were selected “to add warmth to the studio, but keep it very minimal.”
For more details, go to Rye London.

Go to Kitchen of the Week for more ideas, including other inventive designs that make use of Ikea basics: