The decor of Gracias Madre restaurant in West Hollywood mirrors its organic, vegan fare: inspired by Mexico, but an entirely Californian affair.

Interior designer Wendy Haworth, architect Victor Corona, and restaurant owner Lisa Bonbright collaborated on the space, located in a former antiques showroom that had been subdivided into small, dark rooms. They began demolition right away, revealing original brick walls and a dramatic bow truss ceiling overhead. When it came to the interiors, Haworth added Mexican-inflected decor guided by the do-good ethos of Gracias Madre: “sustainability, community, and reverence for Mother Earth.”

To Haworth, that meant a space that was bright and inviting, full of artisanal wares and handmade finishes. “We designed our own custom handwoven chairs and wrought iron light fixtures, and used original embroidered fabrics and carved wood items throughout,” she said. 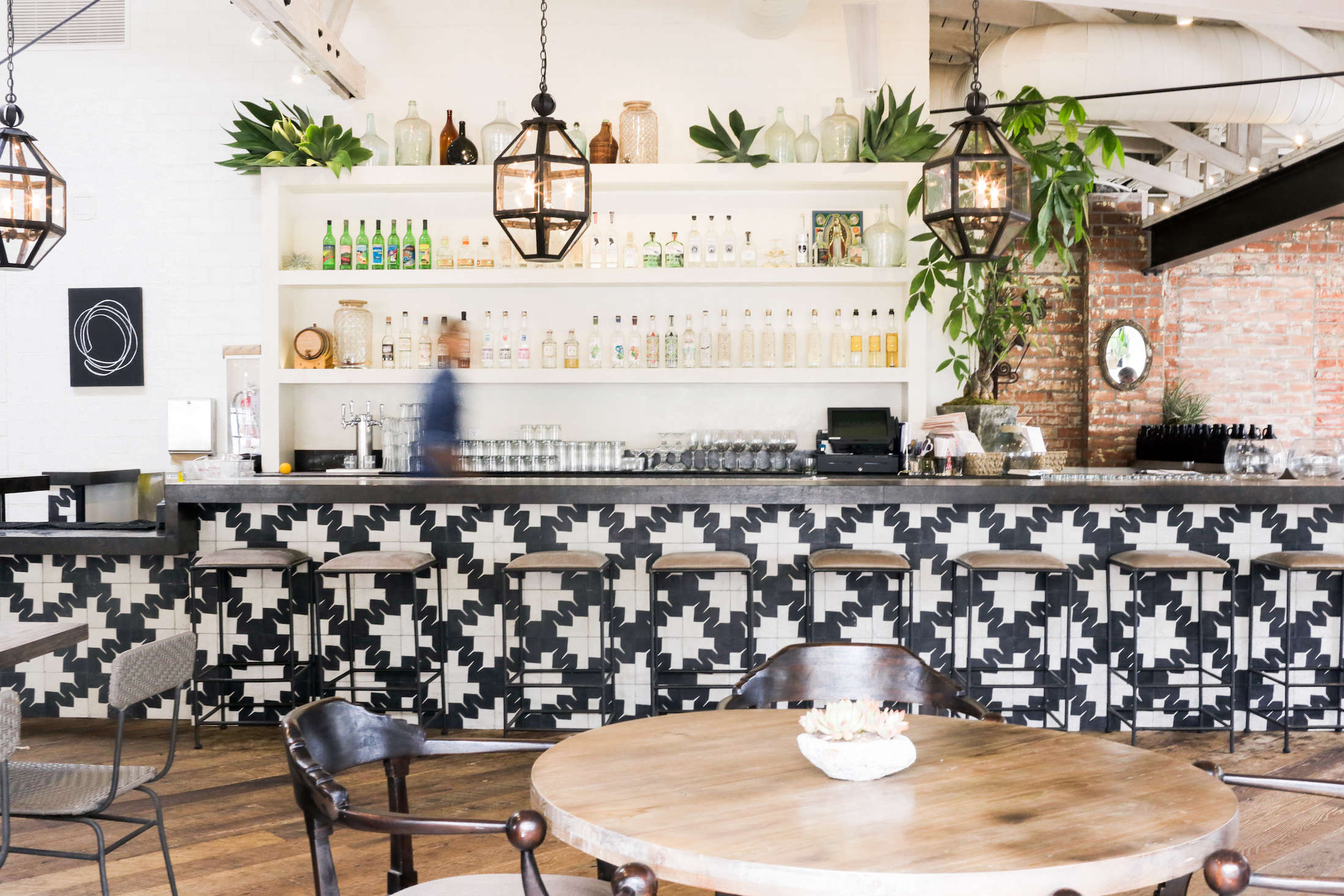 Above: The dramatic bar front is clad in black-and-white encaustic tile from Oaxaca, Mexico. Photograph by Kelly Brown. 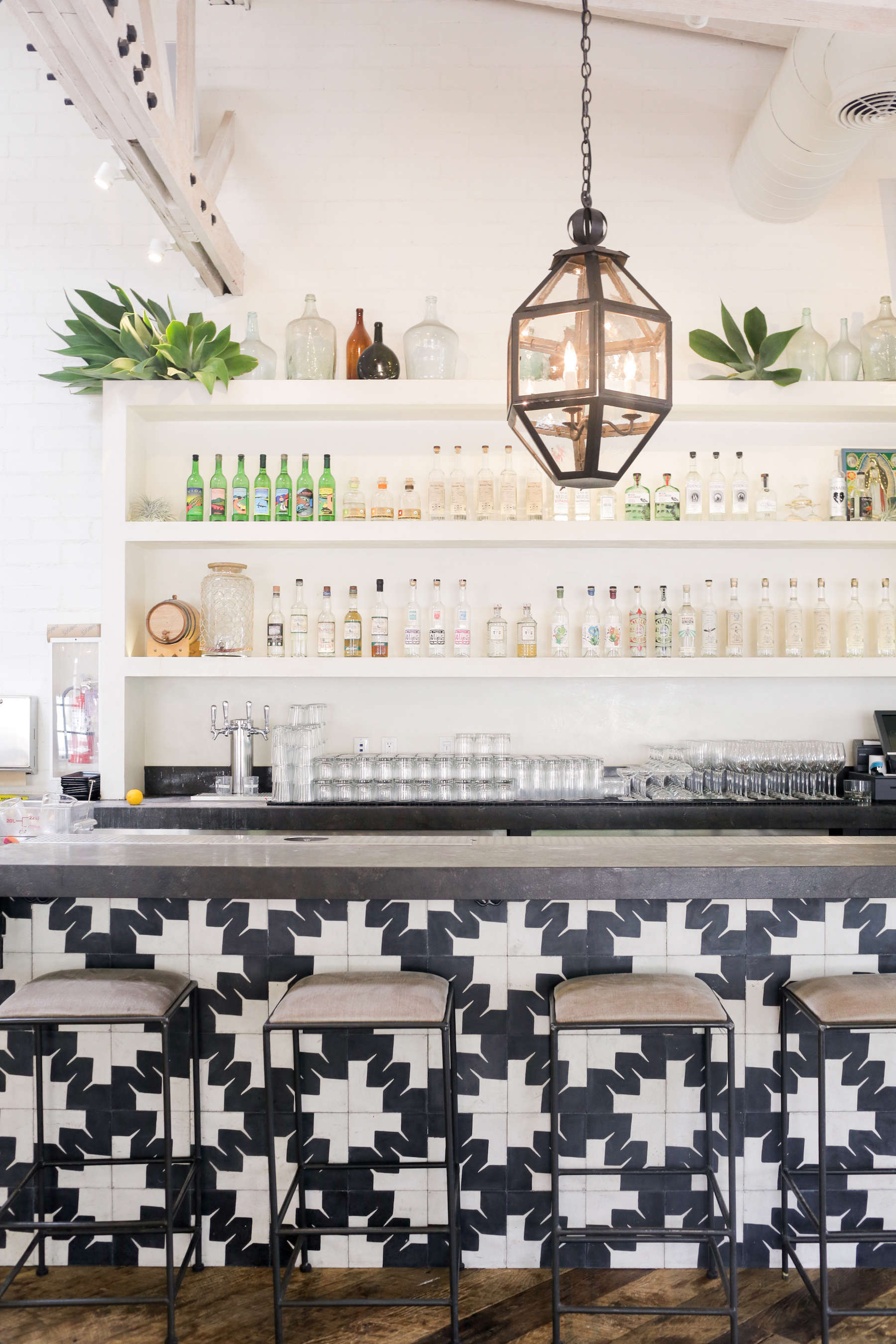 Above: The bar counter is “bleu chinois” limestone from Exquisite Surfaces, and the lantern pendants are custom replicas of an antique fixture. Photograph by Kelly Brown. 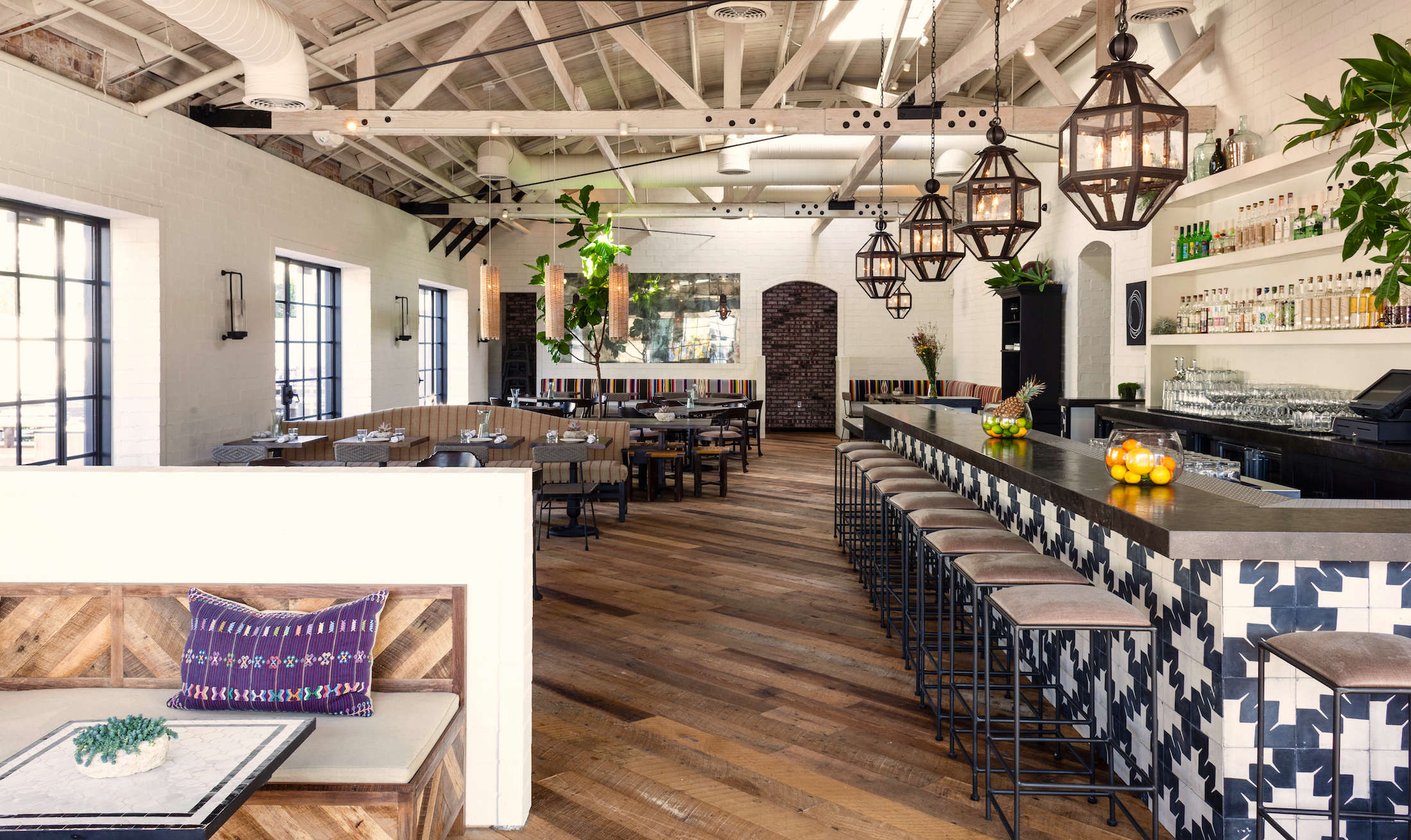 Above: The truss beams overhead are part of the original building and were whitewashed. Haworth sourced the reclaimed wood floors from Provenance in Philadelphia. Photograph by Nicole LaMotte. 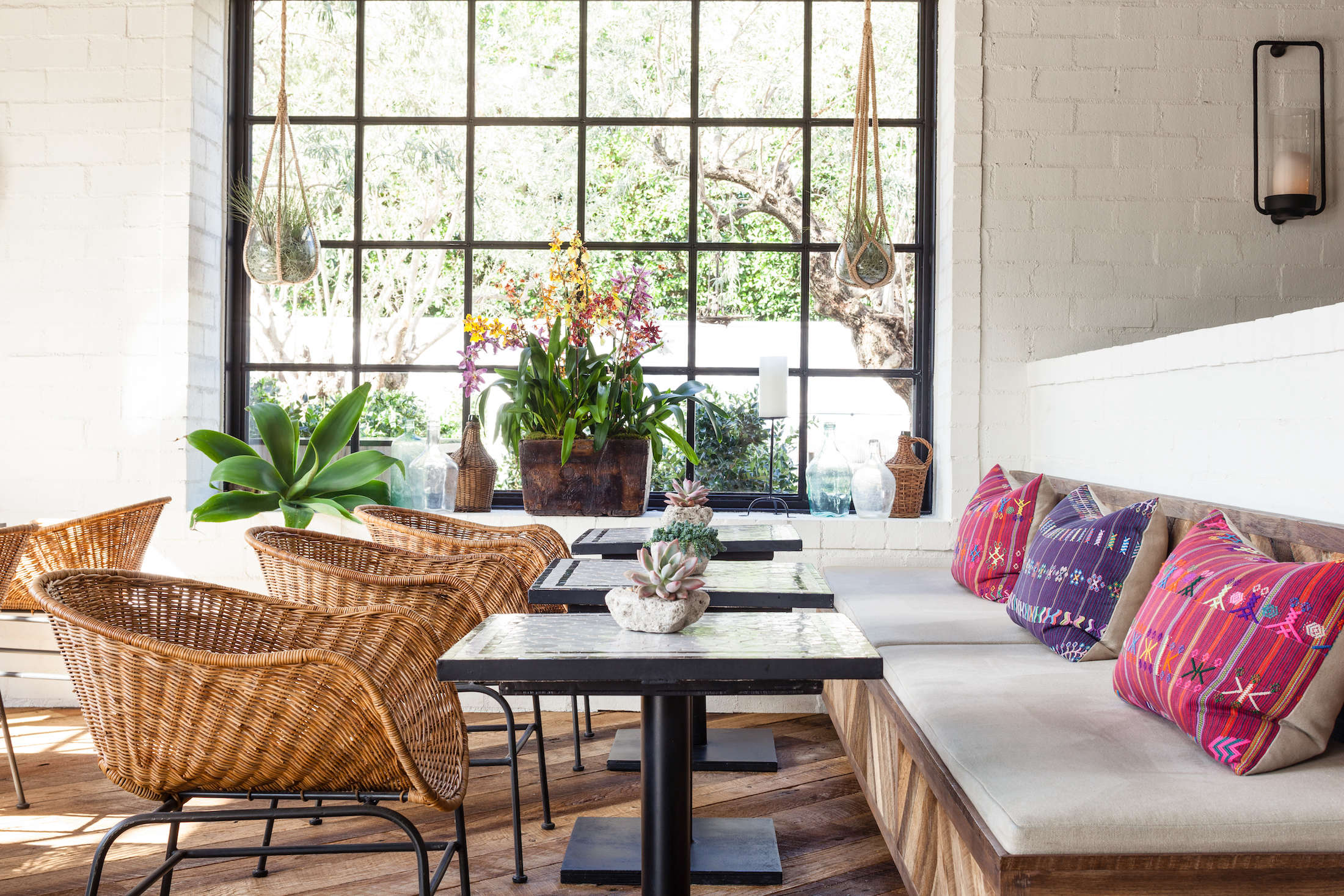 Above: The wicker armchairs were custom-made after a vintage design, and the bench cushions are covered in Guatemalan skirt fabric Haworth found at Dos Gallos antiques in LA. Photograph by Nicole LaMotte. 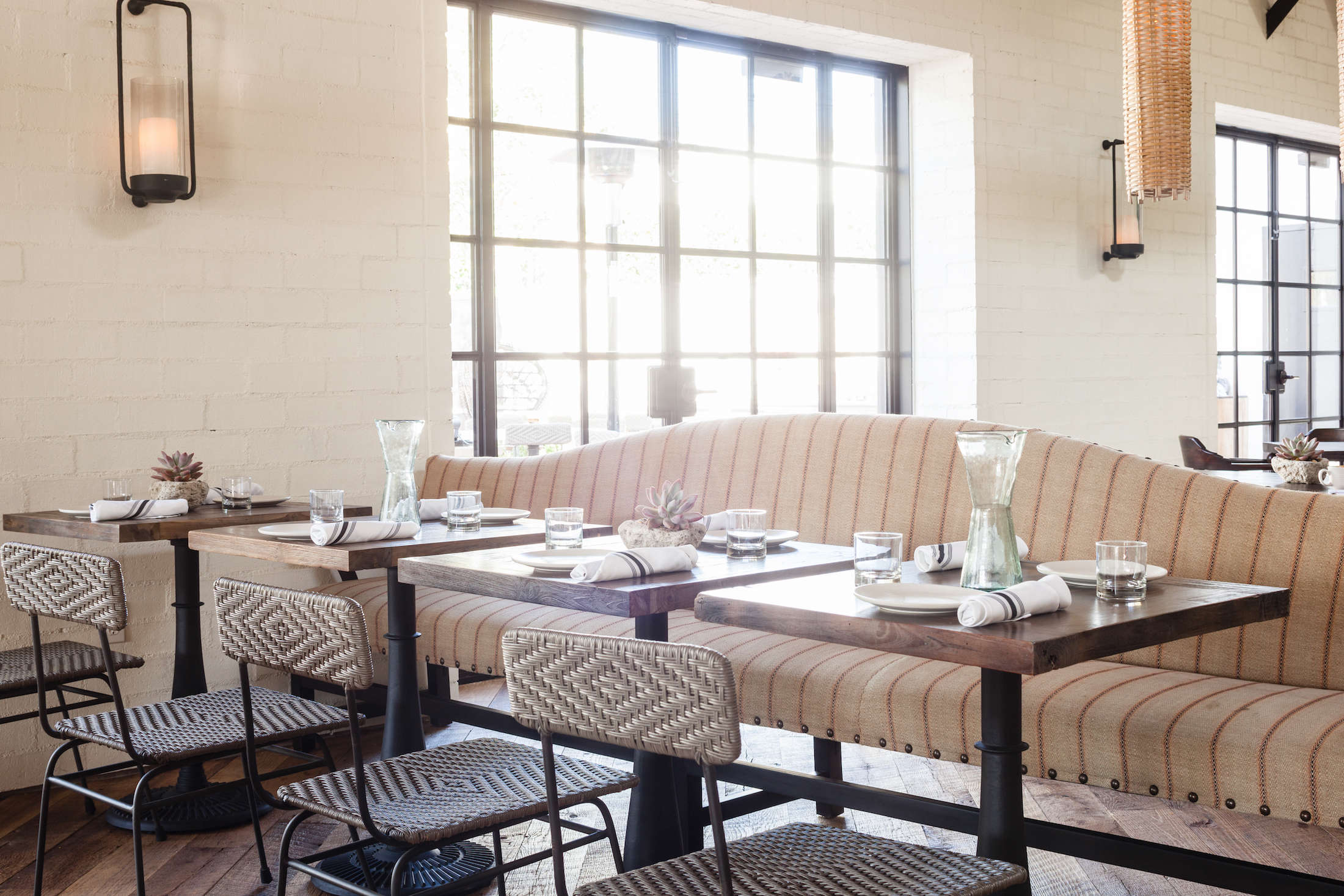 Above: A banquette in the center of the restaurant is upholstered in striped linen from Dessin Fournir. The painted paper cord chairs were designed to match a vintage rope chair of Haworth’s. The candle sconces on the wall are from Pottery Barn. Photograph by Nicole LaMotte. 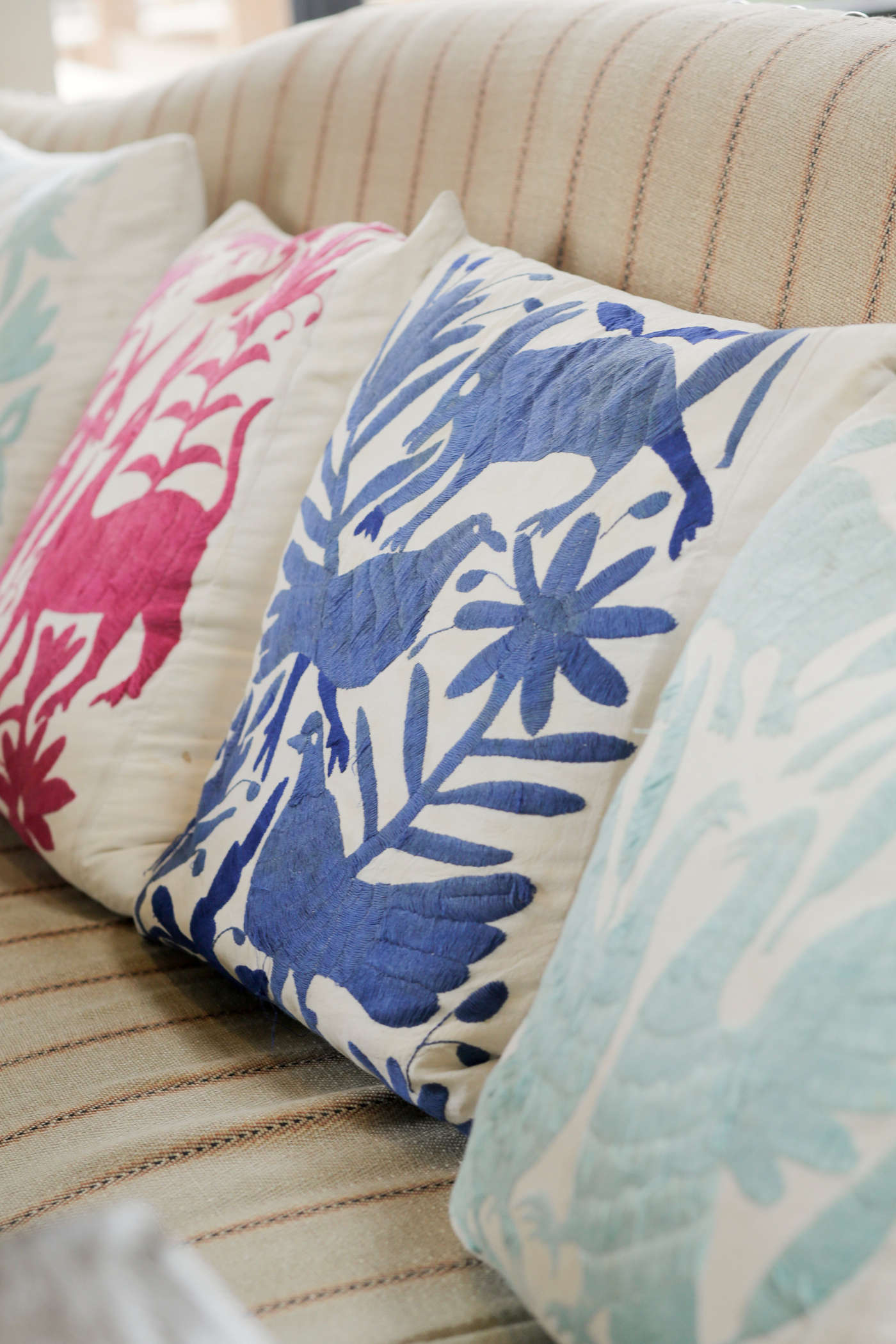 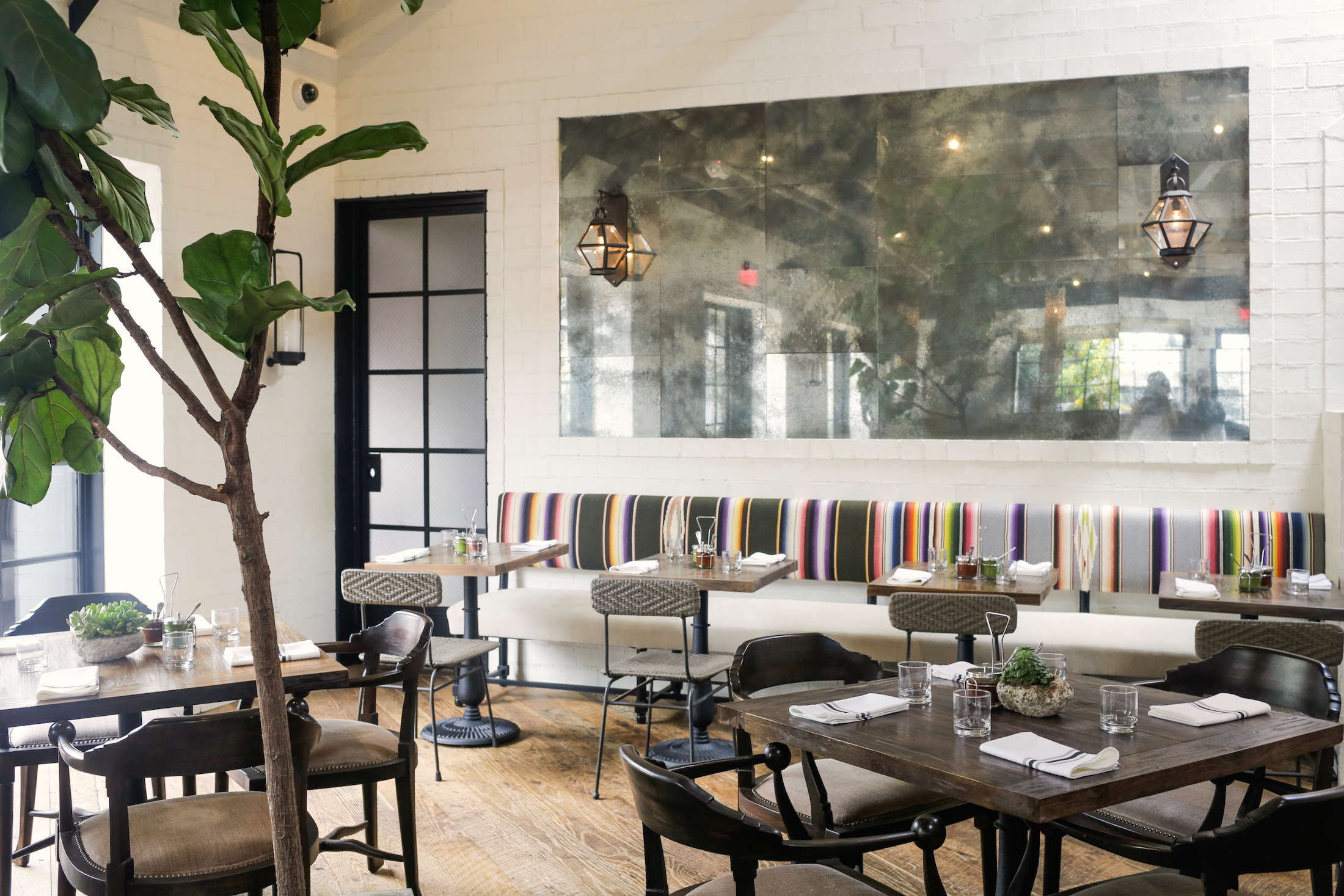 Above: The dining tables are made from reclaimed wood, and the glassware is made from recycled glass. Photograph by Kelly Brown. 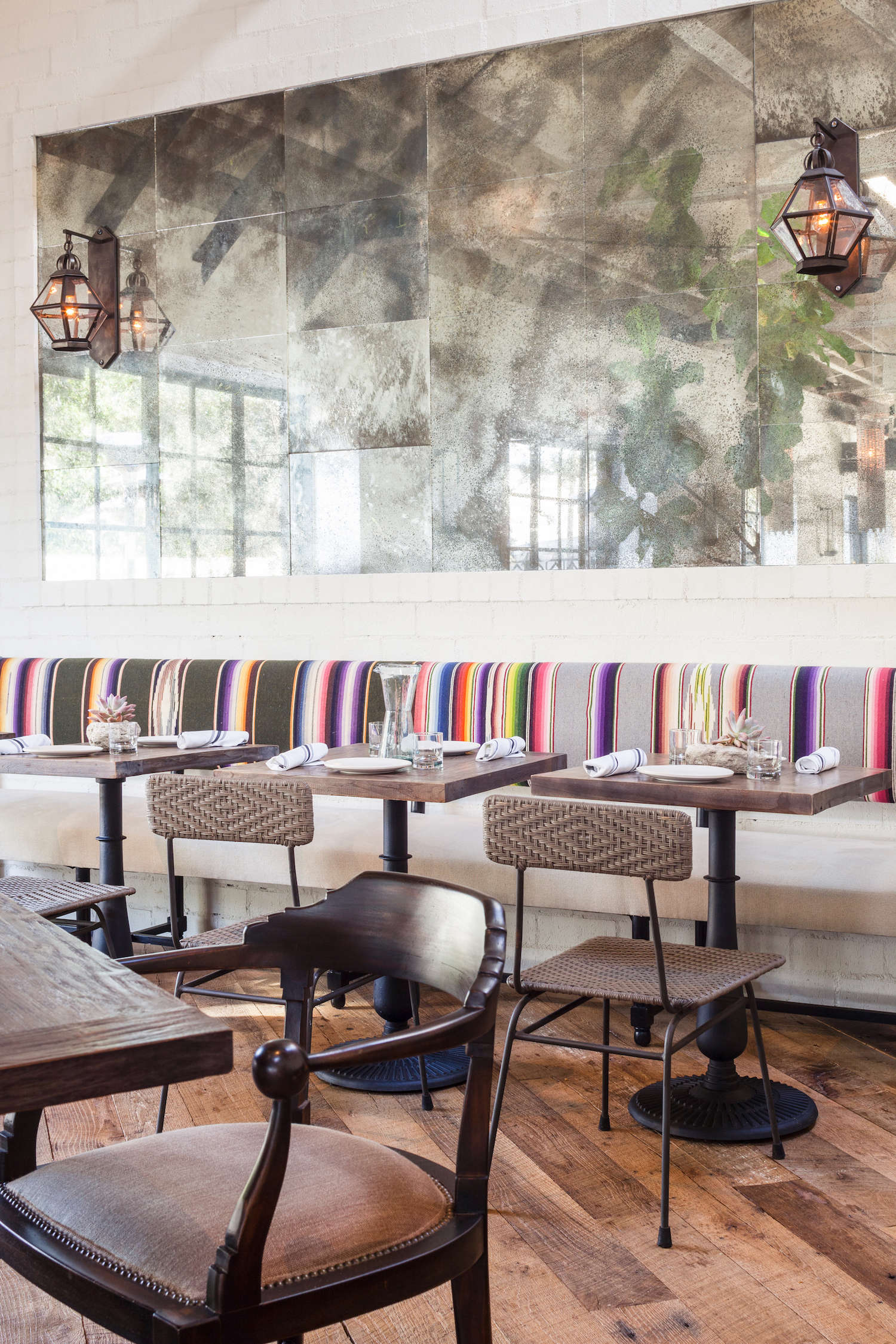 Above: The restaurant’s rear banquettes are upholstered in vintage serapes from the 1940s and 50s. “I was pretty specific on that time frame because I liked the finer lines and fabric quality of that era,” said Haworth. She had a wall’s worth of square mirrors antiqued by hand and installed inside a brick frame. Photograph by Nicole LaMotte. 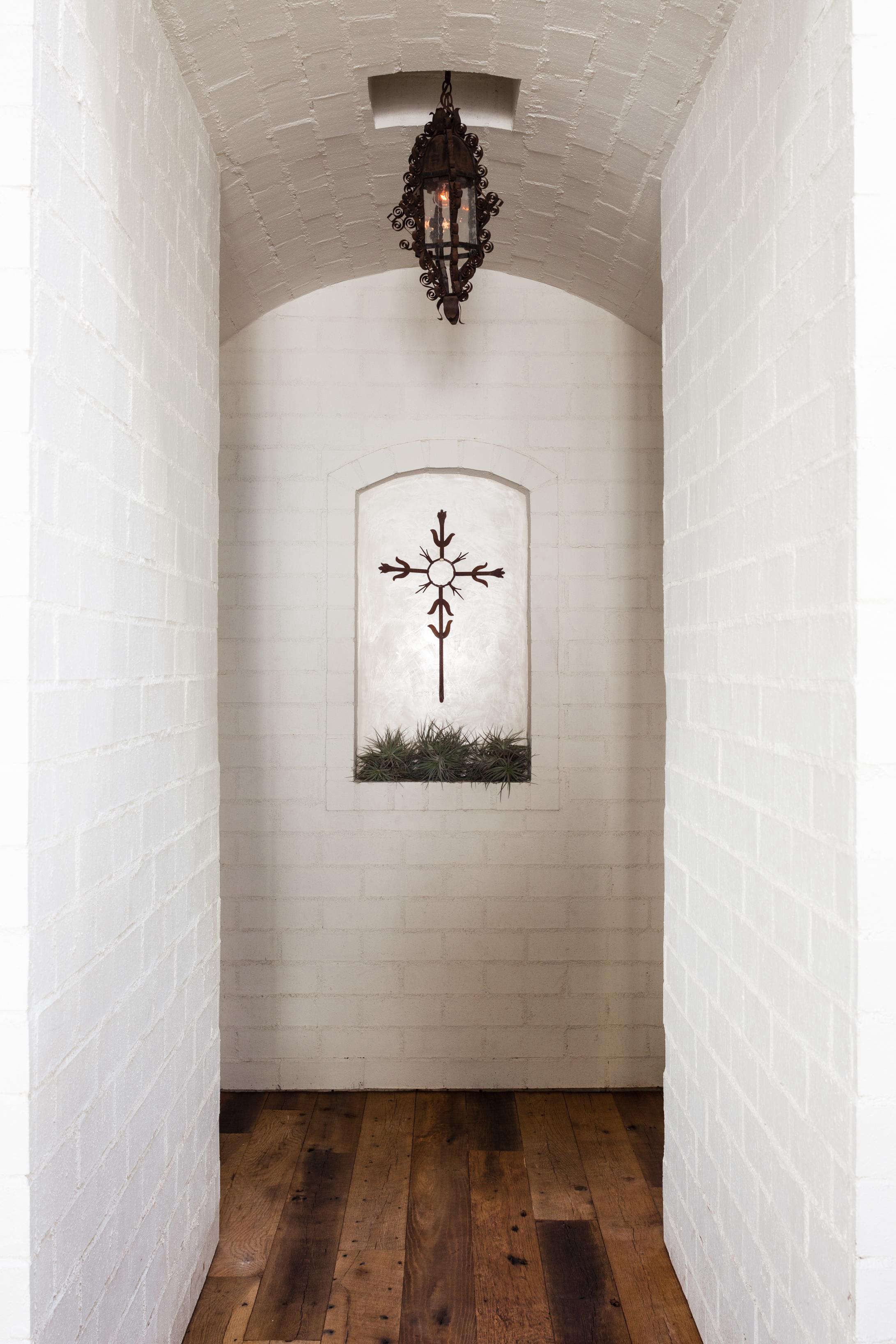 Above: The interiors are painted in Benjamin Moore Swiss Coffee. Some of the brick walls are original, and some walls are clad in five-eighth-inch brick veneer to match. Photograph by Nicole LaMotte. 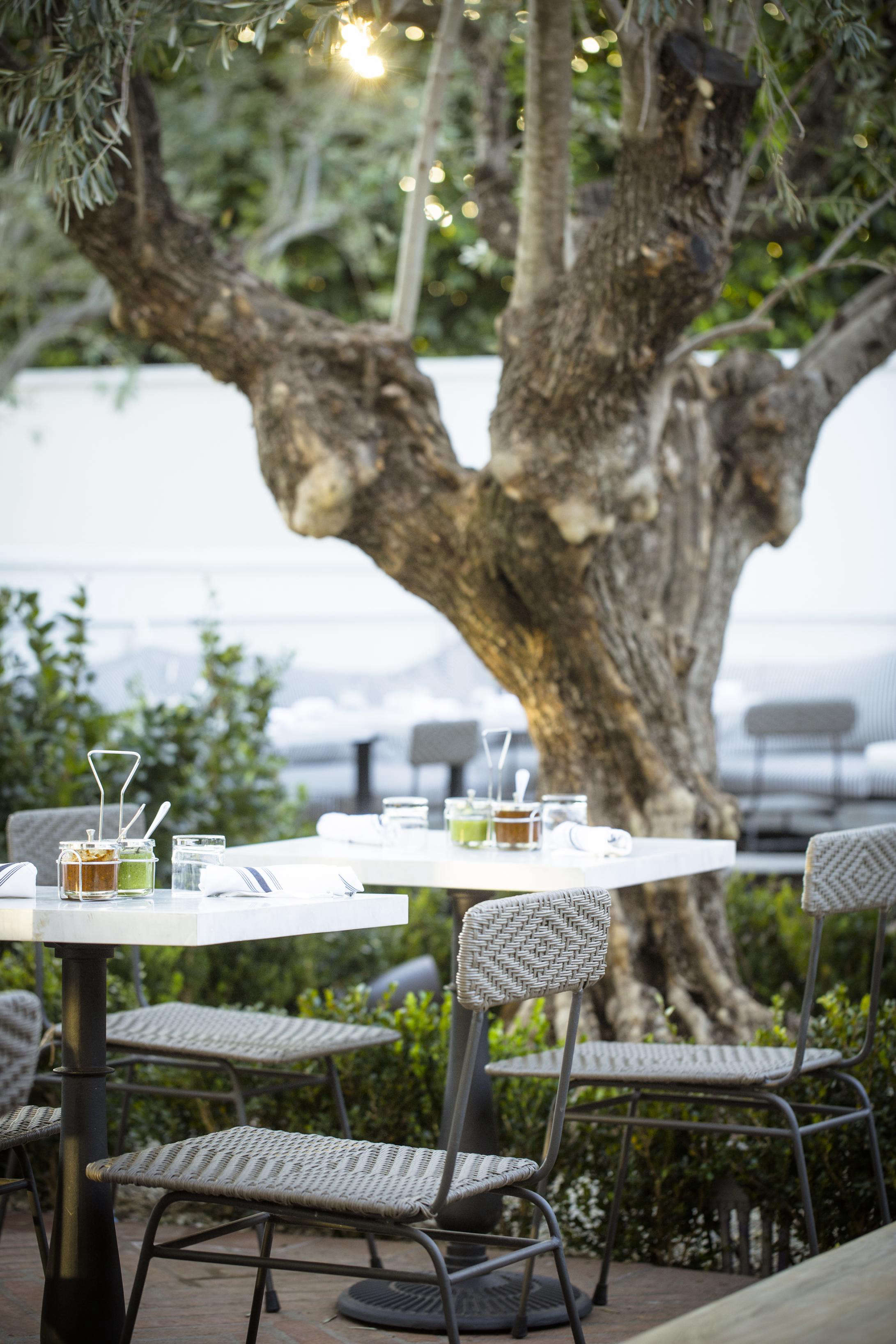 Above: Landscape designer Scott Schrader transformed a former parking lot into one of the chicest patios in West Hollywood. He planted two large olive trees and anchored the patio in a herringbone pattern of Mexican brick. Photograph by Eric Wolfinger. 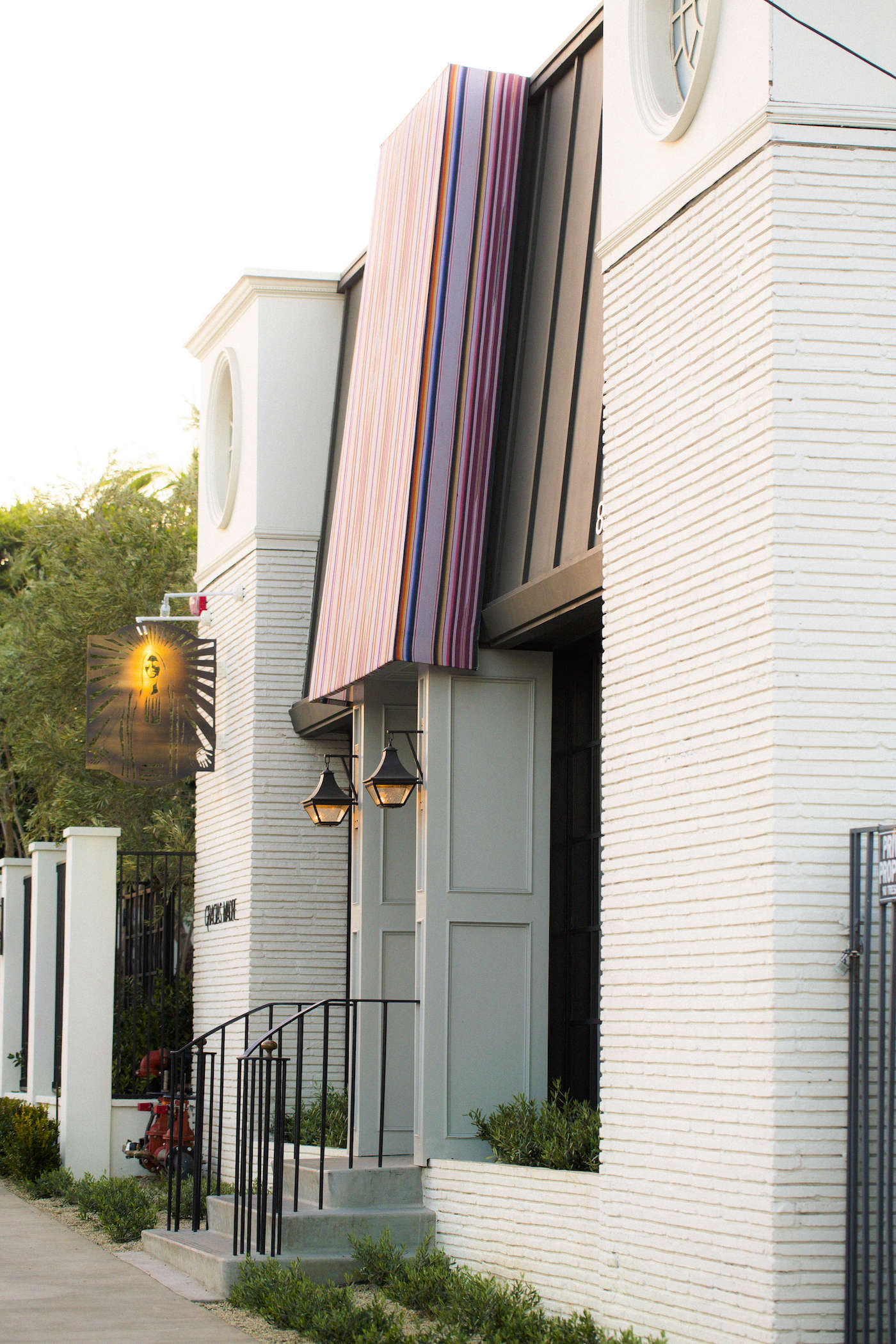 Above: For the awning, Haworth had one of her vintage serape fabrics scanned and printed on outdoor fabric. Photograph by Eric Wolfinger.

Kitchen of the Week: An Artful Ikea Hack Kitchen by Two London Foodies