Design firm Roman and Williams have left their mark on lodgings all over New York, including the inventive and buzzing Ace and Standard hotels. The High Line Hotel, which officially opened last week, is one of the most imposing and also the quietest of the duo’s designs (most nights, the small lobby is quiet enough for hymn singing). Located in Chelsea in a landmark Gothic building that spans the block on 10th Avenue between 20th and 21st streets, the 60-room hotel occupies what had been until recently a student dormitory belonging to the General Theological Seminary, which still operates in a section of the structure Roman and Williams preserved the spirit of the place while sprucing up the accommodations. Go to the High Line Hotel for more information.

Above: The immense Gothic structure was built for the General Theological Seminary in 1895 (it was formerly an apple orchard on an estate that belonged to Clement Clarke Moore, who wrote ‘Twas the Night Before Christmas–and willed tracts of his property to the Episcopal Church.) This photo was taken from the High Line, the elevated rail bed turned urban park, across the street from the hotel. Twenty-two of the 60 guest rooms have views of the High Line. 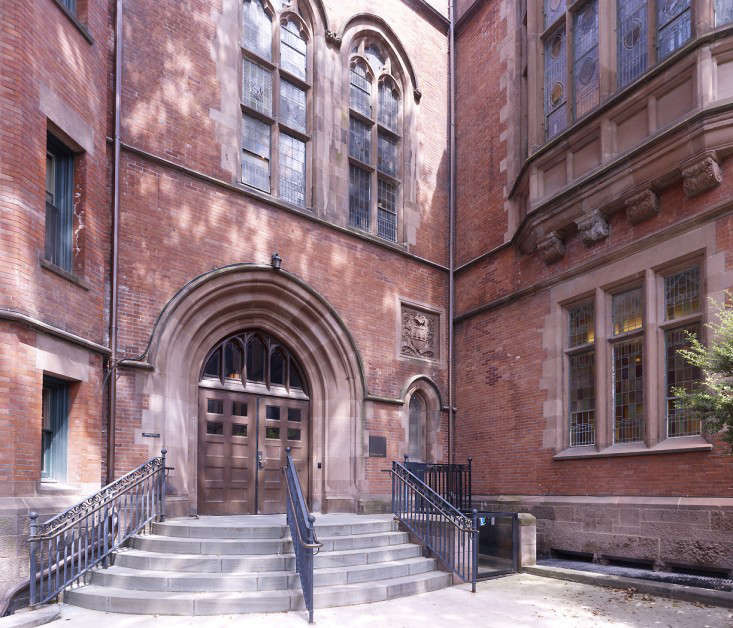 Above: The red brick landmark retains its soaring stained-glass windows. 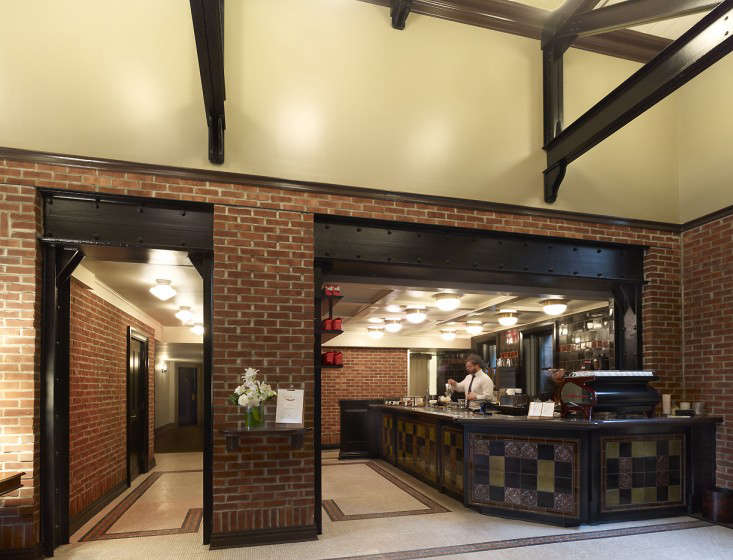 Above: The modest lobby has a tiled floor and zinc coffee bar–New York’s only outpost of famed Intelligentsia Coffee of Chicago. Beer, wine, and Champagne are also served (if you arrive before 9 pm), and there are a few chairs for lounging, but it’s a low-key spot: guests self check-in via iPad and the management bills the setup as a guest house. There’s no restaurant or room service on the premises, and a simple courtyard bar is in the planning stage. 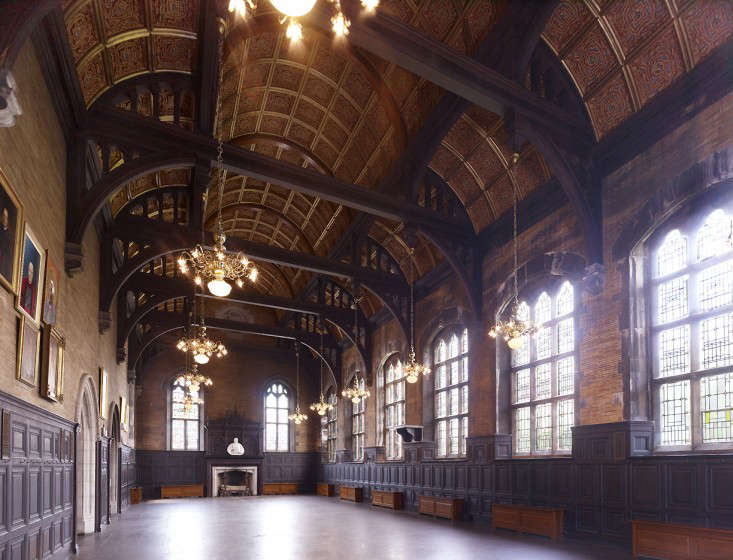 Above: The highlight of the High Line Hotel: the original refectory, Hoffman Hall, a Hogwarts’ Dining Hall-like space that spans 3,300 square feet and holds 400 people. It’s used for events, including last week’s hotel opening party, weddings, and fashion shows–and also still serves as the seminary’s weekday lunch room (during which the football-field-size space is filled with round tables for five). 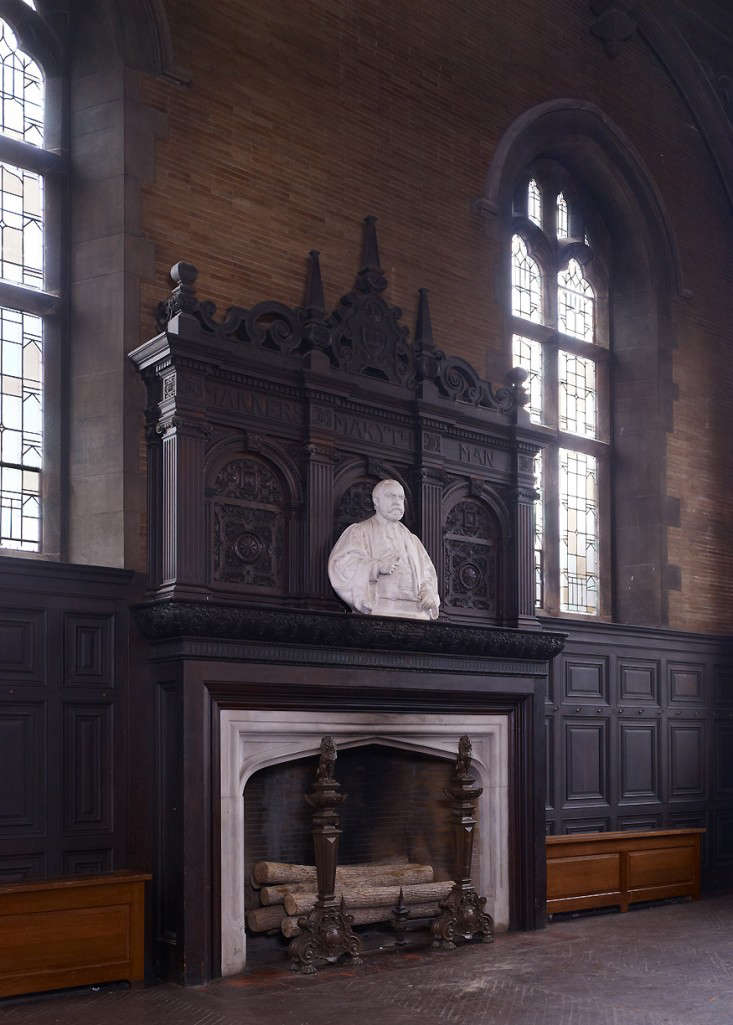 Above: Hoffman Hall’s central fireplace is carved with the exhortation “Manners Makyth Man.” 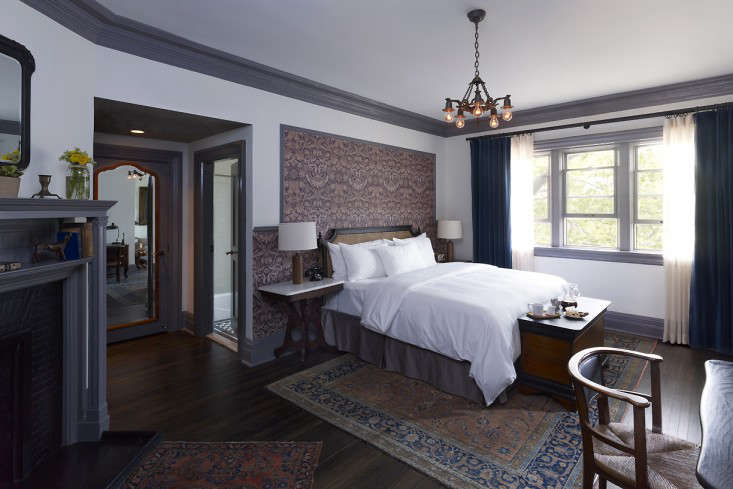 Above: The 60 guest rooms range in size from 275 square feet to 500 square feet (shown here). They all have wooden floors with worn Persian and Turkish antique carpets and lamp-topped tables–a nod to dorm style of yore–and many still have their original mantels. The scene-setting custom damask wallpaper behind the bed is a reminder that Roman and Williams began their careers as set designers. 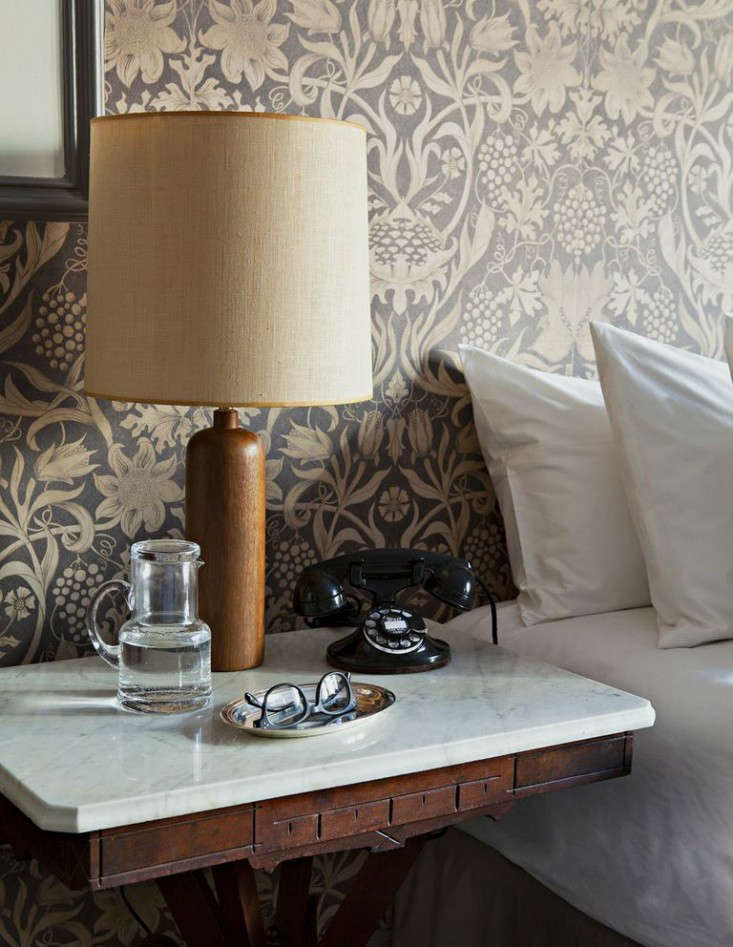 Above: Another genius Roman and Williams touch: 1928 Western Electric 202 rotary-dial phones (with updated workings) on bedside tables throughout the hotel. 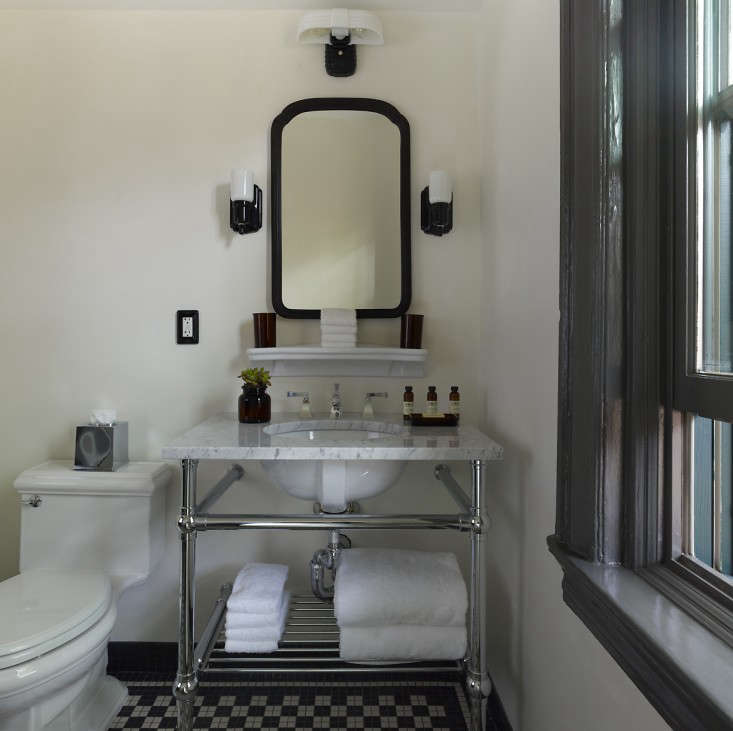 Above: The bathrooms have black-and-white tiled floors and Kohler marble-topped sink stands. We have a hunch the vintage-style lights came from Rejuvenation: see the Rufus two-light wall bracket. We like the way the window frames in the rooms, as well as the mantels, are painted in Stone, a warm gray from Benjamin Moore. 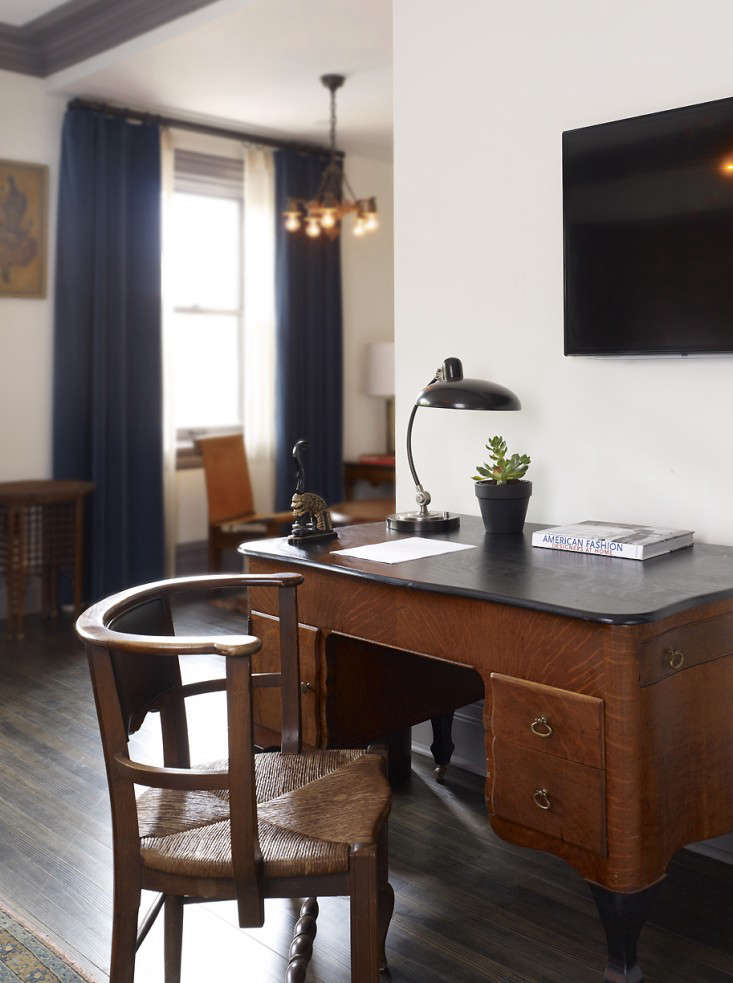 Above: An antique desk and reading lamp in a suite. Vintage furniture was sourced from an estate sale on the Bowery, among other places. Here and there, the 21st century tiptoes into the rooms: note the barely noticeable television screen on the wall. 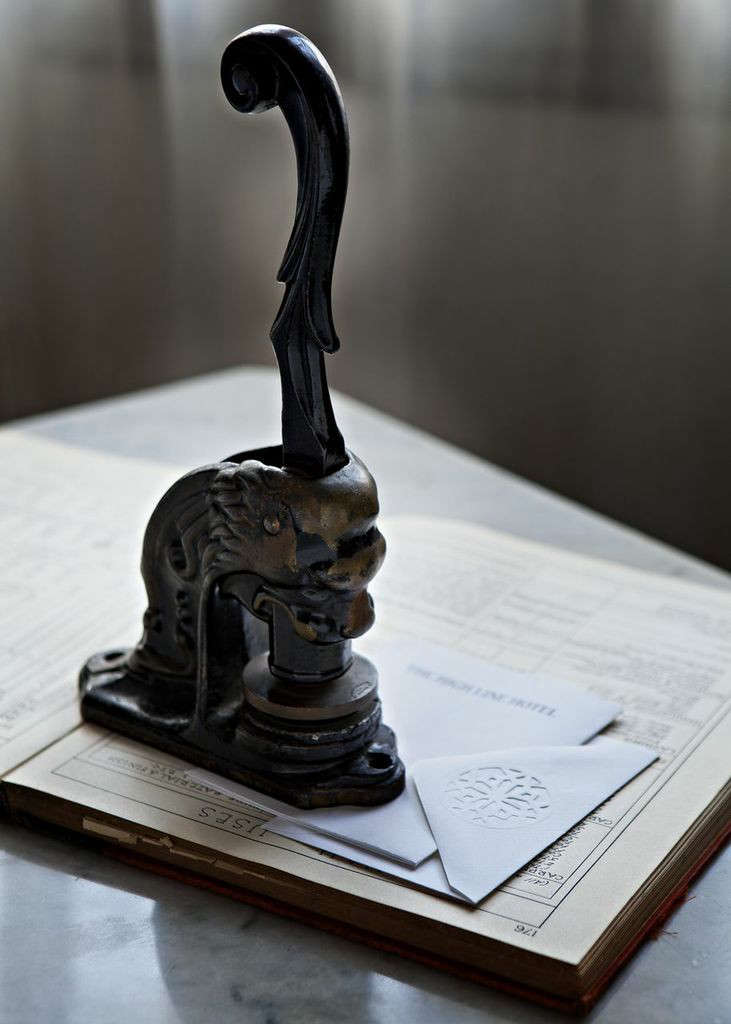 Above: Roman and Williams planted every desk with an antique cast-iron embosser for embellishing hotel stationery with a geometric circular design, a pattern taken from the building. 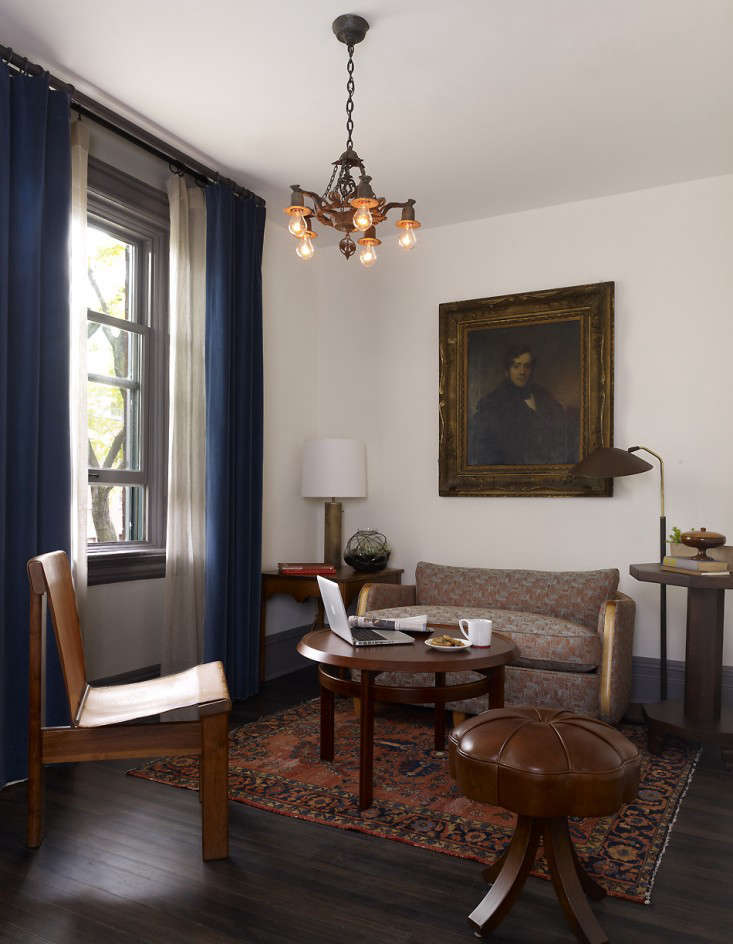 Above: Each of the four suites has a sitting area furnished as if an aesthete priest from a bygone era were in residence. 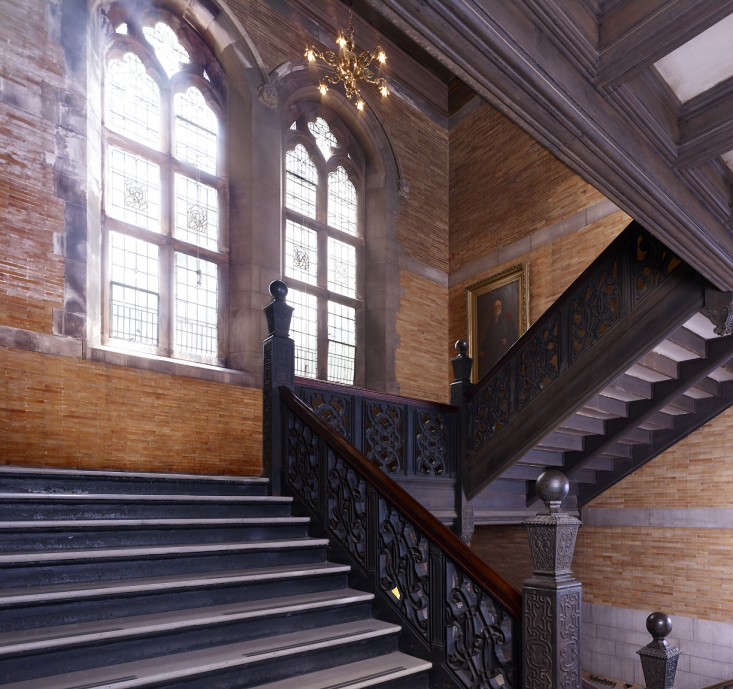 For more Manhattan highlights, check out our New York City Guide. And have you heard? On November 21-23, we’re hosting our first Remodelista Market in New York–hope to see you there.

The Patchwork Quilt Gets a Modern Makeover

Steal This Look: A Sunshine Bath in a London Townhouse