We recently caught up with Waterworks founder Barbara Sallick over breakfast at SF social club The Battery to take a closer look at her new book, The Perfect Bath. It’s packed with advice on floor plans, fixtures, color palettes, and more; if you have a bathroom redesign in your future, Sallick’s decades’ worth of advice will steer you in the right direction.

Here’s what the grande dame of bathroom design has to say:

Photography courtesy of Rizzoli New York, from The Perfect Bath by Barbara Sallick. 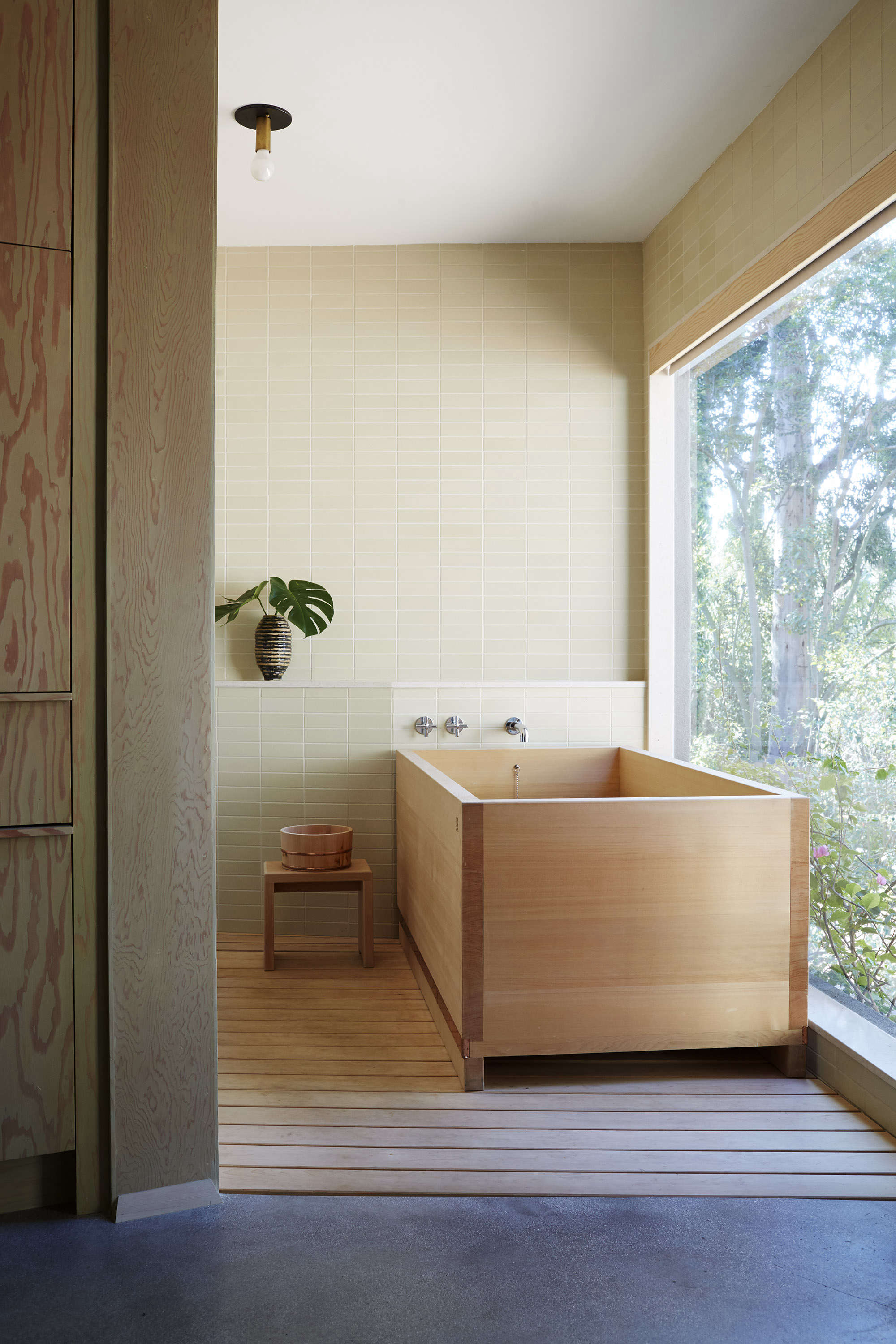 Above: Commune Design founder Pamela Shamshiri’s own Los Angeles bathroom was inspired by a bathing experience in Kyoto.

Remodelista: How has bathroom design changed over the years?
Barbara Sallick: I’ve been doing this for nearly 40 years and when we started, the bath was just a funky space in the house with a tub and toilet—not a space on which anyone building a new house would spend any time or money. But people started traveling more and taking inspiration from bathrooms in Europe, and they’d come back and want to recreate the look at home. So we became evangelists for better bathrooms, and began educating plumbers and architects on what was even possible.

And of course, tastes change. In the 1970s, faucets with acrylic handles were popular, as was an avocado and gold color scheme. Today, there’s no question we are in the era of the white bath, but people are now softening the look with art and more natural textures. 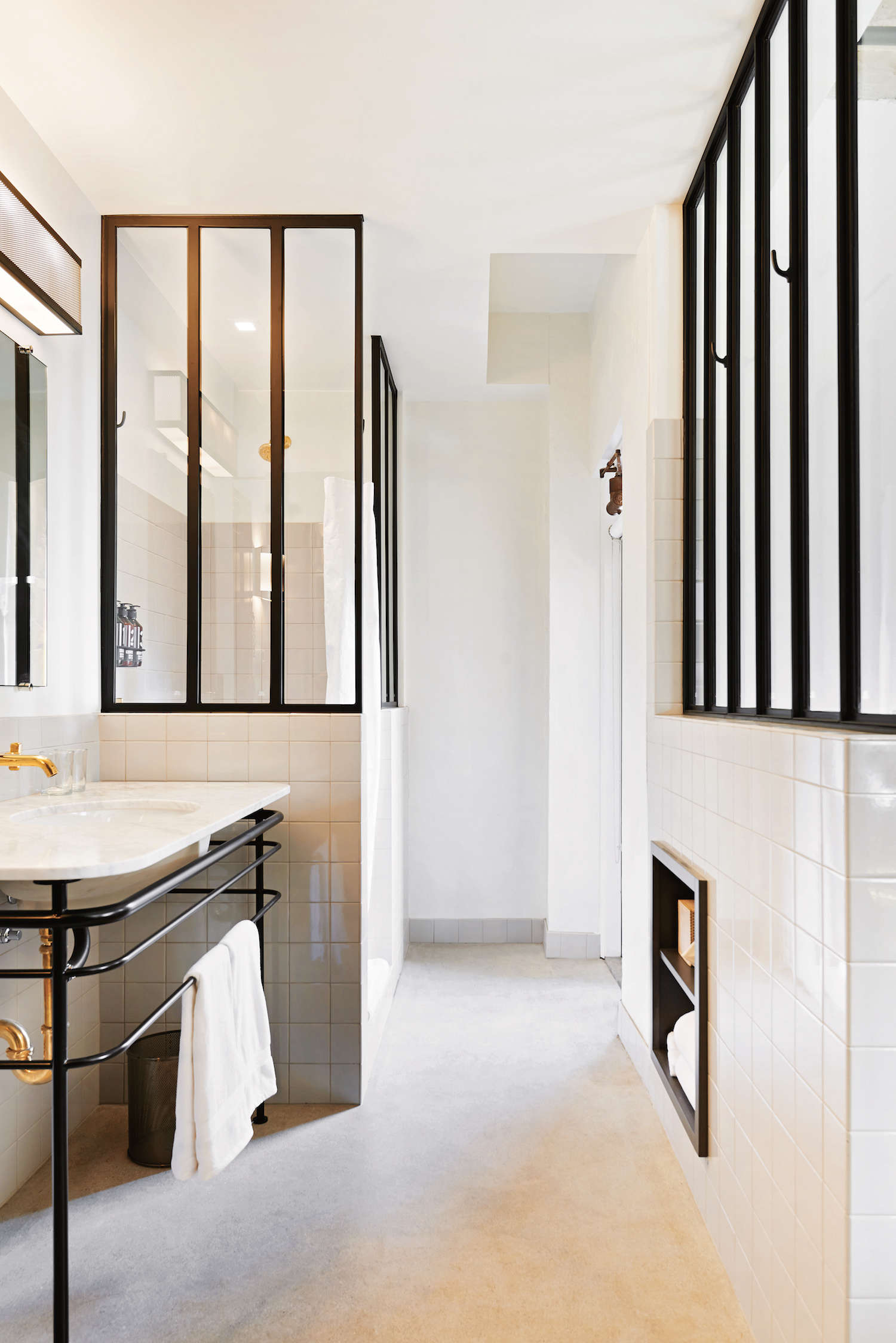 Above: Another design from Commune, this bath at the Ace Hotel in downtown LA has black steel interior windows that reference its prewar neighborhood.

RM: Where should you start when you set out to design a new bath?
BS: I know it’s hard to do this, but first—know your own look. I suggest people examine their closets to learn something about their preferred palette. Ask yourself, “Do I like contrast? Or do I like all white or gray?”

Next, start collecting images of spaces that inspire you from magazines and blogs. Take a break, then go back and edit your choices, assessing why you pulled each image in the first place. You’ll start to notice some themes among what you’ve chosen. The whole goal here is to gather information, then edit down so that you can state with clarity what you’re after. 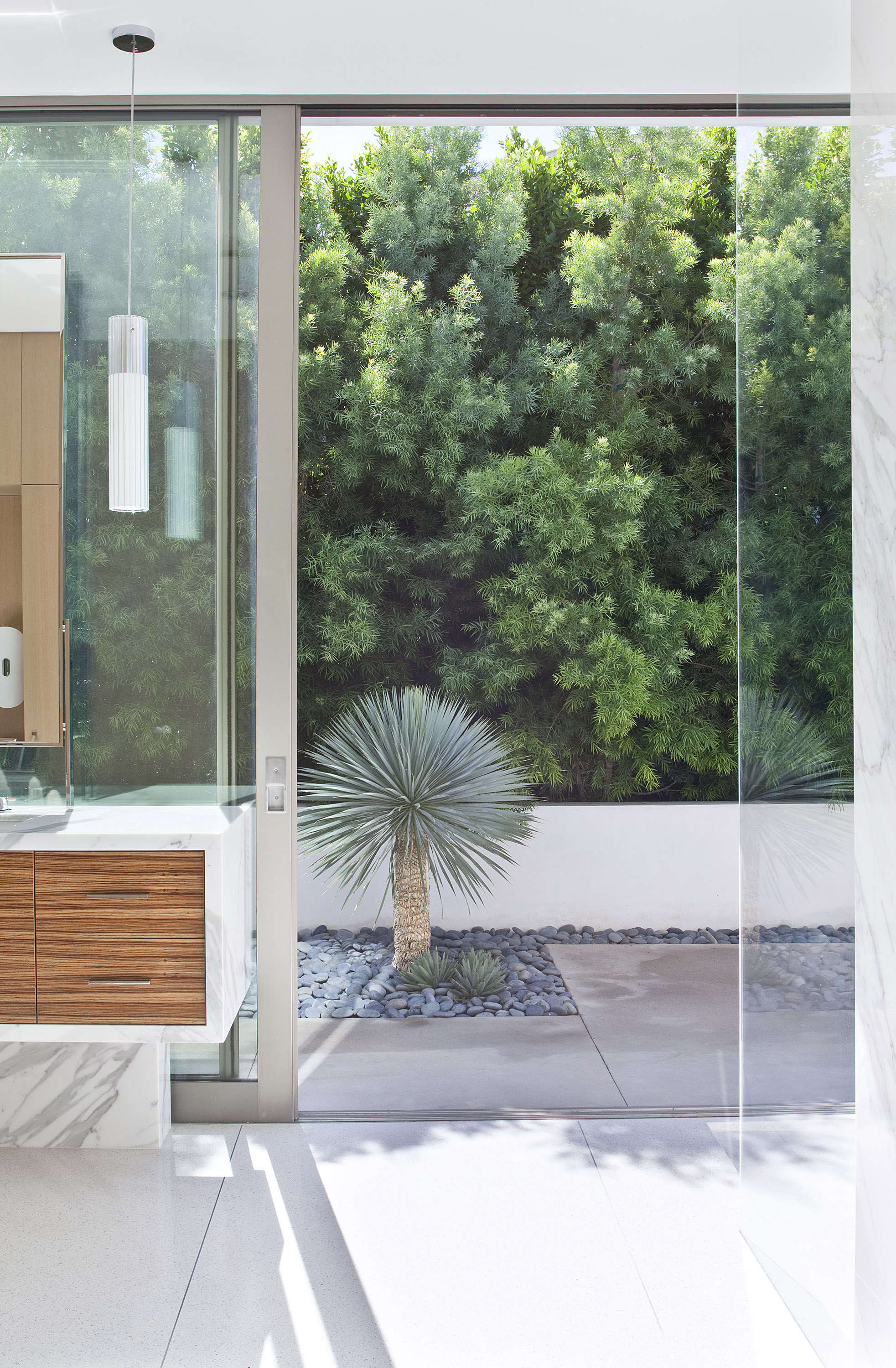 Above: A California bath from the “Context and Adjacencies” chapter, in which Barbara recommends that a bathroom should embrace the architectural style of the home and take advantage of the physical spaces adjacent to it, like a garden.

RM: How often do you redesign your own bath?
BS: Almost never. I have two full and two half-baths in my Connecticut house. I designed my own master bath 22 years ago, and I still love it—I wouldn’t do anything differently. I used three-by-six-inch white tile and a 1928 American Standard pedestal sink. I did just update a tiny powder bath by painting it in Plummett from Farrow & Ball. The room is a funky shape—organized around a chimney—and still has its original black toilet from 1968. The floor is mini 3/4-inch-wide brick. It’s tiny, but it works well as a guest bath. 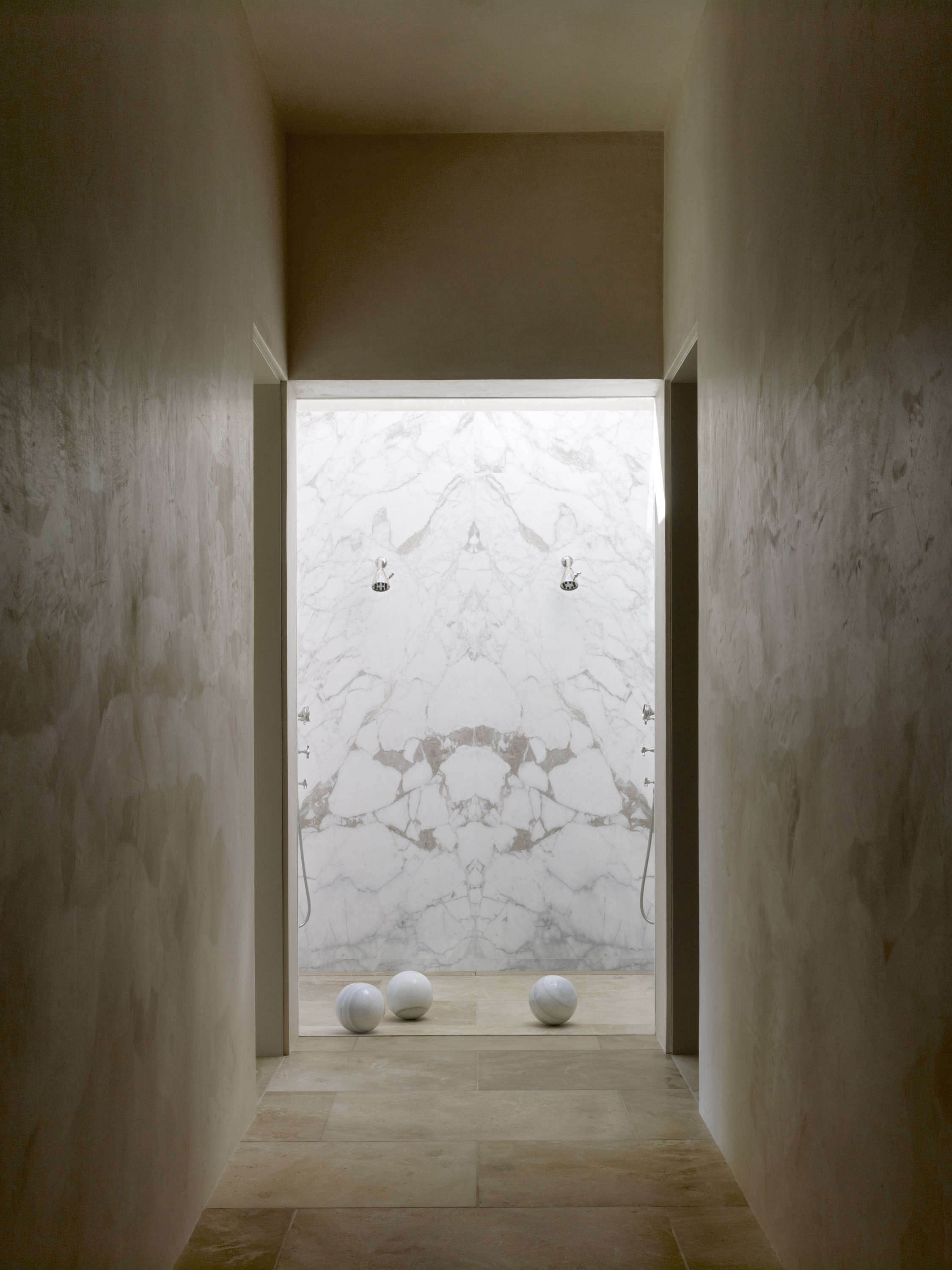 Above: A minimalist double shower in white marble at the end of a stone hallway.

RM: What bath fixtures do you steer people toward? Is it mandatory to have a bathtub?
BS: Not at all. If you’re designing the master bath and you have the room, a bathtub can be a beautiful, sculptural thing. But if you never take baths, it’s not needed.

Double sinks are nice for two people, but you need a pretty long wall space—say, five and a half feet. If I had the room in my master bath, I would have added two sinks. Interestingly, bidets are still not catching on in the US; some people have taken inspiration from Europe and added them into their American homes, but you need a lot of space to fit both a toilet and a bidet—a minimum of five feet—so that requires a big bathroom. 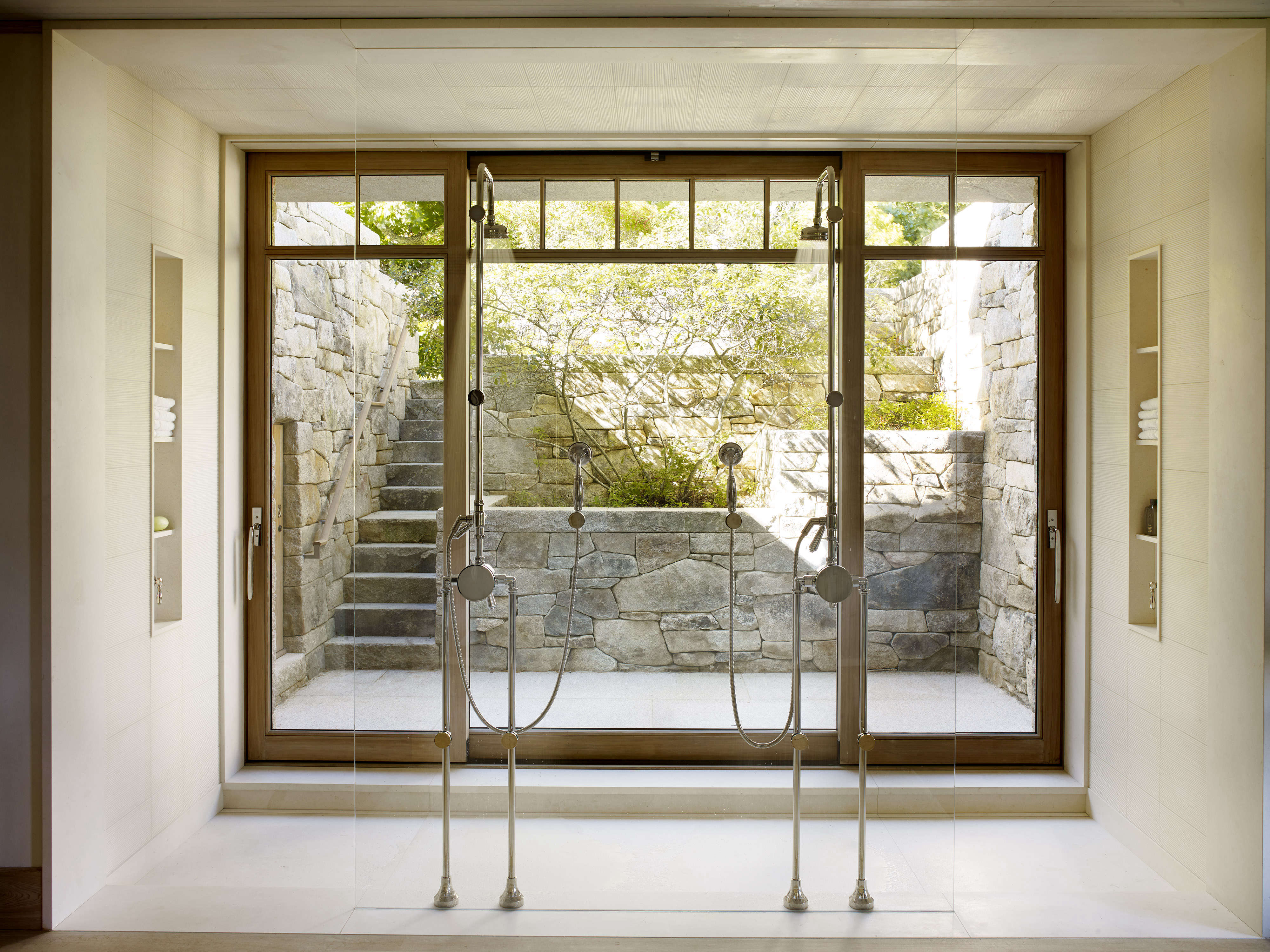 Above: An indoor/outdoor shower linked to a stone garden via full-height windows and doors.

RM: What kind of tile do you recommend?
BS: I usually suggest a stone or solid color tile. Using patterned tile is a big step for a homeowner. You can’t be timid; it only works when you use it with complete confidence. If you hesitate and use it only in a small area, it looks like you’re afraid of it.

RM: Any recommendations for someone trying to make a tiny bath work?
BS: Having a small bathroom forces you to edit, so you’ll need to toss out your extra lipstick and spare bottles of anything. I would definitely have more stuff if I had a place to put it, but my bath is small; if it doesn’t fit, I don’t want it. 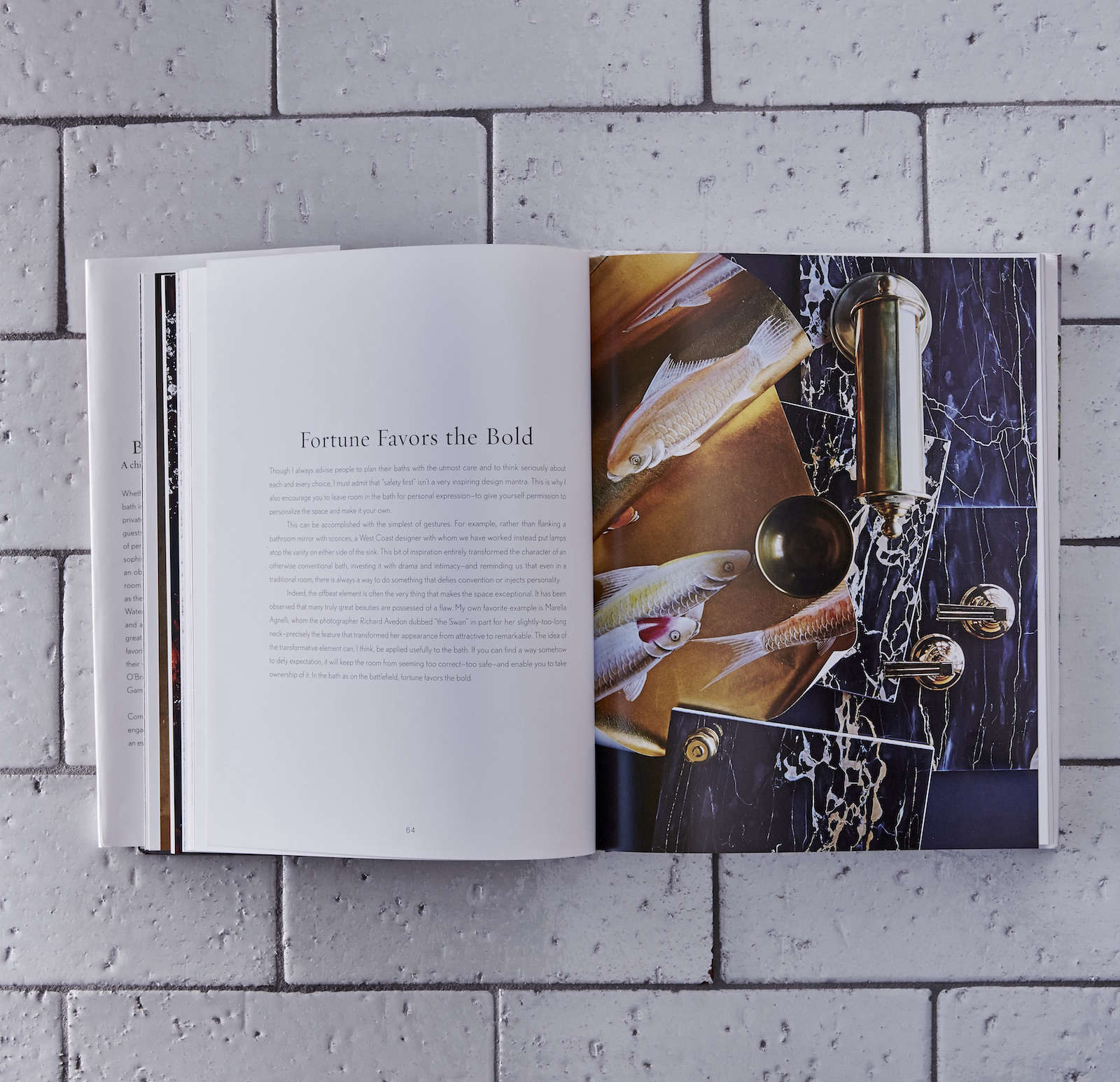 RM: Where should you spend in the bath, and where’s a place you can save some money?
BS: Always remember that you will be using the bath every day. It’s not an occasional room, so never try to save money on the quality of the fittings. Buy the best you can afford; they are a lifetime investment. Should anything go wrong, you can always count on the manufacturer to help remedy the problem. If you have a large bath, spend on an architect or a designer who knows how to plan a space. You can end up with a mess if the space is not planned well.

You can save money on wall tile—just keep it simple. I used inexpensive classic white three-by-six-inch tiles in my bathroom, for instance, and I never get sick of it. 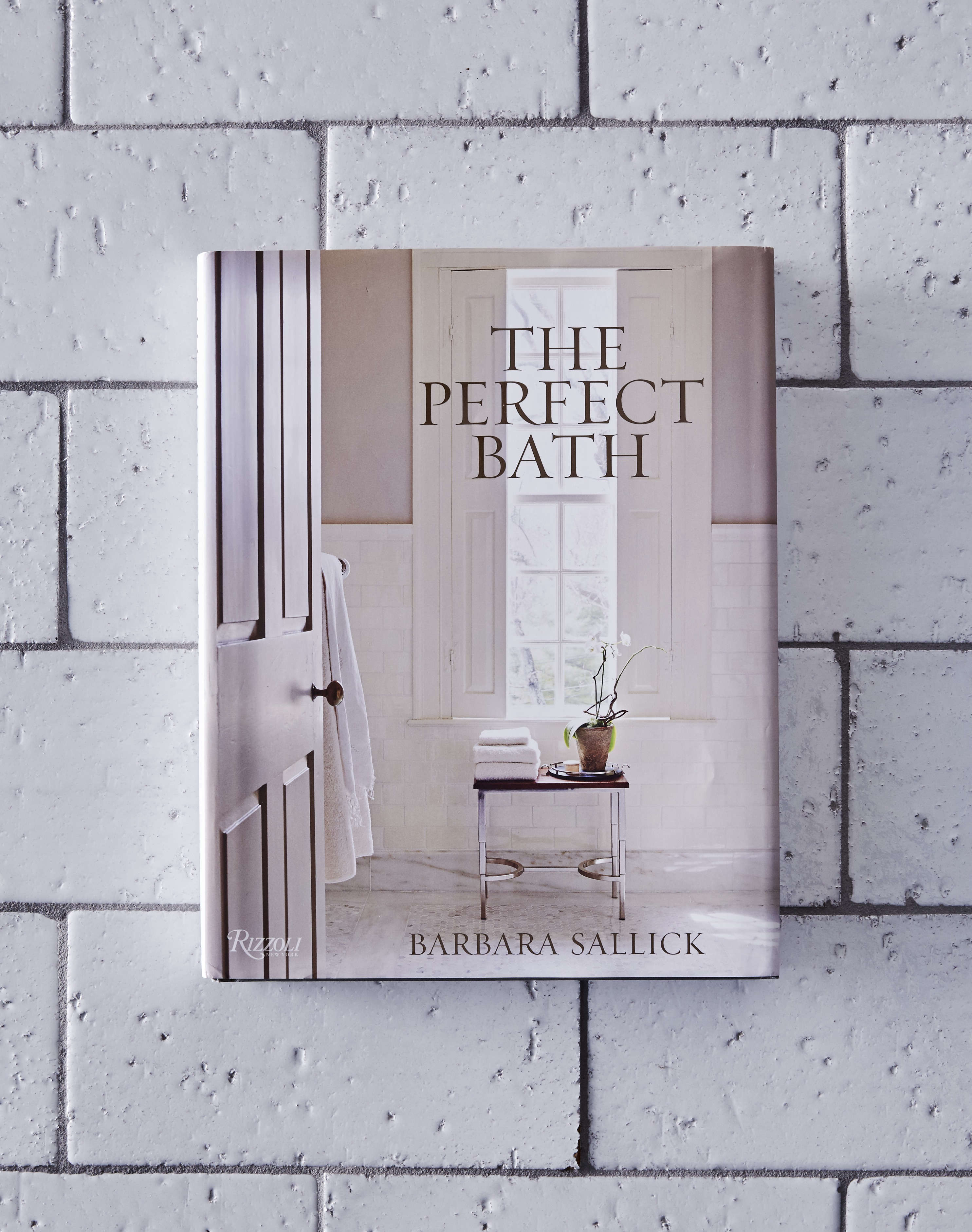 Above: Sallick’s own Connecticut bath is featured on the book’s cover. “My own bath eloquently conveys my love of white,” she writes.

RM: For people who get overwhelmed making decisions, do you recommend they just go all-white in the bathroom?
BS: I’m OK with that, but I’d steer them toward a beautiful white—say, by finding a handmade white tile or a really pretty marble that will add some dimension. Keep it simple, but make it pretty. I know it’s easy to get overwhelmed with the choices—we alone must have 50 shades of white tile. The goal is a bath that’s warm and inviting, and that you’re happy to spend time in every day.

The Perfect Bath by Barbara Sallick is $37.09 on Amazon.

Browse all of Remodelista’s Expert Advice posts, including:

Object of Desire: An Artful Loo Roll Holder from BDDW