When designer Matt Dick wraps presents, there is no wrapping paper in sight. At a recent workshop in his San Francisco studio, the founder of Small Trade Company demonstrated how to use bits of newsprint, flyers, and fabric scraps—in his words, “very pedestrian” materials—to create one-of-a-kind holiday packages.

N.B.: Matt will host a “Wanderlust Winter Market” from 10 a.m. to 5 p.m. tomorrow and Sunday at his showroom at 550 Florida Street, Studio D, in San Francisco. On offer will be furniture, art, bags, jewelry, Japanese soaps, and more “to raise the holiday vibration for everyone,” he says. (This weekend we’ll be downstairs at Heath Ceramics at our annual Remodelista Holiday Market, so come by to see us, too.) 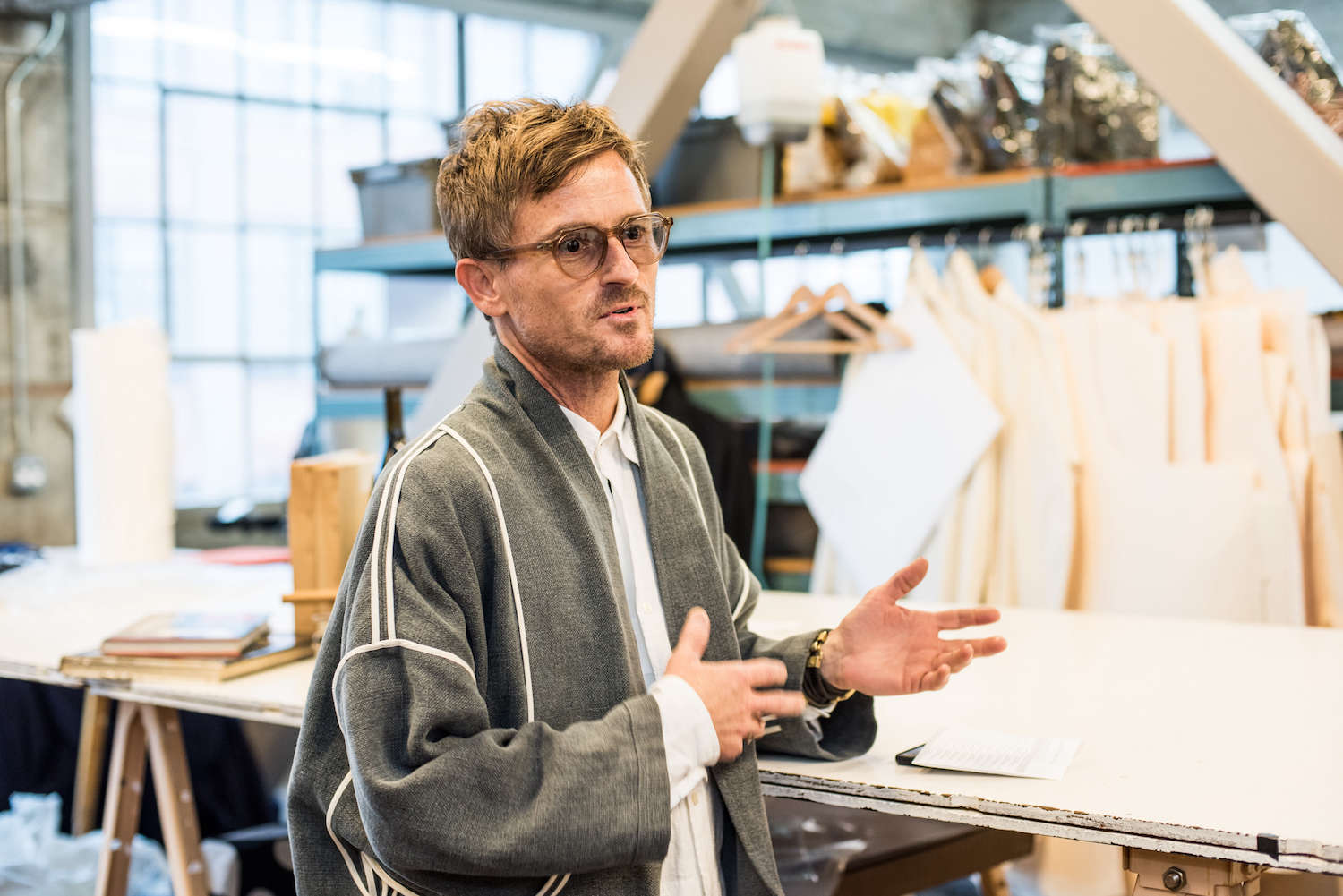 Above: “Japan is a great place to start for inspiration,” says Matt. “The design is very elemental.” 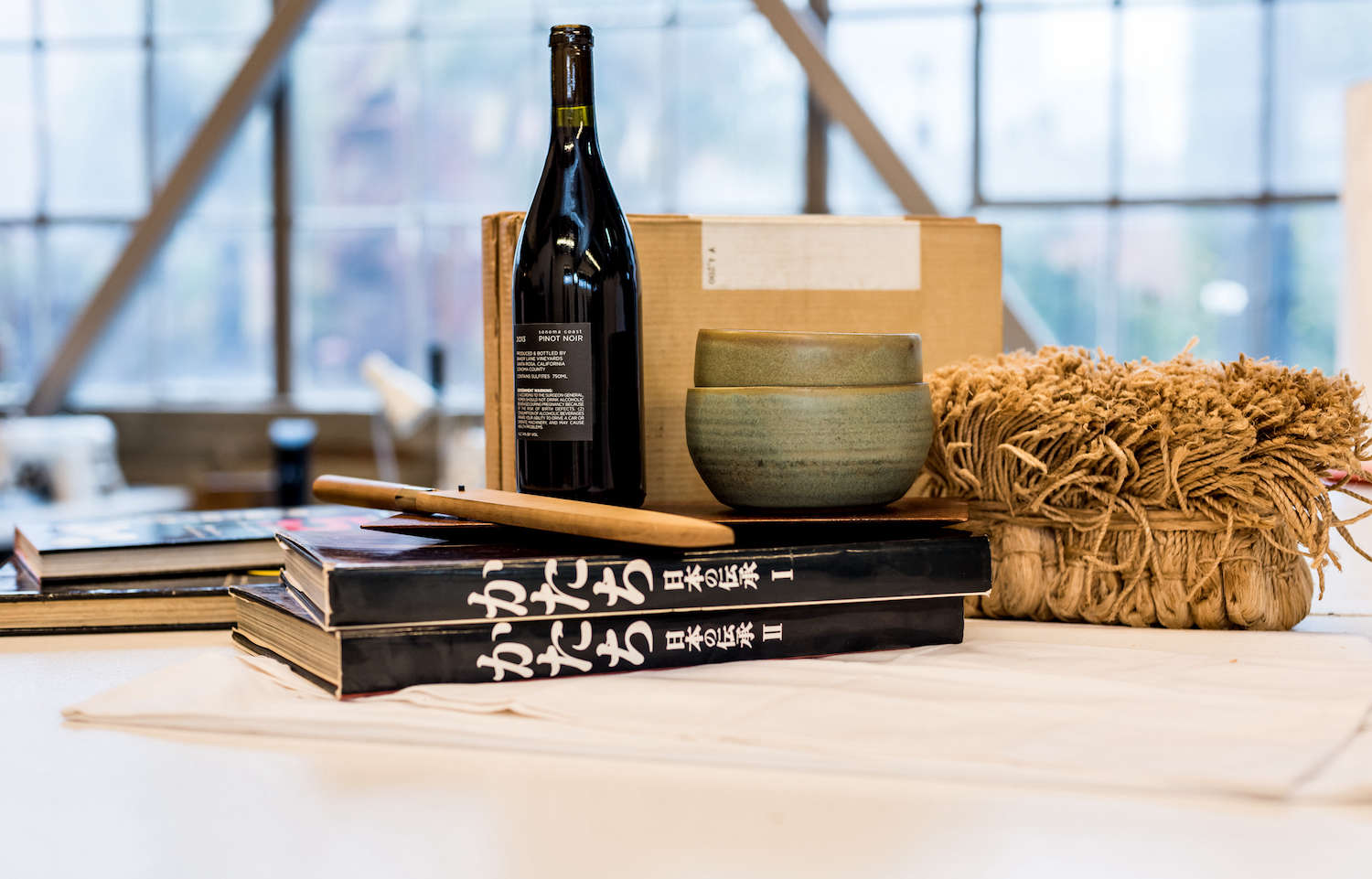 Above: Matt does not shy away from wrapping awkwardly shaped objects such as wine bottles or ceramic bowls. “Take it as a design challenge and figure it out,” he says. 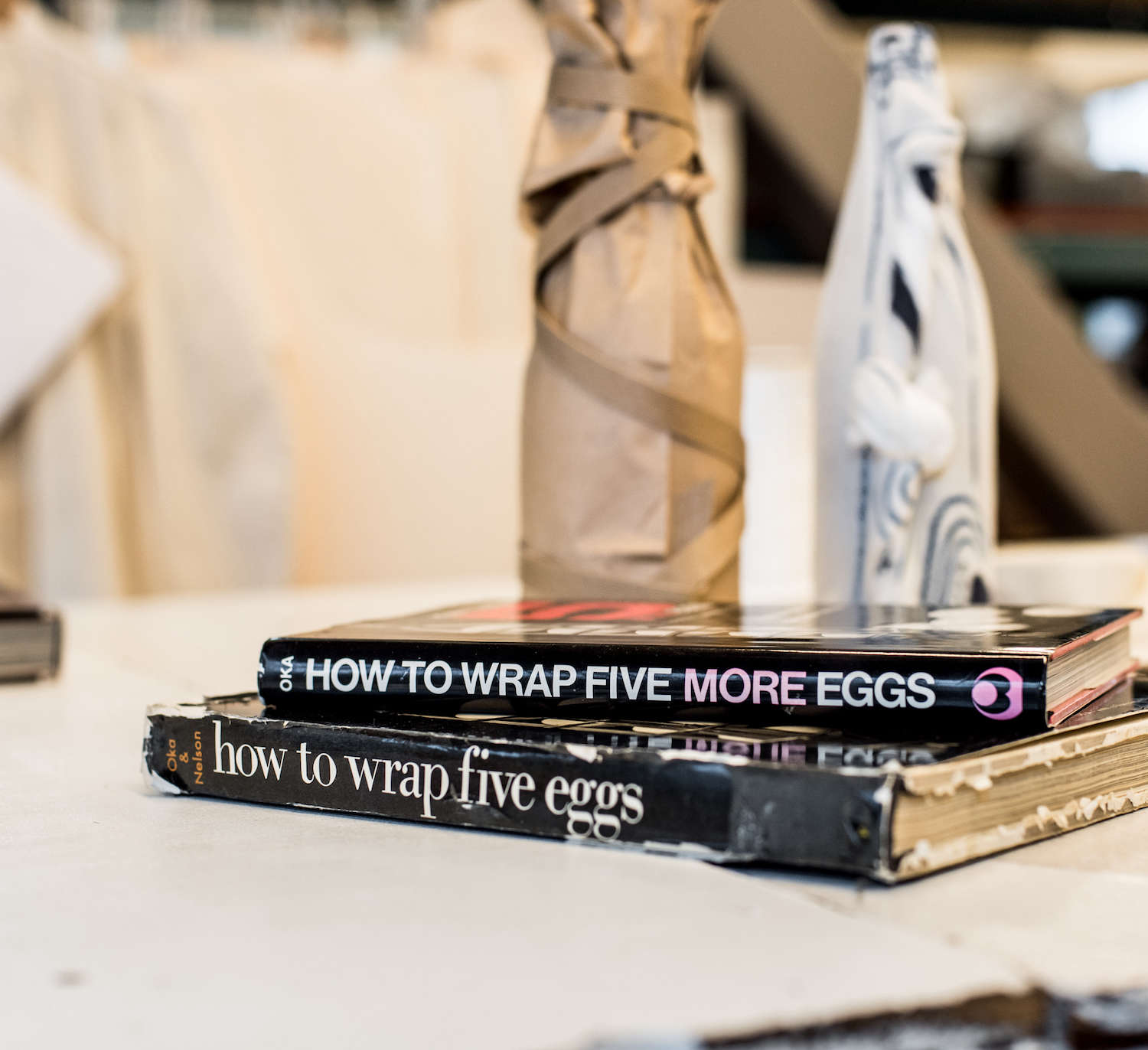 Above: Matt encouraged the class to pore over his first edition of How to Wrap Five Eggs by Hideyuki Oka, a visual dictionary that describes how common things were once wrapped at Japanese markets. 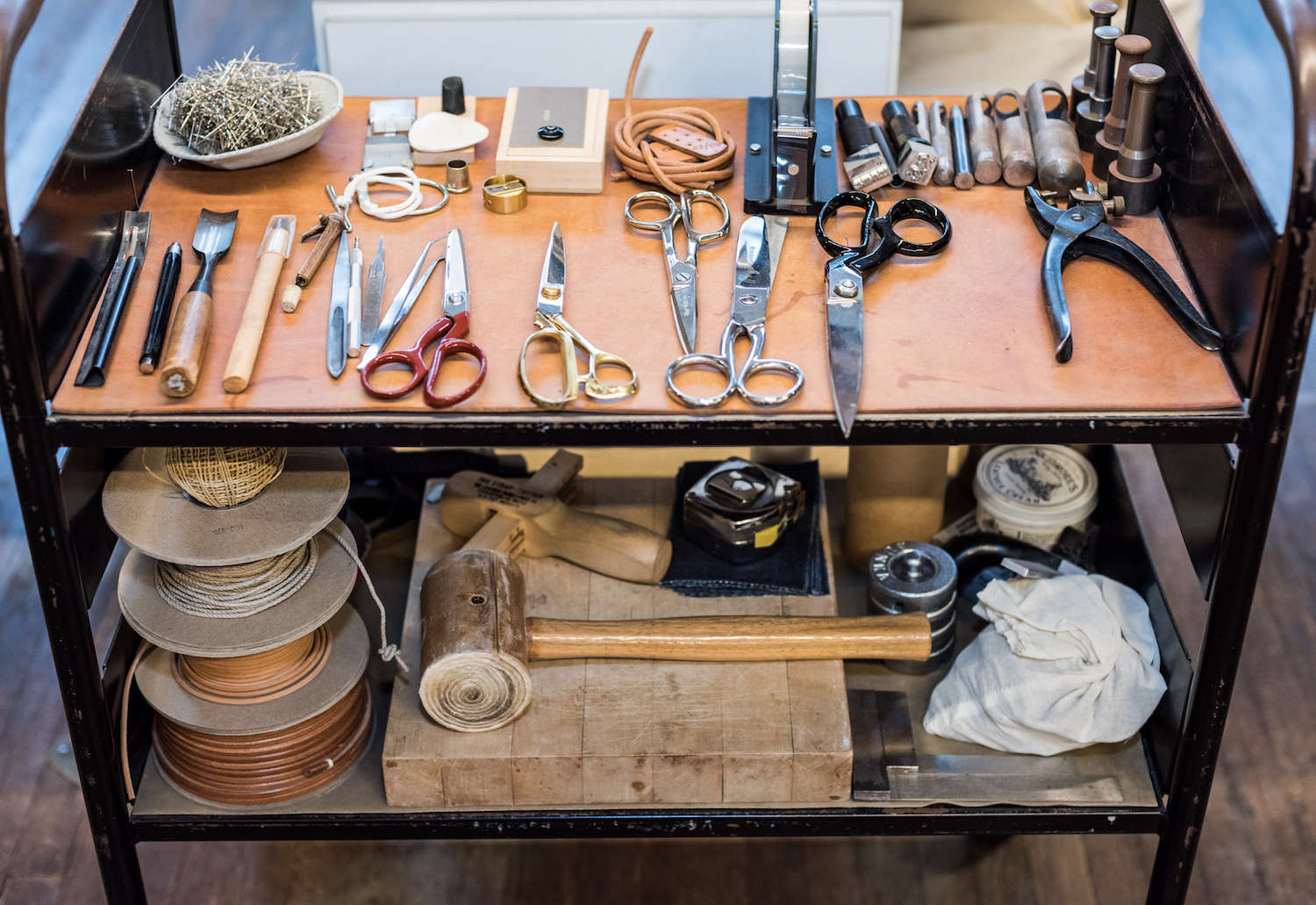 Above: Matt uses his studio tools, some of which he’s repurposed, to wrap gifts—a woodworking tool comes in handy to carve leather straps, for example. He stores the tools on a vintage surgery cart, arranged by their purpose: cutting, punching, pinning, stitching, etc. 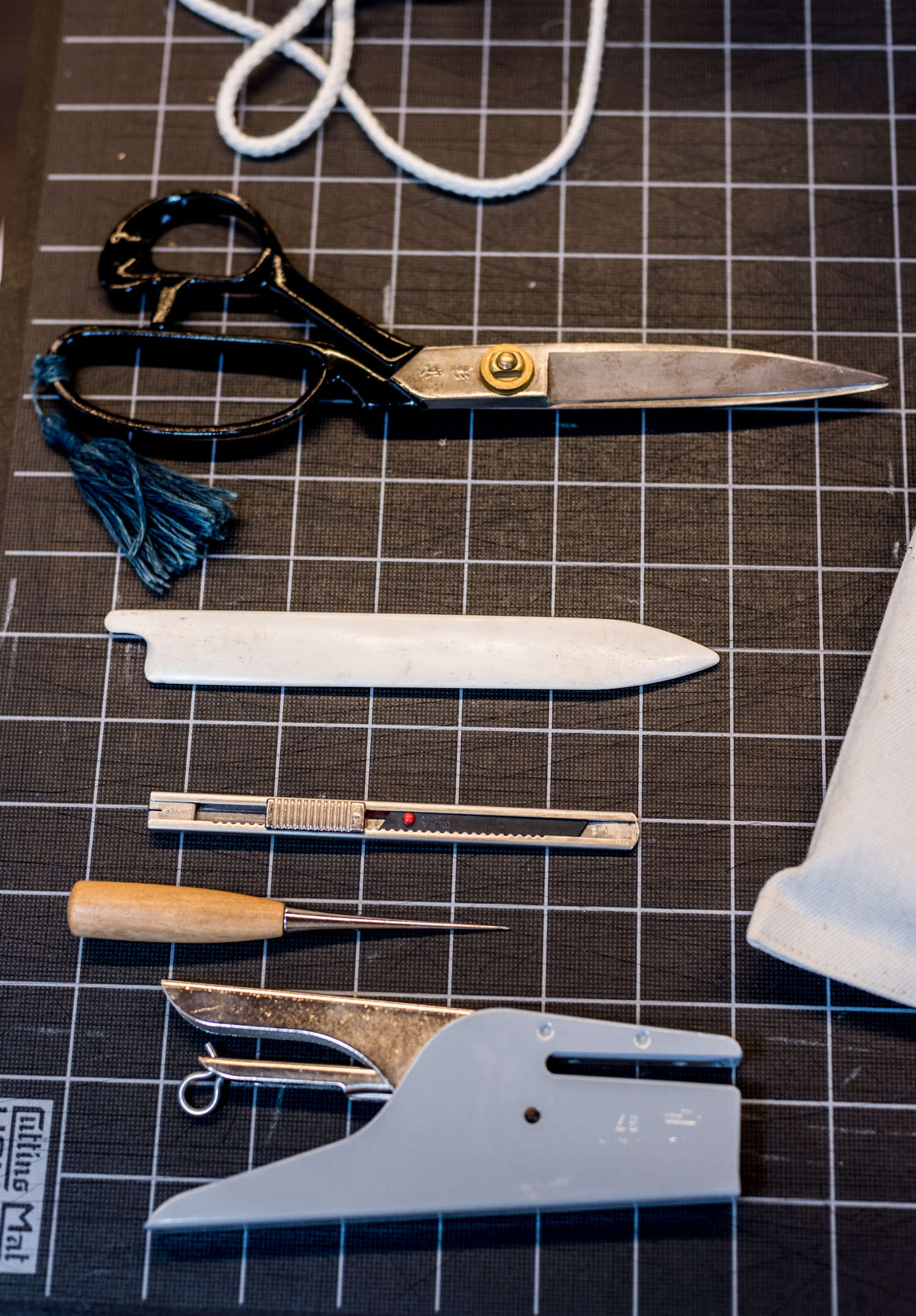 Above: A stapler, bone folder, and blades rest on Matt’s work surface, along with his fabric shears, distinguished by a tassel. (He has separate scissors for cutting paper and fabric to prevent the blades from getting dull.) He also showed the class one of his favorite pairs, Fringe Scissors (not pictured) from nearby Bell’Occhio. 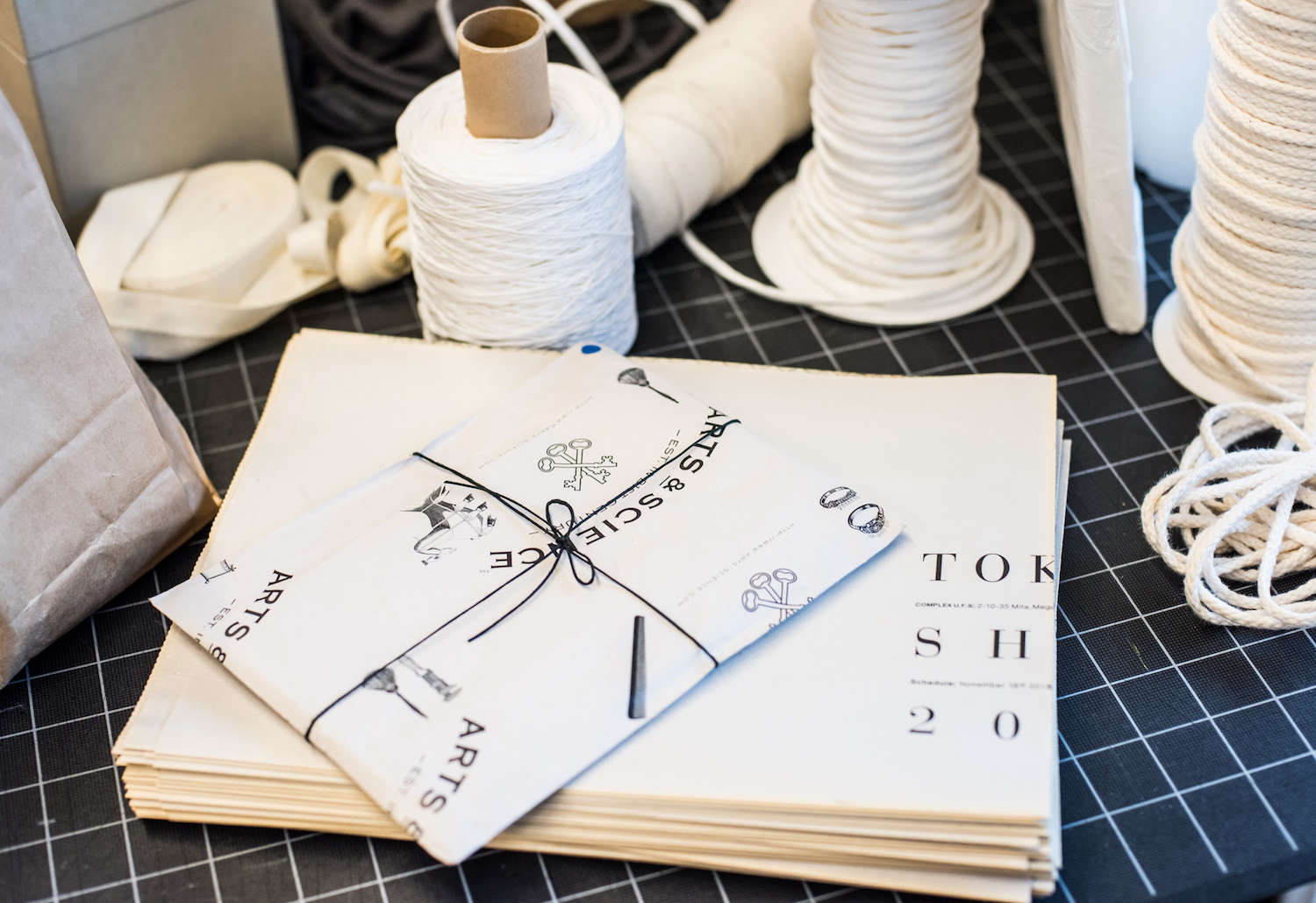 Above: “Keep things around that are beautiful,” says Matt, and you will always have something on hand to wrap a gift. Over the years he has saved: Issey Miyake shopping bags from his first visit to Japan in 1997, oversized sheets of paper printed with pictures of discarded wrapping paper by artist Colter Jacobsen, and (shown above) paper from Arts & Science in Tokyo.

If you have a nice piece of paper or fabric that’s meaningful to you, says Matt, “you can figure out who’s the right person to give it to.” 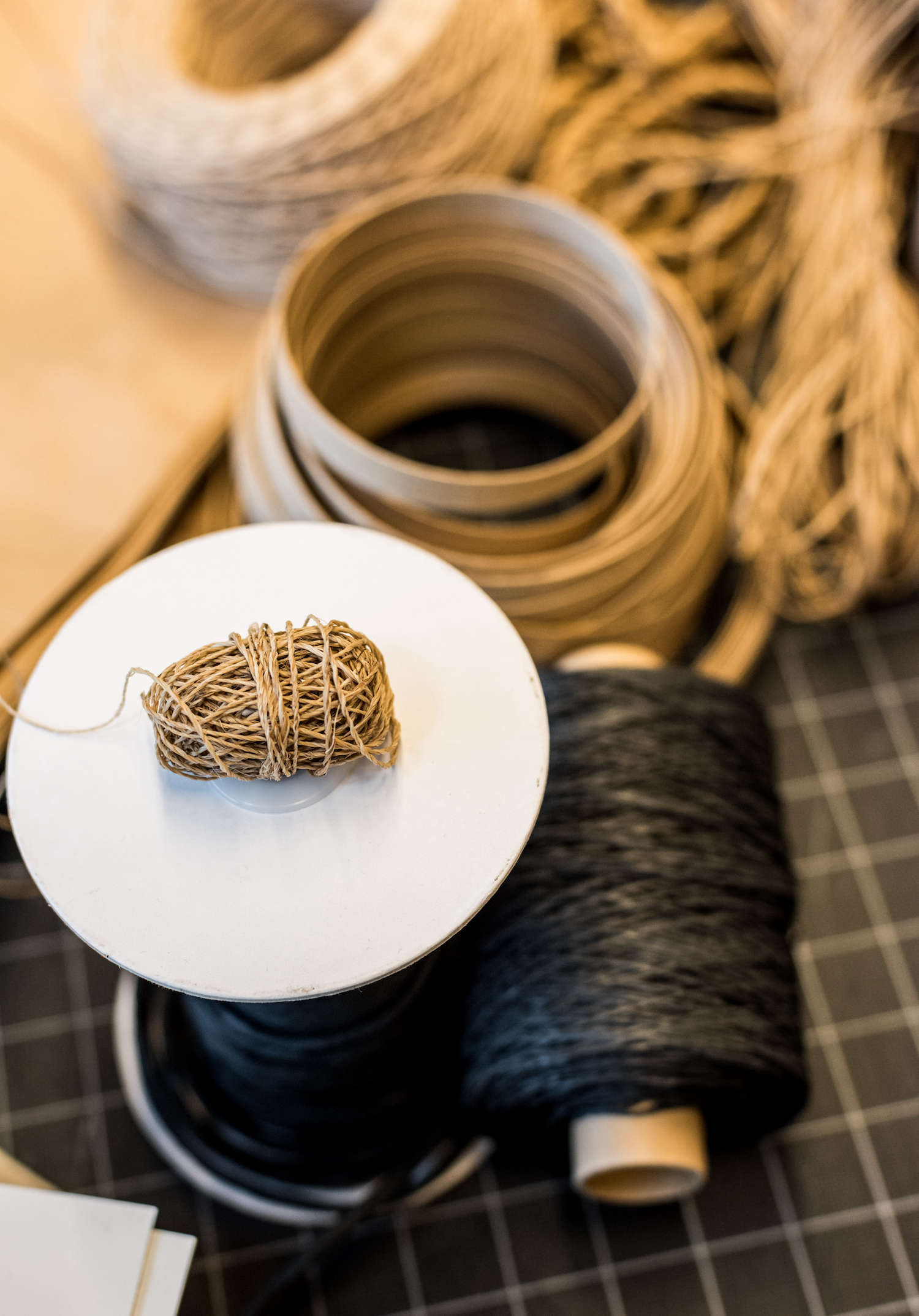 Above: Matt wraps with recyclable materials “meant to withstand multiple repetitive uses, like wood, glass, metal, and straw.” The black ribbon is twisted paper. Matt found some of the rush and reed shown here at The Caning Shop in Berkeley. 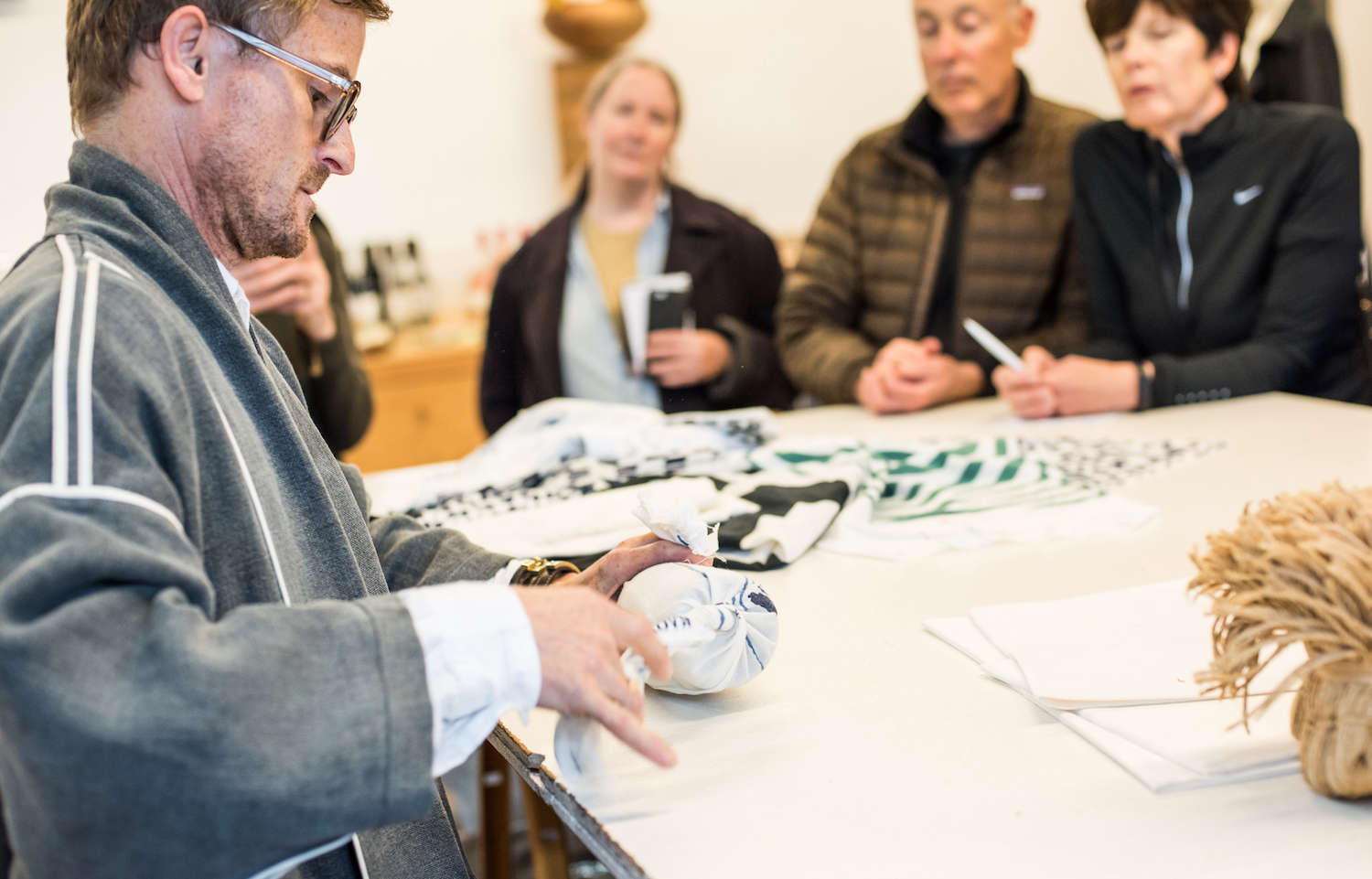 Above: Matt wrapped a wine bottle in a furoshiki cloth he found in Japan. “Fabrics are ideal for wrapping a bottle,” he says.

Roll the bottle in the center of the cloth and twist the cloth at the top and bottom. “Then tie the smallest, tightest knot you’ve ever tied,” said Matt. He urges his students to keep working the cloth until it can be tied. “You’ll be surprised how much it will stretch.” 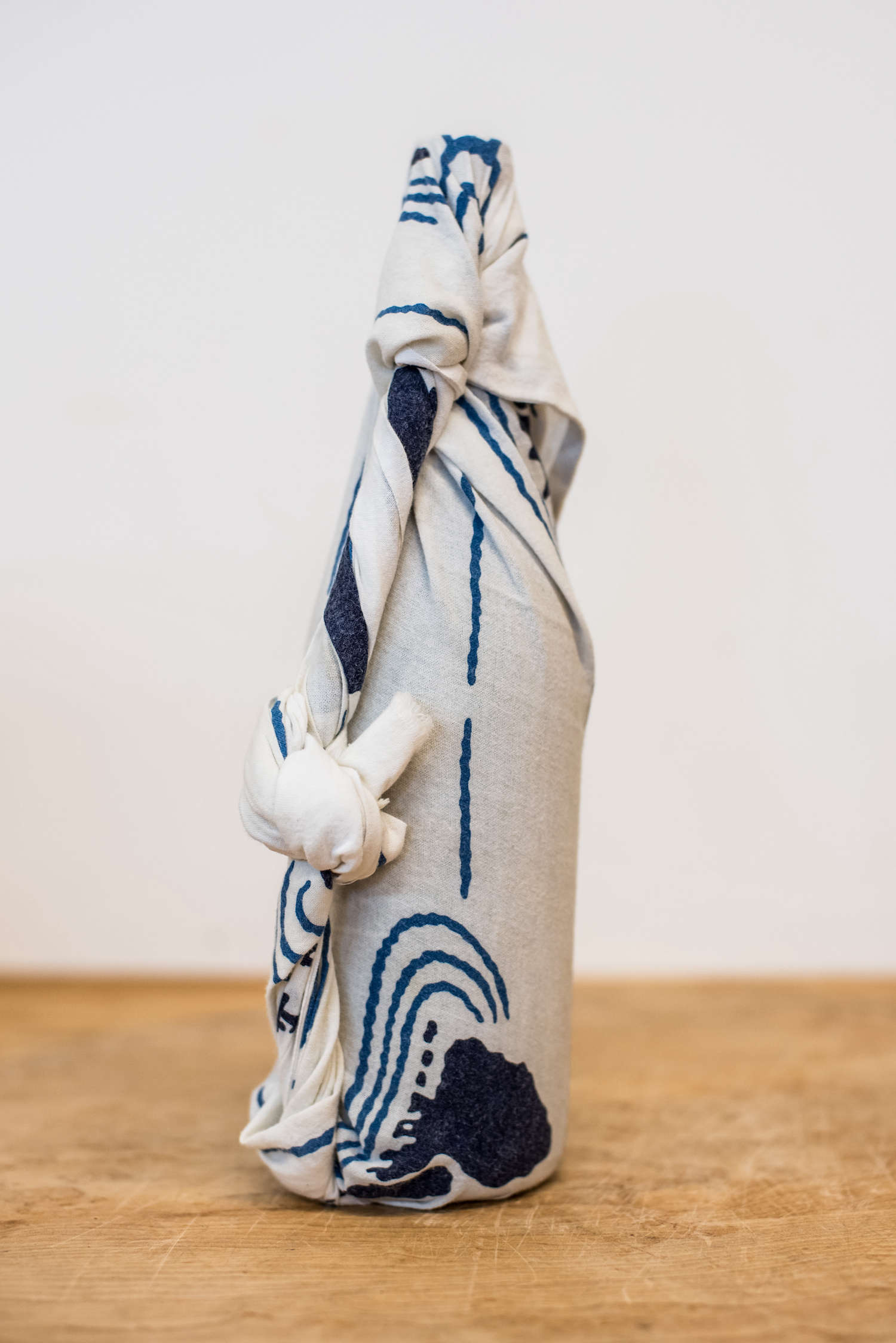 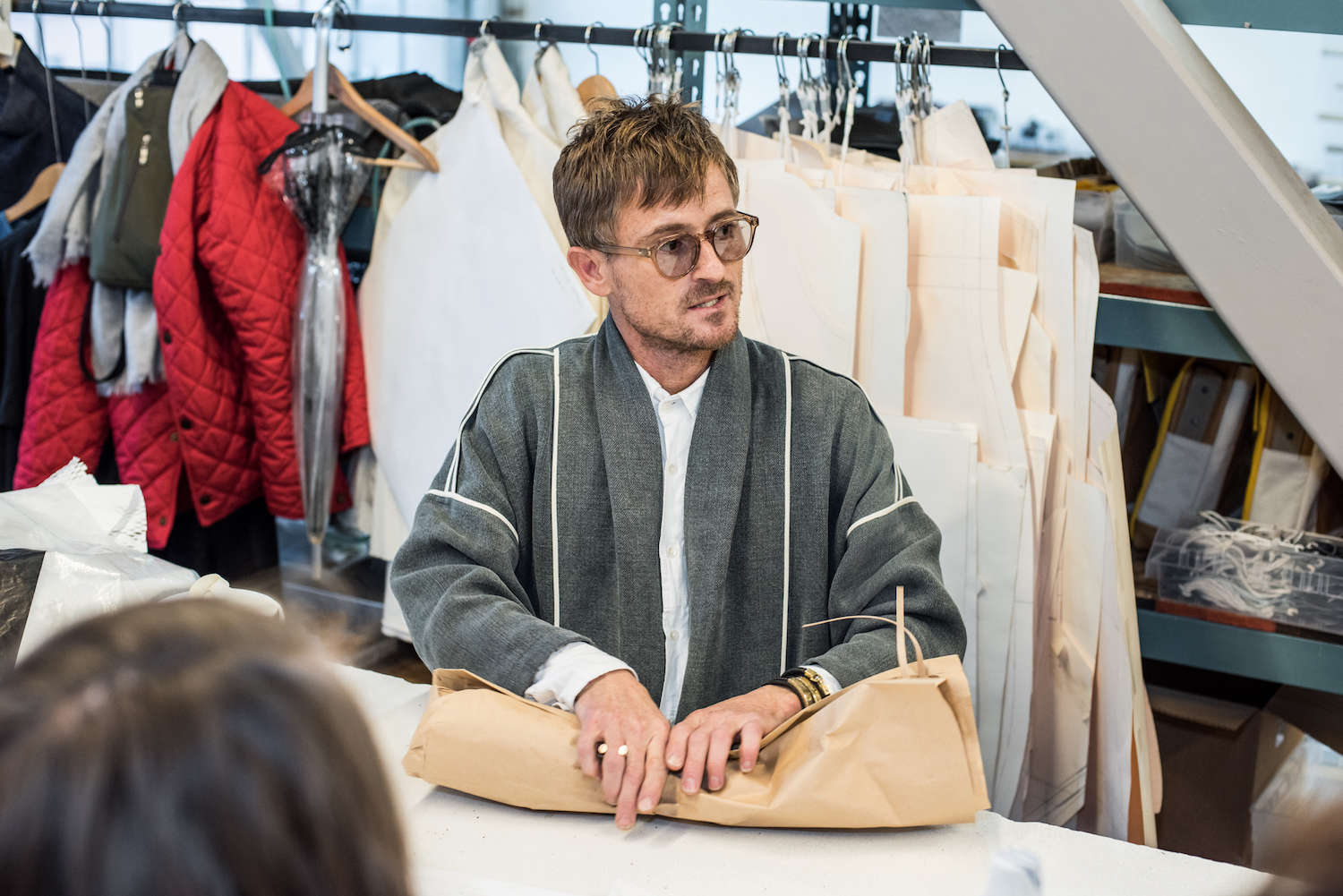 Above: Matt wrapped a bottle of champagne in one of his treasured paper rice carriers, also from Japan. “A champagne bottle in a wine bag is like a really expensive knife in a pleather case,” he says.

Wrapping a round bottle in a flat sheet will give it more dimension, he says. Put the bottle inside the envelope, fold up the bottom corners, and then polish the seams neatly by using the weight of the bottle against the table. 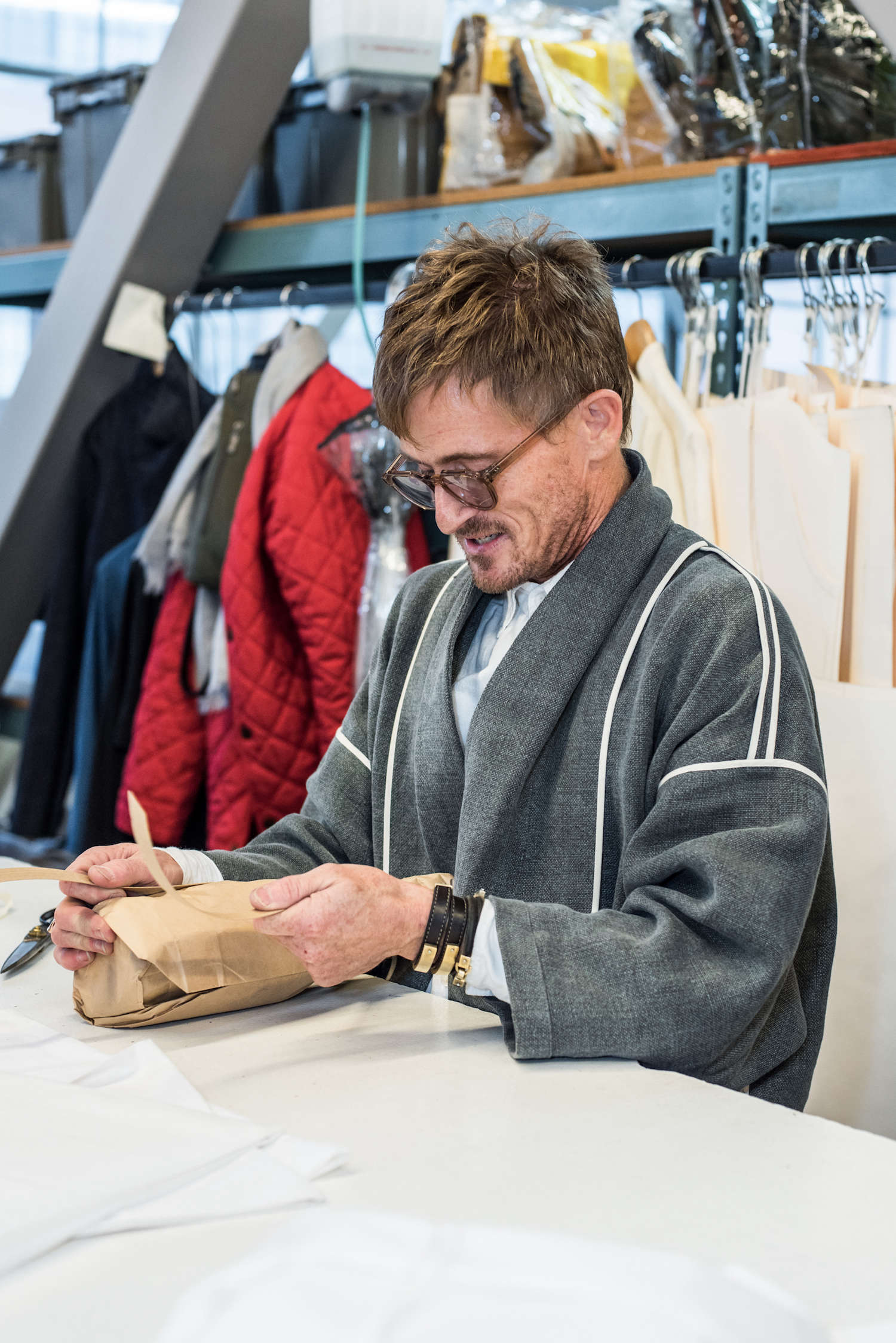 Above: Matt crisscrossed the bottle with pressed paper ribbon. “It takes a little bit of romance to get it to work,” he says. Finally, he folded one end of the ribbon into itself and locked it in with pressure. “You don’t want to do this in bulk,” he says. “Maybe as a wedding gift for people who appreciate craft paper.” 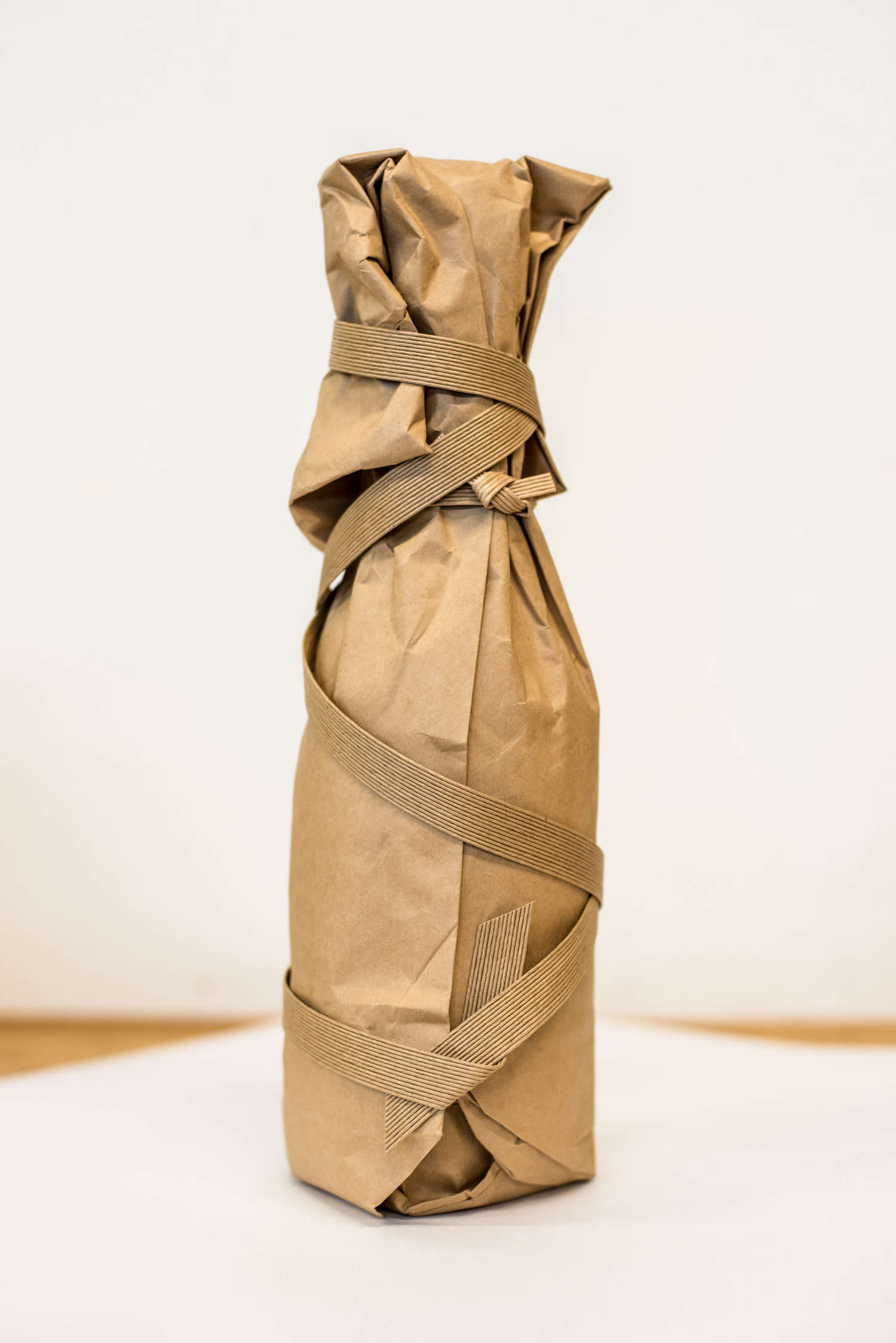 Above: The champagne bottle “looks like it wants to be one of those Veuve Clicquot collaborations,” he said. 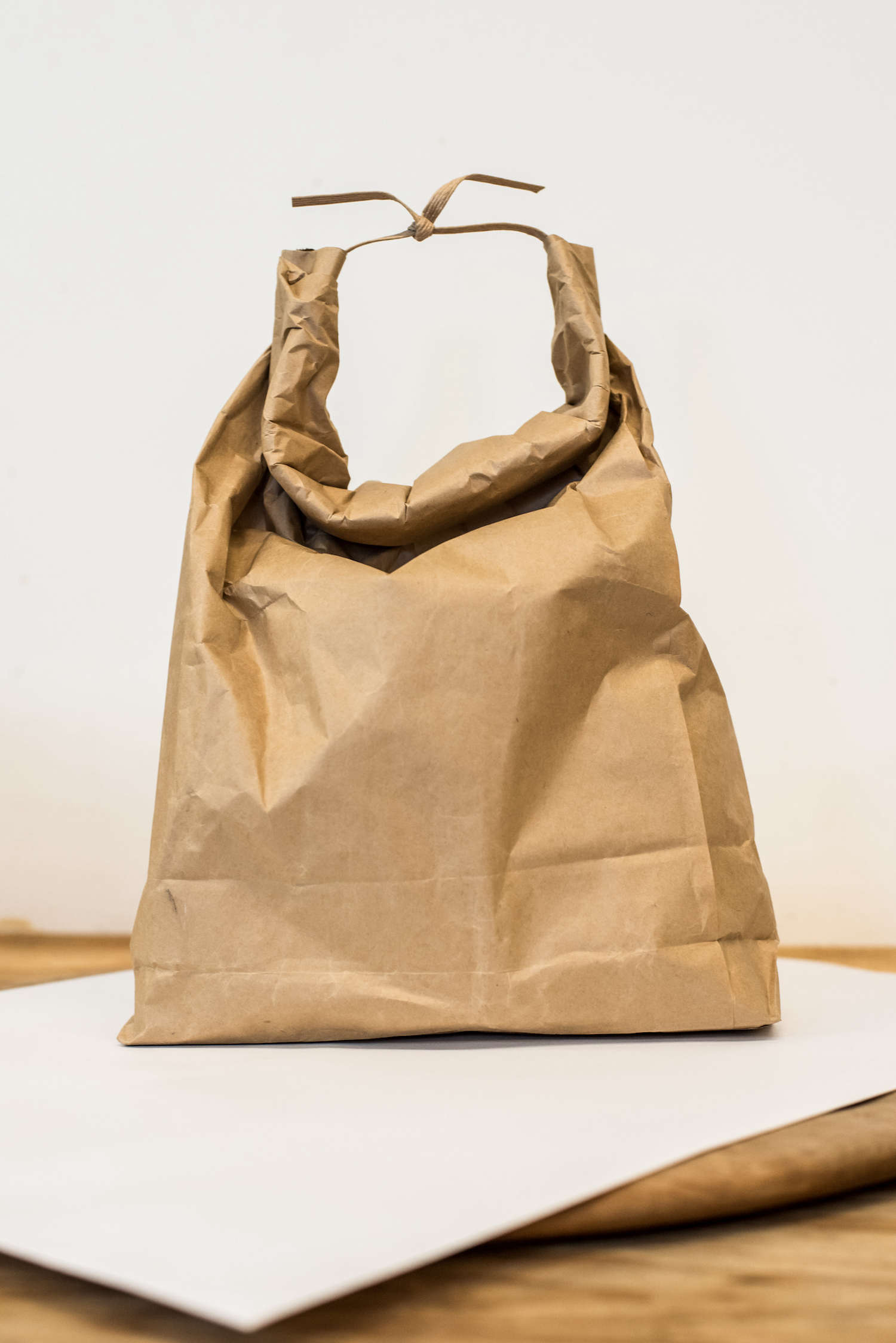 Above: To demonstrate how strong a paper rice bag is, Matt put 10-pound and 5-pound hooks inside one and passed it around. 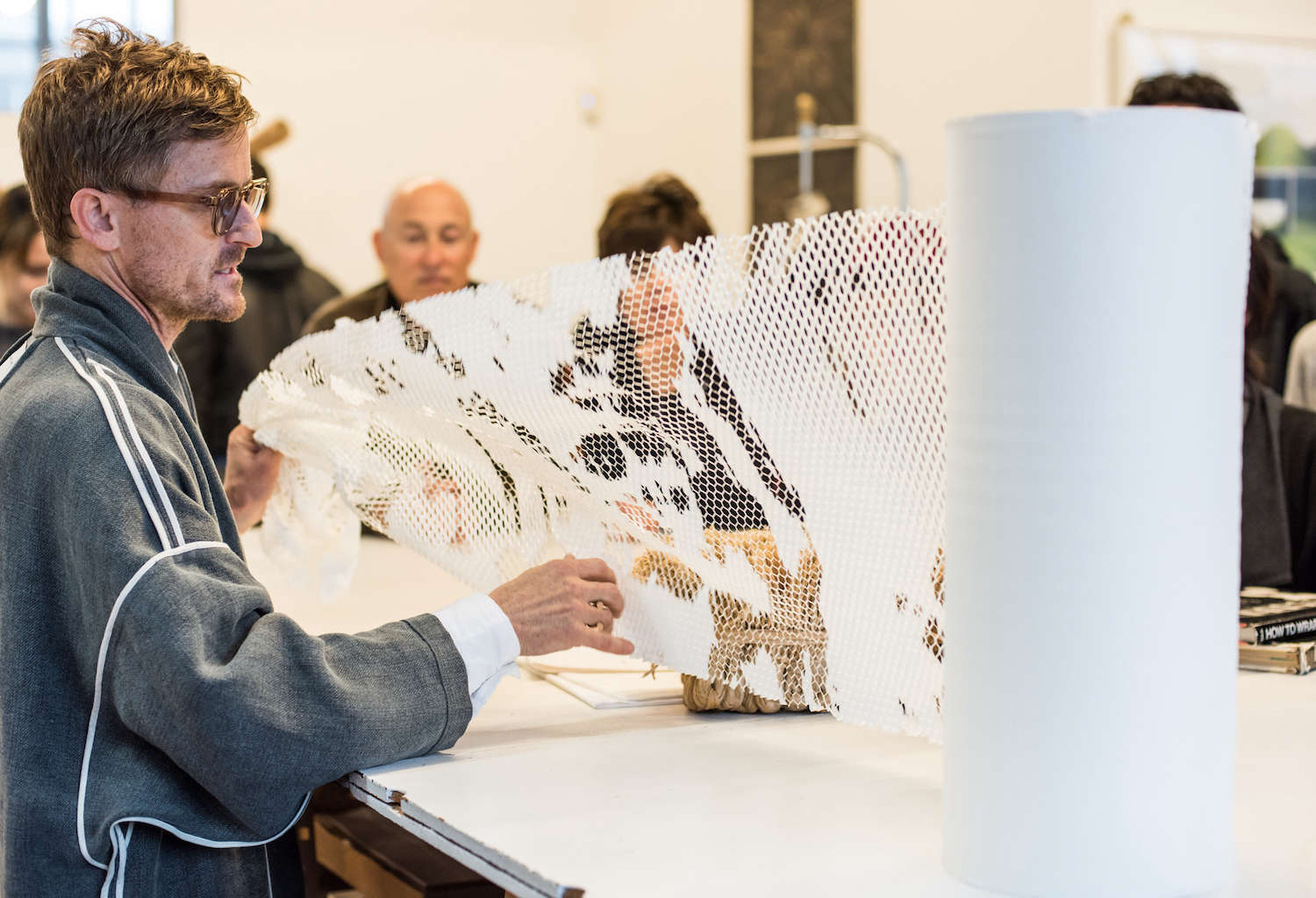 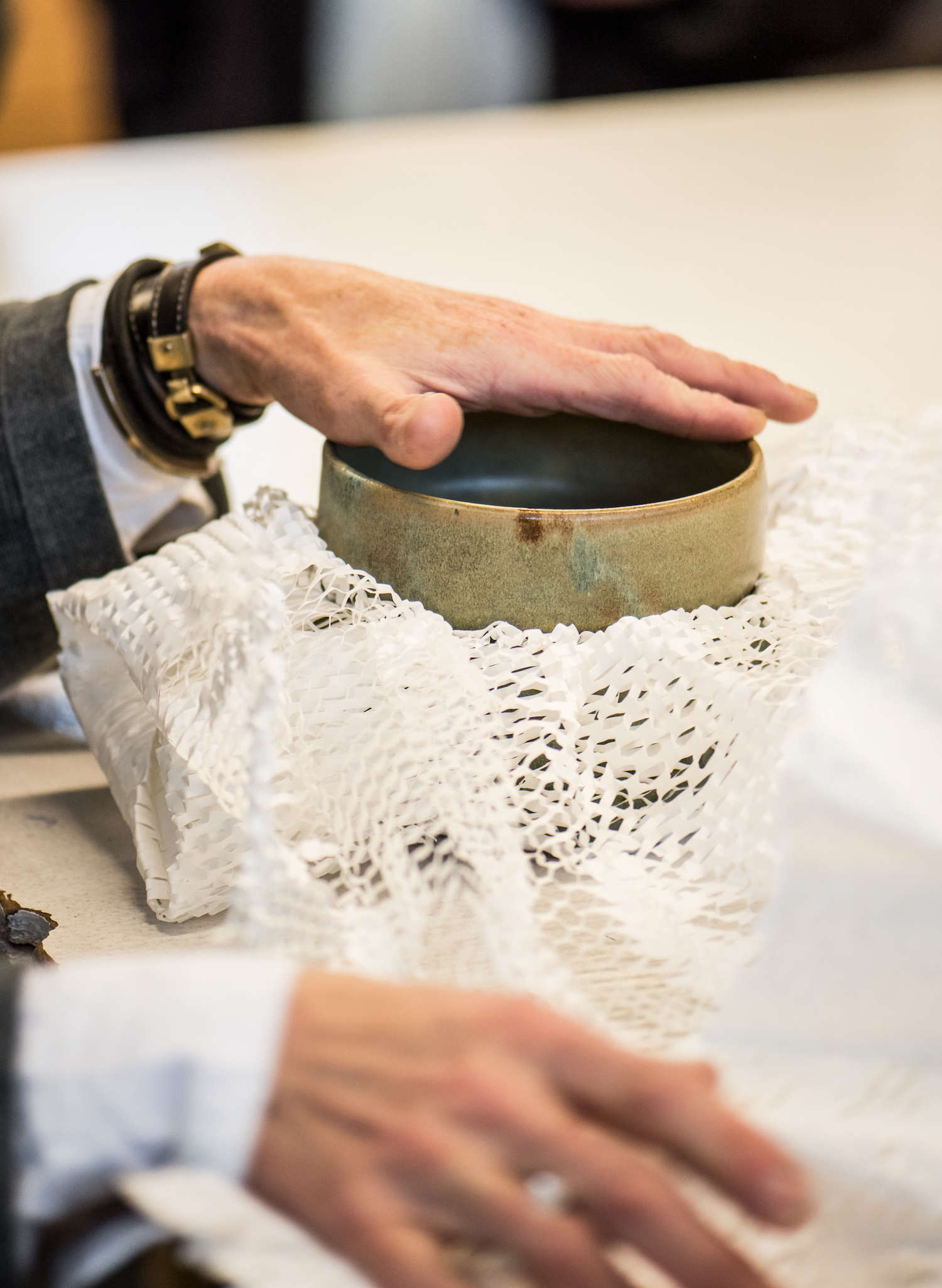 Above: He used the paper to protect two stacked bowls from each other. “An arsenal of crumpled papers comes in handy here, too,” he says. Matt presses the expandable paper onto itself, and it stays put.

“I try not to use tape,” he says, while conceding that double-sided Scotch tape can be helpful. “As long as you know someone on the panel of judges, you can probably get away with it,” he says jokingly. 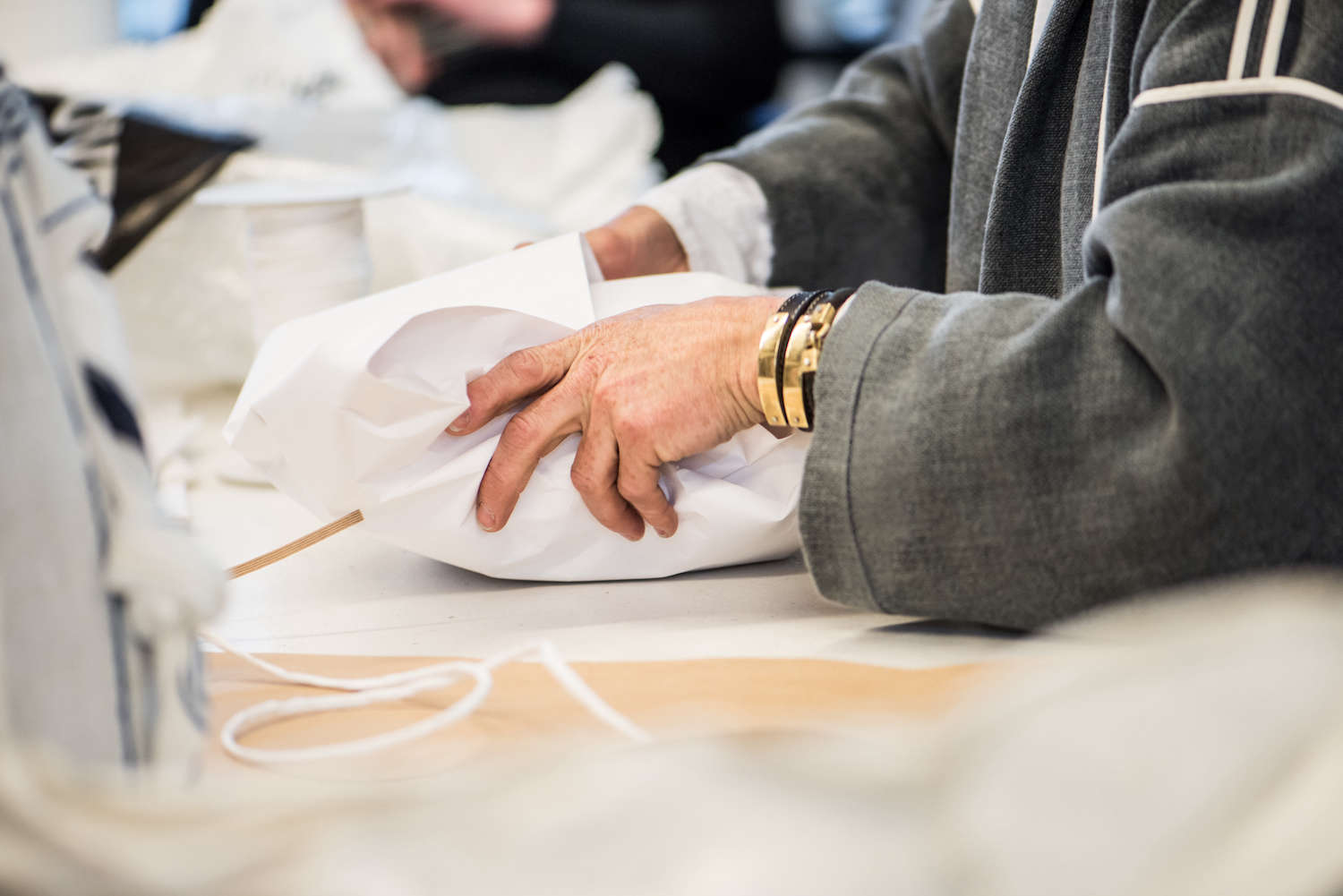 Above: To wrap the bowls, Matt chose an oversized white envelope from ULine. He folded the edges together and pressed gently. “I’m going to keep the visual language that it’s an envelope, but give it a little massage,” he says.

He used white twisted-paper ribbon to tie the paper into a parcel; he untwisted some of it, and twisted other parts even tighter. If you cut a little slit in the ribbon, he says, you can incorporate another element and insert it, but “that’s the advanced class,” he said. 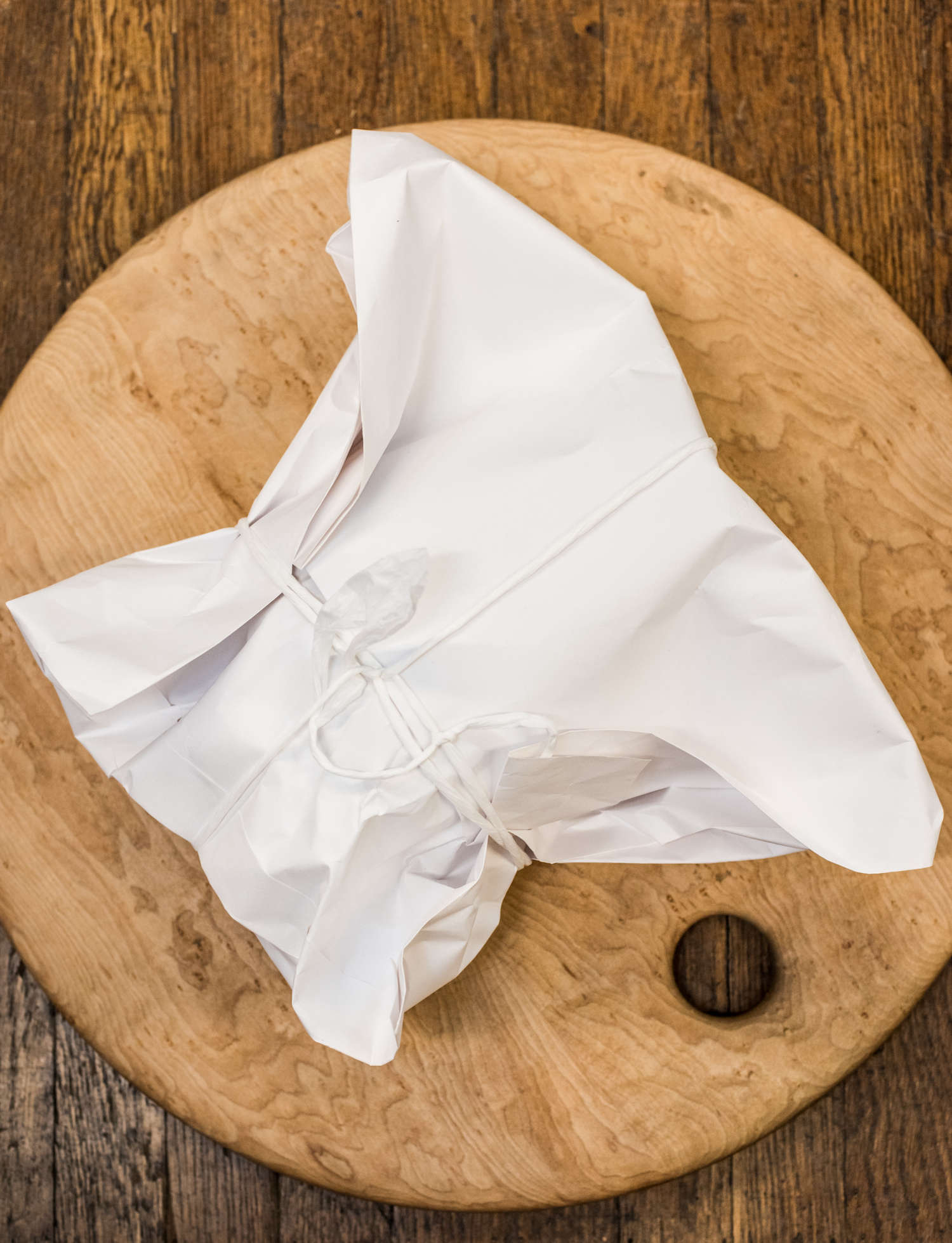 Above: Matt’s freeform white parcel containing the Heath bowls “is in the spirit of John Chamberlain’s crumpled cars,” he says. There’s also room to write a note directly on the package.

If you’re going to make a bow that’s layered and complicated, “you’ve just got to go for it,” he says. “I like extremes.” 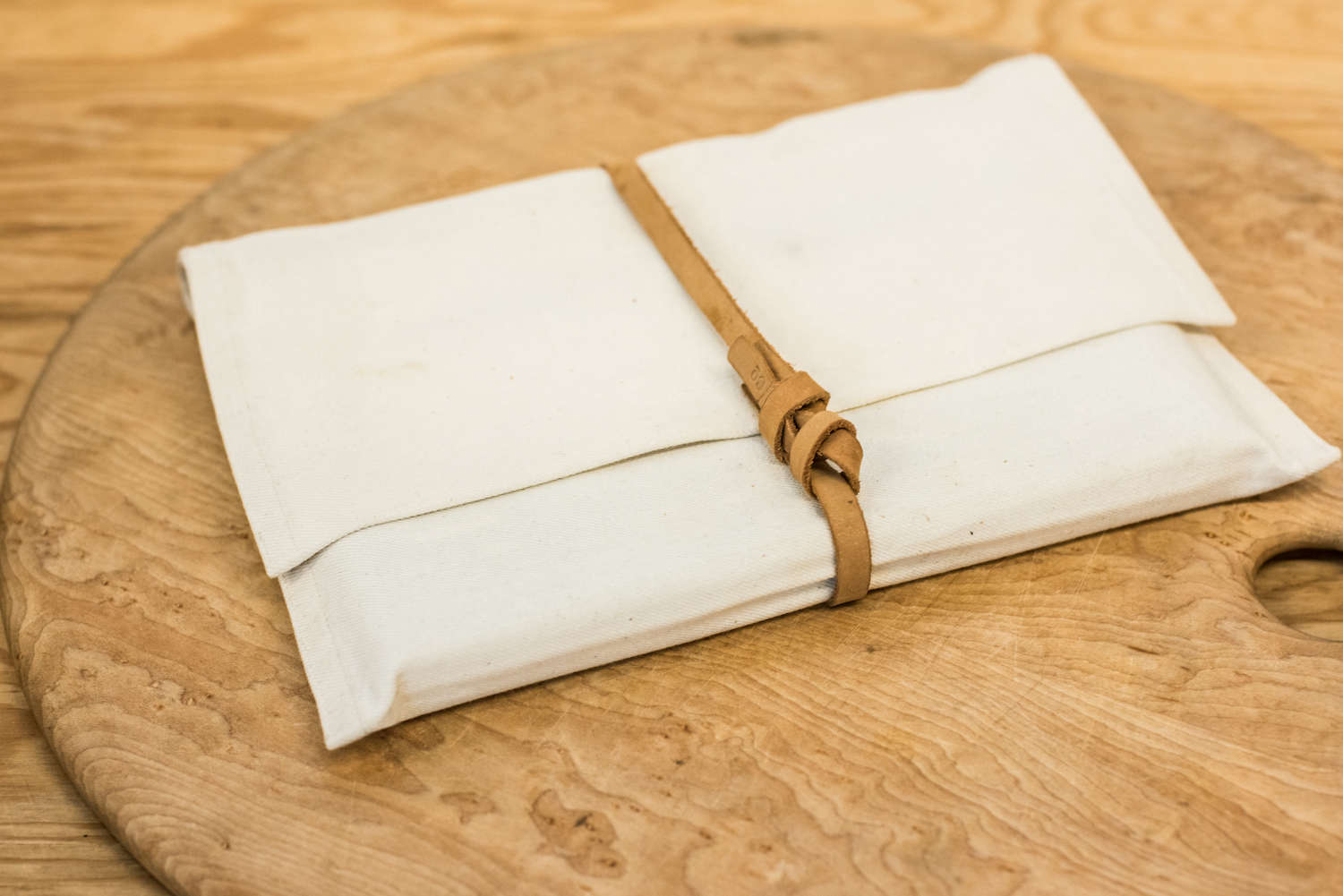 Above: An elegant presentation from one of Matt’s projects: a canvas carrying case tied with a leather lariat.

How to Wrap Five Eggs

DIY: A Trio of Gift Wrapping Master Classes from the Doyenne of Presentation