The email from my friend Stephanie was terse and urgent: “I found a cocktail table for you. It is in a warehouse in Emeryville and they said we can come see it. What time can you go?”

I immediately leapt from my desk and jumped in the car. Wouldn’t you?

Stephanie had spotted a little brass-legged table for sale on a website called Previously Owned by a Gay Man, one of a growing number of online marketplaces for vintage, antique, or gently used furnishings. From 1stdibs, the default showcase for covetable best-of-breed antiques from around the world, to Chairish, a one-year-old site with 5,000 examples of the sort of furnishings your mother might have described as her “good pieces,” there’s something special about something that’s one-of-a-kind.

I suppose everybody has an obsession with obtaining the singular object–something unique, the one and only, the solitary example of perfection in the universe. Ahab sought a white whale. Others searched a lifetime for the Holy Grail. For me? My Moby Dick was a vintage cocktail table.

You know how you don’t want to go to a party and see three other people in the same dress you’re wearing?  I don’t want to walk into someone else’s house and see my cocktail table sitting in another living room. 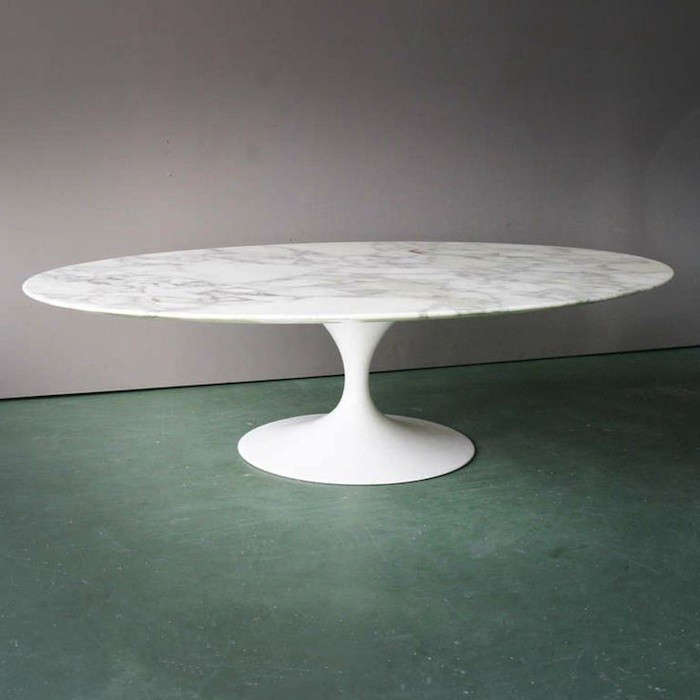 Above: A 1970 Oval Coffee Table by Eero Saarinen achieves one-of-a-kind status via its Italian marble top with distinctive inclusion; $4,000 from Art of Vintage on 1st Dibs.

Anna Brockway, who founded SF-based Chairish after years as a self-described serial redecorator (“My husband and I were always having classic husband-wife smack downs about what to do with armoires that weren’t right anymore for the space”), has a theory about why.

“People think of their homes as an expression of their personal style,” she says. “The same way they think about fashion as an expression of their style. A few years ago, people like Kate Moss and stylists who were working with celebrities brought back the idea of one-of-a-kind vintage fashion. You see old Halstons or Valentinos at awards ceremonies. It’s the idea of honoring great fashion from the past by wearing it in its original form. It has made people think, ‘Yeah, I could go into a store and buy a whole room full of furniture, but it feels more valuable to get something unique, with a history.’ ”

Each vintage furnishings site operates a little differently. On 1stdibs, for instance, many sellers are high-end antiques dealers; buyers and sellers can negotiate price via email and sellers often ship directly from their inventory. At Chairish, most sellers are individuals who upload photos and measurements; sometimes pieces ship directly from the seller and other times from Chairish, which offers storage and a turnkey “concierge service” in San Francisco, Los Angeles, and New York. And San Francisco-based Previously Owned by a Gay Man will store (and deliver) items locally in the Bay Area. 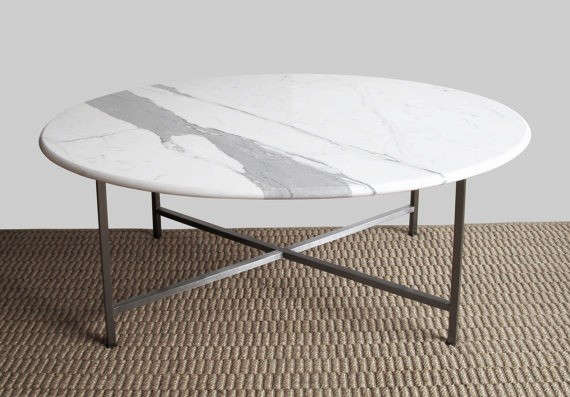 Above: Brooklyn-based James Devlin will make you a custom Dorie Marble Coffee Table (base choices range from satin brass to blackened steel); $1,100 from James Devlin Studio on Etsy.

Which was how Stephanie and I found ourselves the other day peering through the rain at the addresses on warehouses in the East Bay. Then we spied a chain link fence, discreetly ajar: This was the place. What would we find inside?

I’ve been imagining the perfect coffee table for some time now: it has a brass base–but not too shiny–with dimensions of about 30 by 20 inches, and a veined Carrara marble top. How beautiful would that look in a small sitting room with a brown velvet sofa, leather-topped side tables on wheels, library lamps, and my mother in law’s perfect bergére (reupholstered recently in a flax colored linen)?

In the dim light of the warehouse, we picked our way past ghostly shapes: a pedestal dining table, a mid-century dresser, a roll-arm sofa wearing a 1970s plaid. And then– 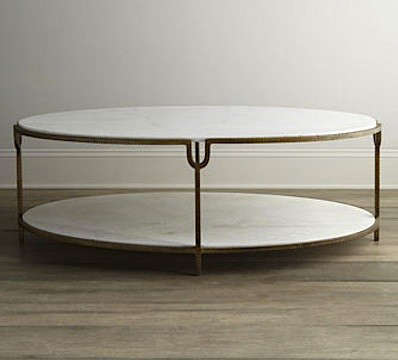 Above: The Olivia Marble Top Coffee Table is $2,000 from Neiman Marcus.

Glinting in a weak shaft of sunlight from the open doorway was a brass cocktail table. As I inspected it, I realized what a funny thing it is, this notion of one-of-a-kind furniture. Most pieces didn’t start out that way. In the not too distant past, this particular 20th century coffee table must certainly have been produced en masse in a factory. But in the ensuing decades, it has had a life–picking up a little ding here, a soft patina there. Objects acquire a uniqueness after you’ve lived with them for a while.

Somewhere in the world, there is probably another nearly identical cocktail table or two: not too shiny, not too big, not too small. Still, at $250 it was one-of-a-kind enough. Except.

“That has to go,” Stephanie agreed. “But I know where you can get a piece of marble cut for the top.”

“Custom?” I asked doubtfully, with visions of dollar signs dancing before my eyes.

So that is exactly what I did. I took the base to Andreas Marble and Stone (owned by a lovely family). And a week later, the little marble topped table sits in my house, making me happy every time I walk past. There is nothing like it in the world.

And what about you? Do you have a special, one-of-a-kind piece of furniture with a story all its own? Tell us about it in the comments below.

N.B.: For more of Michelle’s adventures in decorating, see the rest of her weekly Domestic Dispatches. She’s been on a tear lately; see What We Love (and Hate) About Ikea and last week’s Goodbye to the Romance of the Fireplace.

Made in DTLA: A Young Couples’ New Tiled Furniture Line