Is a room of one’s own overrated? Are closets unnecessary space hogs? Is clutter the enemy? Architect Takaaki Kawabata, a senior associate at Janson Goldstein in New York, and his wife and collaborator, designer Christina Kawabata, recently transformed a 1960s log cabin in Garrison, New York, into a dramatic open-plan design in which family togetherness and excess-free living are built into the architecture.

At first sight, the 1,100-square-foot cabin had looked so awful that the real estate agent apologized for wasting Taka’s time. A third-generation architect who grew up in a one-room farmhouse on the island of Ishikawa, in Japan, Taka was on a mission to move his family out of Williamsburg, where their rent had quadrupled over the past couple of years, to a rural setting within commuting distance of Manhattan. Before getting on the train home, he had phoned Christina to tell her that nothing had panned out. But by the time his train reached NYC, and he had had a chance to look at the cabin’s plans, he called back to report he had found their place. 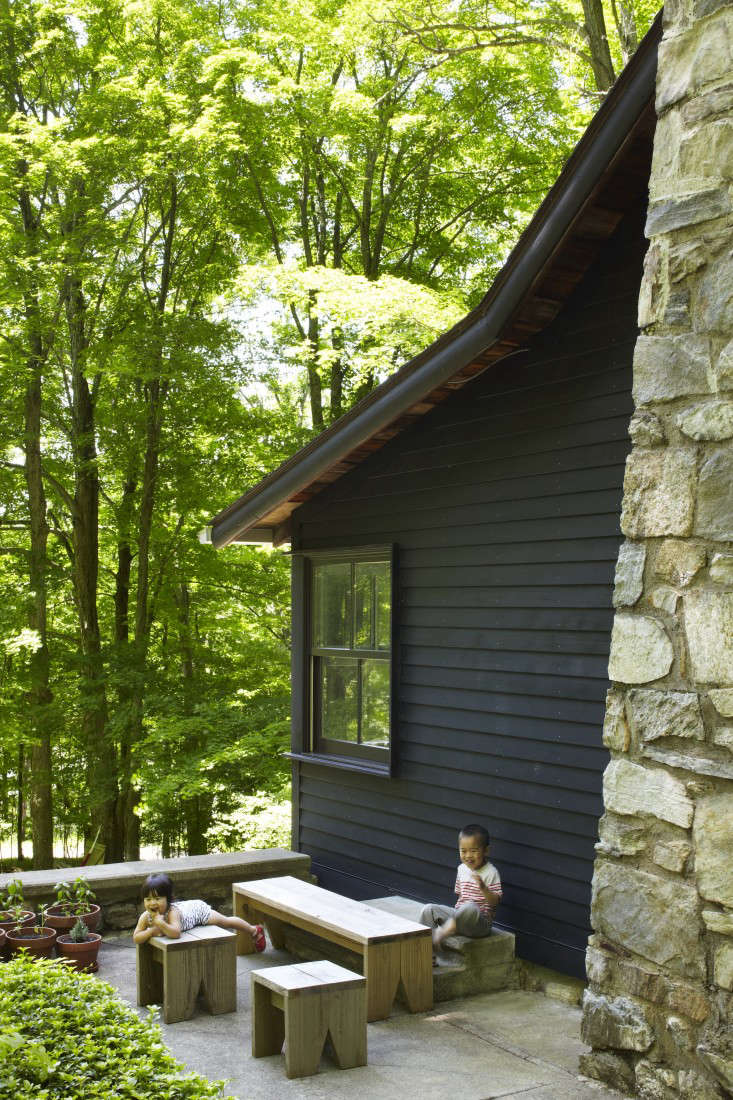 Above: The Kawabata’s children, Tozai, six, and Akari, three, play on benches and stools made by their parents from leftover lumber left outside for a year to turn gray. The house is located on 2 1/2 acres of woodland and was built in the 1960s as a log cabin. After discovering that the logs were merely cosmetic, Taka decided to replace them with black cedar siding modeled after traditional Japanese farmhouses. (He initially attempted shou sugi ban, burned wood, but didn’t have the right cedar and instead used a Benjamin Moore stain.)  As with all remodels, the building process was arduous and not without drama: Taka hired and fired two contractors who had failed to show up on schedule and to get the work done to his liking. He ended up doing much of the labor himself on weekends with help from family and friends–”my father came from Japan to put up the siding with me, and my mother helped restore the chimney; we camped out on the property and neighbors brought us lunch.” The house cost $335,000 and the remodel, which took a year, totaled $50,000–enabling the couple to stay within a $400,000 budget. 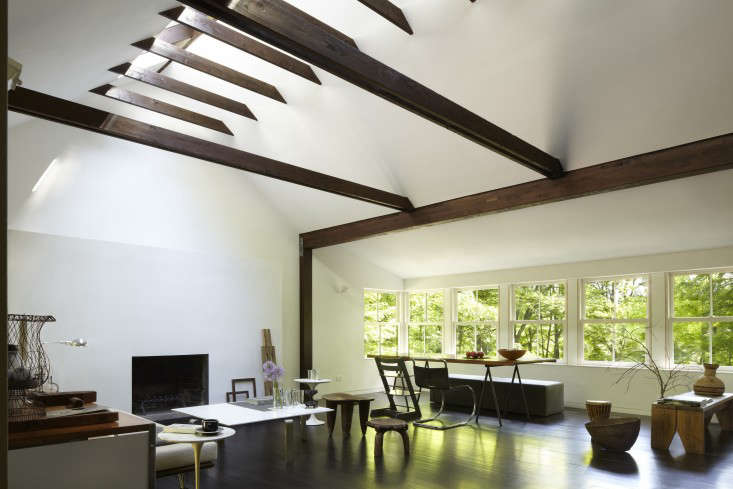 Above: The interior was a warren of small, dark rooms without any connection to the outdoors. Taka remedied the situation by introducing an 18-foot-by-4-foot, north-facing skylight plus a ribbon of south-facing windows from Marvin. The setup was inspired by Japanese communal one-room houses called minkas that originated in the 17th century (and by the open-plan house Taka grew up in). Taka planned the placement of the windows around the way the light travels through the house during the day. 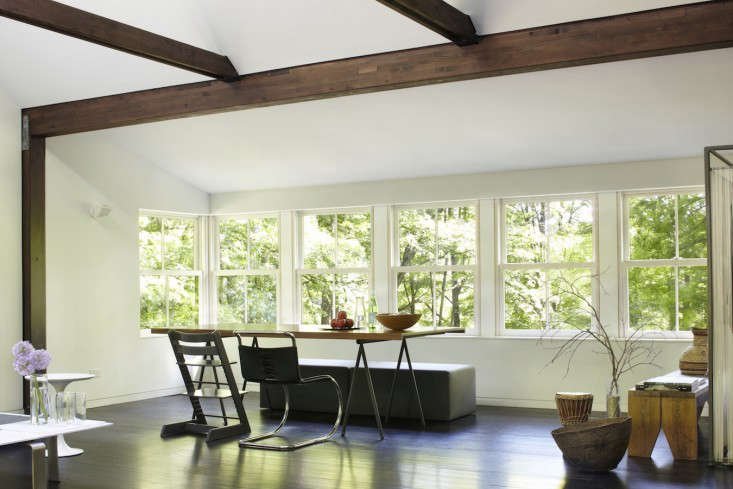 Above: Taka and Christina designed the dining table, which looks out on a mountain view. To create a monolithic look, they stained the original oak and maple floors black, a messy job that Taka hired pros to do. 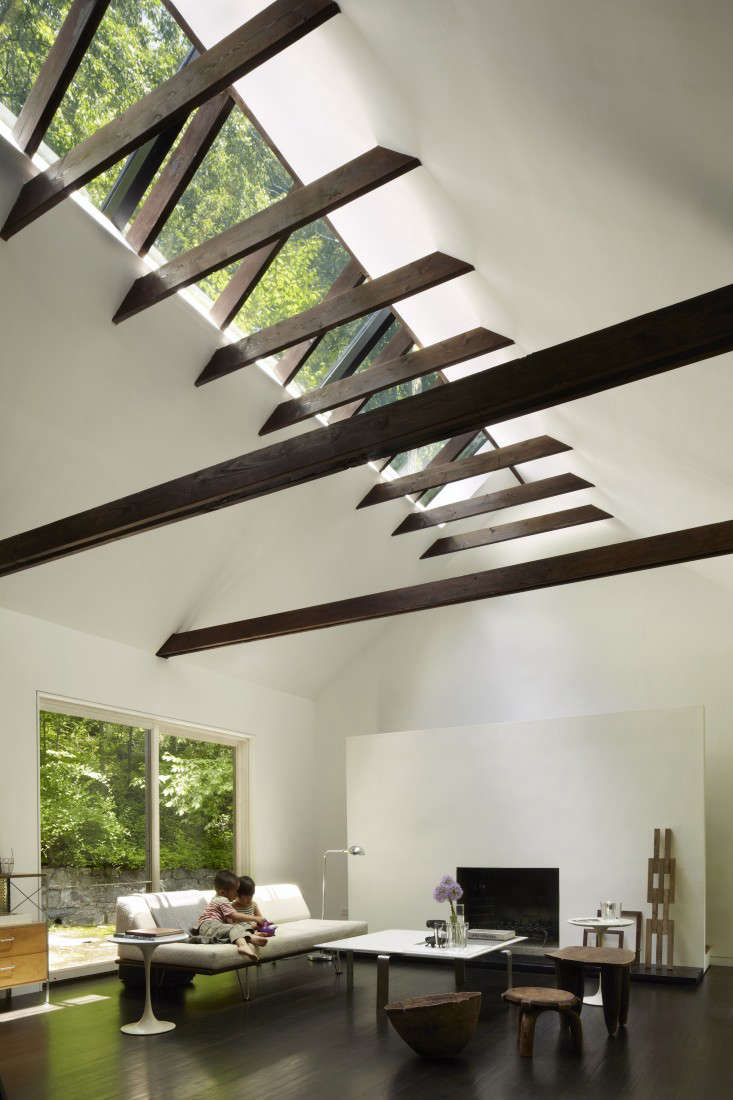 Above: The living area has a minimalist fireplace with a slate hearth and a freestanding surround that was created around the original. The sofa is the Case Study Daybed from Modernica. All of the furniture is easy to move and the couple frequently switch up the arrangement. 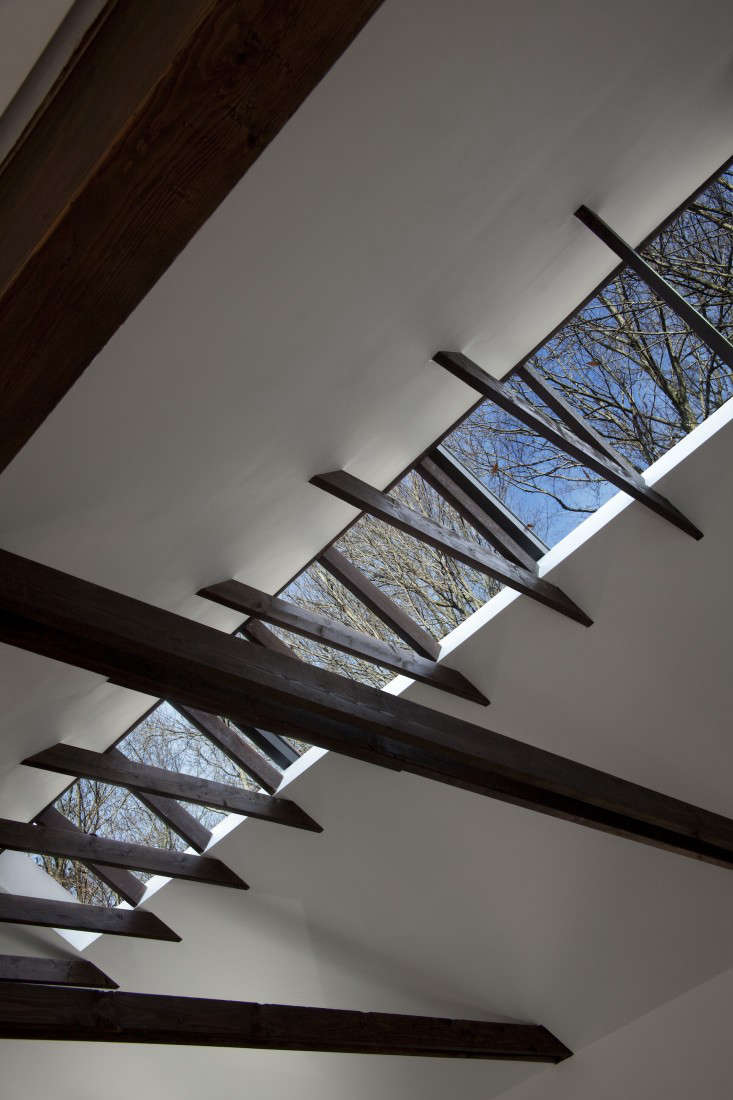 Above: The skylight, the backbone of the house, is a commercial model made by A.I.A. Industries. It was delivered in three pieces and Taka hired a local pro to install it–but before the work was done Taka got up on the roof with the crew to go over all the details. Exposed beams such as this, he says, are typical of Japanese houses: “they’re the most inexpensive way to stabilize the roof structure; I like the idea of expressing simple construction.” 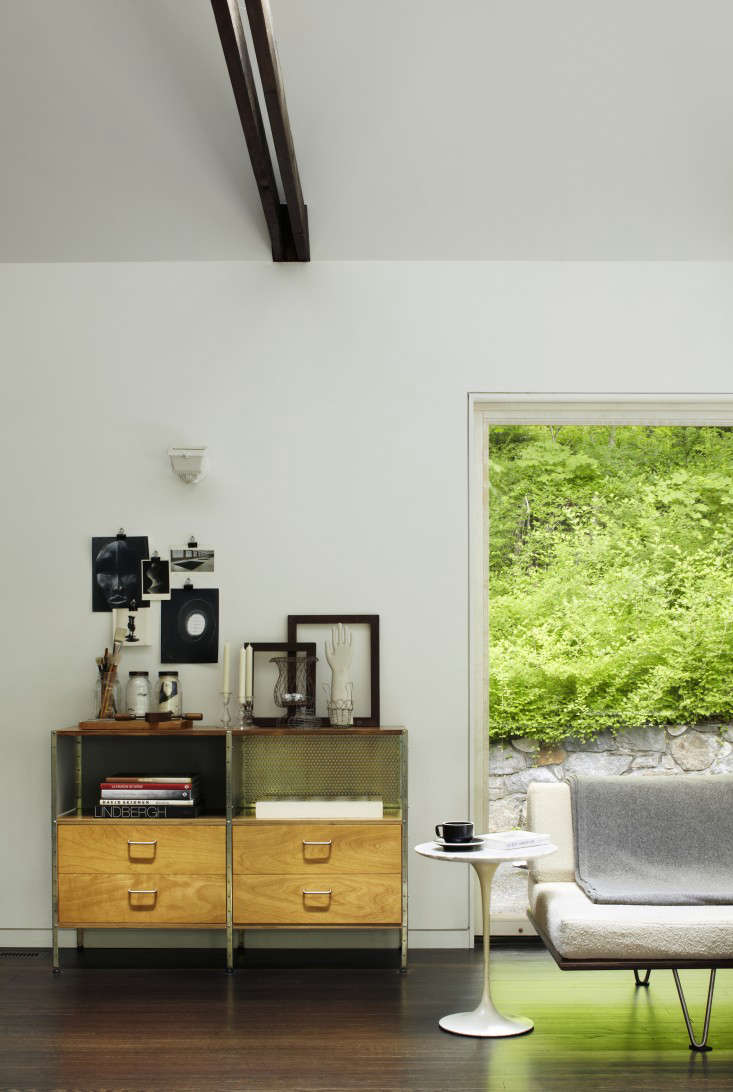 Above: Taka and Christina choose to live in a house in which every object is on view and carefully chosen. Here, a sideboard displays some of their favorite things. Placement of the windows and sliding glass doors was initially marked in the room with blue painter’s tape. 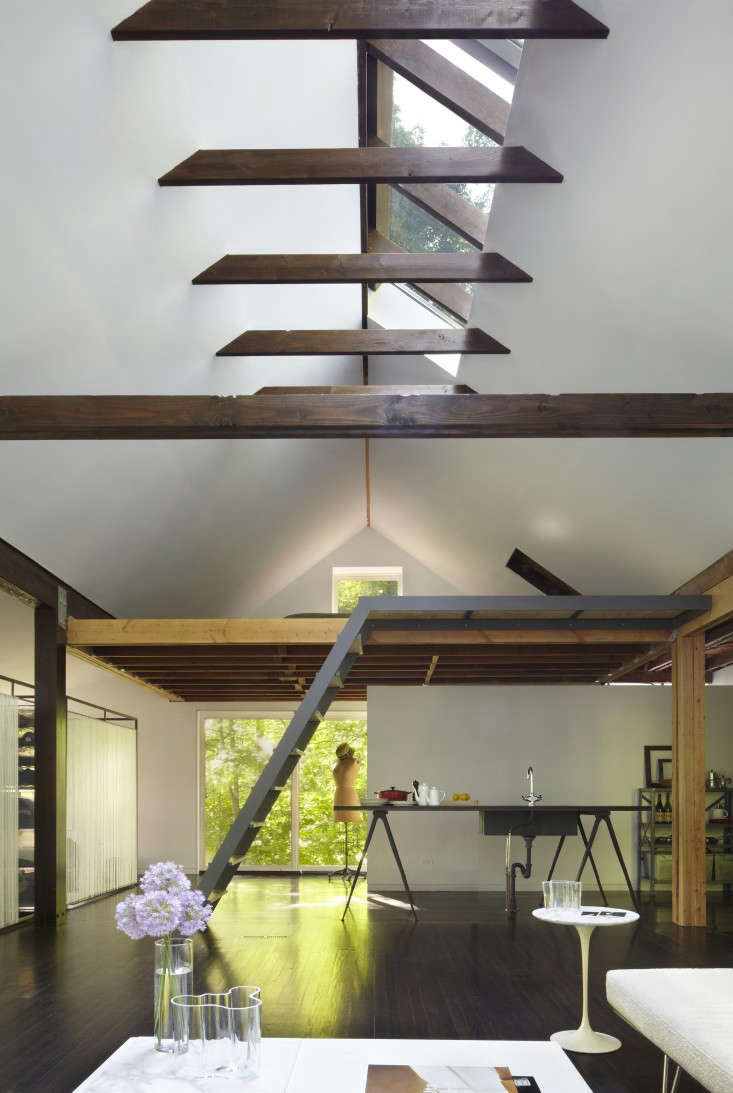 Above: The kitchen is in the back of the room (and the fridge and stove are out of view behind an 18-foot-long freestanding wall). Taka explains that he assembled the sink in a rush days before the family moved in from parts bought at Home Depot. He used metal legs painted gray, a large stainless sink that they already owned, and a plywood top stained with two coats of Benjamin Moore walnut and finished with a food-grade sealant. Steel stairs fabricated by a neighbor’s metal company from Taka’s design lead to a loft where Taka and Christina sleep. 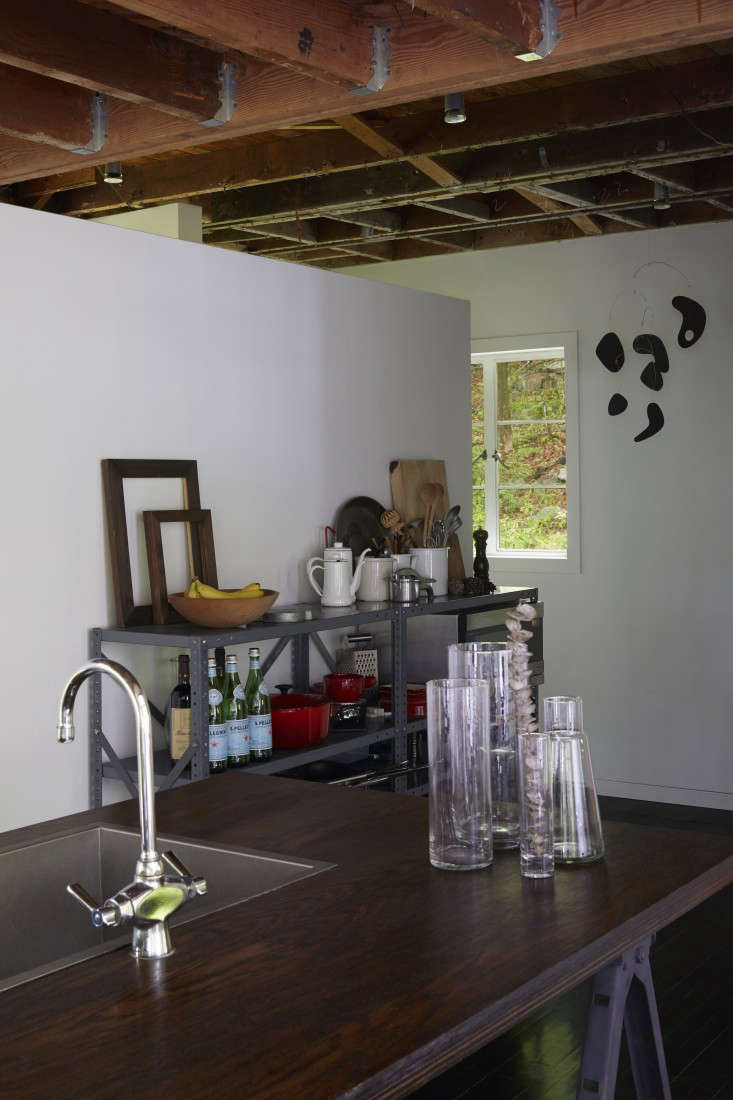 Above: Industrial metal shelves house kitchen essentials (and more pantry goods are stored behind the wall). The Chicago faucet is “the most utilitarian choice,” says Taka. “Architects love it for cost and performance.” (To learn more, see Julie’s ode to her Chicago Faucets.) 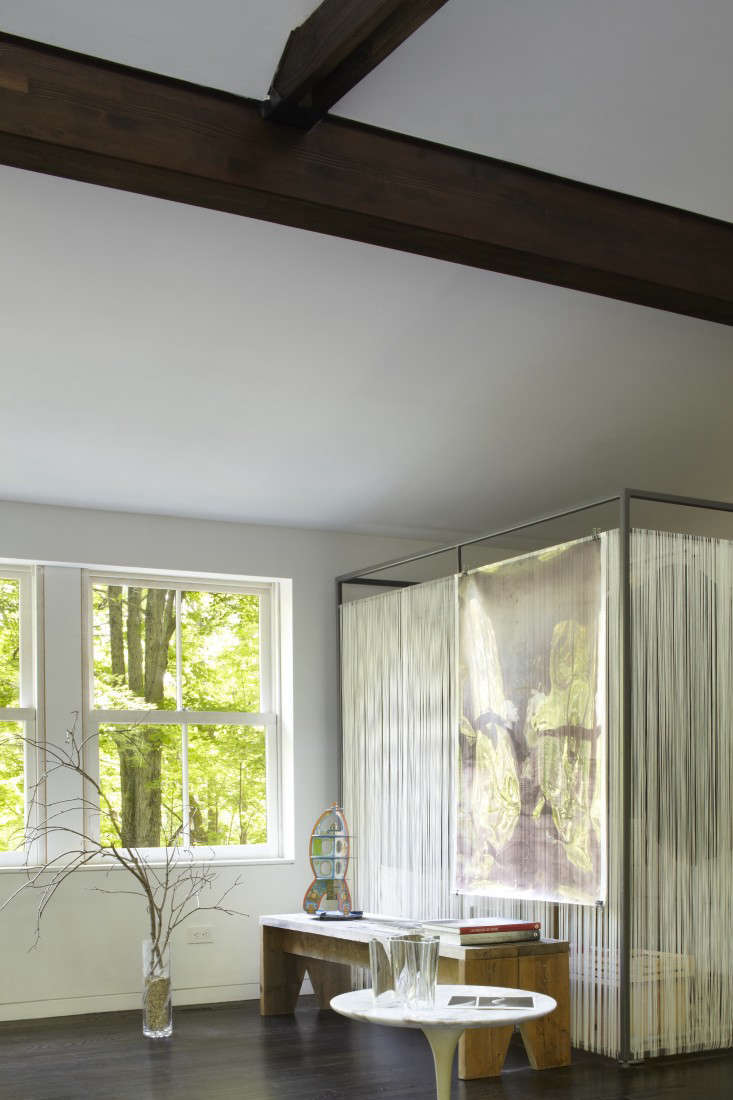 Above: A metal screen wound with string sections off a corner of the living space as a combination kids’ playroom, bedroom, closet, and art gallery. “We thought about using shoji screens, but they’re too fragile for a house with young kids,” says Taka. “Down the line, we may introduce paper inserts.” 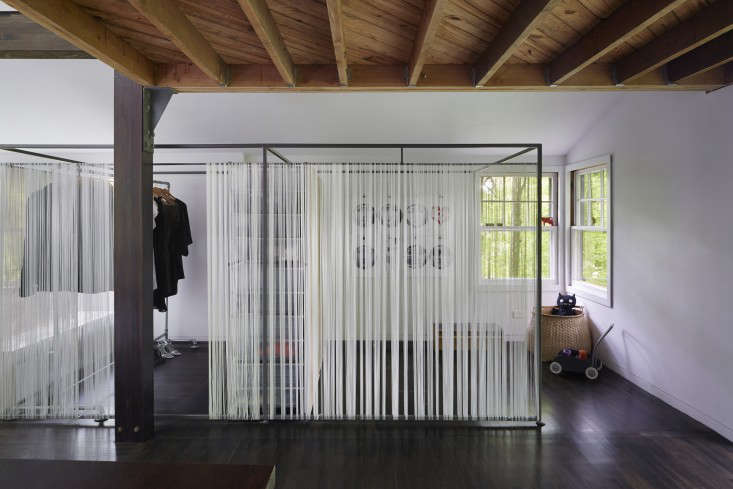 Above: The family hang their clothes on a metal rack (a small attic off the sleeping loft comes in very handy for storing out-of-season wear as well as the kids’ bedding). The cabin’s original ceiling is left exposed in this section of the room. 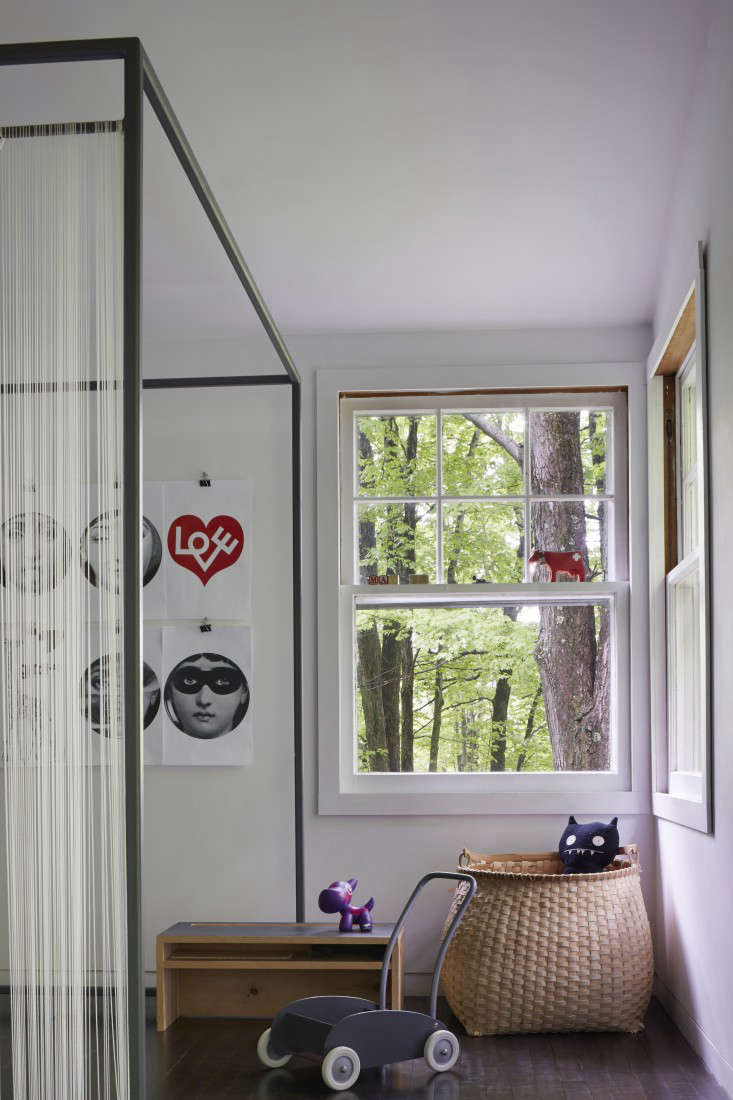 Above: The kids are encouraged to play with one toy at a time; the bulk of their things are stashed in a straw basket. 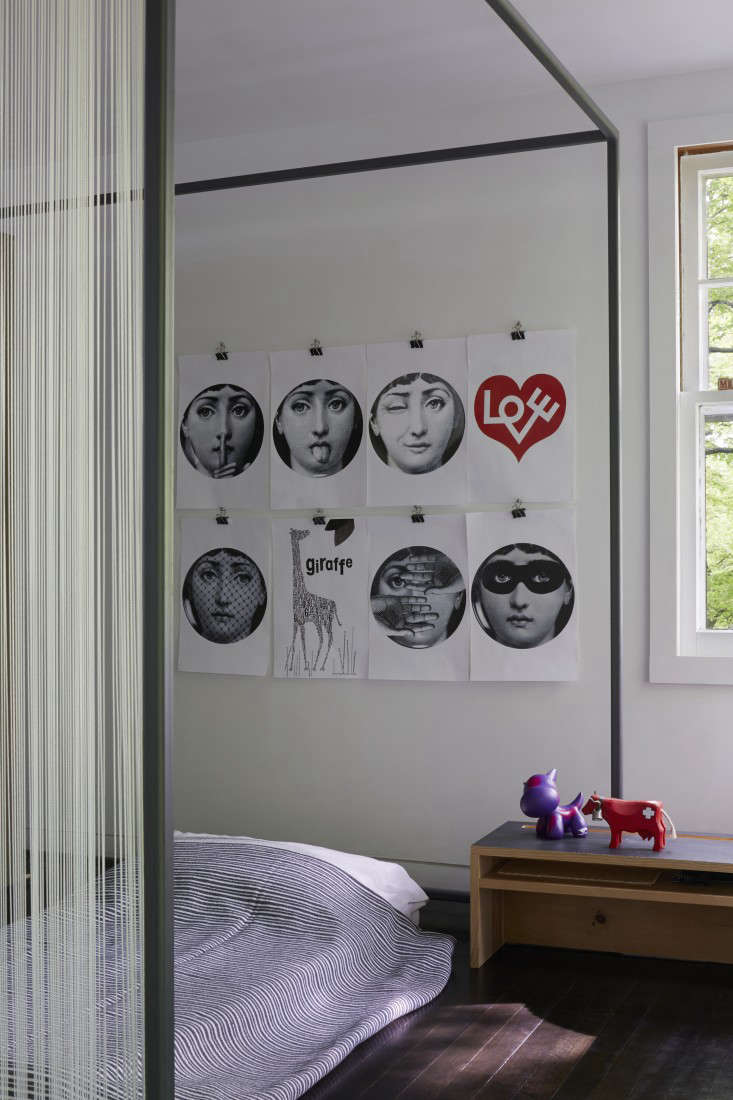 Above: Taka has his kids pick out images from art books to hang in the gallery. “They show me what they like and I scan the pages and print them,” he says. “We use metal clips and pushpins.” Every night, Taka and Christina toss down the kids’ rolled-up futons and bedding from the sleeping loft and the kids make their own beds; in the morning, the kids roll up their beds for storage. 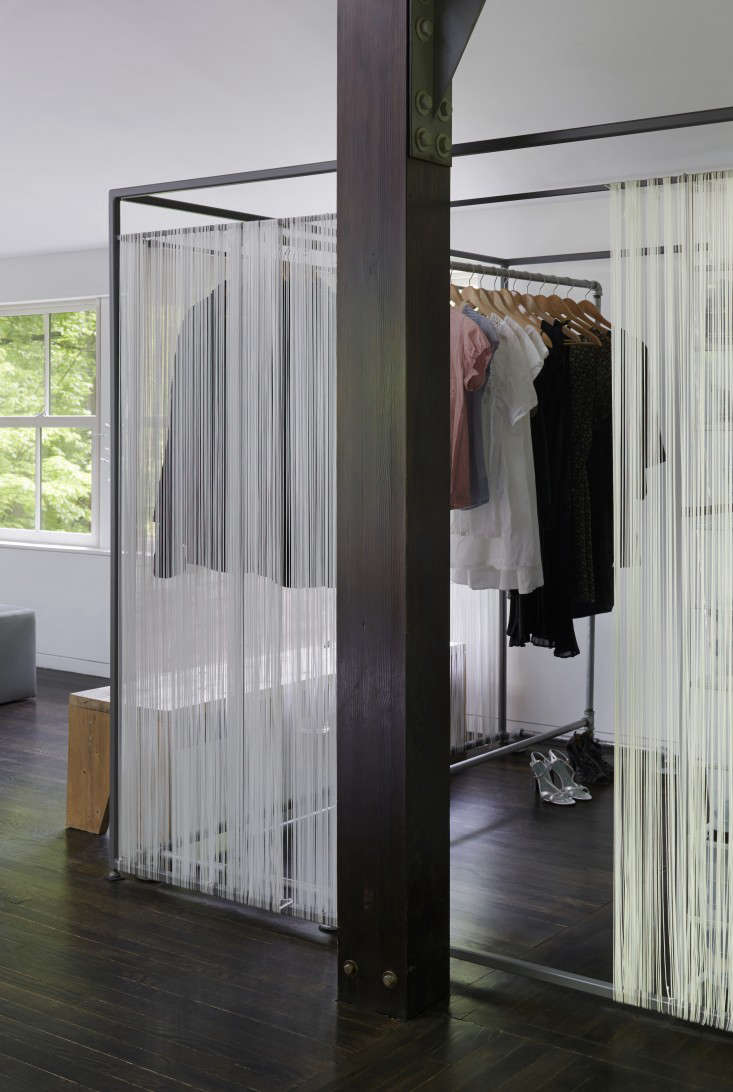 Above: “We used white nylon string to create the screen,” says Taka. “Christina wound it around and around the frame.” Taka installed the house’s new Douglas Fir beams himself. 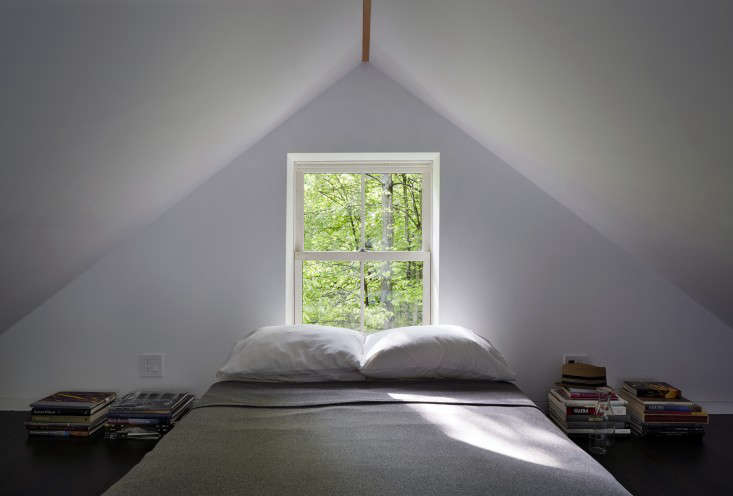 Above: Taka and Christina sleep in the loft on a futon purchased on the Lower East Side. The loft, like the rest of the house, has no window shades–”that’s the beauty of living upstate, nobody sees in,” says Taka. “Around 5:30 in the morning light pours in and we wake up. It’s a beautiful soft glow. It’s really quiet because the kids are still sleeping; we love that time.” No bedside lights? “If we want to read, we bring a light and plug it in. We also use our laptops.” The family has no TV–but they watch movies and cartoons on their computers. 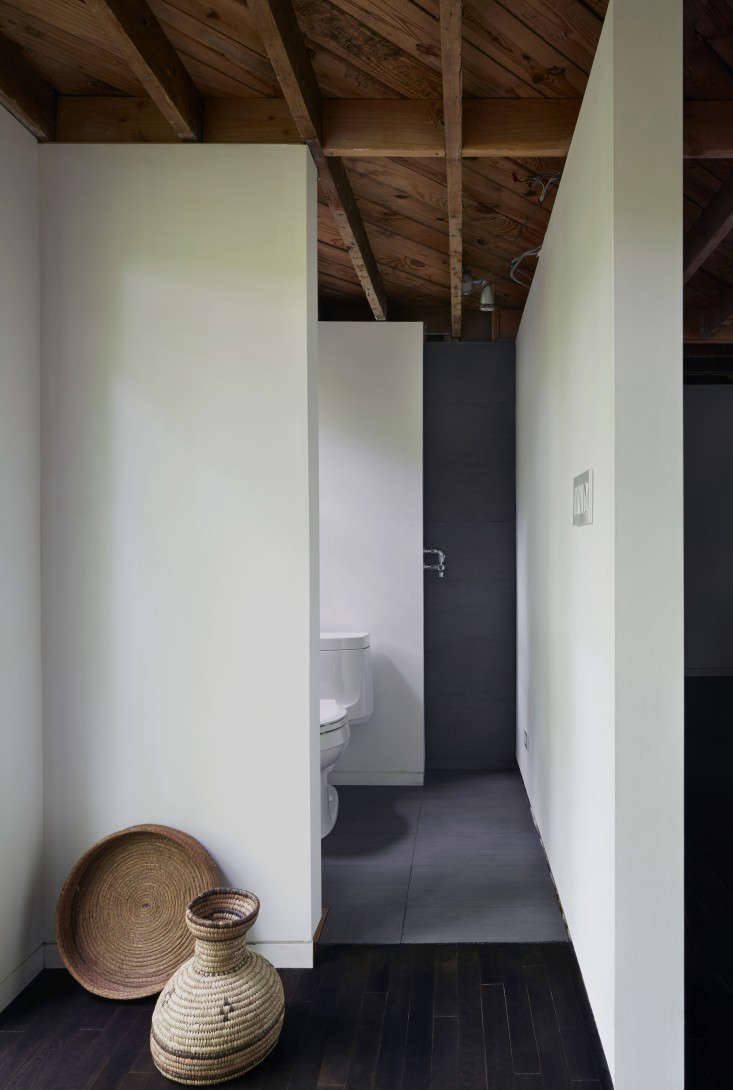 Above: The 18-foot-long freestanding wall behind the kitchen conceals the bathroom (in lieu of a door, there’s a curtain–and installing a sliding door is on Taka’s To Do list). 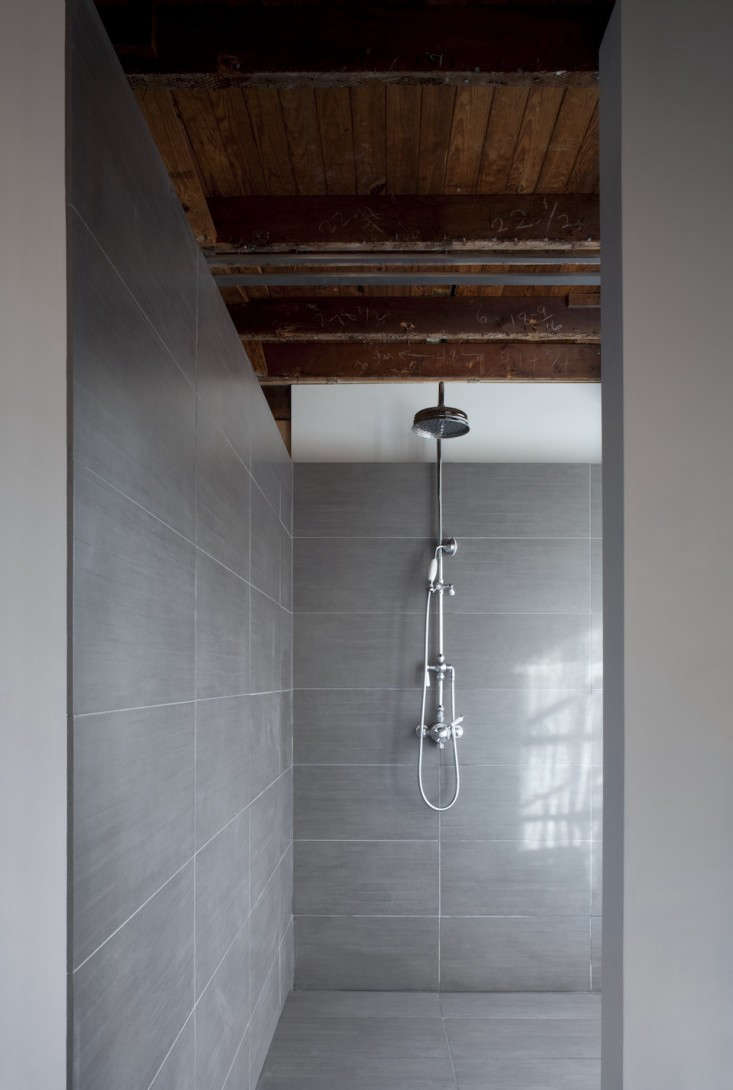 Above: The shower is sheathed with Italian gray porcelain tiles. Notations on the ceiling beams were a discovery made during construction–”we love that detail,” says Taka. 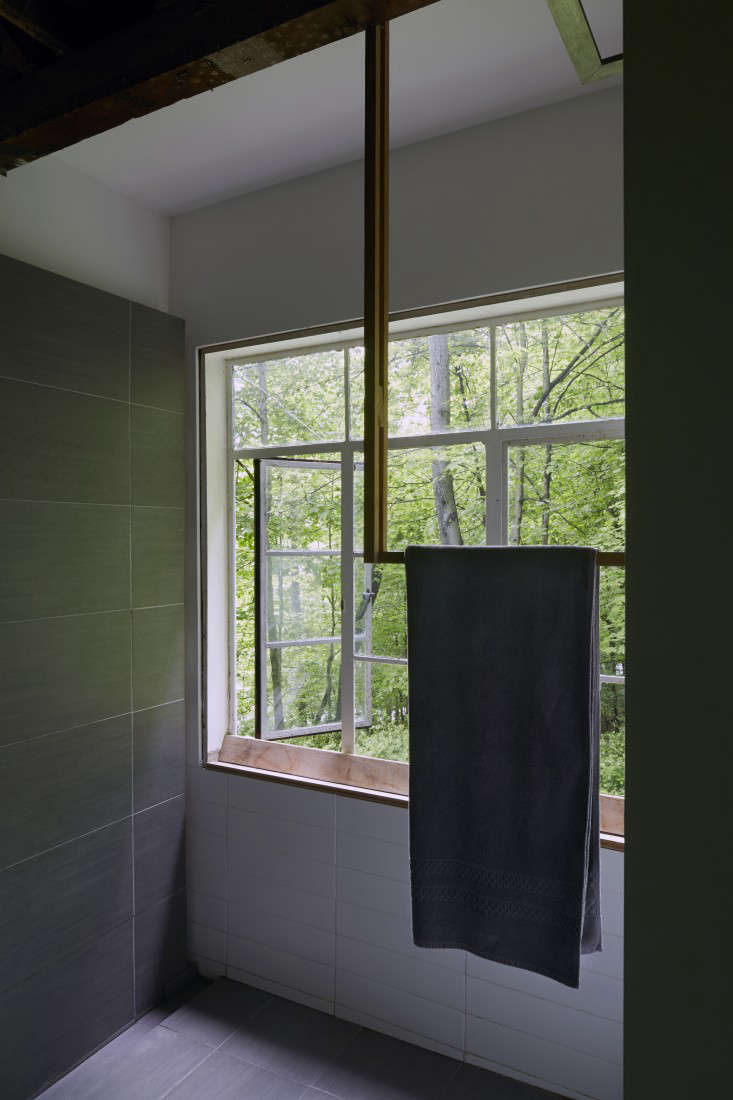 Above: Taka and Christina designed a suspended towel rack. 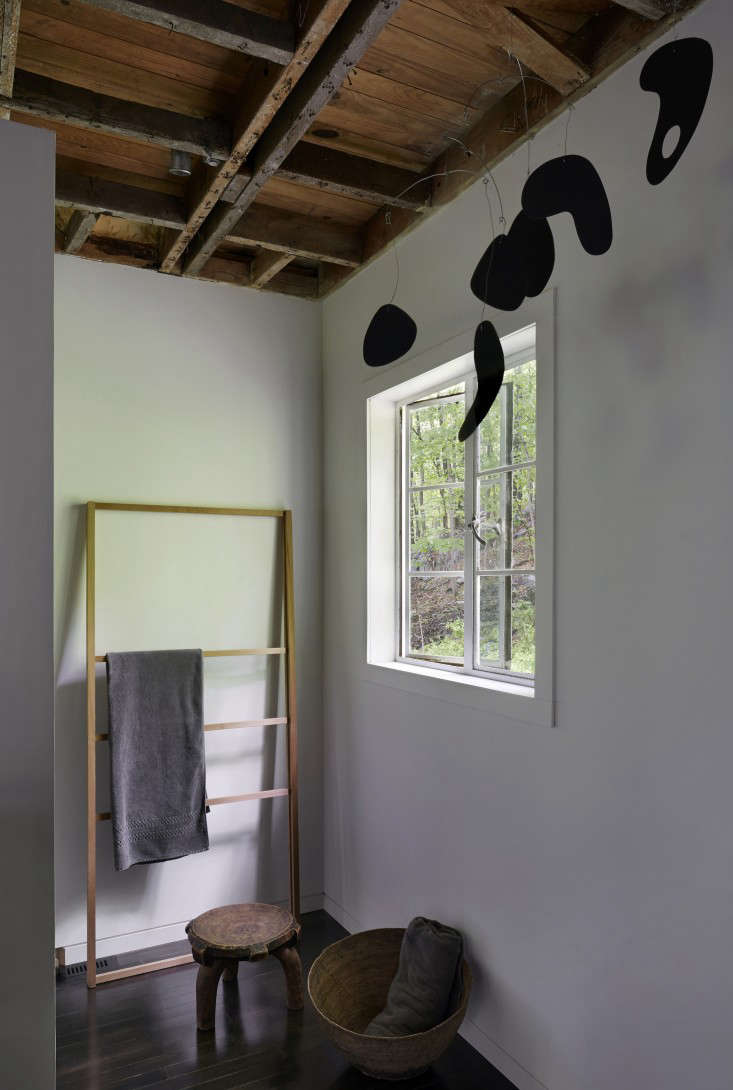 Above: A second custom towel bar leans on a wall. The Calder-esque mobile is cardboard and wire, a collaboration between Taka and the kids. 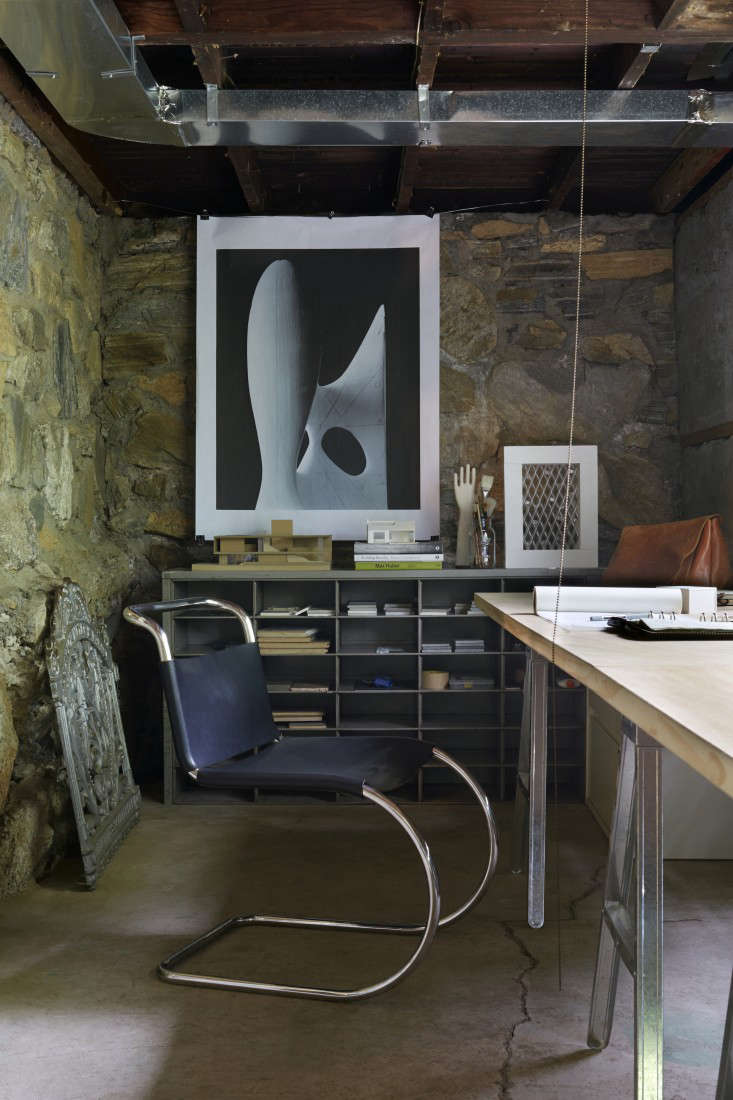 Above: Christina’s office is in a section of the basement that opens to the garden. She runs her own interior design firm, Takatina, and works with Taka on jobs that require an architect. The table is made from a hollow-core door–”the cheapest you can find at Home Depot,” says Taka–and metal sawhorse legs. The desk chair, the Mies van der Rohe MR Chair from Knoll, was a bigger splurge. 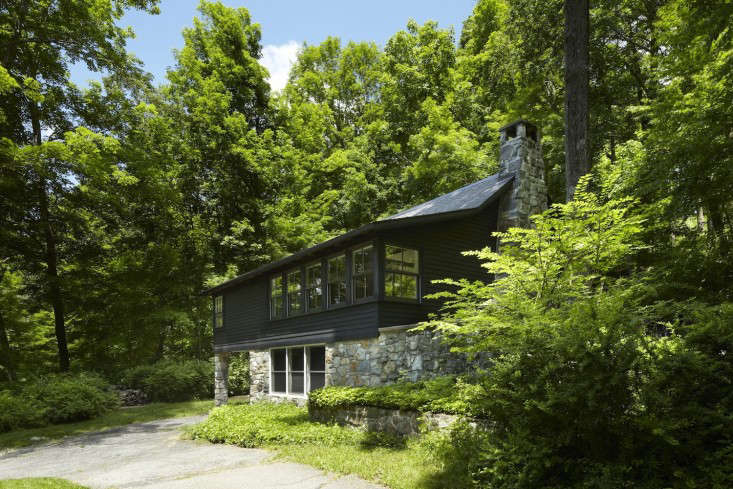 Above: Living in a one-room house is ideal for now, while the kids are young, but part of the plan in purchasing a small place is that someday the family will build an addition. Stay tuned. 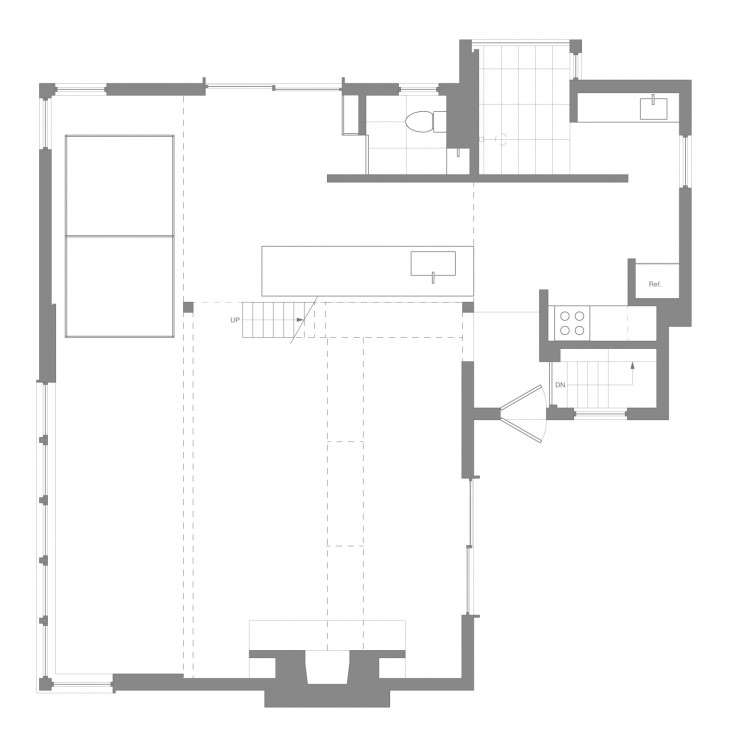 Above: Creating an open floor plan involved removing a lot of walls, and consulting an engineer to make sure it was feasible and affordable. The main floor is 1,100 square feet and the sleeping loft is 200 square feet.

To see other recent remodels, have a look at our Rehab Diary posts. And if you like Japanese design, peruse our Autumn in Japan issue. A nice getaway in Upstate New York?  Have a look at Table on Ten’s Room with a View on Gardenista.