When an art-collecting friend approached designer Alexandra Loew to reimagine his 900-square-foot NYC apartment, he had run out of places to display his artwork, which includes works by Picasso, Le Corbusier, and Andres Serrano and the space was in disarray. “It really needed an edit above all else,” she said.

Loew looked to the work of 19th-century English architect Sir John Soane for inspiration in organizing the apartment; particularly “the ways he transformed his own home into a gallery for his ever-growing collections, and devised architectural methods to create apertures into worlds-within-worlds inside small labyrinthine spaces.”

Loew took a three-part approach, culling extraneous pieces from the collection, devising a creative system for displaying the remaining works in the apartment, and identifying holes in the portfolio and bringing in new pieces to fill the gaps. The finished space still has the drama of a crazed collector’s lair—but with the elements arranged in an orderly fashion. Join us for a tour.

Photography by Simon Upton courtesy of Alexandra Loew, except where noted. 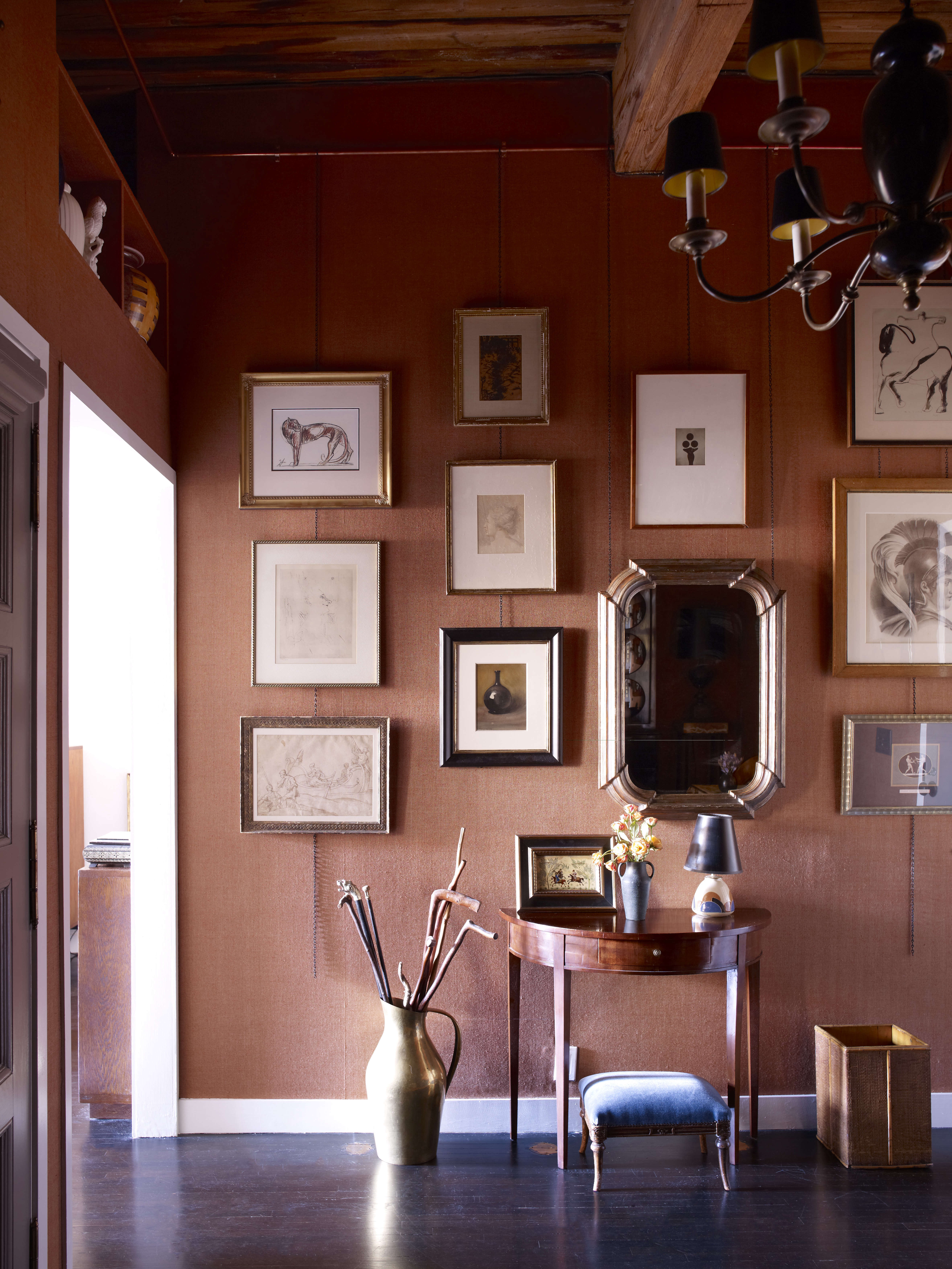 Above: The apartment is located in a former brewery dating from 1890. “In the 1990s, my client befriended several New York flea market dealers who taught him to be a resourceful and informed collector,” Loew says. 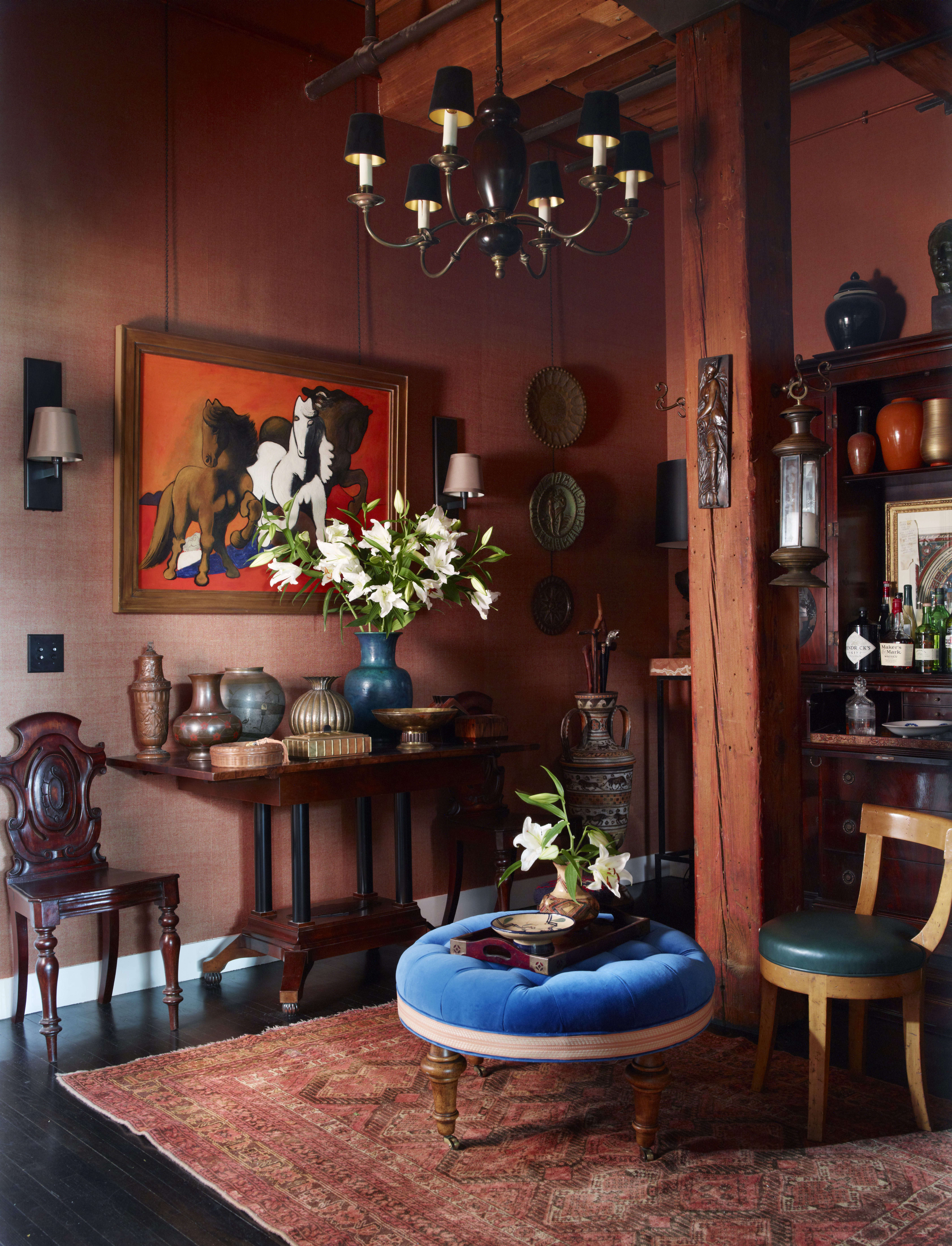 Above: The 10-by-15-foot foyer is clad in a coral silk wall covering. So as to not damage the silk and because her client’s collection is always evolving, Loew designed an artwork display system using 1/2-inch copper tubing as a “picture rail” with steel chains attached via black zip-ties. “It’s rather simple to reposition or change out the artwork that hangs from it,” said Loew.  Photograph by William Waldron.

A network of 125-year-old wood beams and joists (along with the more recently installed sprinklers) dictates the route of the picture rails along the 12-foot-high walls. 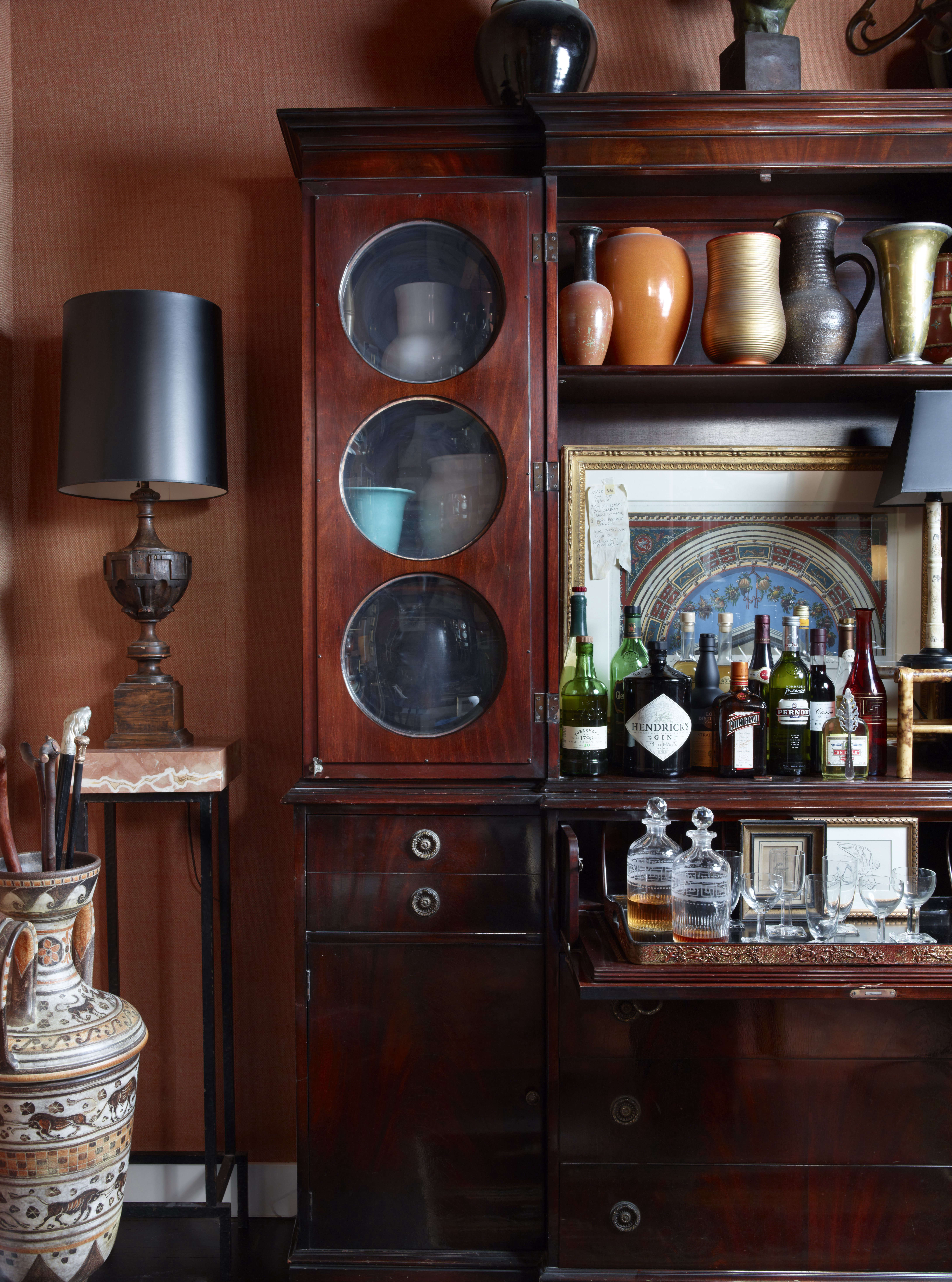 Above: “There is an element of theater in the moodiness, density, and decadence of this series of small spaces that unfold and delight in every corner,” said Loew. 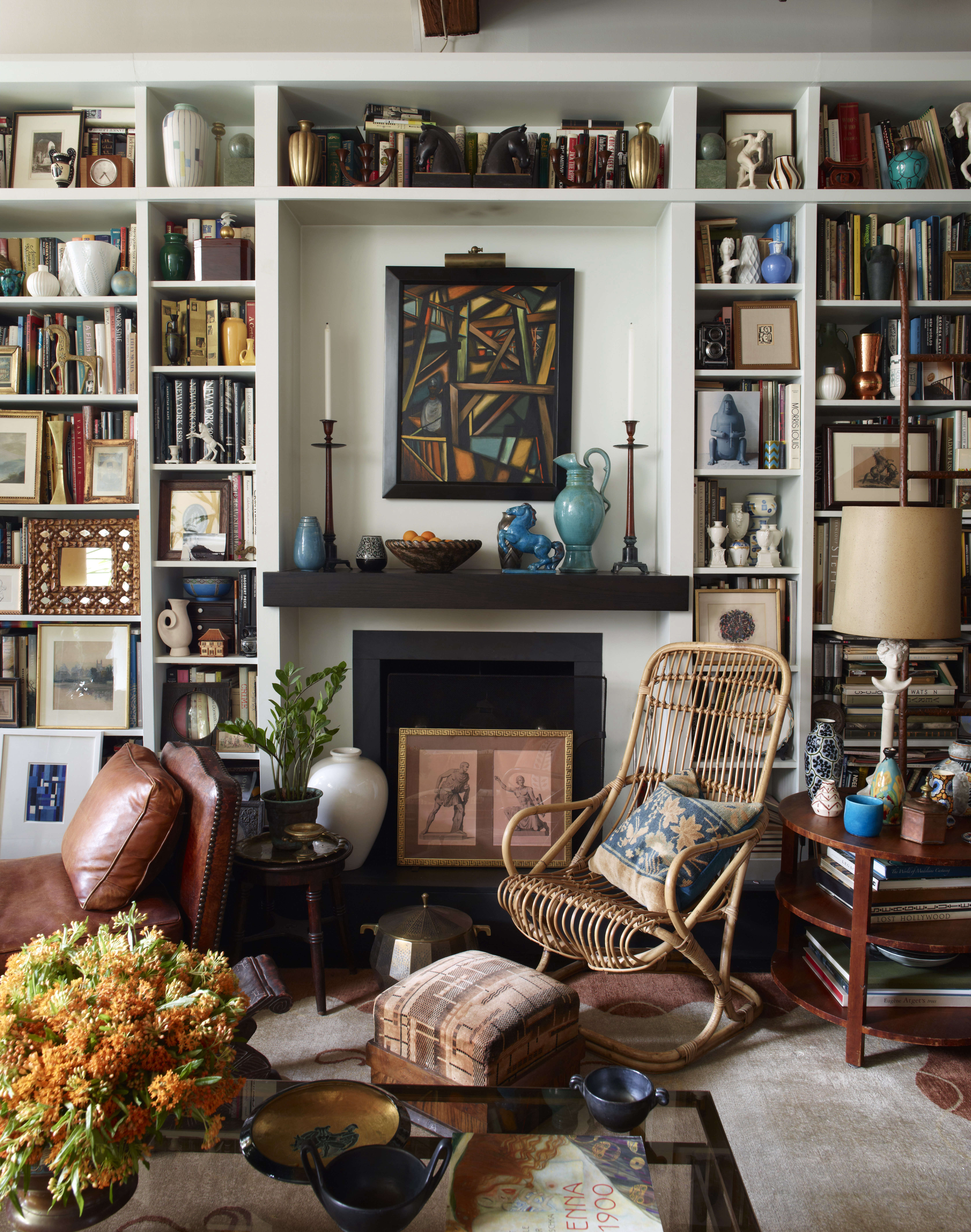 Above: In addition to paintings, drawings, and etchings, the apartment has pottery, sculpture, and period furniture on display. The lamp to the right of the fireplace is a plaster design by Alberto Giacometti. The wall color is by Donald Kaufman. 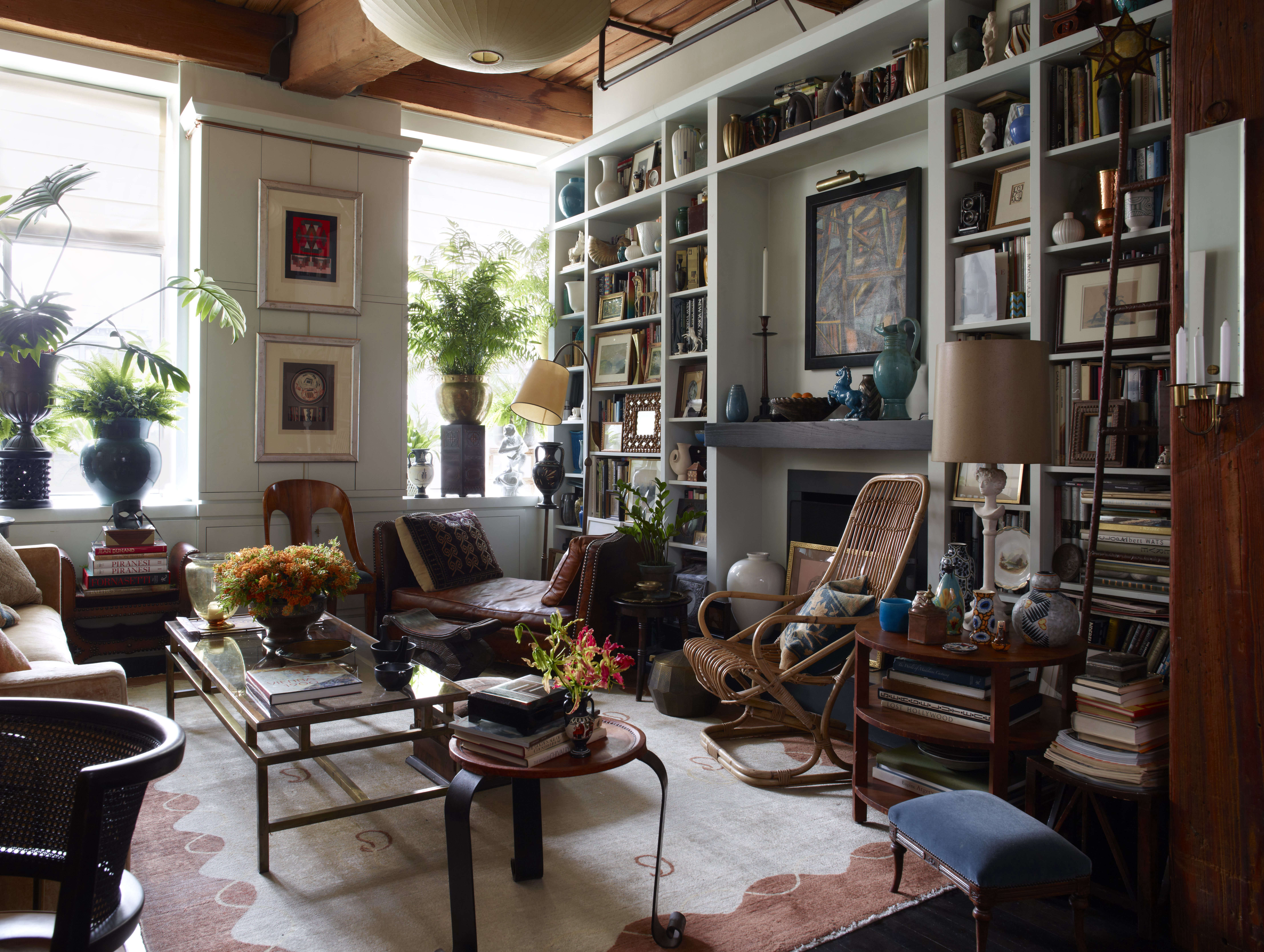 Above: In the living room, a Persian rug from Nazmiyal with a paisley motif “grounds the contents of the room with an artful and well-traveled vibe.” An early prototype of a George Nelson bubble lamp hangs in the center of the room (it’s the only American midcentury piece that Loew and her client retained after the culling process). 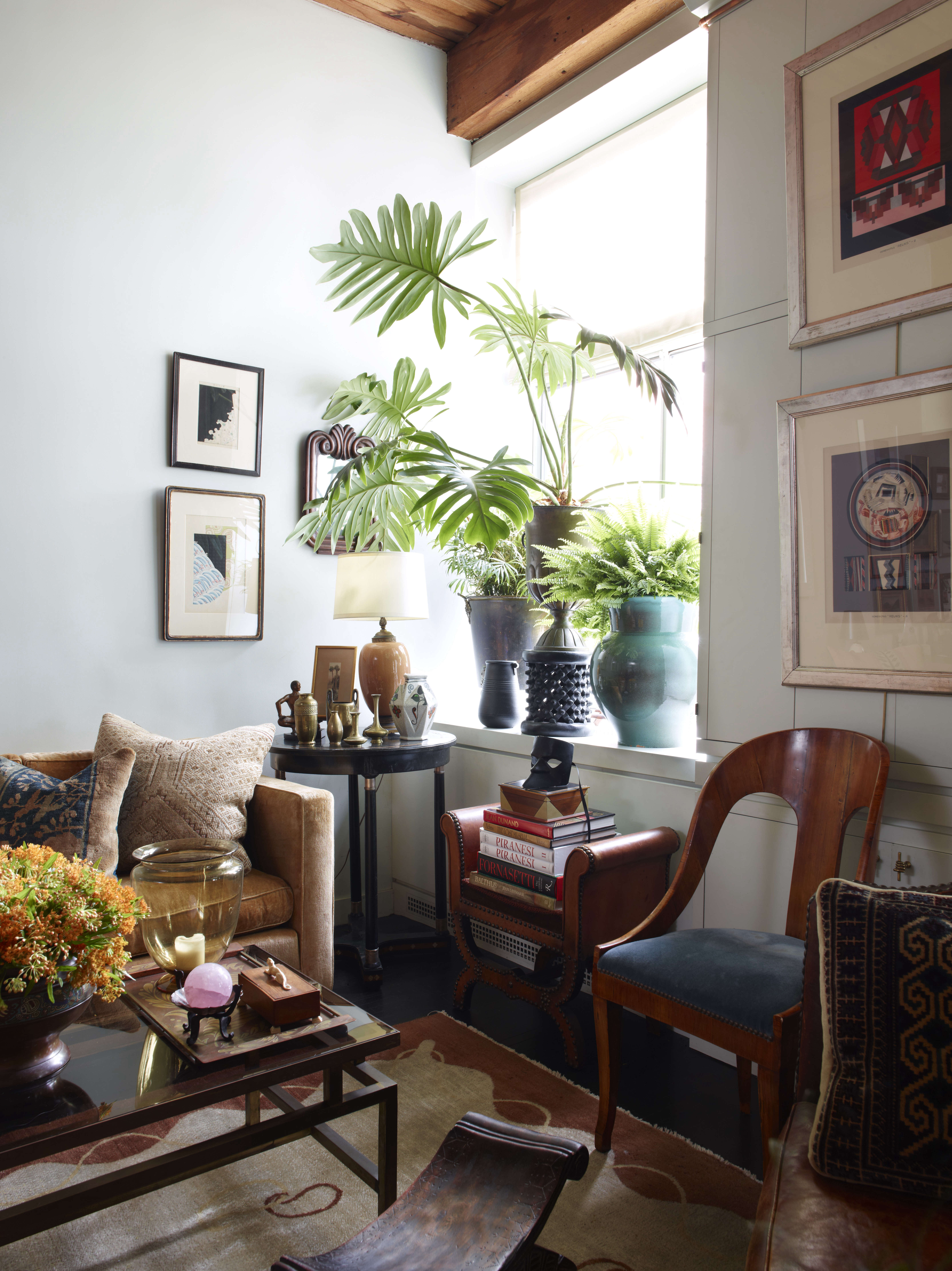 Above: Loew and her client share the rarefied tastes of global collectors; they have taken several buying trips together to France and Belgium. 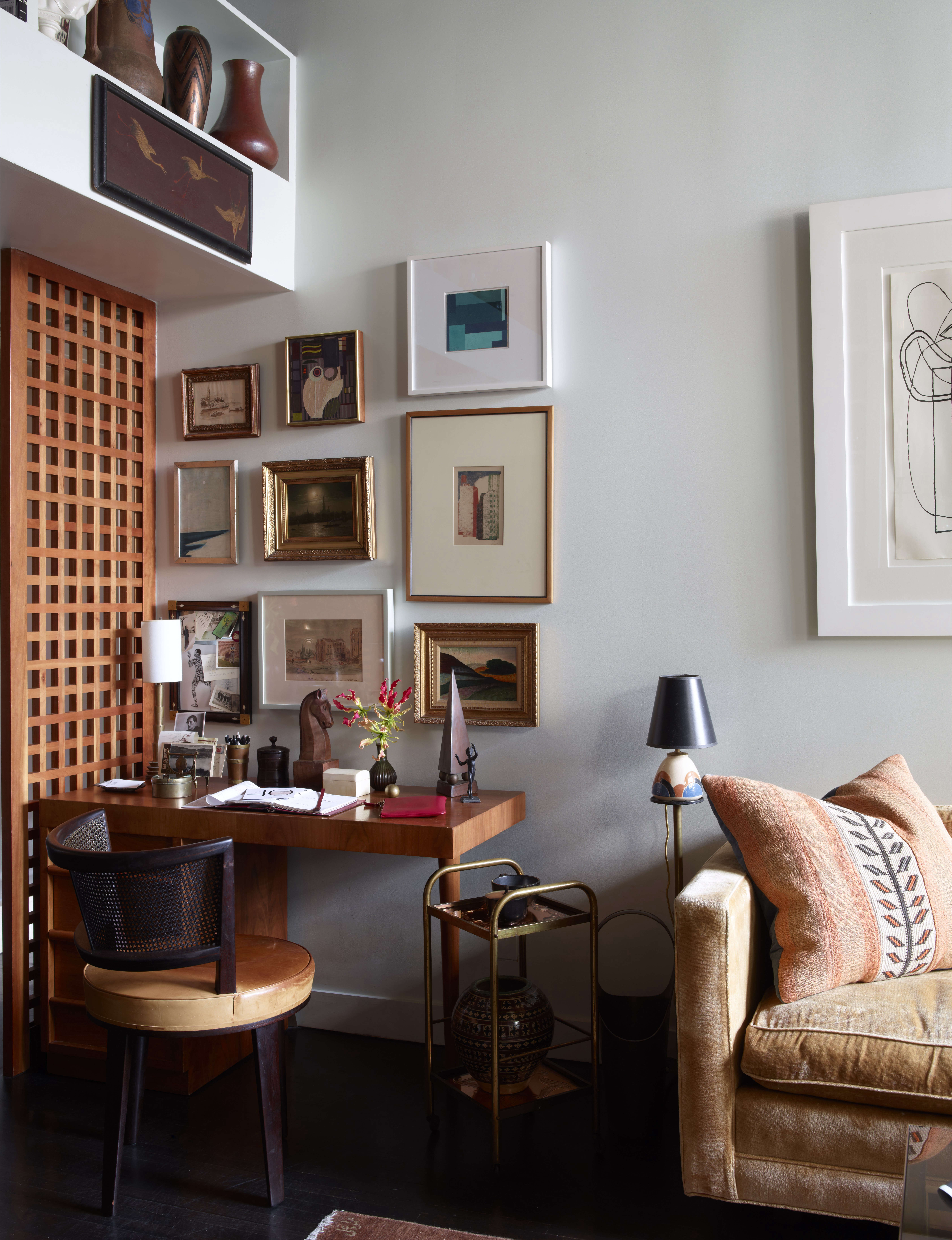 Above: Loew chose “subdued, muddy colors” for vintage pillows and Ikat patterns to complement the artwork—”it was our color direction for the entire space overall,” she said. 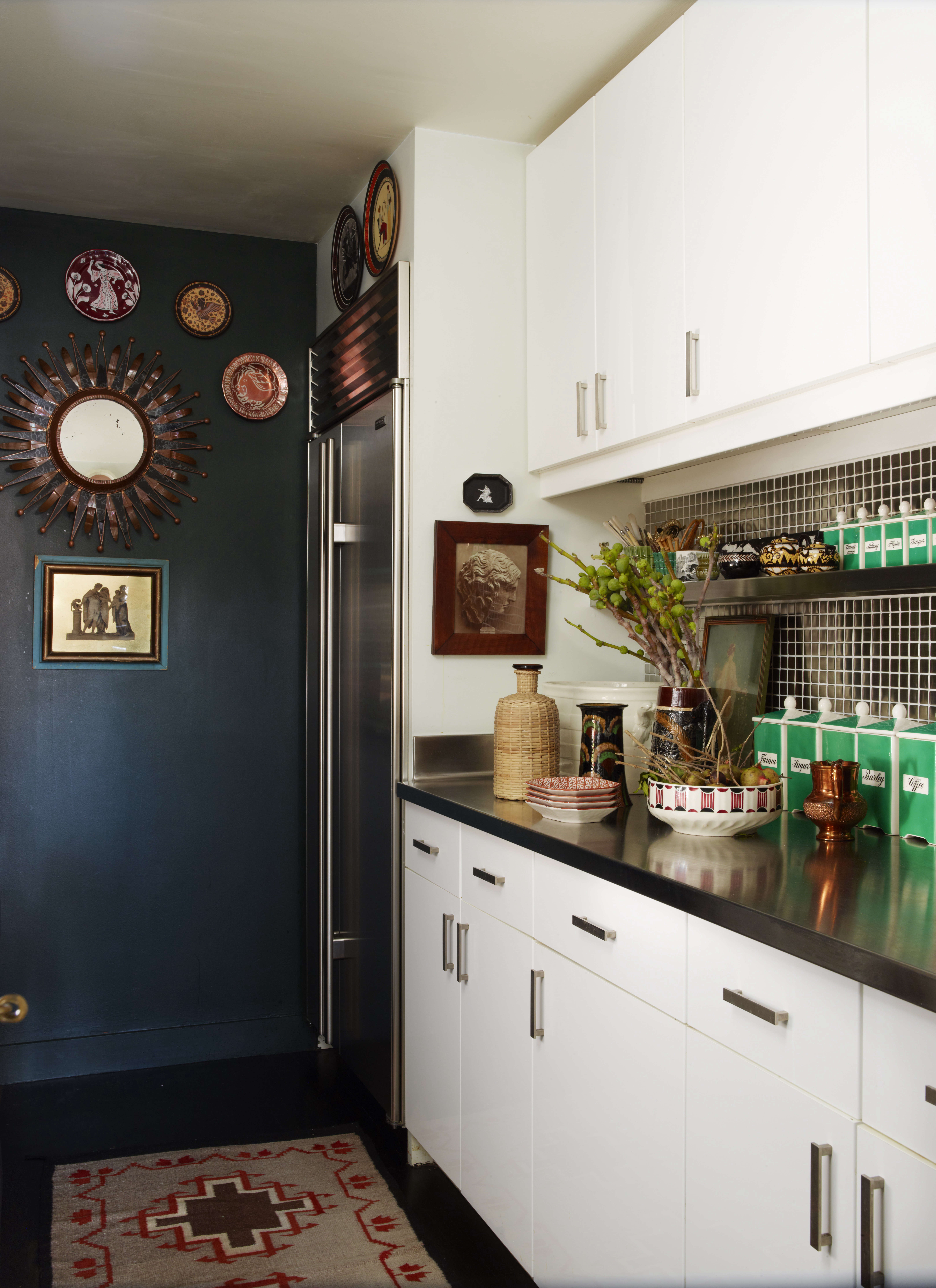 Above: The kitchen has a dark blue accent wall (in a Farrow & Ball hue) with dinanderie artwork and a black mosaic tile backsplash. 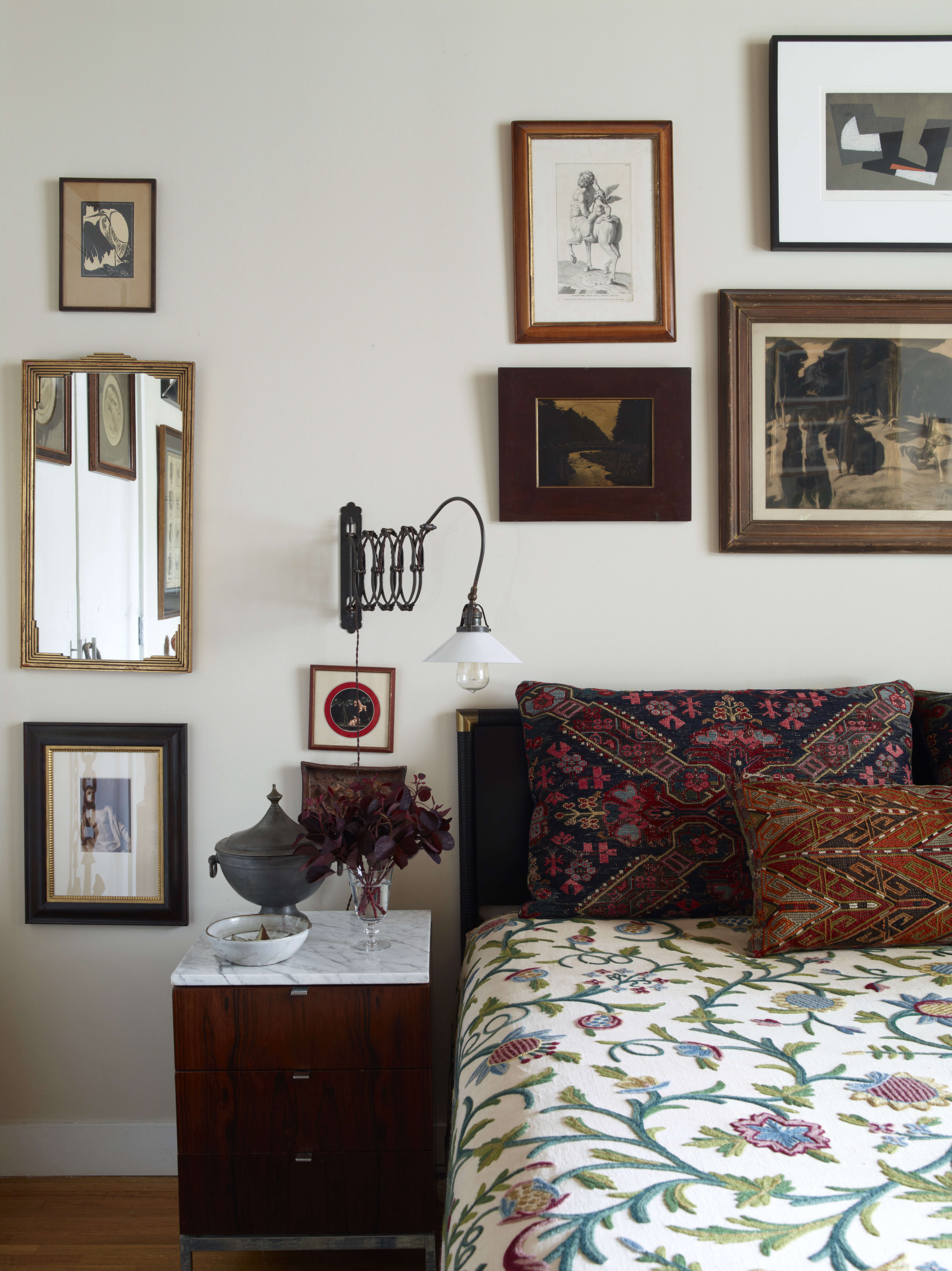 Above: A pair of marble-topped bedside tables flanks the bed. 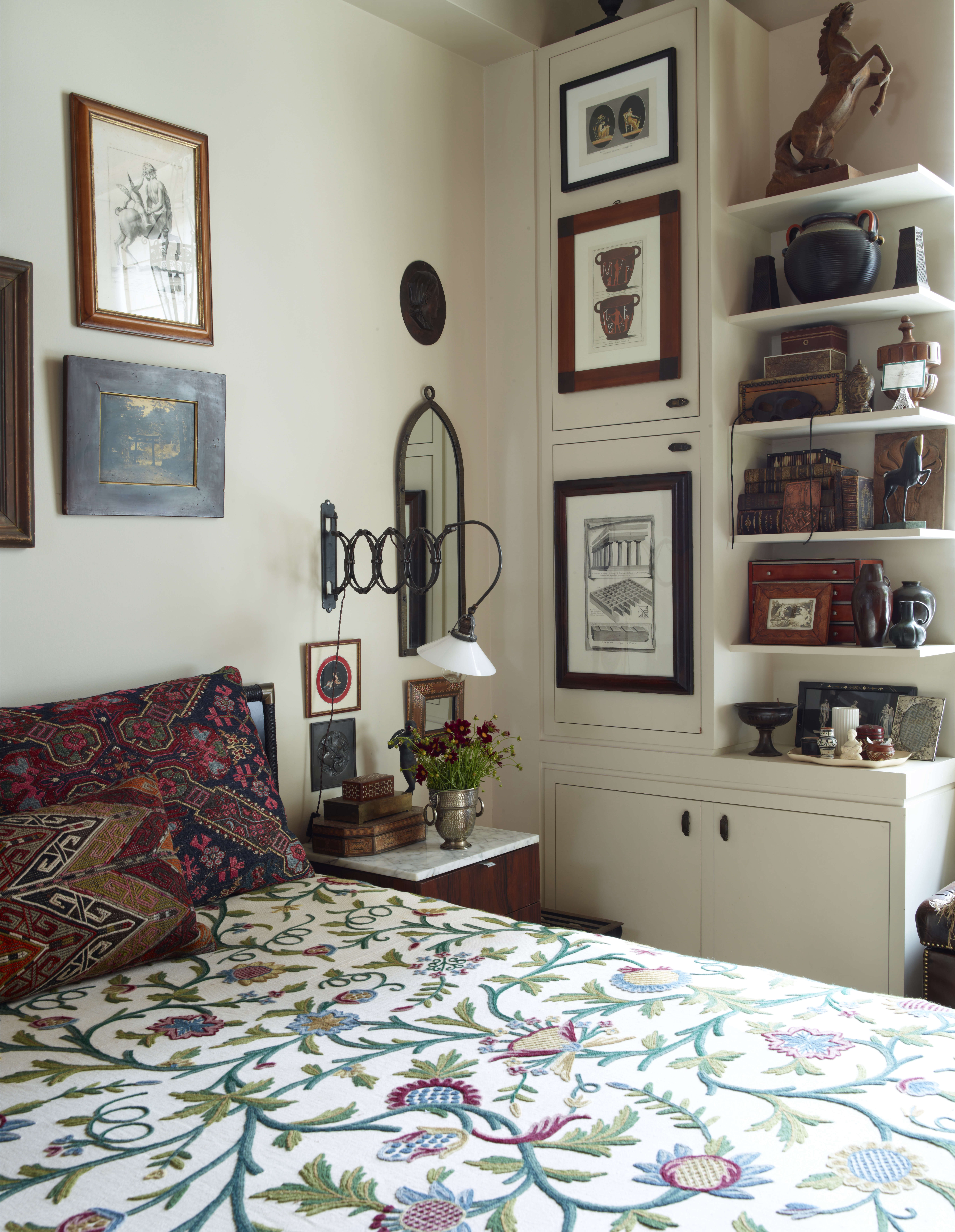 Above: The crewelwork bedspread was purchased at a thrift shop by the client. It works in the space, notes Loew, because the artwork in the bedroom is largely monochromatic. 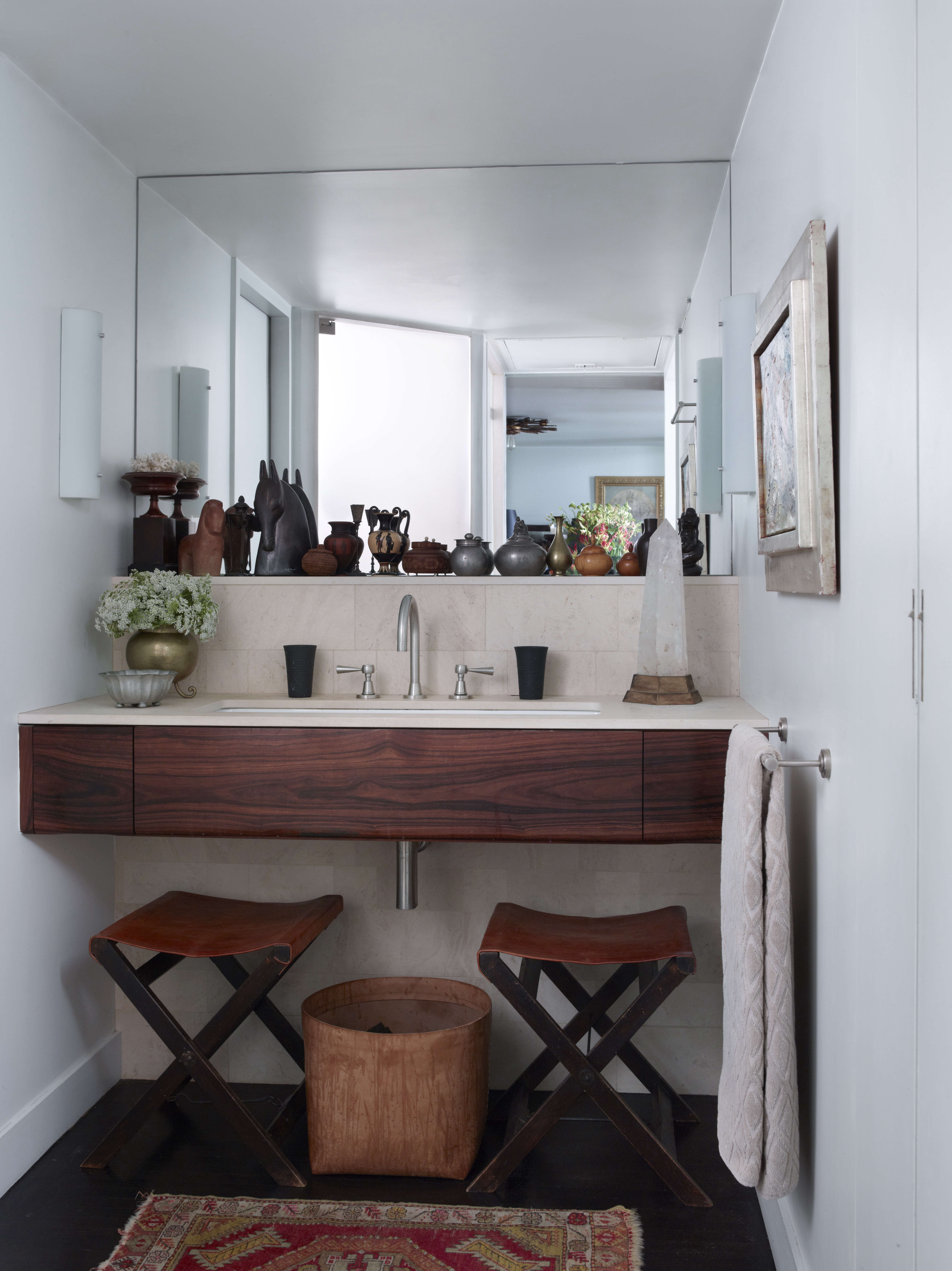 Above: For the bathroom, Loew was inspired by the portfolio of French interior designer Jean Michel Frank, plus a bathroom that architect Peter Marino designed for Giorgio Armani in the 1990s. The vanity is made of rosewood with a French limestone top. “The bathroom does not feel like a separate wet space,” said Loew. “Its contents bear the same collector’s spirit as all the other rooms in the house.”

For more inspiration on art in the home, see: