Architects Lisa Chadbourne and Daren Doss of Seattle firm Chadbourne + Doss–members of the Remodelista Architect/Designer Directory–were searching for coastal property on which to build when they fell for Alderbrook Station, a century-old abandoned fish packing plant. A relic of Astoria, Oregon’s salmon industry, the compound is a registered historic marine complex consisting of three primary structures built on piles along the Columbia River. The couple use the 15,000 square-foot three-story warehouse, the Netshed, as an event space for parties and exhibitions; they rent out the Bunkhouse, a 450-square-foot cabin; and they transformed the 2,500 square-foot Boathouse into their own vacation getaway. Join us for a house tour and learn how the architects kept the original river spirit of the building intact. 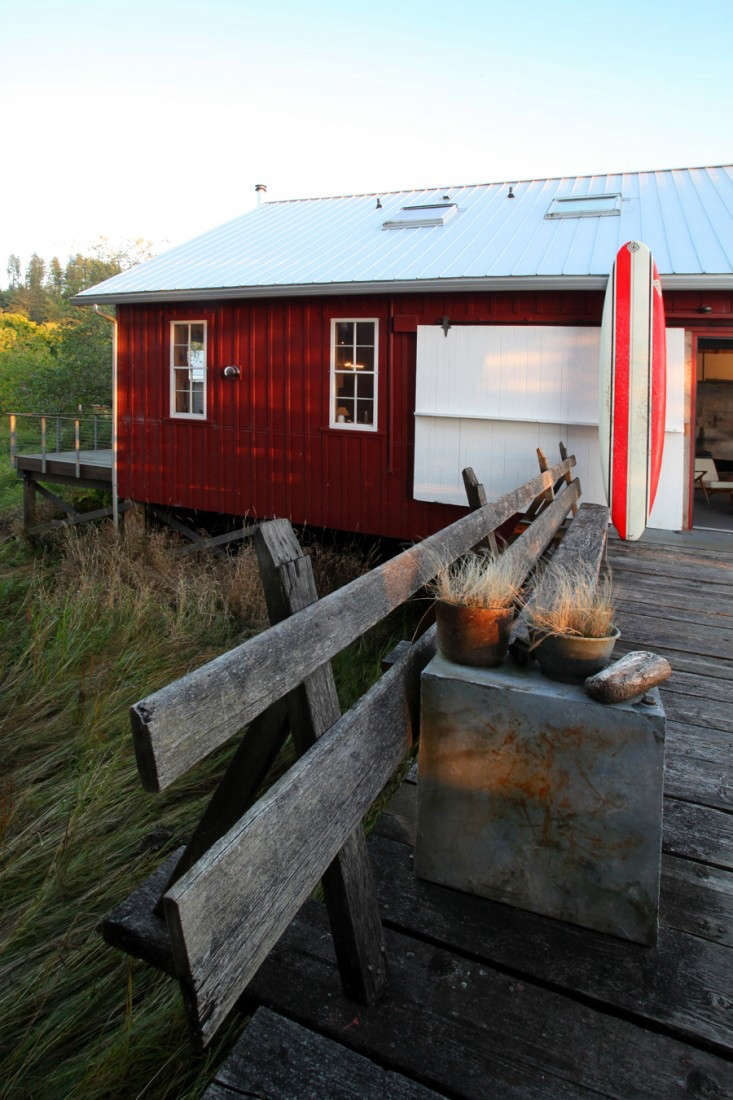 Above: The exterior of the historic building had to remain intact, but additions were allowed. The architects introduced new siding, windows, doors, skylights, a deck and ramp, and a standing seam metal roof. Go to Hardscaping 101: Standing Seam Metal Roofs to learn about the favored roofing material of Remodelista Architect/Designer Directory members. 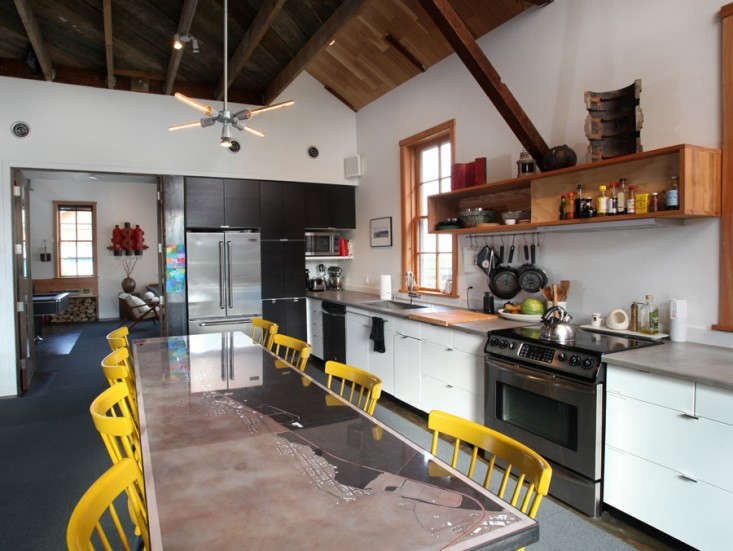 Above: The boathouse has a long kitchen with soaring ceilings. Cheerful yellow chairs surround a table topped with an artist’s rendition of the Columbia River protected by glass. 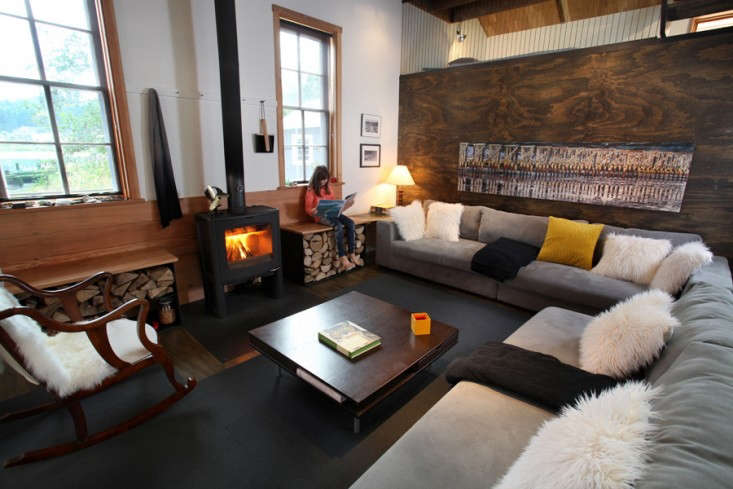 Above: The floors and walls are stained plywood; the highlighted graining references the patterns of a flowing river. “On the interior we were concerned with using materials and finishes that are suitable to the industrial context, but that also serve to evoke the mood of the place,” Chadbourne says. Douglas Fir planks from old docks on the property were put to use as window and door trims and built-in benches with shelves for firewood. 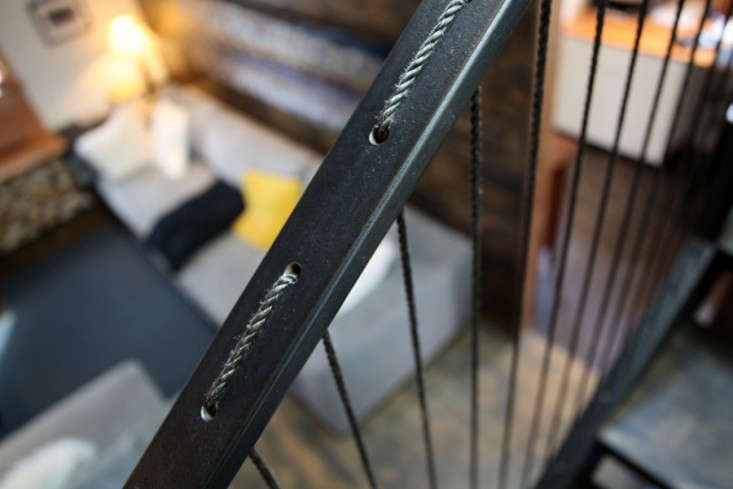 Above: Tarred seine rope (commonly used for seine fishing nets) has been laced through the blackened-steel stair railing to create a guardrail. 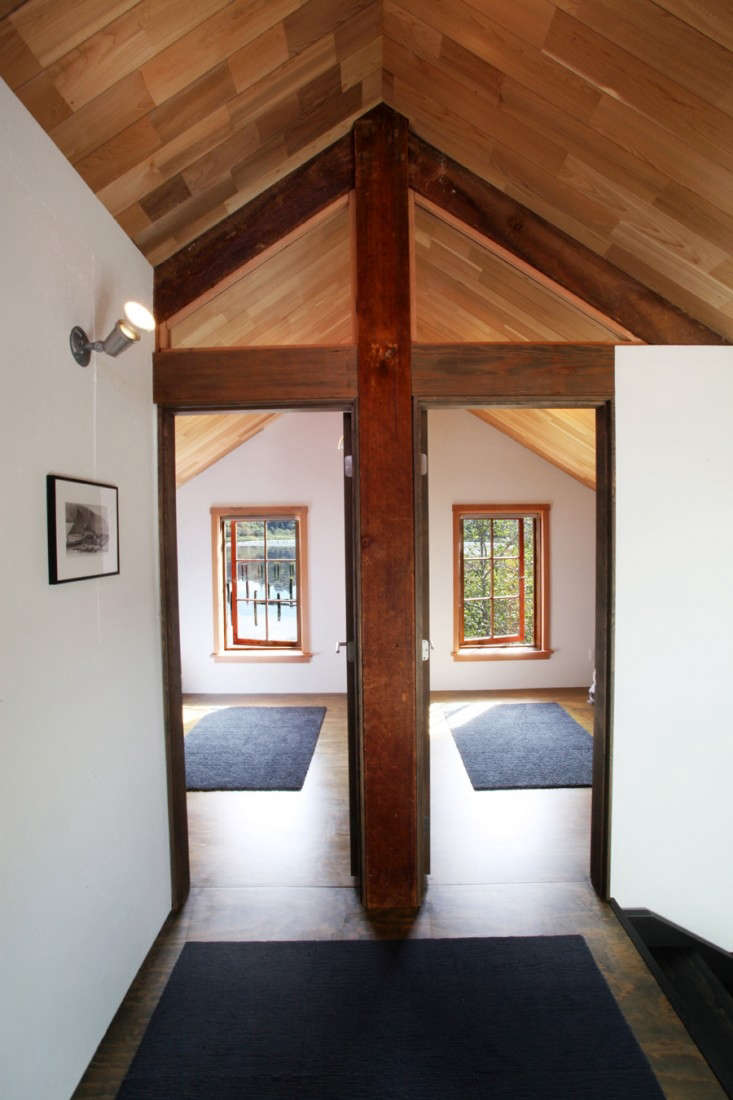 Above: The existing post-and-beam structure of the boathouse is exposed at the entry to the bedrooms. 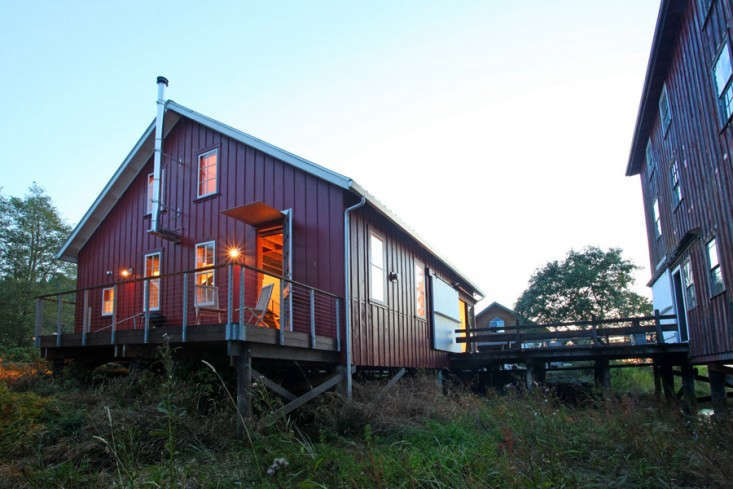 Above: A deck extends off the living/dining area and a wood walkway connects the Boat House to the Netshed. 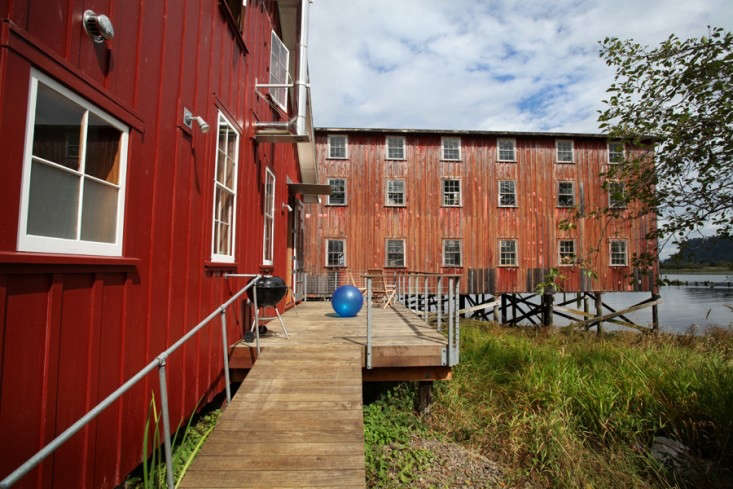 Above: Alderbrook Station was built in the early 1900’s as part of the Union Fisherman’s Co-operative Packing Company, a group of Scandinavian fishermen, that organized one of the country’s earliest cooperatives. “We heard that the fishermen originally stored their sailboats in the Netshed, but when the boats became motorized, they kept starting fires, so the fisherman built the Boat House,” says Chadbourne. 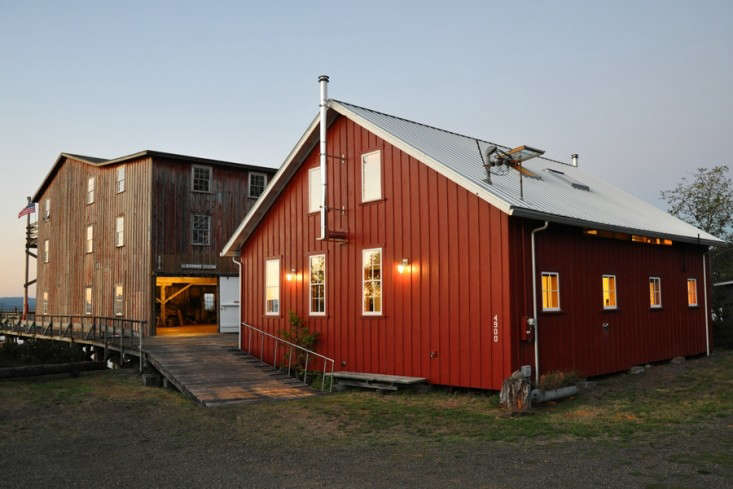 Above: The Netshed, once used to repair and store fishing nets, now hosts events, including an award-winning art installation by Sarah Biemiller and Robert Hutchinson. 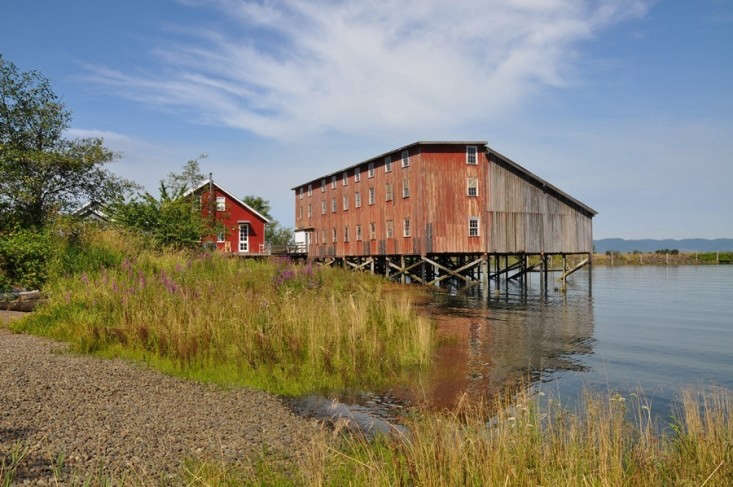 Above: Alderbrook Station is in a protected lagoon, making it the perfect spot for kayaking, canoeing, stand-up paddle boarding, and boating. Photograph by Daren Doss. 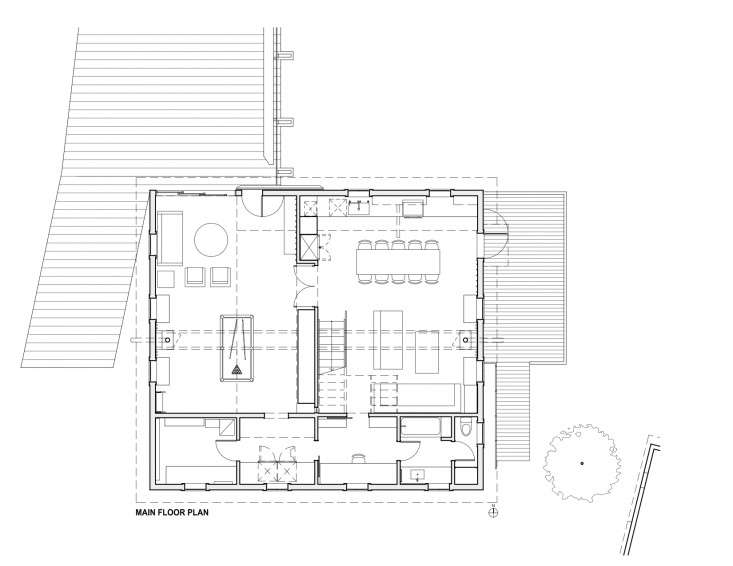 Above: A plan of the first floor of the Boat House. 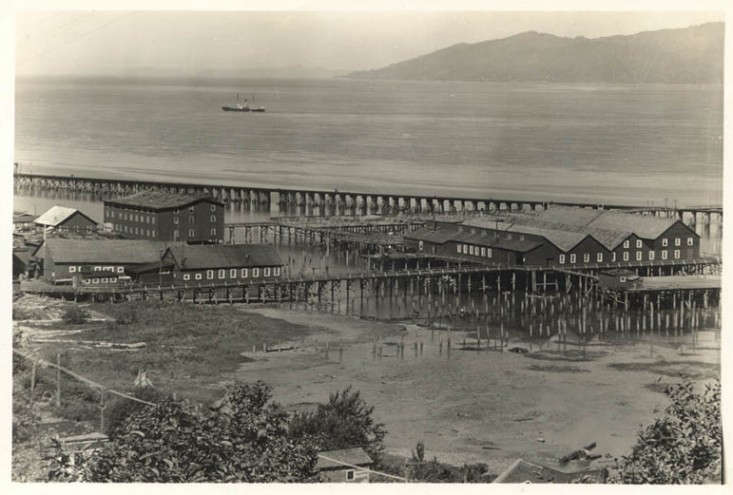 Above: The lagoon was originally filled with docks and net racks that extended out beyond the train trestle and into the river. 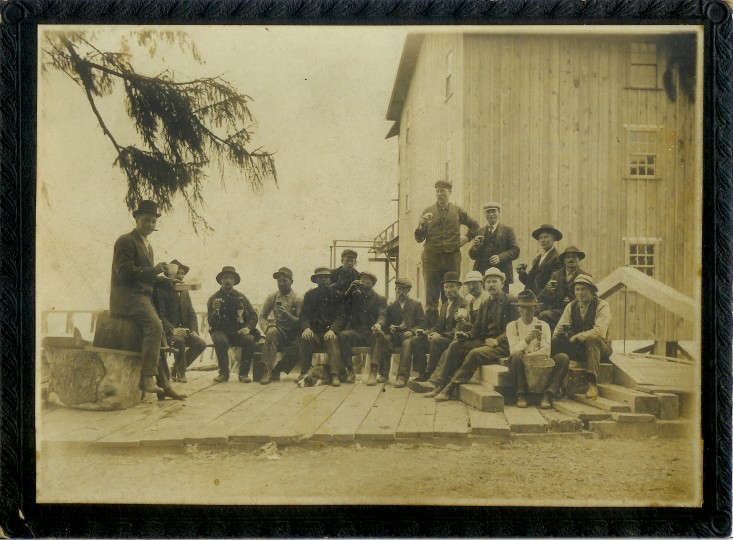 Above: The Boat House was built in 1910; this image was most likely taken during its construction.

Share our enthusiasm for boathouses? See A Boathouse with Royal Connections and 5 Favorites: Summer Boathouse Roundup. And Gardenista’s Outbuilding of the Week is A Norwegian Love Shack, a one-room cabin at the edge of a fjord.