If a quality cup of coffee is what you’re after, you must visit Melbourne. Named the Coffee Capital of Australia, Melbourne, in our book, might just be the coffee capital of the world.

Ever heard of Holy Belly in Paris? The owner was inspired to start his own coffee bar by a visit to Melbourne. And Little Collins in New York, named after a street in Melbourne, brings the Australian-quality coffee to Lexington Avenue. If we visit the new branch of Market Lane Coffee in Melbourne the first thing to notice is the text on our coffee cup: “We love to make coffee for the city who loves to drink it.” Welcome to Melbourne! Although a strong brew plays a major role in this city, just about every coffee shop has more to offer than its menu. Here is a look at my top five spots (admittedly, they all serve good coffee) for drinking and dining in Melbourne. 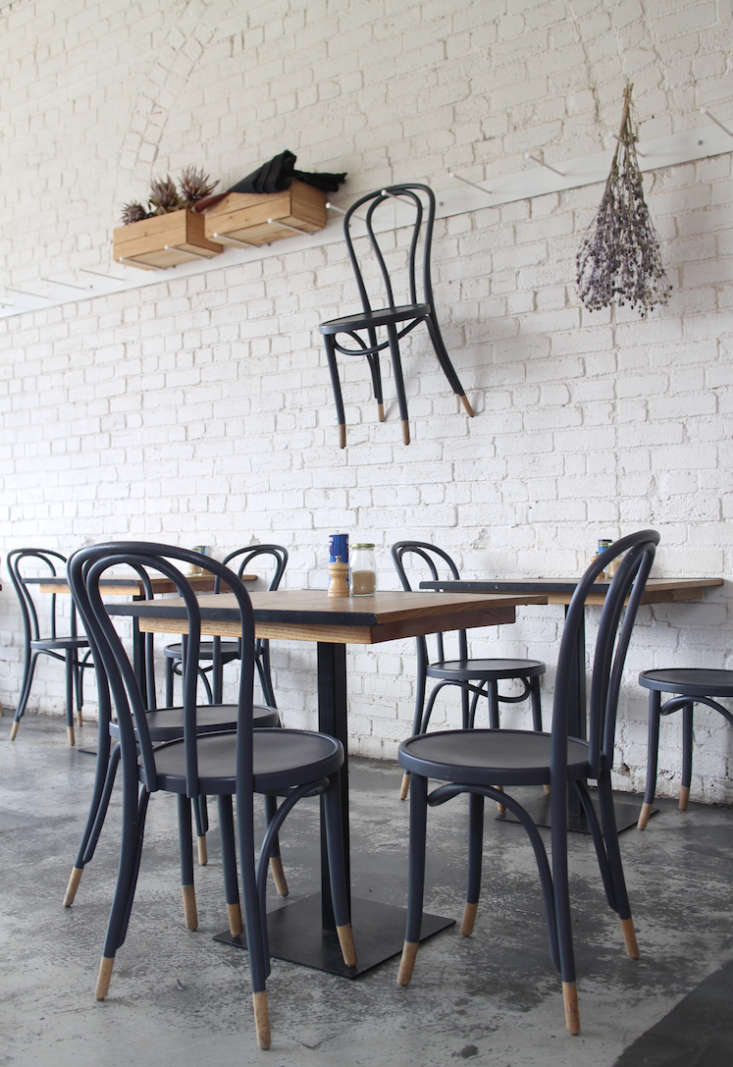 Above: Tall Timber, in Prahran near Chapel Street, is owned by Steve Rowley and Matt Vero who earned their stripes in Melbourne’s hospitality scene with their other successful projects: Coin Laundry, Station Street Trading & Co., and Touchwood. Tall Timber is praised for their brunch; don’t miss the pumpkin bruschetta. But you can go here for a house roasted coffee or a nourishing juice. Photograph via Tall Timber on Petite Passport. 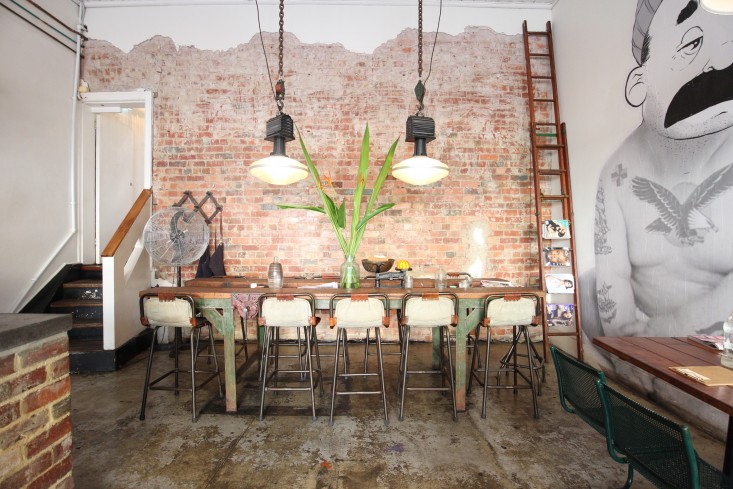 Above: Chef Pia Hambour and baker Georgina March opened Tomboy in Collingwood with the purpose of serving quality gluten-free baked goods. If you’re a Pinterest addict like myself, you’ve likely come across photos of this well-designed cafe already: The interior is wildly industrial with raw iron chairs, reclaimed pendant lights, and drywall that looks as if it’s been torn off by hand to reveal the exposed brick underneath. Photograph via Tomboy on Petite Passport. 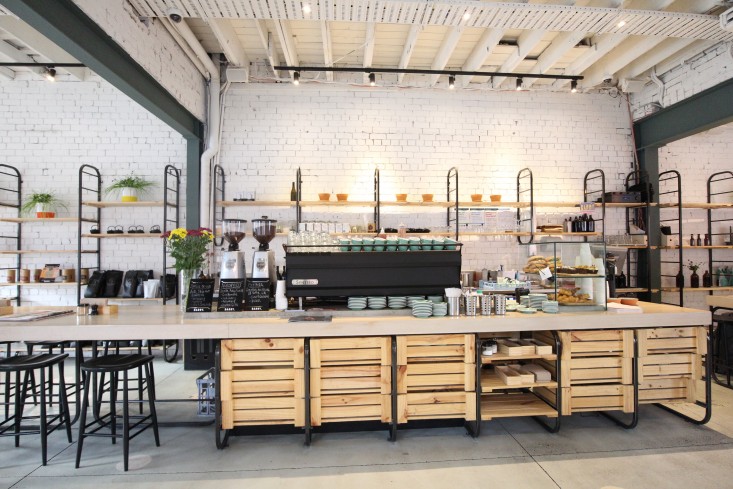 Above: Designed by Techné Architects, Barry in Melbourne’s Northcote neighborhood is the best spot for an extended brekkie, as locals would say. Custom shelving created by the firm is reminiscent of wooden shipping crates housed in a raw steel frame. The dining area is made up of white painted brick walls, Windsor chairs, and monochromatic polka dots that are seen on the floor and the aprons of the staff (they are subtle and best seen in person). Photograph via Barry on Petite Passport.

Good for an Afternoon Coffee 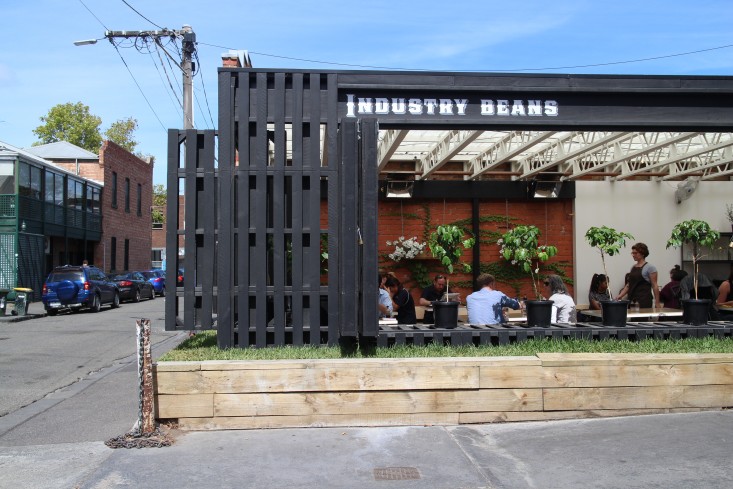 Above: Brothers Trevor and Steven Simmons run Industry Beans in Fitzroy, the Brooklyn of Melbourne. The two are incredibly enthusiastic about coffee and show me around the roaster and lab where they develop new brew techniques and pairings; think cold-drip and caviar. My favorite thing about the space itself? The terrace is modeled after a shipping container–boxy with an open, slatted roof where you can bask in the sun with just enough coverage. Photograph via Industry Beans on Petite Passport. 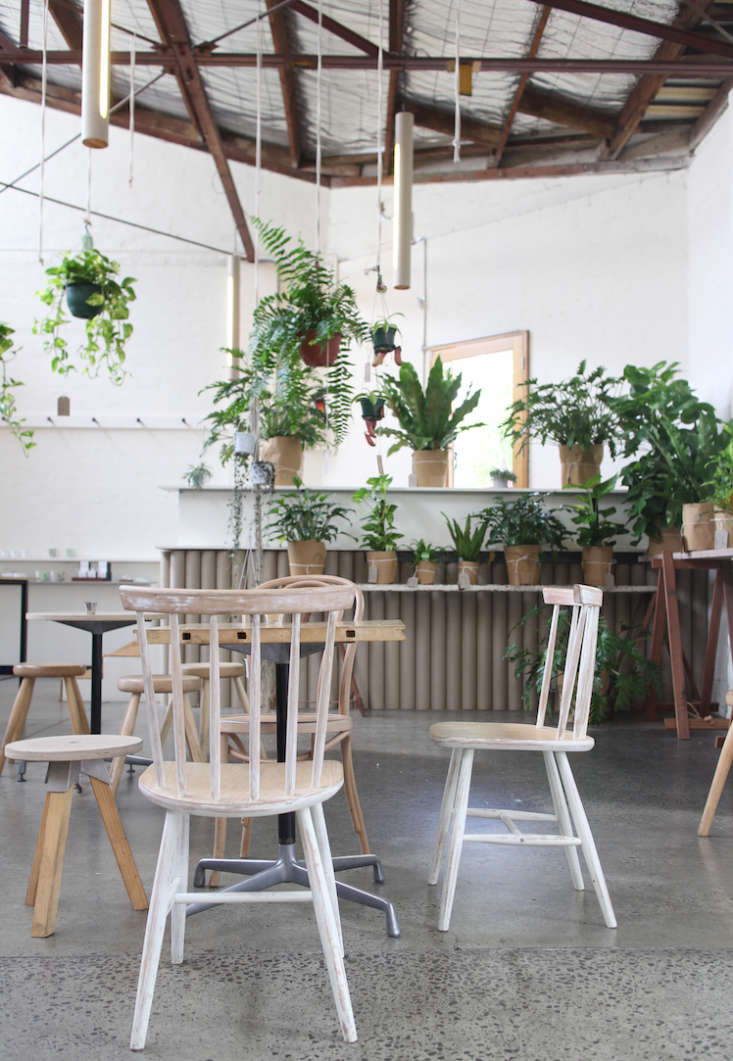 Above: Mina-no-Ie is owned by Zenta and Megumi Tanaka, who converted an old warehouse into a welcoming environment. (“Mina-no-Ie” is Japanese for “Everyone’s Home”). The Tanakas can be seen prepping dishes in the large open kitchen that looks out into the dining area, which is chock-full of communal tables and hanging plant life. There is also a home goods shop inside the restaurant space. The restaurant is located in Melbourne’s Collingwood neighborhood, an area known as a hub for architects, designers, and other Melbourne-based creatives. Photograph via Mina-no-Ie on Petite Passport.

Our new Weekend Guide columnist, Pauline Egge, is the founder and editor of the travel site Petite Passport. Pauline divides her time between the Netherlands and Spain, and spends much of her time crisscrossing the globe. For Remodelista, she’ll be sharing her favorite addresses, city by city.

For more places to eat, drink, and sleep, see our Melbourne City Guide.

Sunny Side Up: A Victorian Makeover in Melbourne