The one-story brick Victorian in Prahran, a suburb of Melbourne, had been extensively remodeled in the 1980s and was a jumble of small spaces that lacked light, access to the outdoors, and a logical floor plan. Enter Studio Four, a Melbourne architecture and design studio that righted all those wrongs by restructuring the internal flow and introducing a new kitchen and second story living quarters. Designed so that everything has its place–and to withstand a daily pounding from its young occupants–the house exudes practicality and good cheer.

Photography by Shannon McGrath via Est Magazine, unless otherwise noted. 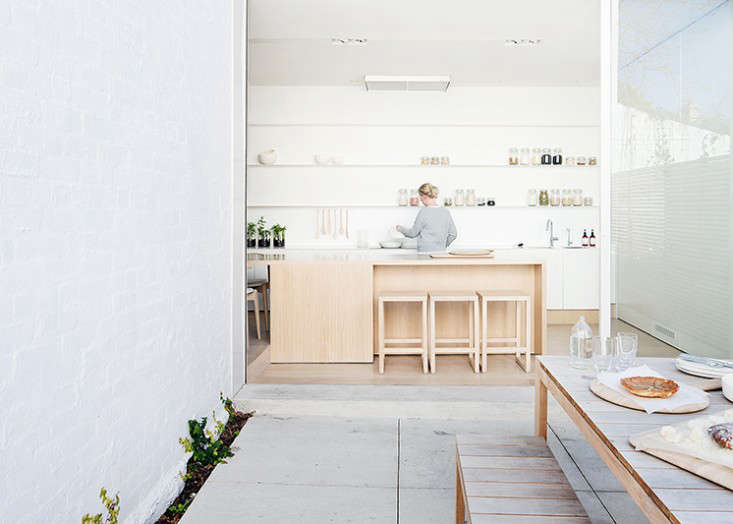 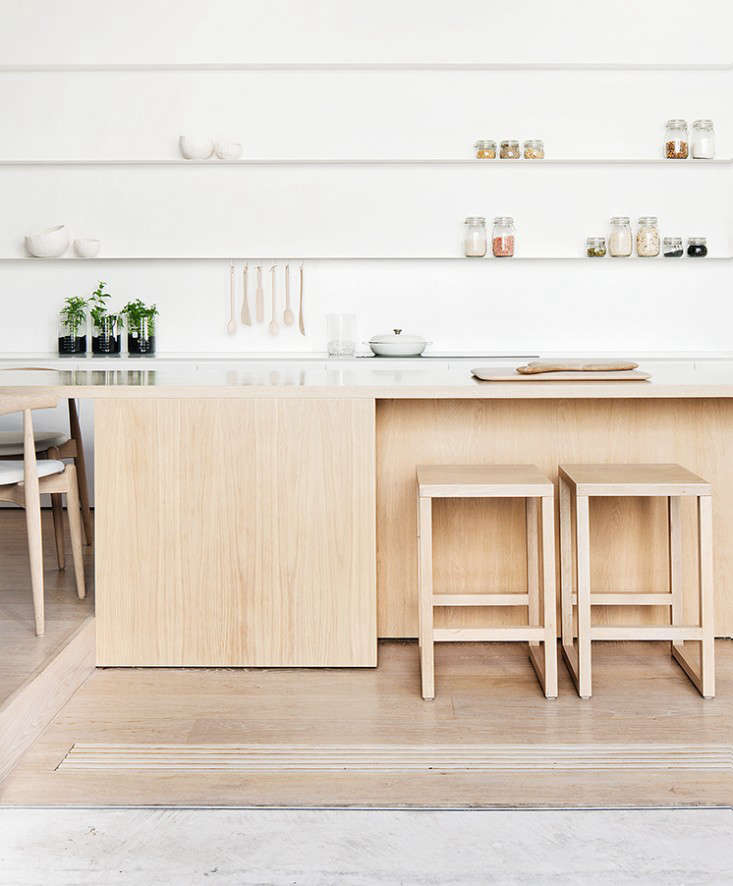 Above: The floors, island, and stools were custom-built of American oak that was selected, Sarah Henry of Studio Four told Dezeen, “because of its soft color and uniform grain.” Svelte steel open shelves run along the main kitchen wall, providing storage and display space, and, notes Henry, “minimal visual bulk.” 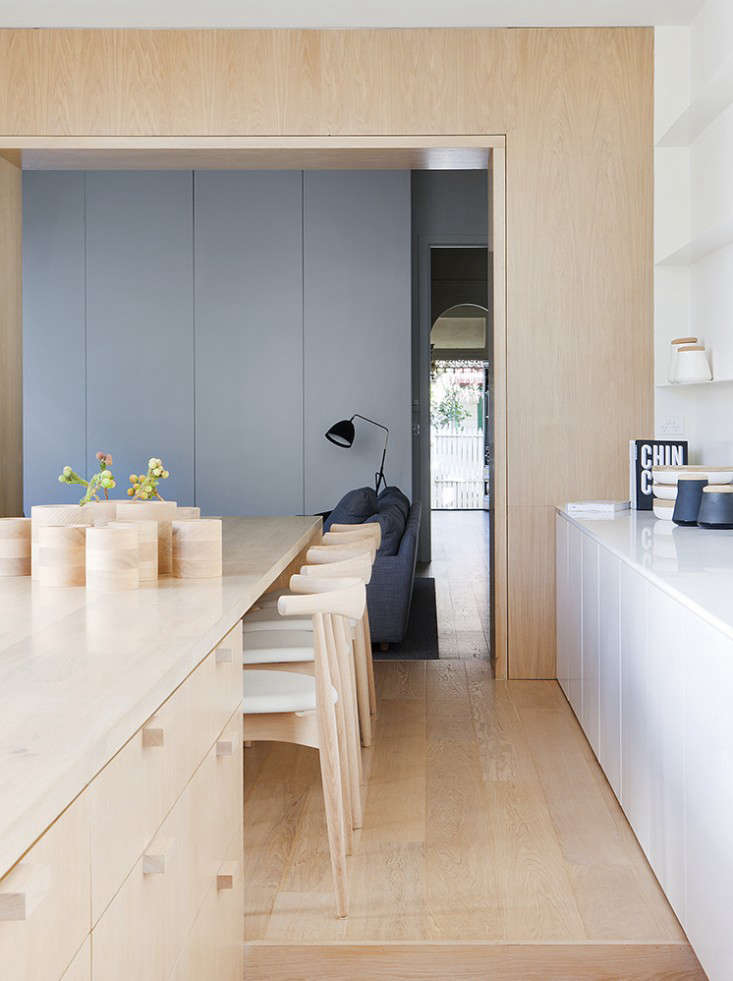 Above: The island extends into a dining table surrounded by a set of Ch20 Elbow Chairs by Hans Wegner for Carl Hansen & Sons. 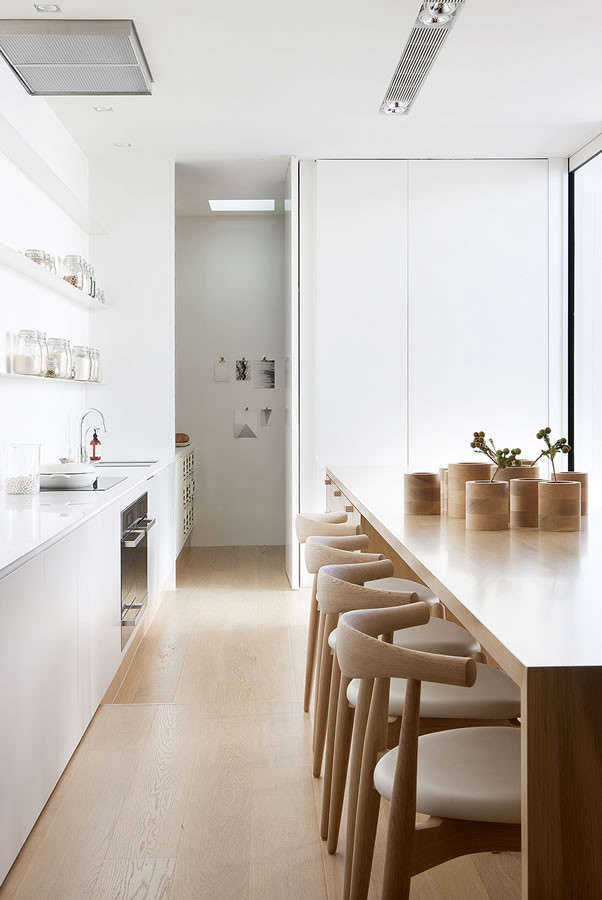 Above: The seamless counter run has beveled-edge cabinet openings. Learn about Invisible Cabinet Hardware in Remodeling 101. The room in the back contains a butler’s pantry and laundry. Photograph via Arch Daily. 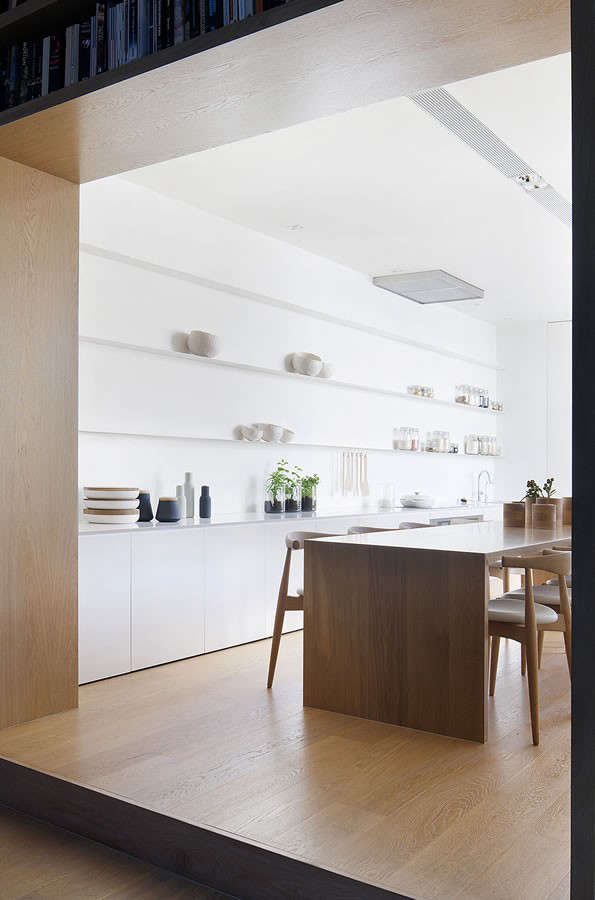 Above: The kitchen is open to the living room but raised on an oak plinth to separate the two. As Studio Four explains, “With subtle changes in floor and ceiling levels, and the introduction of new joinery elements and controlled openings, each space becomes further defined.” Photograph via Arch Daily. 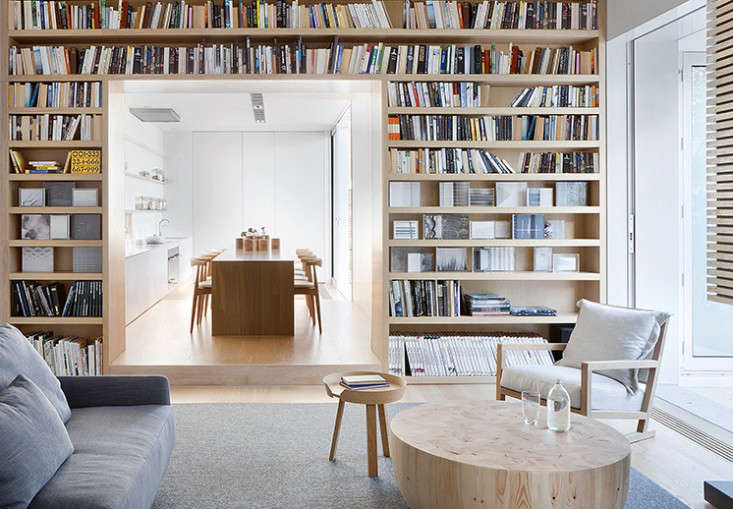 Above: Built-in shelves frame a wall in the living room, which is at the heart of the original house. 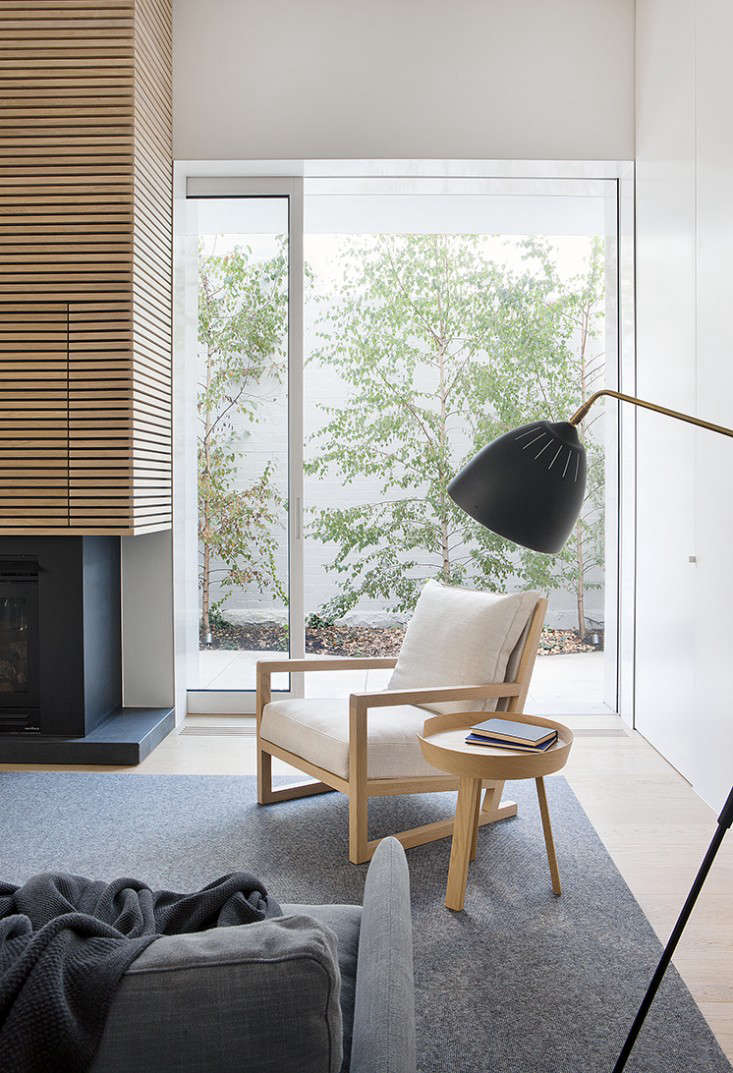 Above: A slatted wood chimney wall rises above a black steel hearth. The architects say they tied together the room by introducing a series of horizontal and vertical elements. The side table is the Around Table by Muuto.

Above: The living room overlooks an internal courtyard that provides a green backdrop and, as Studio Four points out, “an apparent extension of space.” Photograph via Dezeen. 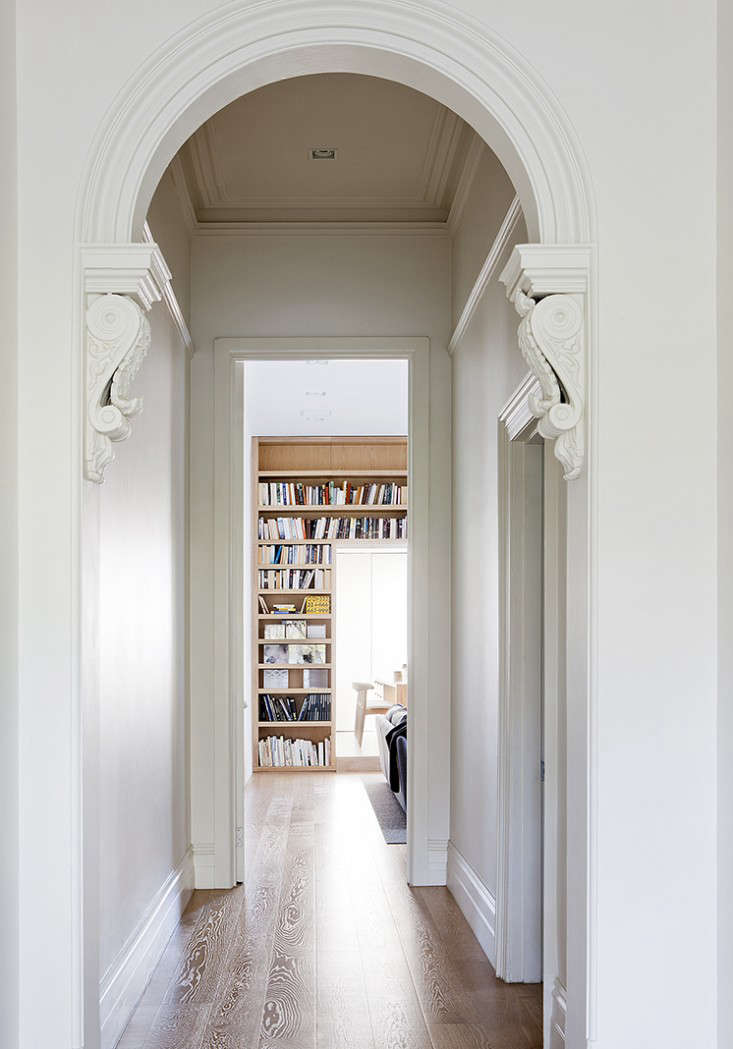 Above: Original Victorian detailing has been preserved in a hall off the living room that leads to the front door, the master bedroom, and a study. 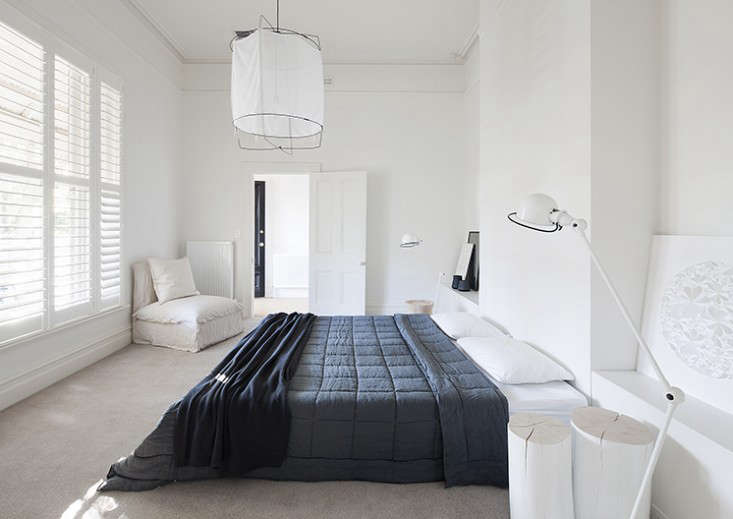 Above: The master bedroom has a platform bed that introduces the only color in the room. For similar wire-framed cotton lights, see today’s post on Pierre + Charlotte’s designs, and our earlier feature on the Koushi Lamp by Mark Eden Schooley. 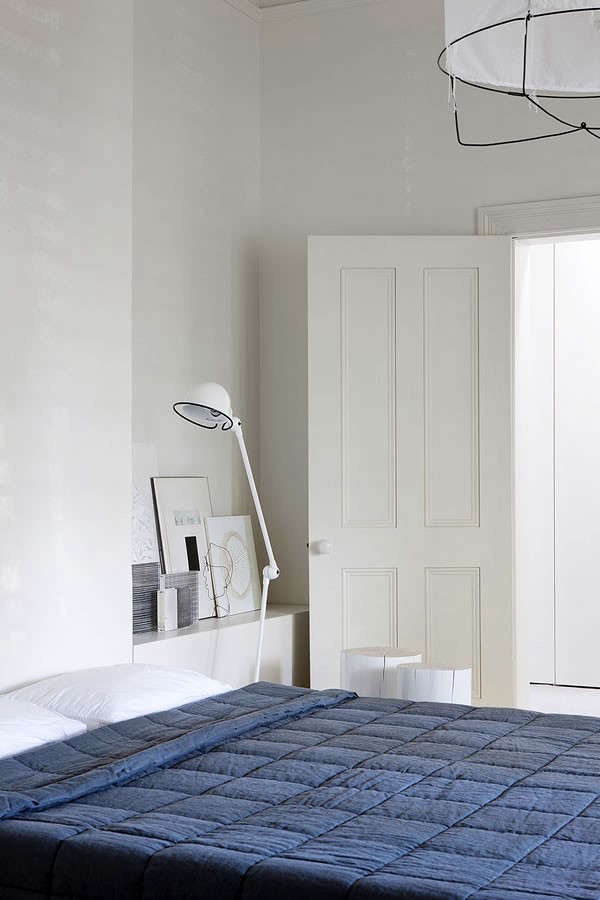 Above: A Jielde Loft Floor Lamp serves as a bedside light. 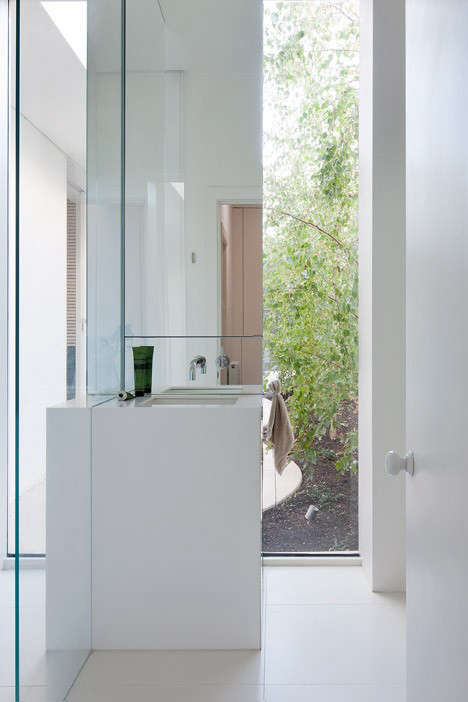 Above: The clean-lined master bath overlooks one end of the courtyard. Photograph via Dezeen. 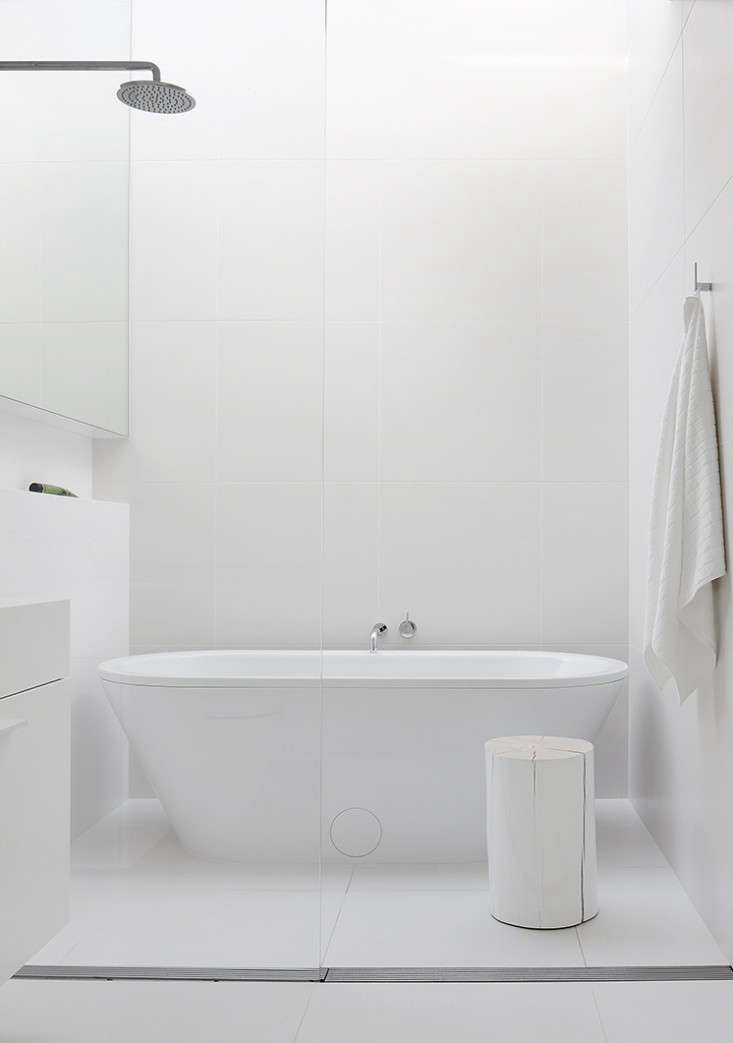 Above: A crisp, white, Scandi-inspired palette extends to every room and fills the house with light. 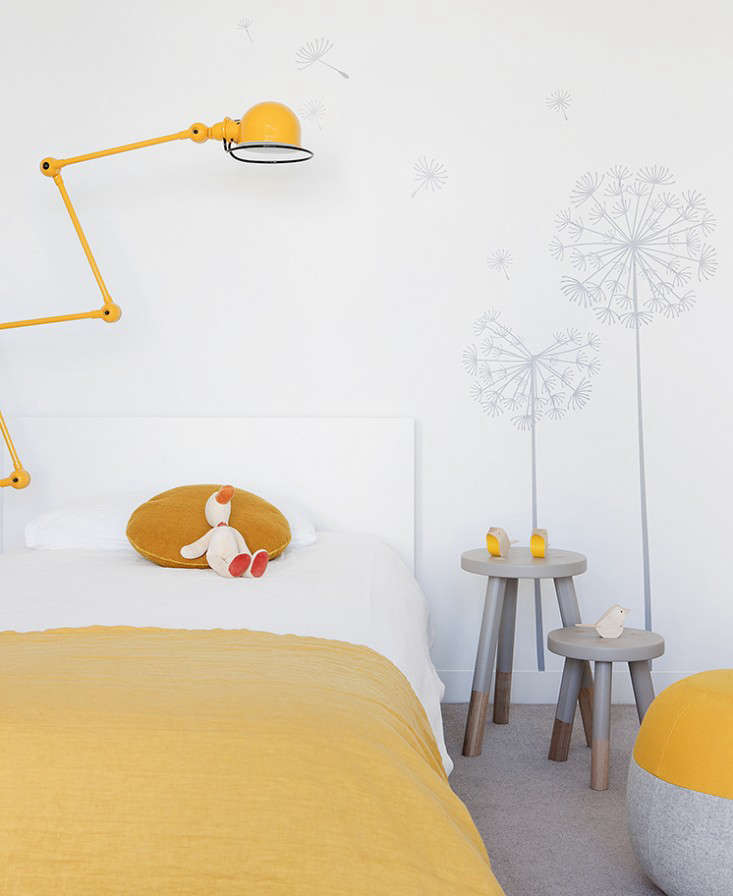 Above: Two children’s rooms and a bath occupy the new second story. This one has a Jielde Loft Floor Lamp and a dandelion vinyl wall mural. Like the cheery look? See Here Comes the Sun: 10 Bedrooms with Yellow Accents and Trend Alert: 8 Yellow-Painted Floors.

Above: A longitudinal sectional study of the house presents the tidy new room arrangement. The second story is stepped back and barely visible from the exterior. Notes Studio Four: “In contrast to the existing Victorian spaces in the front of the dwelling, which provide enclosure and a sense of seclusion, the new living areas to the rear promote openness and interaction.” Image via Studio Four. 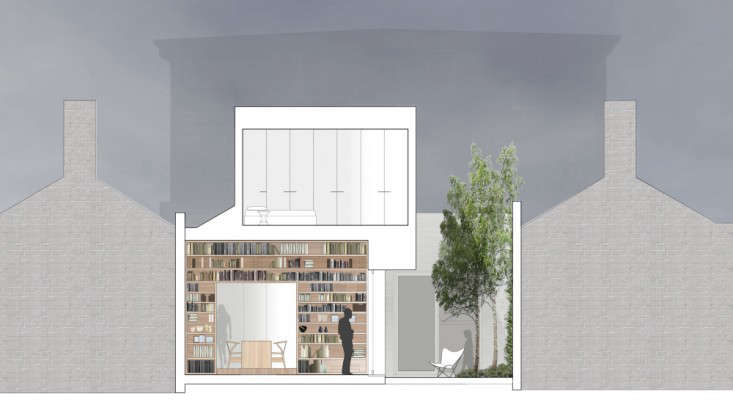 Above: A cross section of the remodel. Image via Studio Four. 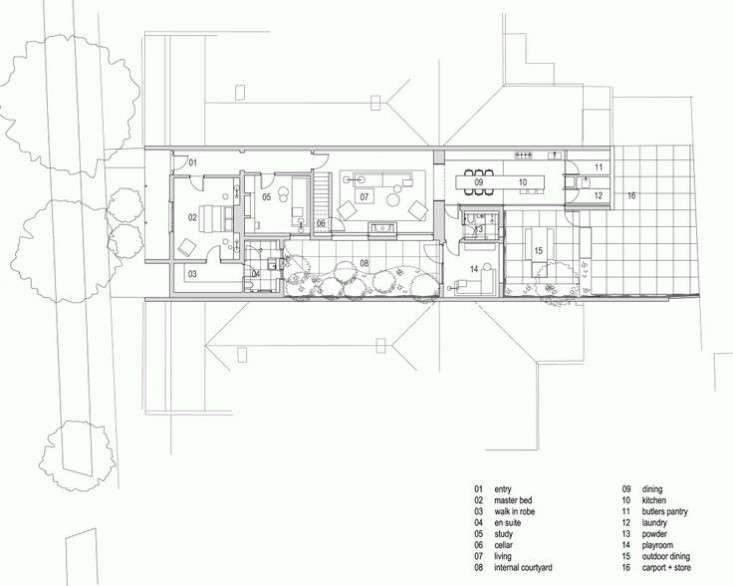 Above: A plan of the first floor shows the kitchen addition, the courtyard off the living room, and the master suite discreetly sectioned off at the front of the house. Image via Studio Four. 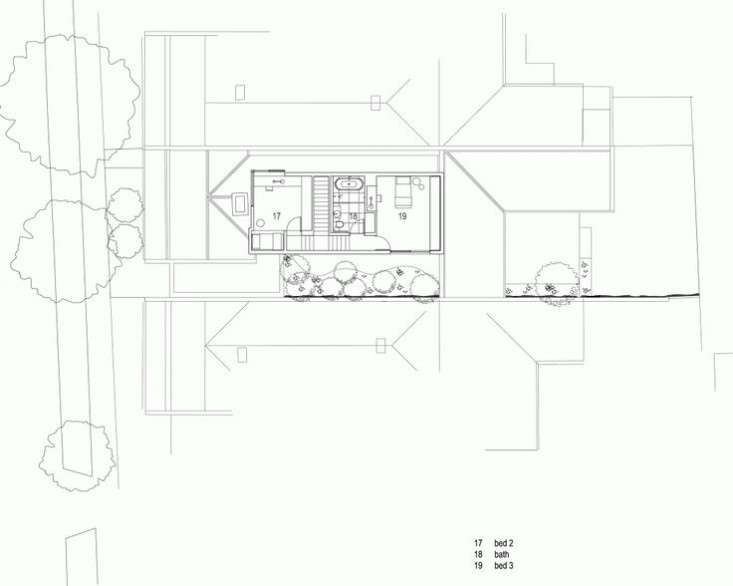 Above: The new second floor has two children’s bedrooms and a shared bath. Image via Studio Four.

For hundreds of Children’s Room ideas, peruse our photo gallery, including 24 Built-In Bunk Beds. And for another Victorian remodel with a Scandi twist, see House Call: Endless Summer, plus The Designer Is In: An All-White Kitchen in London.

Happiness Is a Warm Blanket: 10 Woolly Throws for Winter