A cinder block fireplace, shag carpet, and “babyshit blue” colored walls were a few of the daunting details in the 1950s Napa Valley ranch house that Dione Carston and her husband, Ham, faced when they moved in several years ago. Dione, an avid equestrian and interior designer, stylist, and owner of Steed Fine Hoarding & Tack in St. Helena, has filled her own home with her far-flung collections and groupings of high and low objects, antiques, and flea finds.

Most of the changes were cosmetic; as Dione says, “It’s still a pre-model. When you’re in design you can never make your mind up because you see so much on a daily basis, there is so much to choose from, and there’s always the threat of designer’s remorse. It’s an occupational hazard.” 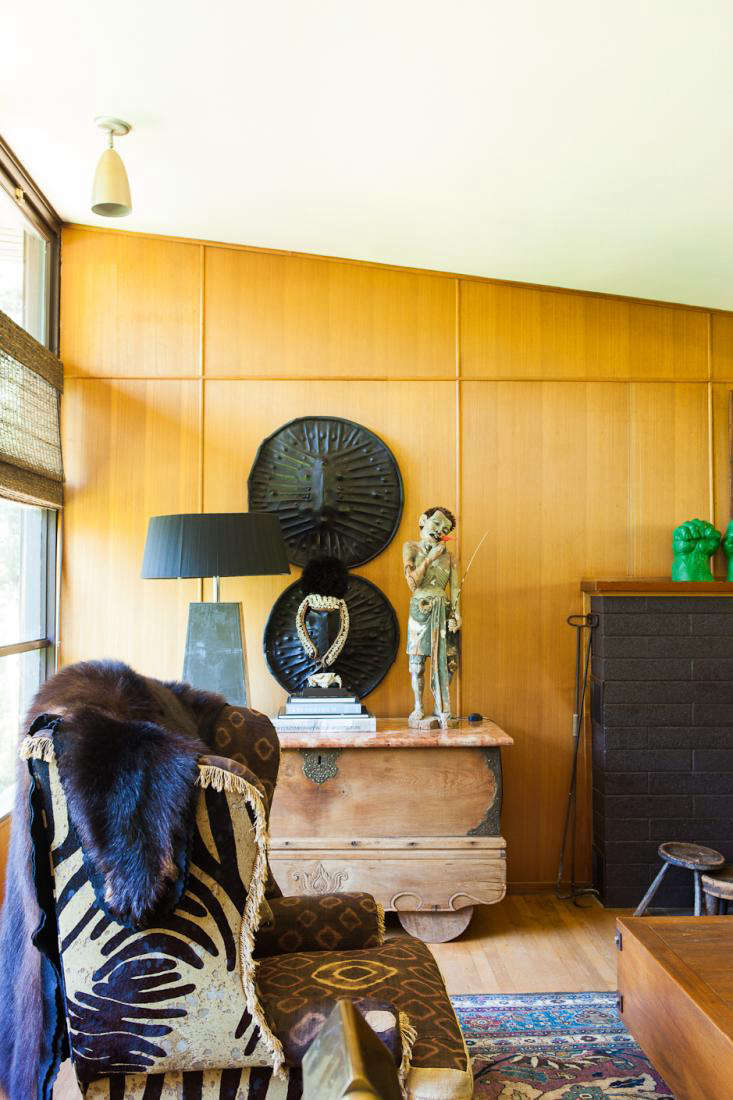 Above: The large wingback chair with elephant ears was from an estate sale; Dione recovered it in vintage Kubo cloth with hemp fringe and zebra print cow hide (a vintage bear throw is draped on top). On the wall are two museum-quality hippopotamus shields from the Arussi tribe in Africa. The green rubber Hulk hands on the mantlepiece are from Toys R Us, a gift from a friend and a reminder, as Dione says, “not to take things too seriously.” 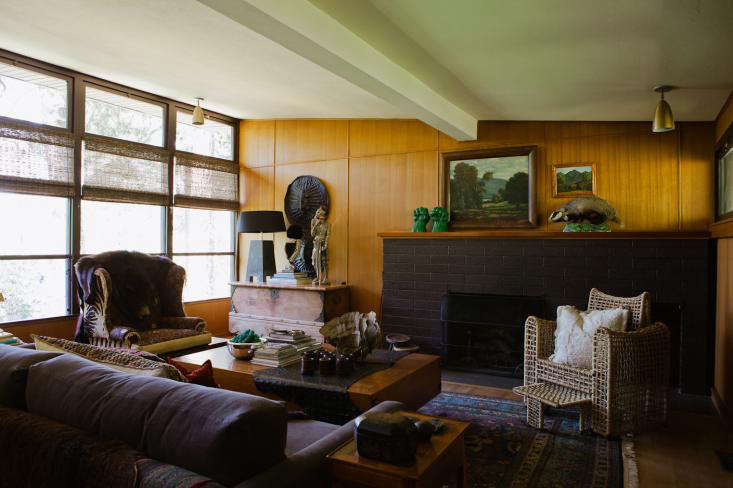 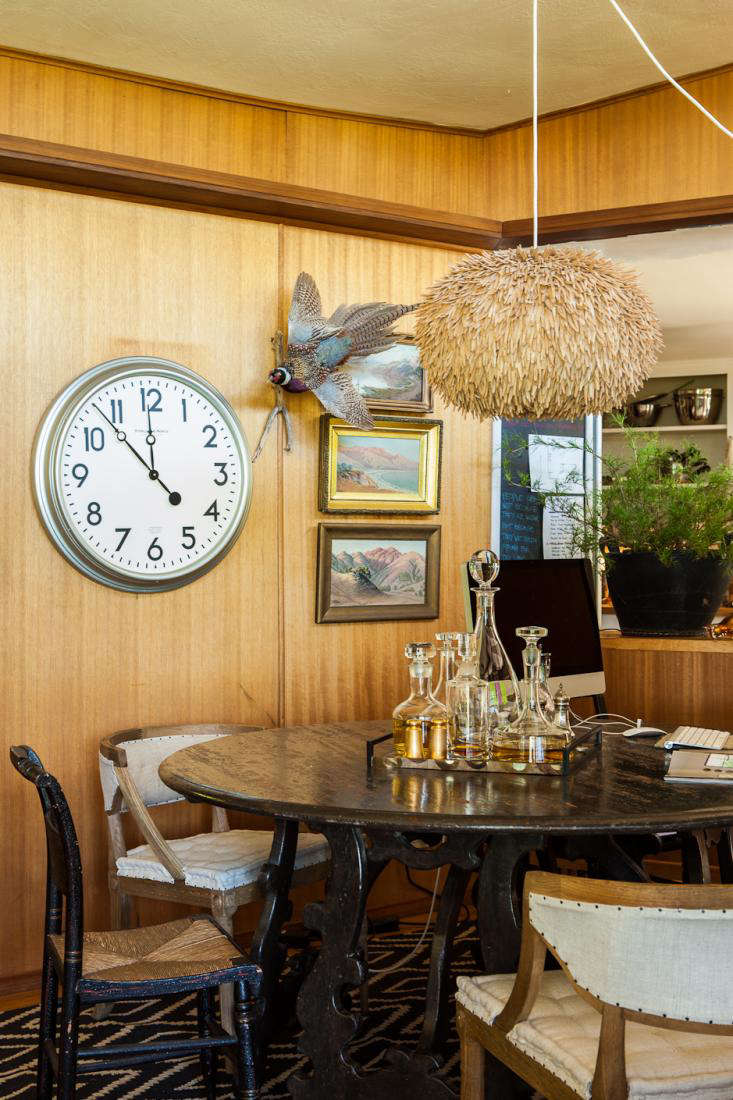 Above: Crystal decanters sourced at thrift stores sit atop an R & Y Augousti tray from Paris. The reproduction drop leaf table is a consignment shop find; the Swedish Demi Lune Chairs are from Restoration Hardware. On the wall is a collection of Ham’s oil paintings, an over-sized clock from Target, and a vintage stuffed pheasant. 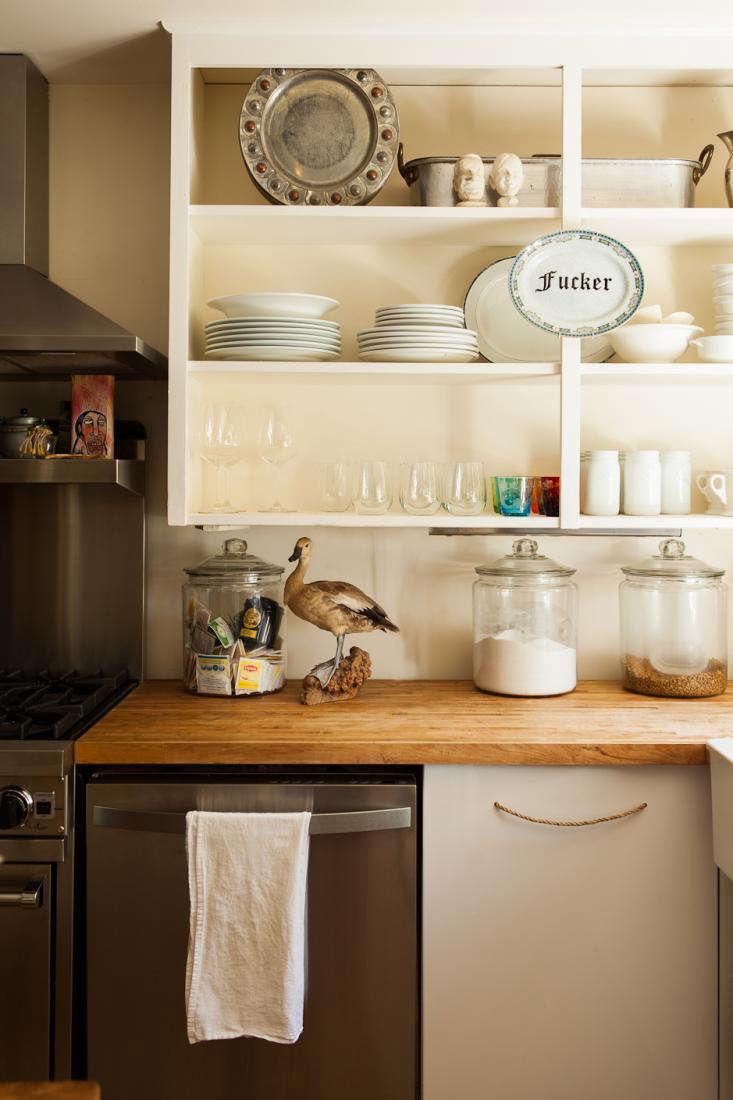 Above: Dione took the doors off the cupboards in the kitchen to create open shelving. The butcher block countertop came from Lumber Liquidators, with Ikea cabinets beneath (with rope for handles). The sink is also Ikea. The plate is a gift from a friend (for something similar, go to Vandalized Vintage by Trixie Delicious on Etsy), and the pendant lamp is an Alameda flea market find. 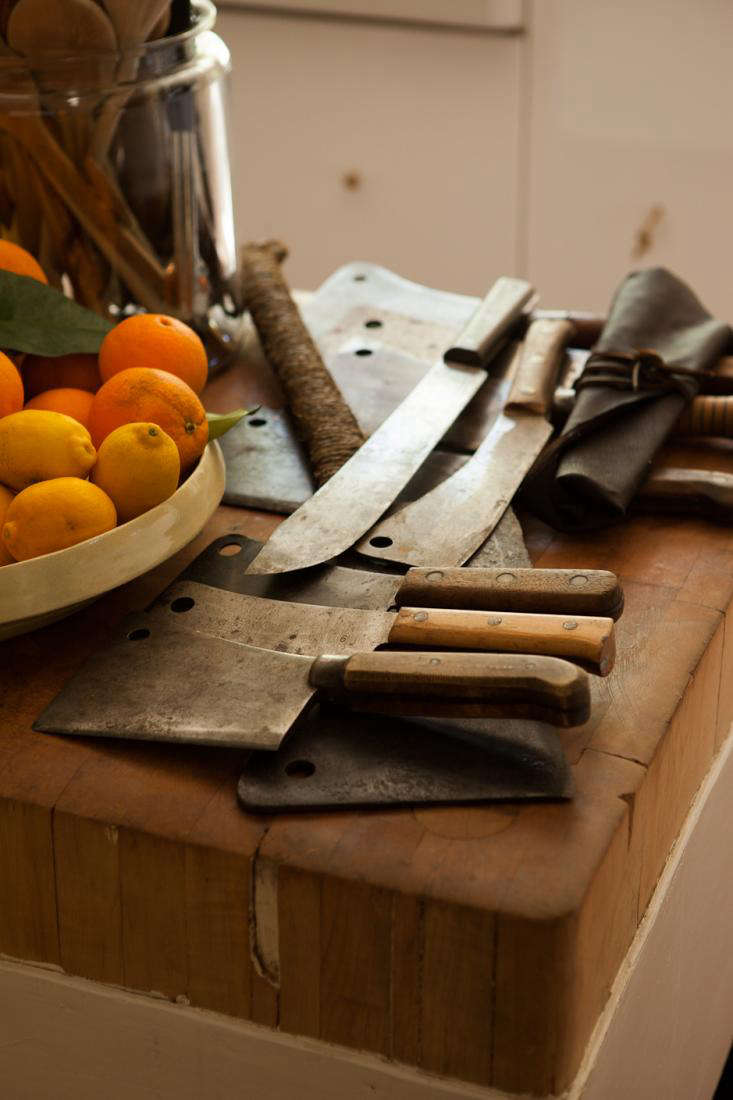 Above: A collection of cleavers from a local flea market. 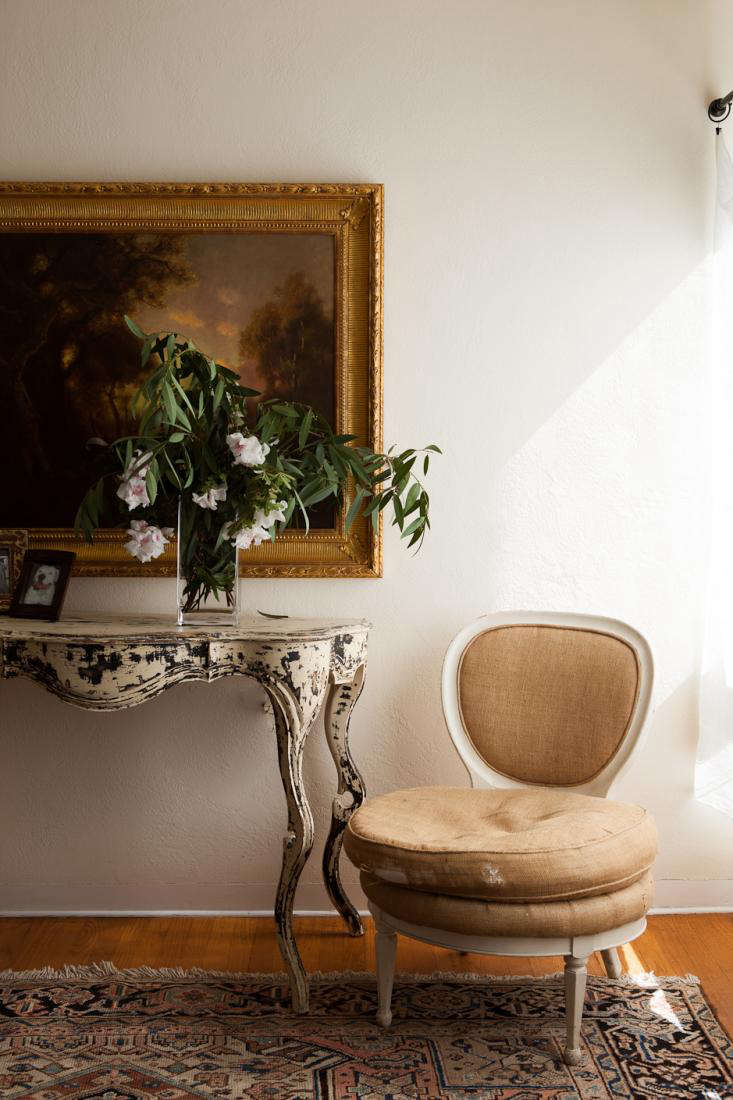 Above: The side table in the bedroom was brought back from Mexico, while the chair is a consignment store score. 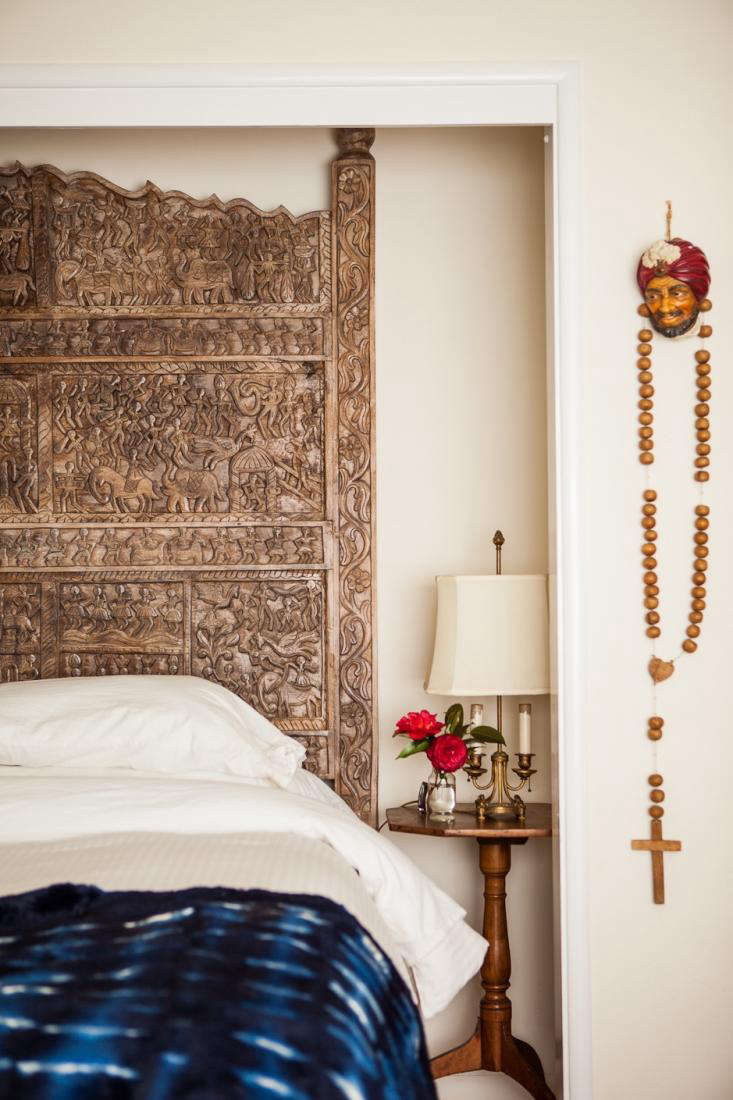 Above: For Dione, “Bedrooms are for sleeping and loving–nothing else. They should be simple, serene and as restful as possible. No technology or televisions, just a place for the mind to rest.” She pulled out the inbuilt closet and placed a Moroccan carved headboard in its place; the walls are painted Benjamin Moore Linen White. Dione had the custom indigo dyed rabbit pellet bed spread made to order (she sells similar pieces in her store). The Philippine rosary is a thrift store find. 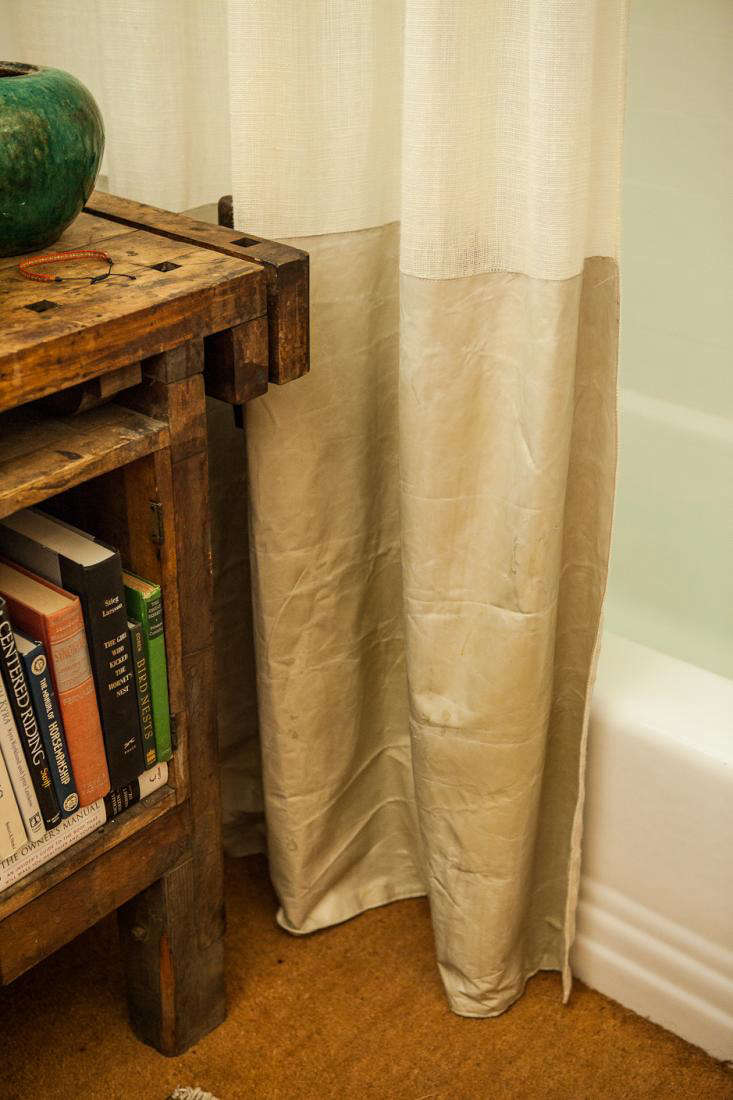 Above: Dione had the shower curtain made from linen and leather remnants. On the floor is a durable coconut hair carpet (she copied the idea after spotting it in the lobby of a European hotel); she also has it on her kitchen floor. 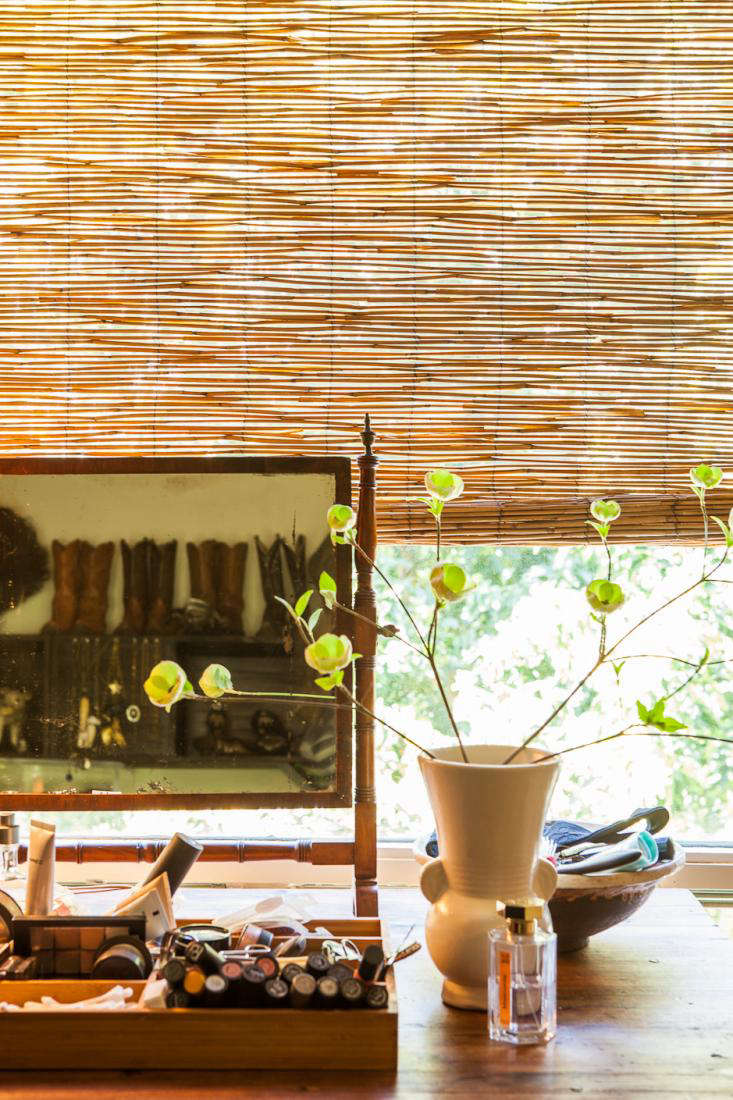 Above: An arrangement of dogwood branches on Dione’s dressing table. Dione, a onetime make up artist, is an avid horse rider. The blind is made from bamboo garden fencing that Dione cut to size and staple-gunned into the window frame. To wit, her collection of cowboy boots, which are reflected in the mirror (including Hermes boots found on eBay). 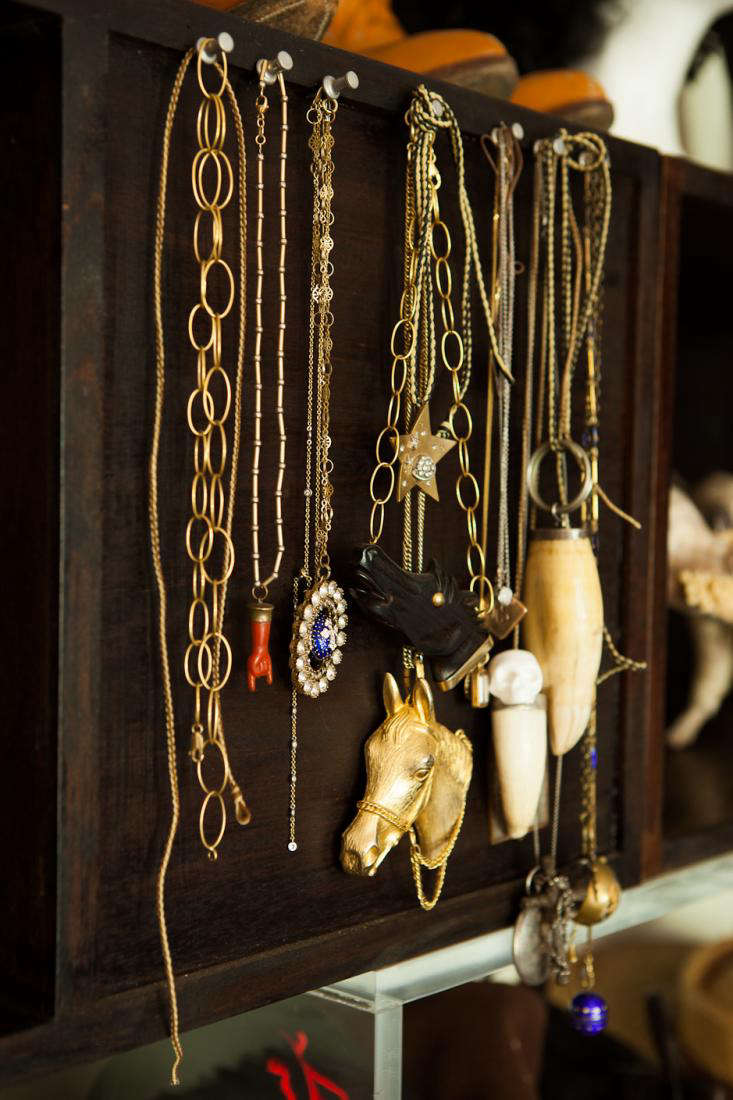 Above: Dione hangs her necklaces from steel push pins. 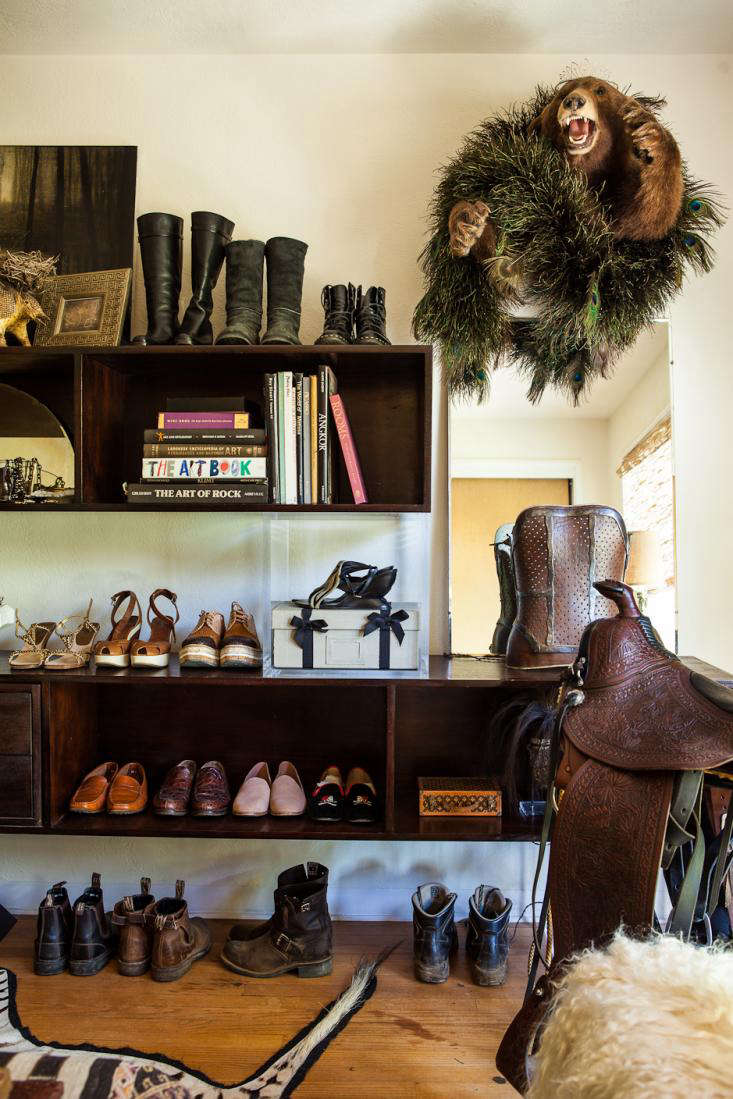 Above: “I put together a room like an outfit with layers of texture and color,” says Dione of her dressing room. The leather and steel body cast is a lamp and was a find from the Les Puces at Clignancourt in Paris. On the wall, is a bear with peacock boa and tiara for good measure with a vintage zebra rug on the floor.  On her taxidermy, Dione says, “! hate hunting and the killing of animals and only buy vintage taxidermy. I feel I am giving them a final resting place. It’s my bleeding heart part of me.” 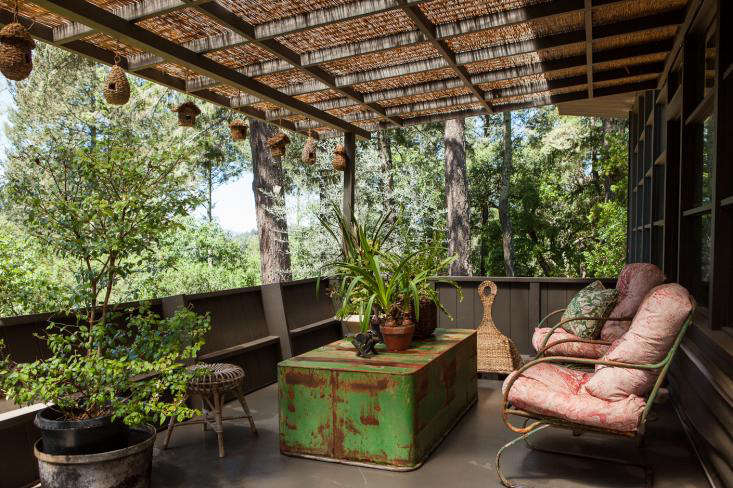 Above: On the porch off the kitchen is Dione’s “aviary real estate,” nests bought at Pier One that now house finches. The green table is an upside down cow’s watering trough. For shade, Dione installed a bamboo garden fence roof. 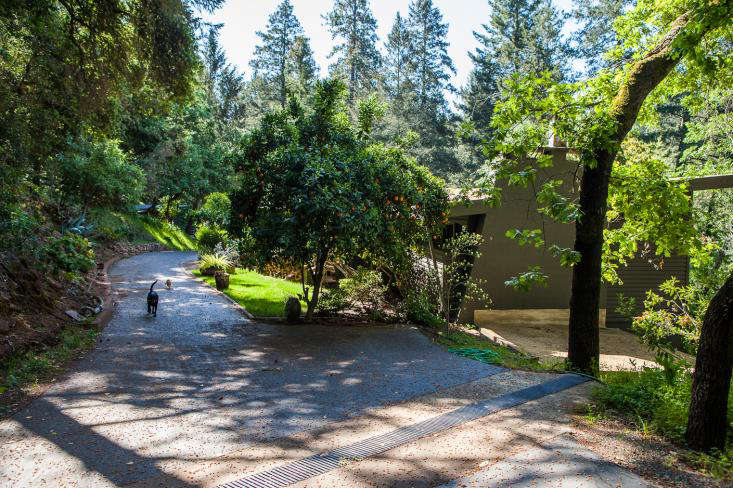 Above: The entrance to the ranch house is nestled among a stand of trees; Dione also keeps stables for her horses. 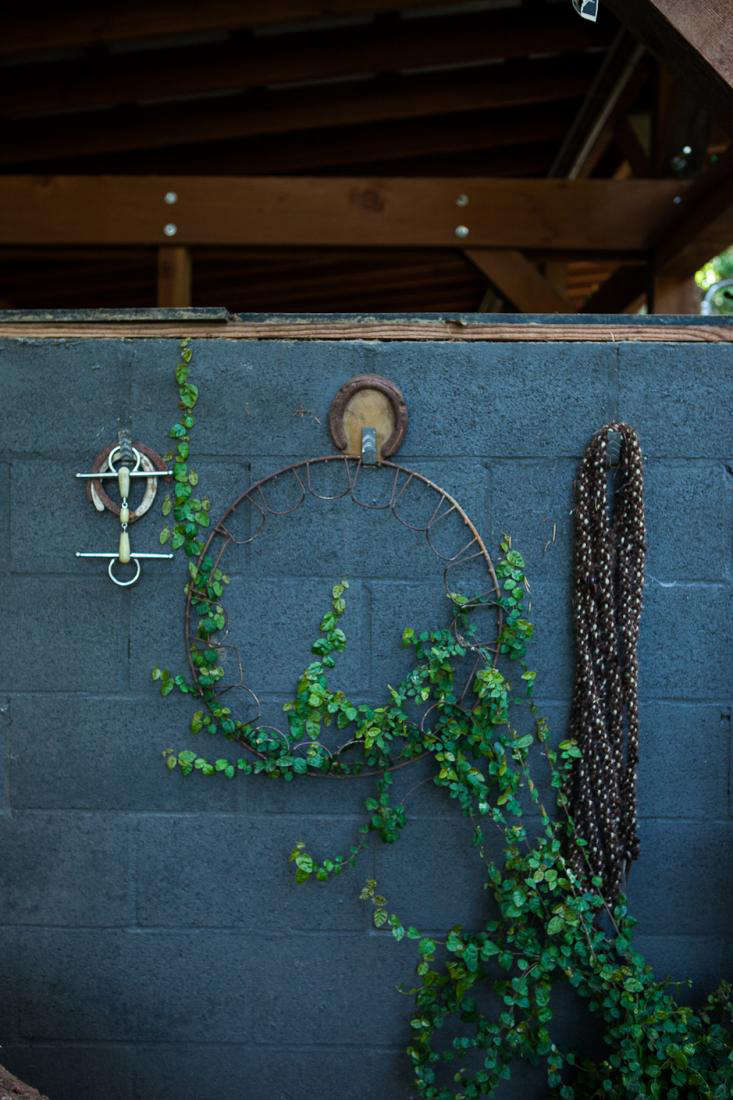 Above: The exterior of the nearby stables that Ham built for Dione’s two horses.

For more on Dione, see Steed Fine Hoarding & Tack and check out her Culo Drums.