This week, Los Angeles designers David John Dick and Krista Schrock from DISC Interiors collaborate with friend and furniture designer Glenn Lawson, a founding partner of LA homeware concept shop Lawson Fenning, and explain how sharing a passion for artisanal craft turned Lawson’s Spanish Colonial house into a home. They are available for the next 48 hours, so ask away!

With their combined backgrounds in craft and graphic design, Dick and Schrock, founding partners of DISC Interiors and members of the Remodelista Architect and Designer Directory, are inspired by the considered and well-crafted; a passion which sparked their friendship with Lawson. His LA shop, Lawson Fenning (much frequented by architects and designers), provides affordable, unique vintage and modern designs. Having owned and lived in the house for a year, Lawson had already painted the interiors white and sought help from his friends for the next phase of design. “We can honestly say this project was a true collaboration with Glenn that began with a simple conversation over coffee at La Mill and expanded into a year-long project,” Dick says. “Glenn shares our love for local designers and artisans, many of whom are our friends, so the whole project really propelled itself quickly.” 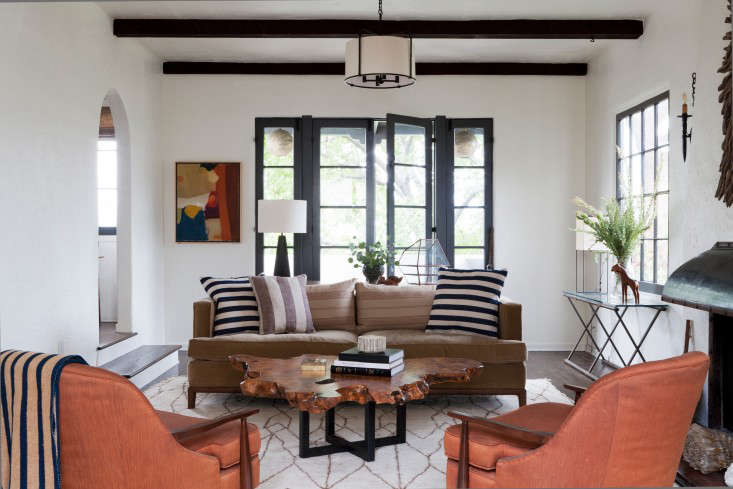 Above: The classic Spanish Colonial Revival, on a hillside in the Hollywood neighborhood of Los Feliz, was built in 1926 and is entered via the second floor, which opens into the public spaces.

Above: “In the living room, the integrity of the architecture and creating a floor plan that worked with the views from the patio were our primary concern,” Dick says. The Montebello Sofa and Redlands Table are from Lawson Fenning, while the desk behind the sofa is from BDDW–one of the designers’ favorite American furniture companies. A vintage Moroccan carpet provides a neutral base to the earthy tones of the room. 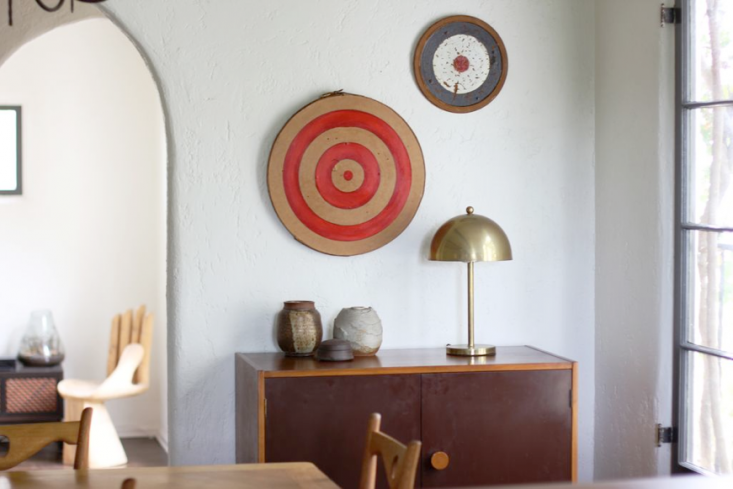 Above: A collection of works from 21st century Los Angeles artisans and a midcentury credenza share space in the corner of the dining room. 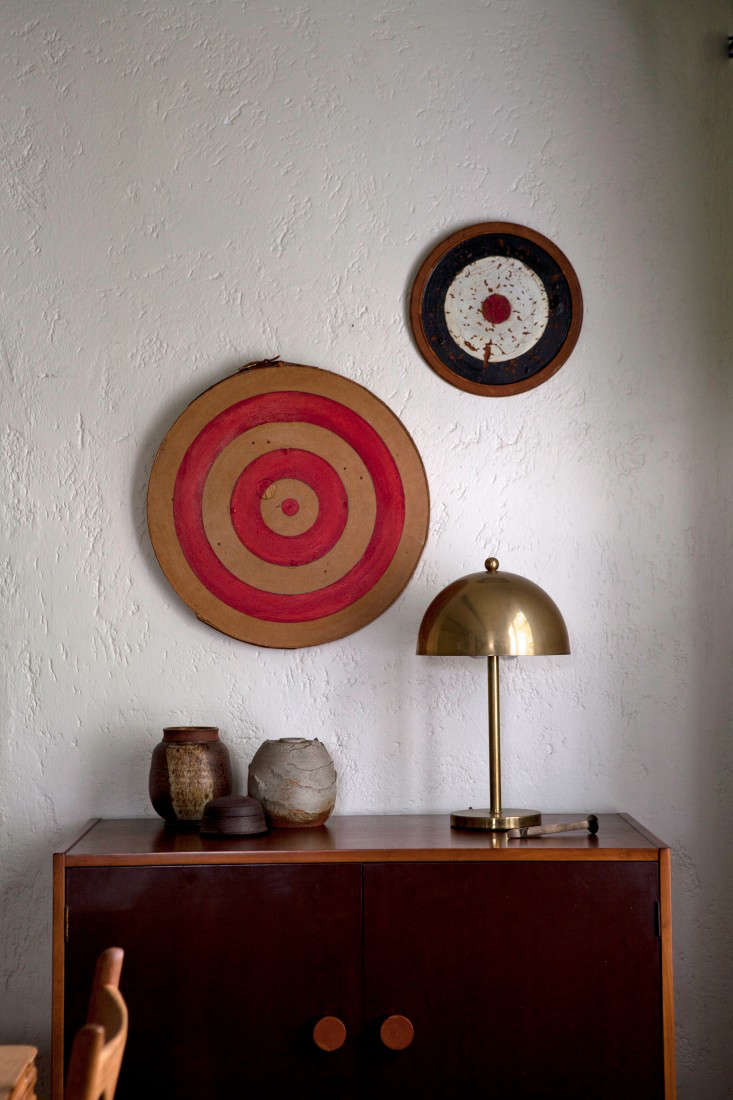 Above: Painted circular wood “cut-outs” by Jason Koharik, an LA lighting designer and artist represented by Lawson Fenning, serve as vivid punctuation marks against the textured surface of the wall, typical of Spanish Colonial homes in the area. The brass lamp is by Atelier de Troupe, another LA designer, and the credenza is by Gilbert Rohde, a midcentury furniture designer best known for his contributions to modern design at Herman Miller. 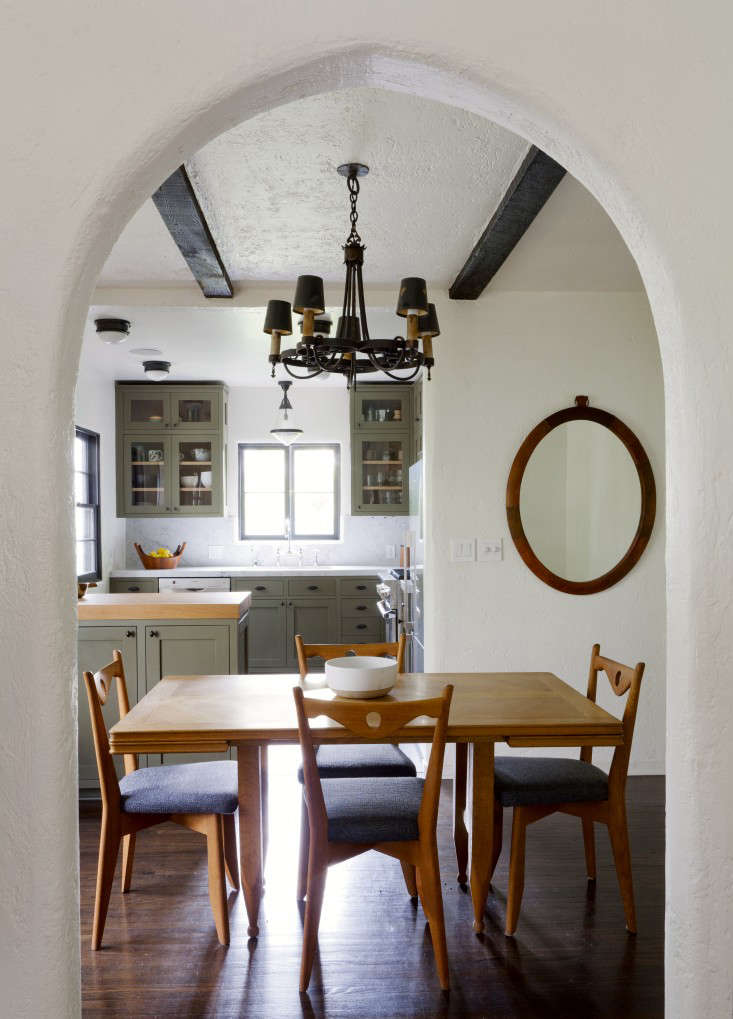 Above: The designers retained the ceiling pendant, which was original to the house, and mixed in a midcentury dining set by Guillerme and Chambron for Votre Maison along with a custom leather wall mirror by LA lighting designer and artist Jason Koharik. 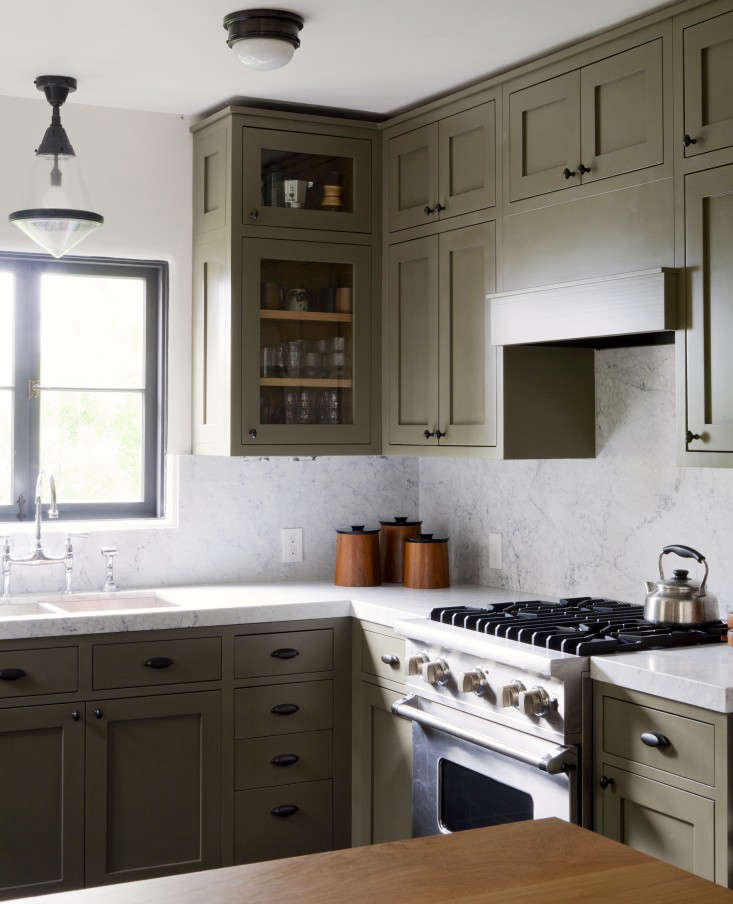 Above: Inspired by traditional English cabinetry, Plain English in particular, the designers worked with Dakota Witzenberg and Chad Petersen, custom furniture and cabinet makers of Todosomething, to create kitchen cabinets that incorporate a sense of timelessness. The cabinet paint color is a milk paint with a matte finish that has been custom mixed to match Pratt & Lambert’s Olive Bark and is accented with oil-rubbed bronze cabinet hardware from Schoolhouse Electric. 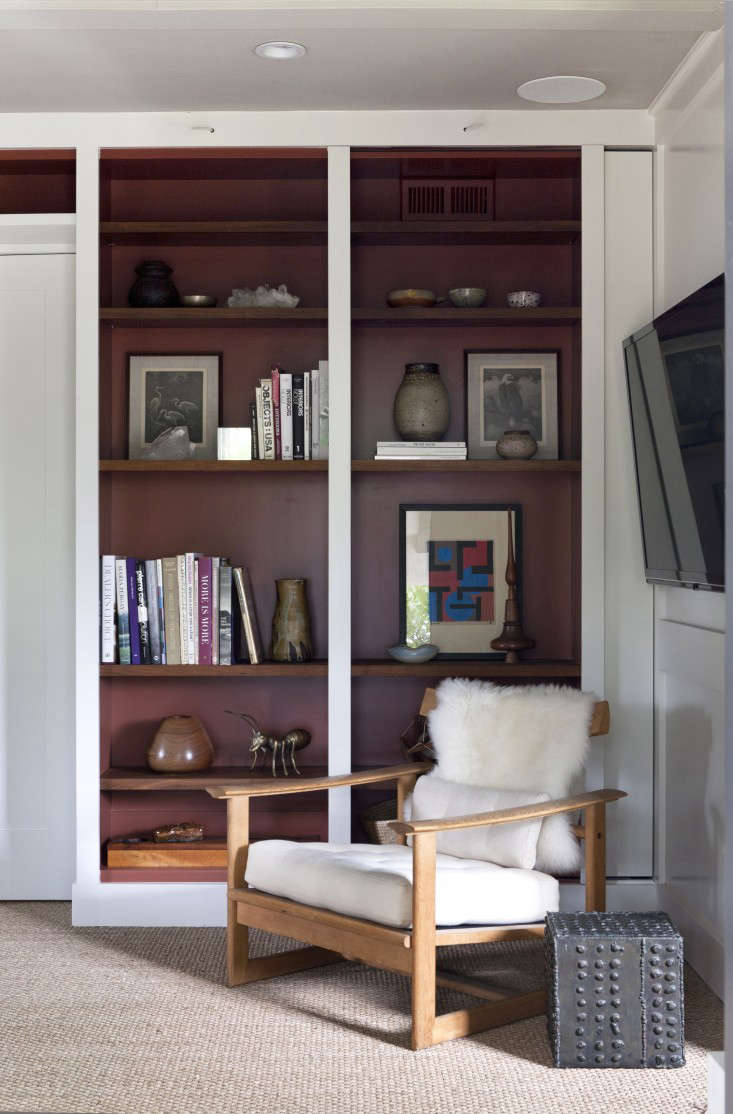 Above: “Adding a deeper color works to bring a sense of richness to the downstairs lounge, which is actually quite small,” Dick says. “The shelves become a modernist work of art in themselves, creating a space for Glenn’s collection of design books, sculptures, and ceramic collection.” 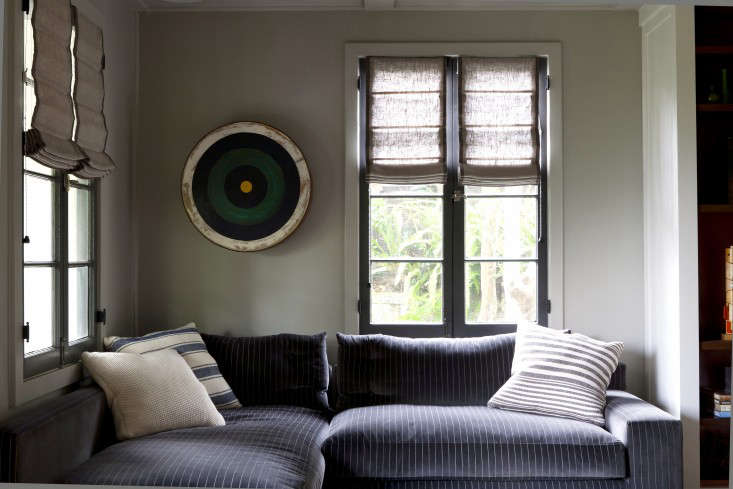 Above: Burlap linen Roman shades and pinstripe velvet fabric from Pindler and Pindler add texture to an informal, comfortably masculine setting in the downstairs lounge. Glenn Lawson designed the sofa specifically for this room and it is now carried by Lawson Fenning. 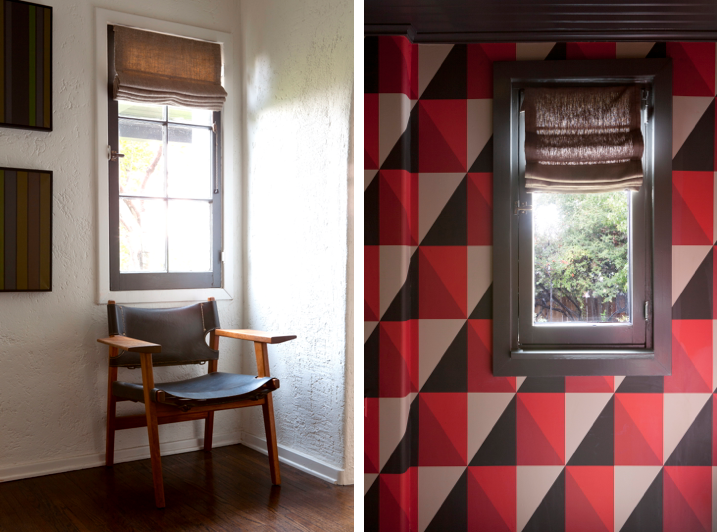 Above L: A midcentury chair by Danish furniture designer Borge Mogensen anchors a corner of a room. Above R: The wallpaper in the downstairs powder room is from Cole & Son; the pattern is called “Apex,” from their Geometric Line. “There is something about using a large graphic pattern in a small space that adds a sense of tension to a room,” Dick says. 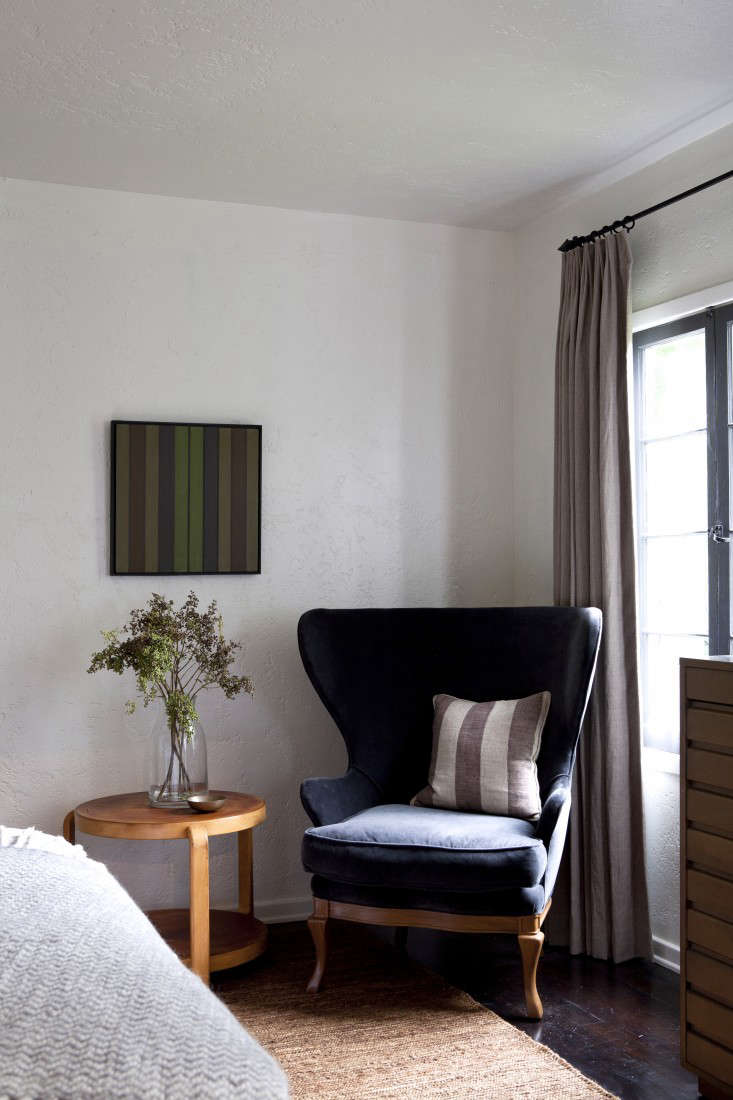 Above: In the corner of a bedroom, a British abstract oil painting from the 1960s by an unknown artist hangs above a midcentury side table and a Highland Wingback Chair designed by Lawson Fenning. 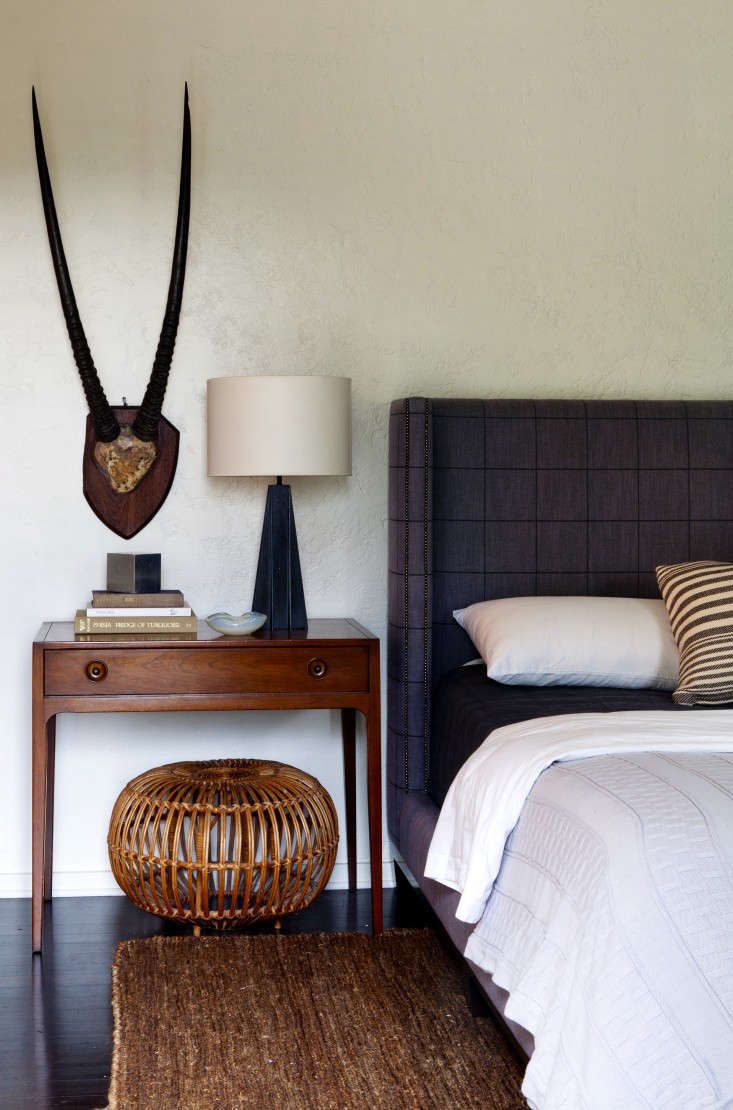 Above: “We are strong believers that every room should have something vintage to add a sense of history to a space,” Dick says. “When we build vignettes, it is really about trusting our own instincts, creating balances and tensions with textures, shapes, colors, and materials; ultimately giving in to a sense of play until it appears to work.” 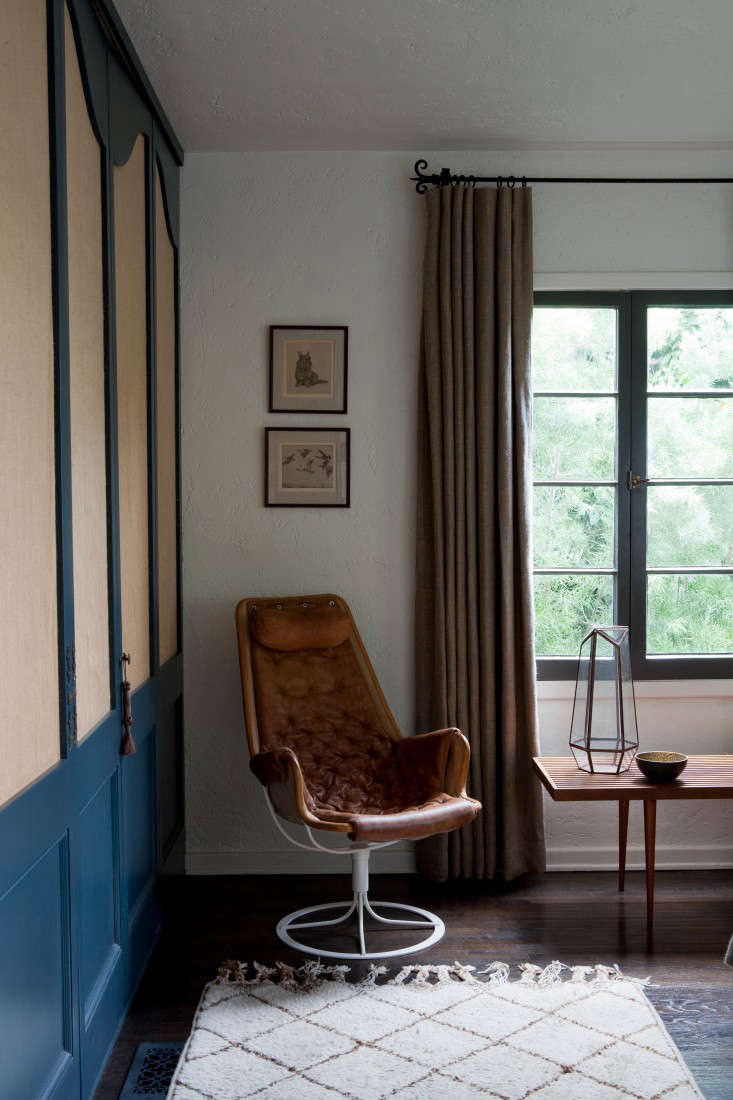 Above: Lawson updated and transformed a wardrobe, which was original to the house, with a coat of Midsummer Gale from Pratt & Lambert. A Bruno Mathsson “Jetson 66” is the vintage piece that imbues the guest room with history. 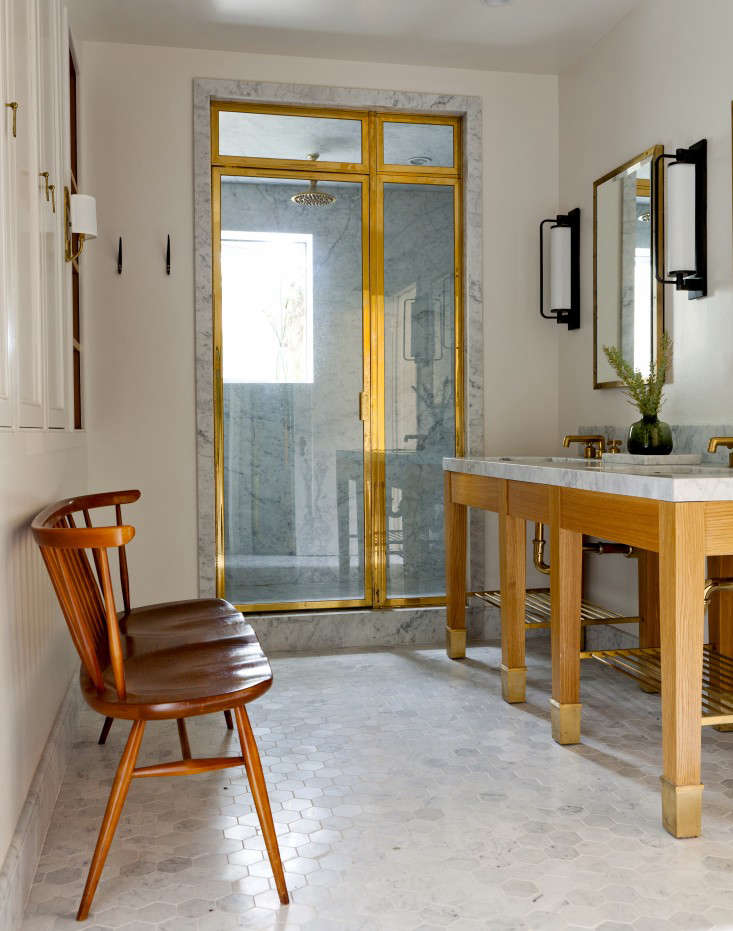 Above: “The master bathroom has a feeling of an Italian guest suite, with custom oak cabinetry, a brass and marble enclosed steam shower, and Henry Plumbing Fixtures from Waterworks,” Dick says. “We love to work with raw materials, and we love to mix and layer them in different ways. Using materials such as brass, oak, and marble will always feel modern yet historical, and they will actually look better as they age over time.” A vintage Ercol spindle bench provides seating and towel storage. 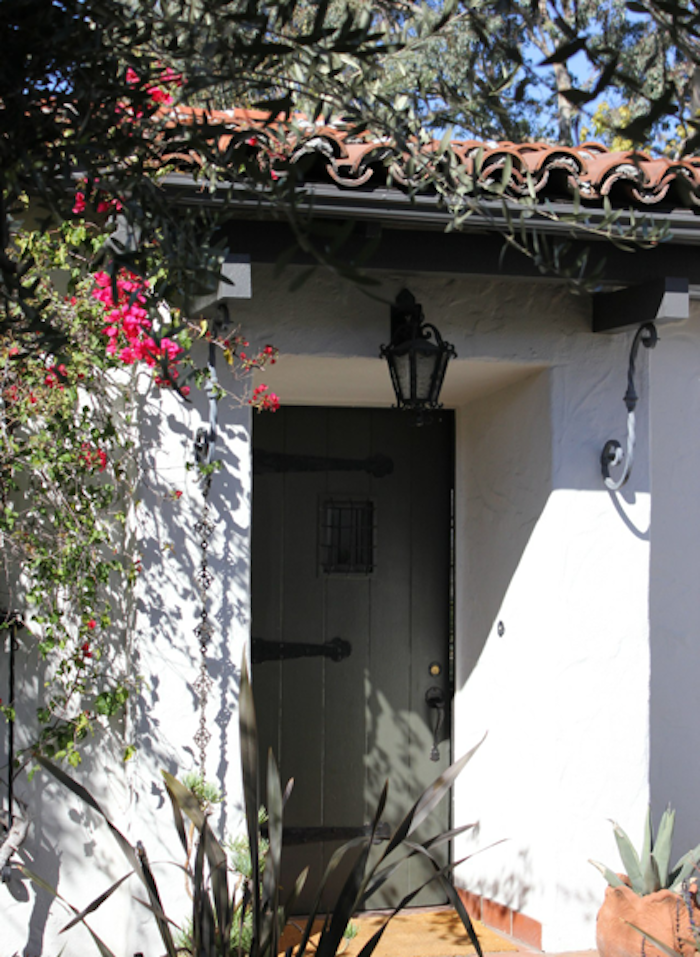 Above: The entrance to Glenn Lawson’s Spanish Colonial home.

Exposed beams lend instant character to any interior, which is why DISC Interiors were careful to preserve the original exposed beams of this Spanish Colonial home. See 610 other examples of Exposed Beams in our Gallery of rooms and spaces.