The scene: a one-bedroom apartment in a prewar building near Columbia University on the Upper West Side. The characters: a creative parental couple (an opera composer and professor father and a mother active in the arts world) and a writer/poet daughter who inherits the apartment and aspires to tell her family story through her environs.

A modernist at heart, the daughter commissioned Larry Cohn, founding principal of Shadow Architects (a member of the Remodelista Architect/Designer Directory), to help her update the architectural shell while also reinterpreting the history of the apartment).

The result: A home with a family narrative woven through the interiors, plus an economical Ikea kitchen. Cohn is available for the next 48 hours to answer any and all questions, so come take the tour and ask away! 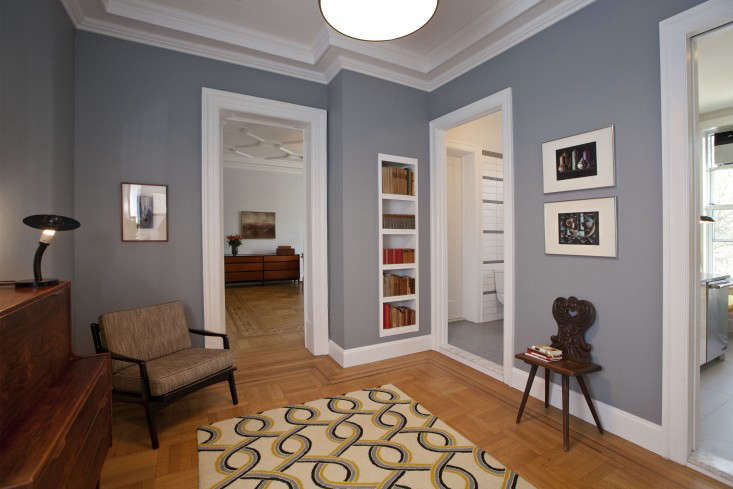 Above: The 1,150-square-foot apartment with ceilings over 10 feet high was originally part of a much larger apartment that had been carved up in the 1940s. In the current layout, the living room, bedroom, bathroom, and kitchen all radiate off the entry foyer, whose walls are painted in Gray Timber Wolf by Benjamin Moore. “We sought to redo the 1940s renovations with a keener eye toward the original proportions of the apartment,” Cohn says. “We raised the kitchen and bathroom door openings to match the original living room and parlor doors, converted a small closet into a display cabinet, and created a new stepped crown molding in keeping with the elaborate profile in the living room.” Family history speaks through the furnishings. The Danish modern rosewood bureau belonged to the client’s parents, the carpet is from Surya, and the midcentury black armchair is a family piece which the client had rebuilt and reupholstered. The chair on the right is a carved oak hall chair from Switzerland circa 1850–an heirloom from the client’s mother’s Swiss side of the family. 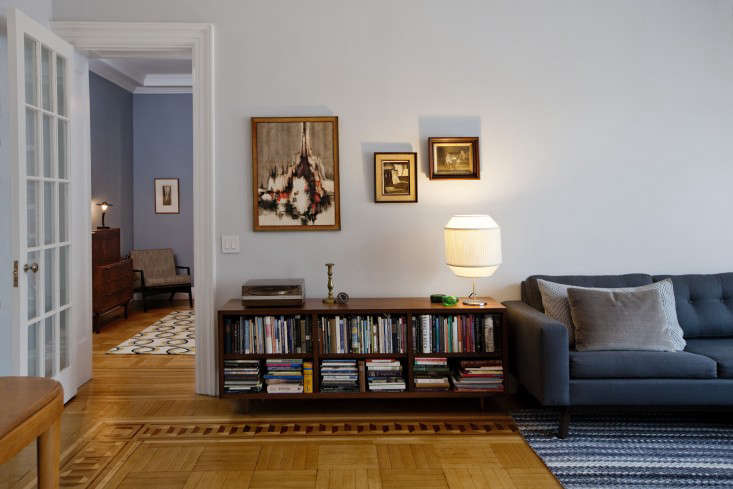 Above: Looking toward the entry foyer in the living room, Cohn designed a pair of low walnut bookcases based on a photograph from the client and details from a midcentury dresser in his own apartment. Along with a collection of works from fellow poets, the low storage unit is also home to the owner’s vintage record player. The walls in the living room were painted a “slightly more blue variation” of Marilyn’s Dress by Benjamin Moore. “We kept the background palette fairly subdued to allow the rich color and texture of the objects to take center stage,” Cohn says. The original parquet floors were repaired and refinished throughout in a more natural wood tone to bring out the marquetry borders. 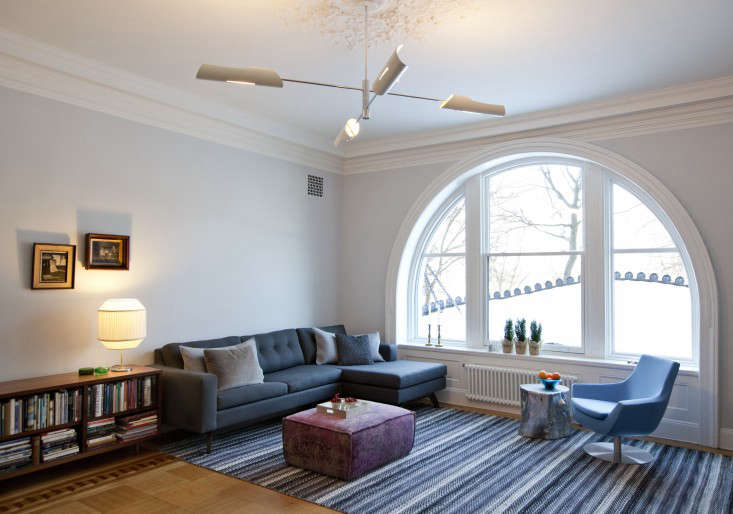 Above: Inspired by her parents, the client regularly entertains her friends in a salon-like setting in the living room. “The client’s existing furniture was mostly midcentury design, so we sought out complementary pieces from her parents’ furniture collection,” Cohn says. “And for the new purchases, we chose modern pieces such as the David Weeks Torroja Cross Chandelier in the living room that had some midcentury styling. We went for the larger version of this fixture so that it would fully inhabit the space.” 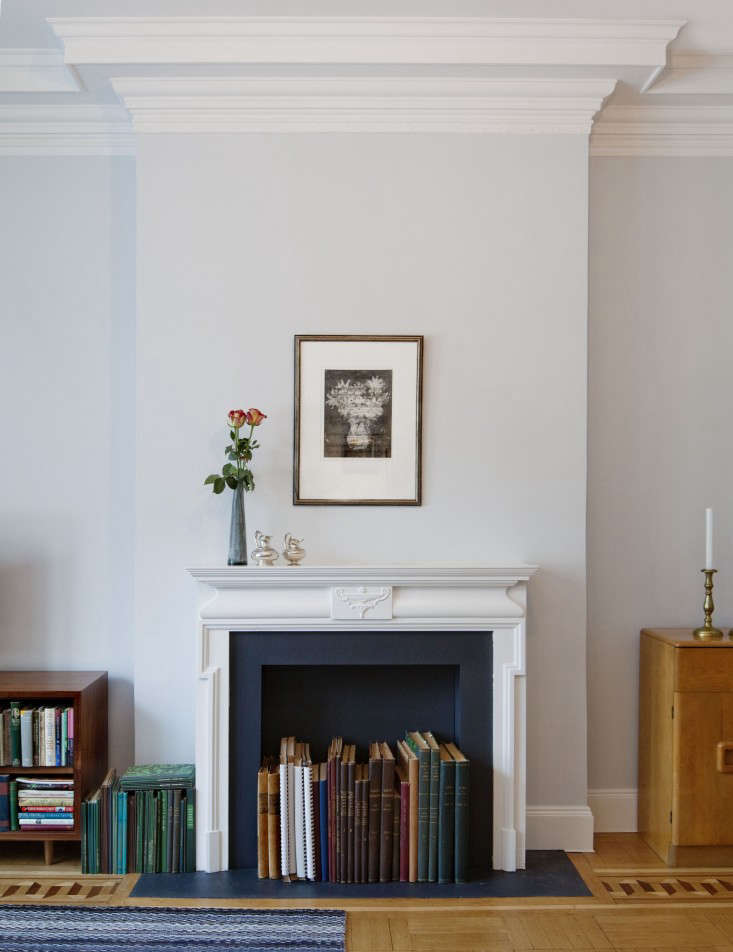 Above: The nonfunctioning fireplace with faux-marble facing and mantel was retained and repurposed by giving the facing a simple matte black finish, which has a slate-like appearance, and using it as a backdrop to display original orchestral scores composed by the client’s father, which he had bound in Italy. 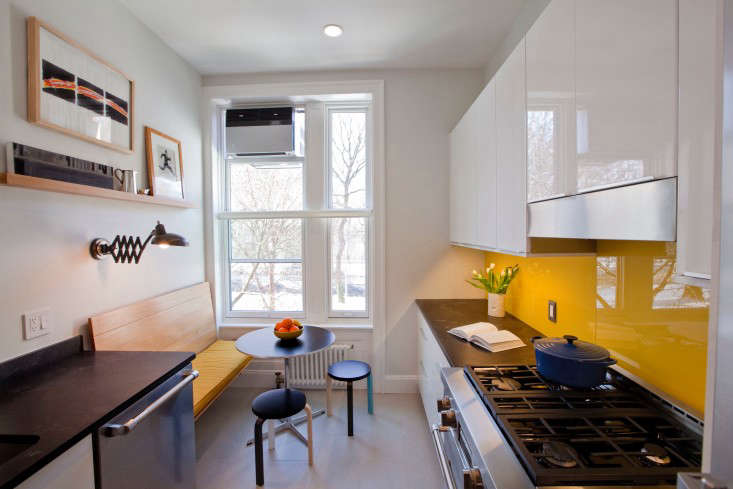 Above: A bold splash of custom yellow derived from the back-painted glass splash is inserted into the kitchen’s neutral background comprised of white walls and Ikea cabinets–a key factor in keeping the kitchen renovation within budget. “While it takes a fair amount of design and finesse, we have found that if you really embrace Ikea’s kit of parts and combine it with a few custom details, you can get quite close to the look of a fully custom kitchen,” Cohn says. “For example, rather than covering every inch of wall space with cabinetry, we kept most of the wall above the sink free of cabinets and left five feet by the window open for the built-in banquette.” 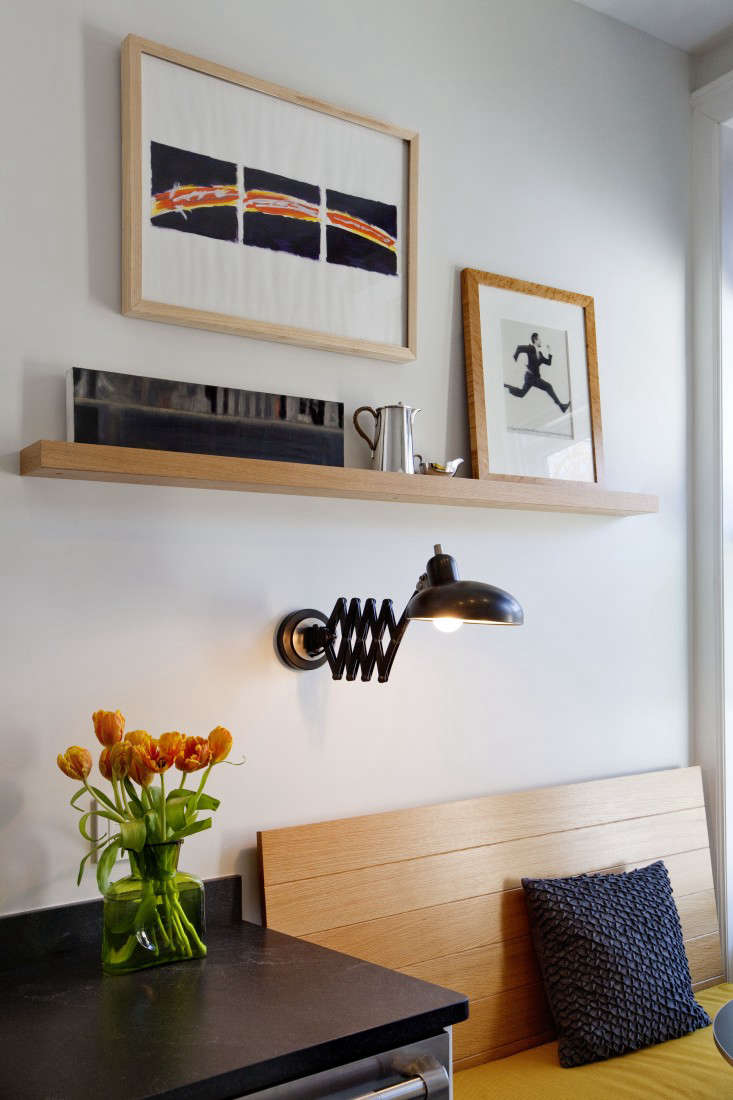 Above: The floating bench and narrow shelves were custom designed with a contractor from upstate New York, who used old oak beams that he milled down for the project. “The natural material with minimal detailing intentionally contrasts with the gloss cabinetry to bring warmth to the room,” Cohn says. An Accordion Modern Swing Arm Wall Sconce from Shades of Light provides adjustable task lighting over the bench, to which the client added a seasonal touch by having two seat cushions made with different materials, which she rotates according to the time of year. The photograph on the shelf is by German photographer Marco Breuer, and the two adjacent paintings are by the client’s friend, the painter Matthias Leutrum. 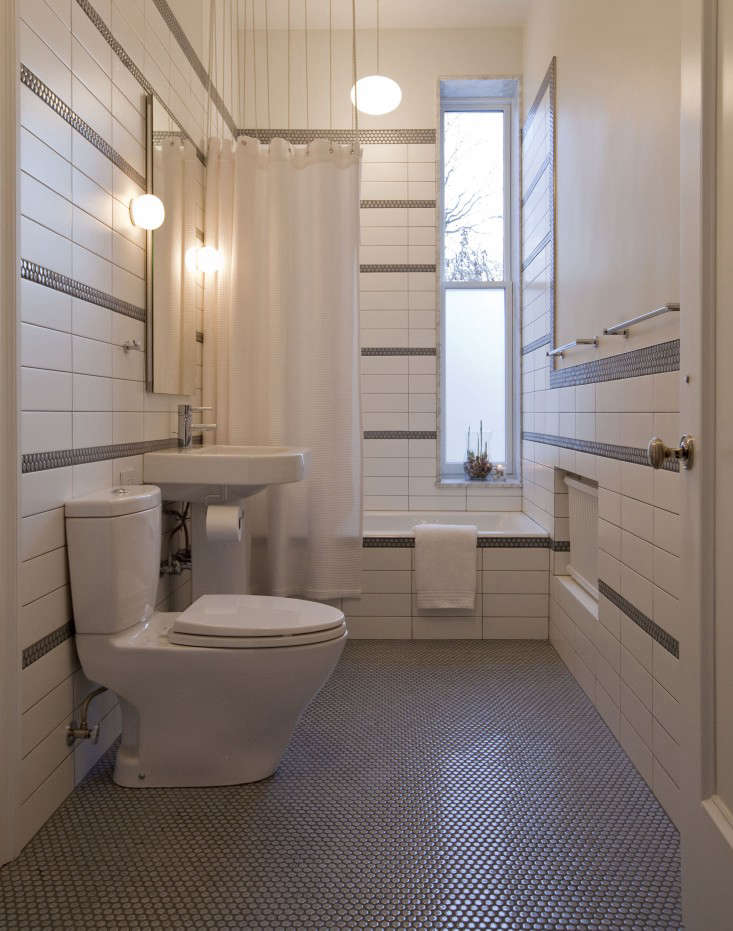 Above: The awkward proportions of the narrow bathroom with tall ceilings were managed with the decorative double rows of Penny Round Tiles from American Universal Corporation that wrap around the room. The blue-gray tiles, which are the same as the ones use on the bathroom floor, tie in with the paint colors used in the rest of the apartment. The shower curtain hangs from a surface-mounted hospital curtain track using beaded chains, which take up the difference in a bathroom with a lower ceiling height. 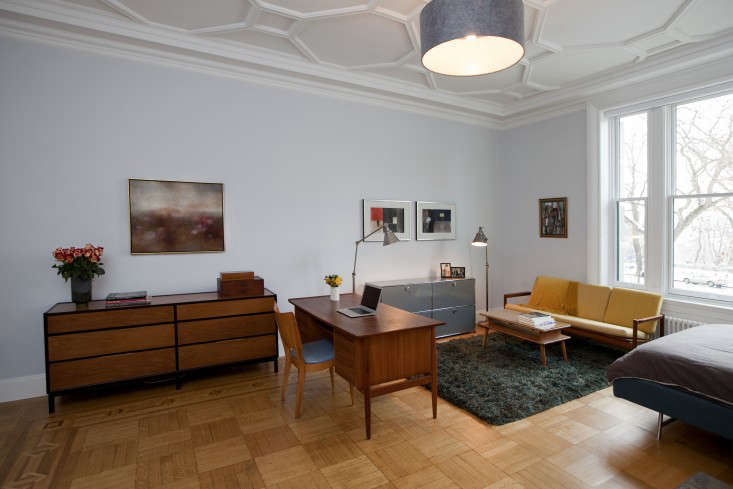 Above: The bedroom is large enough to also function as the client’s writing studio. The two areas are defined by the furniture layout. The midcentury desk, couch, and wood credenza are from Beall & Bell, in Greenport, Long Island, New York, the Gray Haller Credenza is from USM Modular Furniture, and the carpet is from ABC Carpet & Home. The art above the wood credenza is an abstract Ophelia by Bernard Perlin, from the client’s collection. 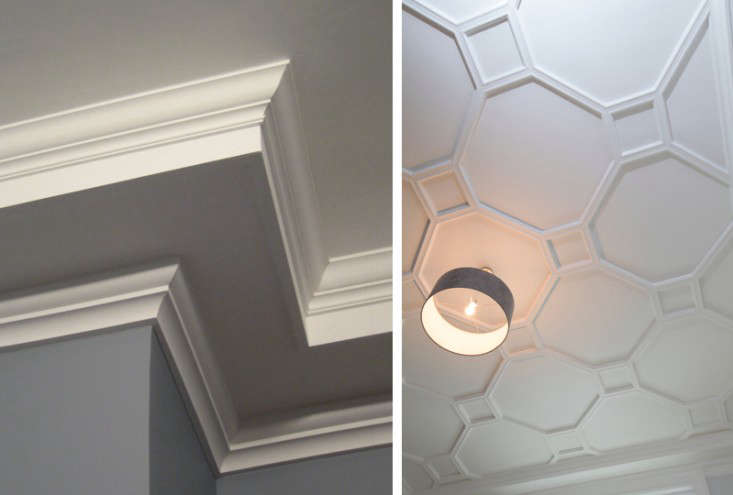 Above L: A detail of the new stepped crown molding, which Cohn designed to be in keeping with the elaborate profile in the living room. Above R: The original ceiling was cleaned up and restored. 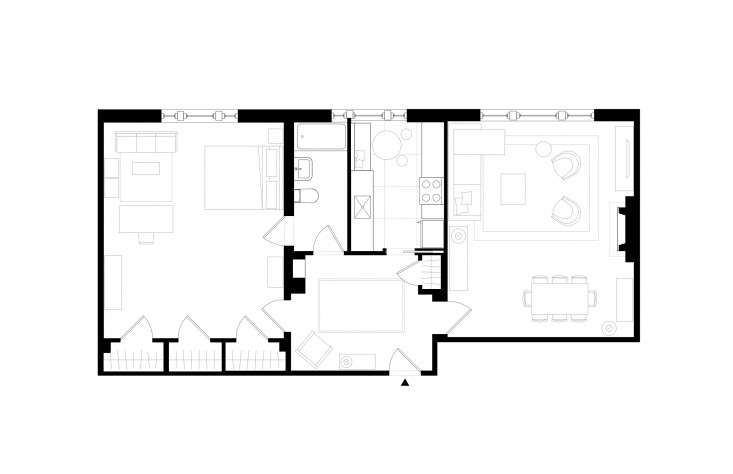 Above: A floor plan of the apartment shows how all the rooms radiate off the entry foyer. 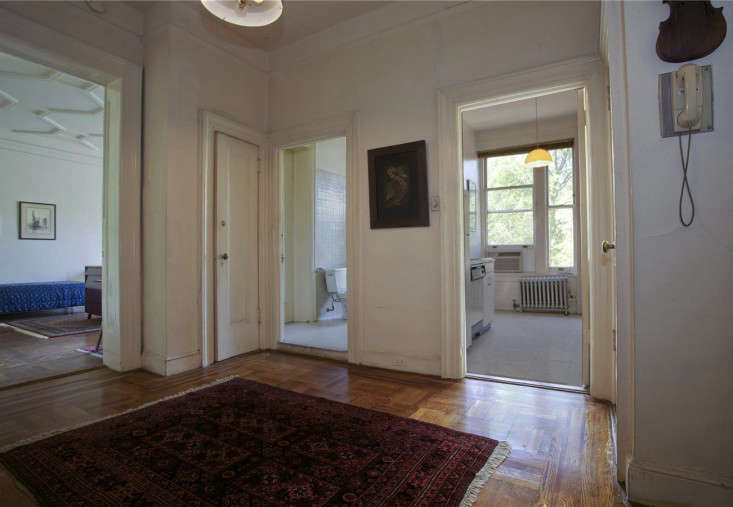 Above: The Before image of the entry foyer shows the small closet that was turned into a display case and views into the bathroom and kitchen. 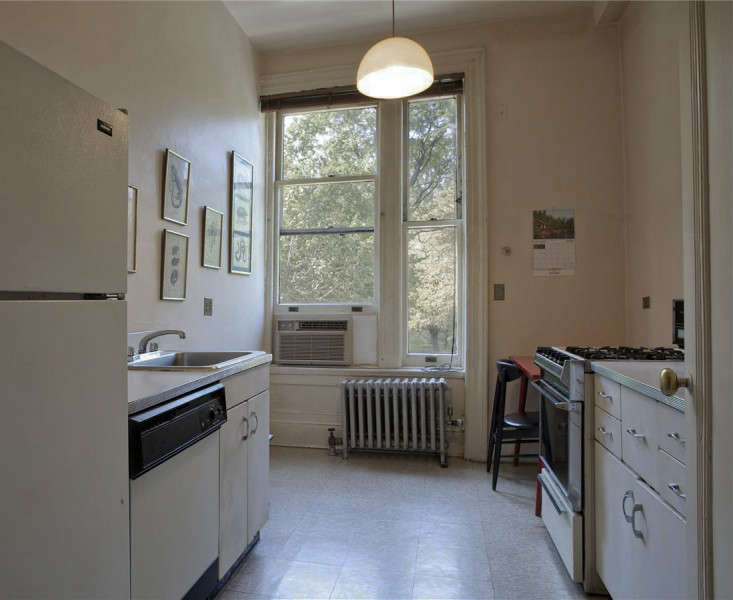 Above: In contrast to the original footprint of the living room and bedroom, the kitchen (above) and bathroom had been carved out of the original section of the 1940s renovation, resulting in spaces with awkward proportions and dated fixtures and finishings. The architect and client agreed from the beginning that these two spaces would be completely gutted and made modern.

See what architects Platt Dana Architecture did with a prewar apartment on New York City’s Upper East Side in The Architect Is In: Making the Most of Your Floor Plan.

$189.00 USD from Shades of Light
Chandeliers