This week, San Francisco architect Mark Reilly takes us on a tour of a historical house he renovated in Palo Alto, California. He is available for the next 48 hours to answer and any and all questions. Ask away!

Reilly’s client (only the third owner) of this 1927 Colonial Revival house and guest cottage was seeking to upgrade her beloved home and guest cottage. The project was all about capitalizing on the strong bones of the two structures (designed by noteworthy Bay Area architect Charles Kaiser Sumner, who had worked for the legendary New York firm McKim, Mead and White at the turn of last century). A member of the Remodelista Architect and Designer Directory and the founding partner of Mark Reilly Architecture, Reilly’s respectful design approach brings in an abundance of natural light, improving on the two buildings’ relationship to the outdoors. Mixing vintage and modern materials; upgrading fixtures and surfaces; and improving building systems and building efficiency; Reilly’s considered renovation builds a solid bridge from the past to the future. 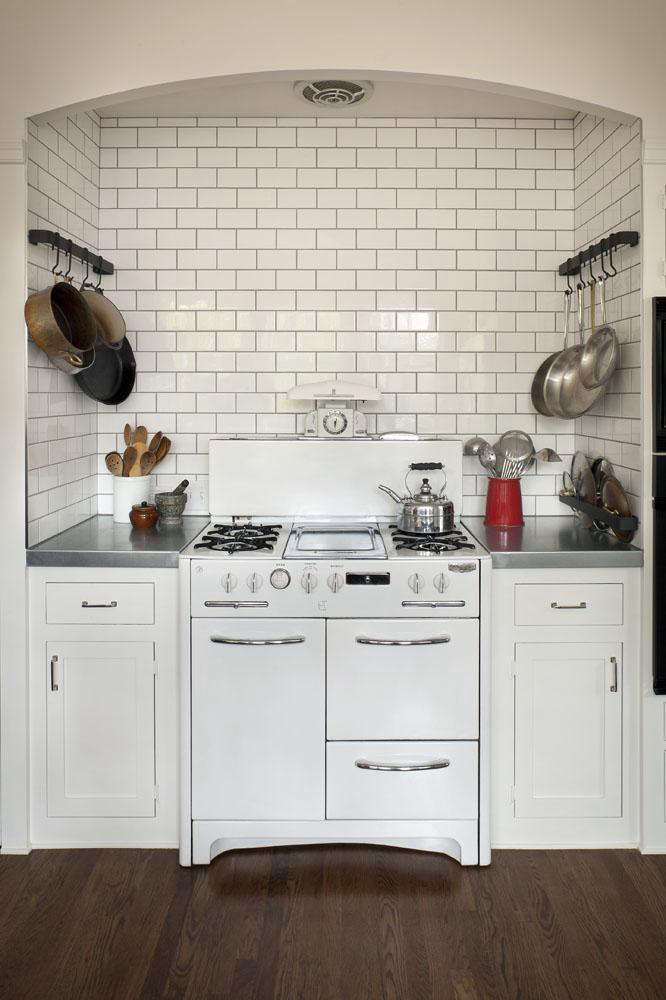 Above: The existing cooking niche in the kitchen is a good summary of Reilly’s approach to the renovation. “The vintage Wedgewood stove and base cabinets within the niche were kept to maintain the existing style of the house but were refurbished to give them a crisp, new look,” Reilly says. “The stove’s porcelain and chrome were restored, and bright white paint and chrome pulls were added to the cabinets.” 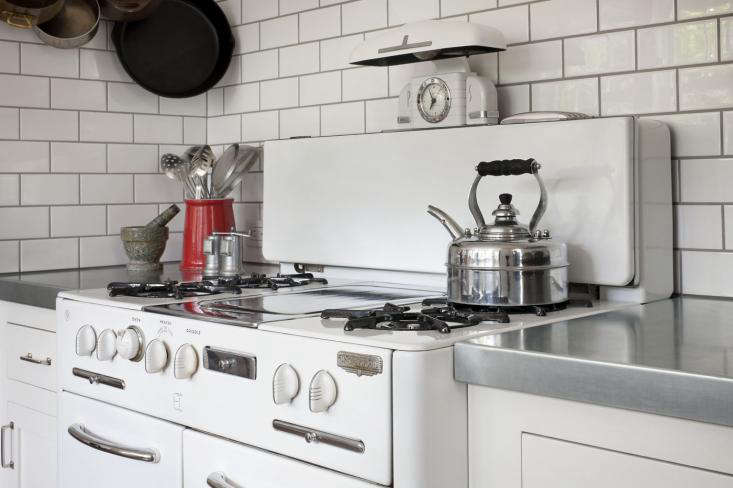 Above: Reilly added zinc counter tops with thick square fronts to create a classic, but modern heat resistant surface on each side of the range. 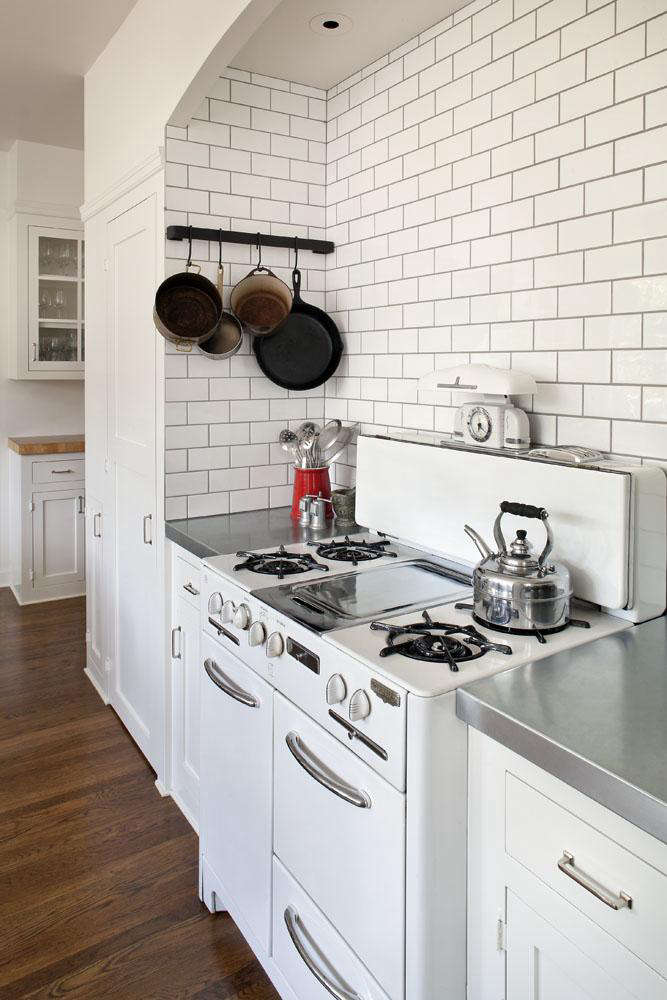 Above: The running bond tile pattern of the 3×6 subway tiles has been set off with gray grout. The architect tweaked the detailing of the tiles to give the classic tiles a modern twist. “Traditionally, the ends of subway tile are finished with quarter round or bull nose tile,” says Reilly. “For this project, I had the outside ends of the tile die into “L” shaped metal strips that hide the edge of the tile to give it a clean more modern aesthetic.” 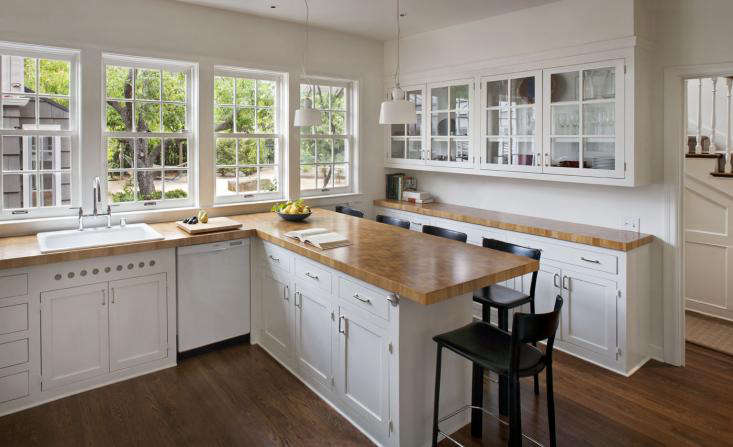 Above: A series of small design moves update the kitchen for modern use. The base cabinets were repurposed with white paint and new chrome pulls. Complementary new glass-faced upper cabinets were designed in keeping with the base cabinets and aligned with the adjacent windows, creating reflected light and unifying the visual appearance of the kitchen. The existing linoleum floors were replaced with new oak floors to relate to the rest of the house improving visual flow. 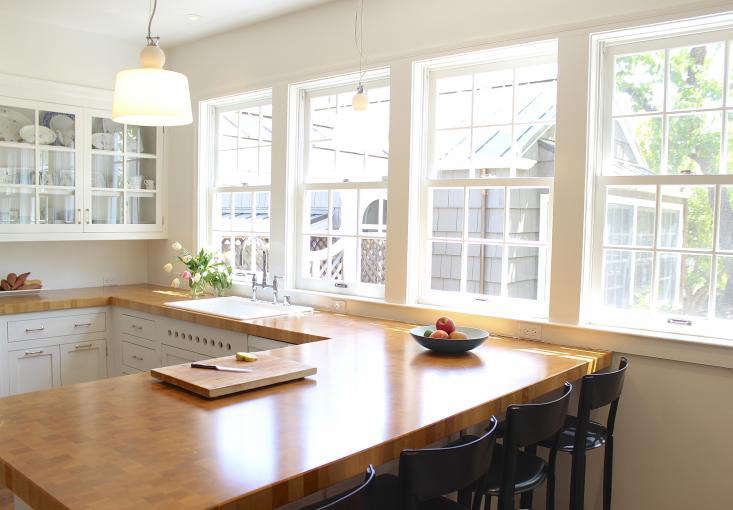 Above: “For the counter top which was originally formica, the client wanted a material that didn’t ‘clink’ when glass or serving ware was placed on it,” Reilly says. “After exploring several options, we decided on end grain butcher block because of its warmth, soft feel and vintage-inspired look.” Photograph by Mark Reilly. 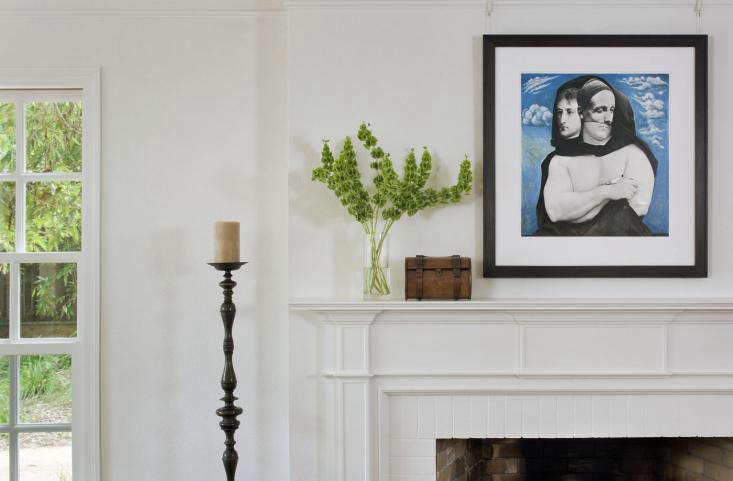 Above: In the living room, the architect added new windows to improve the connection with the garden outside and to bring in more natural light. The fireplace mantel was restored and painted white like the walls. 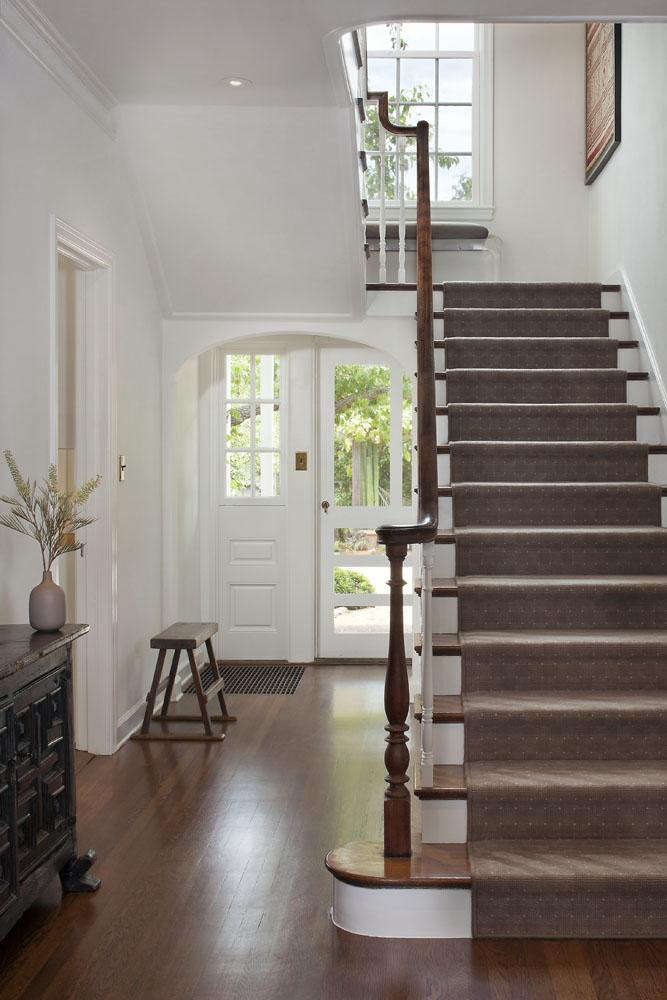 Above: “The entry stair was preserved out of respect for the existing home,” Reilly says. “To brighten this formerly dark space, curtains were removed from the south facing stair window, and recessed can lights were added; crisp white paint further brightens the space and connects it to the rest of the house.” 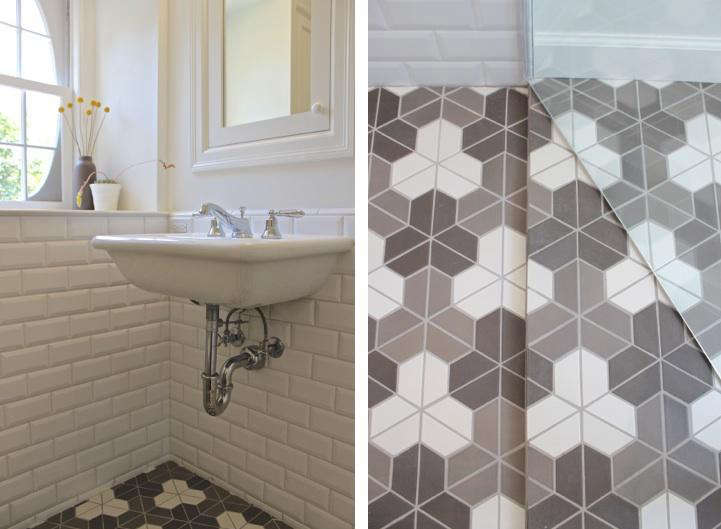 Above: The tiles in the bathrooms of both the main house and the cottage is a play of the classic combination of subway tile and hexagonal floor tile, a popular tile combination in buildings of the late 20’s. Reilly updates the look with beveled subway tiles and a a subtle neutral palette in the Dwell Half Hex Tiles from Heath Ceramics. 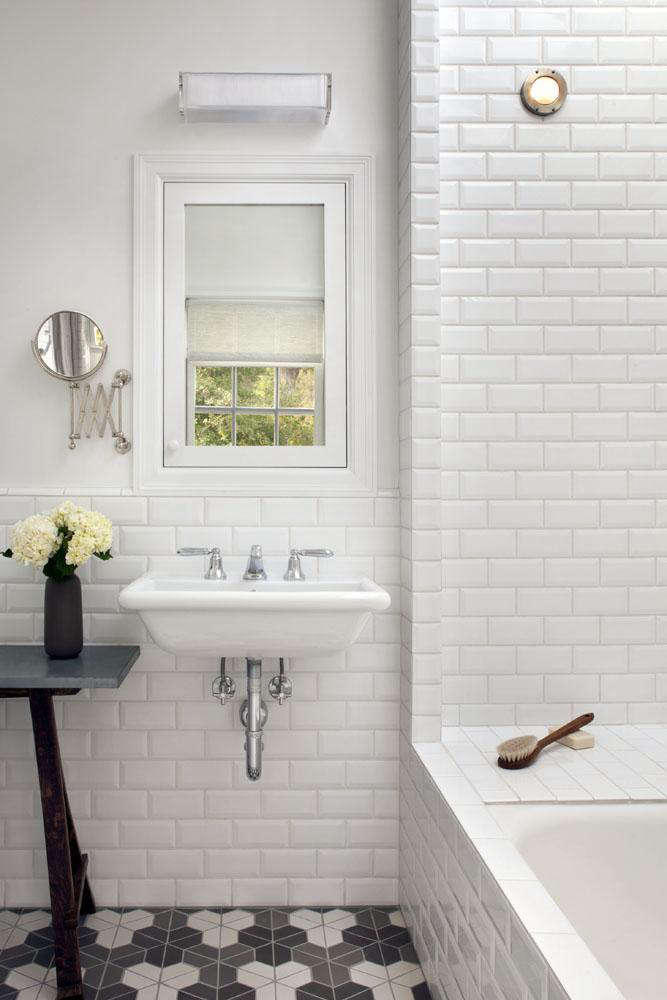 Above: The cottage bathroom is comprised of a mixture of old and new elements. The considered placement of the medicine cabinet (centered on the existing window behind), which was designed to match an existing one in the main house, means a view of the garden and more natural light is made available to the bathroom.  The wall mounted sink with exposed drainpipe was inspired by a sink in the Berkeley City Club designed by Julia Morgan while the light fixtures On the Rocks by Flos above the sink and Recessed Luminaire by Bega on the bathtub wall are modern in feeling. 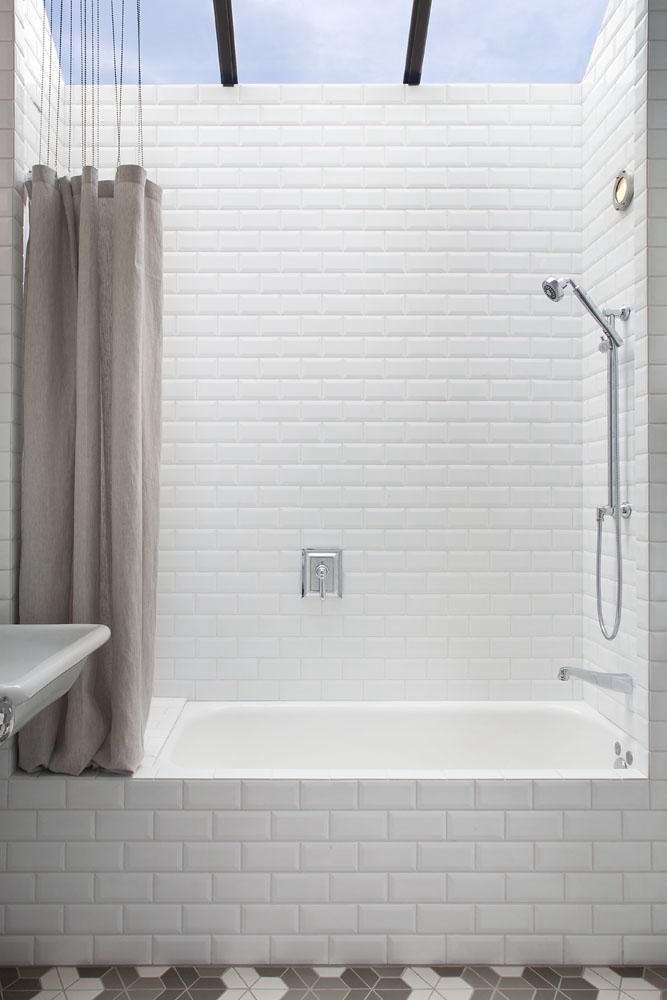 Above: In the small footprint of the cottage bathroom, Reilly introduces copious amounts of natural light through a custom wall-to-wall skylight over the entire shower and tub area, making it feel bigger and brighter. “The skylight was sized so the wall tile could run up to the glass and hide the skylight frame,” Reilly says. 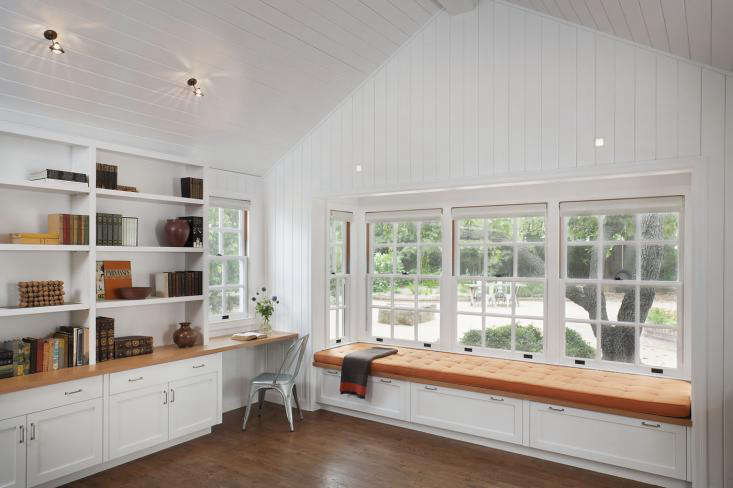 Above: In the living room and bedroom of the guest cottage, Reilly raised the ceiling to the roof framing and added the bay window to make the space seem more spacious within the same footprint. “When you are sitting (or napping) in the new window seat, you feel like you are part of the garden,” Reilly says. Photograph by Mark Reilly. 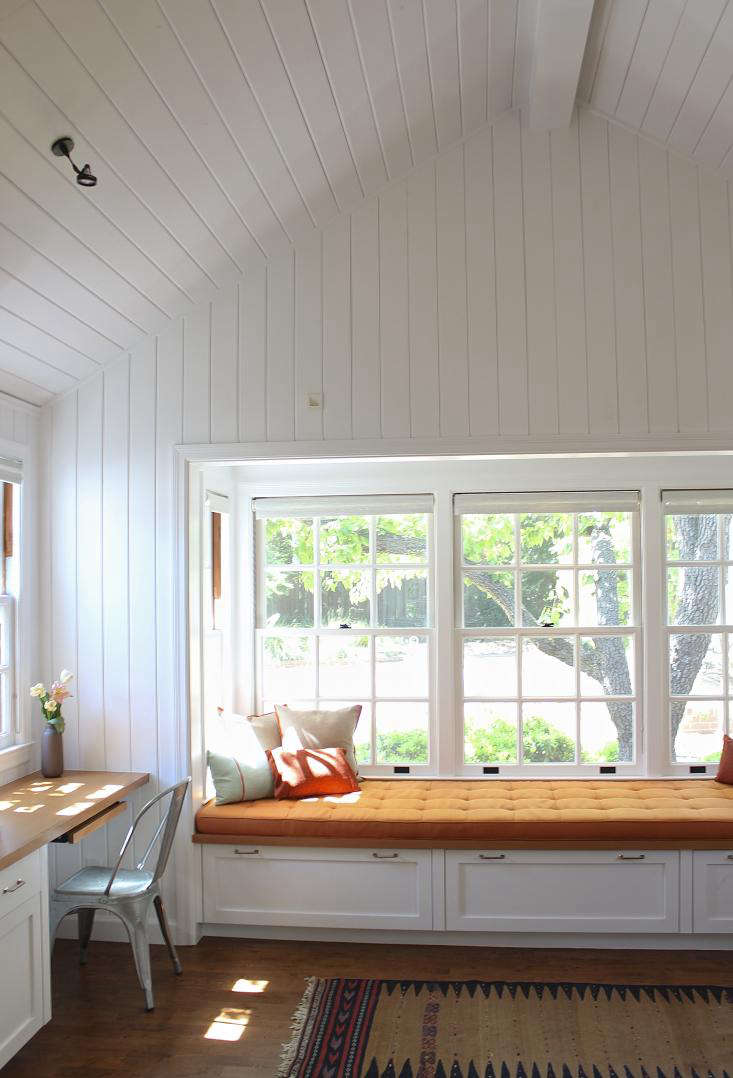 Above: “We clad the cottage walls and ceiling in V-groove painted boards to add texture and reference the outbuildings from this era,” Reilly says. Photograph by Mark Reilly. 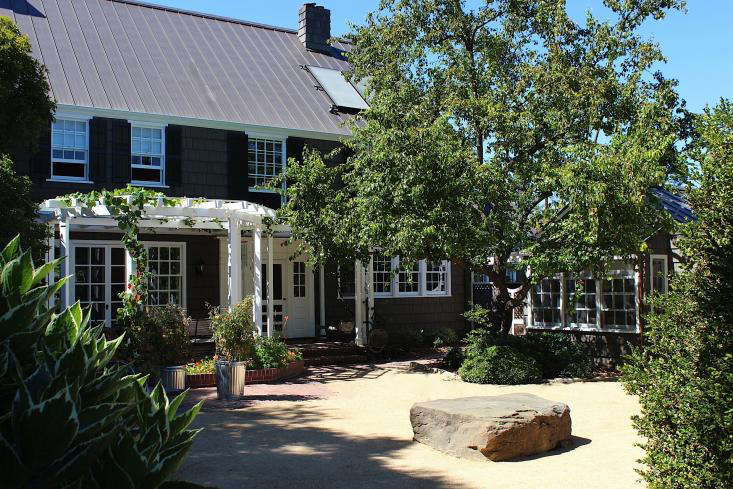 Above: A view of the rear of the house with its garden shows the new standing seam metal “cool” roof which is energy efficient and long lasting while providing a good base for the new solar hot water panels which would have been difficult to install within the existing uninsulated shaker roof. The new bay window and window seat which were added to the guest cottage can be seen in the far right of the photos. Photograph by Mark Reilly.

Our Remodelista Architecture and Designer Directory members abound in design expertise and knowledge. See 28 back posts of The Architect or Designer is In to access all that they have to offer.

Expert Advice: 10 Secrets from the Girls from Food 52