Julie had just arrived in New York last fall, and we were en route to the office when we ducked into a nice-looking coffee place. “What’s that library?” she said, peering through closed glass doors in the back. Neither of us realized we had wandered into the Museum of Sex canteen, a cafe by day and lounge and bar by night–complete with illicit stacks.

Photographs courtesy of the Museum of Sex 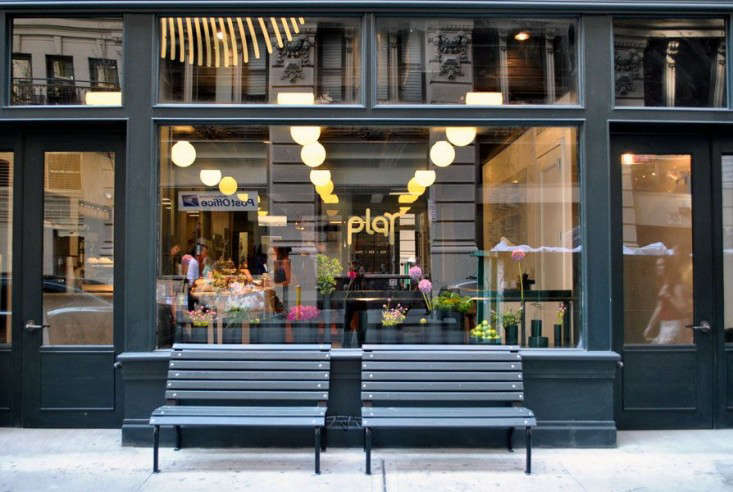 Above: The outside looks like a demure, well-designed cafe. The building dates back a century or so, and the project architect, Eric Mailaender of Resistance Design, recreated the original storefront using old tax record photos (and pleasing the landmarks commission).  It’s located at 1 East 27th Street, and you’ll notice there’s no mention of the Museum of Sex, which is around the corner on Fifth Avenue, next to our office. 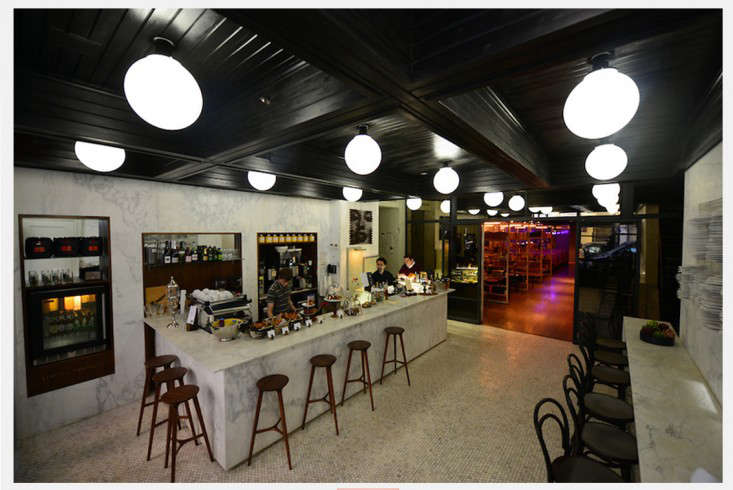 Above: The Nice & Sweet Cafe lives up to its name. It has a Calacatta marble counter, Studio Dunn stools, a V-groove wood ceiling–and in the distance a curious red glow. 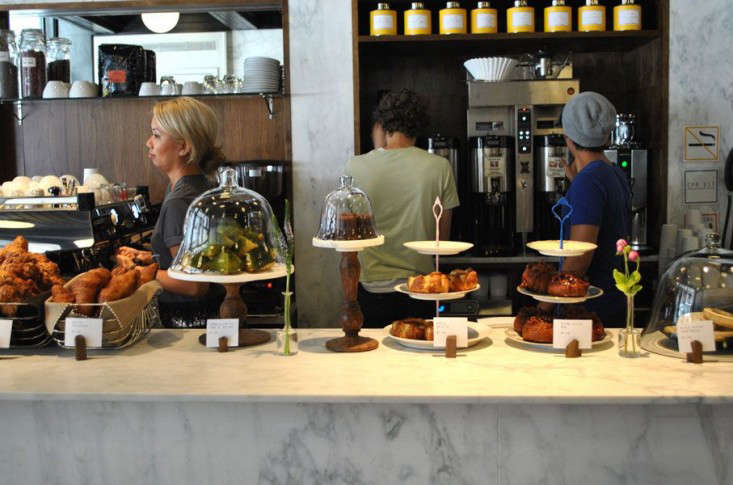 Above: The counter is nicely detailed with a knife edge. Under the large cloche, the mossy looking offering is lemon olive oil cake with matcha. “The idea was to create a stylish, straightforward cafe that would attract locals,” says Mailaender. 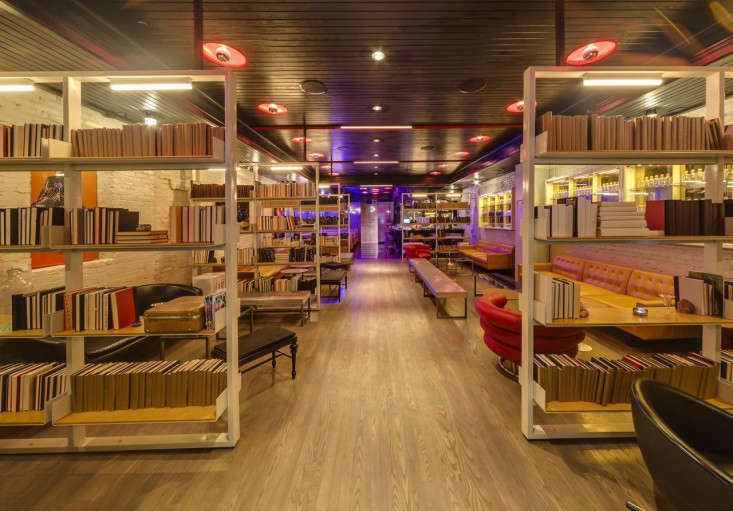 Above: Cross the border from the cafe into the library and you quickly realize this is no ordinary study area–it’s Play, the MoSex (as the Museum of Sex is known) lounge and bar. But it wasn’t finished during our first visit, and we weren’t allowed in; I had to wait a few months to fully investigate. 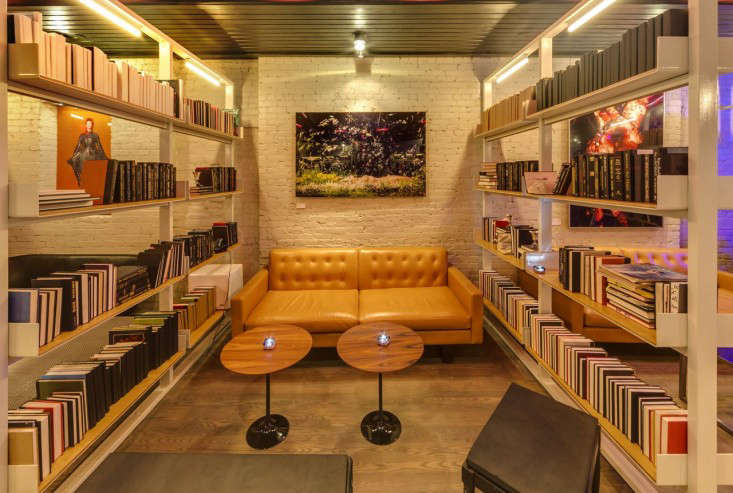 Above: The lounge presents a series of intimate seating areas cleverly sectioned off by custom-built steel shelving detailed with plywood. Each set of stacks has its own mix of art and furniture, including comfy leather sofas and uncomfy piano benches purchased on Ebay and finished with black neoprene on top. The books have white, black, and kraft paper tape applied to the spines to give the collection a look of continuity–and to surprise the curious (the random volume I opened was called Hot Sex: How To Do It). Some of the walls have inset brick-size video screens playing lewd loops. 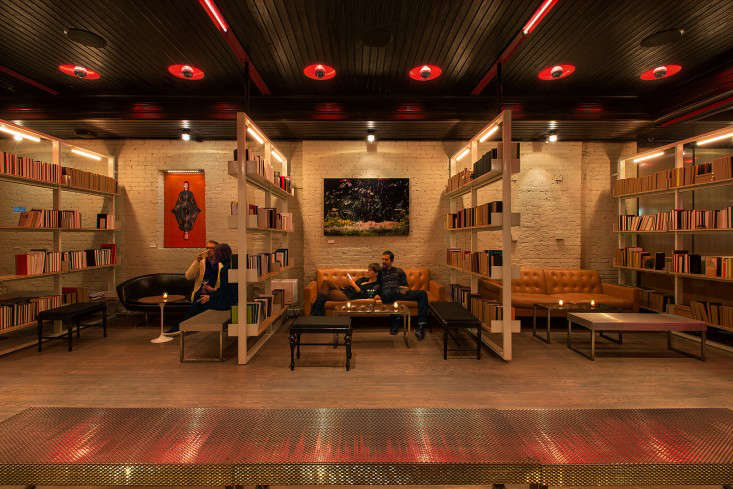 Above: The place has a distinctly night vibe even by day–note the woven steel benches and the shift in the paneled ceiling lighting from the cafe’s glass globes to inset red circles with half chrome bulbs. I turned to Mailaender for a translation and he explained: “We thought of the progression from the street towards the back of building as a striptease of sorts, starting off demure and respectful and then getting sexier. It’s a process of gaining intensity, gaining complexity in style, losing sobriety and some norms, until you reach a more ‘trippy’ and hotter experience at the bar.” 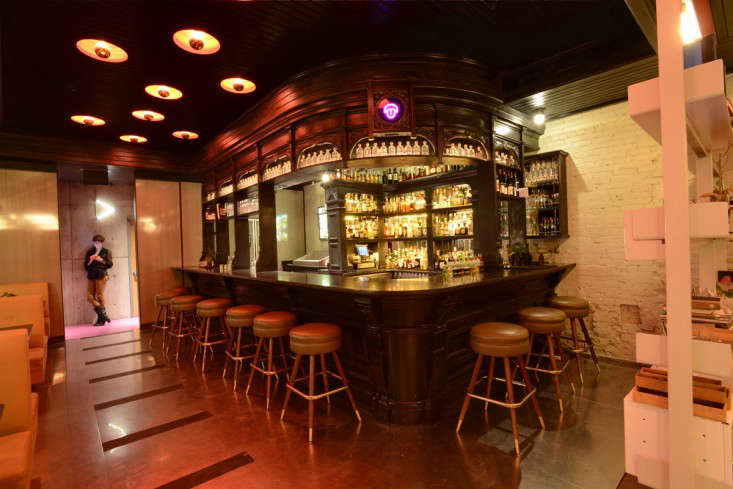 Above: Losing sobriety: situated at the far corner of the lounge, the carved mahogany bar originally stood in an old pub in the UK. Daniel Gluck, owner of the lounge (and the museum) acquired it even before hiring Mailaender–it came with the job, and Mailaender says he liked making it work in the scheme. One of the ways he did that was by bringing the ceiling soffit down to meet the shelving, so that it looks built in. An inset LED, an icon of a tongue, is the tiny detail that ushers the bar into the 21st century. 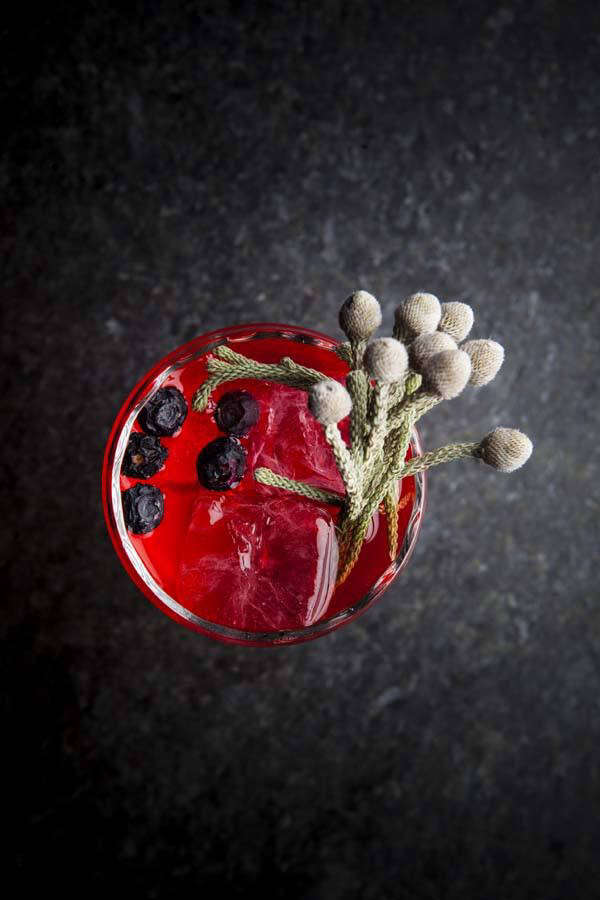 Above: The bar specializes in elaborate aphrodisiacs. This concoction, Korovazon Milk Punch, is made from hibiscus tea-infused Pisco, cinnamon bark, vanilla, ginger, and lime, among other things. 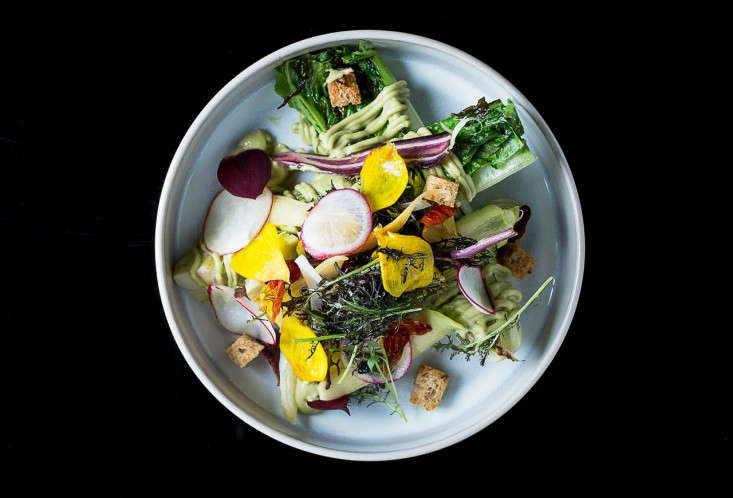 Above: The food, too, is intended to trigger the senses. 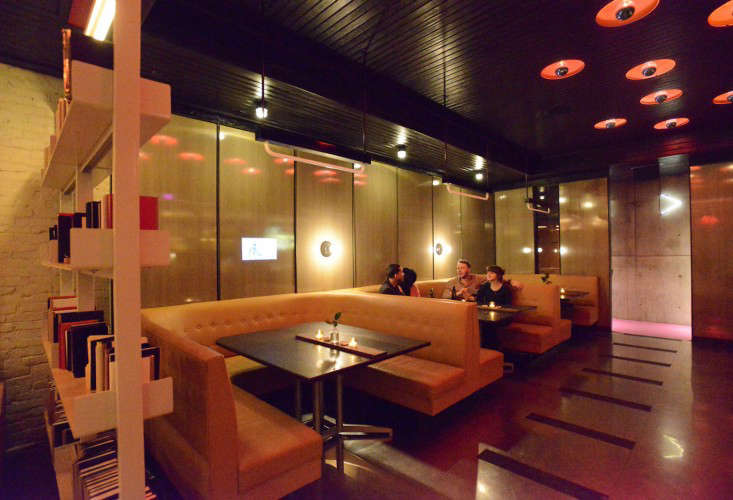 Above: To encourage shared seating, the leather banquettes opposite the bar are deliberately outsized (they hold eight). The walls are paneled in Nevamar, a midcentury laminate in a green-gray wood-grain pattern that lends this side of the room a wayward diner look. 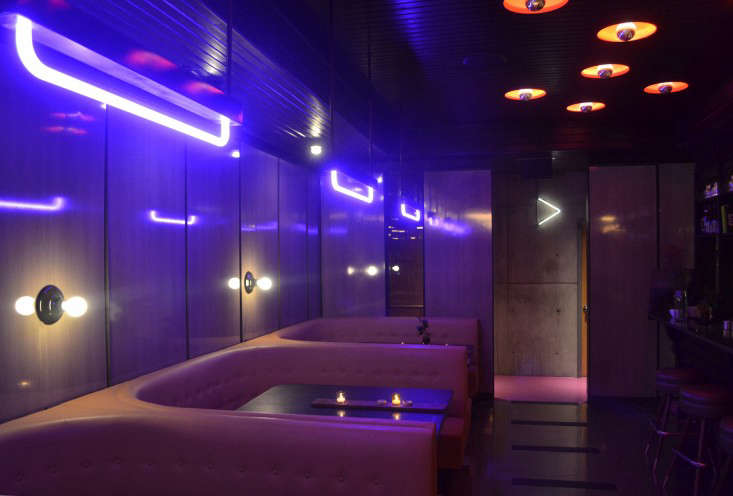 Above: The bar’s neon night lights. 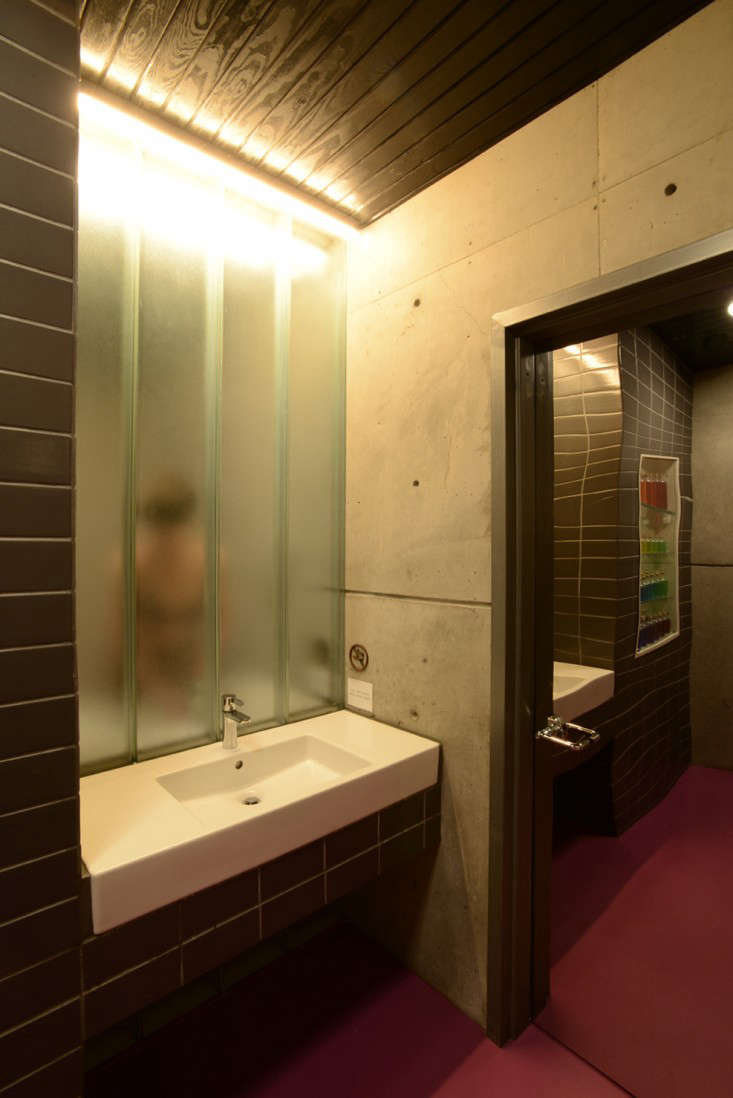 Above: There are two bathrooms at the far back simply labeled No. 1 and No. 2. Their sinks are divided by layers of structural glass that offer a glancing view of the person at the basin on the other side. And to make up for the lack of wall mirrors, the doors are clad in polished stainless steel. To see and learn more, go to Play.

Our New York City Travel Guide is filled with more restaurants, hotels, and shops to check out, including A Sugar-Coated Confectionary, perfect if you’re in the market for inspired Valentine’s Day candy.

The Debrief: 8 New Classics for Your Underwear Drawer

Design Travel: “The Dedication to Making Things Well” at Shiguchi in Japan

Brücke 49: A Perennial Design Favorite in Vals, Switzerland, 10 Years On