When Bob and Michele Conrad embarked on a house hunt in the Seattle area, they came with a few unusual requirements. In addition to a place roomy enough for their family of five—and squarely within their budget—Bob, a former pro golfer who’s now in commercial real estate, wanted to put in a secluded putting green. And Michele, a Microsoft alum and marketing consultant, was looking for a particular vibe: “Tons of windows and a feeling of peace: A few years ago I was diagnosed with third-stage breast cancer; after that experience we strived for a simple, uncluttered, clean lifestyle and wanted to be surrounded by nature.”

Builder Todd Lozier was in the midst of gut renovation of a modernist 1966 Ralph Anderson design in the Clyde Hill neighborhood of Bellevue, Washington, when the Conrads took a look and snapped up the construction site. With interior designer Lisa Staton and Todd’s team at Lochwood-Lozier, they preserved the midcentury exterior while doubling the size (from approximately 2,000 to 4,000 square feet) and recasting the house in their own image, golf and greenery included. See the outdoor living setup on Gardenista. And join us for a tour of the updated interior, a high-ticket project that’s filled with cost-conscious good ideas. 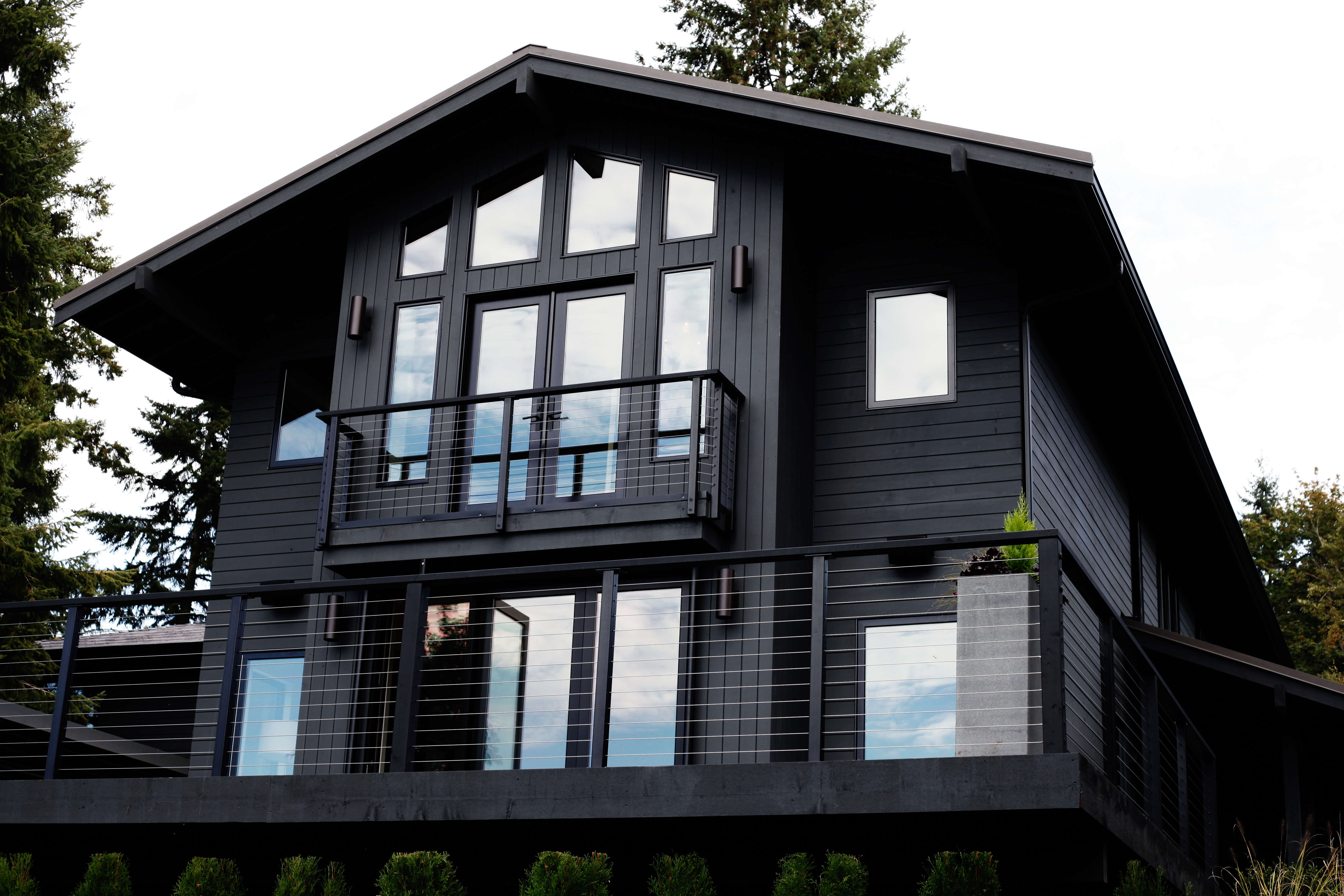 Above: “Ralph Anderson crafted his designs to blend with the Northwest landscape: hovering protective rooflines, exposed framing, and an emphasis on verticality was his signature,” says Lisa.

Though the team entirely reimagined the interior, they kept the 1966 exterior intact—while introducing all new windows and painting the house charcoal (Sherwin-Williams Iron Ore). The major addition is a garage and mudroom wing with children’s bedrooms (see floor plans below). 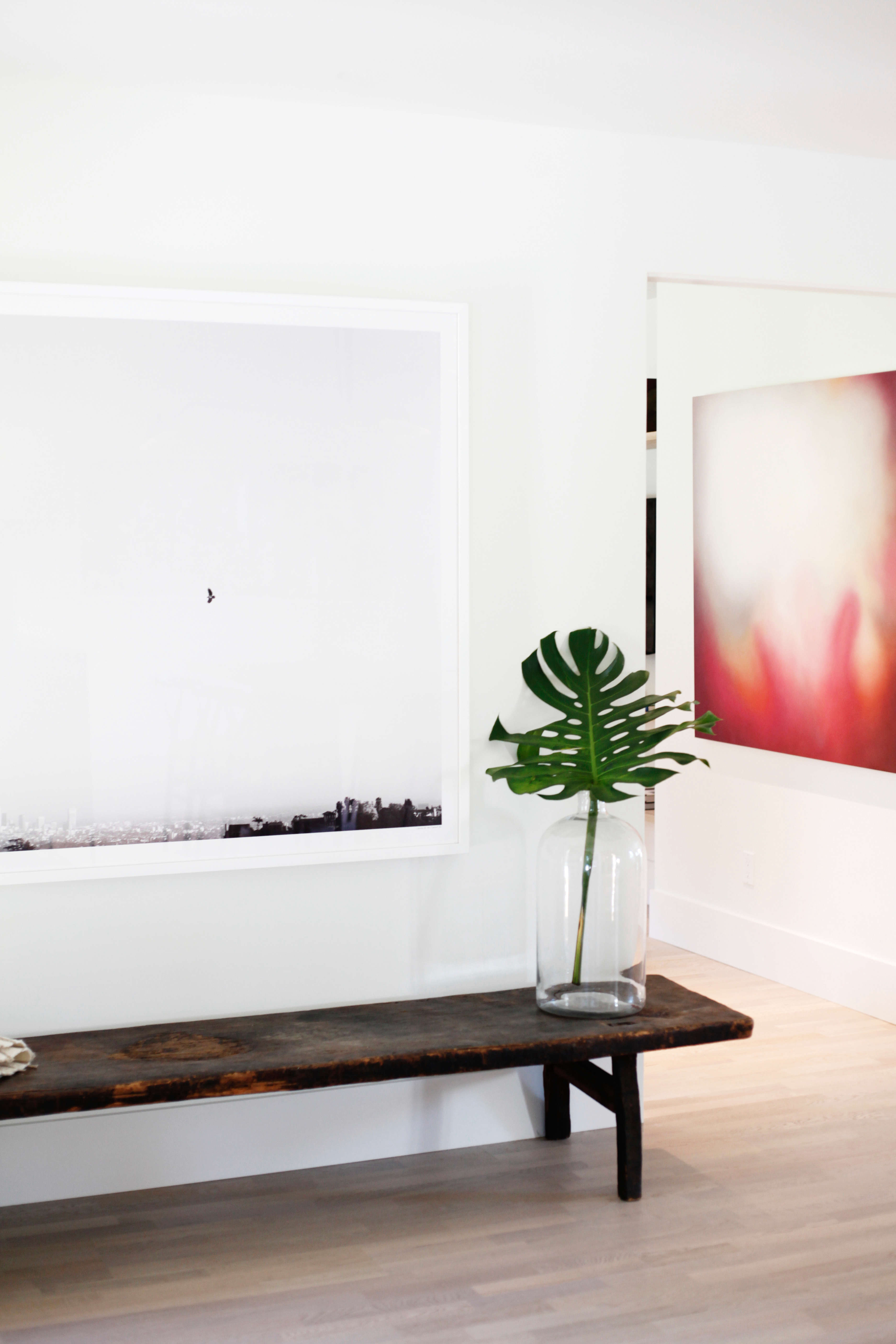 Above: “We got rid of a ton clutter and unnecessary household things with several trips to Goodwill and Craigslist posts,” says Michele, who requested “an airy and open look.” In response, the team decided to rethink the house in “a modern Scandinavian way, capitalizing on sunlight throughout the year.”

Shown here, a rustic Chinese bench on pale oak flooring—”economical, prewashed Brushed Oak Dune from Kentwood”—in the entry. The black-and-white photo is by George Bryne and the painting is by Tracy Rocca. 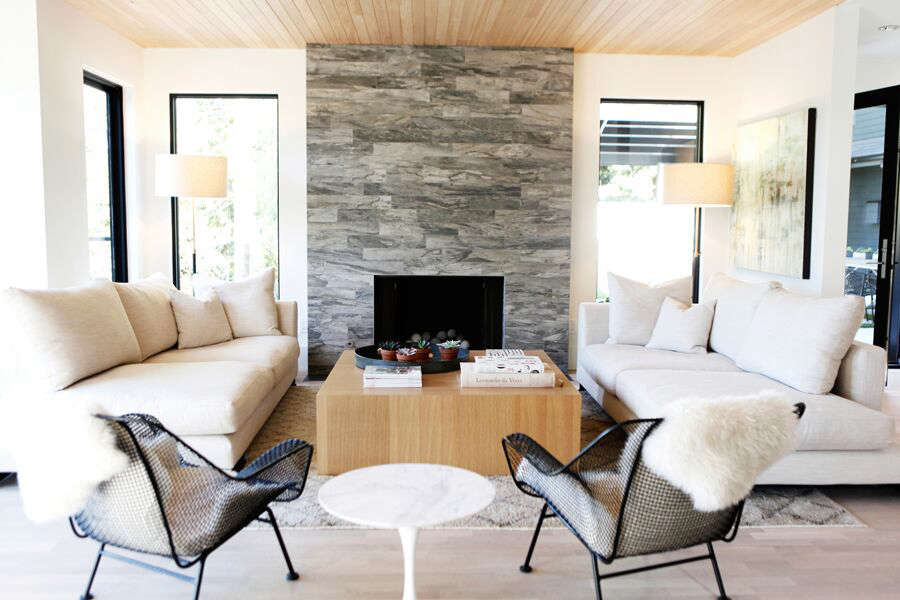 Above: “We wanted the look of board-formed concrete but used porcelain tile to achieve it on a budget,” says Lisa of the living room’s original fireplace. It’s faced with Kauri, an Italian porcelain tile in a petrified wood pattern.

“For the furnishings, we choose several classic midcentury pieces and then mixed them with modern upholstery, ethnic rustic pieces, and budget-friendly items from West Elm, CB2, et cetera.” The sofas are the Lazy Time Sectional from Camerich, Lisa’s “favorite source for Italian-style sofas at a fraction of the price.” 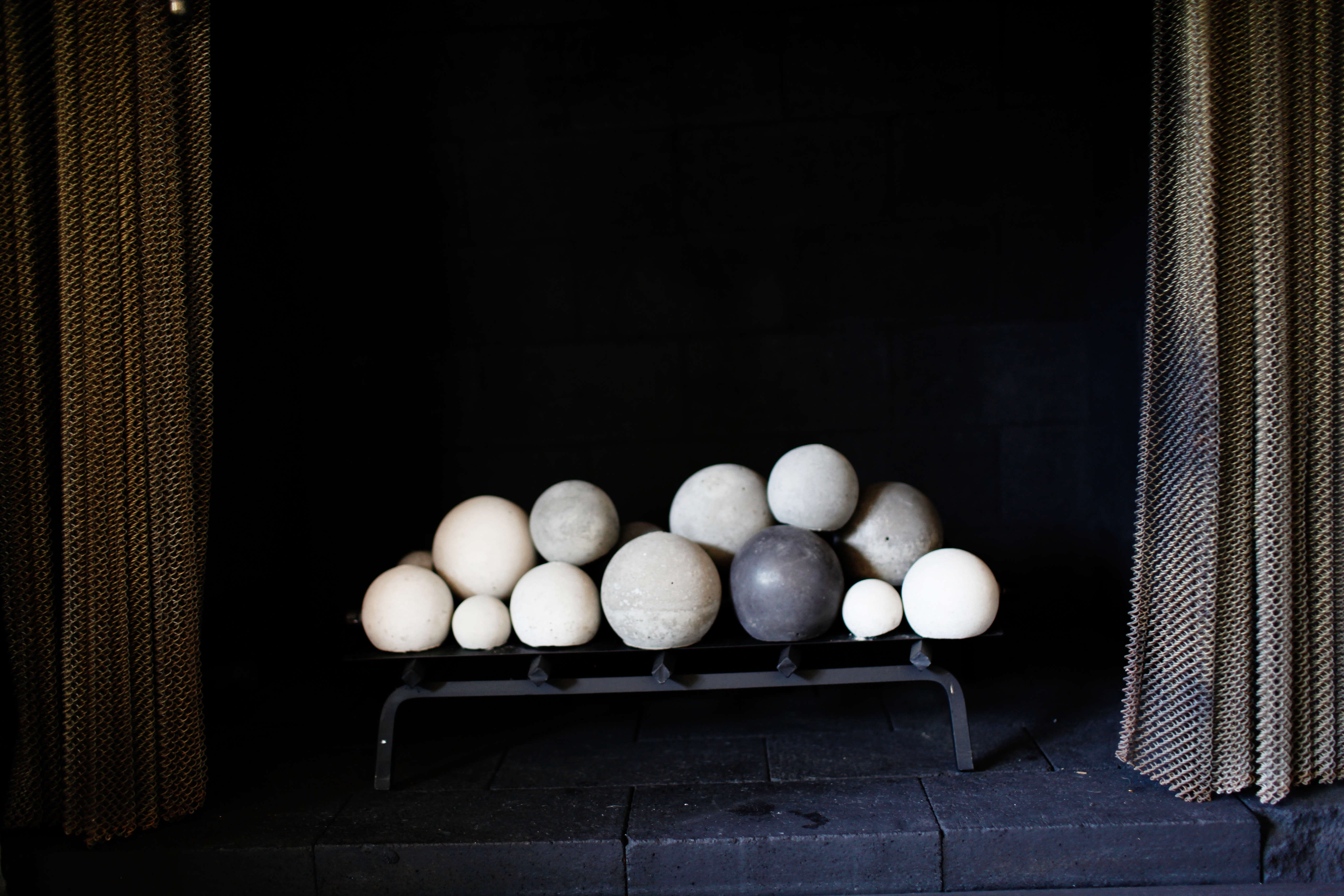 Above: A good alternative to faux logs: RH Peterson’s Fyre Spheres in the gas fireplace. 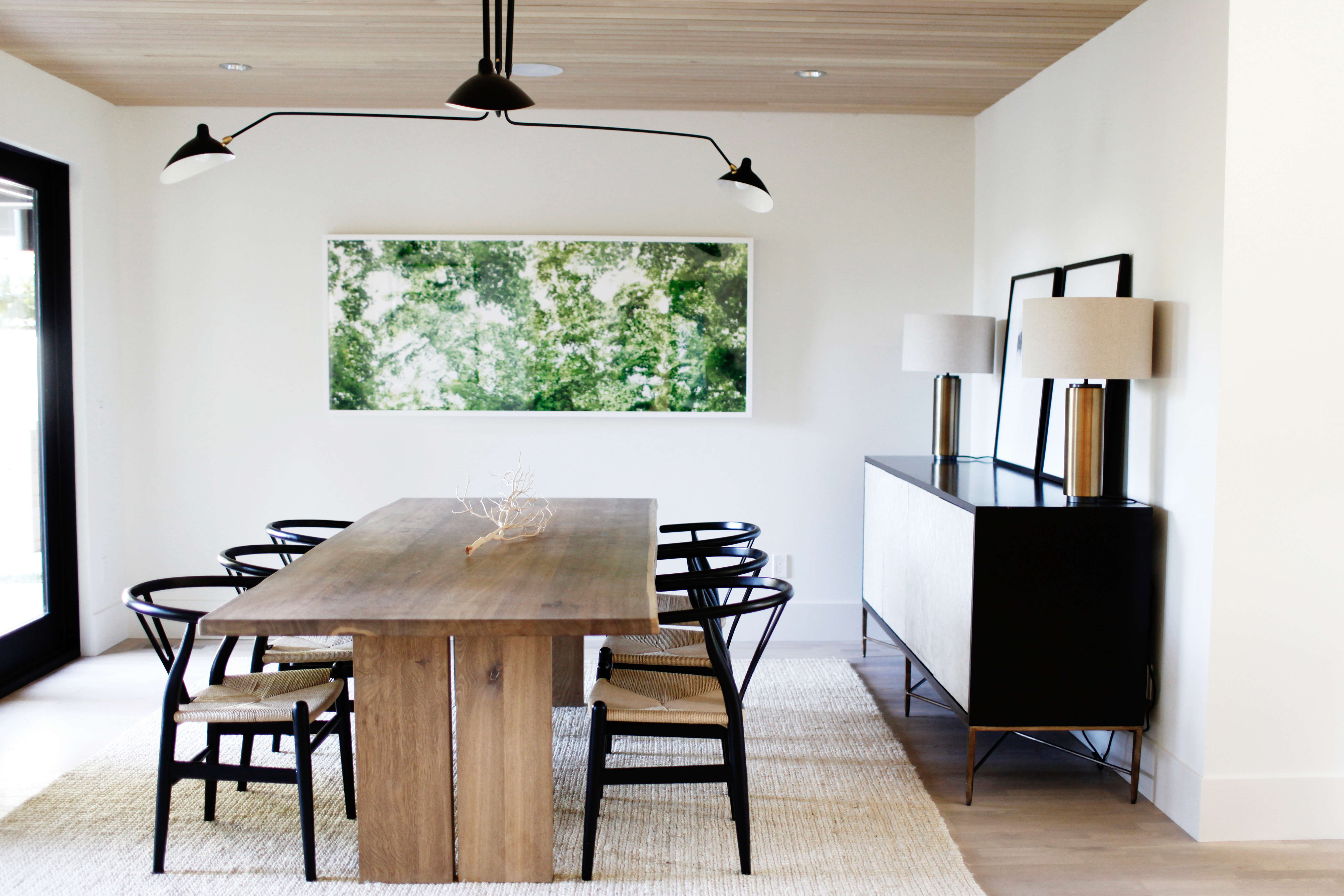 Above: “One of the first things I did when I came on board was open up the entry to the dining room and kitchen to create a lofty feel,” says Lisa. “We decided to use clear hemlock—cheaper than fir—on the ceiling of the dining room to delineate space.” The live-edge oak table is the Dakota from Crate & Barrel and Lisa found the Wishbone-like chairs—$139.99 each—on Overstock. 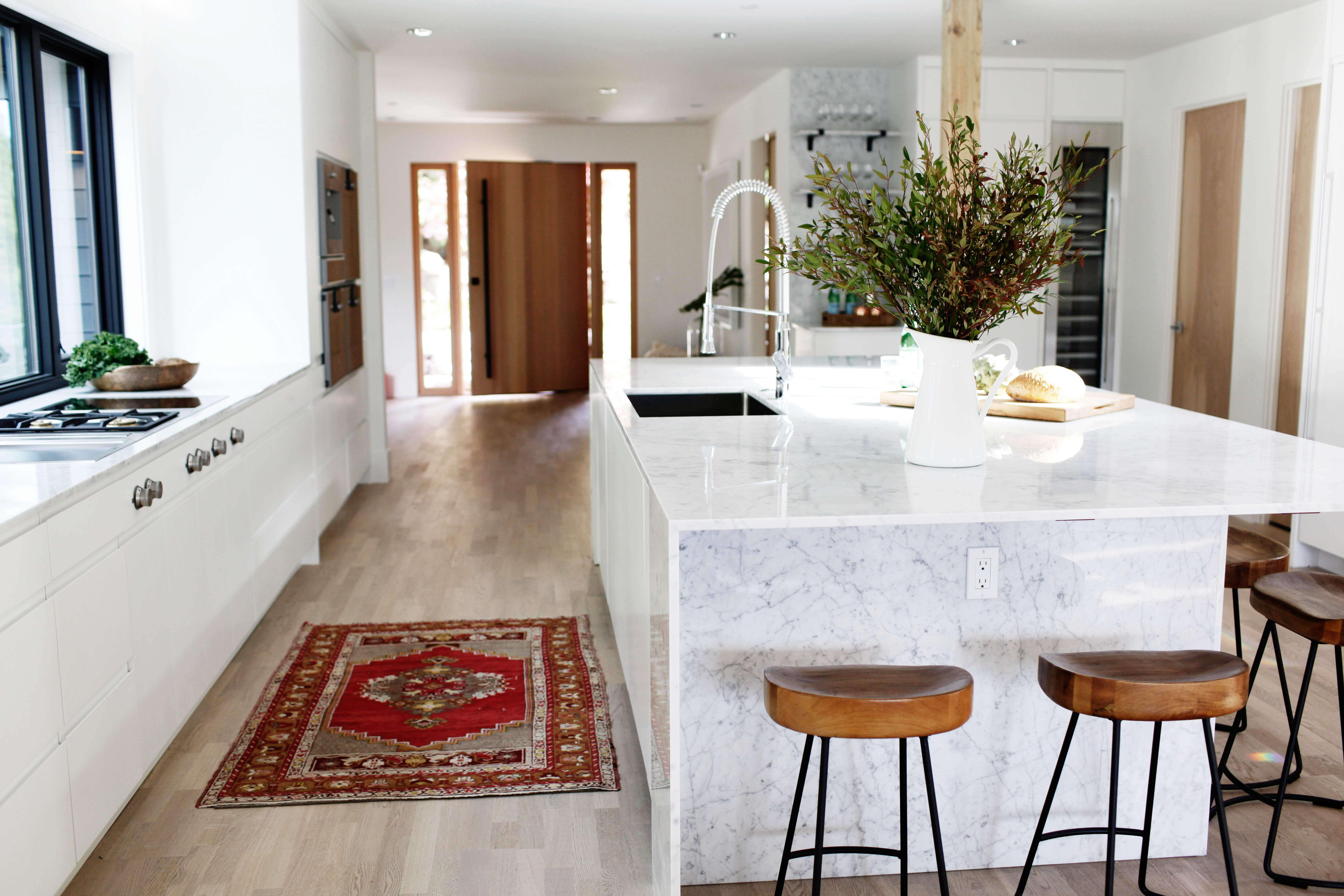 Above: Michele cooks dinner every night and wanted a center-of-the-action kitchen. The design—with a large bank of windows in lieu of overhead cabinets—features a large Carrara marble island with waterfall detailing.

To create a “tablelike feeling,” Lisa placed stools on two sides rather than in a row. “And we purposefully didn’t hang any pendant lights, so as not to break up the visual line from room to room.” 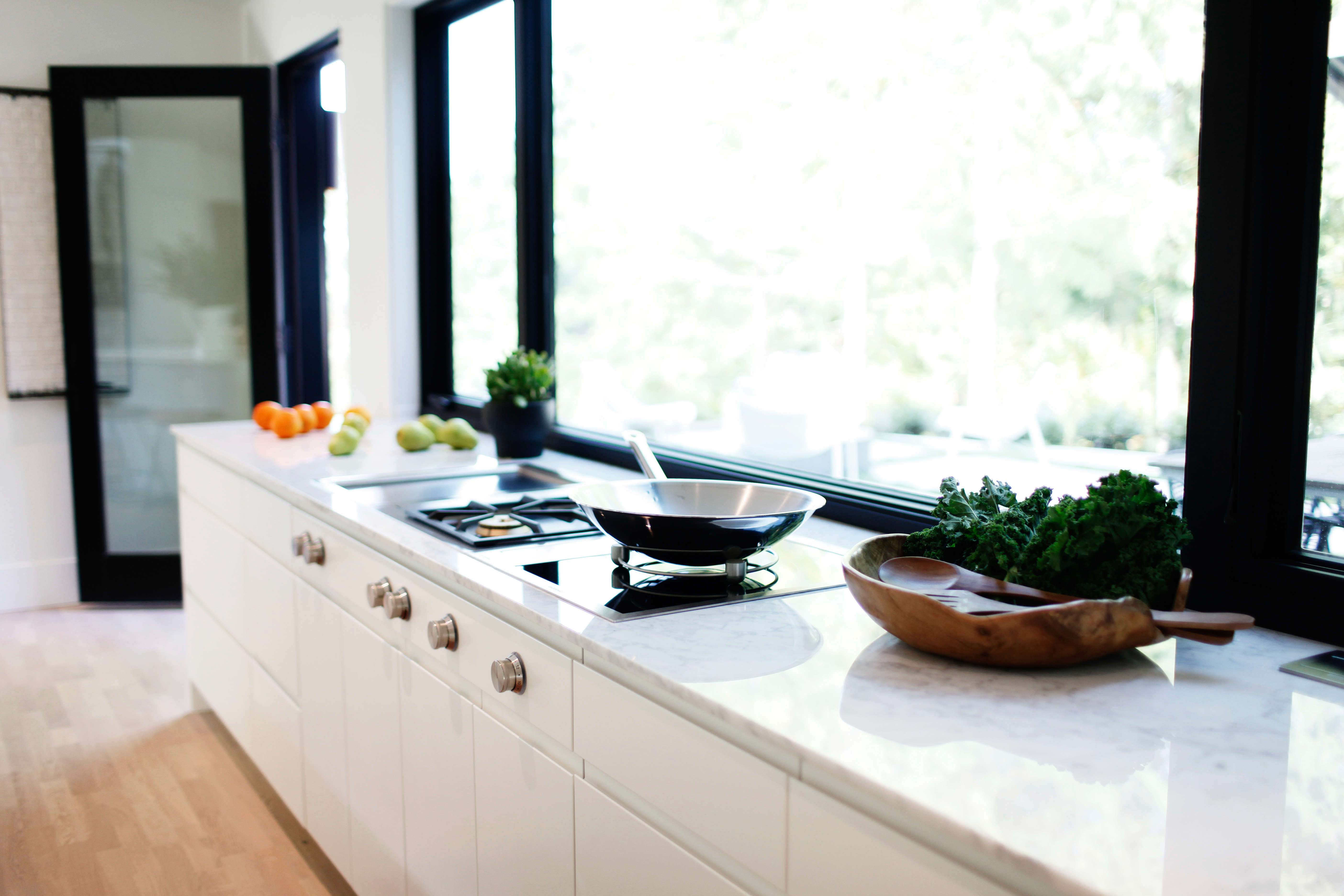 Above: The cabinets are the Cove design from Bellmont Cabinets (which supplied the cabinetry throughout) and have integrated pulls “to keep the lines horizontal and simple,” says Lisa. The appliances are from Gaggenau—”with cooktop control knobs subtly placed on the cabinet fronts rather than on top.” 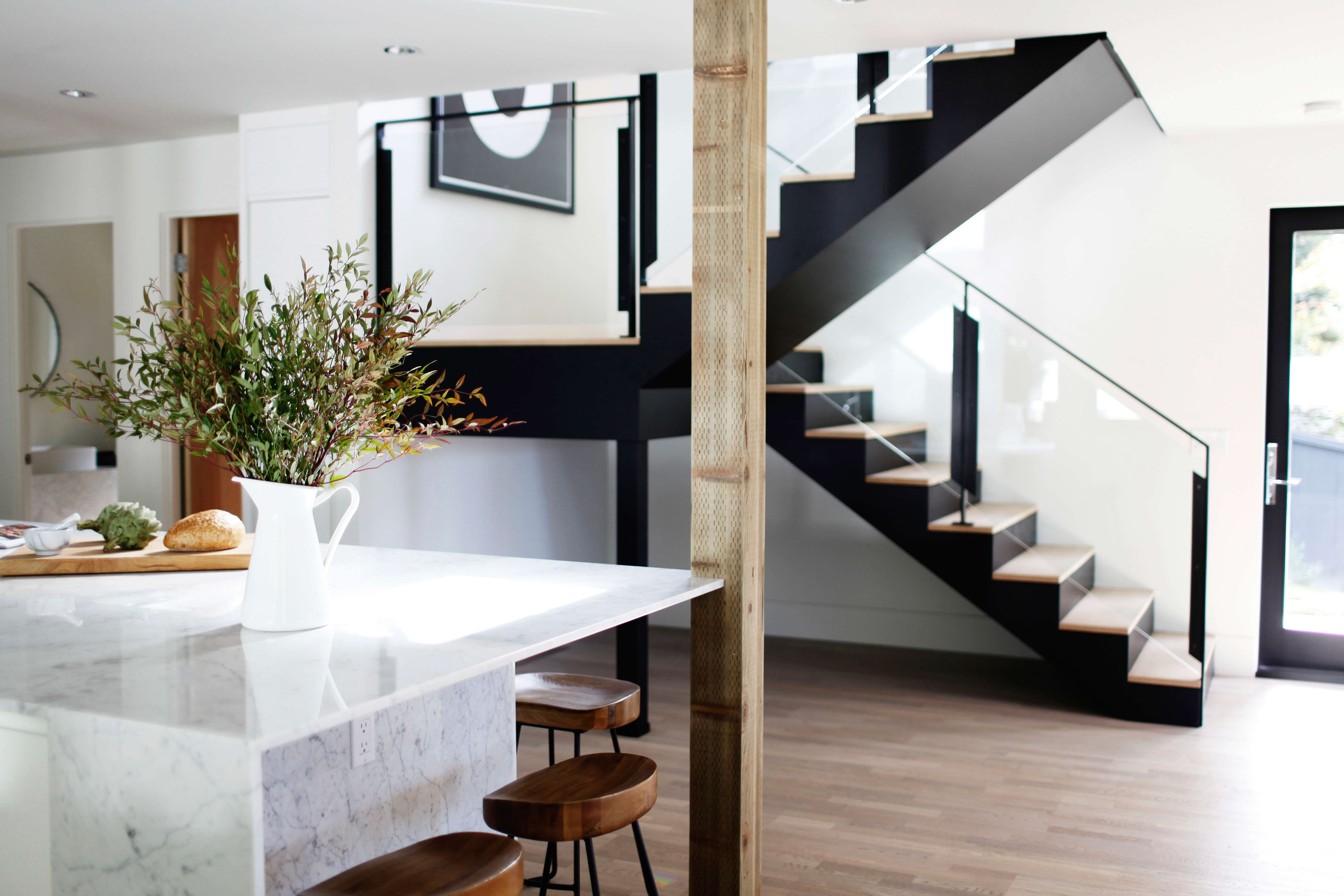 Above: In place of an enclosed stair, the room now has a dramatic open design: “We wanted the look of a floating steel staircase, but it was not in the budget,” says Lisa. “The contractor’s framer came up with a very simple, wood-framed staircase with minimal posts. We then painted the whole structure black to look like steel. Custom white oak treads were installed, and the railings are a pre-manufactured kit from Brookfield Stairs that allowed for a quicker install time and a more stable, precise structure.” 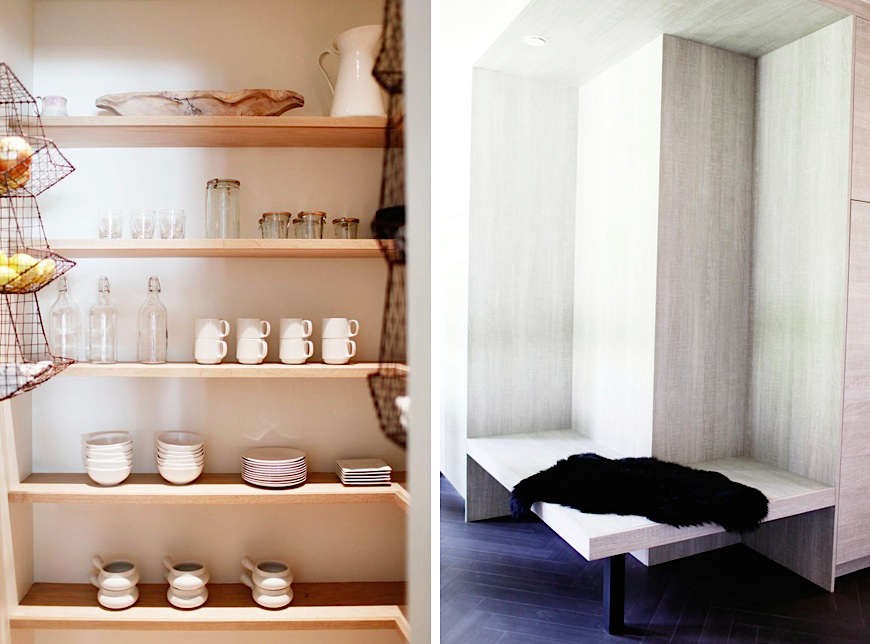 Above L:  Built-in shelving in the tidy pantry. Above R: The mudroom off the kitchen has cabinets and a bench faced with a laminate that looks like pale wood: “This is hardworking space,” says Lisa, “but all clutter is carefully hidden behind touch-latch doors with a modern floating bench connecting them.” The floor is tiled with Streaming, a porcelain tile in a herringbone pattern—”it comes in 12-by-24-inch tiles and we cut it down to 4-by-24″. 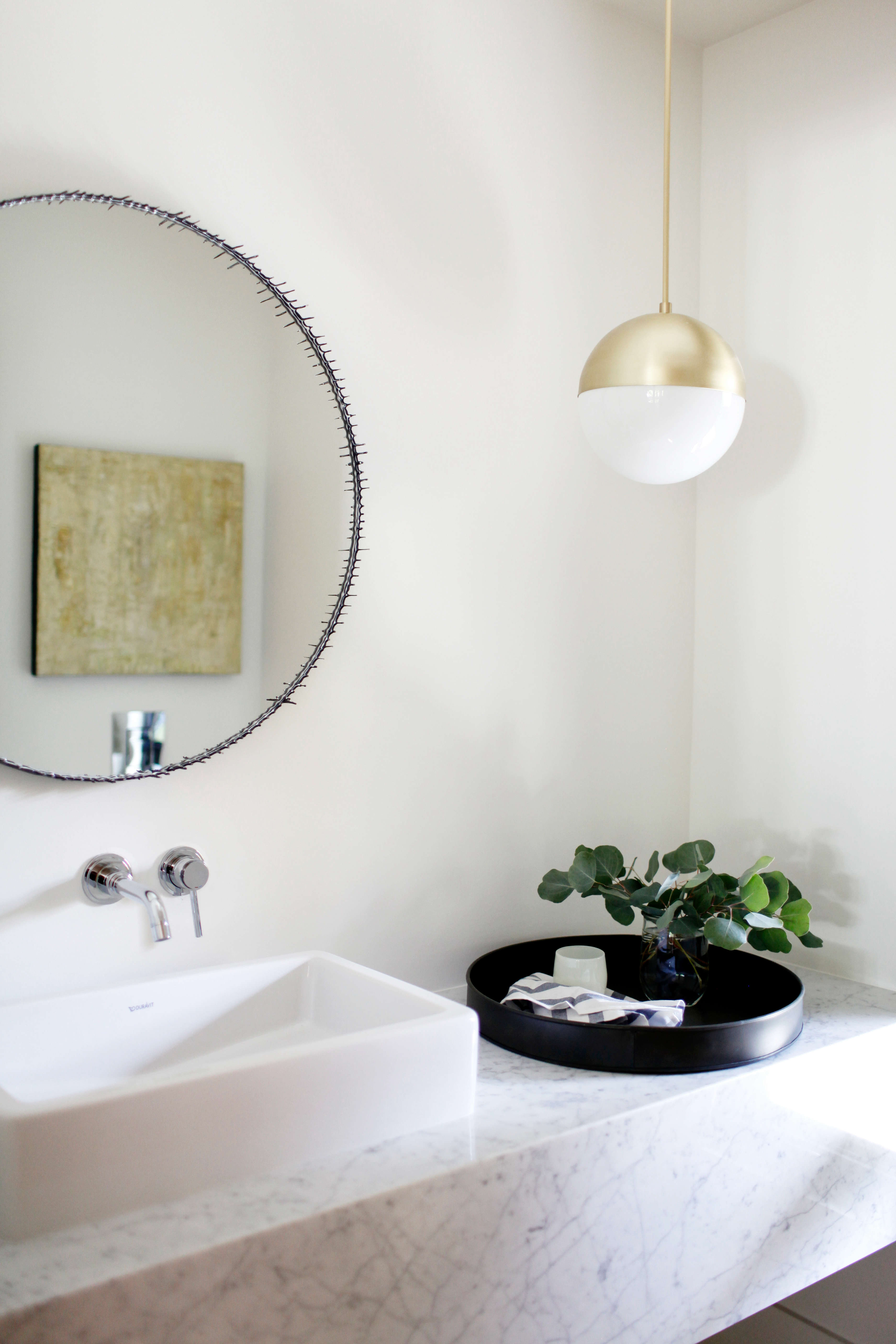 Above: A resin-framed Drip Mirror by Elyse Graham in the powder room. “As in the kitchen, the counters are Carrara marble mitered to look like a big chunk of marble,” notes Lisa. 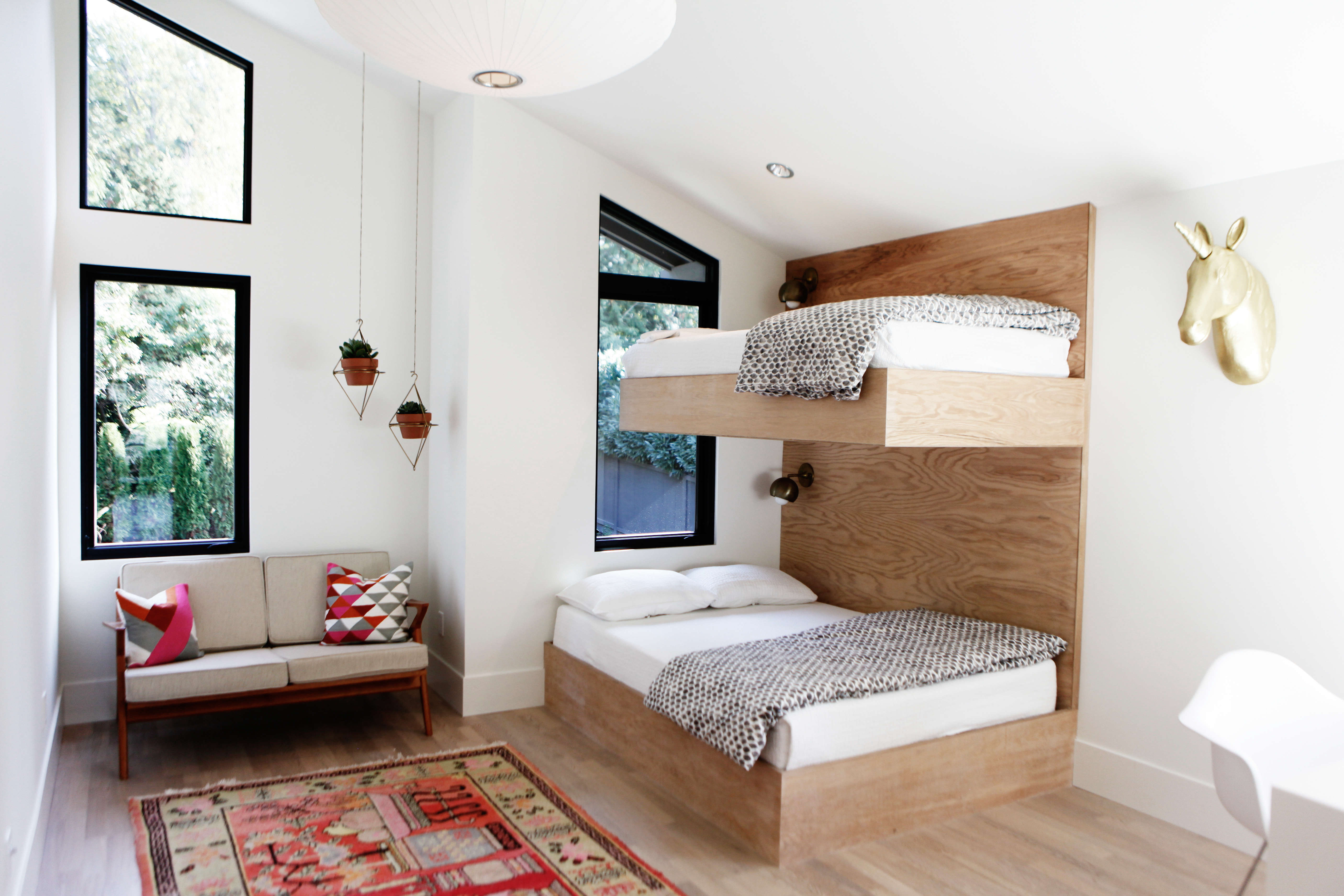 Above: Built-in bunkbeds for the family’s 9-year-old daughter, Olivia: “Steel rods hidden in the wall support it, and the structure is made of cost-effective white oak plywood. Olivia sleeps on the bottom and plays on top, so we were able to avoid rails.” 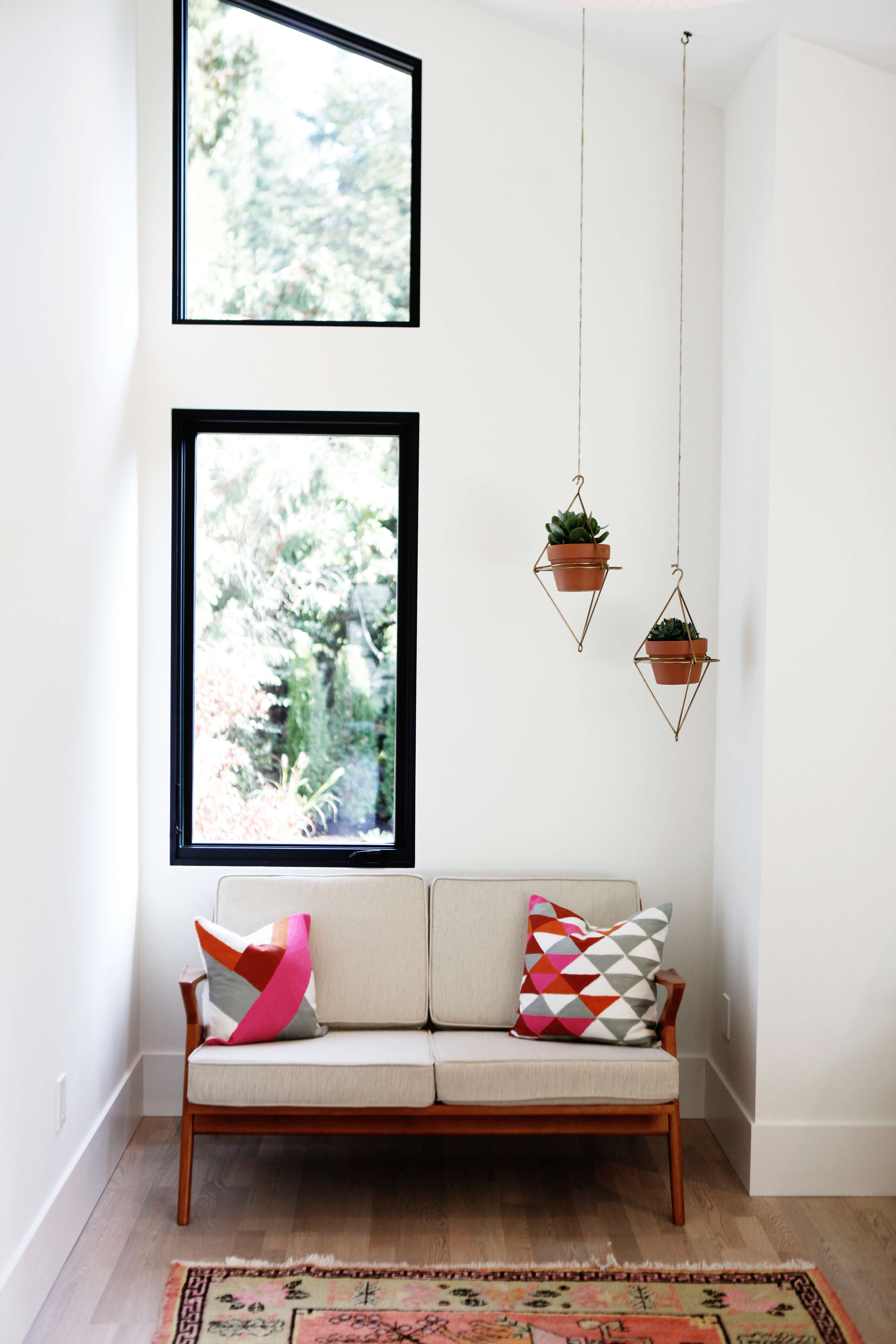 Above: The settee is a midcentury piece and the planters are West Elm’s Hanging Wire Pot Bracket, currently on sale for $20. The white walls throughout are Alabaster from Sherwin-Williams. 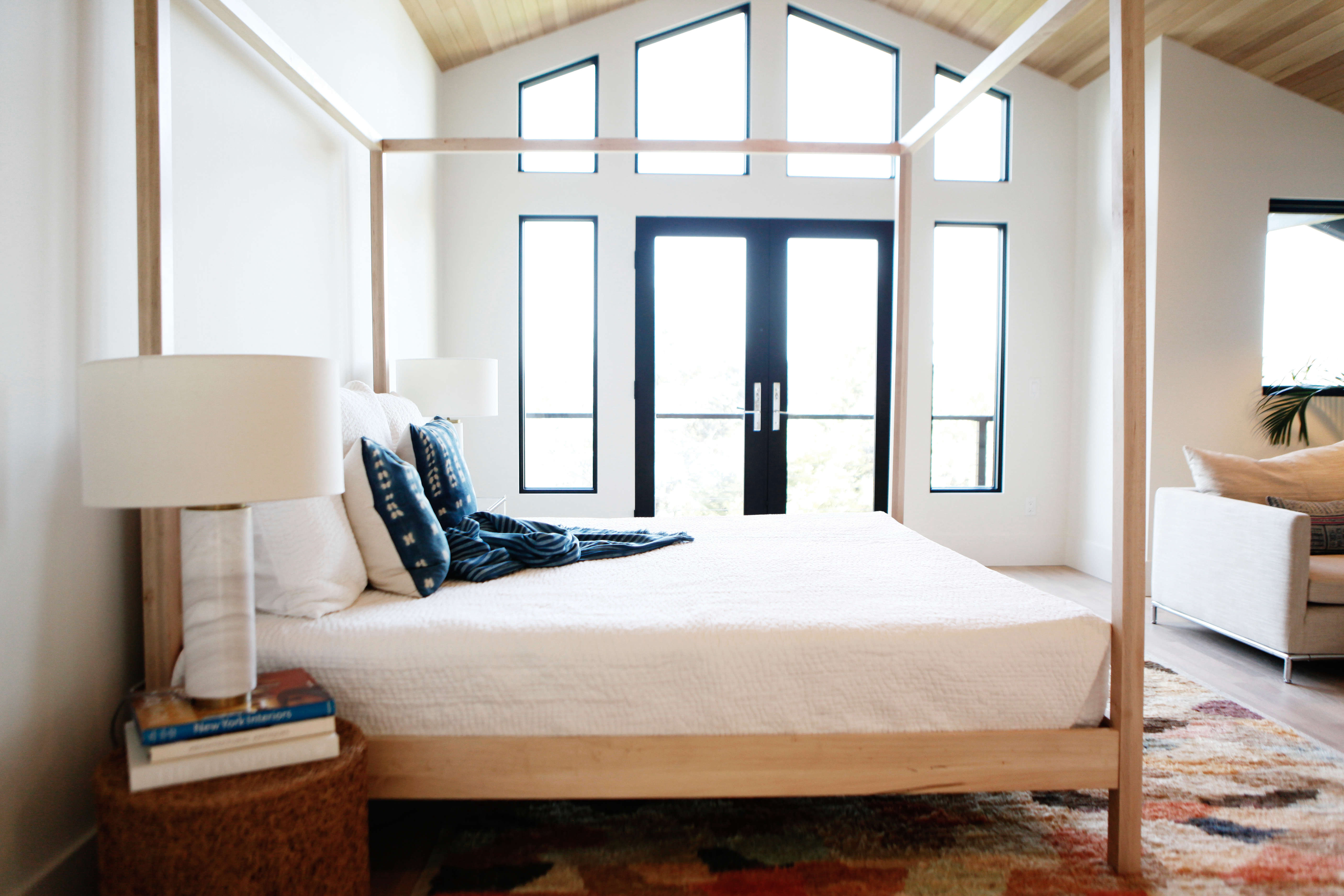 Above: A modern canopy bed (the Hale from Room & Board) stands under the peaked ceiling in the master bedroom. 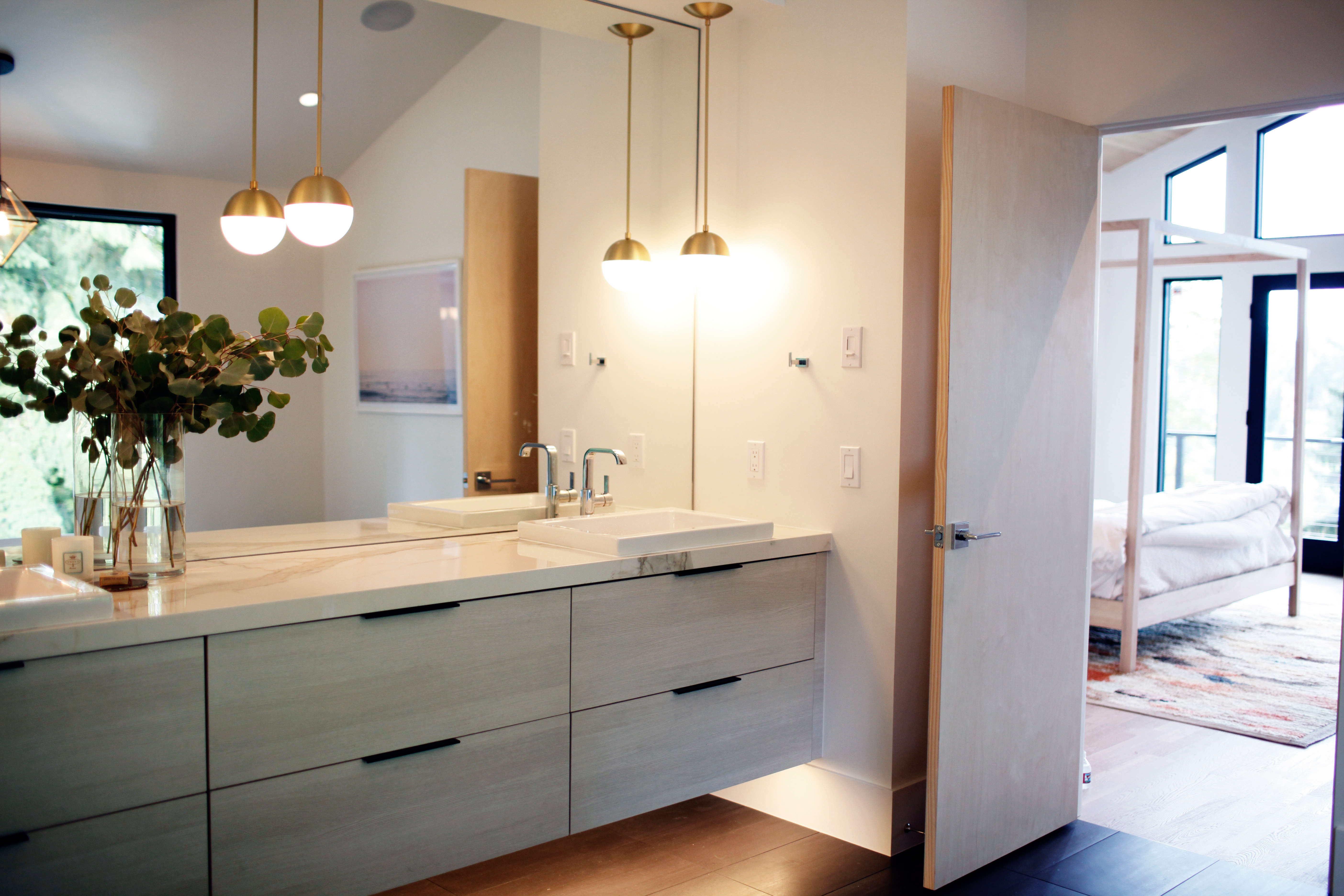 Above: The counter and shower in the master bath look like marble but are Calacatta porcelain tile: “The thin, lightweight nature of the porcelain slabs makes covering whole areas much easier and more cost-effective than real marble,” says Lisa, noting, “the Duravit sinks are vessel-mounted as the thin-slab porcelain doesn’t allow for undermounts.” 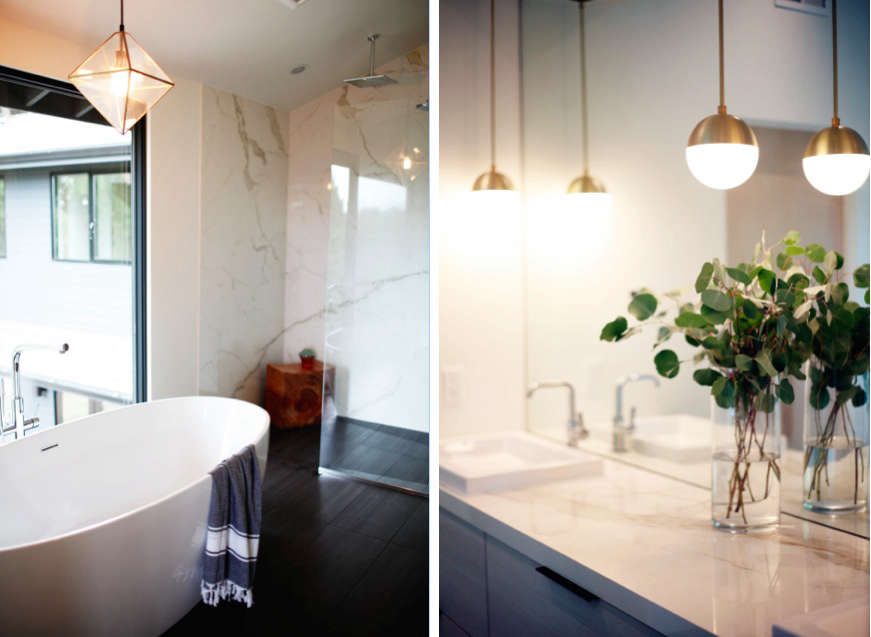 Above L: The room is big enough to hold a freestanding Fleurco tub. The flooring is the same wood-grained porcelain tile used in the mudroom. Above R: The brass lights are the Cedar & Moss Pendant; $209 from Rejuvenation. 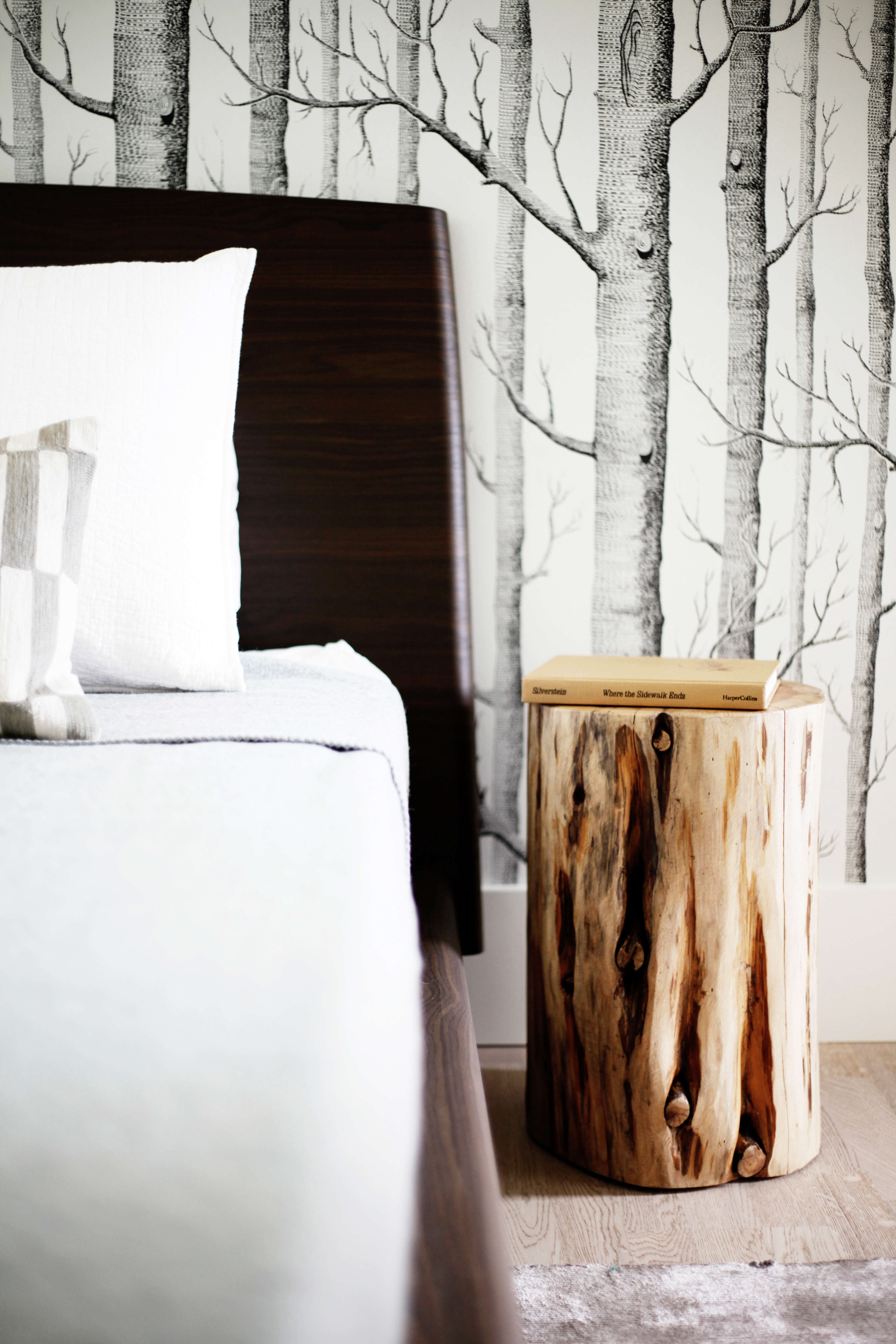 Above: Cole & Son Woods wallpaper and a stump bedside table in a guest room. 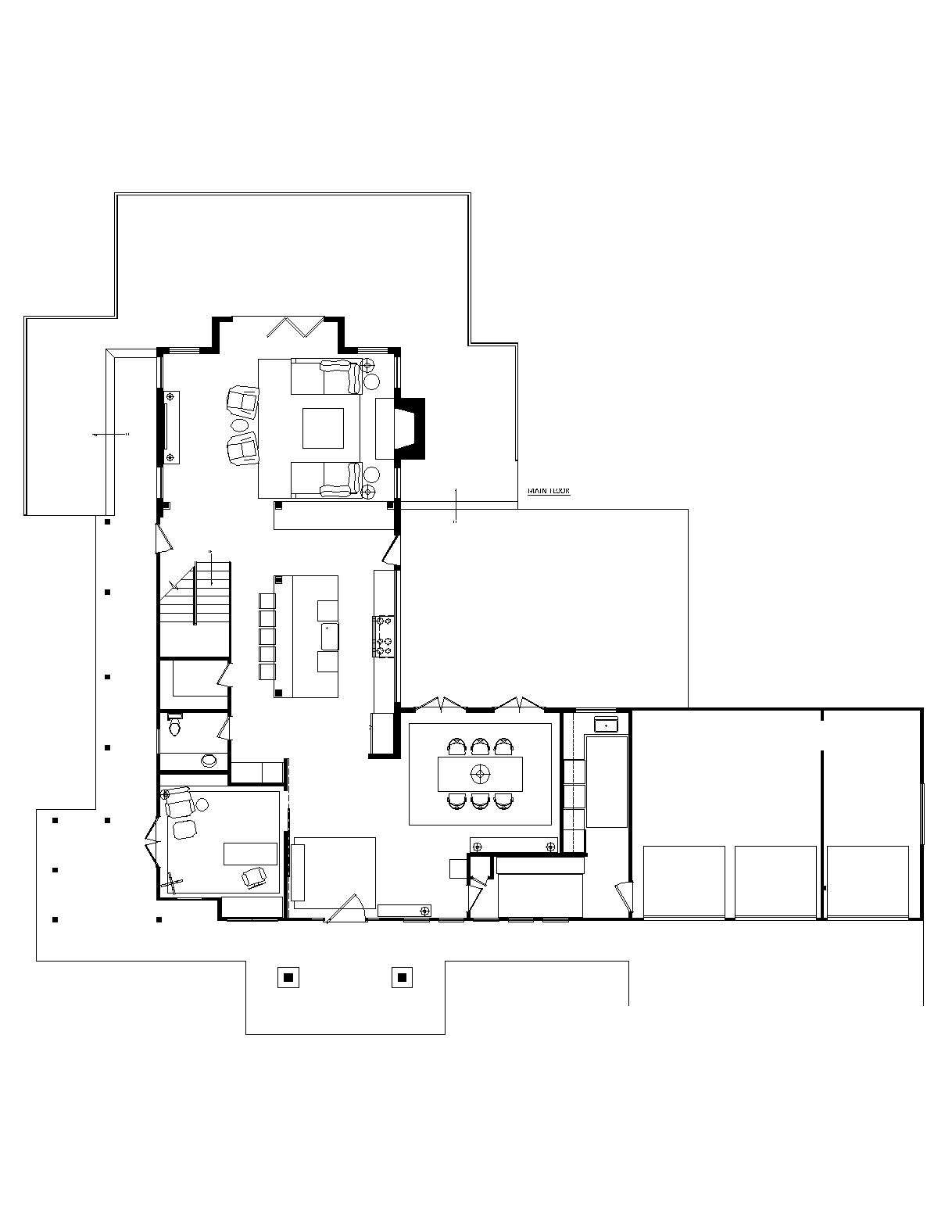 Above: On the main floor, all interior walls were removed to create an open concept floor plan. Explains Lisa: “We opened up the entry right onto the dining room and kitchen. We eliminated a sunken living room, so that the kitchen flows into the living room. The new open staircase was central to the design and we carefully planned for cabinetry, so that there’s a place for everything. We wanted open space and a strong connection to nature.” 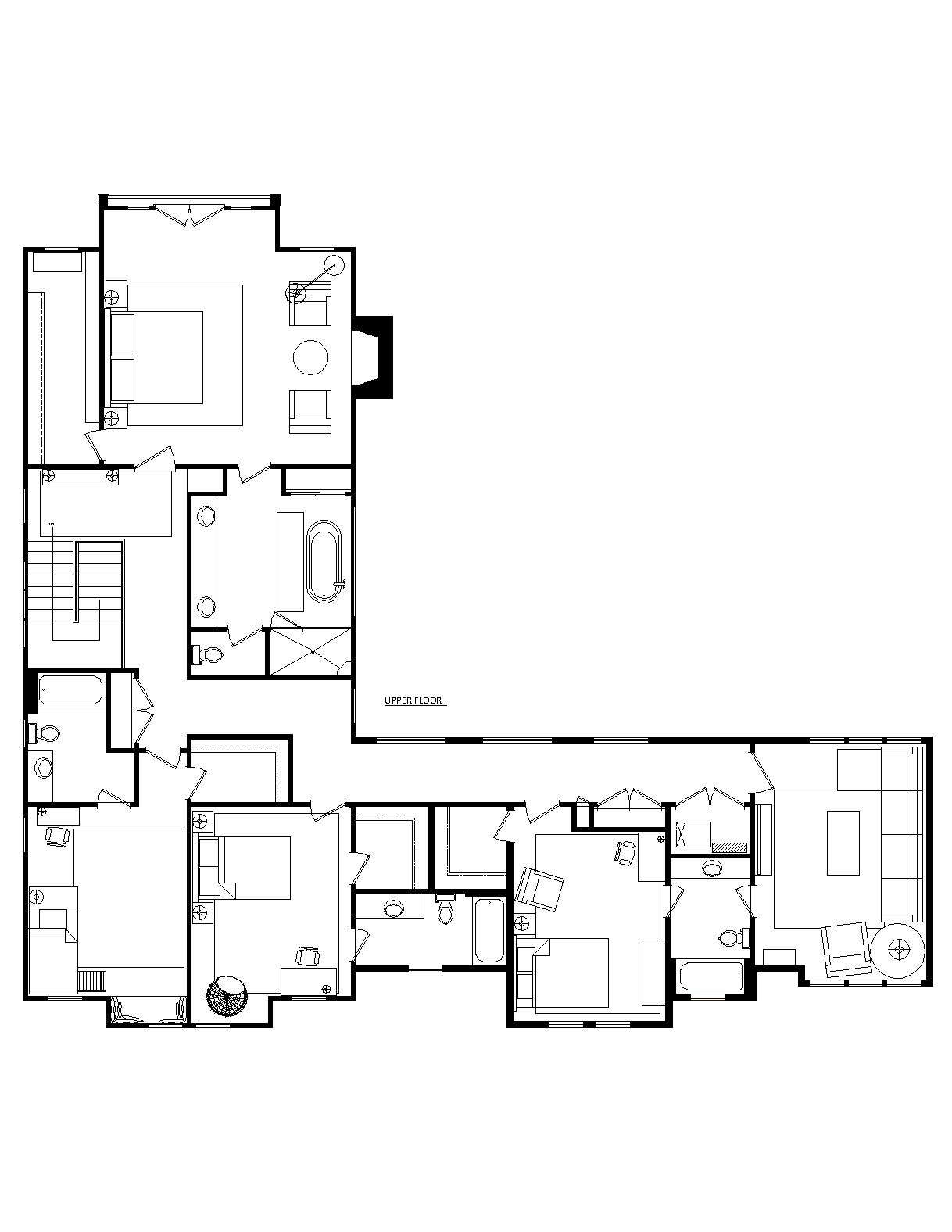 Above: The upstairs was reconfigured to create walk-in closets and en suite baths in all the rooms. The kids’ bedrooms and a TV room are located in the new wing.

The tour continues on Gardenista.

Nix in NYC: Vegetarian Cool with a California 70s Vibe