Alter, an elite SF chef who helmed the kitchens at Daniel Patterson’s Plum and Haven, first set out to open Nightbird with the Michelin-starred Patterson, which meant that Patterson’s restaurant designer—Scott Kester in New York—was also originally on board. When Patterson left the project (still supportive, just too busy), Alter turned to Roddy Creedon of Allied Architecture & Design as a local, on-the-ground resource. (But Alter even had to coordinate with the landlord’s own architect, making for a tornado of opinions and drawings that dragged on the remodel for a full two years.) Through it all, Alter was Nightbird’s constant; a technical chef turned chooser of chairs, floors, and napkins. 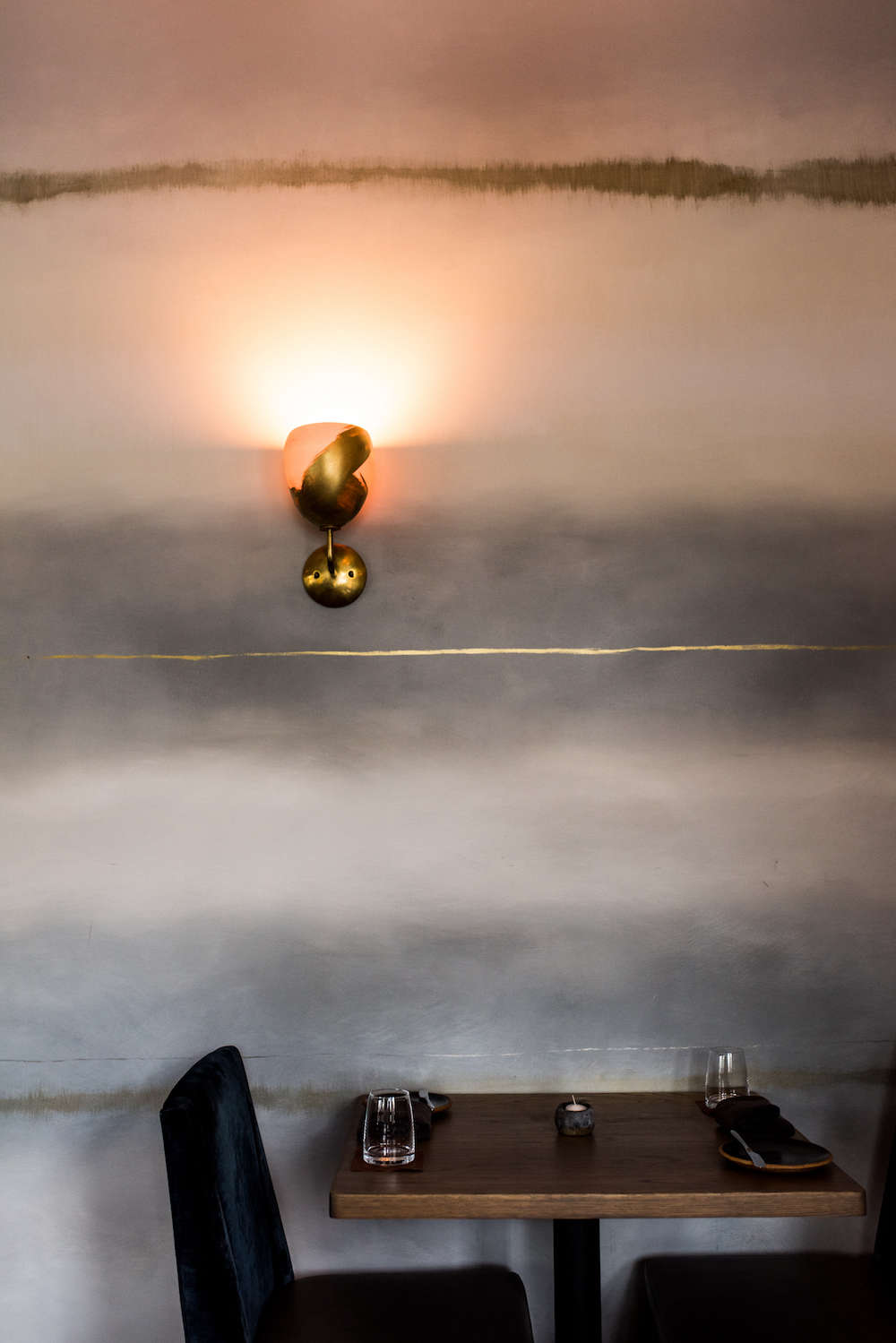 Above: According to Alter, “The key question for Nightbird was: ‘How do we make it feel elegant but still functional as a restaurant?'” For the walls, the initial plan was to plaster them—an inspiration borrowed from Cala restaurant, just up the street. But when decorative artist Caroline Lizarraga started making samples, she sensed that Alter had a grander vision than what had been decided. Together they developed a wall covering which Alter calls “fog”—a mix of gray, white, silver, and gold. 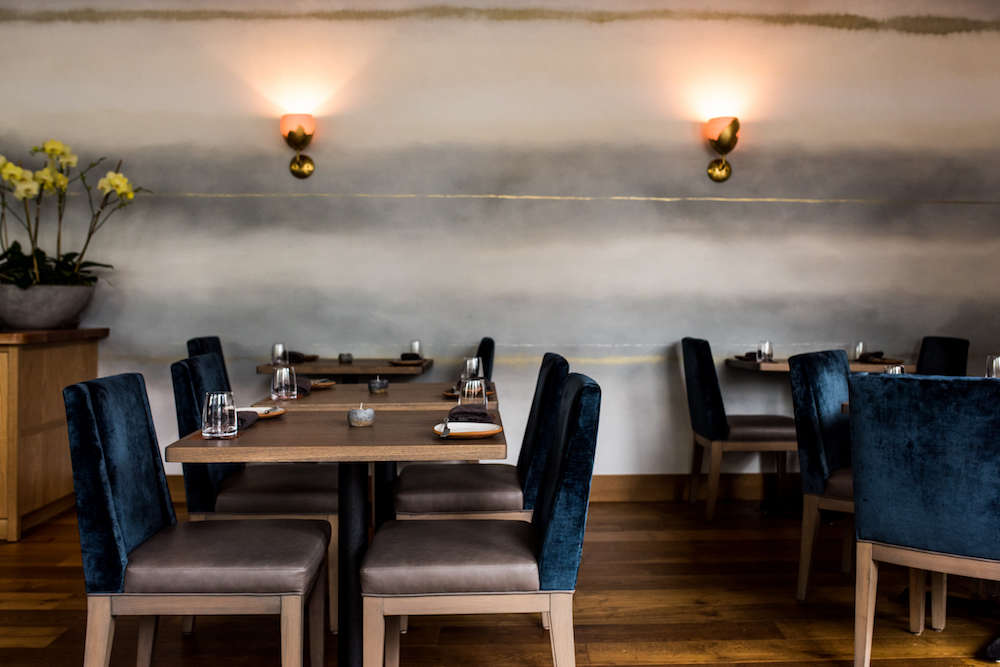 Above: Alter’s inclination was to fill the space with understated colors—”it’s very like me,” she said; “everything I own is black or gray.” But Kester pushed for color, so they settled on blue. They chose the chairs’ blue velvet and gray leather upholstery together in New York, and picked walnut wood tables to be stained with a lightening blue-gray wash. (Both chairs and tables were custom-made in Arizona.) 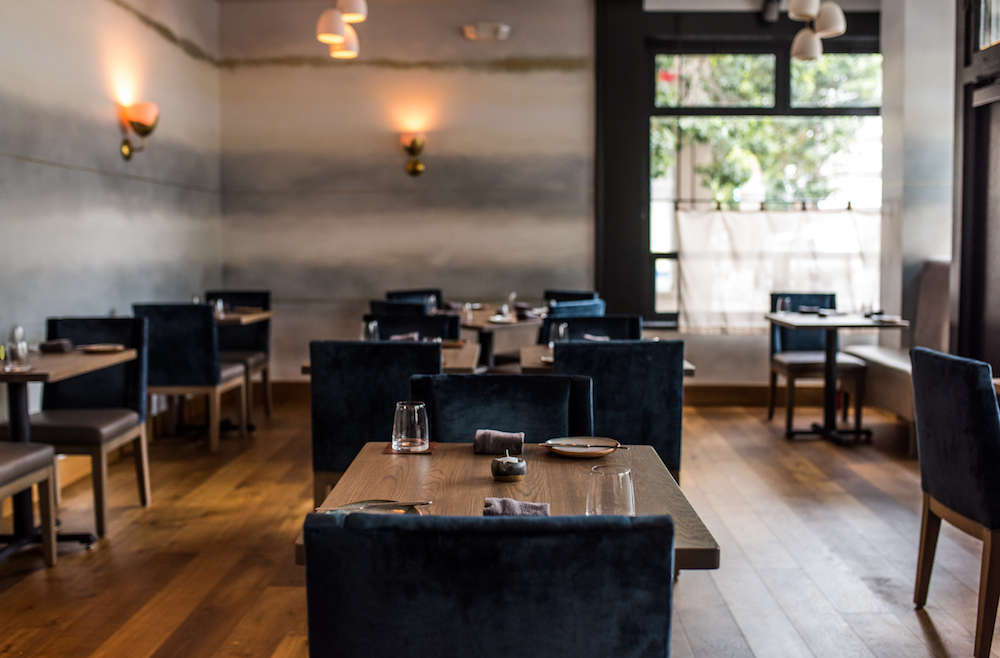 Above: Unsurprisingly, the space is personal for Alter. “Basically, I live there,” she told me. “So I wanted something that would evolve and grow with me as a person, and as a chef.” That meant avoiding trends that could soon look dated, or clichés she might grow to hate.

Perhaps most importantly, Alter wanted Nightbird to look unlike other restaurants in town. “I didn’t want it to be industrial or masculine, with exposed wood,” she said. “I love that, and those restaurants are beautiful, but I knew I wanted something different.” 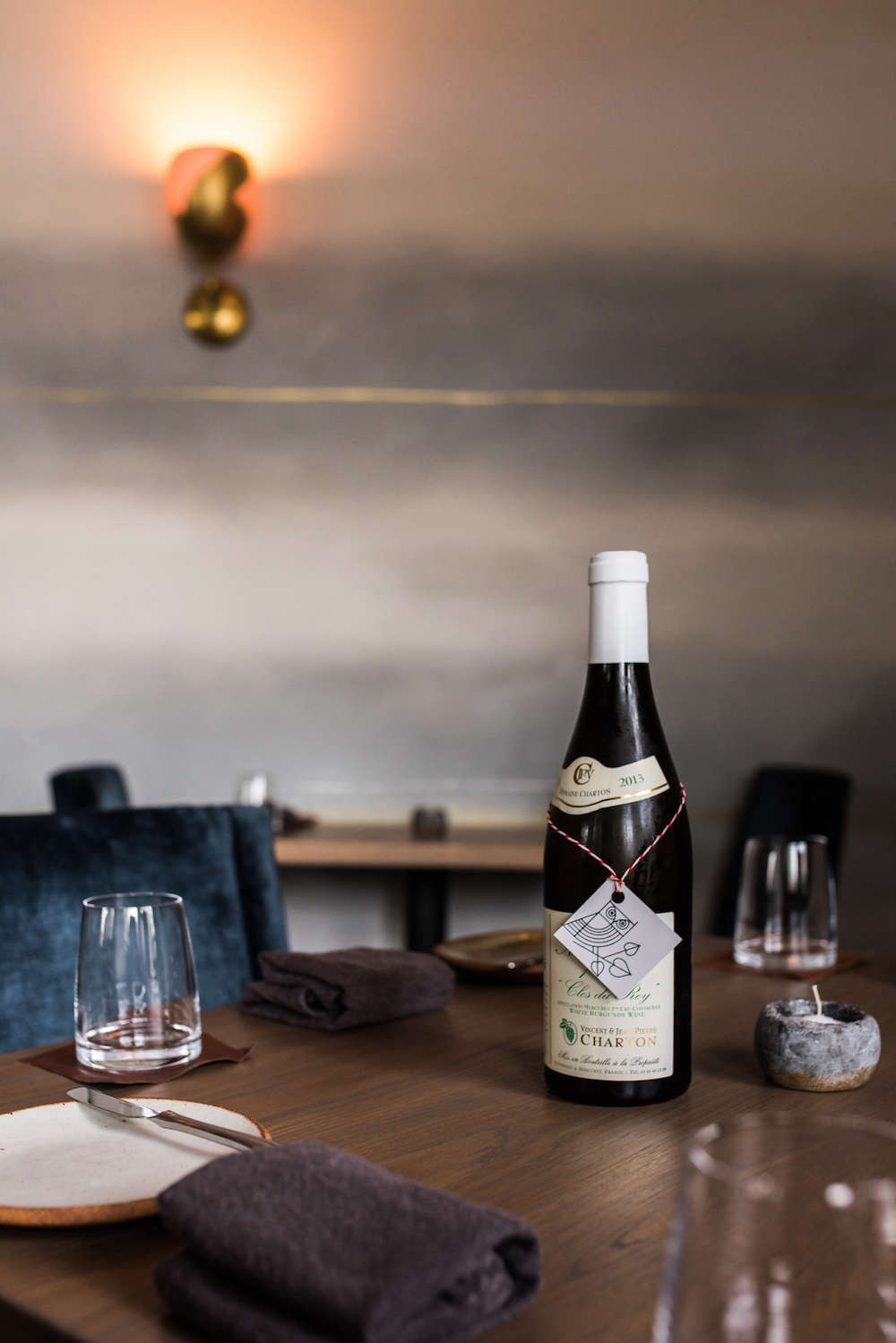 Above: A wine bottle sports a simple paper tag with the Nightbird logo, strung with baker’s twine. 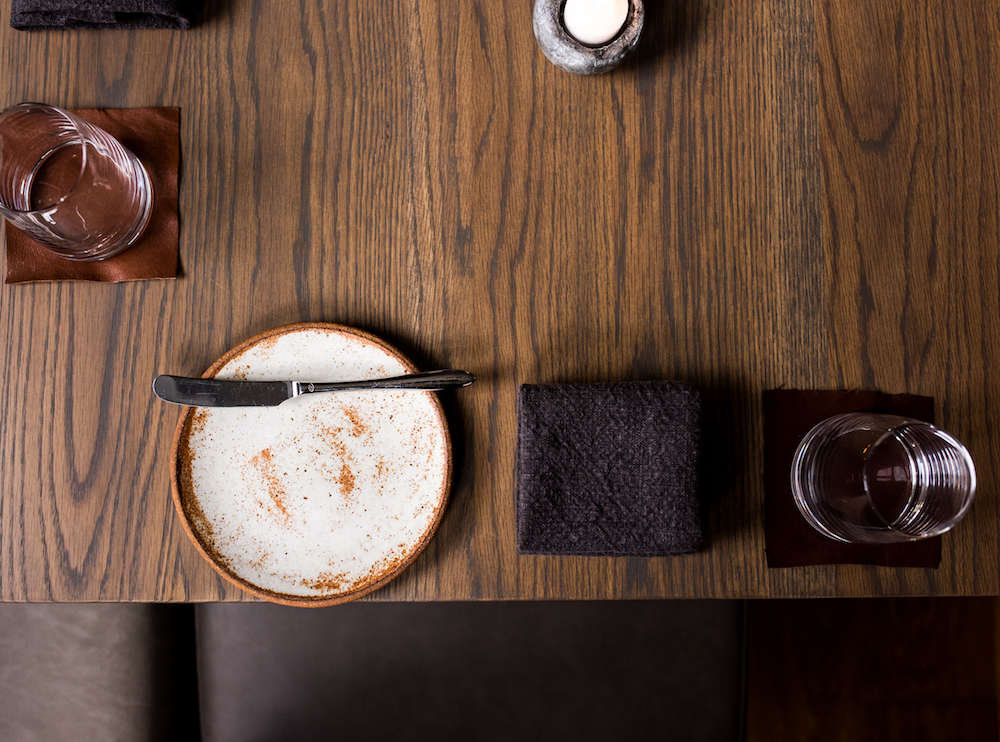 Alter shopped for the linen and leather herself. “I didn’t want the napkins to be white; I wanted a really pretty linen to match the color palette,” she said. 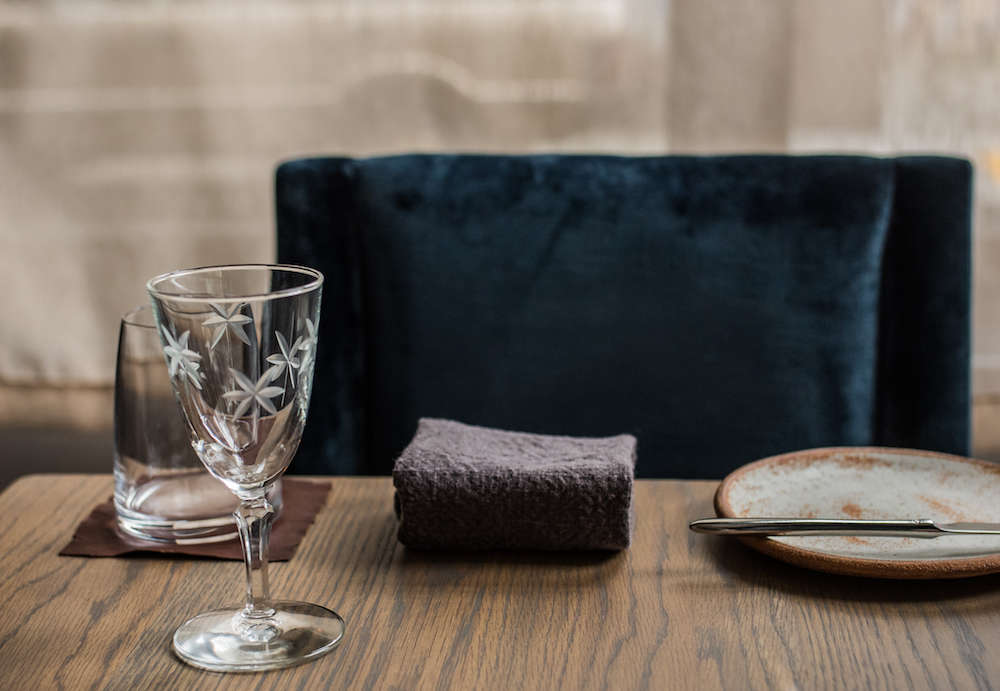 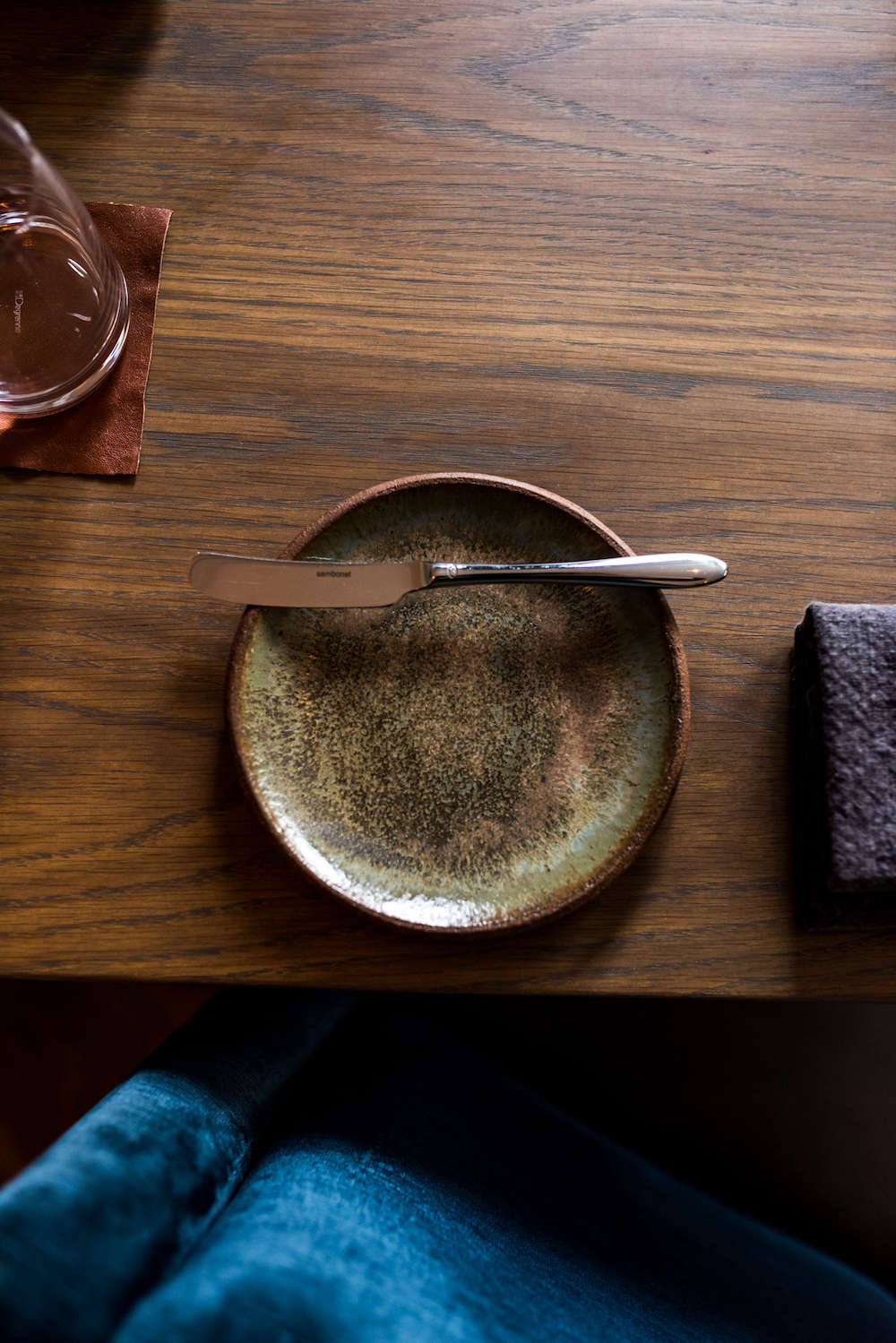 Why spend the time and money on handmade ceramics? “Because in the end,” said Alter, “the food is the most important part”—and its presentation matters. These plates “are made for me; no one else will have them. That, to me, is really special.” The flatware is by Sambonet. 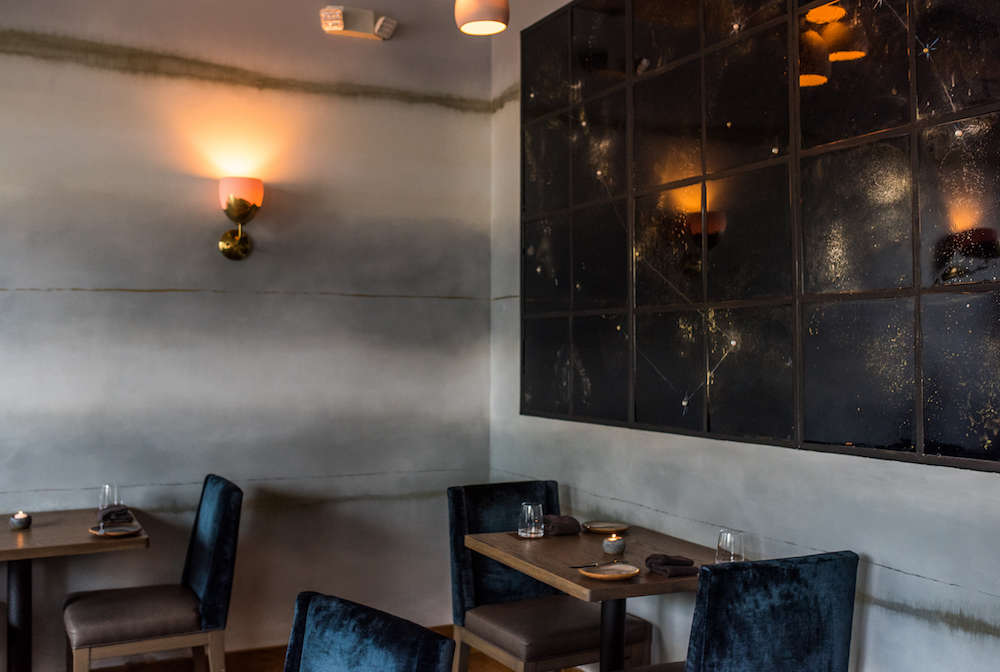 Above: Alter is quick to concede that some design elements—like the black-and-gold glass mural on the wall—were happy accidents. “Originally, I wanted a window between the kitchen and the dining room, where you could feel the kitchen’s energy but have some privacy,” she said. When a black block glass panel was installed in the wall, “I hated it,” she said. “It looked like those shower walls from the 80s and 90s. I just stared at it and wanted to cry.”

Lizarraga saved the day by suggesting they pour resin over the glass and turn it into a piece of art. “We created this constellation to tie into the theme of Nightbird,” said Alter. “And it has gold flecks in it, so it fits nicely with the wall.” 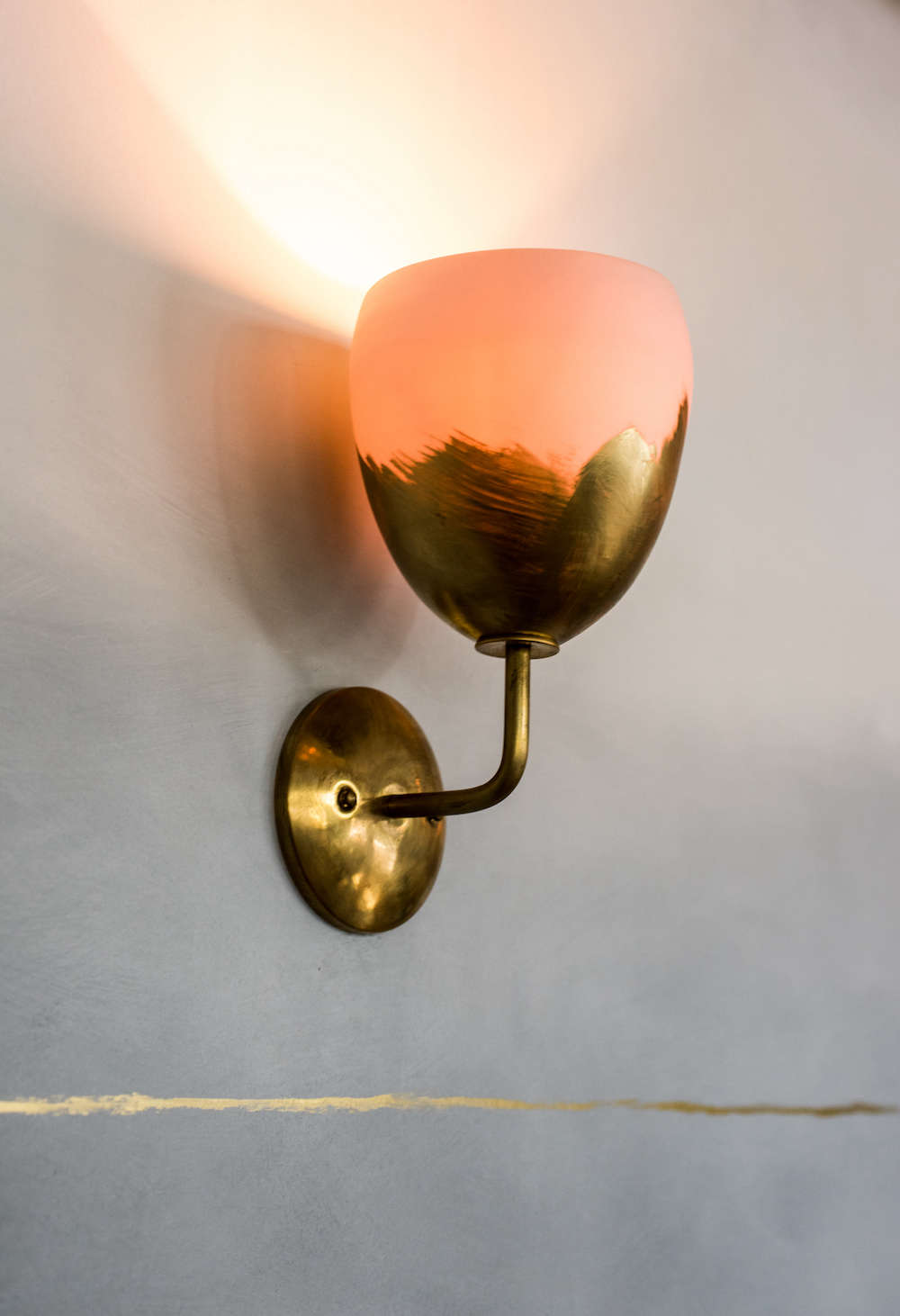 Above: The lighting was an equally joyful mistake. When it became clear that the custom chandeliers Alter had first chosen weren’t going to fit into the space, she turned to the Internet. “Have you ever Googled chandeliers?” she asked me. “There are five million chandeliers out there!” 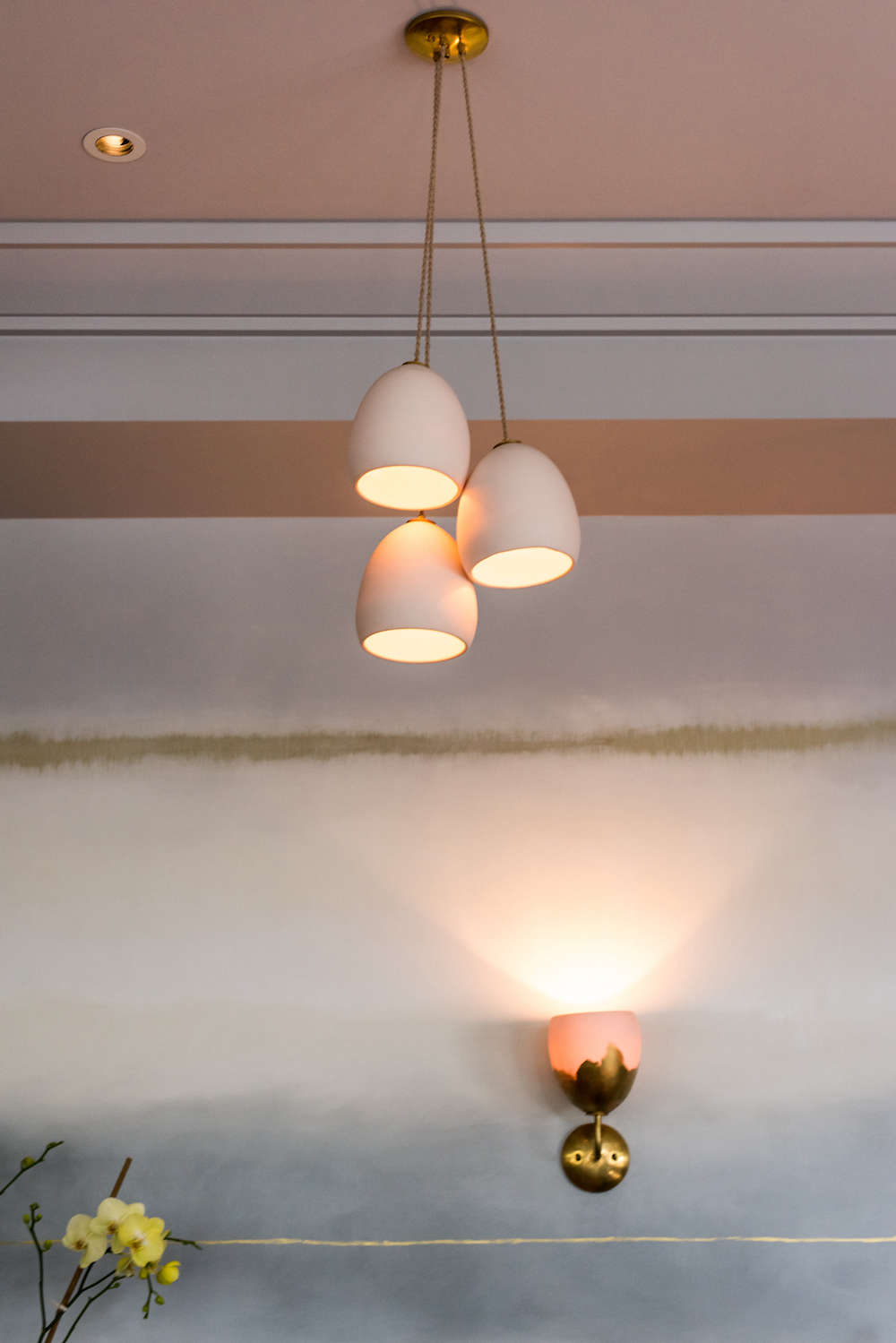 Above: Undeterred, Alter narrowed her search for something handmade by turning to Etsy, where she found Hammers & Heels, makers of ceramic pendant lights based in nearby Oakland. She visited their studio and “chose the ones that glow,” and the designers even hand-painted the lights in brass to echo the gold wall detailing. 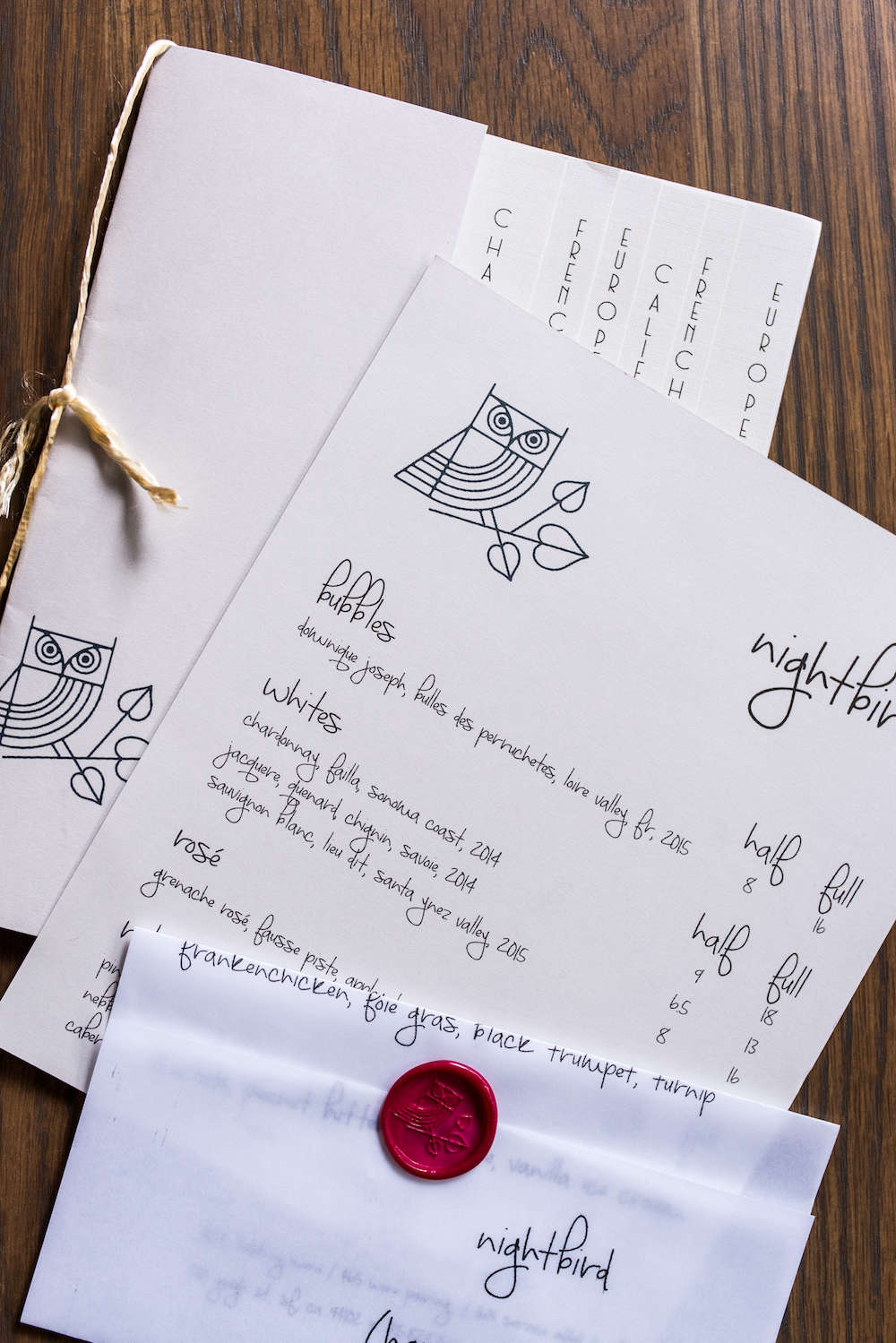 Above: “Naming the restaurant was one of the hardest things we had to do,” said Alter. But once she settled on Nightbird—after her childhood love of owls—she incorporated the theme into her design. The restaurant’s logo is an owl sitting on a linden tree—a nod to its adjoining bar, the Linden Room. “We make our own shrubs and tonics, and we brought in linden tree blossoms. We make a tea with it and put it in a cocktail. I like the botanical element,” she said. 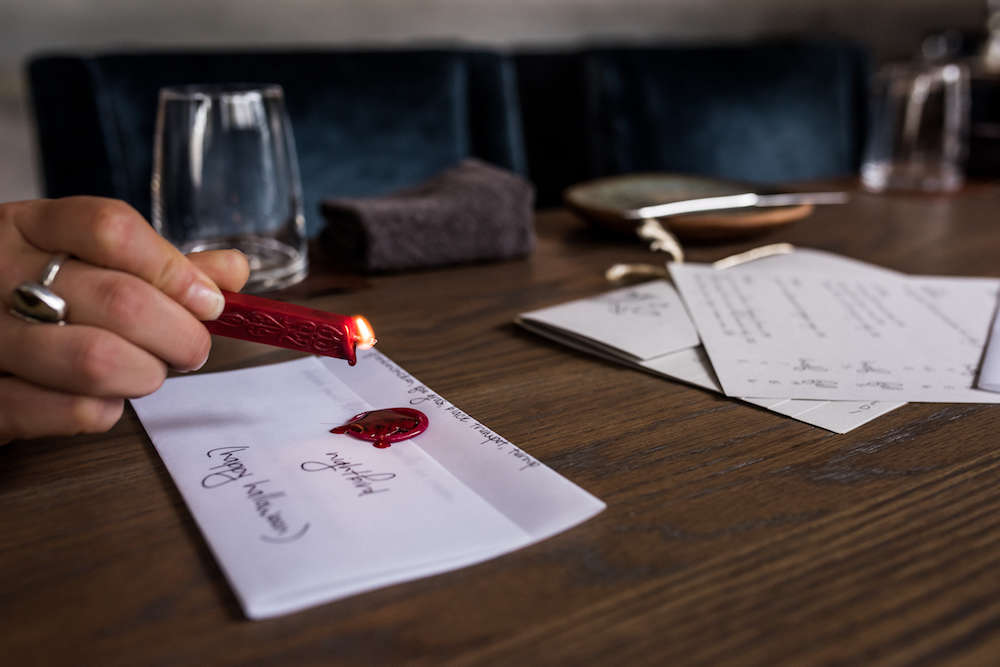 Above: Nightbird staff seal the night’s menu with red wax, stamped with the Nightbird logo. “I like the oldness of it,” said Alter. 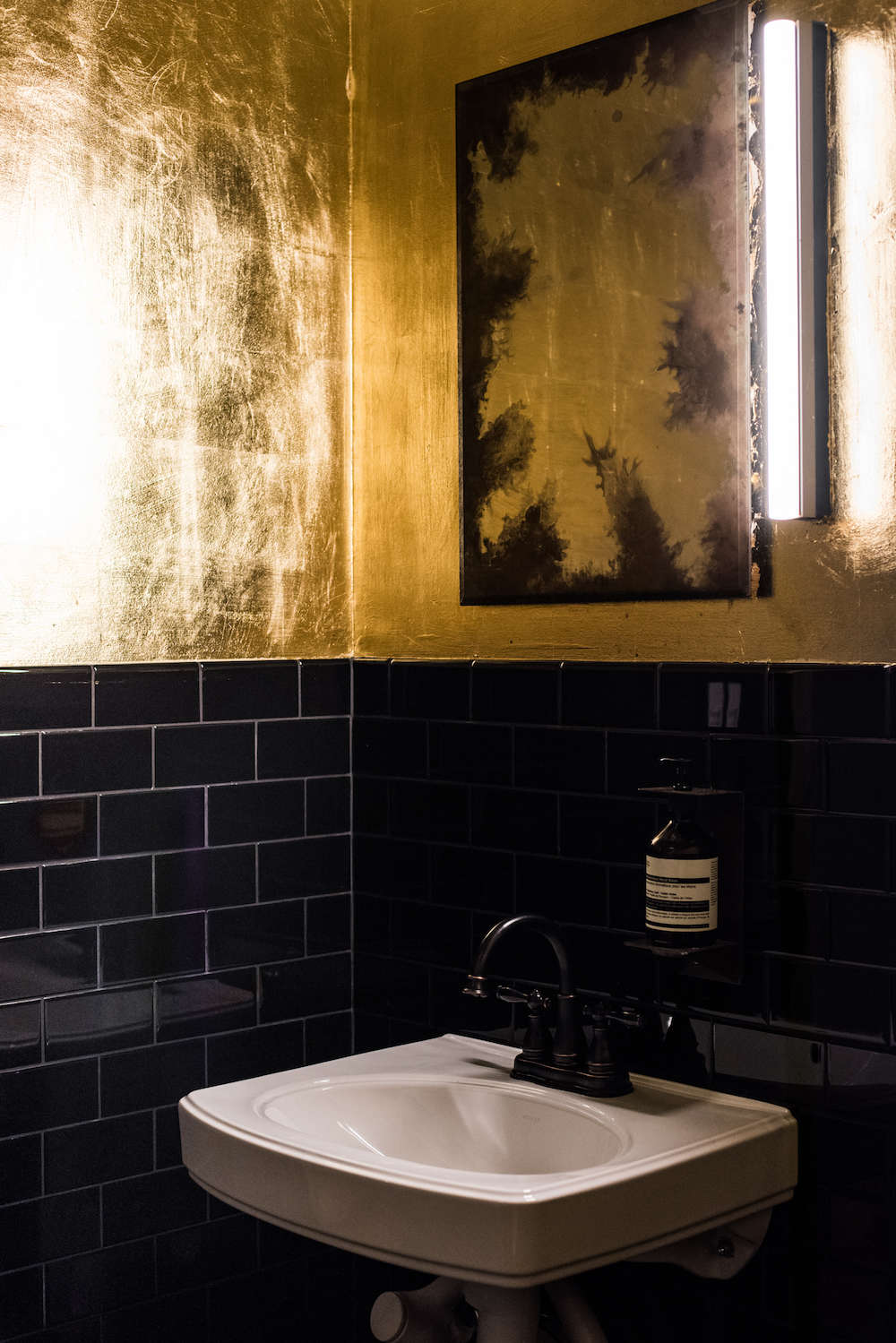 Above: In the bathrooms, Lizarraga helped rectify another design misfortune. After Alter bought some high-end bird-print wallpaper in Paris, half of it got lost, leaving only enough to cover one upper wall in each bathroom. Lizarraga suggested using gold leaf for the rest. “To me, it feels art deco,” said Alter. “It’s not gaudy.” 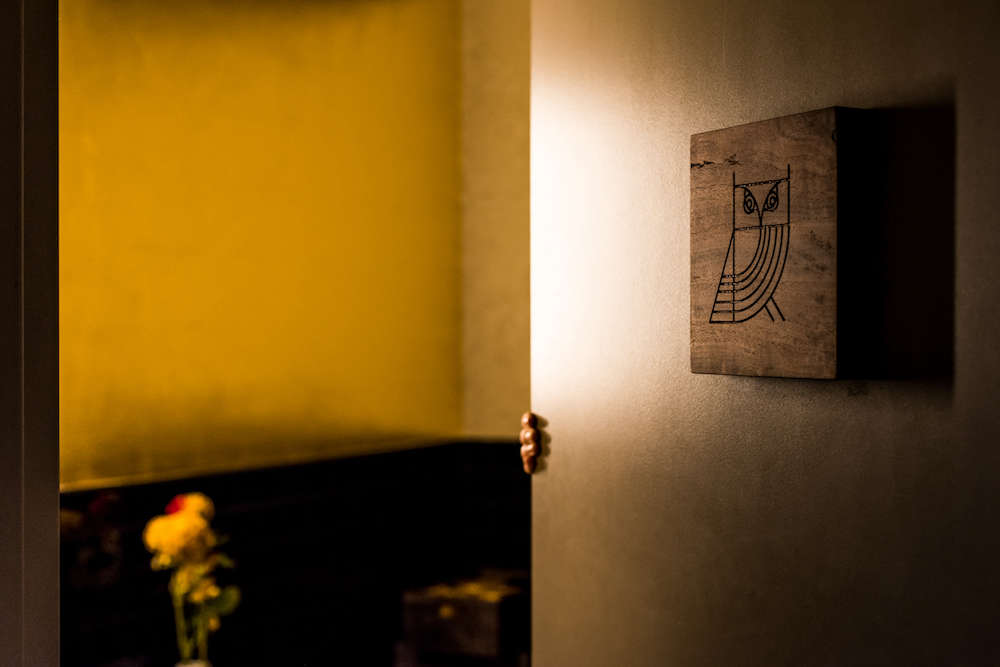 Above: Each unisex bathroom sports a wood panel with Nightbird’s owl logo. “To me, bathrooms are important,” said Alter, “so I wanted to have towels and candles—and I jumped through some hoops to get to use Aesop soap in there.” 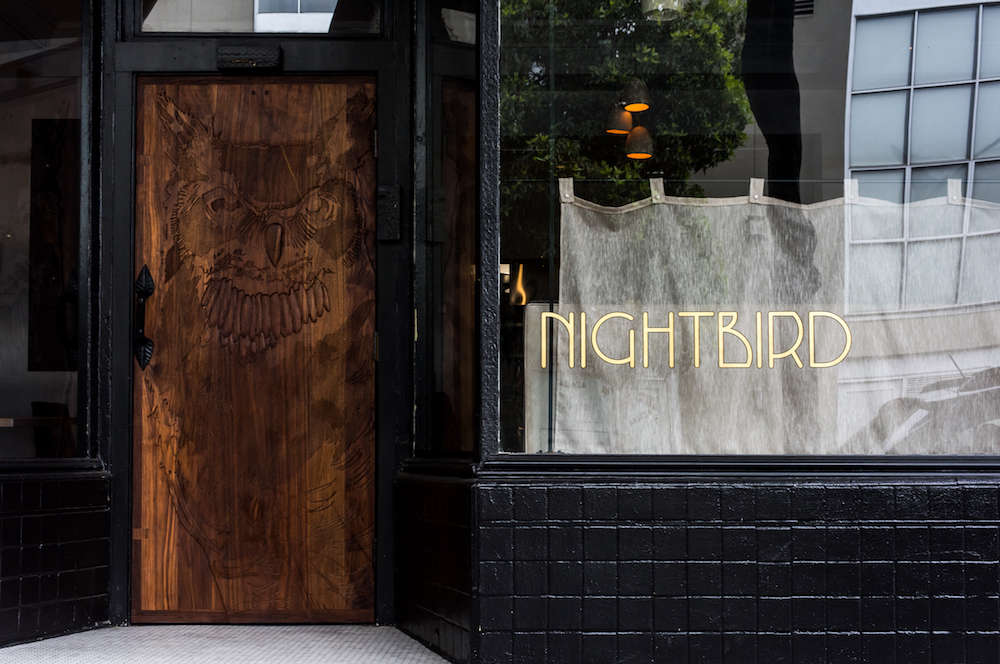 Above: Alter couldn’t change much of the historical building’s exterior, but she painted it black and added a custom-carved wood door. “When the contractors came to me with the price for a plain door—and it looked like it could be a door on any house in Menlo Park—I said no way.” 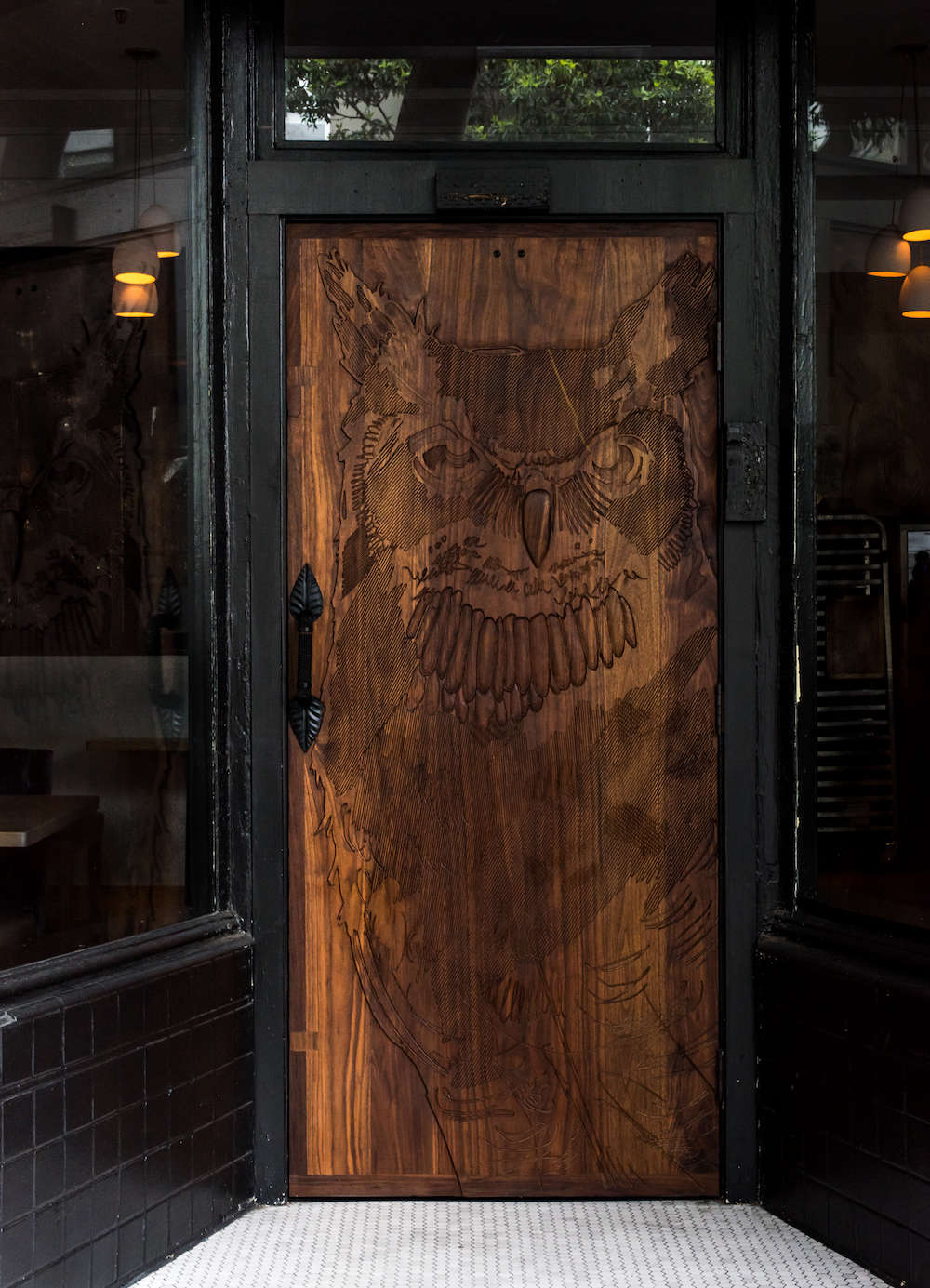 Above: Alter gamely created a Pinterest account to benefit the project. “I had never pinned anything or even heard about Pinterest before this, but everyone wanted a board of what I was thinking,” she said.

Pinterest led her to a door design she liked, and the next day a tenant above the restaurant stopped in to offer his woodworking services for any potential furniture needs. “It was fate,” said Alter. Her friend Michael McConnell drew the bird and woodworker Tyler Bradford made the door out of solid walnut. 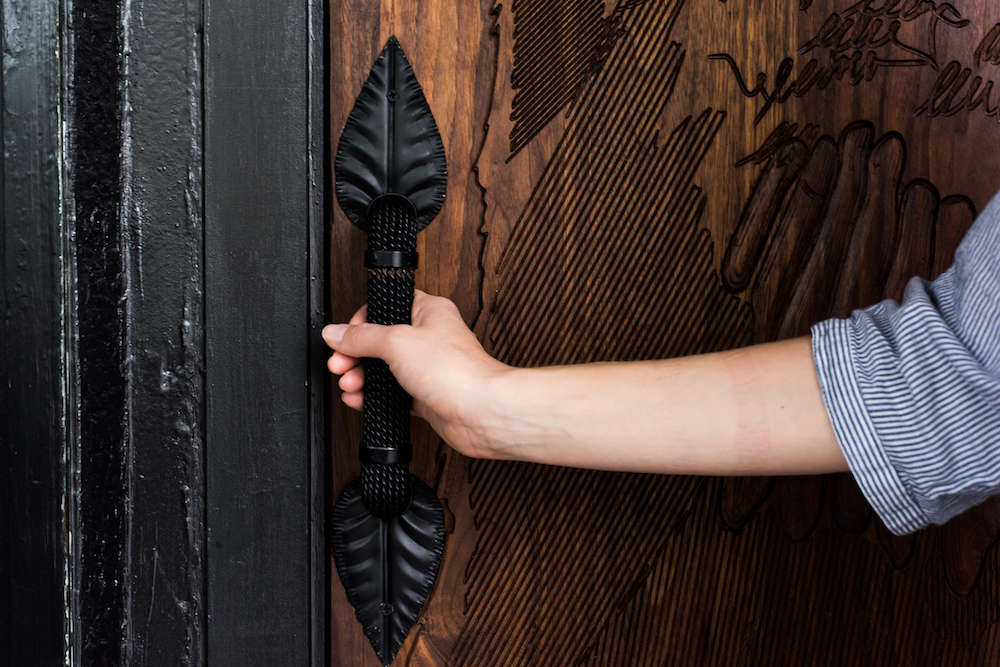 Above: Alter had the door handle custom forged by a steel worker in Germany. “The leaves tie it into Linden Room.”

“One scratch or one spray of paint could ruin” the door, said Alter, so staff board it up at night. And Bradford continues to care for his work: “He comes downstairs and cleans it every two weeks and I give him a drink.” 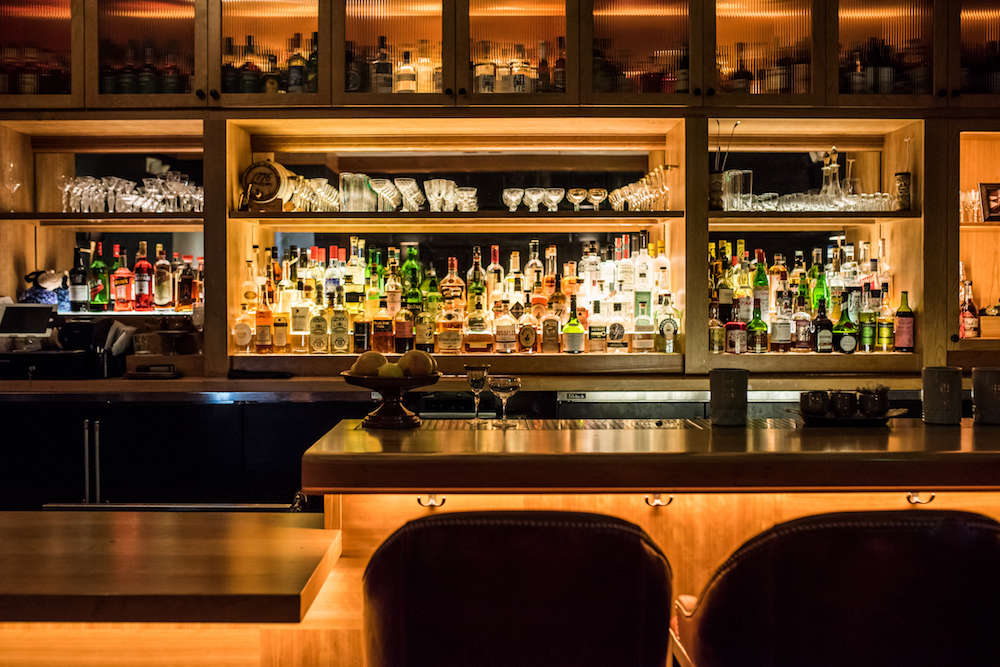 Above: Around the corner, on Linden Street, is the entrance to Linden Room. (It’s attached, so diners can walk from the bar to their table, but it also functions as a stand-alone outfit.) For the decor, Alter took her cues from Angel’s Share bar in New York—”It’s not pretentious,” she said. “It’s nothing other than you getting a good drink in a decent setting.” 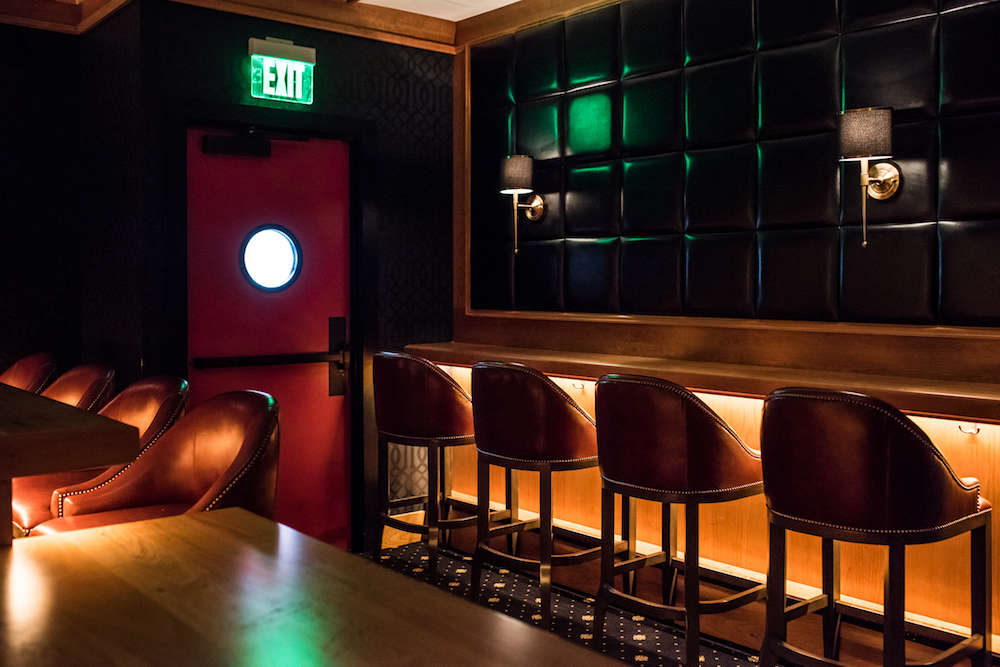 Above: “I wanted a very specific vibe,” she said. “I love old hotel bars, and that’s where this went.” The bar and counter are made of cherrywood.

Remodeling 101: What to Know When Replacing Your Washer or Dryer