The architecture of New York-based firm Ogawa/Depardon Architects (a Remodelista Architect and Designer Directory member) has a quiet, assured confidence; perhaps it's because the principals trained at two great iconic American architecture firms, Skidmore, Owings & Merrill and I.M. Pei and Partners. Begun in the mid-century, both firms represent the postwar idealism and enthusiasm that swept across the country last century; a heady moment for architecture when artistic influences from Europe (think Walter Gropius and Mies van der Rohe) were mixing with new technological construction advances in the US.

It seems fitting then that Kathy Ogawa and Gilles Depardon would work on the renovation of one of Carl Koch's first Techbuilt Houses, assembled in 1956 from prefabricated panels in only three weeks. A pioneer in prefabrication technologies, Koch believed that prefab housing systems were the way forward in accommodating America's post-war housing shortage. This particular Techbuilt House in Tuxedo Park, NY, was in such a state of disrepair that the architects had no choice but to gut the interior. Respectful of Koch's original design intent, especially with regard to the structural system, the architects have skillfully adapted the house to 21st century living. 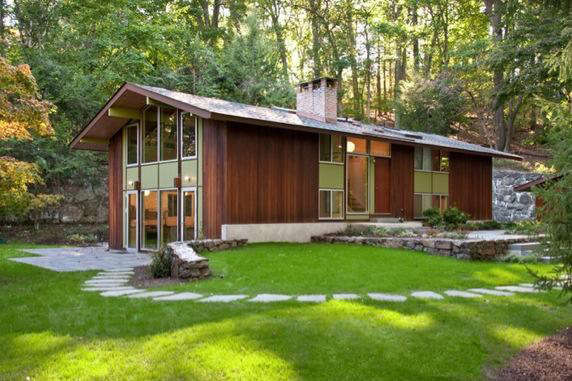 Above: On the exterior, the original redwood siding, a material that is resistant to insects, mold, and rot, had held up well while the infill panels needed replacing, allowing the architects to add a new color. 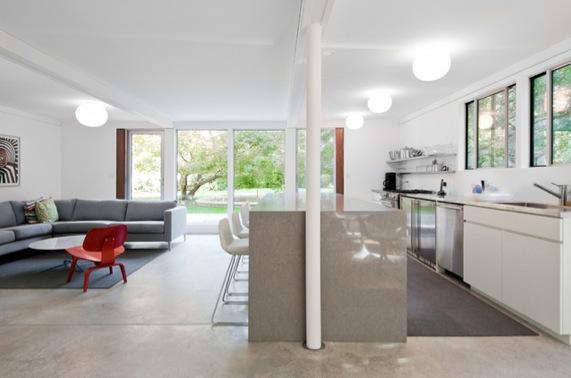 Above: The architects created an open plan living area by removing a wall that originally enclosed a family room and replaced it with one column. The light was also maximized by replacing the existing plywood walls with painted sheetrock. 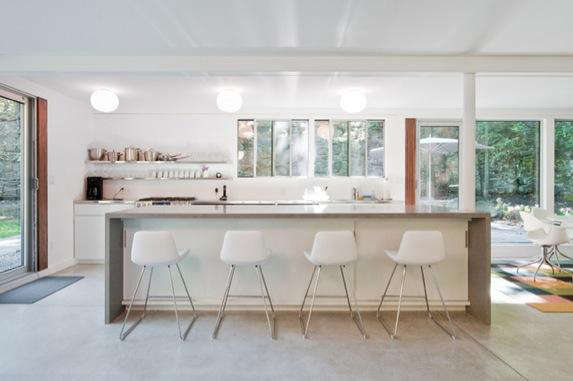 Above: The architects installed a new kitchen complete with one of their signature kitchen islands. While the original floor was concrete, a new concrete floor with a radiant heating system, which is heated through rooftop solar panels, was installed. 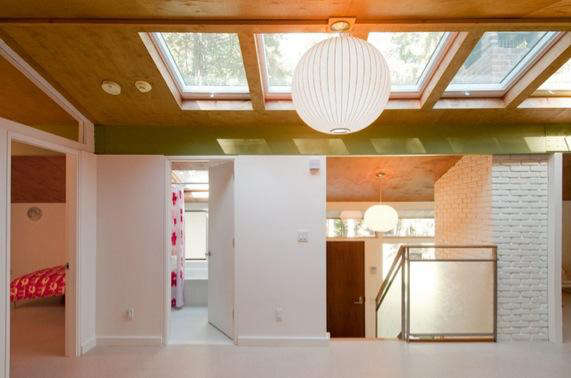 Above: The skylights, translucent stair rail made from Japanese rice paper sandwiched between two layers of glass, and transom widow into one of the bedrooms are all new. 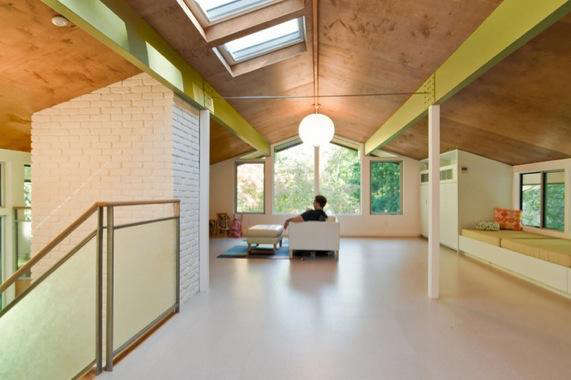 Above: The architects kept the original post-and-beam frame structure intact, painting the beams a highlight color. The roof, with its original four-by-eight-foot modules, remains, but the ceiling is now faced with a stained birch plywood that is lighter in color than the original mahogany ceiling.