“I like to get very hands-on with my projects because I believe as an architect we have to engage more,” says Ben Daly. “Currently, it’s just me that does 95 percent of absolutely everything.” By everything he’s referring to not only his design but construction work. Ben came to his profession as someone “interested in understanding how things work.” After earning his architecture degree at Auckland University in his native New Zealand, he worked for firms in London and Sydney designing community buildings, art galleries, and competition entries. Back in New Zealand and wanting “a new challenge that allowed me freedom to make what I wanted to make and learn what I needed to learn,” he established his own one-man practice, Palace Electric.

So far, Ben’s converted three industrial structures into living quarters, all for himself, his wife, Dulia, who is currently finishing up her training in orthopedic surgery, and their toddler, Hattie. Ben and Dulia’s first apartment was in a former car mechanic’s garage. Next, he transformed a rail car into their home. And most recently, he domesticated a sheep shearing shed in rural Canterbury, just south of Christchurch. By selling or renting the last project, he’s been able to pay for the next (he also teaches design at his alma mater). We discovered Ben’s work via New Zealand designers George and Willy, who, in their Customer Profile, describe the family’s latest home as “inconspicuous on the outside, and inside, a labor of love that celebrates craftsmanship.” Come see.

“I find there’s a lot to be gained from these humble buildings and I’m really enjoying teasing whatever it is out of them, almost like they’re a part of my design tools,” Ben tells us. “Waste is also a factor; it’s something architecture often has a lot to answer for. At the moment, I’m enjoying the ‘Don’t move, improve’ and ‘Don’t build, rework’ movements.”

The opaque ridged sheeting on the walls and skylights is polycarbonate, a light-weight, heat-resistant, recyclable material. Ben likes the way it mimics the old corrugated steel on the exterior, and the fact that, in lieu of adding new windows, it fills the space with soft light.

“The main undertaking was to make it clean after 60 years of sheep use, and then to make it watertight,” says Ben. “But the big issue, of course, was to get it insulated as these spaces are just tin lined.” While carefully preserving the exposed wood and steel framework, he used a combination of batt and recycled foam insulation, and there’s double insulation under the kuring plywood floor.

“The sheep were held on this side of the wall in three pens,” explains Ben. “They were taken through three gates to the other side where two people would shear them. Once done, they’d be led down ramps on the other side of the shed.”

Ben further explains: “The shed has a long facade, with the living room and both bedrooms facing north, which maximizes heat gain. It’s raised 1.2 meters off of the ground, which stops transference. Through good insulation, materials, and construction, I’ve tried to move the thermal bridge of the building as close as I can to the exterior skin of the building. The only heating that it needs is the fire, which gives a very strong punch.”

Above L: “I like the idea that things have multiple uses: a wall becomes a bed and bookshelf on one side, and hanging wardrobe one side, the other, ” says Ben. Above R: A homemade peg and hanger. 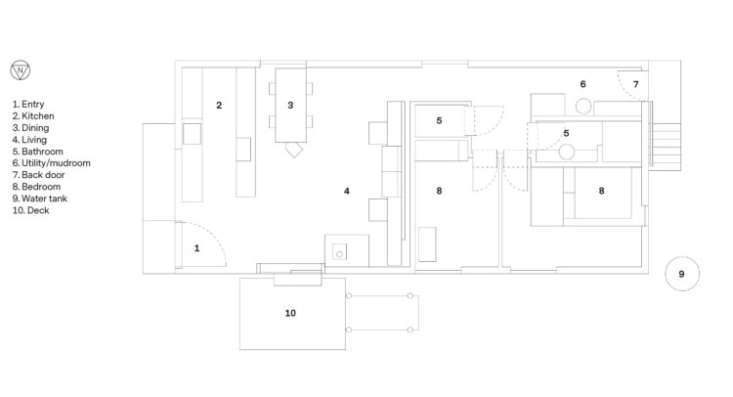