When our Oakland-based architect friend Ian Read of Medium Plenty told us about his firm’s latest project, Neighbor, we went shopping. How could we not? A

curated shop of artisan and vintage pieces for the home and garden, Neighbor is a partnership between two community-minded Oakland aesthetes. 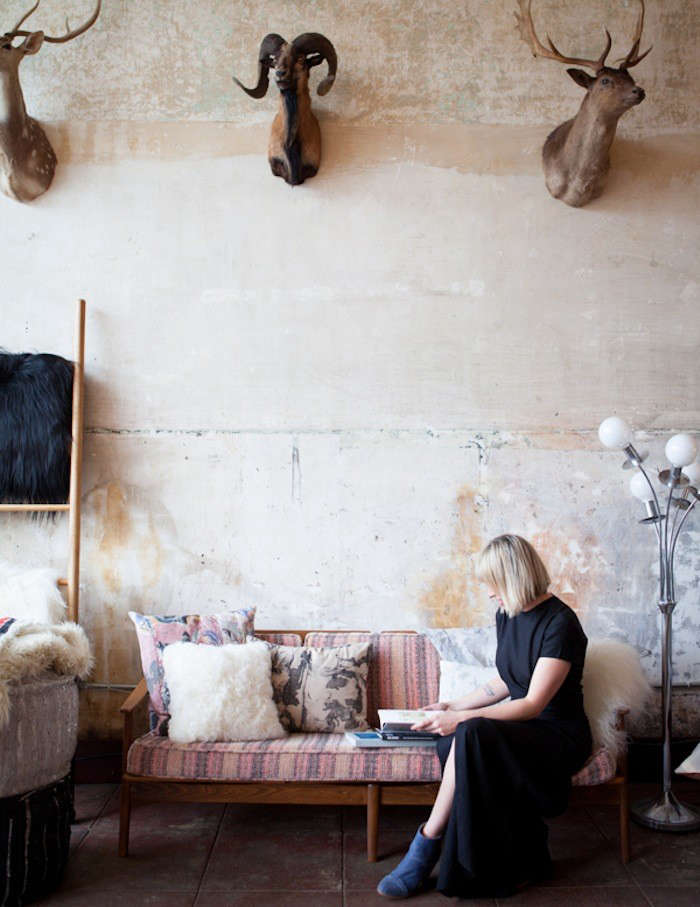 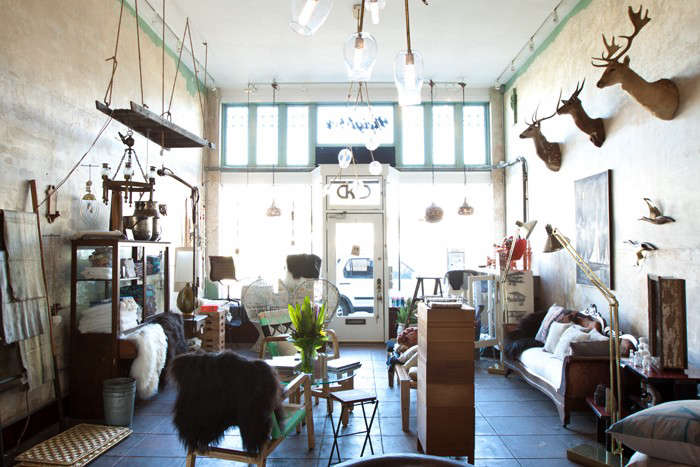 Above: Neighbor is on Piedmont Avenue, a shopping and eating district of North Oakland with a big local following. Olson and Anderson are keen on turning Neighbor into a hub of creative activity: “In addition to the storefront, Neighbor will have an outdoor section with garden furniture and accessories,” Olson says. “In time, we’ll host workshops on dyeing, weaving, planting…we’ve got lots of ideas brewing.” Photograph by Josh Bettenhausen. 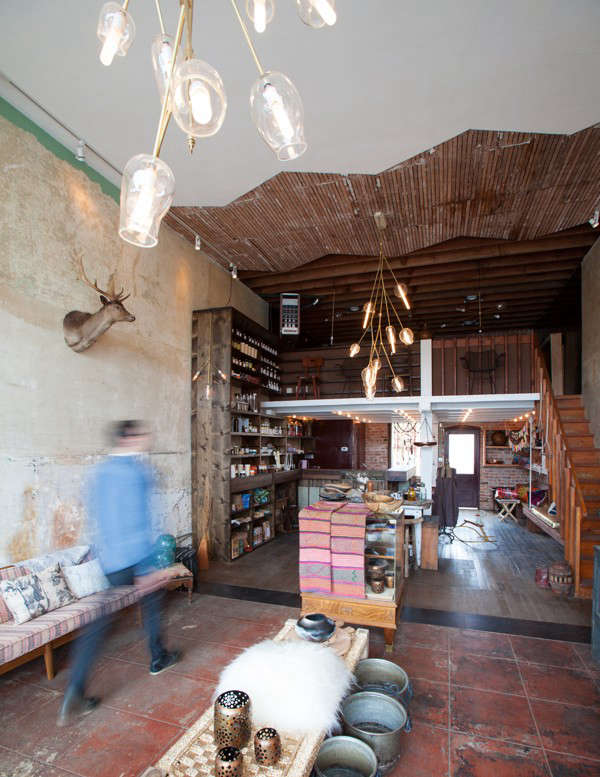 Above: The space was redesigned with a light hand to maintain the character of the place while giving it a new life. Medium Plenty’s treatment of the finishes was an exercise in reworking what was already there. For example, in the front, the designers removed a layer of linoleum to reveal a concrete floor. The concrete was then stripped and scrubbed to reveal its original brick red paint. In the back, the wood floor was patched with reclaimed flooring that was given a gold wash to highlight the restoration. To ease the transition between the two floorings, the designers inserted a raw steel strip. “We like to think of it as a new store in an old building,” says project architect Sky Lanigan. 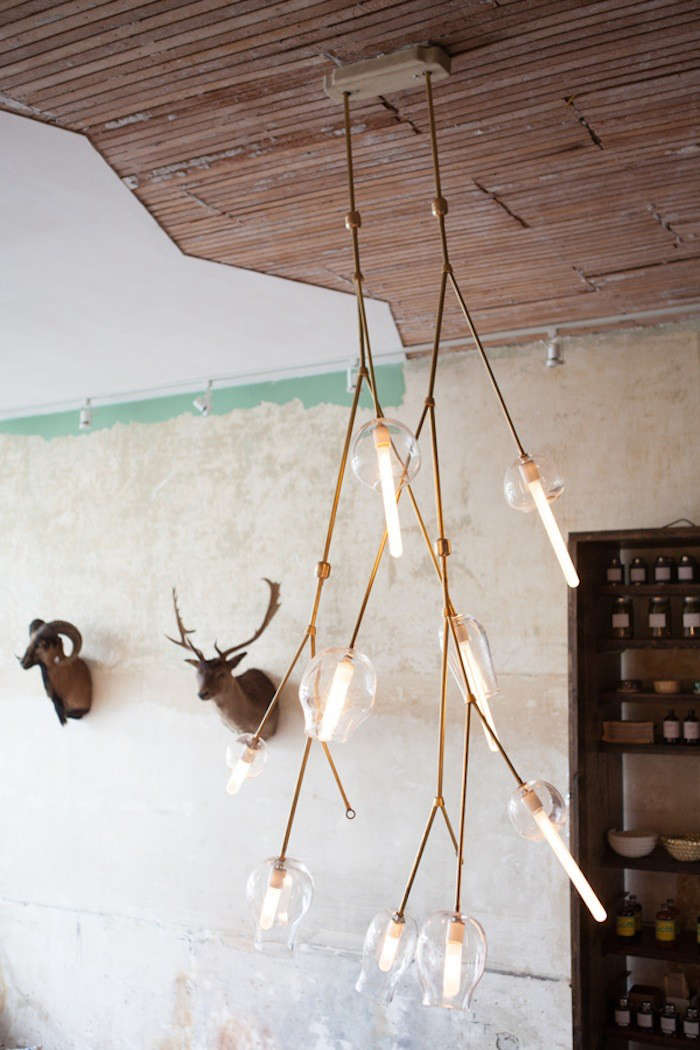 . “We’d love to take credit for this, but in truth, the contractor and the owners came up with the idea,” Read says in the spirit of community. “We did, however, design and build the chandeliers. We sourced the parts from Grand Brass in New York and assembled them in our office.” The organic glass shades were handblown by local artisan Michael Meyer. 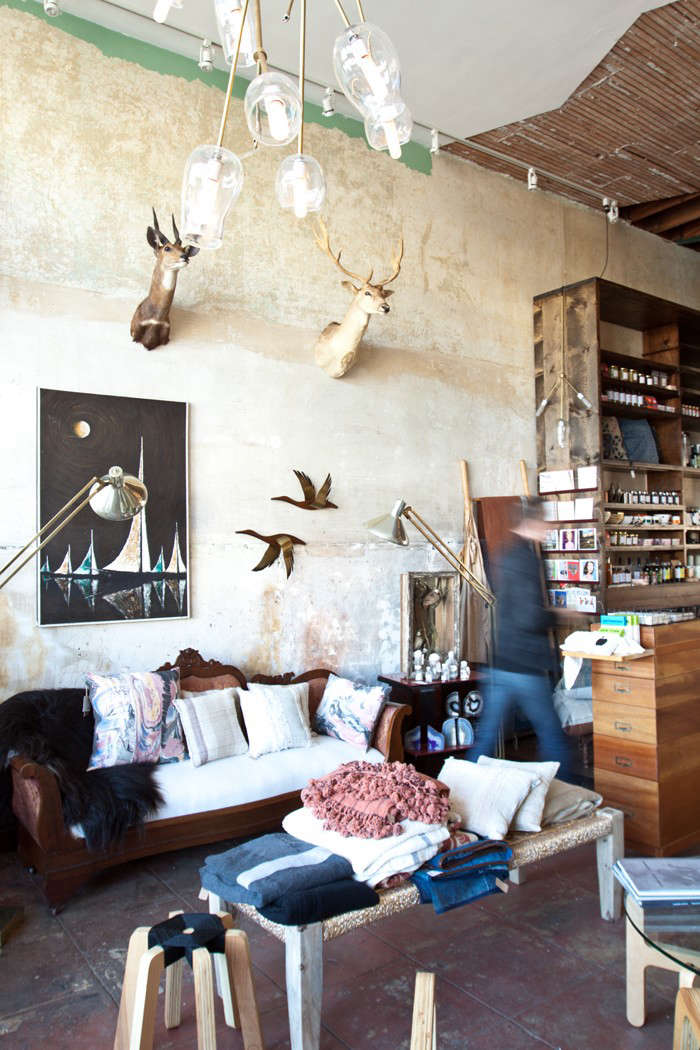 Above: An African bushbok antelope and blonde fallow deer from Gold Coast Artifacts are mounted on a wall stripped down to its original plaster almost to the ceiling–the architects left a hint of the 1970’s green paint as a reminder of what used to be. Midcentury wood and brass birds hover near a sailboat painting from the same period. Photograph by Josh Bettenhausen. 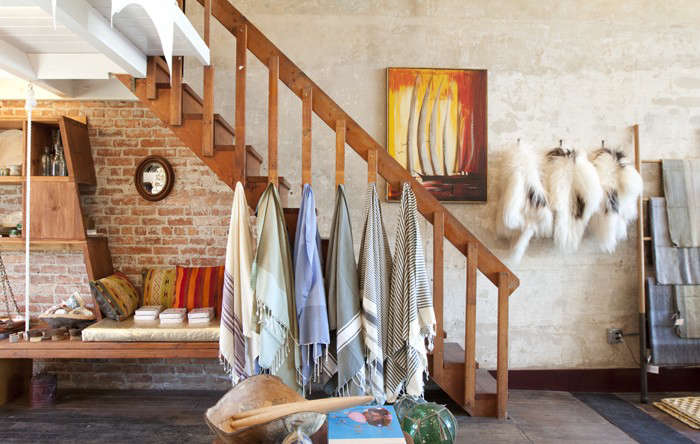 Above: “The steep stair and mezzanine were existing, and we built on their texture by composing grids of wood tones with new shelving, guardrails, service counters, and a suspended bench,” Lanigan says. The stair rail provides a handy display for a lineup of Turkish bath towels. Photograph by Josh Bettenhausen. 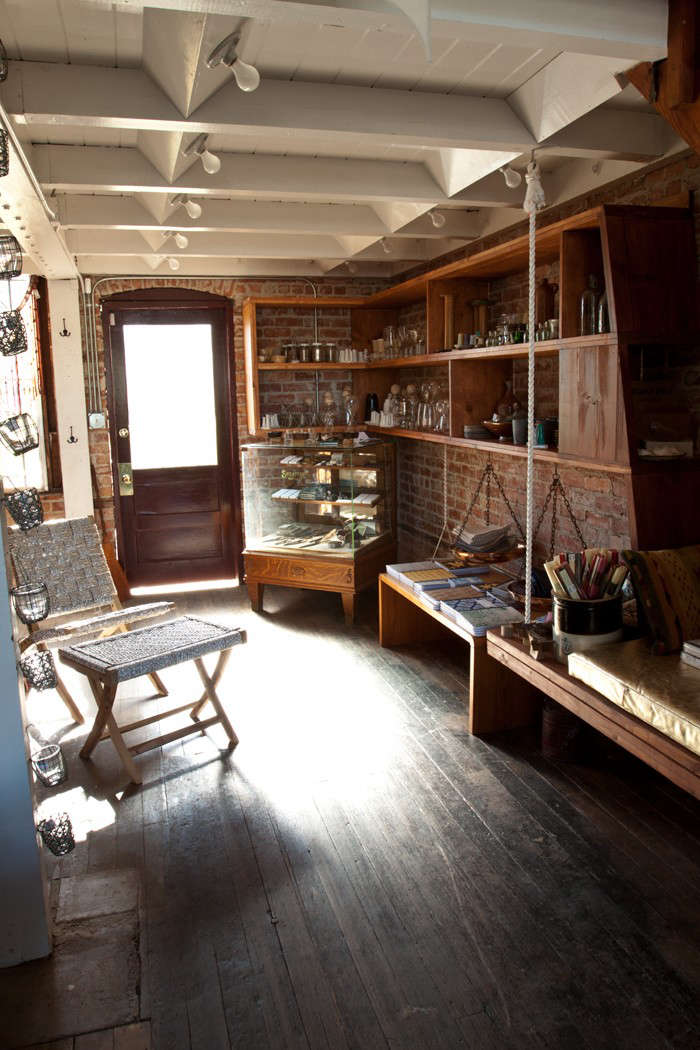 Above: Under the mezzanine, the designers exposed the brick in the wall to add texture behind the open shelves. Simple ceramic bulb socket bases with standard bulbs installed at an angle create a grid of “glowing raindrops.” “The whole assembly reminded us of carnival lighting, albeit a stylish carnival,” Lanigan says. The silver mesh chair and footstool are entirely made from recycled materials by Studio Salvage Craft. Photograph by Josh Bettenhausen. 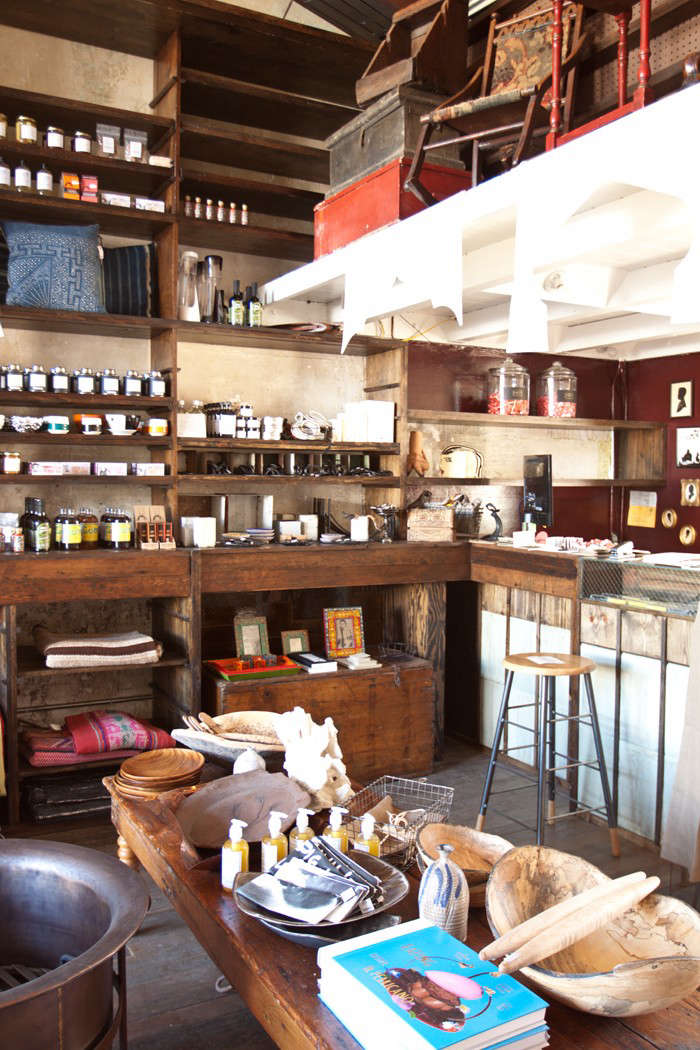 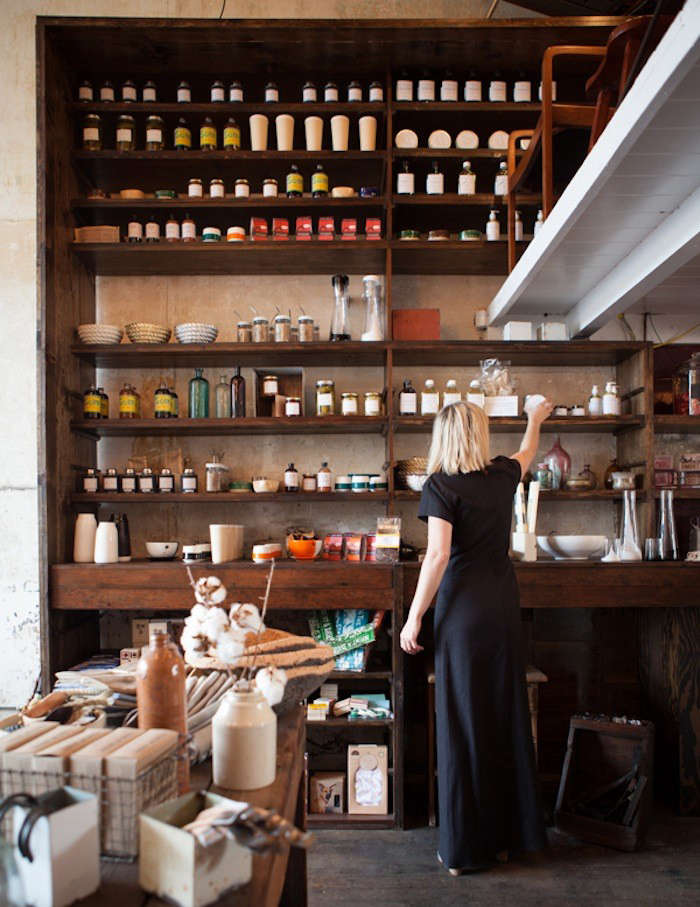 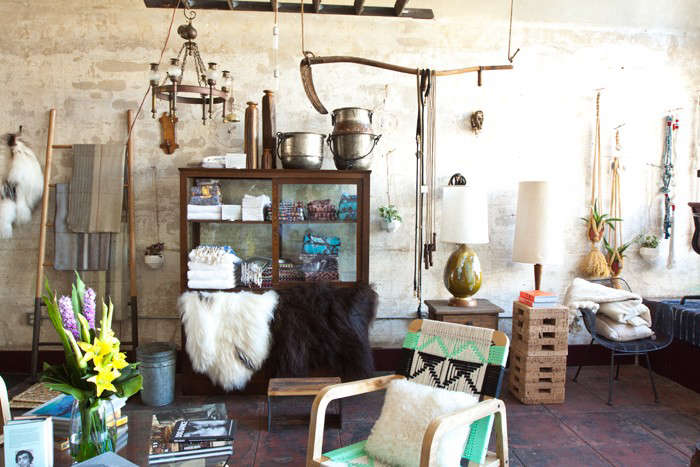 Above: The store has an inviting ad hoc look. Hanging from the rafters: a vintage brass chandelier and a scythe that’s both decorative and used for display. Photograph by Josh Bettenhausen. 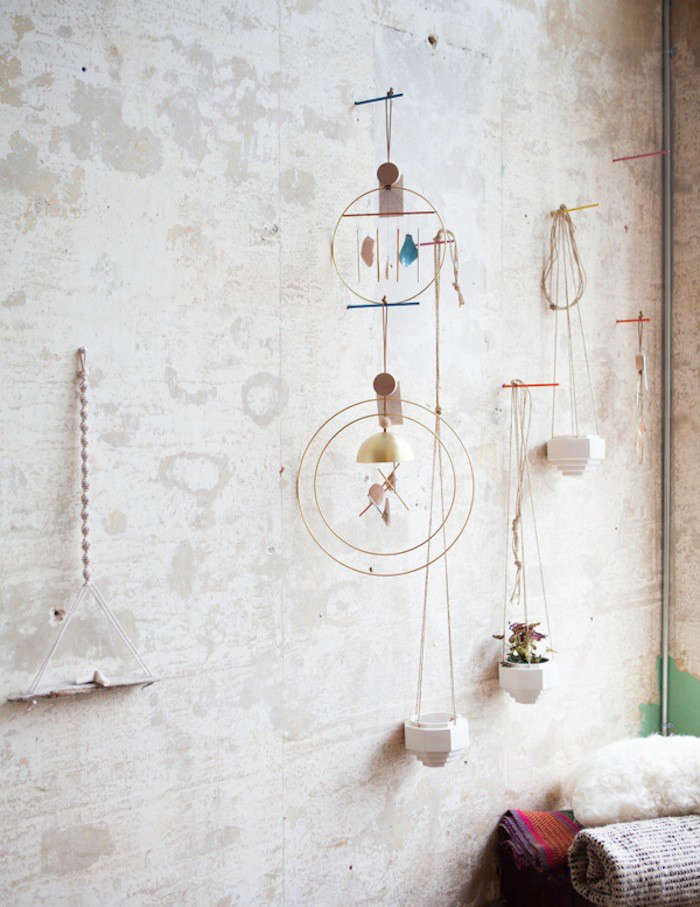 Above: A constellation of existing holes in the plaster wall anchor multicolored rods inserted for displaying planters made by local artist Peter St Lawrence and chimes from Seattle studio Ladies and Gentlemen.

For more Oakand design, tour Ian Read’s own home in A Budget Remodel with Heath Seconds and Christi Azevdo’s revamped Carriage House. And over on Gardenista, stay healthy with herbs from Oakland’s Homestead Apothecary.

Below: Neighbor is at 4200 Piedmont Avenue in North Oakland.

12 Ways to Warm Up Your Electronics