Karen Ong and Michael Reich met as students at Harvard Business School. She grew up in Manila, Philippines, he grew up in Bavaria, Germany, and, in addition to sharing a love of travel and learning languages, the two are devout minimalists: “We are mad about keeping everything clean and serene in all aspects of our life,” says Karen.

Shortly after graduating, the couple launched the language-school clearinghouse Language International, and when they decided to move their company from Boston to Berlin, they had very specific ideas about their new living quarters.

Karen and Michael found what they were looking for minutes from their Mitte headquarters: a newly constructed garden house set in a green courtyard in Prenzlauer Berg, “the best-preserved prewar neighborhood in Germany,” Karen says. A developer project designed by Eike Becker Architekten, the structure was merely a concrete shell—and that was one of its biggest appeals. There was an option to continue working with Eike Becker on the finish, or to purchase it as is and fill in the details, such as walls and flooring, as they wished. The couple opted for plan B (“Eike Becker’s proposed layout was very standard; we wanted something different”). Here’s the story of what unfolded—and a look at the results (scroll down to see the exterior and before shots).

DesignYouGo responded by creating open-plan spaces entirely devoid of hardware and decoration, but finely detailed: The white glow of the polished concrete floors, for instance, was achieved by adding Carrara marble to the mix. There are three stories—a total of 155 square meters (approximately 1,668 square feet)—and the ground floor, shown here, is devoted to a dining/kitchen/hangout room.

The interior work took 10 months. Thrilled with the results, Karen and Michael furnished the spaces very sparingly and in all white. But even minimalists don’t like chilly. And so, realizing they needed a new tack, the couple called in a third crew, Loft Kolasińki led by interior designer and Eastern European vintage specialist Jacek Kolasińki, to perform the final finish: “We asked Jacek to add warmth to the house without losing its purity.”

The cabinets and counter are faced with Corian in Telegrey 4, and the walls throughout are painted the same soft gray. The table and chairs were originally white (to see, scroll to the end) and the windows curtain-free. Loft Kolasińki swept in: two months after Jacek’s first meeting with the couple, all of the new furnishings arrived, including this Oak Table with Bench (one of his own originals) and a set of Swiss designer Willy Guhl’s 1960 oak chairs, plus gray linen curtains.

The two so enjoyed the process of pulling together the house that in their spare time, they’ve also started buying and furnishing apartments in Berlin and renting them.

“Aesthetically, the glass stair visually connects the floors of the house into one unified space,” says Karen. Finding the right glass, she notes, was tricky: “The thicker glass gets, the more it takes on a green hue. DesignYouGo helped us select the best lead-free, low-iron, crystal-clear glass—with no green hues to it.”

It’s here that Loft Kolasińki introduced some color to the house: the bentwood chair (with its original red caning meticulously preserved) and pale-pink-topped table are rare 1960s pieces by Czech modernist Miroslav Navratil designed in collaboration with architect Zdeněk Plesník for Plesník’s own flat. The green rug is a vintage Antonin Kybal design.

The DesignYouGo team fitted out the room with a concrete tub and sink of their own design. Creating it involved building an acrylic mold on site and then pouring the concrete, a job done by Jonas Kock and crew of Accidental Concrete: Check out DesignYouGo’s video of the process. 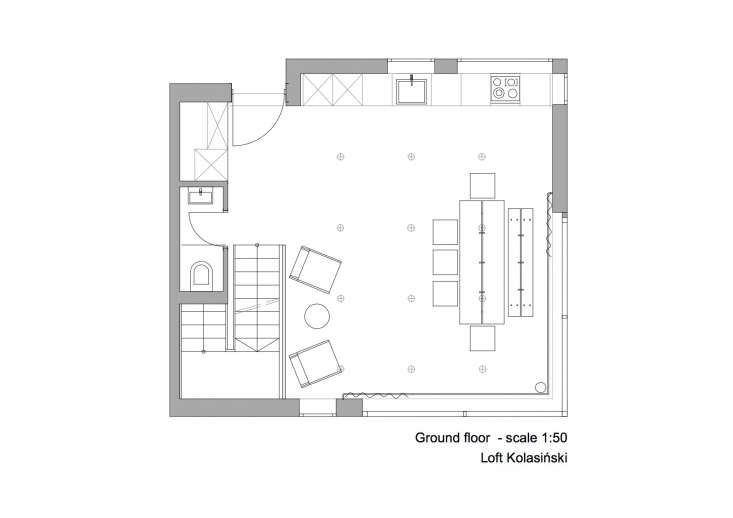 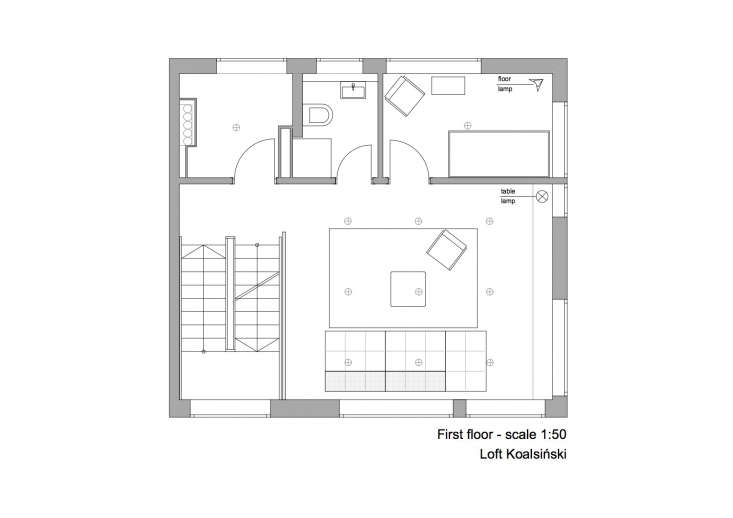 “The purchase price included a certain allowance for renovation to get it to a finished state (a per-square-meter budget for the floor and other elements),” says Karen. “But we had the flexibility to choose anything we wanted. If the price exceeded the budget, we just needed to pay extra. The developer worked with our architects on the finish.”

Go to A Sexy, Minimalist Remodel to see another Berlin project by Loft Kolasińki. And browse our Minimalist Archives for more.

Thinking of living with concrete? Learn all the pros and cons in:

Eco Textiles: A Paris Workshop That Creates Subtly Dyed Goods for the Home

“Poor but Sexy”: An Inspired Project in East Berlin that Honors the City’s Artistic Spirit

Kitchen of the Week: A DIY Ikea Country Kitchen for Two Berlin Creatives

Kitchen of the Week: A Poetic Apartment Kitchen by Studio Oink